Please note: this post was made in our fiction category. The details of the story are purely contrived for the purpose of conveying educational content to our readers. Any resemblance to real persons, living or dead, is purely coincidental. Describing such an event is something we can all learn from. (Stock helicopter photo from Pexels.) 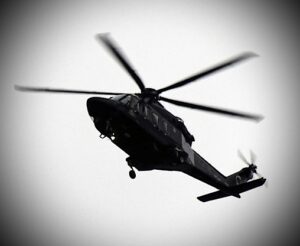 The helicopter rising up and away, growing smaller in the distance, the loud hurricane-force winds no longer making us wary of weak tree limbs above our heads. Thank goodness for the Air National Guard, else the patient would have needed to be carried off the mountain in a litter and we were just below treeline. This case, as they often are, was urgent, too; time being of the essence. The patient had hypothermia, was pretty bad off, and needed a controlled re-warming — stat, as they say on TV. Hopefully he turns out okay.

As the whump-whump-whump of the helicopter faded into silence as they medivac’d the patient to the nearest hospital, I begin to look around, taking inventory of my team and looking for the Fish and Game’s Scene Commander. He was talking to a hiker, a bystander it seemed, so I walked over hoping to get more details. We knew what happened on a basic, biological level: our patient got too cold and his core temperature dropped to a dangerous low. We didn’t know why, however… well, maybe we did, in an off-hand way. We’ve seen it so many times.

The patient’s name was Jonathan, age 46. We knew this from his ID. The bystander, her name Susan, also confirmed this having run into Jonathan before the incident became an incident, and again afterward. She is the one who called 9-1-1 (on their second meeting). Their first meeting — Susan being a trail runner — was when she passed Jonathan on her way up. She didn’t usually concern herself with other hikers, but when she saw him, “looking so out of place,” she slowed, then stopped, pulled out her ear buds, and casually asked him where he was headed (dressed in a t-shirt her mind added). To the Crystal Cascade he said, pointing behind him (it was about a mile back) and now just going for a stroll.

He said he was going to “Mt Tuckerman” or “Washington Ravine,” she told us adding air quotes. He was using some app on his phone and it was a bit unclear so he wasn’t sure, plus HE forgot what the signs said. He hiked in what he called a dry stream bed full of leaves. He noted it was a warm day at the base, and was warmer still as he climbed. Susan informed him that he was almost to the Huntington Ravine Trail junction on Mt Washington and not to go that way. She also added that it was really cold the higher up one goes, suggesting he turn around before going too far up trail, dressed so lightly as he was, adding that mountain weather is predictably unpredictable.

The spring and fall can offer remarkably and sometimes surprisingly colder temperatures at elevation. It’s all part of nature’s trickery.

But Jonathan missed the point of the comment. In his mind the unpredictability was that the weather was getting warmer as he walked, not colder. It didn’t occur to him, lacking hiking experience, that his warmth was being generated by exercise and that he was even wetting out his cotton layers a bit with sweat. He was about to find out, though. To his credit, he wouldn’t take the Huntington Ravine Trail, as suggested, but he would keep going. Eventually he would reach the Lion Head Trail and opt to take that way. Susan wishing him luck, put her ear buds back in, gave Jonathan a concerned look followed by a wry smile, and continued on her ascent. She secretly hoped in her mind that she would not see Jonathan slumped over, in trouble, dead, or frozen on her return. One can only hope!

At this point we can only speculate what happened but over an hour and a half later Susan dropped back below treeline on the Lion Head Trail having taken on Mt Washington and further grabbing Mt Clay on her weird loop/out-and-back. The day was beautiful, not too breezy, though very cold. She stopped before crossing the now-desolate Auto Road on her return from Clay to drop down to the Alpine Garden Trail. There she stopped to fuel and was quickly shivering. She solved this by devouring a “power bar” and getting back in motion southward. She could have also added a layer or two but this would work. Her kit was lean, but better than Jonathan’s by a mile. She wondered about him again.

Upon turning around toward the south just below treeline back on Lion Head Trail Susan spotted Jonathan slumped over on the trail. She had hoped this would not happen, but here he was, balled up, hugging himself tightly. Still alive but not coherent. Barely pain-responsive. Beyond the violent shivering stage. Susan was a regular hiker and trail runner and had even taken a medical training course. She knew from that class that this was not a good situation. She cursed herself for not being more stern with him. She could have possibly prevented this. She put a spare layer on Jonathan and called the authorities. Then waited. She wasn’t exactly sure if she should try re-warming him, but she also knew she wanted to keep him from getting colder. It was freezing out so without exercise and fuel, Jonathan’s life was actually in peril. 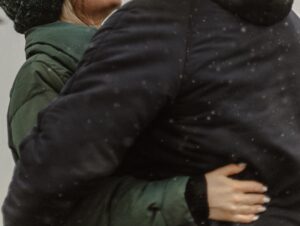 She put her arm around him. Together they waited for help to arrive.

The scene commander shook his head. “This was so preventable,” he grumbled, speaking to no one in particular. Susan and I both nodded, however. “We need to get stories like this out there so people will learn,” the commander added.

This was something I could do, I figured to myself. Not in a true story. In a true story Jonathan might have died. But in a story where Jonathan makes it to the hospital, they warm him up, he doesn’t have brain or organ damage, and topical freezing is actually minimal, and he lives on to grow older and be wiser, better than before.

And in this story, since we can take all the liberties we want, let’s also say that Jonathan sends Susan a nice post card saying thanks, plus he makes a sizable donation to the search and rescue people because… well, he can.