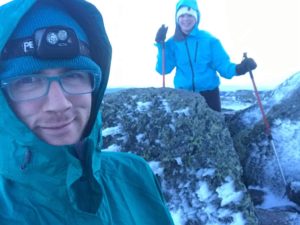 The author, “The Teal Goat,” in his happy place.

There is a lesson to be learned. Accomplishment leads to confidence, and that leads to greater comfort, and from there complacency is a close neighbor. It’s a neighbor we can stumble onto quite easily if we’re not careful. We want to respect this neighbor and give complacency a wide berth. To remain aware of ourselves and the fragility of human life.

The story below was penned by Adam Kateri Mooshian and is based on his own personal experience. A recent experience. With great kindness and with unselfish courage, Adam has chosen this medium to share his story with our readers in hopes that others may learn vicariously through his close call.

Here is his tale…

Hello darkness, my old friend, I’ve come to talk with you again…

Perseverance (or maybe stupidity) is continuing on despite a mounting desire to quit.

I had this crazy idea last winter. To attempt to summit all forty eight of the NH 4000-footers in a single winter — a feat also known as a “Single Season Winter” or “SSW.” It’s a lofty goal that requires a healthy dose of great weather luck, time off, endurance, and stepping outside of one’s comfort zone. Quite a bit of the last had been done to date; so wanting to up the bar on the Tripyramids, my familiar friends, seemed like the perfect idea. An opportunity to push myself a little further.

February 11th did not start as a normal hiking day, but instead it was a normal work day. I did my hiking prep watching Hallie on WMUR tell me what to expect that night. Anyone that hikes with me in the winter knows I love my pepperoni and cheese, and I was slicing up the finest the Market Basket deli had to offer for that night. With that, off to work I went, arriving with my pack and clothes strewn about my cubicle. The boss knows at this point not to question. Just a nod, reflective of either “have fun” or “you’re crazy” — or both.

It was just another day of running around a construction site for me. Nothing major, and after my eight hours, I hopped in the car and drove 2.5 hours north to old favorites of mine: the Tripyramids. These two were in the twilight of my first round of the 48 and left a positive impression on me. Tonight I would be taking Pine Bend Brook Trail out and back, a trail I had done a handful of times. Feeling good mentally and feeling confident, the ride went quick. Lots of zoning out and dreaming about soon finishing the Single Season. Grabbing a coffee for the caffeine bump, I neglected to get food. I was feeling fine, not really hungry, just anxious to get on the trail.

I quickly found myself out of food options even if I did want to force something down. I found myself on the Kanc [Kancamugus Highway, Rte 112]. Driving a MINI Cooper, the delight of the twists and turns at… oh, whats the speed limit again?, distracted me and in short order I found my at the trailhead. It was just before sundown. I shoveled out a spot in the snowbank on the blind curve and pulled the MINI way up in the bank. Camouflage.

The conditions at the trailhead were perfect. 14 degrees Fahrenheit, a waxing gibbous moon that illuminated the snow as if it was a night light, light winds, and hundreds of twinkling stars. The forecast for the ridge was about 10mph winds and single digits above. Ideal. Lets do this, I said to myself.

I excitedly snapped a photo of the sign on the highway at 5:54PM, hopped over the snowbank, and began to tear it up. From the trail report from the day before, I knew the trail was a frozen super highway — and it was! Far easier than in summer. All the more reason to try and push it. The caffeine was kicking in. Send it! 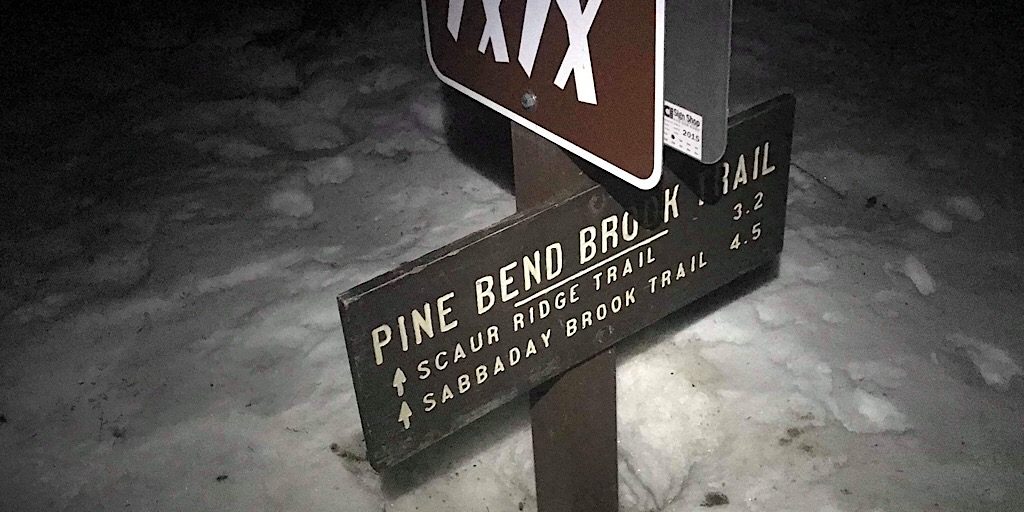 Signs of trouble? Maybe on this night the answer is yes.

It was one of those hikes. You’re feeling so good you start to ignore the signs. Why am I cold? Am I wet? Why am I feeling like this or that so soon? At 6:48PM I reached the Sandwich Range Wilderness sign. While taking a selfie, I knew then something was seriously wrong but the childish smirk doesn’t tell the tale. For someone who runs furnace hot, I was confused as to why I was feeling cold so early. I took the light shell out of my pack. My fellow hikers always get a kick out of how big it is. It’s just a 34 liters but it looks huge on my 5’3″ frame, and I was glad for all that was in it that night. I threw it back on and resumed my far-faster-than-normal cruising speed. There was a feeling of somewhat euphoria. My personal record was on track to be absolutely shattered tonight. Send it, I said again. 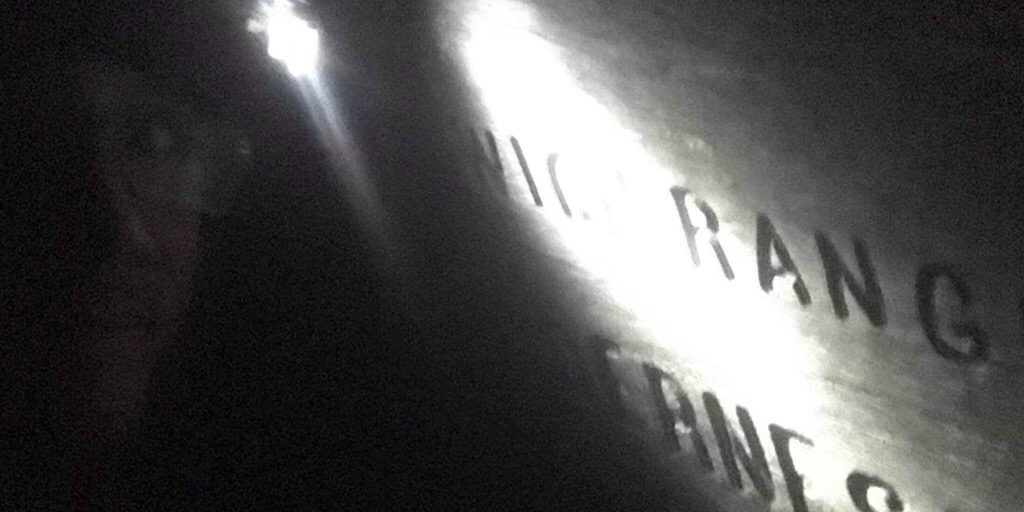 After several hop, skips, and jumps across the seemingly never ending stream crossings, the first real challenge of the night appeared. Bathed in head lamplight there was the steep ascent up right after the drainage crossing. Ascending this in the dark was quite an interesting and difficult task. I made a joke to myself on the way up about how if I thought this was hard, wait until I have to go down it. In short order the trees offered protection again from a 30′ fall. They where like arms offering a welcoming hug back. I still felt off, but couldn’t put my finger on what it was. Was I cold, wet, both? At the height-of-land where you would divert off to grab The Scaur, I decided I needed to do something. It’s hard for me as a solo hiker to stop, I detest stopping because it kills my momentum. Stopping briefly, though, I ate as much sugar and salt, and drank as much as my body would allow. It knew it would be a few minutes before I felt better, and knowing the ridge was close and then it was a quick out and back to Middle, it would be a confluence of a morale bump. It’s now or never, lets do this.

Winter is a fickle beast. Working outside infinitely helps with the acclimation process to the cold. I am one of the crazy folks who take delight in the cold temps. Tonight was one of those nights I still did not think was ‘cold.’ Being alone on a ridge at night in the Whites, however, is a reinforcing shot of ‘what the hell area you doing?‘ You don’t realize how much warmth the sun gives during the day. Then you can stop for a few moments and be okay. At night, though, there is no stopping. You are cold immediately if you do. There is a blurry photo of me at 8:09PM on North Tripyramid where I made the decision to push on to the Middle peak, despite mounting internal pressure to turn around. It was so close, I knew I had it. Just go get it. I reached the Sabbaday Brook Trail junction at 8:19PM, and Middle Tripyramid ten minutes later. 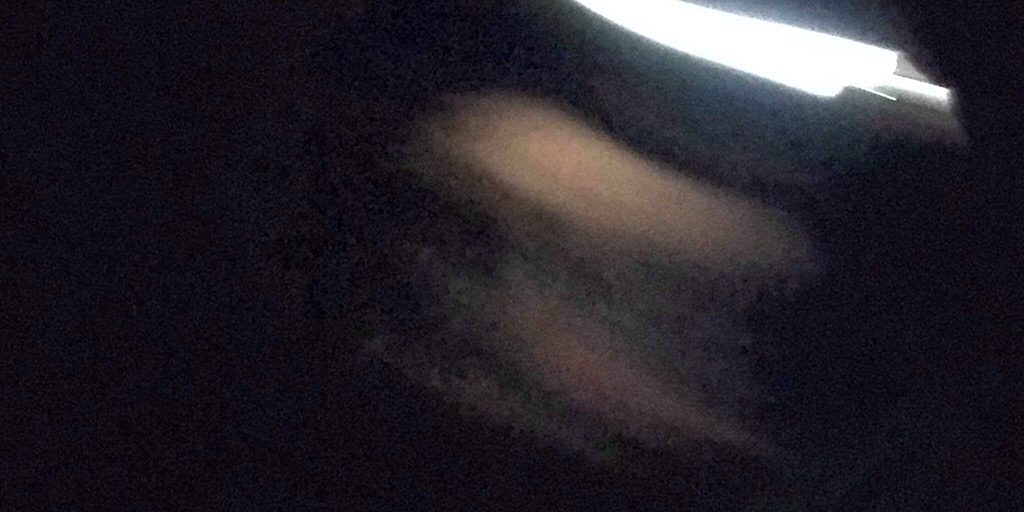 A haunting, telling image. All is not well.

Okay, It’s half over now. All I need to do is get myself out of here and down that little sketchy part by the drainage. Keep it together. Cold again and low energy, I kept pressing myself. I made it to the Sabbaday junction again and knew I needed to refuel once again. I did that, bit now I was becoming even colder. I pushed myself back up North Tripyramid and didn’t stop again until I reached the Scaur height-of-land. Dizziness was starting to sink in. My mind was telling me to sit down and rest for a few moments. From taking Wilderness First Aid (WFA) classes and knowing how hypothermia starts to rear its head, this was absolutely not an option. I took out my body warmers, attached two to my chest, put salt and sugar packets in my water (another WFA lesson) shook it, chugged it, ate some more sugar to attempt to get myself over this bonk. I slowly walked to the head of the steep part to let the glucose and salt sink in. Upon reaching it, feeling better, I was able to Tarzan swing down some of it and slide down the rest. An overwhelming sense of relief overcame me at the bottom — safety is close. 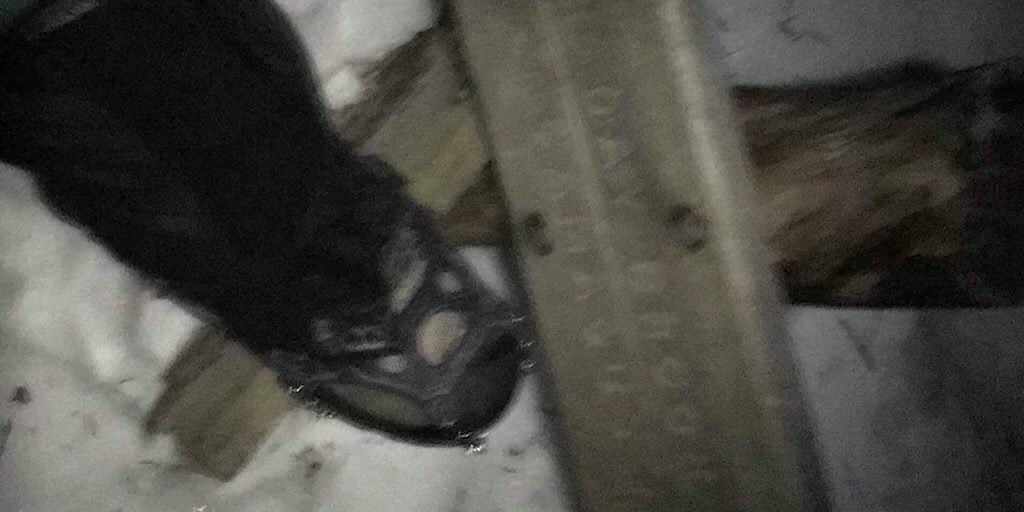 A photo of confusion?

The rest of the hike was rather uneventful, albeit knowing stopping was absolutely not an option didn’t really make it an ‘enjoyable’ walk out, either. I knew I was okay down low, trying to take my mind off the situation by admiring how gorgeous the moonlight looked in the snow. If you have never been in a sparse hardwood forest with the snow twinkling below you and the stars above you, you’re missing out. In retrospect, that was one of the most surreal experiences of the entire evening. That and finally reaching the car at 10:08PM.

At this point it was evident I was not just wet, I was soaked. It looked like I danced in front of a fire hose. Writing this from the under the warmth of a blanket on the couch with the dog softly snoring next to me is one thing, but to reflect back upon that night, several lessons stick out. 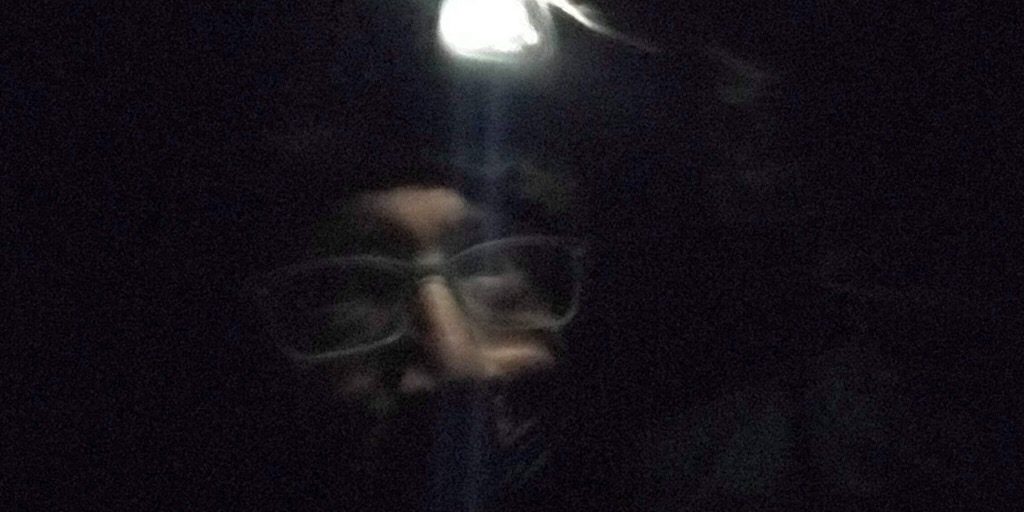 The trip back to normal.

If you don’t take care of your body, it wont take care of you. Typically I am just getting up from a nice sleep when I start my hikes — not working 8 hours and 2.5 hours driving more. I am also normally chugging at least a liter or two of water before I even get to the trailhead, and I carb bomb with a sausage egg and cheese bagel and usually Reese’s Peanut Butter cup. I did none of this that day, discounting how important they were. I was in such a great place mentally going in that I pushed myself harder than I had in a long time. Which in turned burned far more calories than I was putting it, and the rest snowballed from there. 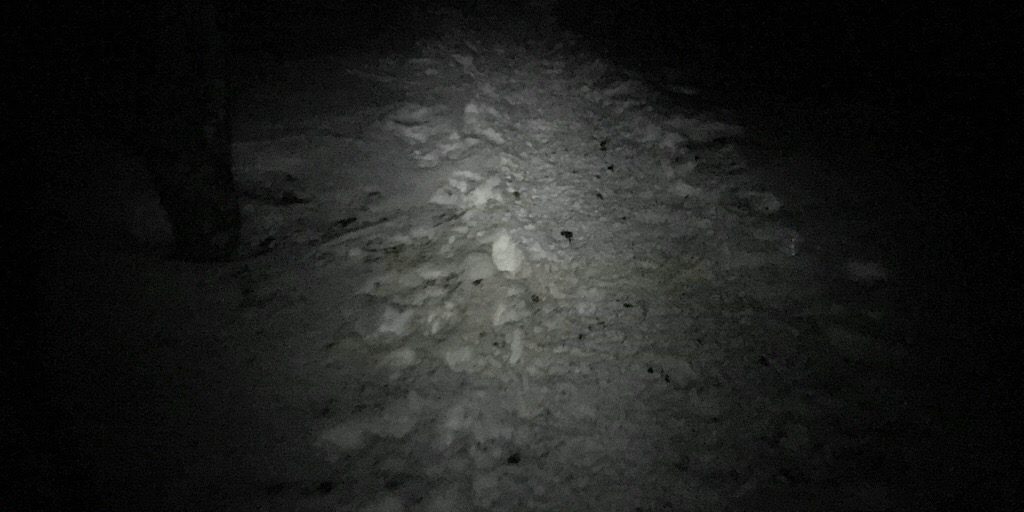 I took for granted the mountain that night because I had a series of successes. I was just reeling from a single day winter Presidential Traverse. These where summits #33 and #34 toward my quest for the SSW. It was so close! These are some of my favorite peaks! The weather is perfect! It’s fine, right?! I bullishly kept going despite knowing something was wrong. I kept trying to BandAid things, thinking it would be fine, until the realization everything was NOT FINE hits me, with four miles still to the car. 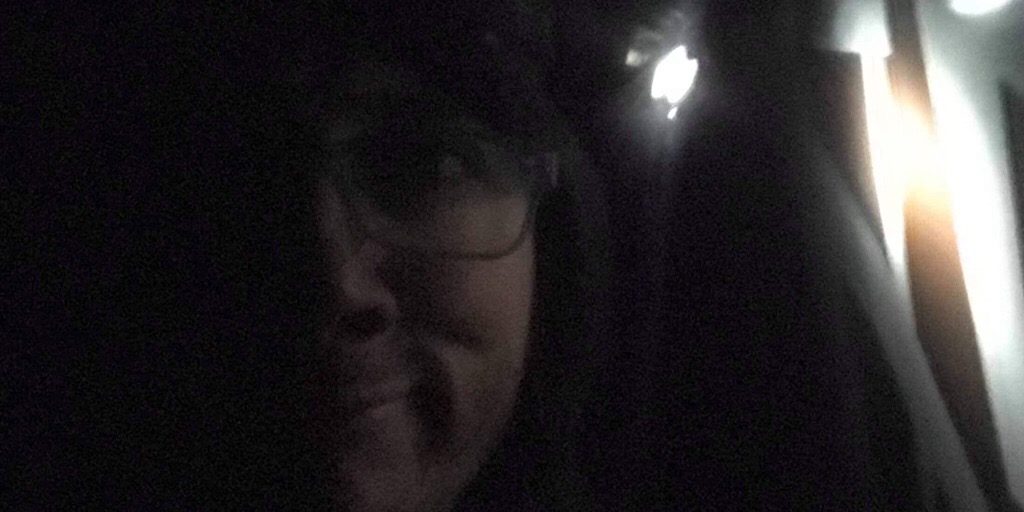 If you have not read Ty Gagne’s ‘Where You’ll Find Me‘ — go see Steve Smith at the Mountain Wanderer in Lincoln and buy it. Read it and if you have the opportunity, go see Ty’s lecture about risks in the mountains. I stupidly made several minor mistakes which could have led to something so much worse. No matter how badass, experienced, crazy, or driven you may be towards whatever goal you may have, the mountains take delight in reminding you that they are the boss. That one night on the Tripyramids I went in swinging and they knocked me on my ass. Luckily for me, the mountains spare most fools. Never again. 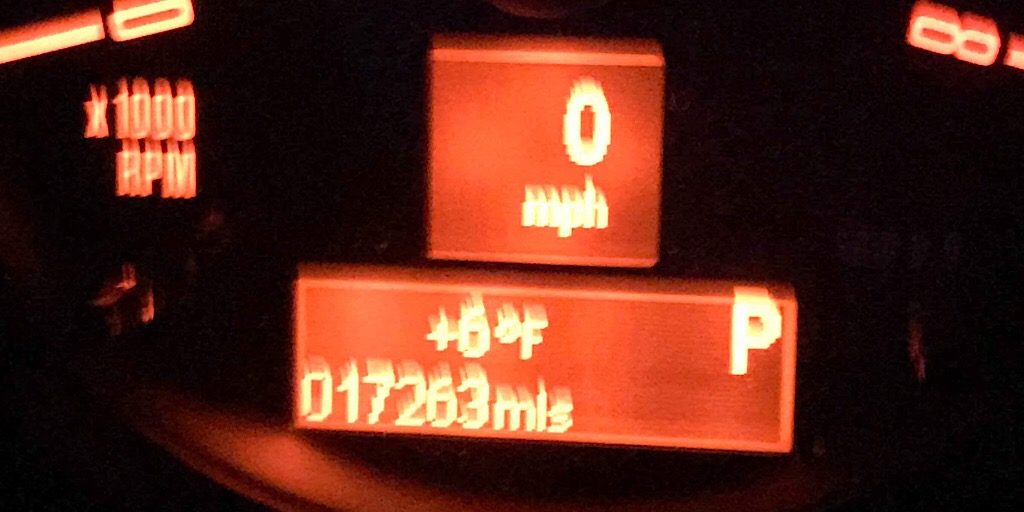 Editor’s note: Adam, by the way, did indeed finish the quixotic goal of a single season winter 48. Alive and well, and wiser than ever. Congratulations on this great feat, and thank you for sharing your story.