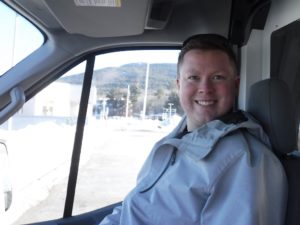 The stoke was high — no need to say “smile.”

Our Nordic and Alpine backcountry ski intro classes aren’t top sellers for us, but they are solid classes and a ton of fun. Today, thanks to lean, crusty snow conditions in the actual backcountry, we took it to Black Mountain Ski Area in Jackson, NH. There Redline Guide Mike Cherim and a single guest, Alex, purchased uphill skinning passes so they could ascend the snow covered and groomed trails there offering a much safer and more enjoyable descent. Three enjoyable descents, in fact.

The day began with some indepth discussion over breakfast at the Sunrise Shack. There Mike and Alex talked about all of the planning and preparation that goes into a backcountry ski tour checking weather (and weather trend), ground conditions, avalanche conditions, etc. This information wasn’t really needed today, but it’s par for the course. After everything was set and ready to go, the two headed to Black Mountain, got their passes, then put skins on their skis — skins are mohair-like covered strips that stick to the length of the bottom of the skis providing unidirectional traction. They began skinning up via the resort’s predetermined “uphill route.” Along the way time was spent covering technique, noting how skis are used quite differently than, say, snowshoes. The two performed uphill- and downhill-facing turns, traversing, discussed navigation, and more. Before long they reached the top of the summit lift and transitioned their gear, removing the skins, locking down the boots, and donning helmets. Then they skied. 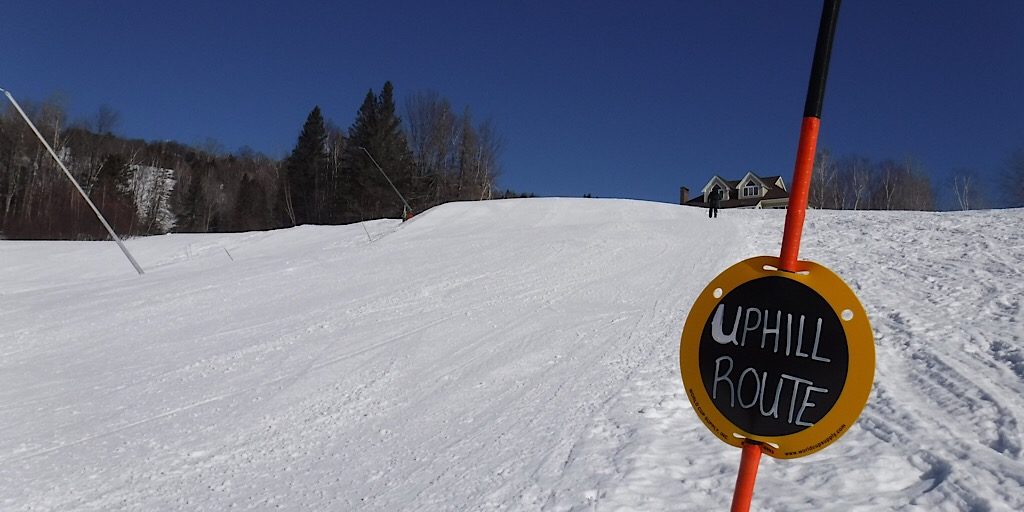 For the frugal, an uphill pass is only $10. Unlimited runs down no extra charge! 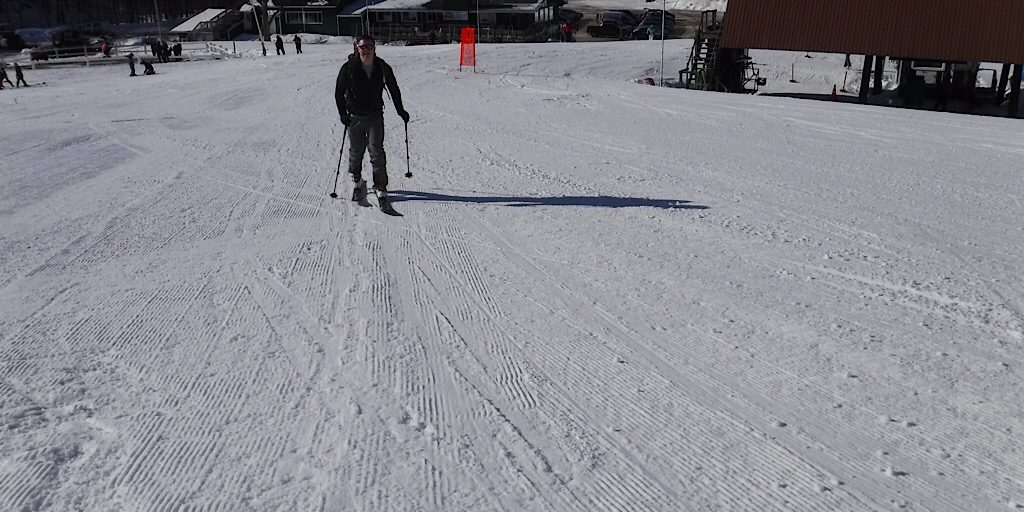 The start… our first ascent of the day. 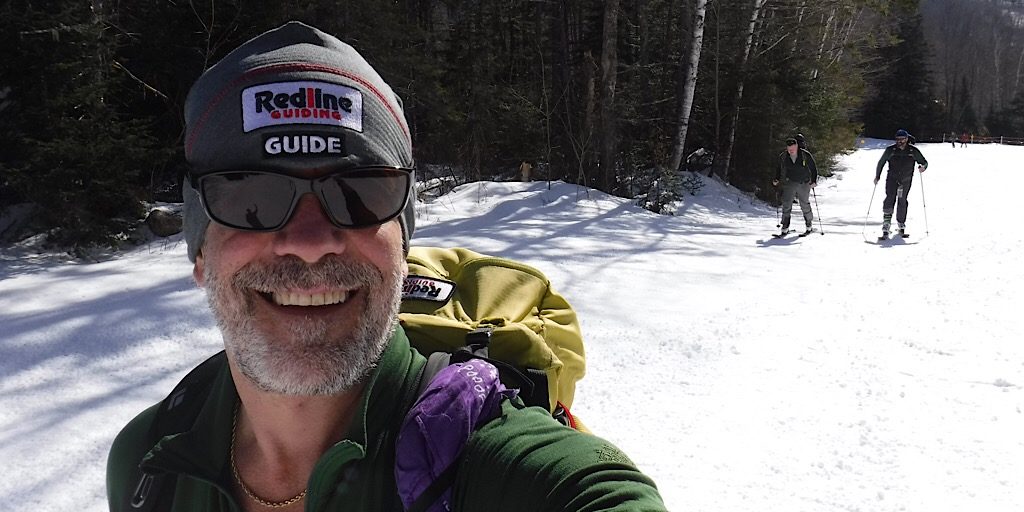 Mike the fun-loving task master having a great day. 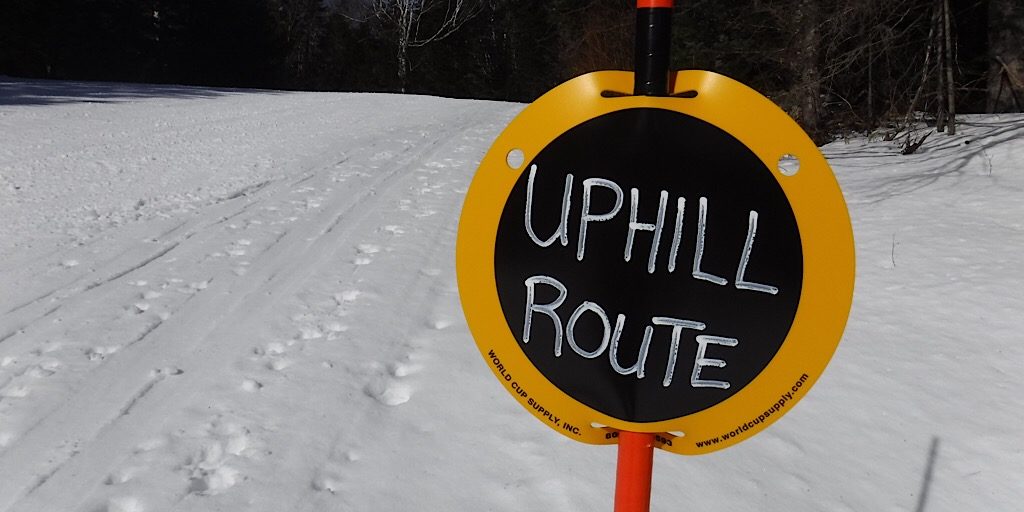 Claim verified. There was little to no downhill on this route facing this direction. 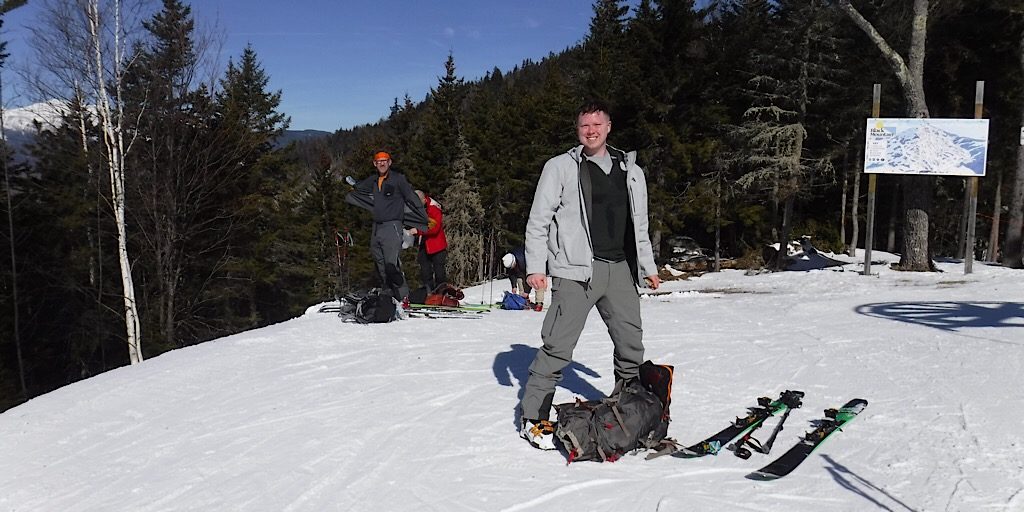 Round one. Alex’s legs were warmed up by this time. 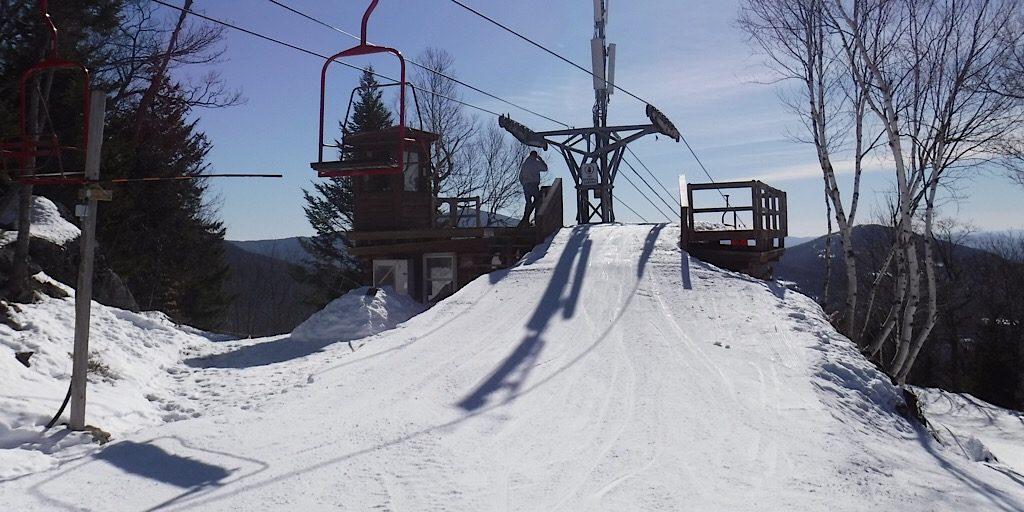 Top, and away they… 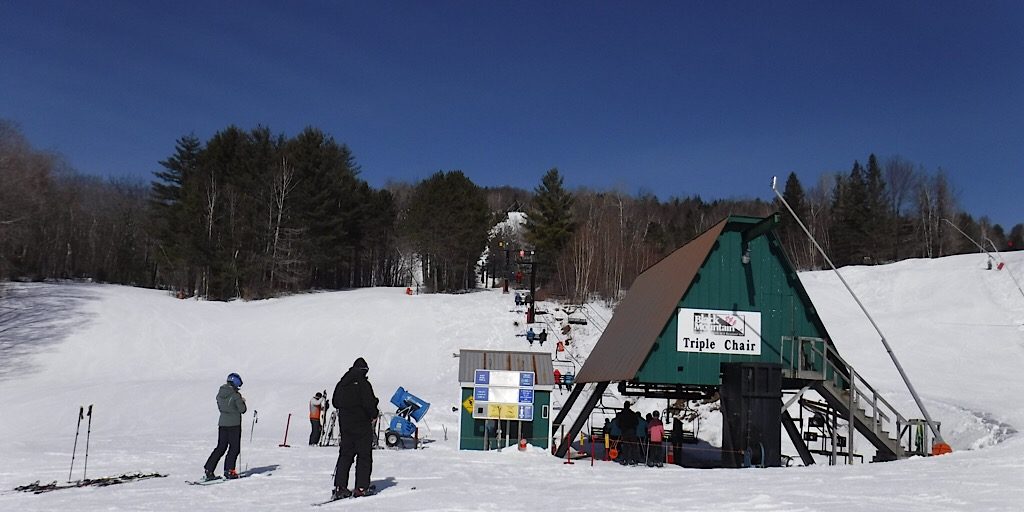 Moments later the duo reached the bottom, transitioned once more, then headed right back up to do it all over again. With the relaxed start, they were able to get two complete runs in before heading inside for a very reasonably-priced cheeseburger and fries. Of course that’s a lot of calories so after eating the two went back on the mountain and skinned to the top all over again. A fourth wasn’t in the timeline, though, but time was spent at the end of the day covering the basics of using avalanche gear. 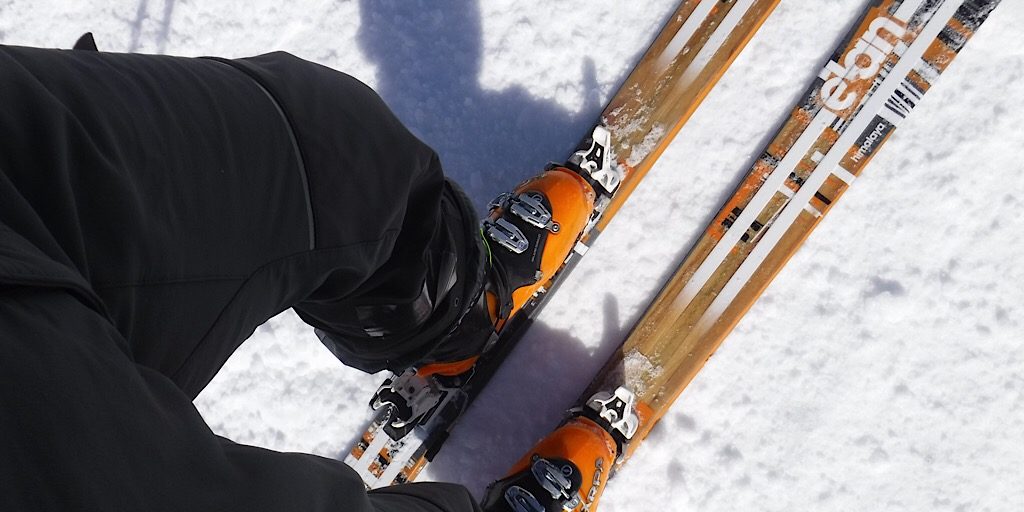 After lunch is was time to put these things to work again. 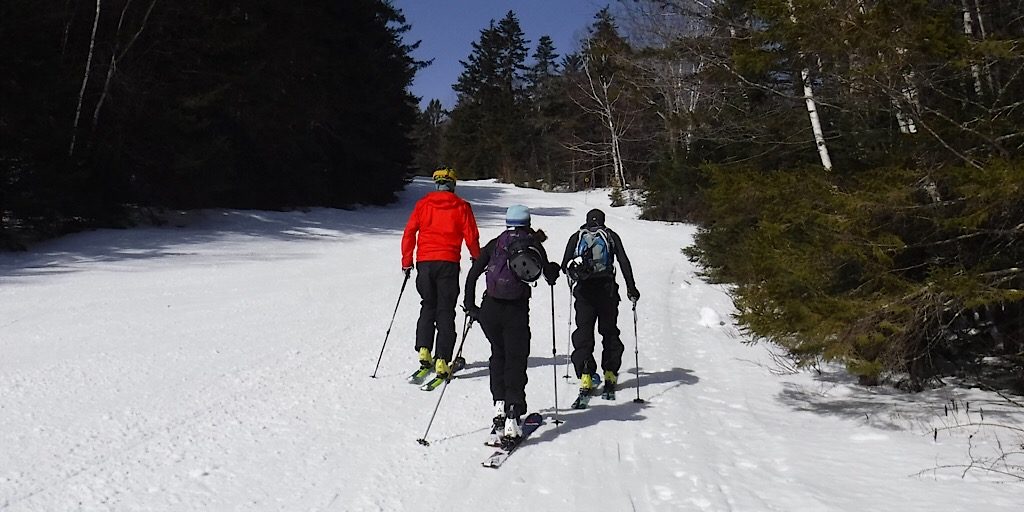 Along the way they meet and visit with local legend Andrew Drummond (in red). 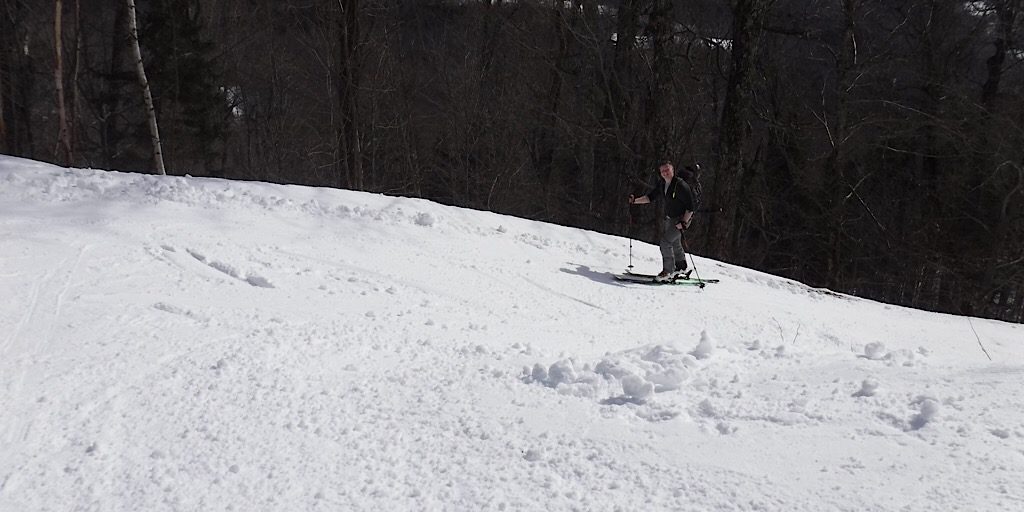 Rounding the bend, one more stretch to the top. 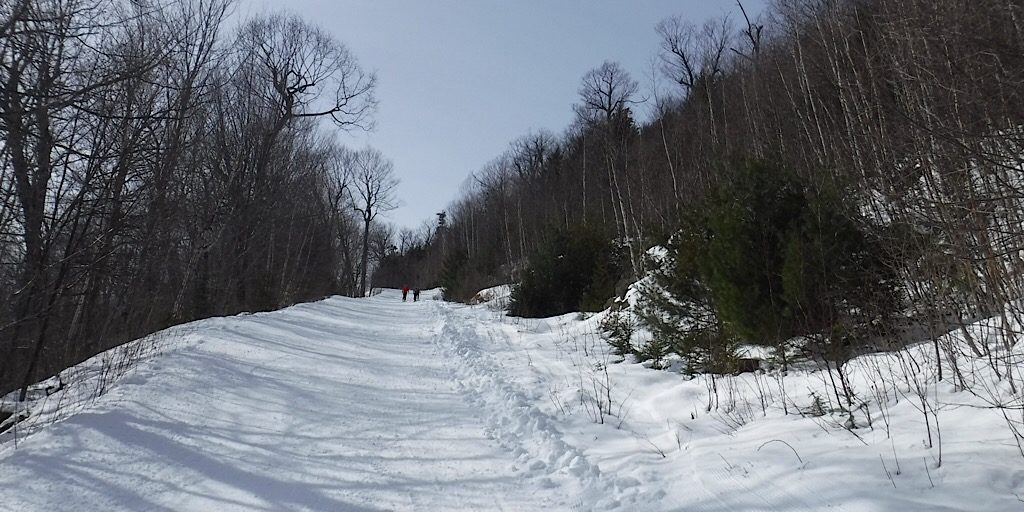 Final pitch as seen from the bottom. 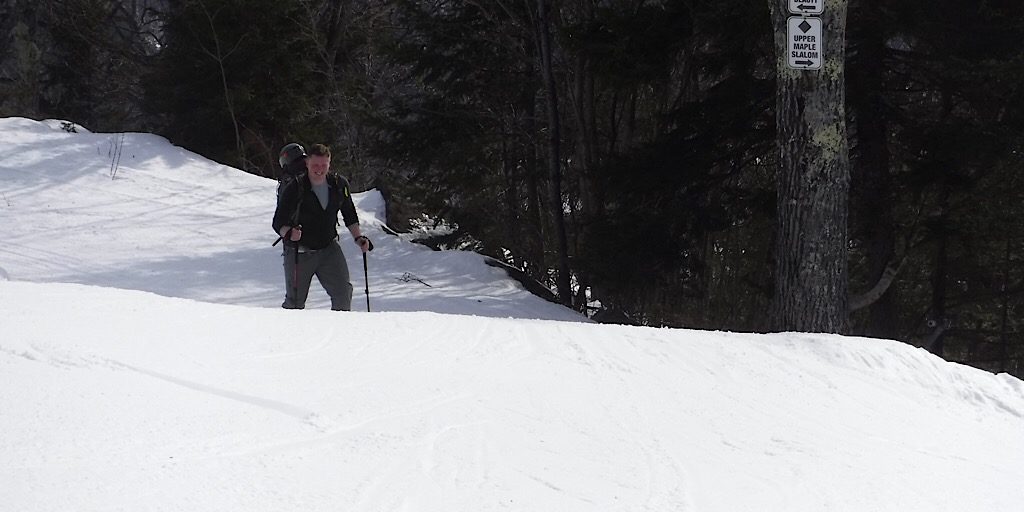 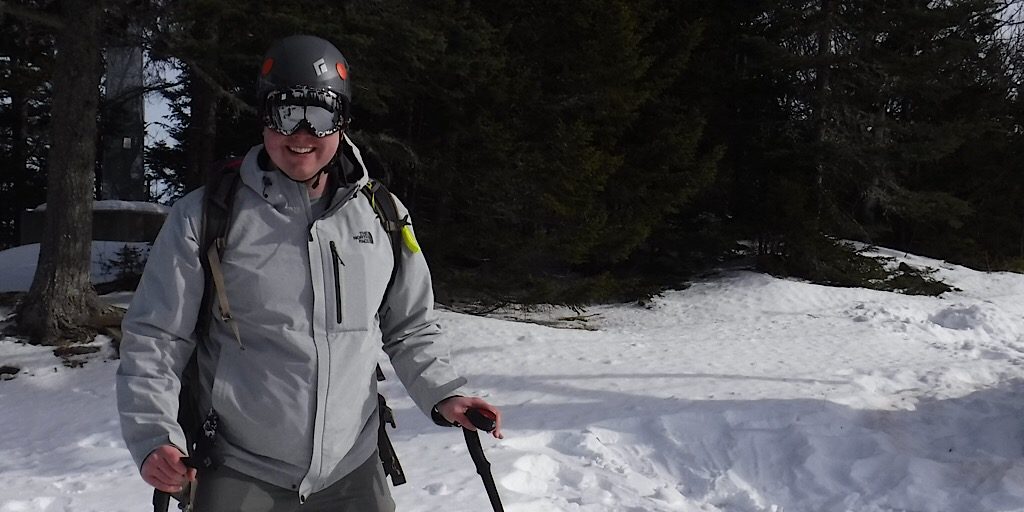 Ready for the reward: going down. That said, it’s all a sweet reward.

The skies were blue, the sun was out, the temperatures comfortable, and Black Mountain is a great place to do this sort of thing. There were several others out there, in fact, doing the same thing. Some learning, some just having fun or getting in a workout. At one point the summit had more skinners hanging around than skiers. We’re a proud bunch… and growing. Or to paraphrase Billy Joel: the skinners have much more fun.