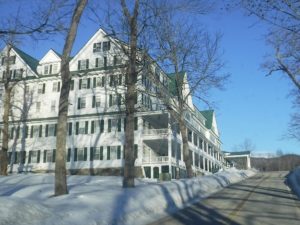 Day one began at the Eagle Mountain House.

Day One: They Train

On some days people go up to the top of Lion Head, poke their heads up, catch the wind as it steals their breath, then hunker back down saving the summit of Mt Washington (6288′) for another day. Smart people. Sunday was just such a day. And that’s where Redline Guide Ken Hodges happened to be. He wasn’t the only guide out and about, Álvaro was leading a hike in Vermont, where they didn’t summit due to high winds, but Ken was the only one on the Rock Pile where, as reputed, the weather would be even worse.

This was a two-day program that began on day one with Winter Skills and Mountaineering Skills training. This is a terrific opportunity to prepare for the demands of the next day. While the training day was a mixed group of individuals, on hike day Ken led a team of four — David (the driver), Kiran (the photographer), and Vinay and Sachin (the friends) — that came to us by way of a ride-sharing platform from Boston we mentioned before: Ridj-it. 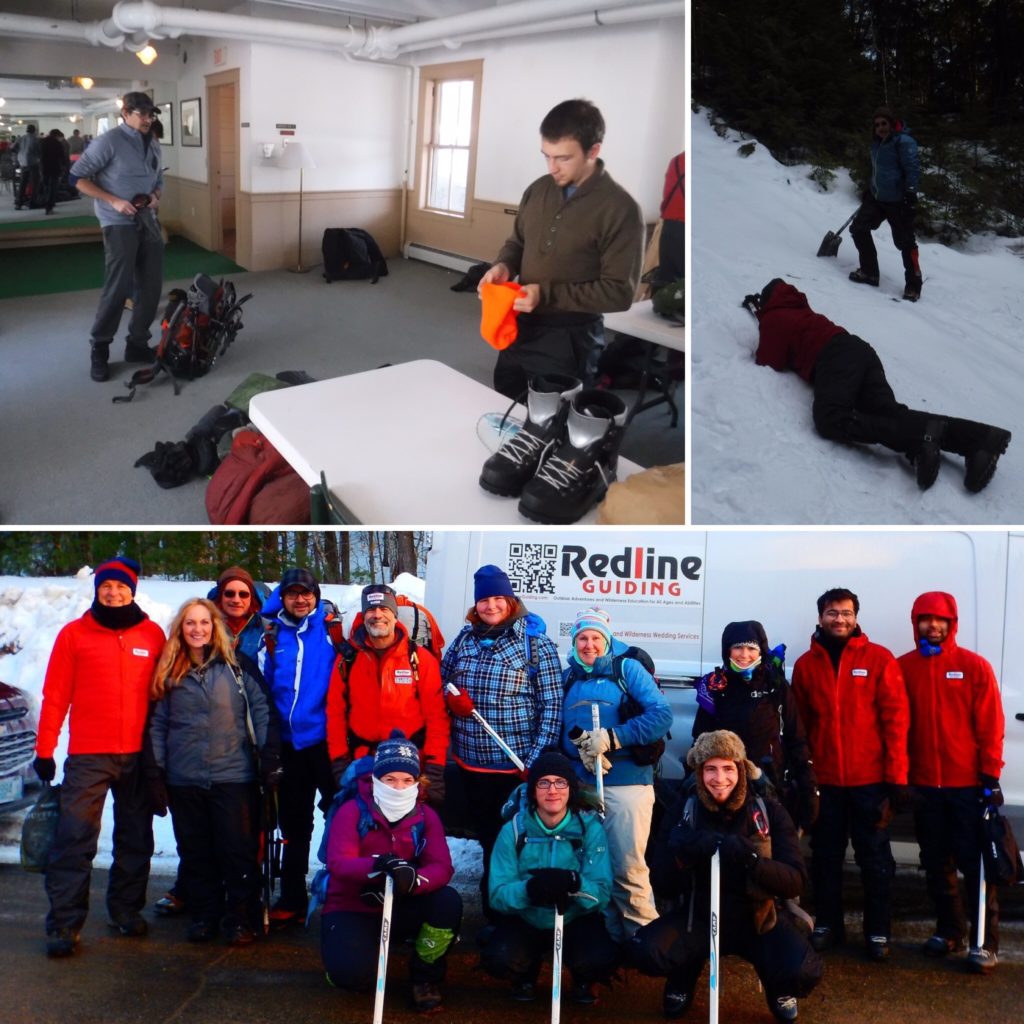 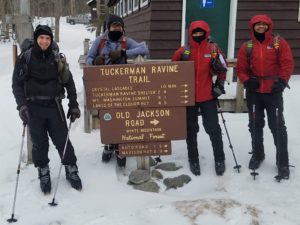 All smiles at the start. This trend continues.

Day two was the actual hike day so the team met at the Pinkham Notch Visitor Center’s pack room. After final preparations they were soon on the Tuckerman Ravine Trail hiking up toward the Fire Road junction where they would turn right. About 100 yards down this “road” they encountered the first aid cache where the Lion Head winter route connects (the summer route gets closed due to avalanche danger). There they took a break. It wasn’t their first stop to rest, but this stop involved taking out ice axes, etc., to prepare for the exciting parts ahead. Many would love that the hike started here, but alas, we must work for the good things in life.

Soon the team was scampering up the Lion Head Steeps, though perhaps “scampering” isn’t exactly the right term to use. The team did move upward, safety putting those quasi-technical sections behind them one by one. Before long they reached treeline where once again they stopped, this time to adjust layers, break out poles, and other such tasks in preparation for the next exposed segment to Lion Head — a rocky formation and minor Mt Washtington sub-summit — and the alpine areas ahead. 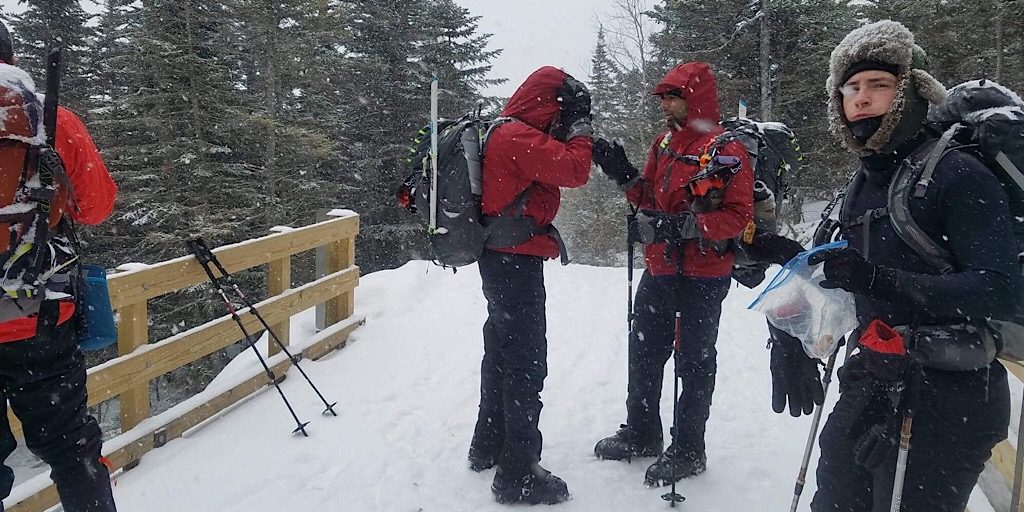 Photo stop on the new bridge. 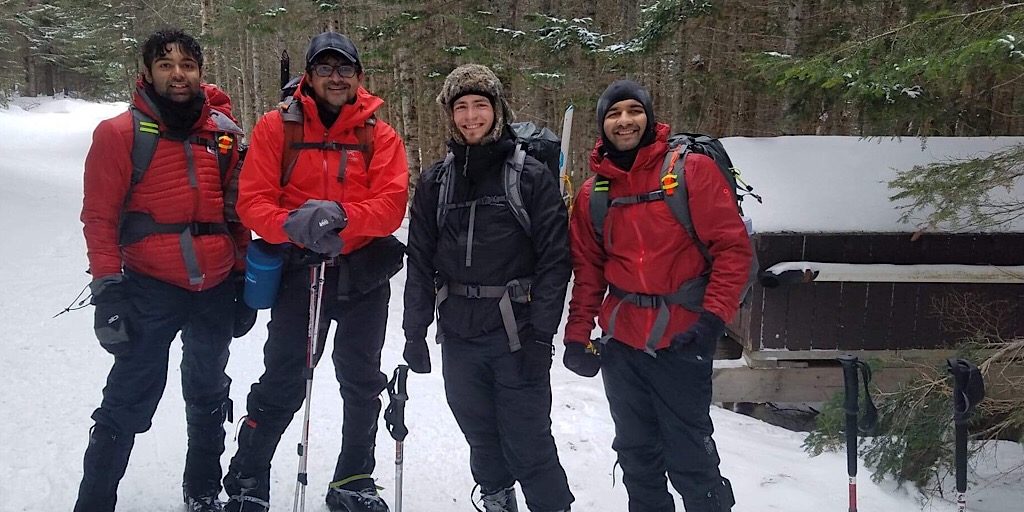 Team photo at the first aid cache on the Fire Road. 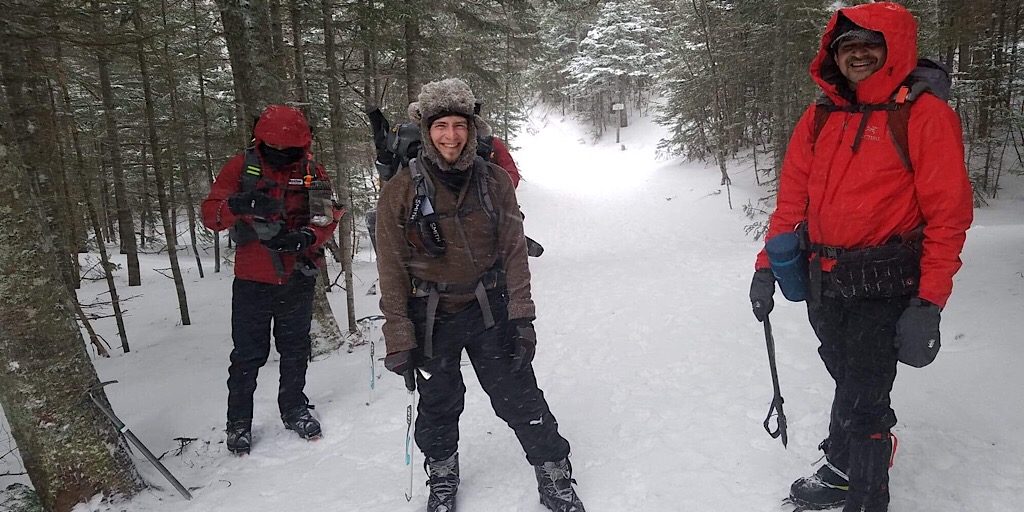 Ice axes out. It’s time for the steeps. 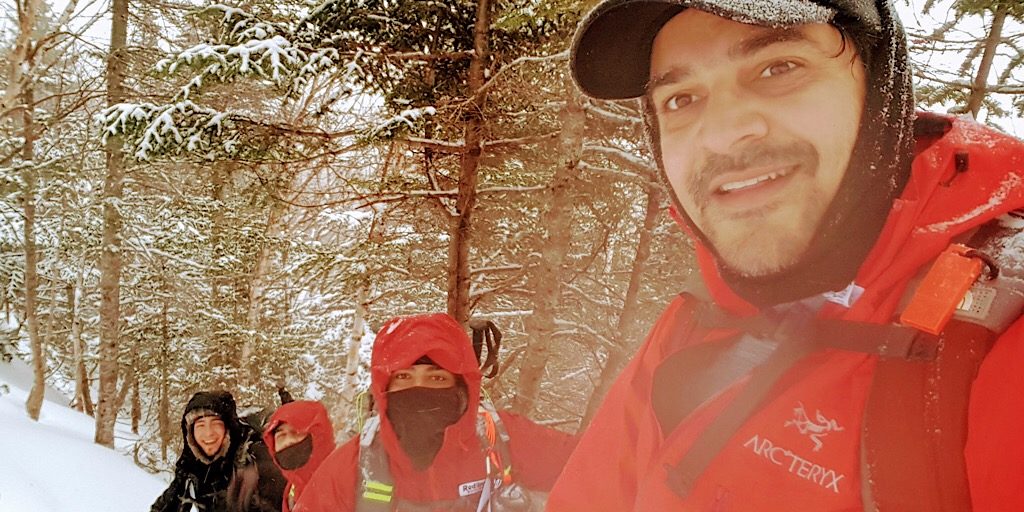 Working their way toward the “Hillary Step” (the first of the steeps). Photo by Kiran. 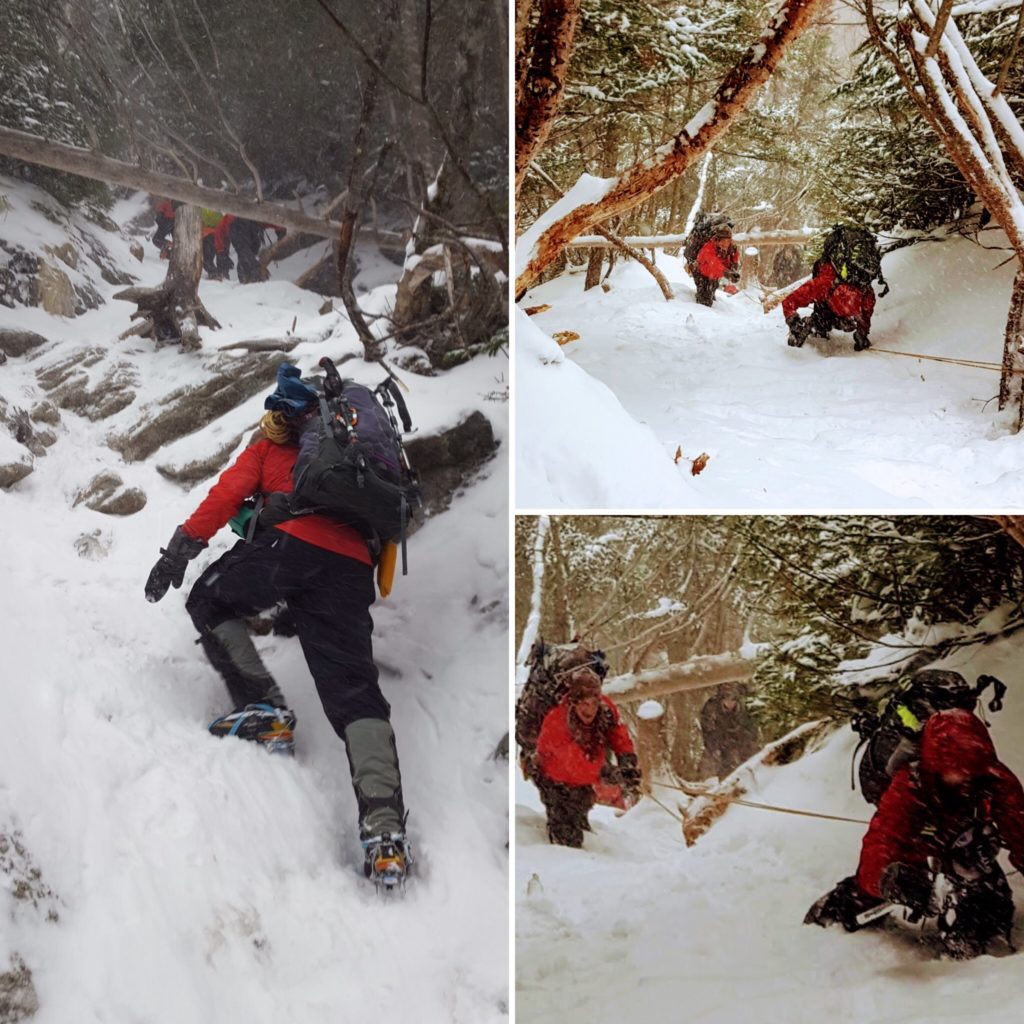 Series from the steeps. Shown left is the “Hillary Step,” so-named due to lines that sometimes form there. Photos by Kiran.

When the team reached Lion Head’s sheltered bits they took another break, this time for food and water, as is customary on this route, before climbing higher to see what it was like on top. Ken went up to measure the wind speed with his anemometer while the team rested, got slammed by a 45 mph gust (61 was recorded in the summit near this time), then came back down for the others. Nobody was going further this day, but he did want to get them up to that point, anyway, just to experience the wicked winds scouring the rocks and ice. To feel what it is like to be twisted by a gust. It’s all part of the show on such days. They screamed questions to Ken, like what’s the worst he’s seen. Of course Mt Washington was his answer. 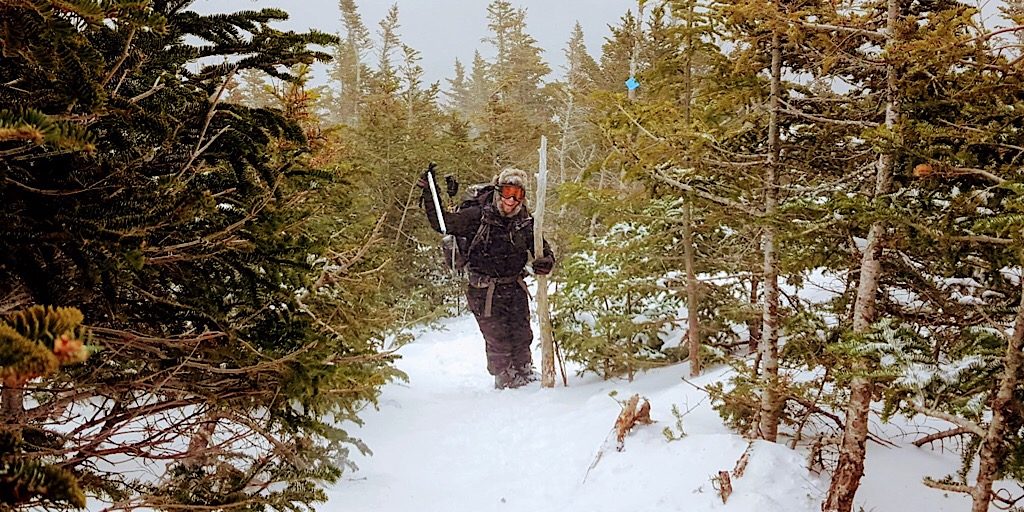 Above the Steeps. Photo by Kiran. 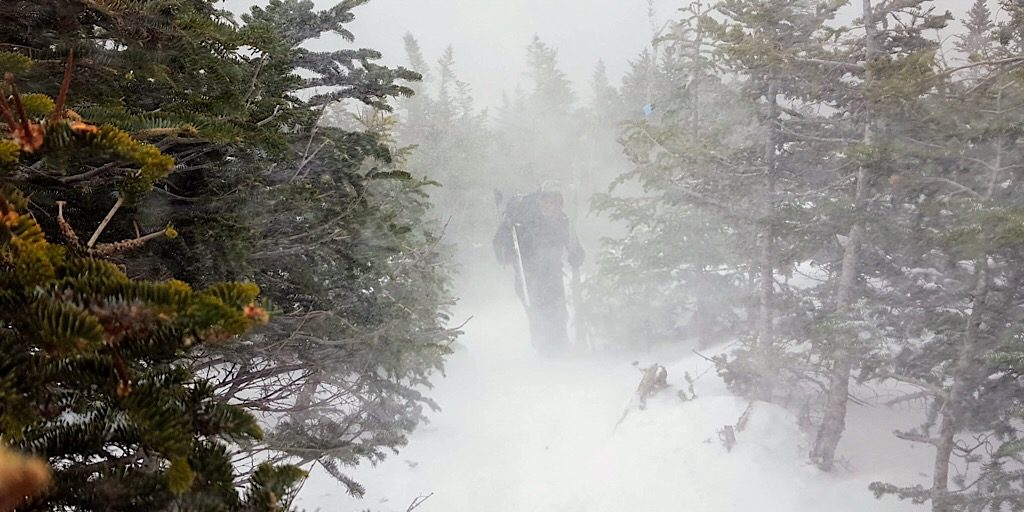 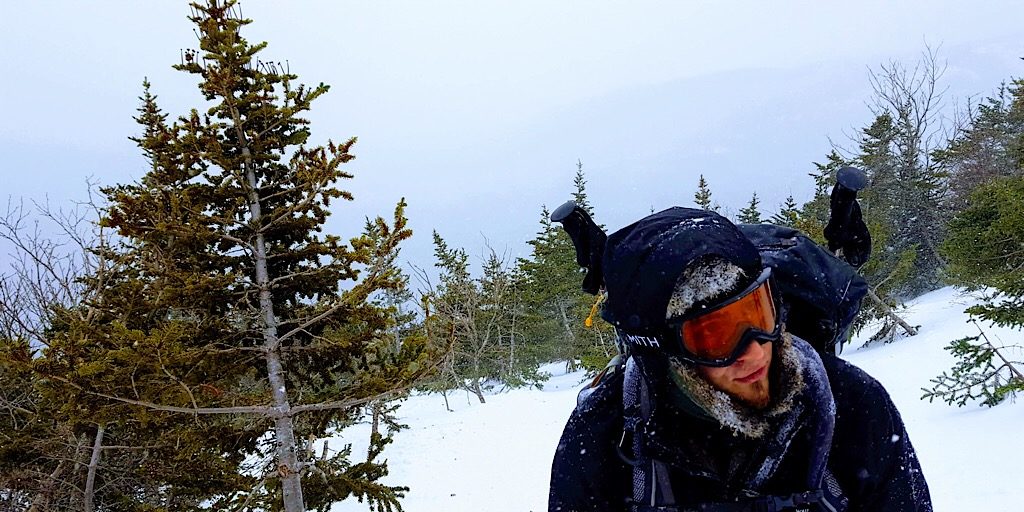 The look of awe is common at treeline. Never has David been higher. Photo by Kiran. 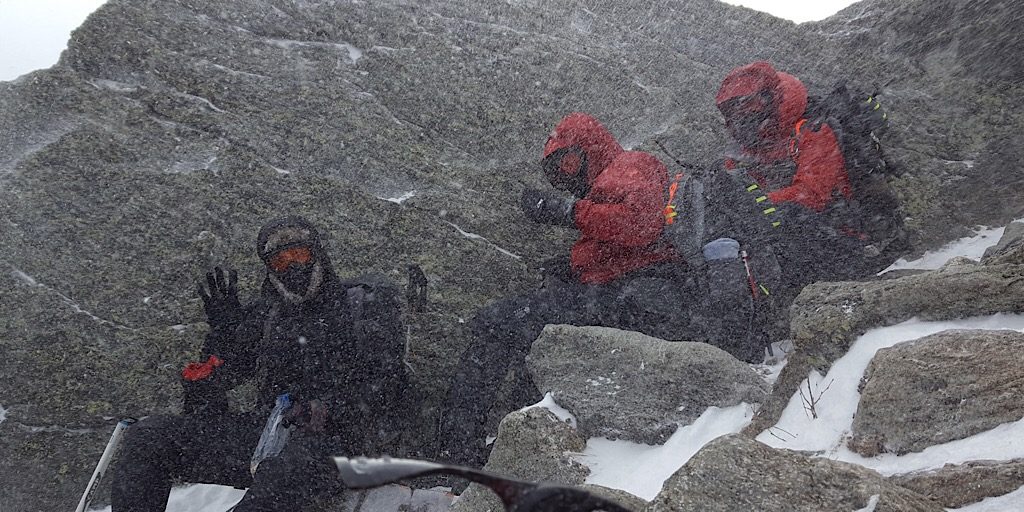 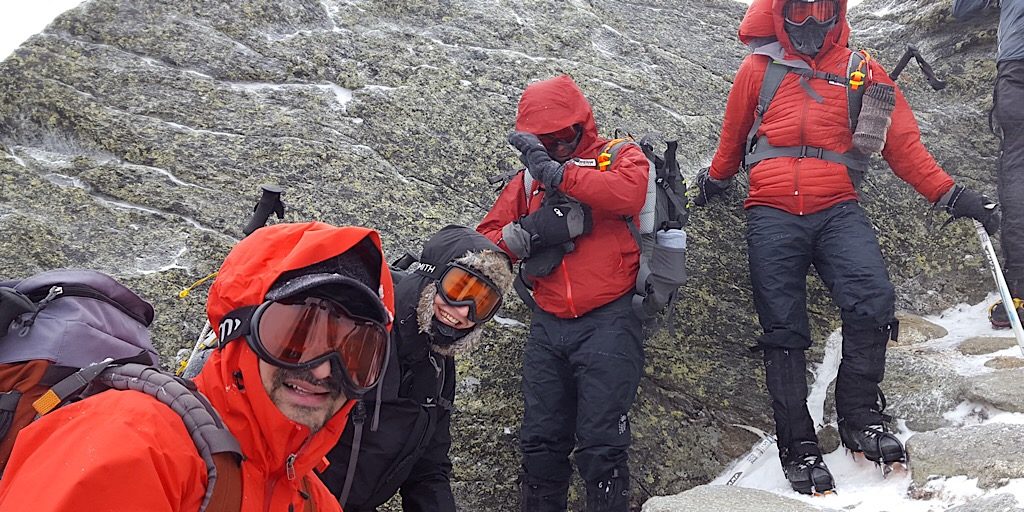 The team is loving this. Photo by Kiran. 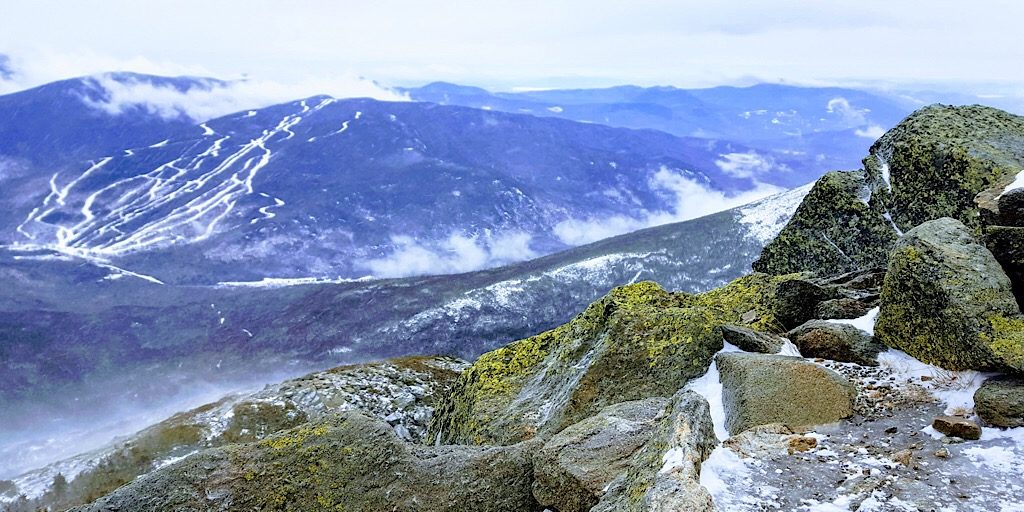 The view. Oh my. Wildcat Mountain shown on the other side of the Notch. Photo by Kiran.

They didn’t summit, but it was an incredible experience nonetheless as these photos try to show. The team descended from this point, using their training, Ken installed a rope handrail for their descent down the Steeps taking away most of the danger and nearly all the fear. It was a sound choice.