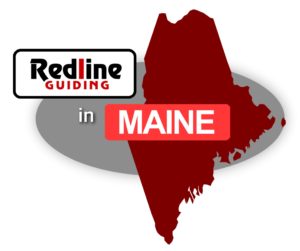 If you’ve been paying attention to what we’ve been up to since spring you may remember Bob. He’s the fellow in Maine whose wife cares enough about him that she insisted he hire a guide while he completes the trailless peaks on the New England Hundred Highest list. Caring woman, smart man. We paired him with Redline Guide Ken Hodges figuring it might be a good fit. As it turns out, we were right. The two gentlemen have been getting along famously since they started with a foiled attempt (which was followed by a successful attempt) on Mt Nancy. After that they took on and won Vose Spur, then Peak Above the Nubble, then finished the New Hampshire qualifiers by the finally bagging the infamous Scar Ridge.

With the New Hampshire summits done, it was time to start — and nearly finish — the trailless Maine peaks on the list. Due to such long drive times, the men spent a few days north and east summiting, in order, Elephant Mountain, White Cap, Kennebago Divide, “Cupsuptic” Snow, East Kenebago, and Snow (Chain of Ponds)… wow. It wasn’t easy. Elephant a tough bore for starters, then rain dampened their time. Well, let’s let Ken tell it in his words, with his photos.

For our continuing quest to help Bob bag his New England 100 Highest, we both set out for a four-day trip to climb Elephant Mountain and the “6-Pack” in the Rangeley Maine area. The 6-Pack are a group of peaks that are supposedly trailless and are all under 4000-feet. —Ken Hodges

Our first peak was Elephant, which we detoured to and climbed on the way north. We had some trail beta about a couple of herd paths so we drove up a long dirt road, found an entry point, and headed into the forest. A short distance in we realized that this route was going to be a nasty bushwack through thick, pencil-like spruce. We decided to head out and try another approach, which proved easier. We walked through herd paths and some trees but got to the summit and back down within three hours.

And so begins the start and hardest part of the next four days.

Bob said Elephant was second only to Scar Ridge in terms of difficulty. 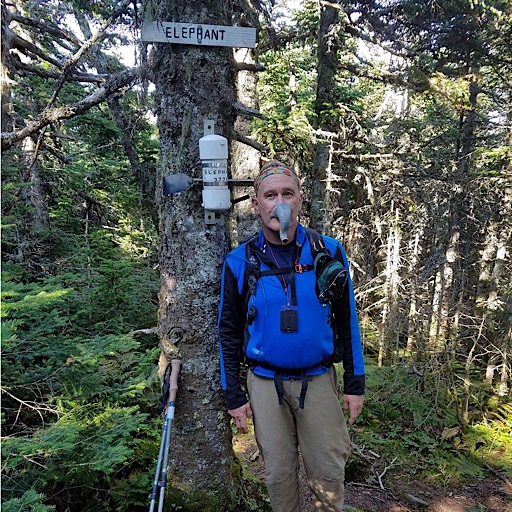 On the summit Ken opts to wear the famed elephant nose… despite its reputation for getting around. 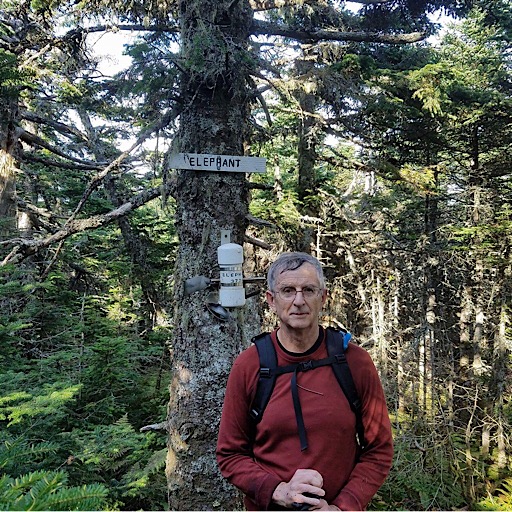 Bob does not fancy the idea of putting that thing on so he doesn’t. Will the summit still count?!

Day two arrived promising cloudy skies and temperatures in the mid 50s (not). Our objective was White Cap and (North) Kennebago Divide, both of which I hiked several years ago. The day started with an 18-mile ride on dirt roads on which we occasionally and quickly had to pull over to the side to allow for fully-loaded, fast-moving logging trucks. Along the way it started to rain lightly. We arrived at the end of the road and started up an old logging road, which was easily passible compared to when I last hiked here. Back the we trudged thru thigh deep slash till we got into the forest and found the herd path to White Cap. This time we walked on flattened slash and got to the herd path rather quickly, albeit in steady rain. Along the way we noticed a herd path marked with a very small cairn that marked an approach to Kennebago Divide. We trudged on through the rain past another herd path that I used to access Kennebago Divide that I remembered being thick forest sometimes. We summited White Cap on a well defined path but didn’t spend much time there because of the rain. We headed down hill, cutting in at the first herd path we saw on the way up. This path quickly headed uphill and joined the other path which is well defined these days. At the summit we put on extra layers as the temp was 38-degrees Fahrenheit and we were fairly soaked. The rain stopped as we got back to the car but it was an excellent hiking day regardless.

As well do cairns. 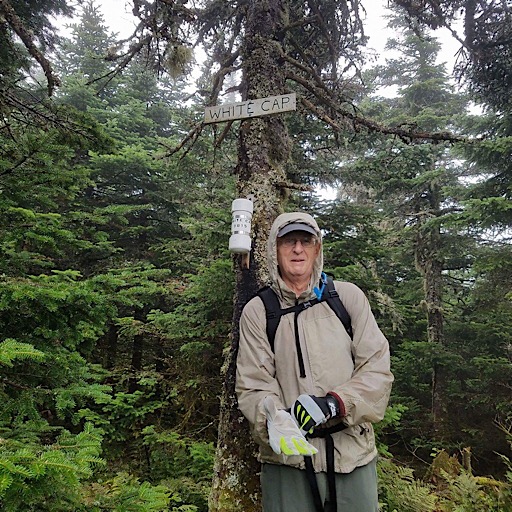 Rainy day summit one for Bob. 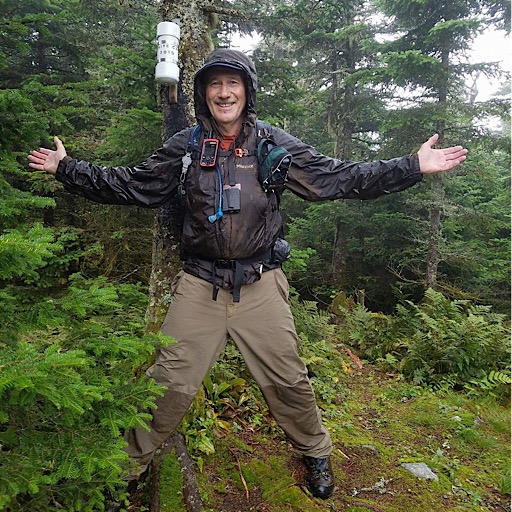 For Ken, too… who is apparently relishing the moment. 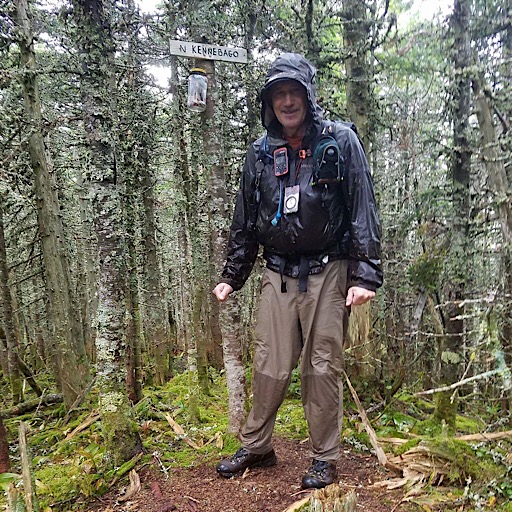 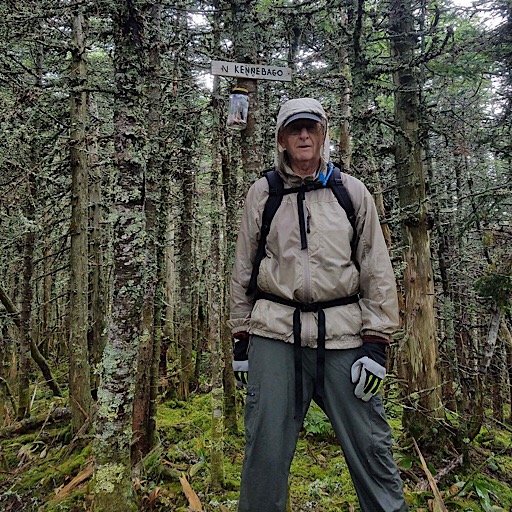 Bob is getting it done!

Day three arrives cold but under skies. We headed out on the same 18 miles of dirt and gravel road for Snow and then a drive over to East Kennebago. Snow still has a lot of old logging slash also. We had some trail beta for this one besides what I remembered. After following trail sign for a while we decided to bushwack in a ways in the hope of transecting the herd path on the north east ridge. Along the way we encountered a fair amount of the omnipresent moose poop and a lot of fresh bear scat as well as their tracks. We bagged the summit and then descended on one of several well established herd paths. Once back at the car we started our drive over to East Kennebago. We drove a short cut over a very sketchy bridge. Never a dull moment!

Well marked if you count clues.

Some impressive views from “Cupsuptic” Snow.

More. This is fine hiking. 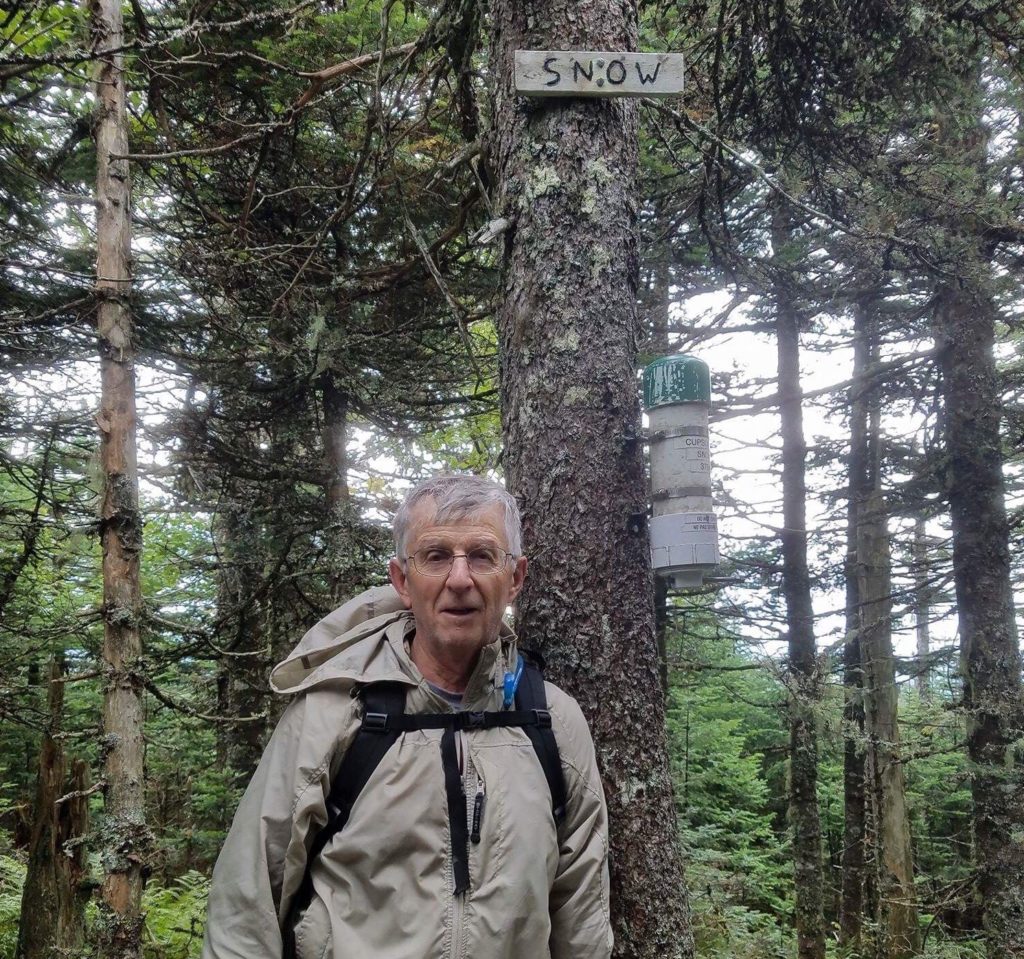 The road into East Kennebago can not be driven unless you have high clearance and all-wheel/4-wheel drive. We got to the roads end and continued on foot past great views, eventually going into the forest on a good herd path. We did this one as quickly as possible as it was late in the day and we did not want to drive out that road after dark. 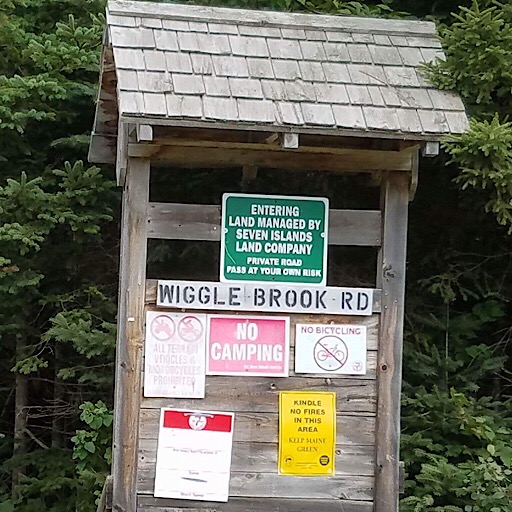 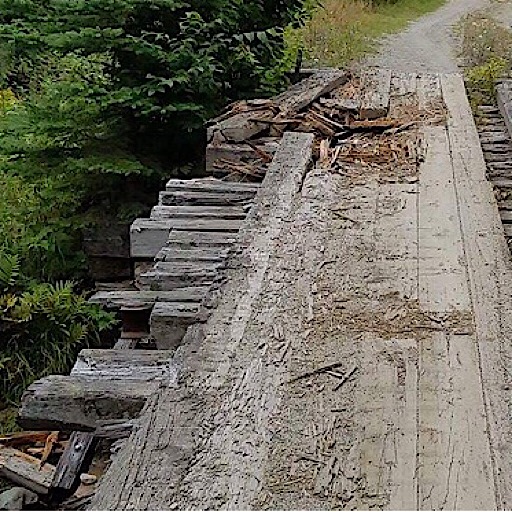 Missing chunk. Did not deter. 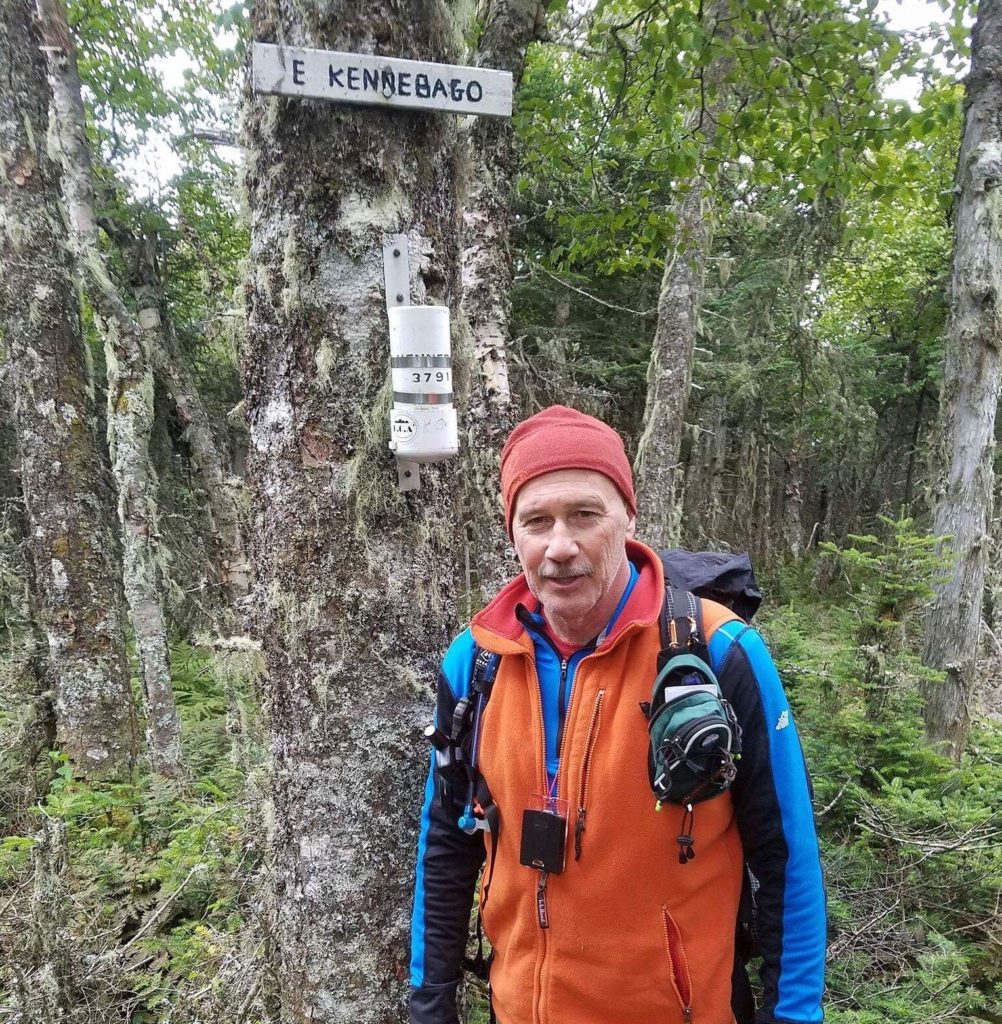 On day four we get up, break camp, and head out for Snow Mountain in Eustis, Maine. This was to be our last peak on this trip. I had attempted this one last winter but skied out with a hiker who just wasn’t feeling the love that day. We drove in less than five miles of dirt road to a parking lot and started up an ATV trail on Penobscot Tribal land. There are roads and trails on this but one needs directions or you will put in a lot of extra miles on the way to the summit, as one hapless hiker did whom we met later that day. We spent a couple of hours hiking up on roads and trails with multiple turns on a perfect hiking day, weather-wise. We ate lunch on top with a couple from Vermont who we met along the way and had a leisurely hike back. Along the way we met up with a lone hiker who spent a lot of time wandering around trying to find the correct trail network. Hopefully we gave her all the info she needed. 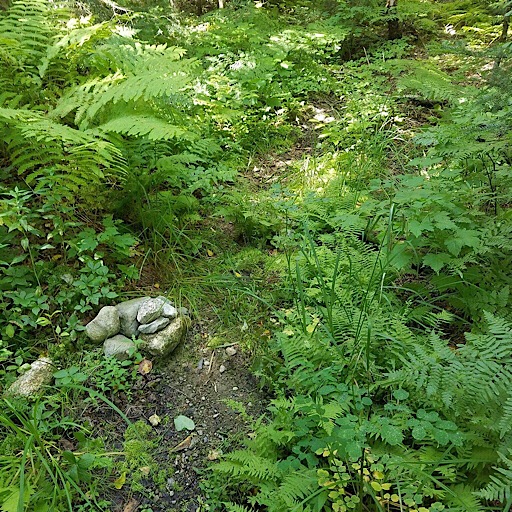 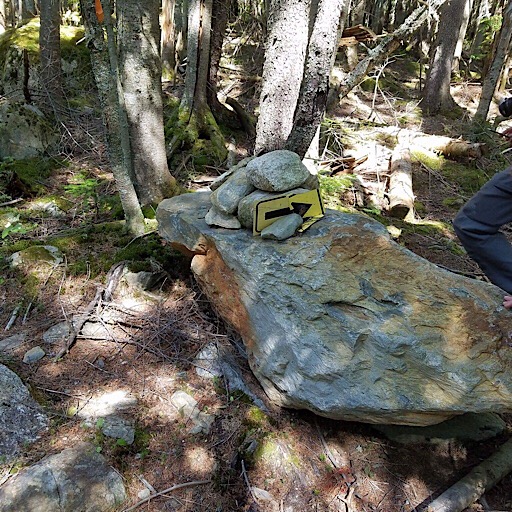 The final day was spectacular.

Tower views are hard to get (see inset). 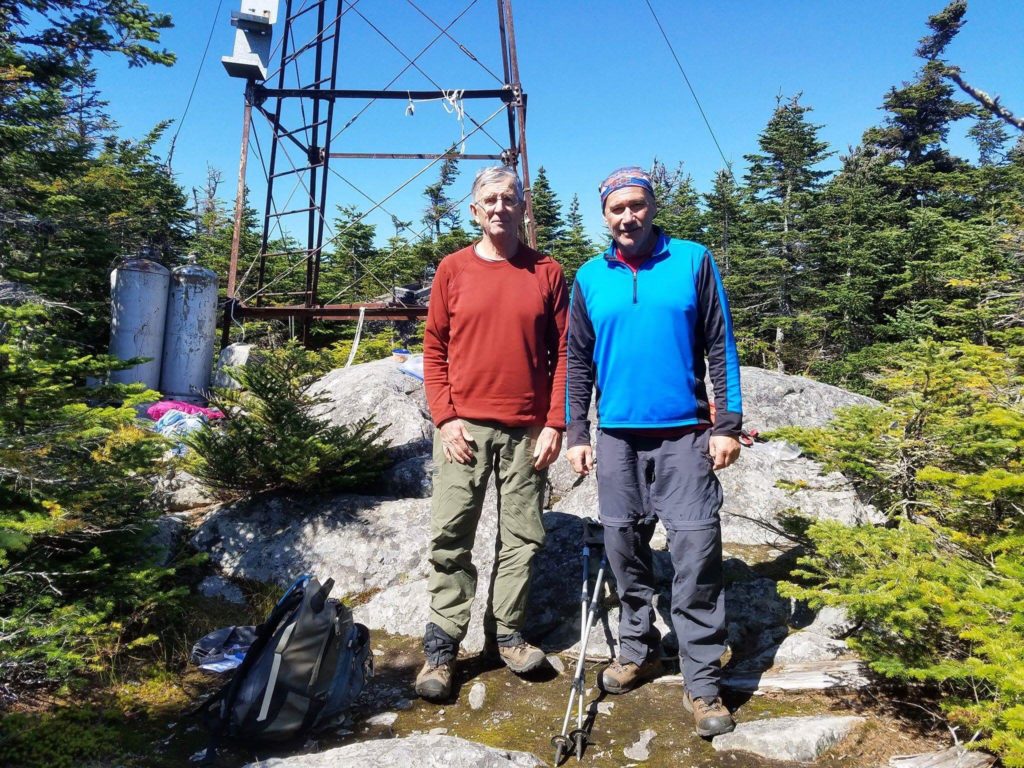 The two hikers on the final summit of their trip.