Turning Back is Not Giving Up

Scottish-American naturalist, author, environmental philosopher, botanist, zoologist, glaciologist, and early advocate for the preservation of America’s wilderness areas, John Muir (1838–1914) is touted as being the “Father of the National Parks.” You are likely already quite familiar with one of his more popular quotes: Namely, “The mountains are calling, and I must go.” This oft-repeated statement helps us relate to the allure of the mountains and their affect on our hearts, minds, our very beings, and even our souls. If you’re reading this article right now it is very likely you at least partially understand this phenomenon as you love the mountains yourself, a lot, and we will hypothesize that you either live among them or you like to visit them often. (If not, welcome to our pretty little world.)

Muir — who was also known as “John of the Mountains” — conveyed with his famed statement that the mountains pulled us to them on an emotional level. He may or may not have realized that the very mass of the mountains literally draws us to them. The pull of an object by an unseen force, the greater the mass, the greater the pull. It’s a physics thing, like gravity as but one example. So, if the force is literally a strong, physical thing, and it’s enhanced by the powerful emotional forces Muir conveyed, it suddenly becomes quite clear just how hard it is to resist that pull. We get it. But, that said, sometimes one must resist the urge as appending Muir’s statement with “…no matter the cost, even my life or the lives of my rescuers is worth it” is decidedly uncool — and unacceptable. That is the inspiration for this article.

You’re Probably Not a Quitter… Probably

First of all, let’s repeat the title of this article: Turning Back is Not Giving Up. We understand it’s a competitive world out there, rich with ego, the photos for Instagram must be taken, and the investment of one’s valuable time simply cannot be frittered away or wasted in an offhand way as David Gilmore of Pink Floyd sang. But, again, turning back is not giving up. If you hike, turning back is inevitable, some day. And it’s okay. Really. The mountains will be there another day. They, whoever “they” are, have told us this time and time again. Turning around is better than so many other options. It’s not quitting the sport, or being weak, or lacking fortitude — though to be fair, it can be. Instead it is yielding to a feeling, an acknowledgment of something beyond us, something we can’t control. It may be a mental challenge just as it may be one that’s physical. Maybe a bit of both, or maybe neither. Turning around can be something as simple as a reaction to the weather.

The value we place on our time and our egos must remain in check. The agenda cannot be paramount. Common sense, prudence, and sound judgement must rule the day when on the mountain. This is not telling you to not be competitive or show your driven nature. Seriously, it’s okay to peak bag completing lists of mountains and trails. The US Forest Service wants this, in fact. These activities — like exploring the myriad trails, hiking the 4000-footers or the grabbing all the 52 With a View peaks — promote dispersed usage which is helpful in reducing people-clumping and the impact that creates. This is a good thing. For fear of being too repetitive, we will say it again: Your case of “summit fever,” even if trying for some record, an FKT (fastest known time), or anything like that, simply cannot be allowed to get in the way of your better judgement. That said, to their credit, most people who attempt FKTs and the like are usually pretty experienced — though stuff can happen to them, too.

Judgement is an Experience-Borne Skill

The problems associated with a dangerously excessive drive and dogged determination getting in the way of turning back and making the right call, is often experienced by newer hikers or even non-hikers simply visiting the area, and not the ultra athletes you may think we mean. Thanks to how close everything is here in the “White Mountains” those uninitiated with the mountains are finding themselves in the position of making what can be their own life and death decisions. A prime example is the family who decides to walk to the Crystal Cascade ten minutes from the AMC’s Pinkham Notch Visitor Center. From there, feelin’ it, they continue their stroll another two plus miles to the Hermit Lakes. We’ve seen it before. There they fill up the family water bottle and proceed into Tuckerman Ravine. They walk, in awe, onward and upward. Before you know it they end up on the summit looking for a ride down. Or they make it down themselves. Harmed, or unharmed, all are viable options.

For most, it’ll be fine. The mountains spare most fools as we once overheard. They will do all of that we’ve mentioned, they will not turn back, possibly tempting danger a lot more than they will ever realize. Not wiser or feeling as lucky as they should. Probably just tired — that was more than they thought it would be — the kids passed out in the backseat. The family heads home. After shaking off that thing we did yesterday, the photos quickly go online. Others, friends and family, in awe, follow suit. “We have to do that, too,” say the Joneses. Though we’re not picking on tourists, per se, poor decision-making infiltrates real outdoors people, too. To some, it’s just unclear that turning around and not making the summit or whatever fill-in-the-blank goal they have, looms large as a viable option and a sometimes very wise choice. A necessary choice.

When You Should Consider Turning Around

Or maybe we should be asking if we should consider going on. In any case, what follows are some times or factors where considering turning back/turning around needs to become the central option on the table.

Mountain Weather
The forecast in the Valley is not the same forecast as it is for the mountain. Using Mt Washington as an example thanks to its notorious weather, we know this to be true simply from gazing at it from the North Conway Village. In town it’s hot and sunny, barely a breeze is felt. Up there, however, it’s different. A cloud shroud tells us the summit is foggy, or it’s sunny and clear but the lingering snow tells us it’s a lot colder up there, and/or the presence of lenticular clouds over the Wildcats being indicative of high winds possibly capable of knocking a person off their feet, and thanks to wind chills, also making it colder still. 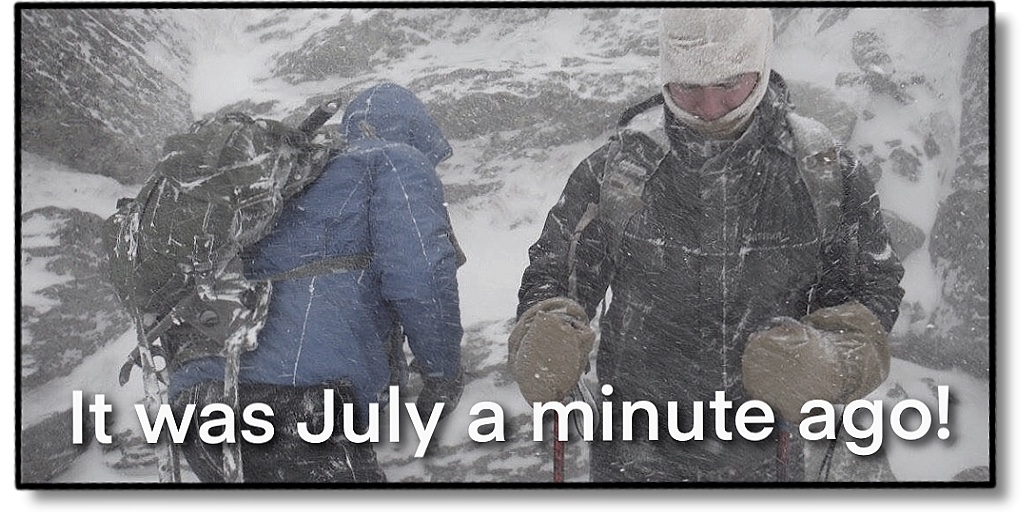 We are also told by “they” that mountain weather is not only a lot different, but that is also subject to changes both dramatically and without much in the way of warning. Sometimes there is no warning at all. That’s because the weather on the mountain can go into overdrive quickly, ramping up 0-60 in seconds just like a muscle car. To be successful one needs to study the forecast for peaks at higher elevations as well as the Valley. Then one needs to better understand not just the phenomenon of difference, but what they feel, and what they see, if they can. If you look to the west, do it, as that is where the weather usually comes from.

Navigational Challenges
As mentioned under the Mountain Weather heading, above, the summit may be in a cloud shroud at times, a thick and pervasive fog masking the landscape, making it feel cold, and significantly limiting visibility in some conditions — most notably when there is snow or rime ice up there — to a few feet. Literally. Fortunately visibility is often variable meaning if you wait a few minutes it may very well improve on its own. That said, if you’re standing at treeline, however, and visibility is diminished by clouds, especially if rime ice is forming or if it’s actually snowing, this is a cue to turn around and try again another day. If you don’t know where you’re going, don’t go.
Physical Limitations
As guides we sometimes announce to our guests that they are half way there when standing on the summit. Much to our amusement, some have looked up after hearing this. There’s no more up, but you’re not done, either, until you’re safely off the mountain. If going back the same way you came, this means the summit is exactly half way. That said, going down is less demanding on the cardio aspect of hiking so for many it is somewhat easier to descend. Also worth noting, however, is that on our joints, descending is sometimes more painful, slower, and even more dangerous, particularly if battling fatigue toward the end of a long and demanding day. Standing on the summit, a hiker is hopefully only a quarter or a third of the way through their energy reserves.
Time, Or The Lack Therof
On mountain, guiding or not, we create a “turnaround time” meaning that if we haven’t reached the summit or whatever objective we have in our crosshairs for the day, we turn around, regardless. This is one of the “Five Fundamentals.” While we do pack well and we certainly hike with all the essentials including at least one headlamp, we want to be off mountain before dark. Even if our objective is a grand one known to take many, many hours, starting in the dark and coming out in the light is still preferred. If something goes wrong, being cast into darkness is not going to help you on any level. So, if you hike something, know what you’re in for. As a general rule-of-thumb — book time — a person will need about three minutes to hike one-tenth of a mile, and about three minutes to hike 100-feet of elevation.
A Medical Necessity
Quite simply, if feeling injured, ill, or not quite yourself, you may need to turn around and save the hike for another day to simply avoid needing a backcountry medical response. There can be many possible reasons for this broad category, but in the end what’s required is a solid level of self-awareness, a keen observation of others in the party, and a willingness to admit it and call the hike as needed. Everyone wants to be a tough guy and not be the one, but hopefully this article will change your thinking in this regard if this is you.
The Unwilling Others
As a SAR volunteer two common threads are often part of the tapestry of events that make up a rescue. The first is that some people go it alone. This, as has been proven time and time again, can be fatal. One’s knowledge, experience, and honest self awareness, particularly during the colder months and shoulder months (roughly Sept-May), become critical. The second common thread is that people splitting up on a hike often leads to issues. At best these circumstances can create anxiety and uncertainty. As a simple rule, to be safe, don’t hike alone without the right knowledge and experience, and never split up your group. Go in together, stay together, leave together.

At the end of the day, if you lack experience in the mountains, you will need to be honest, aware, and ready to wait until the time is actually right to make your move. Poor decision making often affects no one but the hiker, but with a little imagination you may be able to see how a little bad judgement could also affect the lives of many people.