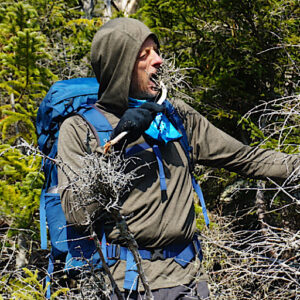 When we were first hired to lead an exploration into Jefferson Ravine we tried to take it on from the west side hiking up and over the ridge though skirting around Mt Jefferson, but that trip came up short. We tried but connecting talus top to bottom, and while almost actually possible, at the very end it ended up being a no-go. The team enjoyed the exploration, however, it was really fascinating and exciting. But being that they didn’t make it all the way to the body of water (beaver condos) — a pond located at the floor of the ravine they’d been calling “Rosanna” — they had to make a return tip. The second attempt would be via the long way in, but with a perhaps greater probability of success. On lead for this special adventure was Redline Guides Mike Cherim and Ken Hodges.

The specifics looked like this: The team met at the Great Gulf Trailhead, did the normal Covid screening procedures, had a trip briefing, Mike presented his guide credentials to USFS law enforcement (that was a first), then the team started out the hike by crossing the bridge like everyone does. It’s fairly flat at first so they made good time in following the Great Gulf Trail. After several junctions and a short break or two they finally reached the Six Husbands Trail. They followed it until the junction of the Buttress Trail. From there the plan was a little looser, knowing they’d use the brook as a terrain handrail, but not knowing exactly where they’d enter the woods. As it turned out, the team hiked up Buttress a little bit before turning to the west, Jefferson Brook still clearly within earshot.

So far the plan happened exactly as they expected it would. The crossings were all doable, and while they brought light traction in case they encountered icy rocks on the crossings, which they did, they weren’t actually needed. Better safe than sorry, right? The team entered the woods just up Buttress Trail a bit, as noted. We’d love to tell you the woods were wide open and that the teamed breezed in and out but that wouldn’t be true at all. As it turned out, and as expected, honestly, the woods were dense, ranging from tightly packed conifers to actual pencil-woods — which are literally impenetrable. And if that wasn’t challenging enough, the forest was plopped down atop a talus field. Instead of a “trail” the team had to get around or get over mossy boulder after mossy boulder. Of course between these boulders were man-sized holes ready to swallow up the inattentive hiker. Pretty sketchy; they moved cautiously.

The team wasn’t really surprised by any of it, though. Everything just mentioned was fully expected and completely normal in their eyes. It was what our guests signed up for and what the guides knew they were getting into. What was somewhat unexpected were signs of an old trail — even though Mike personally knows a retired ranger that used to patrol in the ravine and knew there used to be a way in, at least. The team was able to follow it for a bit, they’d lose it, then re-acquire it again. It was helpful allowing hundred foot sections to be taken quickly. This would help speed up the half-mile bushwhack in, although it still took a good hour.

The team members poked their skin, banged their shins, and perhaps cursed silently as they struggled. It wasn’t the toughest bushwhack Mike or Ken had been on, but it was right up there. But the struggle was worth it. The team eventually found themselves standing next to a body of water at the floor of Jefferson Ravine. The team was convinced this wasn’t the body of water they saw from above, but as it turned out — with the help of Google Earth, they did in fact find exactly what they were looking for.

To stand there in the sunshine, the boggy grasses and partially frozen mosses under their feet, the rime on the talus above, blue skies, and the grandeur of the ravine all around them. It was sublime, to say the least. It was totally worth the 11+ mile hike to stand there amid it all, wow’d by a sight very few people have been lucky enough to see. To better understand and appreciate this, the following photos might help. 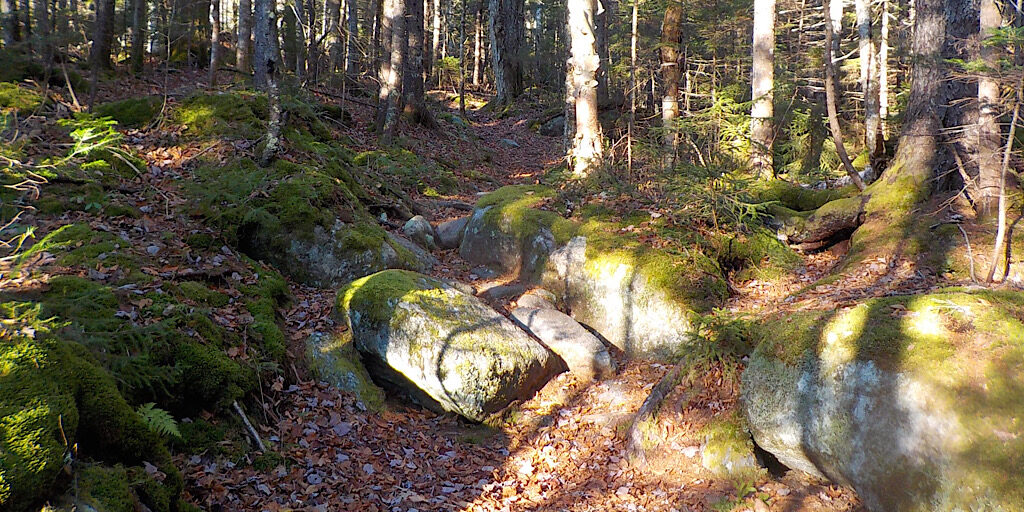 The Great Gulf Trail in of itself is an experience. 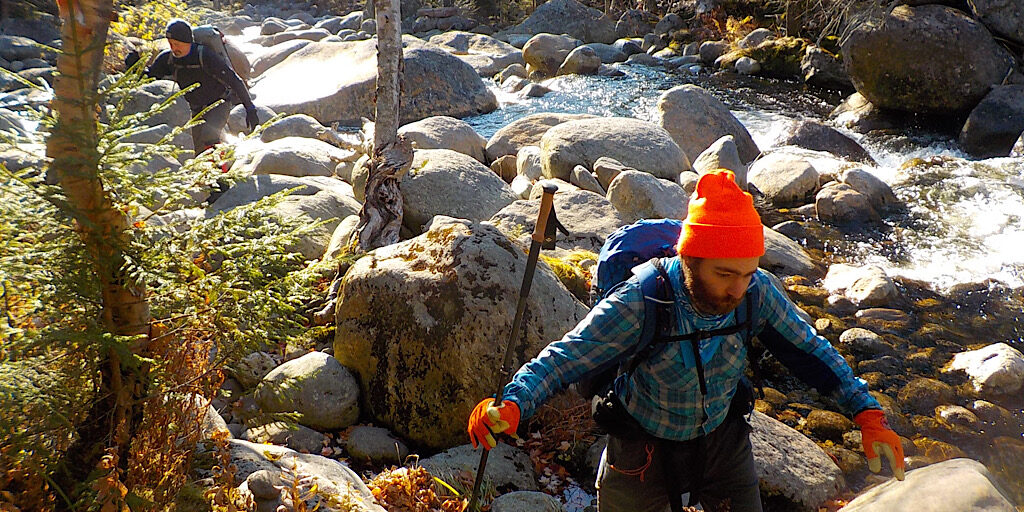 The team had just taken their first break and is starting to move again. 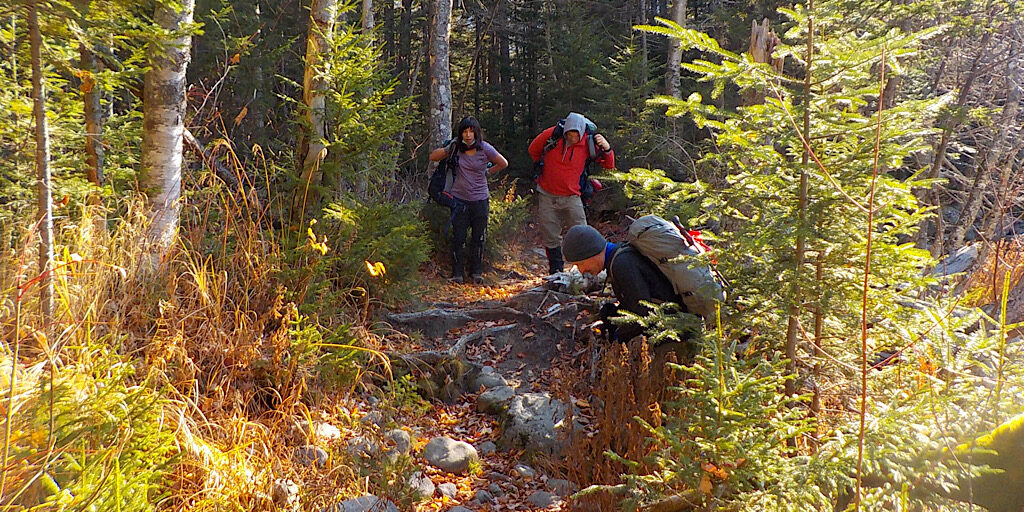 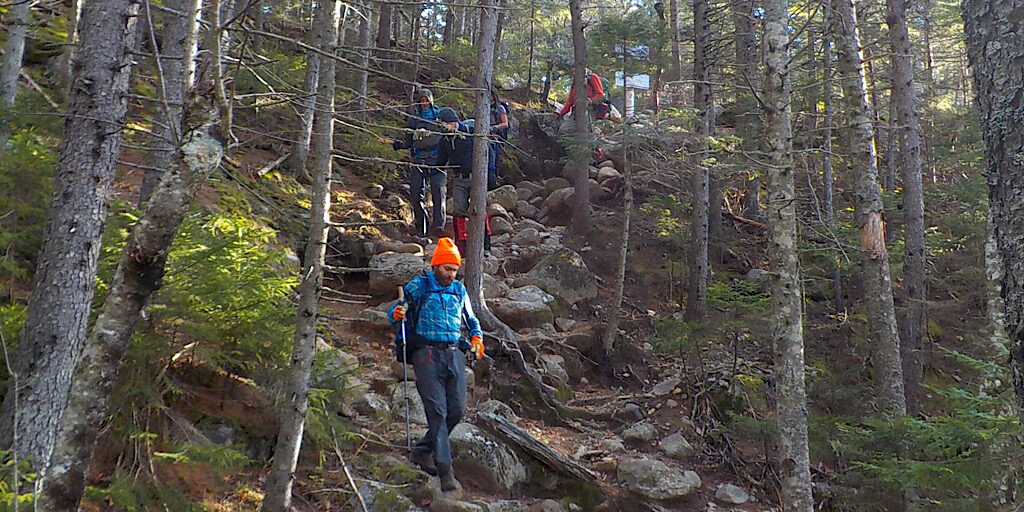 The team follows the trail as it drops down to two streams. 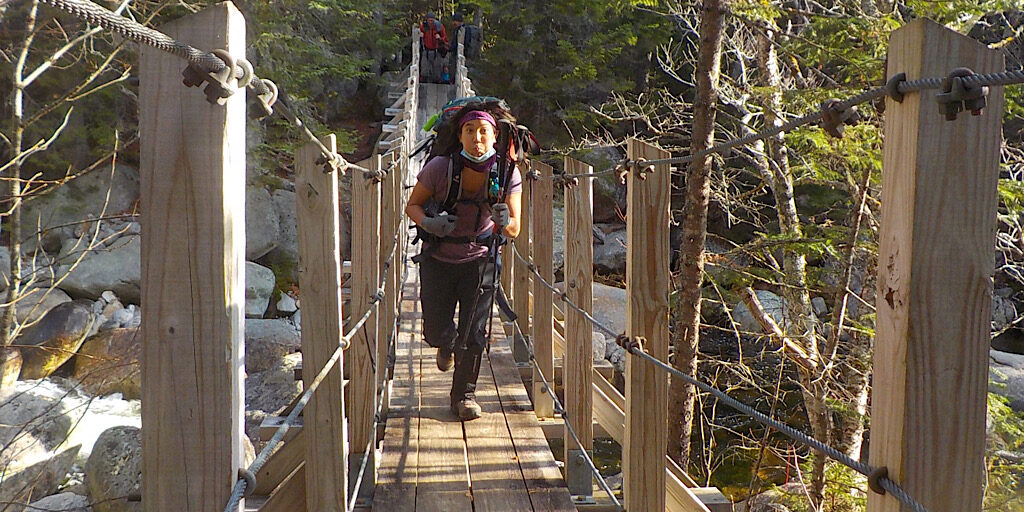 The second most enjoyable river crossing in the White Mountain National Forest. (We think the Cable Car on Yellow Trail is number one.) 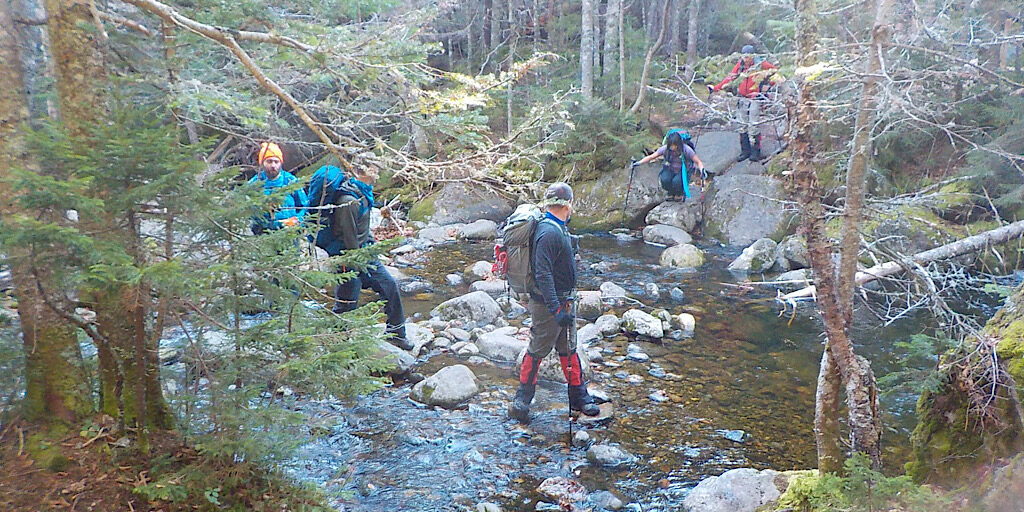 The crossings were pretty easy. There was some ice, but very little and easy to avoid. 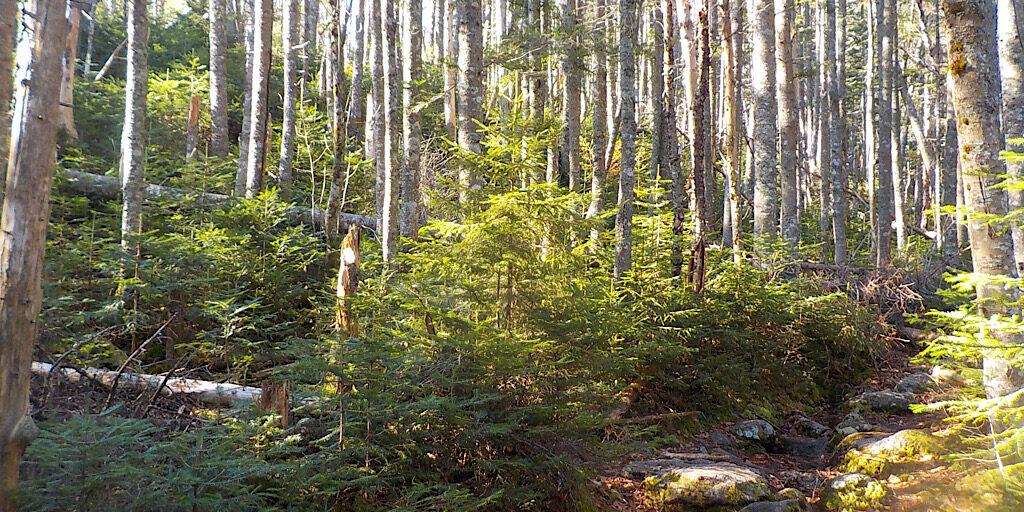 It’s so pretty in here. And such a nice day for it. 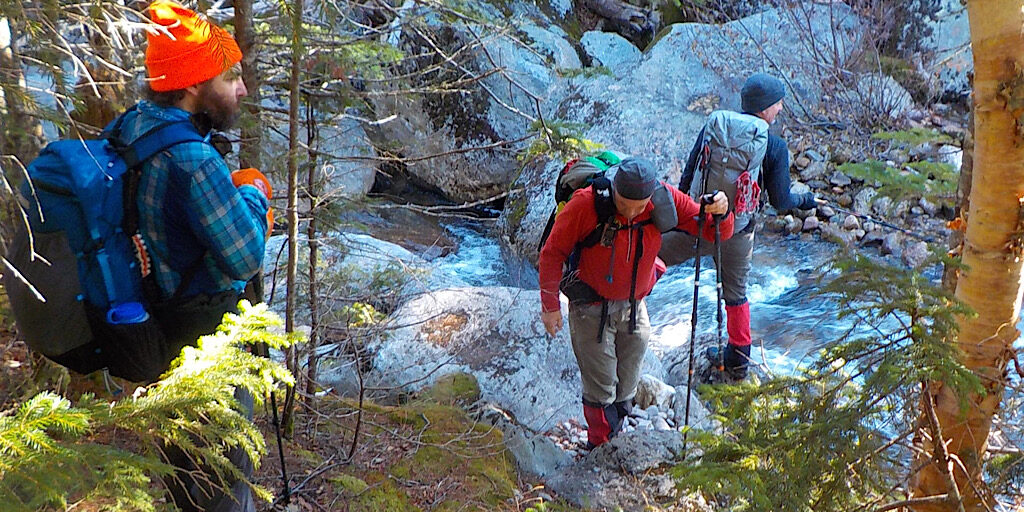 The Peabody was the toughest crossing, but totally doable. Especially for long jumpers. 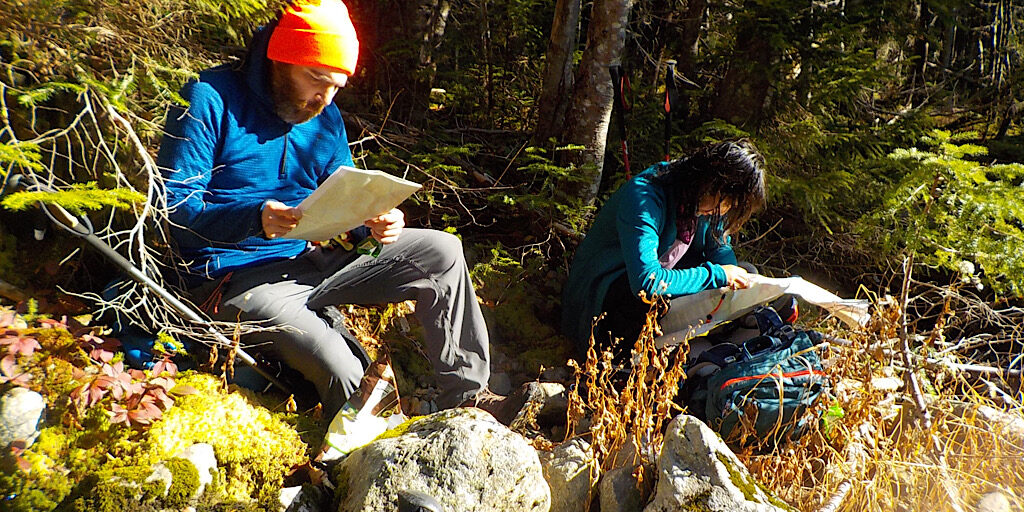 At the cross roads, the team scours their maps. 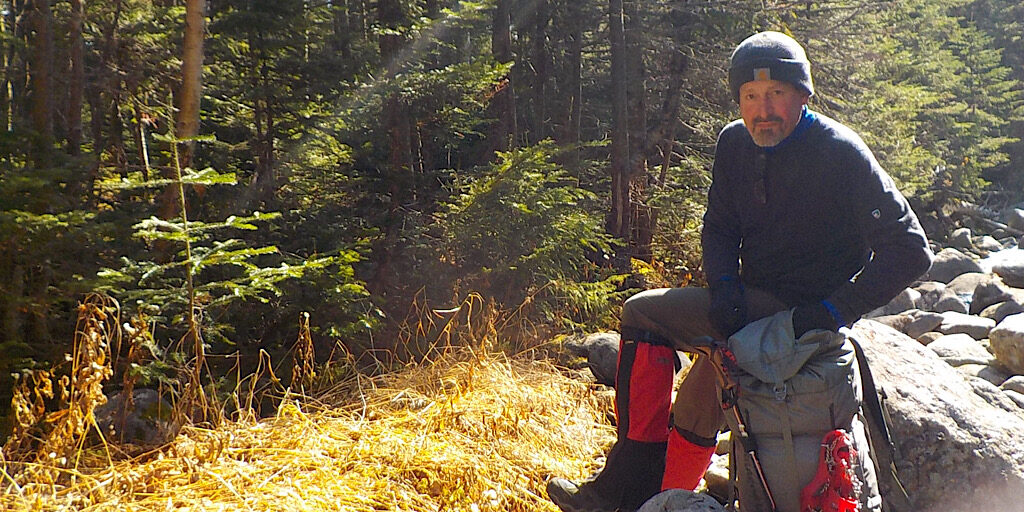 Nice in the sun. 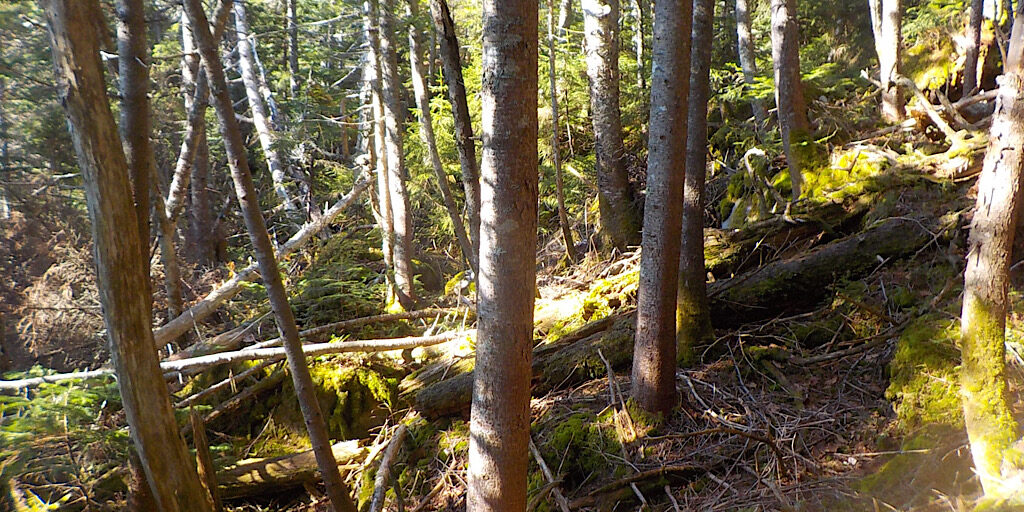 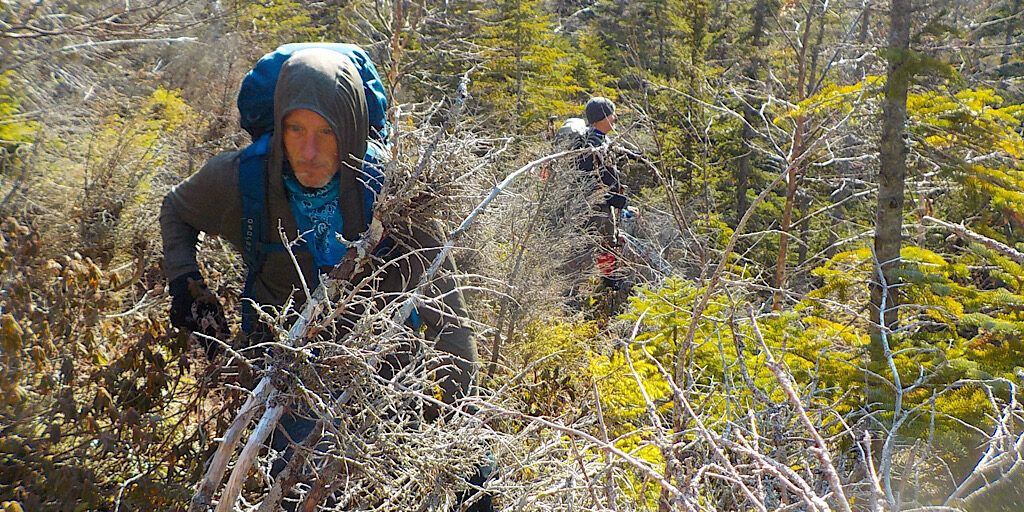 This was one of many tough sections. A bit demoralizing, to be sure, but the team pushed on.

There are even more photos. Check ’em out…