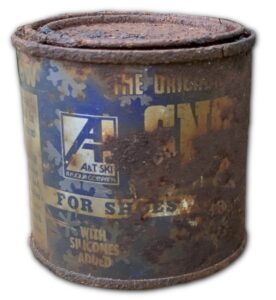 During this exploration rusted can of shoe wax from the A&T Ski Company of the ’50s and ’60s was found. The team located this item deep in the ravine nestled between some rocks out of the weather. Technically they needed to leave it be as it is surely over 50 years old and thus considered an artifact. That said, they removed it because the contents of the can were still in place and contained a petroleum byproduct. They felt the environmental concern outweighed the historical one. Assuming they would like to have this item, it will be donated to the New England Ski Museum in North Conway, New Hampshire.

On Facebook a returning guest mentioned she was hiking all the ravines and glacial cirques located on the Presidential Range. Some, with trails, she had gotten to, others, without trails, still needed to be visited. That’s where Redline Guiding came in. We asked if she had checked out Jefferson Ravine yet, and if not was she willing to do it with us from above (versus taking it by way of the seemingly longer way from Rte 16)?

The specific plan was to hike up the Ridge of Caps via Caps Ridge Trail towards Mt Jefferson, but then take the Cornice Trail around to Gulfside Trail (AT), then taking that past Jefferson Loop Trail until they reached the junction with the notorious Six Husbands Trail. From there they would approach the ravine, possibly entering from the junction with Edmands Col Cutoff. As it turned out, getting off trail began higher up taking a talus finger off the northern end of the part known as “The Beach” — named for a long lasting snowfield that forms there every winter. It was a natural, environmentally sound pathway so they took it. Moreover, they could see the aforementioned junction and it was surrounded with the dense low-growing firs, spruces, and yellow birch trees that make up the low-alpine krummholz zone. It wasn’t at all inviting. Options please.

Their first gully sort of ended. It didn’t actually end, but merged with runoff so it would have been dense, mossy, overly impactful, wet, and potentially dangerous. This took them maybe a third of the way down. The second attempt was to check out another finger south of the first attempt. They crossed Edmands Col Cutoff so took it to their new dropping-in point. This one, like the first ended, but by way of getting “cliffed out,” though they got a little further down. The next attempt was to head north on Edmands Col Cutoff until they aligned with another talus finger (a main/central gully), just beyond the trail’s midpoint. They would again drop in there. Visually it looked as if they could descend much further if they keep angling south as they went. The team continued on that until it would end, but another gully would start right next to it so they were able to make fair progress doing this crossover bit four times. They finally reached a point where things got a little steep so all they could do was to continue traversing, but it was working. They could have gotten in further, they got about 2/3 of the way as it was, but as they would reach the ravine floor they would encounter even more krummholz then an avalanche debris runout zone. Messy — but also pretty in its own way to people who admire and appreciate such things.

We want to do this again, it’s a needed thing, but we will probably come in from the Pinkham side this time. We imagine it will still be a challenge to reach the (what the team is calling Rosanna) pond located at the bottom, but a lot of the fun is in the exploration. We knew today might not work. Even that it probably wouldn’t work. Our memories had formed lines that we could travel, sighting them from a distance (looks easy from here), but Google Earth suggested it might not be as easy as we hoped for. We were realists. Reports online were scant, but we did talk to one person who used to patrol that area for the USFS gaining us some valuable, hopeful, and insightful information.

On lead for this trip was Redline Guides Mike Cherim, Ken Hodges, and Bill Robichaud. Since we only had two in the guest’s group, we were a little heavy of the guides, but this was new and interesting and the draw of exploration was too great to deny. And it was fun. The team loved it. Did they fully succeed? Well, no, but they stayed safe, had a terrific time trying, and they got to really look closely at Jefferson Ravine noting its charms and features. They just needed to see a moose standing down there. “Cue the moose.” 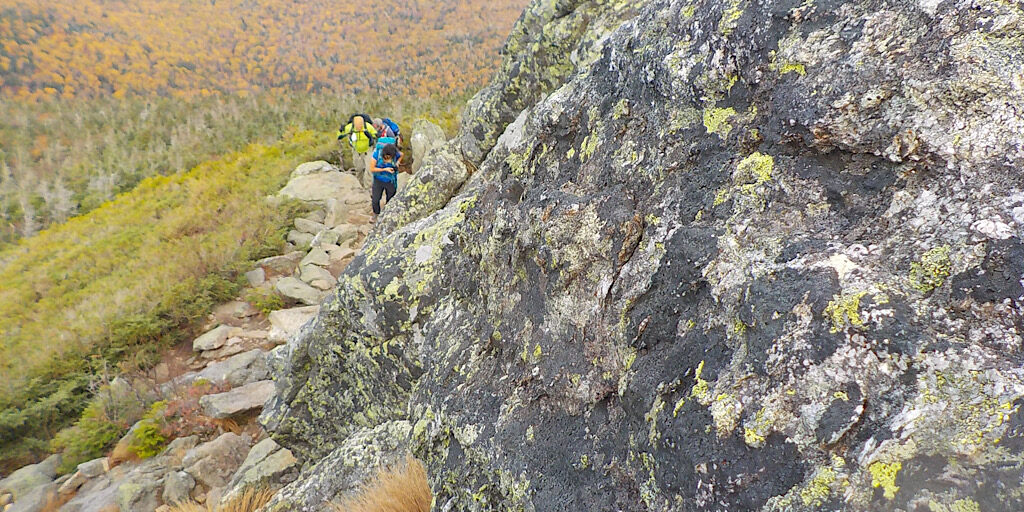 The team making their way up the Ridge of Caps. 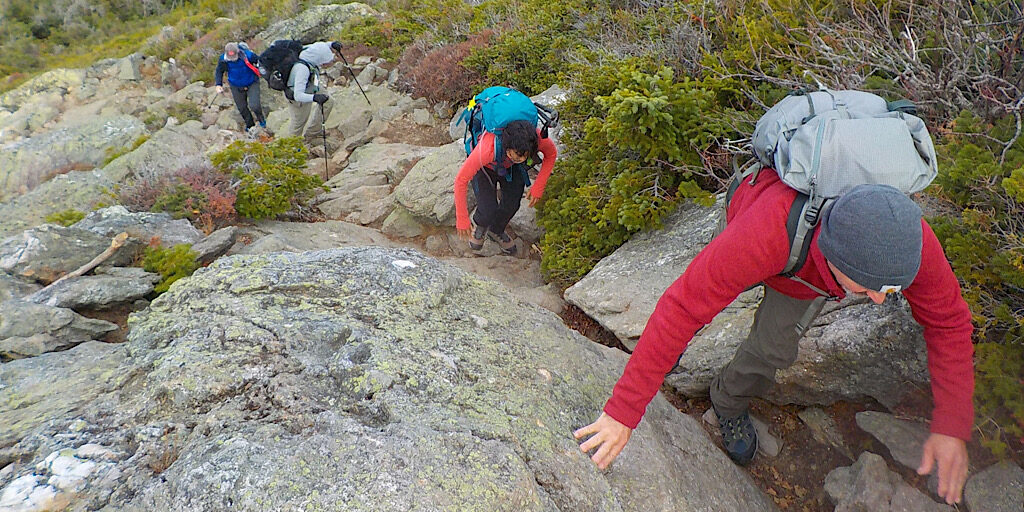 This is a fun and challenging trail. 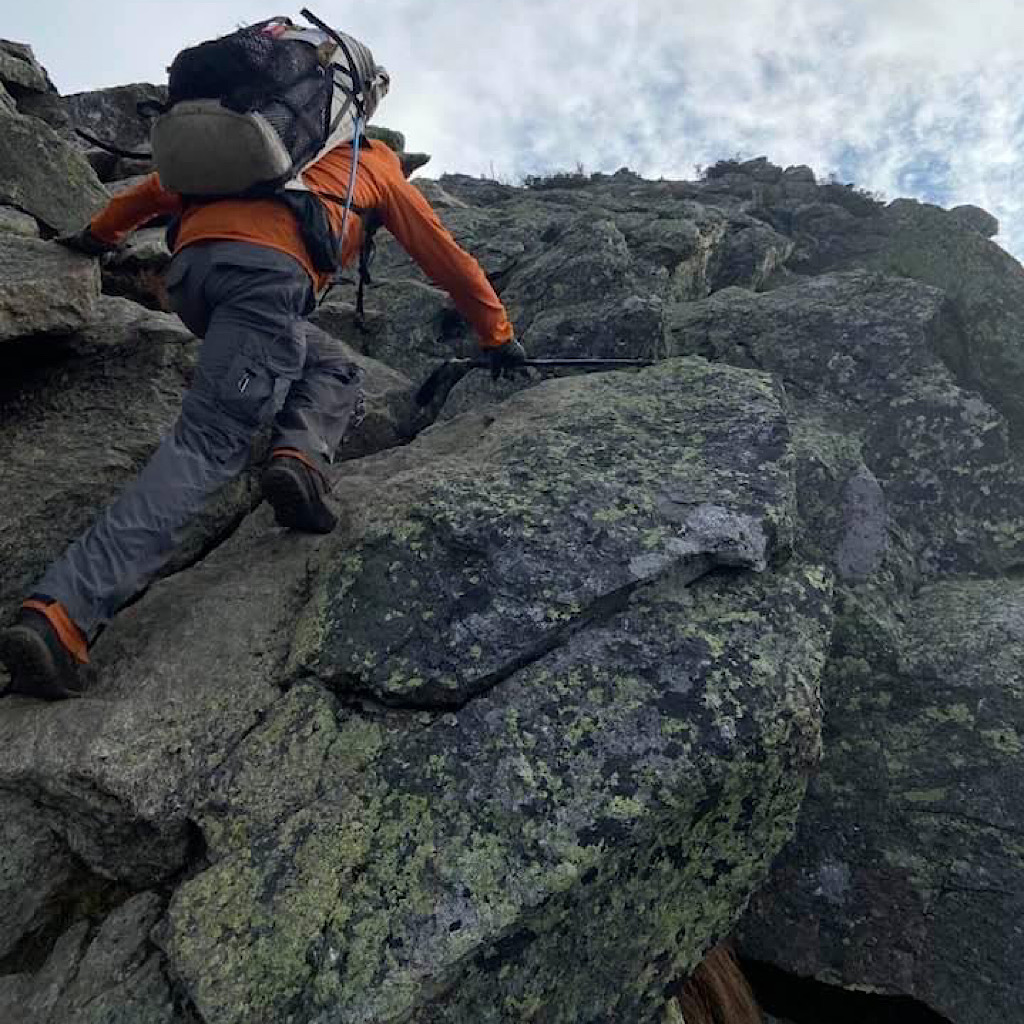 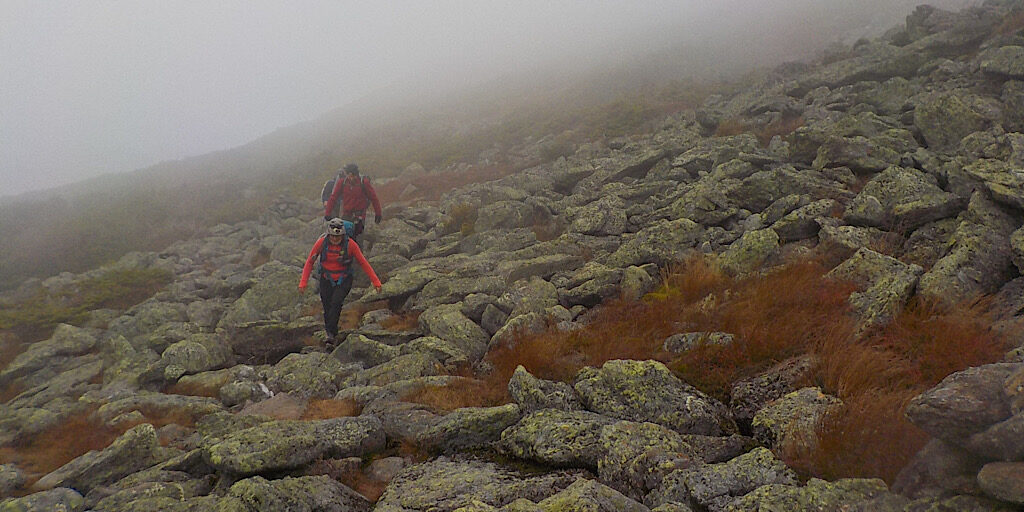 As the team approaches the ridge, they are enveloped by the clouds. 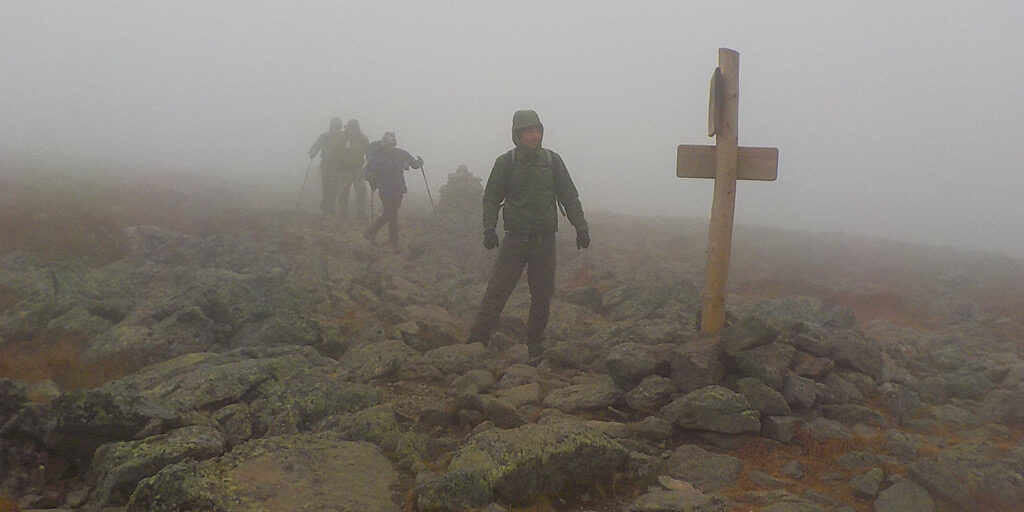 It was also quite windy, but not nearly as much as forecast. 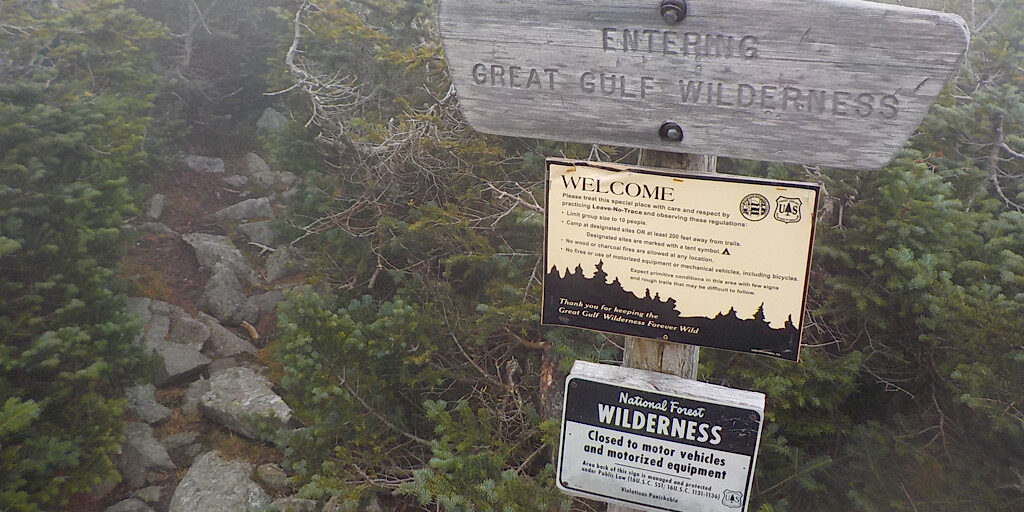 So much for driving there… no motors in the Wilderness. 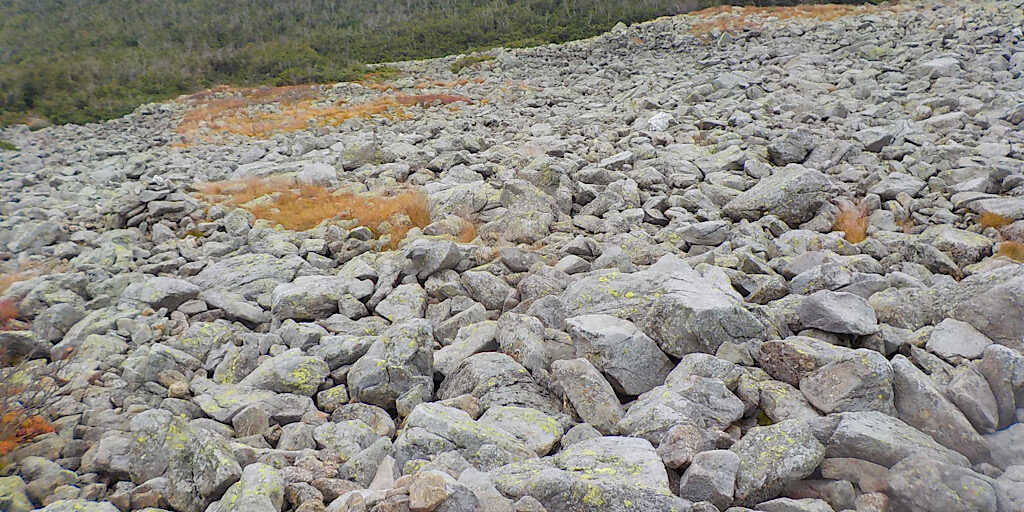 Their bushwhack began here at “The Beach” right off of the Six Husbands Trail. 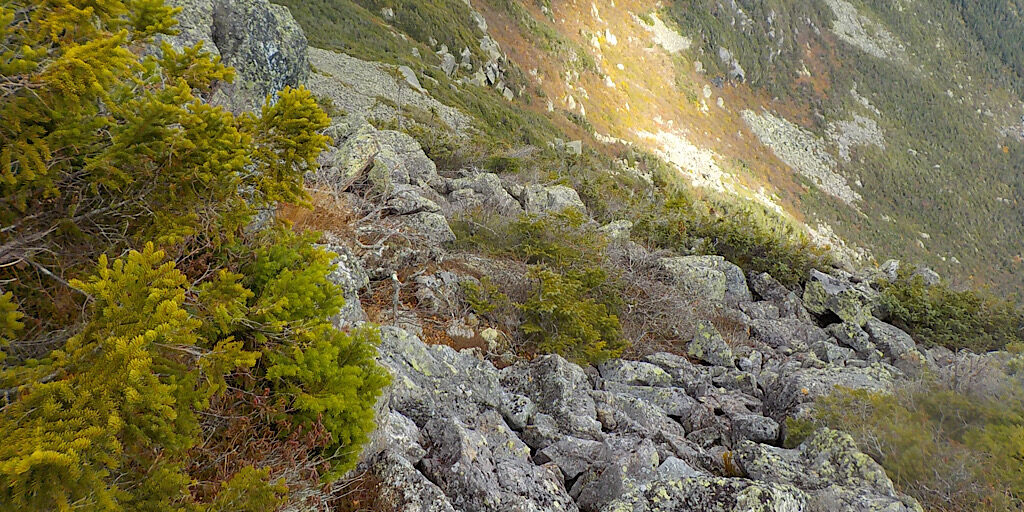 Is that the sun? They continue downward. 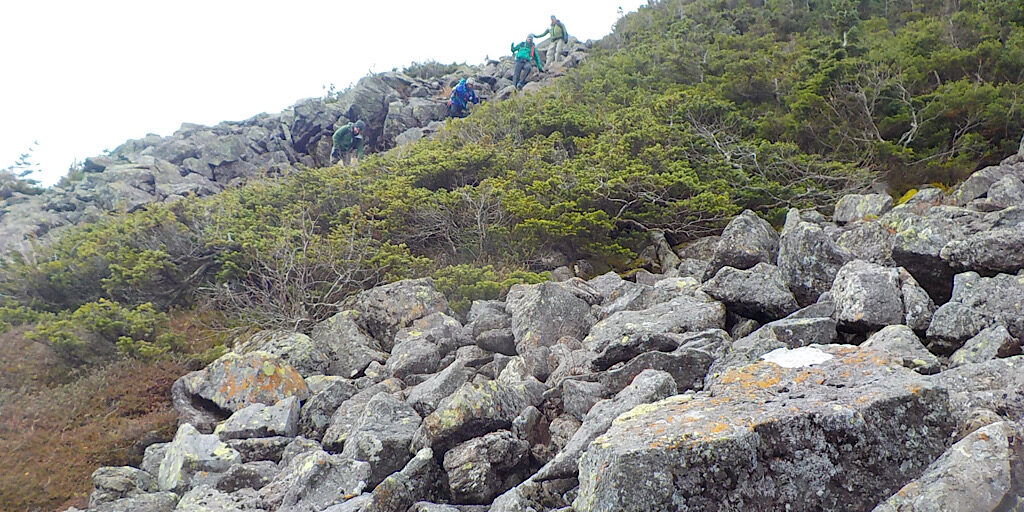 The team carefully making their way down. The rocks here, unlike many on Mt Washington, haven’t been jostled into place and can roll or shift. 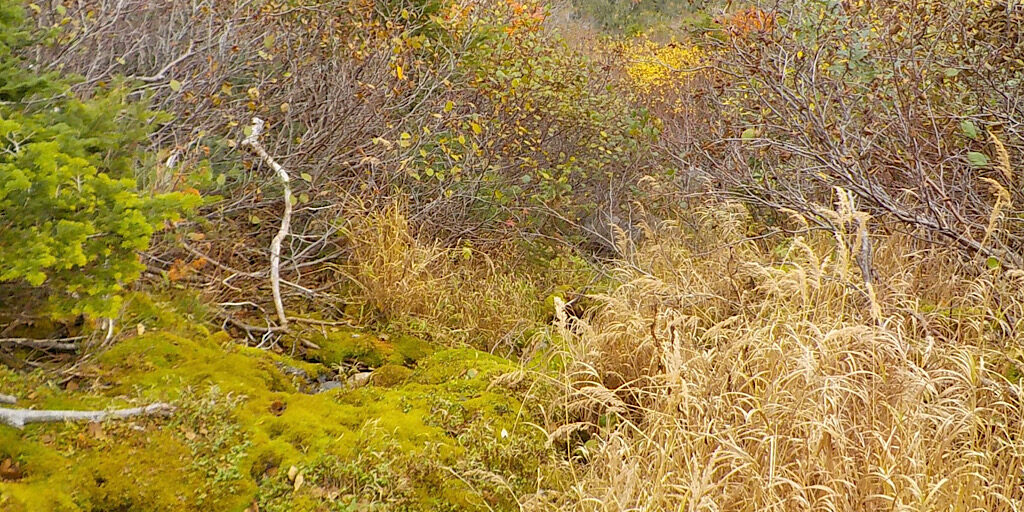 They eventually get forced into a drainage. This would be wetter/messier, damaging to the mosses, and a lot more dangerous to the team. 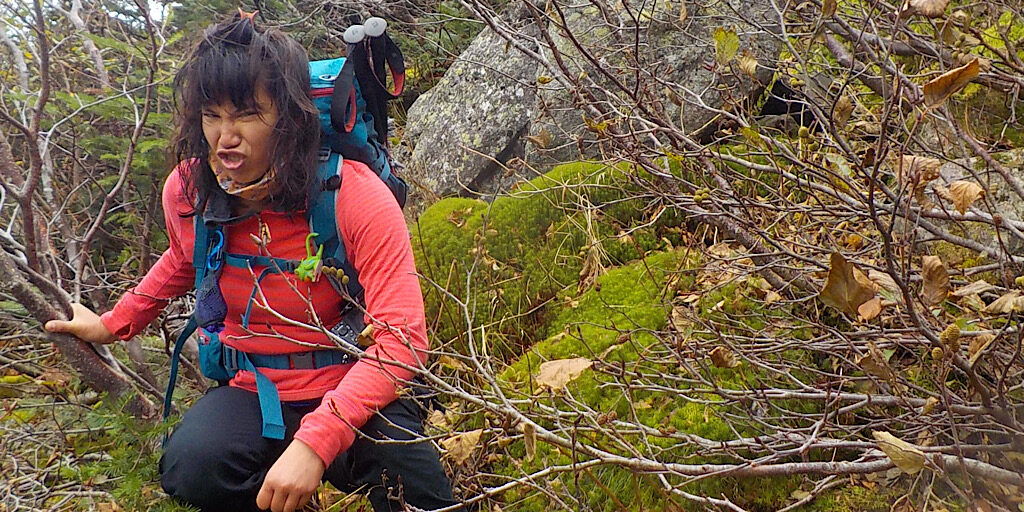 Plus it doesn’t look fun. Doesn’t that look just say it all? 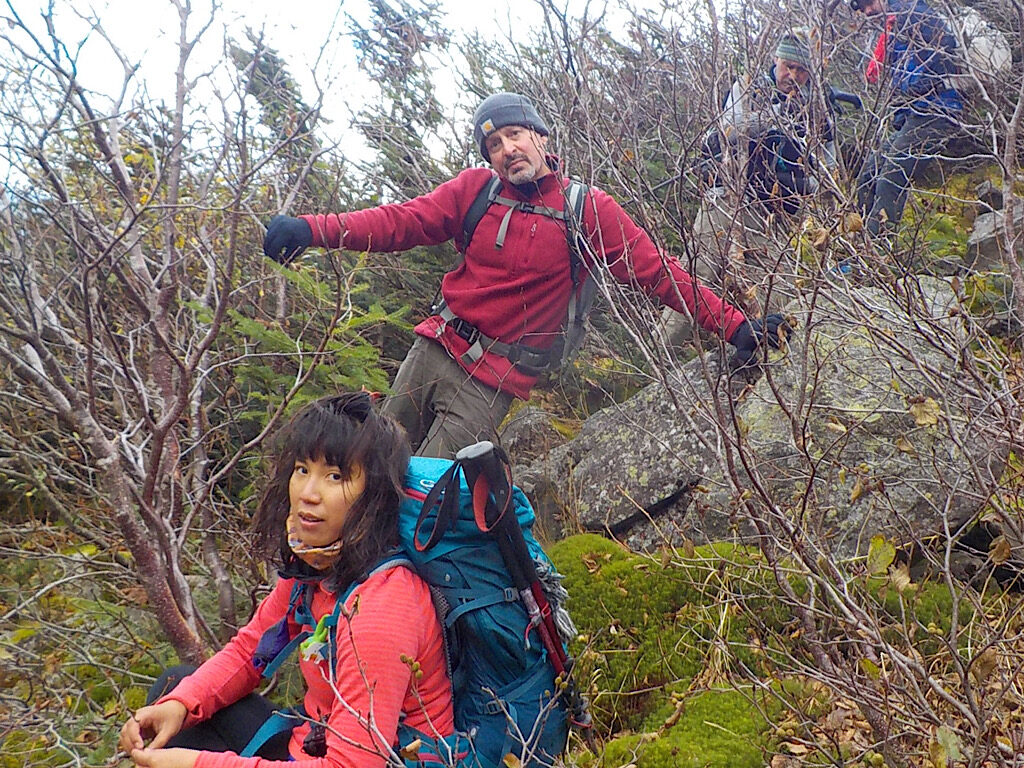 They go back up to find another route. Yo, what happened to the stoke, peeps? 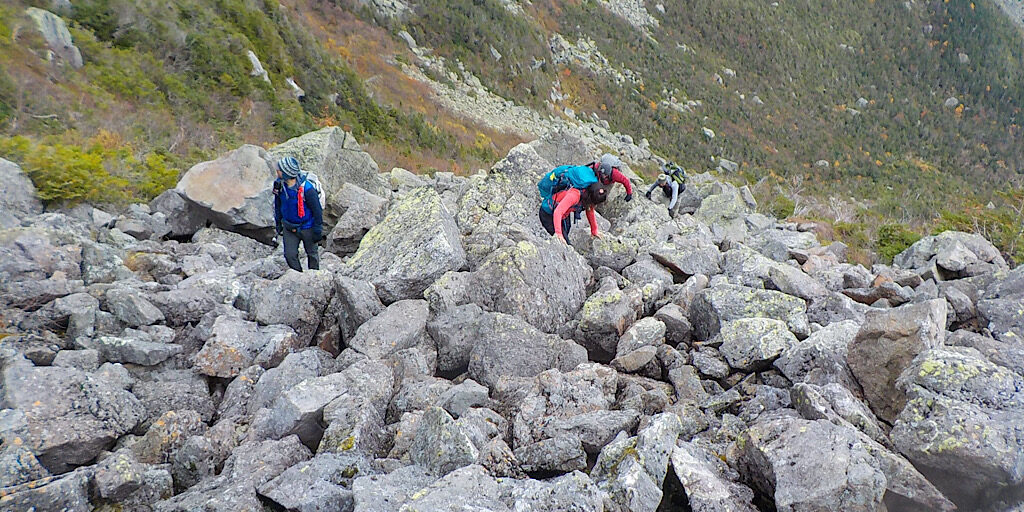 What goes down, must climb back up. What an amazing experience this is, though. 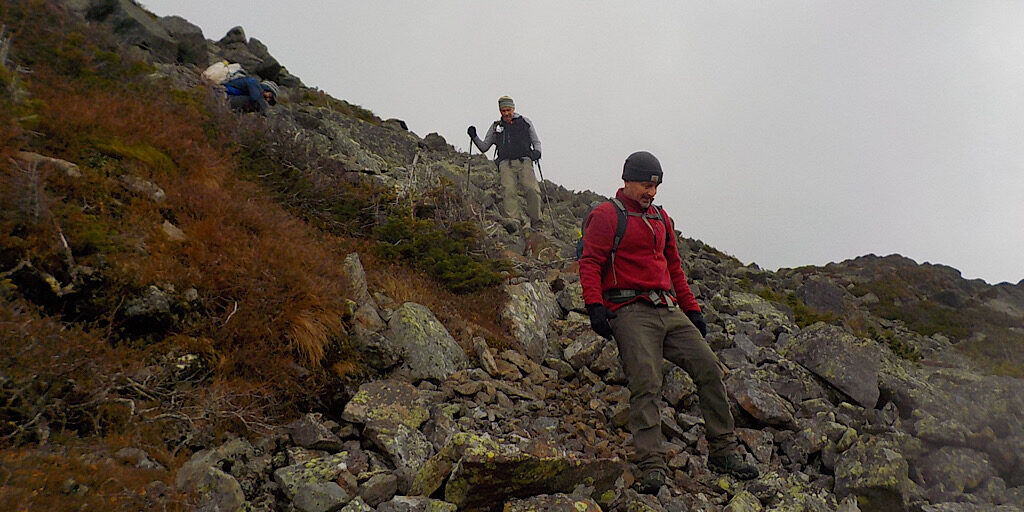 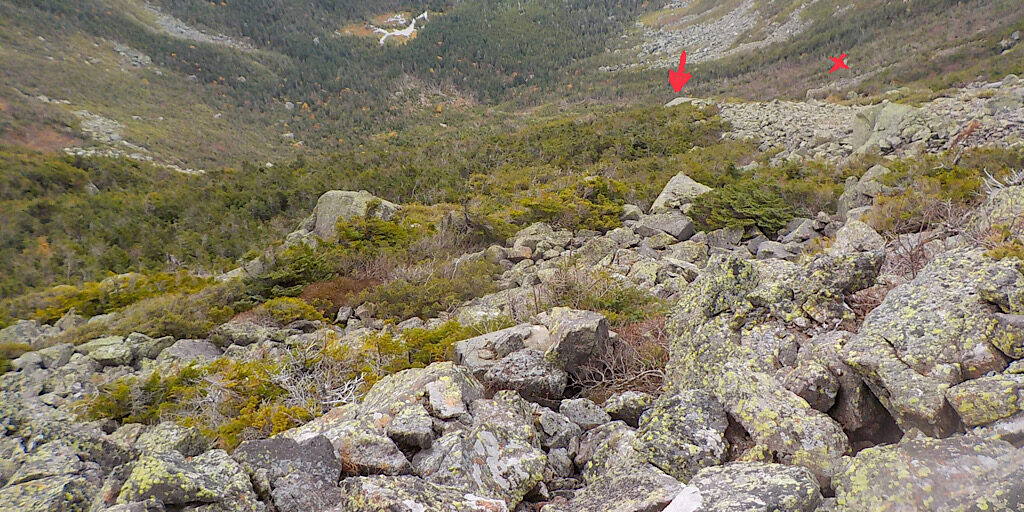 Mike continues down planning to report back. He plans to descend to the arrow, but makes it to the ‘X’ dropping another 100′ or so. With some brief struggle it would be possible to get to one more gully and descend it further, but that ended, too. 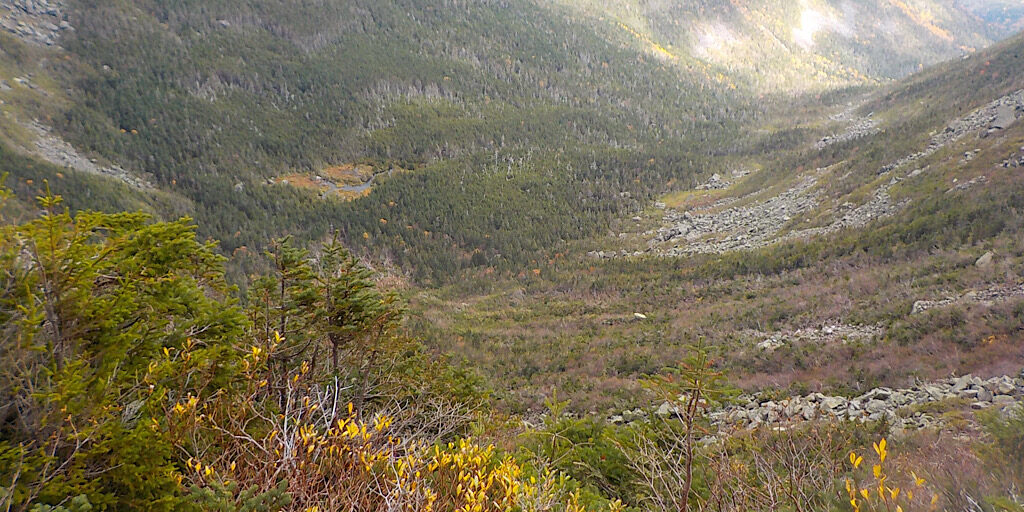 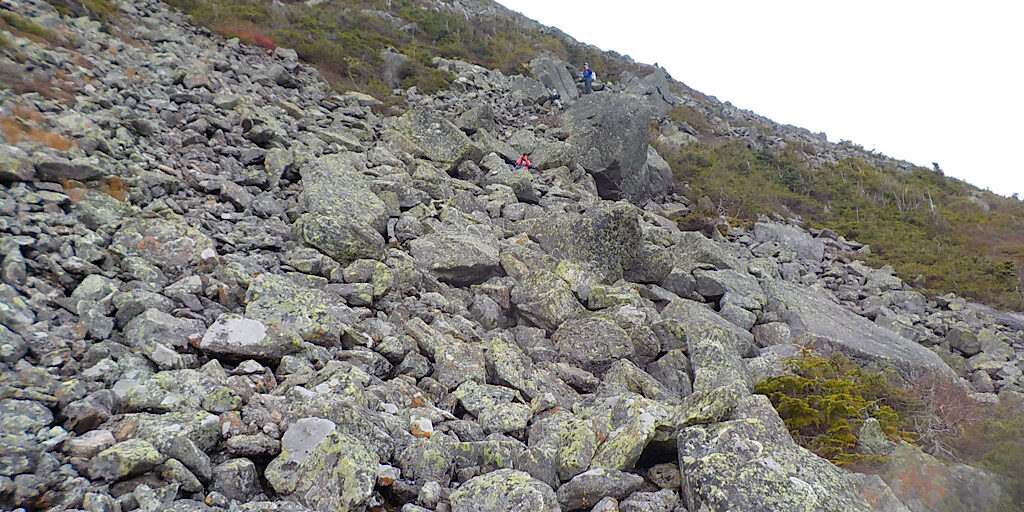 Mike climbs back up to rejoin the team. 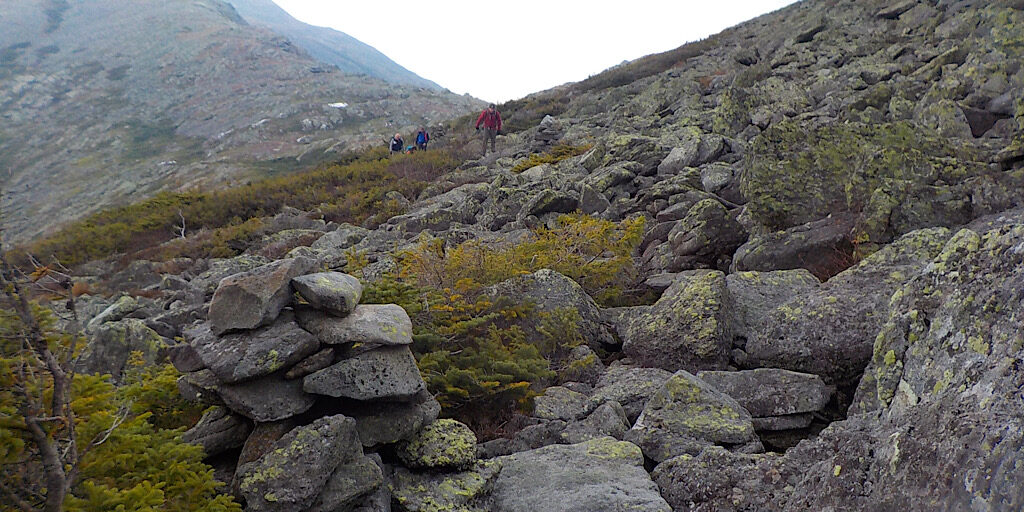 The team take the Cornice Trail to complete a loop around Mt Jefferson. 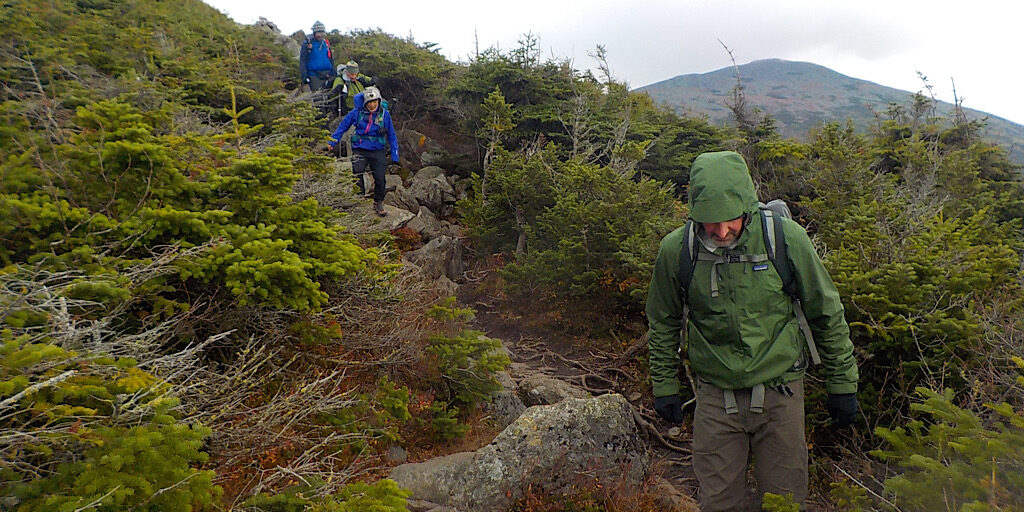 They enjoy some quality conversation on their way back down. What a fun group.

Good job, team, and thanks for again adventuring with Redline Guiding.

UPDATE: See what happens in round two.