Reports from the regions down yonder speak of brown grasses warming in the sun, awaiting their cue to rise and reach to such heights they sway in the season’s warm breezes. It seems too soon, though. Up here there is snow on the ground — and, honestly, that seems right. Sure, it is March. Spring does happen this month. But life is too short to run in that direction; we’re rather enjoying where we’re at right now. For now we can still thrive on winter fun, and so can you. The skiing is awesome, the higher elevations just got powered, and there’s call for more. And the winter hiking, snowshoeing, skiing, mountaineering pursuits, and educational courses are still rocking strong. Why just this weekend…

The plan was to ski in as far as the Brutus Bushwhack on Nordic backcountry equipment, then to stash the gear and don boots and snowshoes for the final 1.4 miles or whatever it’s up to now. That last part didn’t happen, unfortunately. Just not in the cards for that day. But the mountain will remain where it is and can be skied/hiked later. On lead for this was Redline Guide Ken Hodges. They did return with fine memories of a glorious day, and Ken brought back takes of friends met on trail like Adam, Dolores who happened to finish her 48 that day (congratulations), and even members of Team Baker. 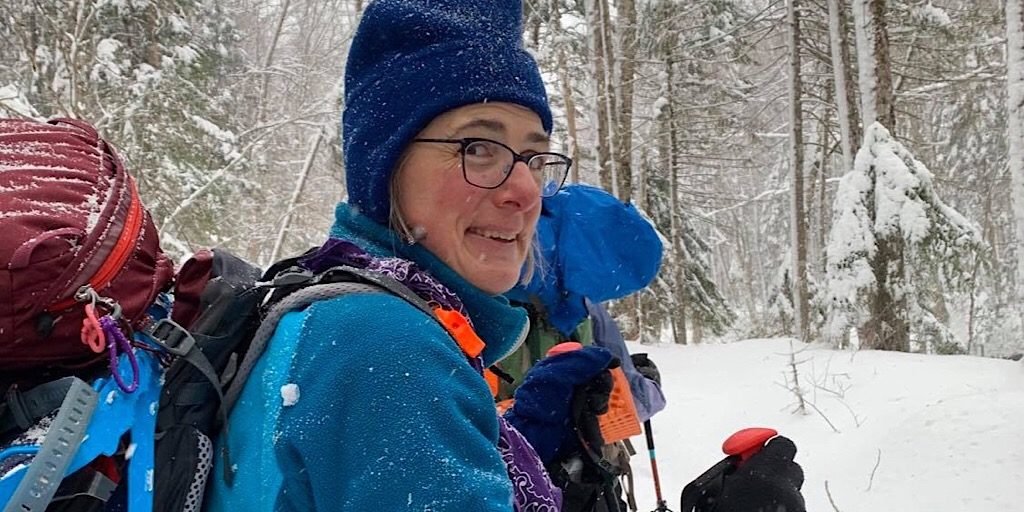 Having a guide ramped up the enjoyment by minimizing any worries. 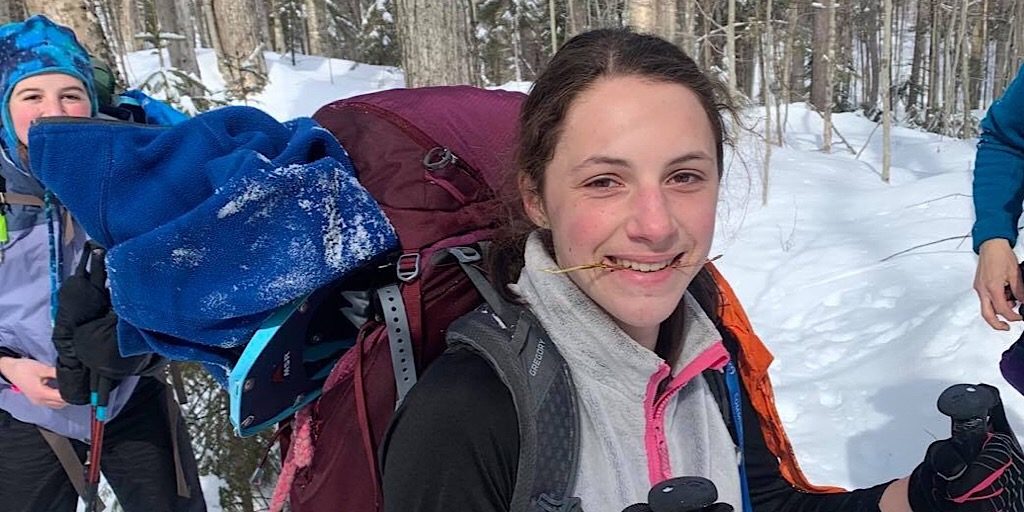 Smiles all around. Smiles with yellow birch twigs in their mouths. They were tasting for a wintergreen flavor… 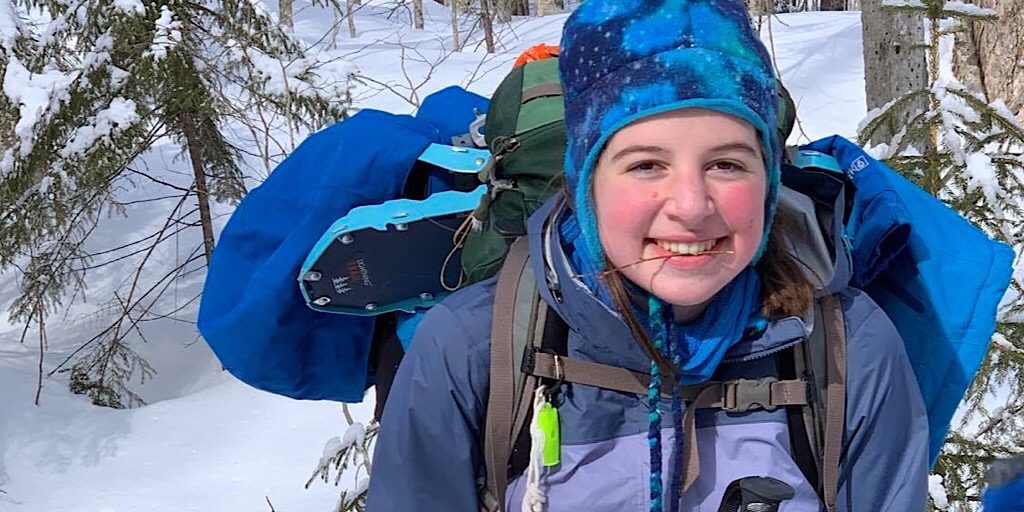 This was the result of one of several dendrology (study of trees) lessons given by Ken on the way out. 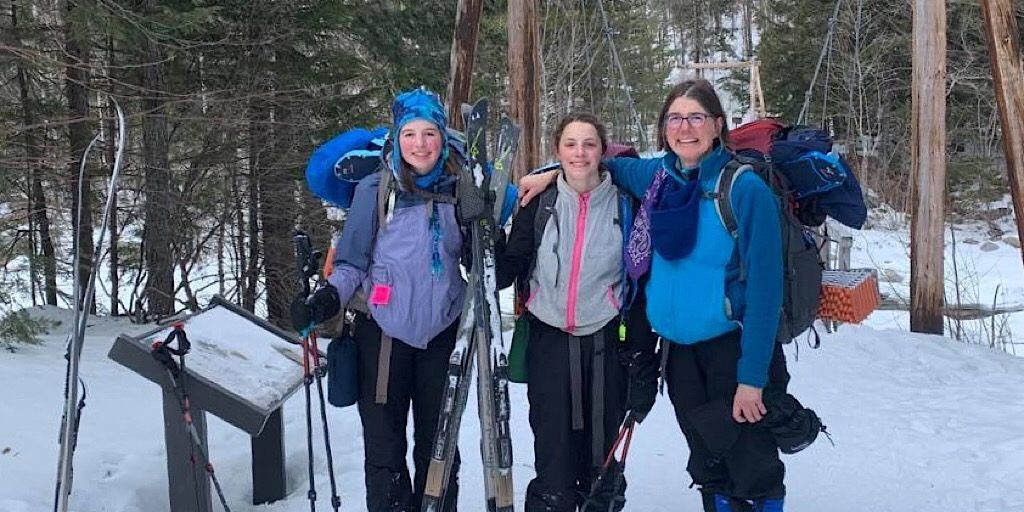 Tired but elated. Incomplete, but satisfied nonetheless. Well done one and all. Next time!

Saturday: Washington from the West

While Ken was leading a long sheltered ski through the woods, Redline Guide Ryan Mcguire was being exposed to the harsh elements on the west side of the Presidential Range and on the summit of Mt Washington. He led a single guest on a snowshoe hike to remember. Up the Ammo, battling high winds and low visibility, then down the Cog handrailing the tracks as they went. What a terrific experience. The guest said he couldn’t have done it without a guide. He’s right. Ryan was a necessity in such conditions. Congratulations on making the trip, guide and guest alike. 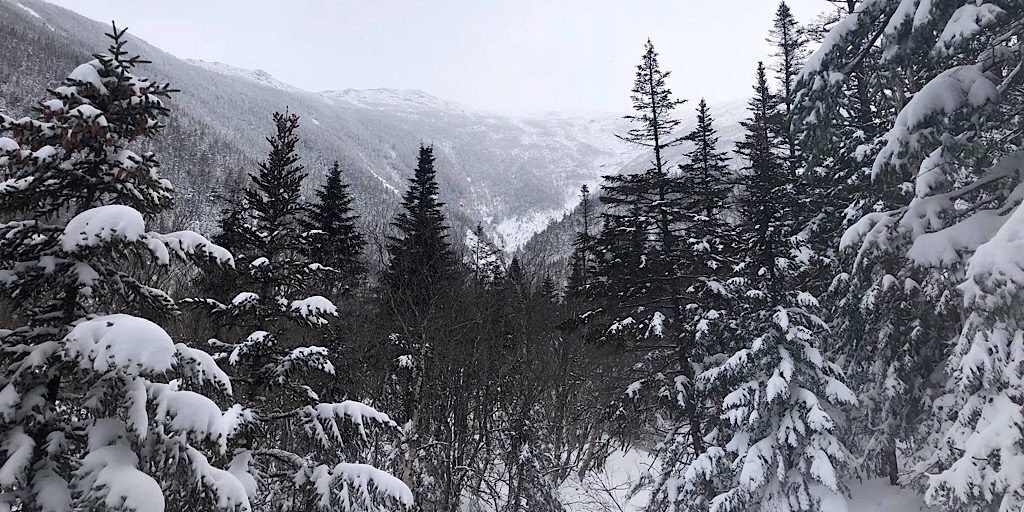 Looking into Ammonoosuc Ravine from below. Looks like there are some clouds up there. 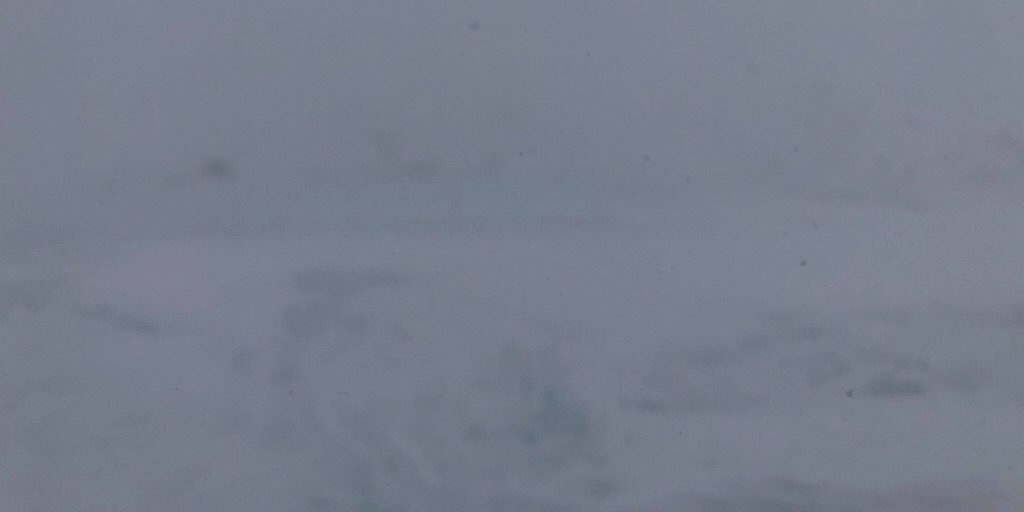 Yes, it’s confirmed. There are clouds up there. 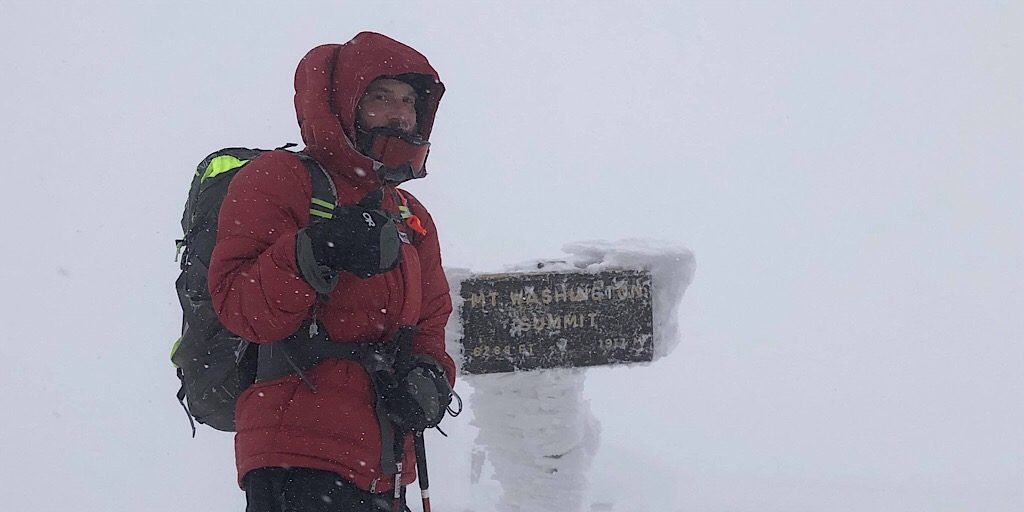 They managed to acquire the summit all the same, and more importantly they returned safely (note the Ready Pack). Great job.

Want more? Check out this ten second video showing what it was like up there, our guest clearing rime ice from the sign.

Saturday: Preparing for the PCT

While all this was going on, Redline Guide Mike Cherim was back at Basecamp sharing with a single student a private, custom-built course combining specific disciplines needed on the Pacific Crest Trail (PCT). Namely, the subjects requested were Wilderness Navigation, River Crossing Skills, and basic Mountaineering Skills. The day went great, the snow at our proving grounds was very firm offering great bite with our crampons. The same snow, however, was tough to climb without them giving us a clear appreciation. We had to take them off for self-arrest training — it’s a must. The self-arrest training wasn’t terrific. The firm conditions made performing a proper arrest a bit hard on the body, limiting our attempts. Safety first. 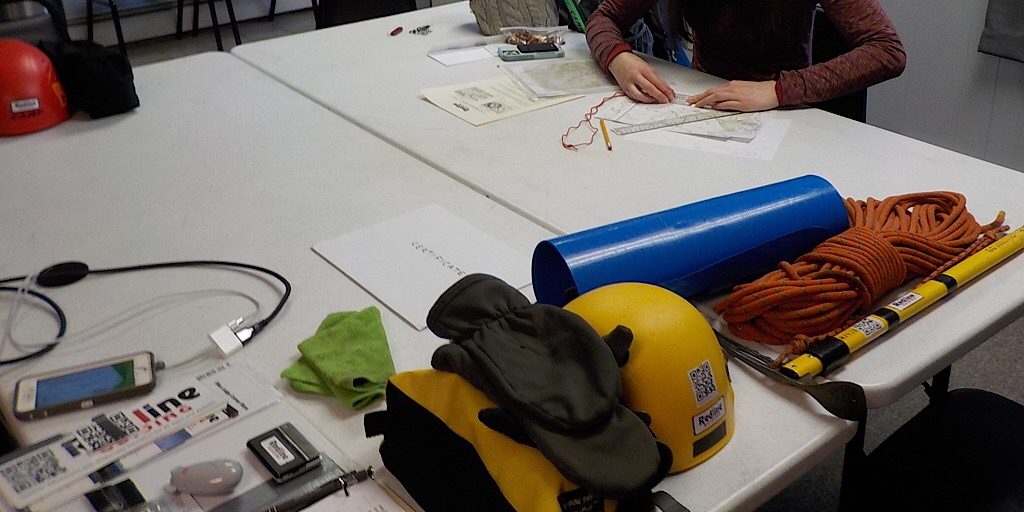 Some of the tools of the day. 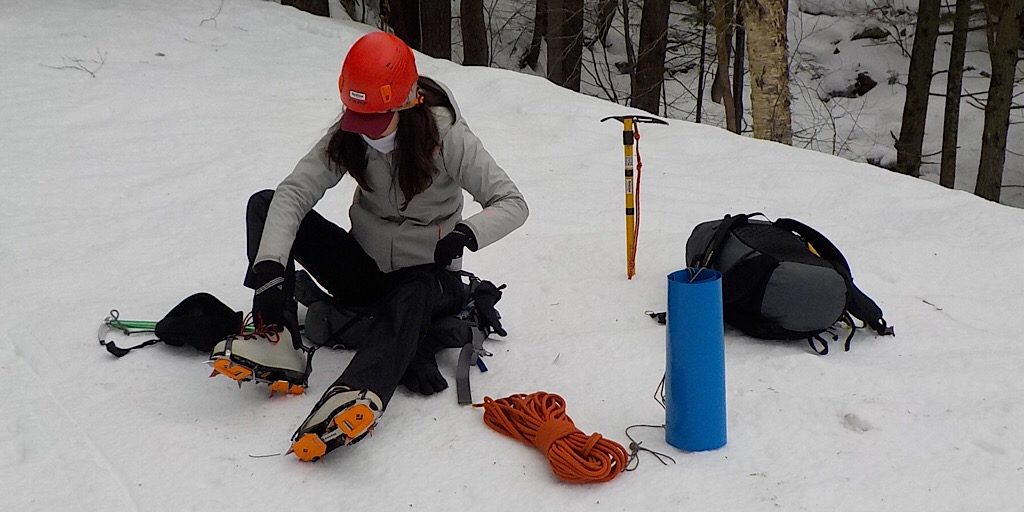 Mountaineering training was in the afternoon. Crampons are going on. 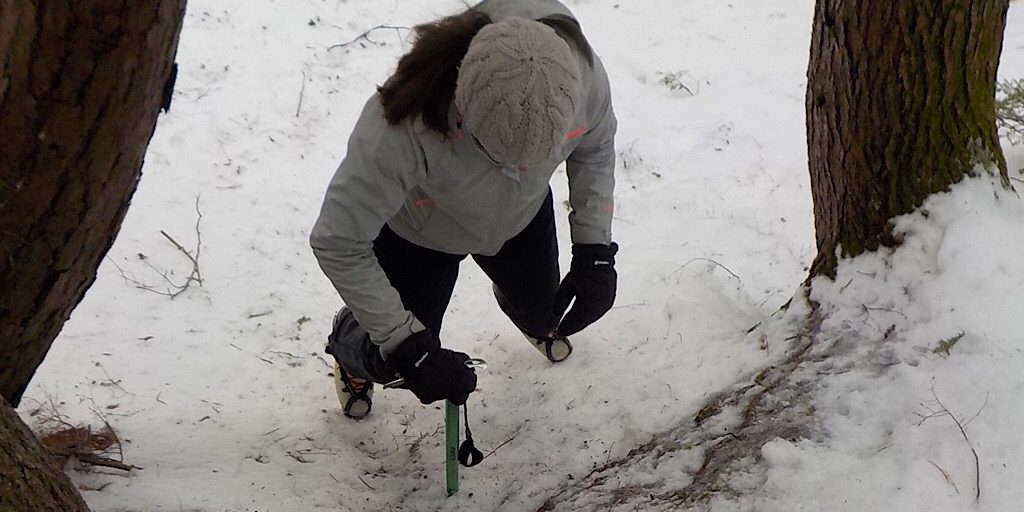 Krankenwagen! Our students will get the reference mentioned while front pointing or doing the German technique.

We hoped the skies would be clear for our guest, despite strong winds, but the clouds stayed put. It’s okay, we know he plans to come back for more. This hike, if you will, was a test run. To establish a benchmark so to speak. Pierce was just the start. We expect this fellow will be returning and stepping up his game as he goes. On task for this lead was Redline Guide Mike Maciel. Mike hasn’t done a lot with us, but we plan to change that soon. Congratulations on the summit. 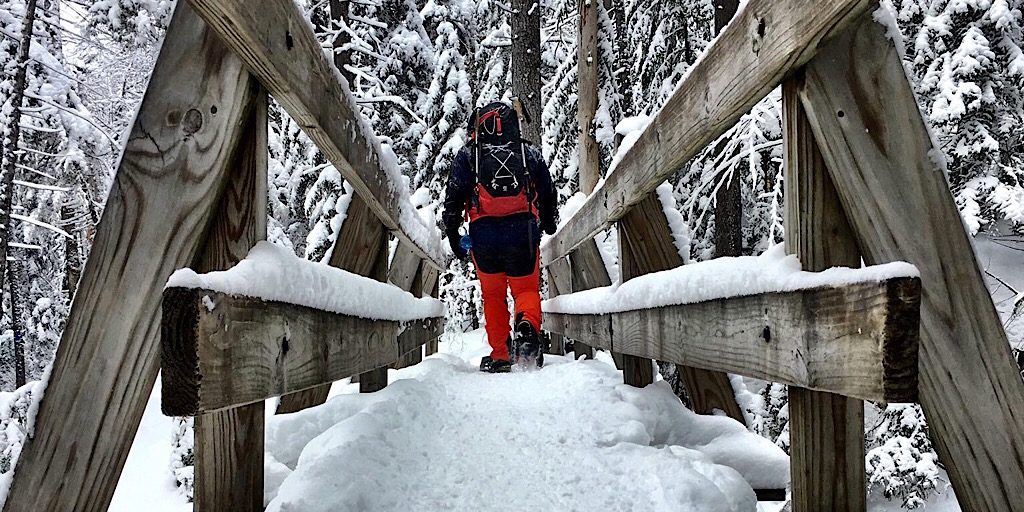 The bridge on the Crawford Connector. 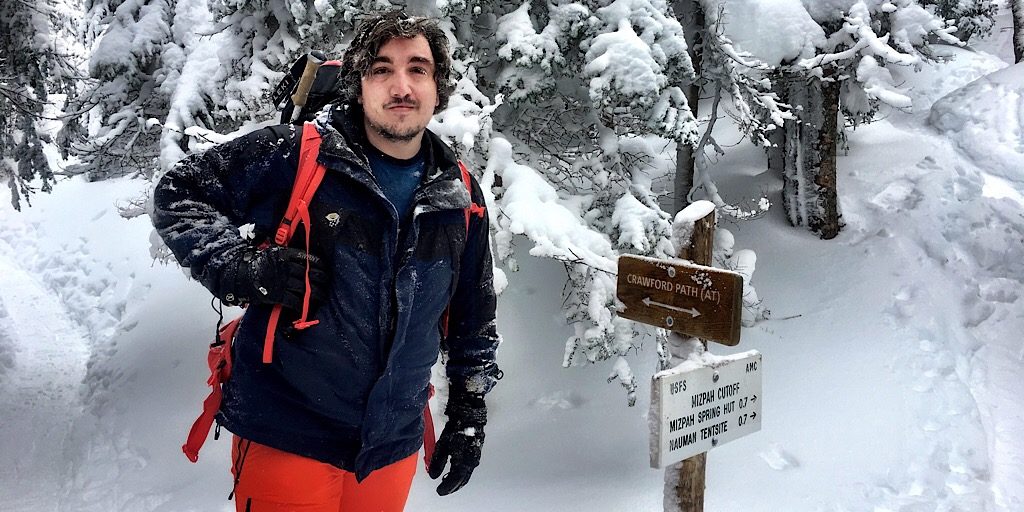 Serious progress being made. The snowy trees formed a tunnel on the way up. 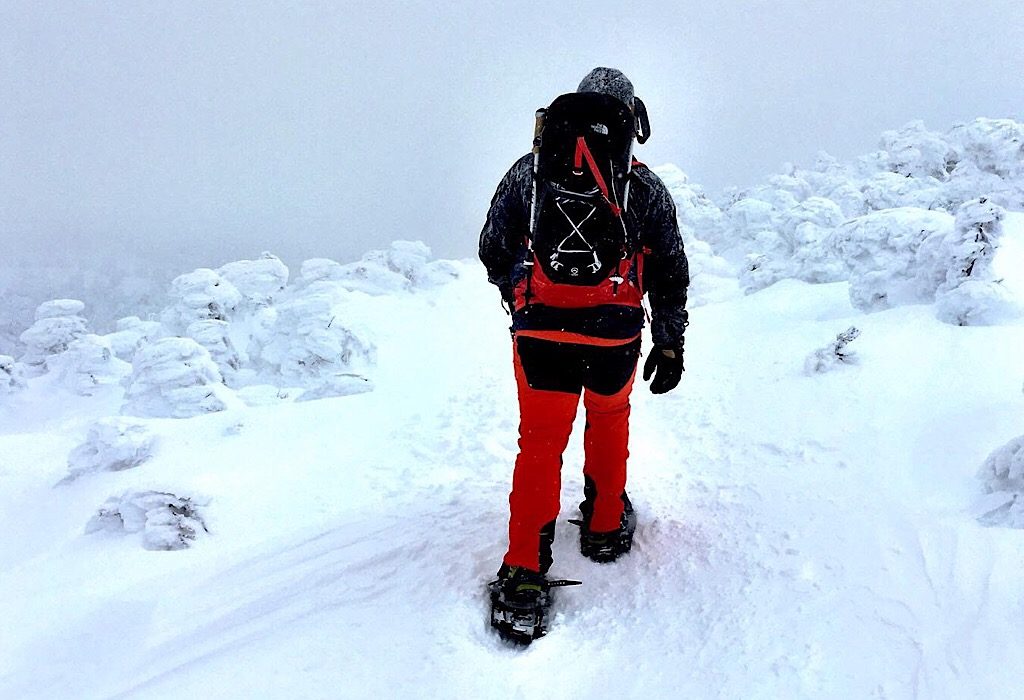 […] many of them turned around at tree line or at the junction sign when they got into the wind. I asked him how he was feeling and if he wanted to go for it. He did. Called his parents on top and they told him getting up is optional, getting down is mandatory ala Ed Viesturs, so we took care of that too and got him down in one piece. —Mike Maciel 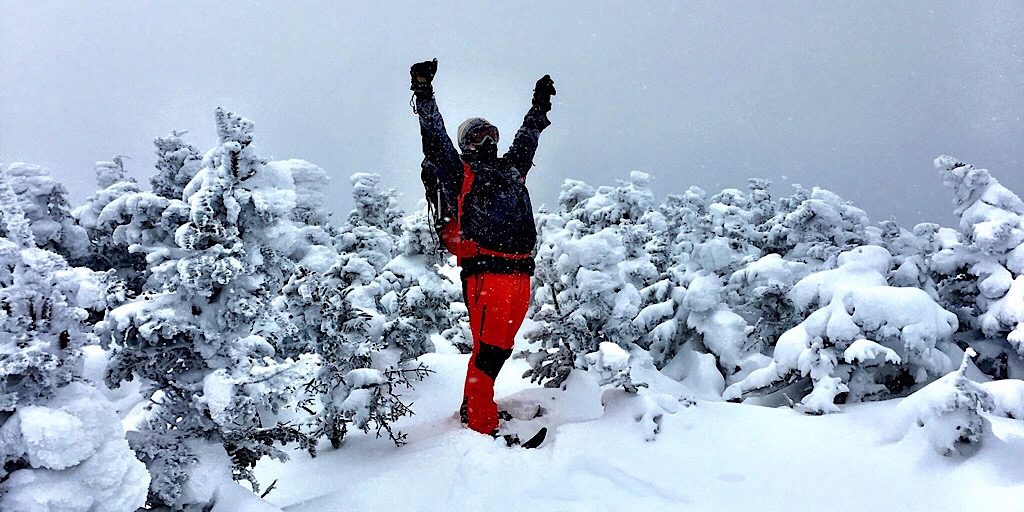 Sunday: Washington from the East

Leading his second trip of the weekend up the Rockpile was Redline Guide Ryan Mcguire. This time they proceeded up the winter route of the Lion Head Trail. Based on the photos, it was pretty dramatic up there. Beautiful, surreal, sublime. And windy. This trip, too, resulted in a successful summit and safe return. Well done. 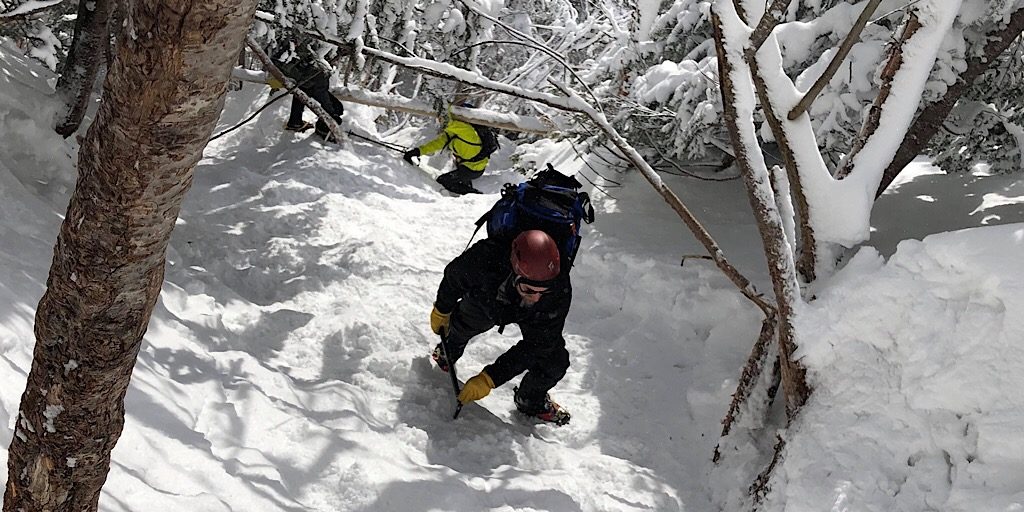 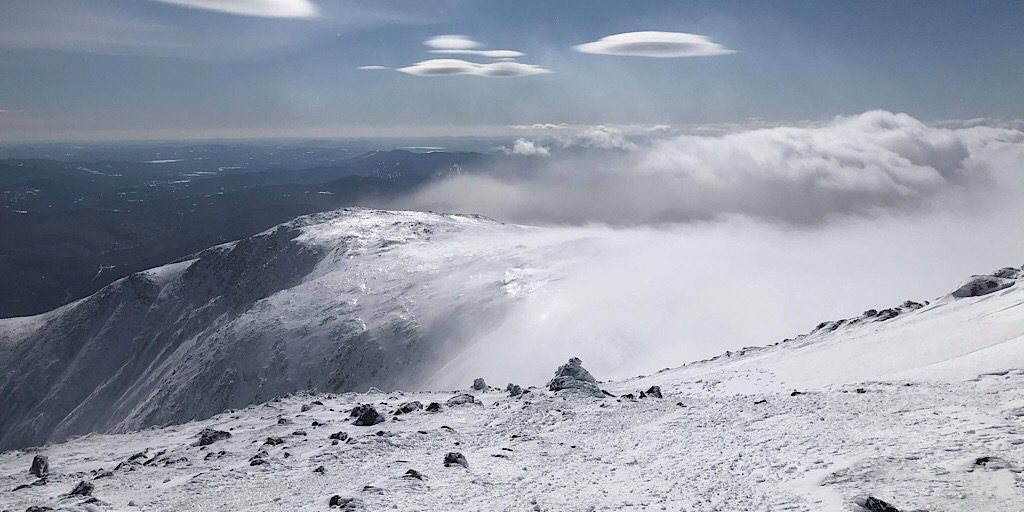 The clouds poured in from the southwest. 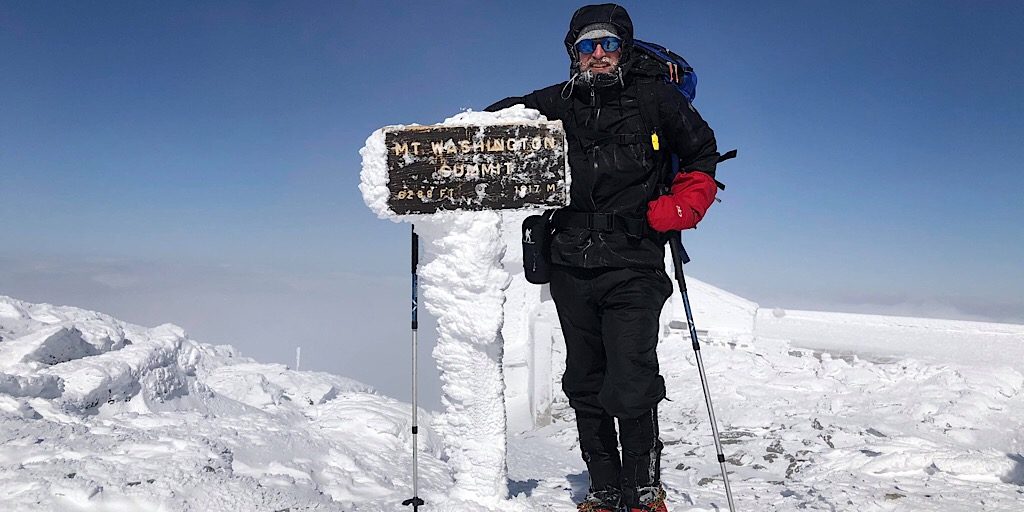 Great job on the summit. 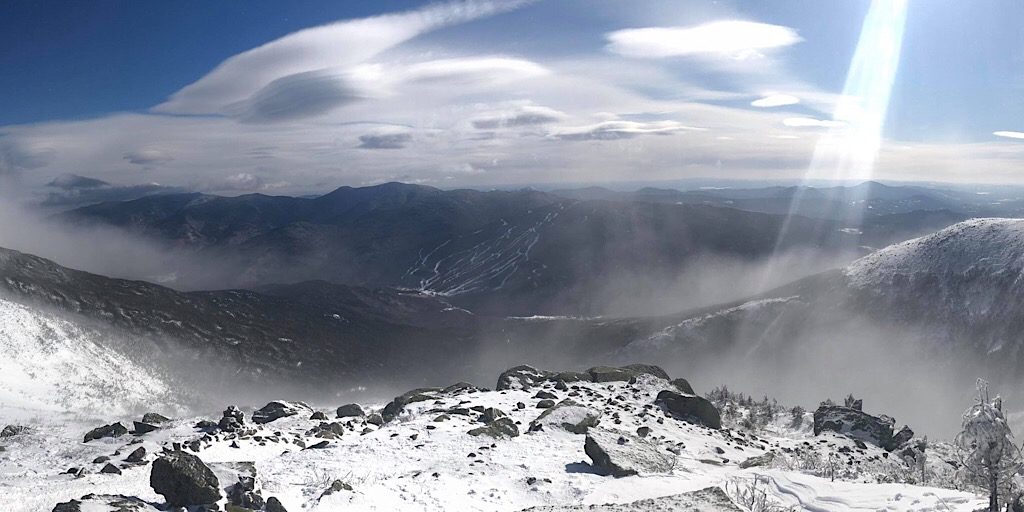 Want even more? Check out another nine seconds showing what it was like up there one day later — sunny and windy.

Kudos to everyone for their efforts this weekend. Thank you to our guests for choosing Redline Guiding.