To say this is an amazing experience in an amazing place is actually a huge understatement.

They started at the southern end of the Presidential Range with the intention of hiking its entire 18.5 mile length. In the lead was Redline Guide Katie Vaughan. In her charge were two ladies, sisters, from south of here, namely Tennessee and Pennsylvania. With Ryan’s help they spotted a car the night before, and being that this was a multi-day hike, the reservations had long been made at two of the AMC’s high huts: Lakes of the Clouds and Madison Spring. They were packed and ready for this awesome adventure. They got on trail at 9:00am at the base of the historic Crawford Path and began their arduous ascent upward to the crest of the ridge, situated literally thousands of feet above their heads.

They hiked for a couple of hours until they reached the Webster Cliff Trail junction acquiring the top of the ridge, then quickly diverted to the summit of Mt Pierce (4310′), only the first of three of the 4000-footers they would take on this first day. After visiting this first peak they continued northward, now mostly exposed to the elements in the alpine zone.

Stunted fir trees occasionally offered some protection as they made their way to the next mountain along the ridge. To many, this terrain is described as alien because it’s nothing they see on the parts of the planet they frequent. It’s barren, rocky, with grasses and other rare plants littering the spaces between the rocks. Lichens call this home tinting the entire landscape with a dull shade of green. Many say it is “otherworldly.” Us included. It’s such an amazing place.

After some effort and more climbing they reached their second summit of the day: an even taller Mt Eisenhower (4780′) — as you may now sense, being on the ridge didn’t mean the climbing had ended. Now they hiked the contours of the ridge while ever gaining ground at the same time, higher and higher. This second summit is nearly devoid of all life, it’s dusty reddish rock littering the landscape in all directions. At the center of its domed summit is a giant cairn, except this one is always in a state of disrepair because some people try to climb the cairn as well. We don’t recommend this.

The trio moved on, the next summit Mt Monroe (5384′) stood like a rocky knob atop a long ramp of sorts. Slowly, however, they made progress. Along the way they enjoyed their time and the beautiful weather. When booking a hut it’s usually done long in advance so have to take the weather given to you on your day. The sisters lucked out. So far, anyway. Their next mountain may have other ideas. Before long they dropped off the shoulder of Mt Monroe and could look down at the hut. Their bunks waiting for them, the hut workers or “Croo” preparing a dinner for the guests.

Later that evening, after dinner, the team ventured back outside to watch the setting sun. This is what it’s all about. Up here in the clear air, their senses on overdrive. To say this is an amazing experience in an amazing place is actually a huge understatement. Some will say this is God’s country. We won’t argue with that. It’s beyond-words special. These words you’re reading are really nothing more than a weak attempt to describe it. (Keep reading the text.) 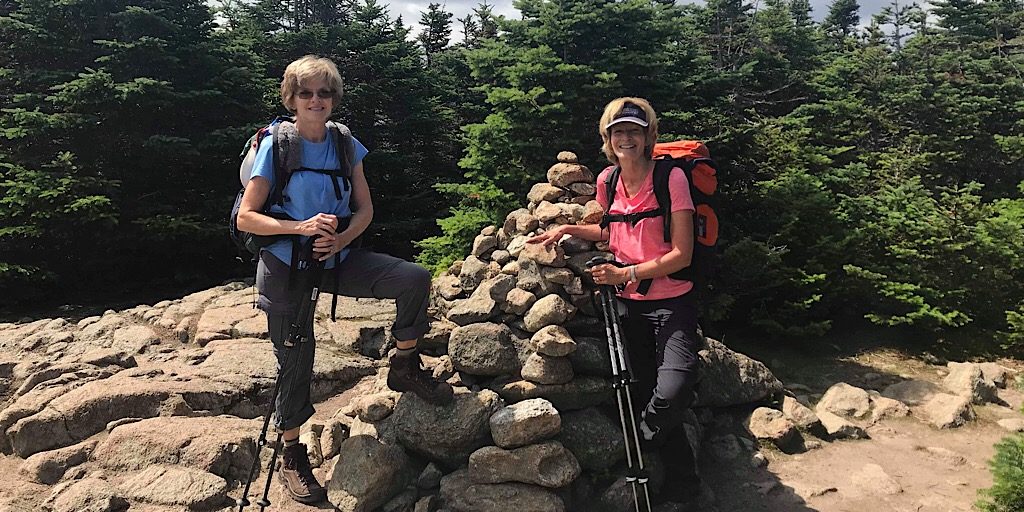 Mt Pierce, situated just above “treeline” is the team’s first peak of the hike. 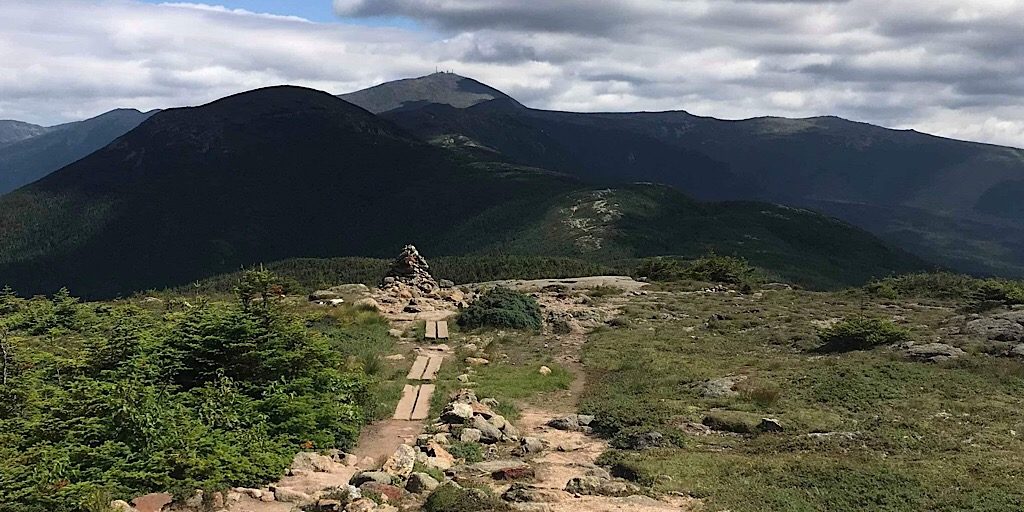 Everything in front of them and more will be hiked. 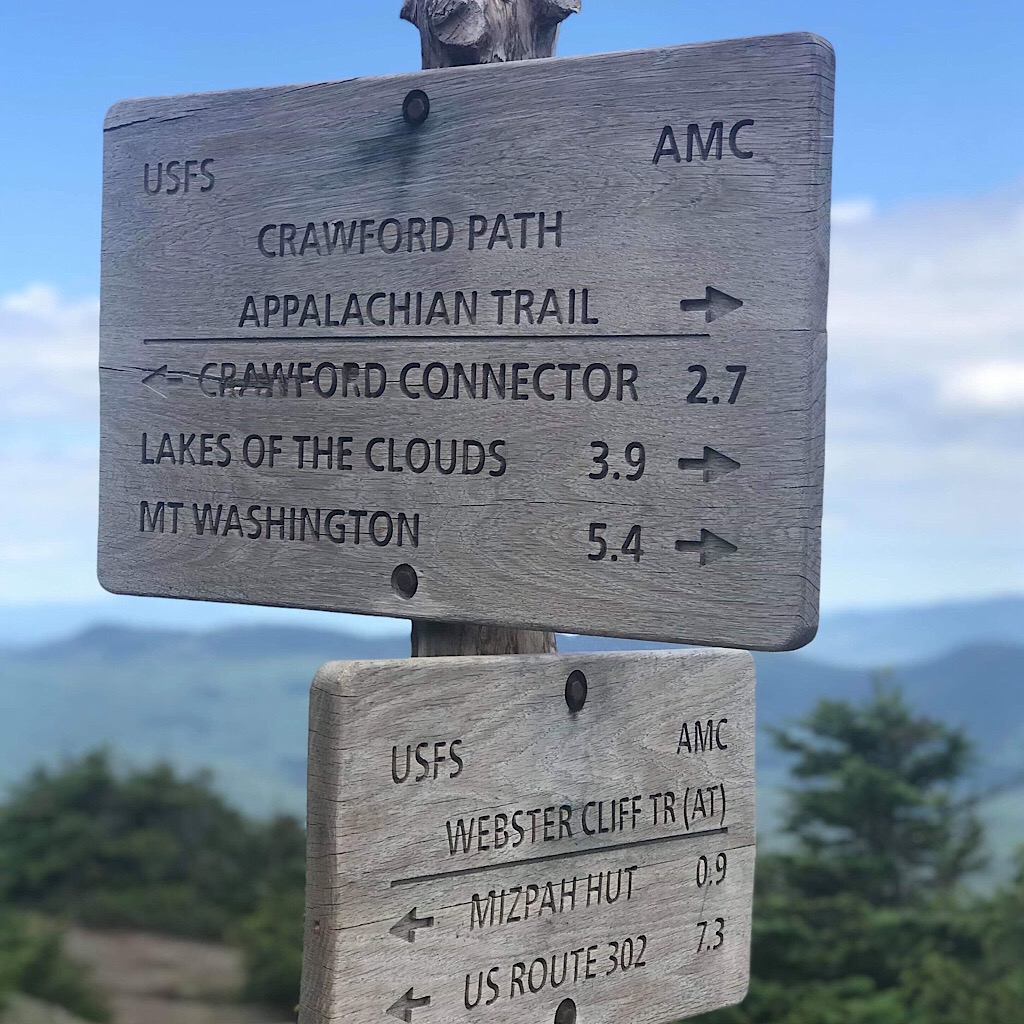 The Crawford Path is the oldest continuously-used hiking trail in the United States. 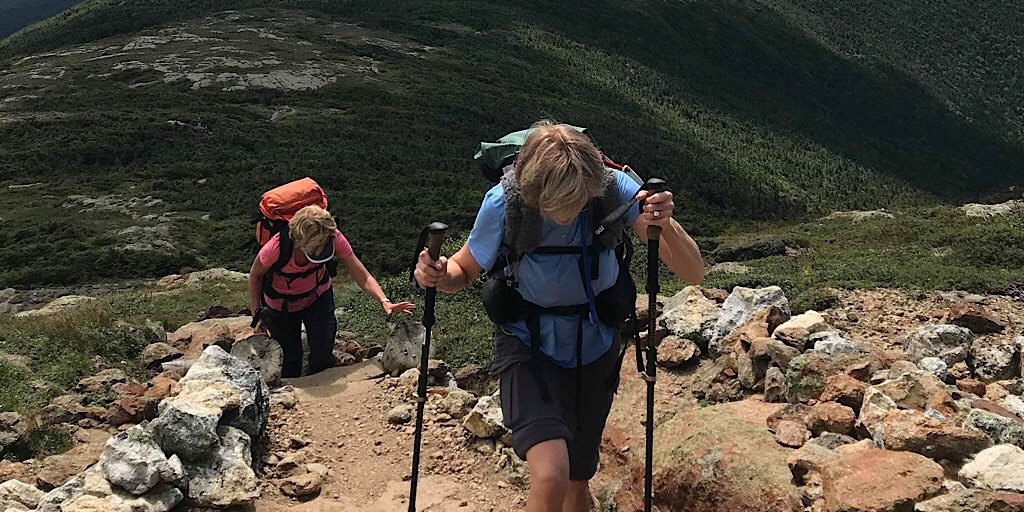 Northbound, next they climb Mt Eisenhower. 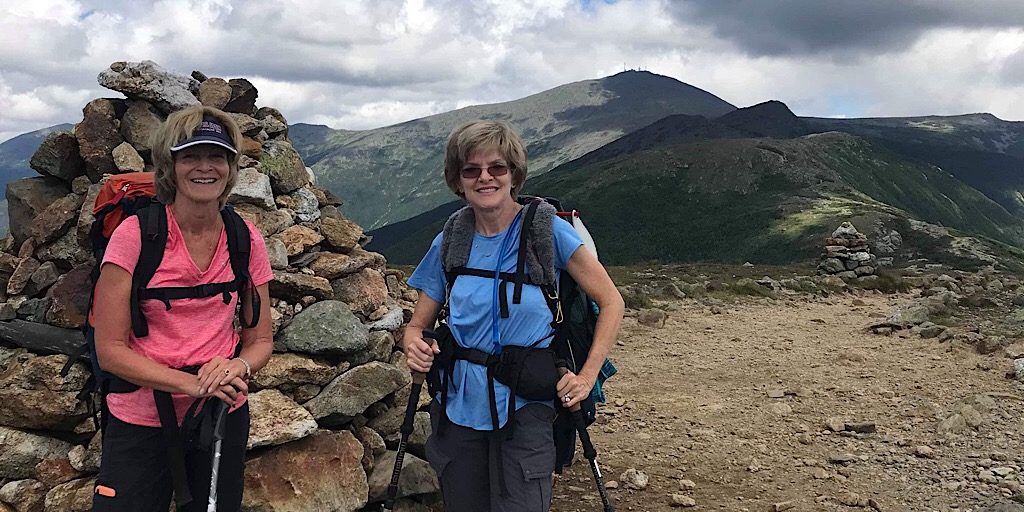 Another summit gets a check mark next to it. 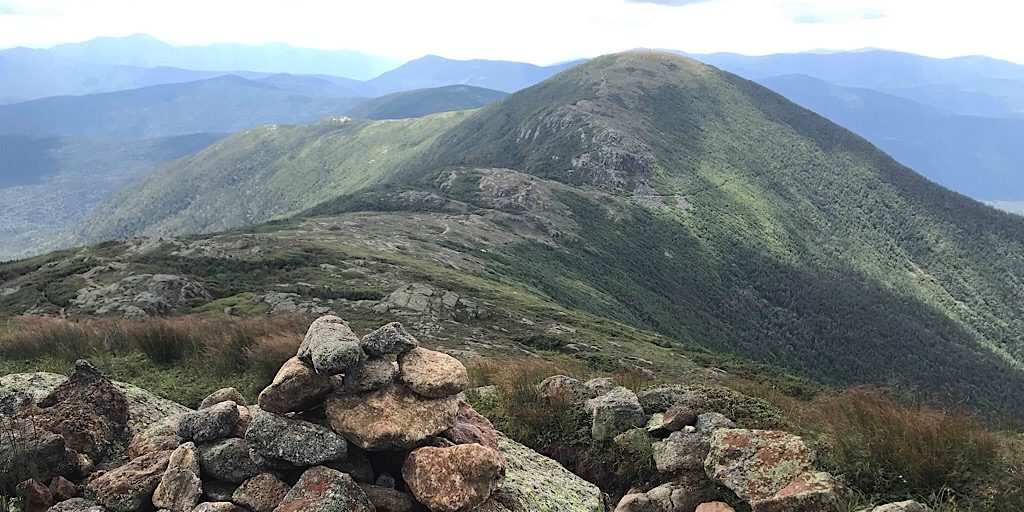 Looking back at their progress so far. Impressive. 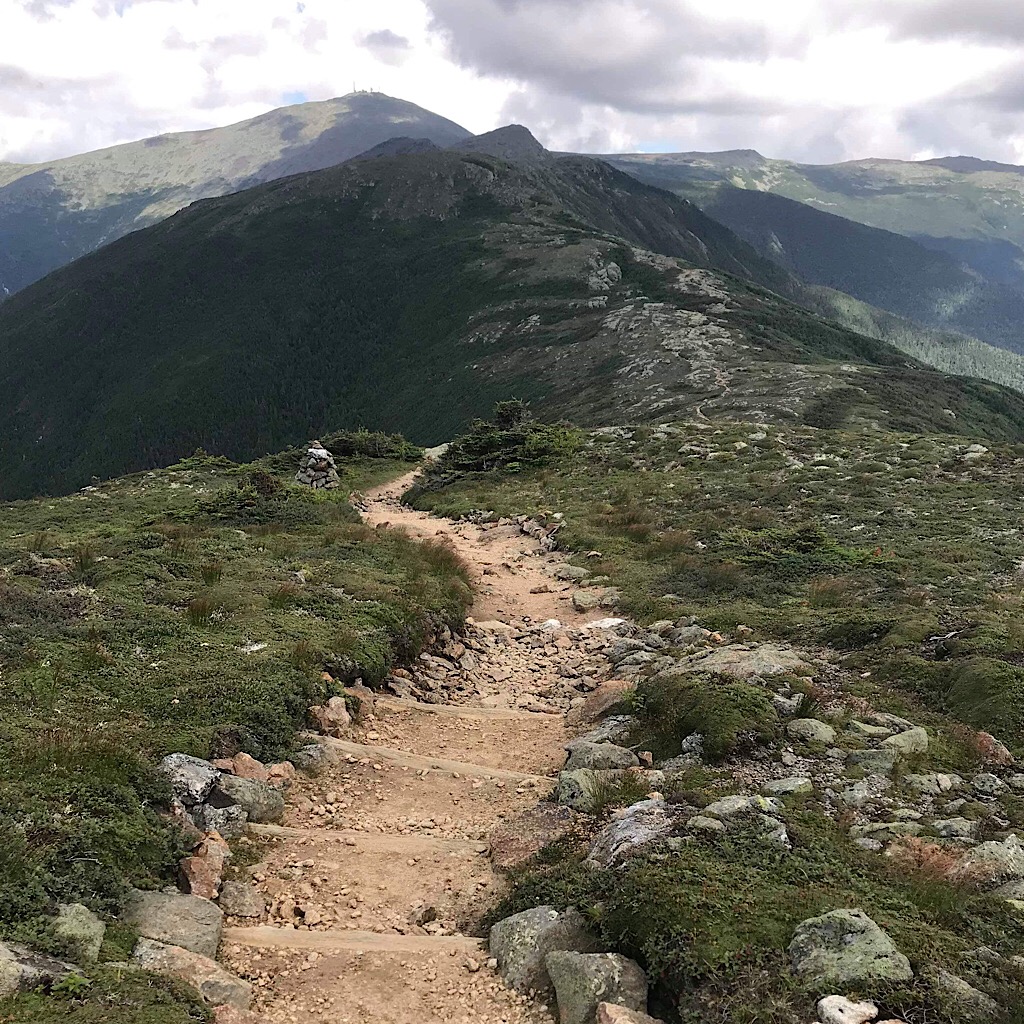 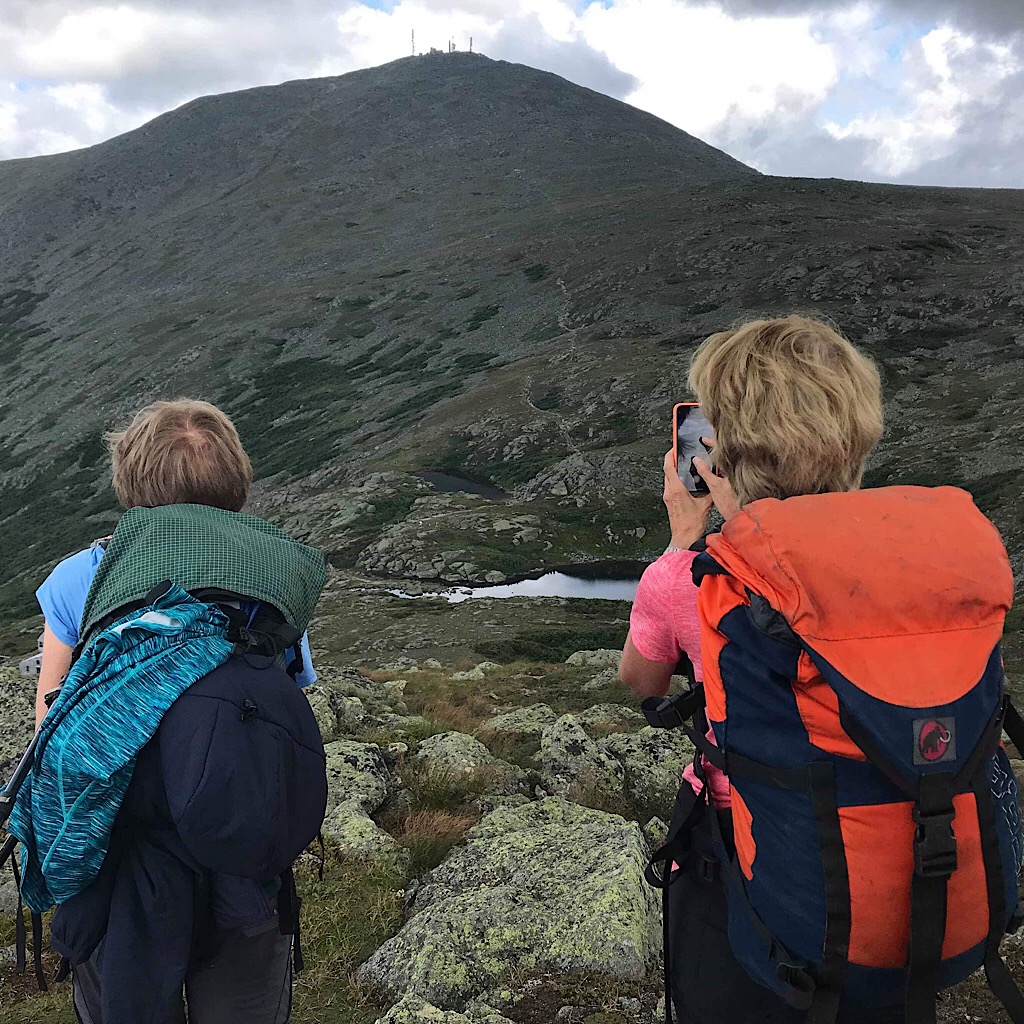 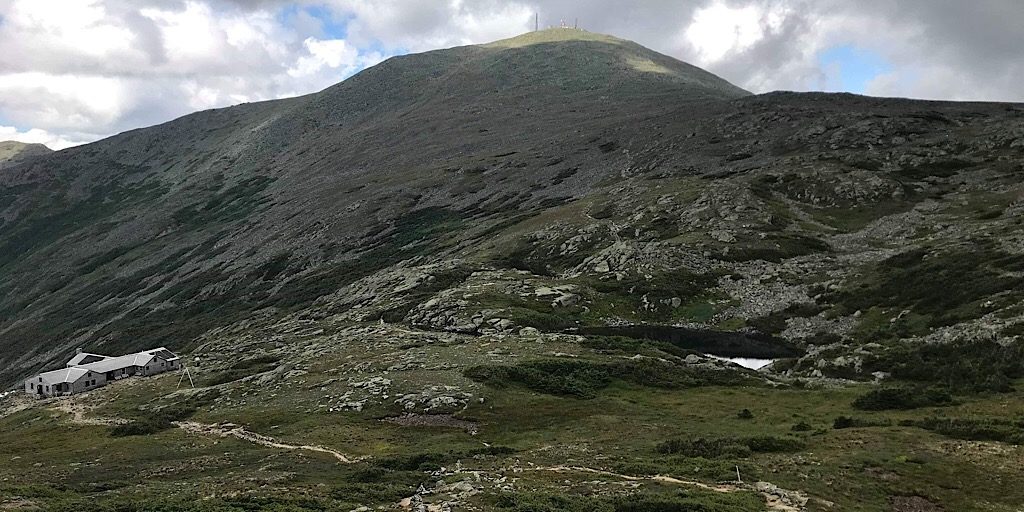 Lakes of the Clouds hut below with Mt Washington looming ahead. 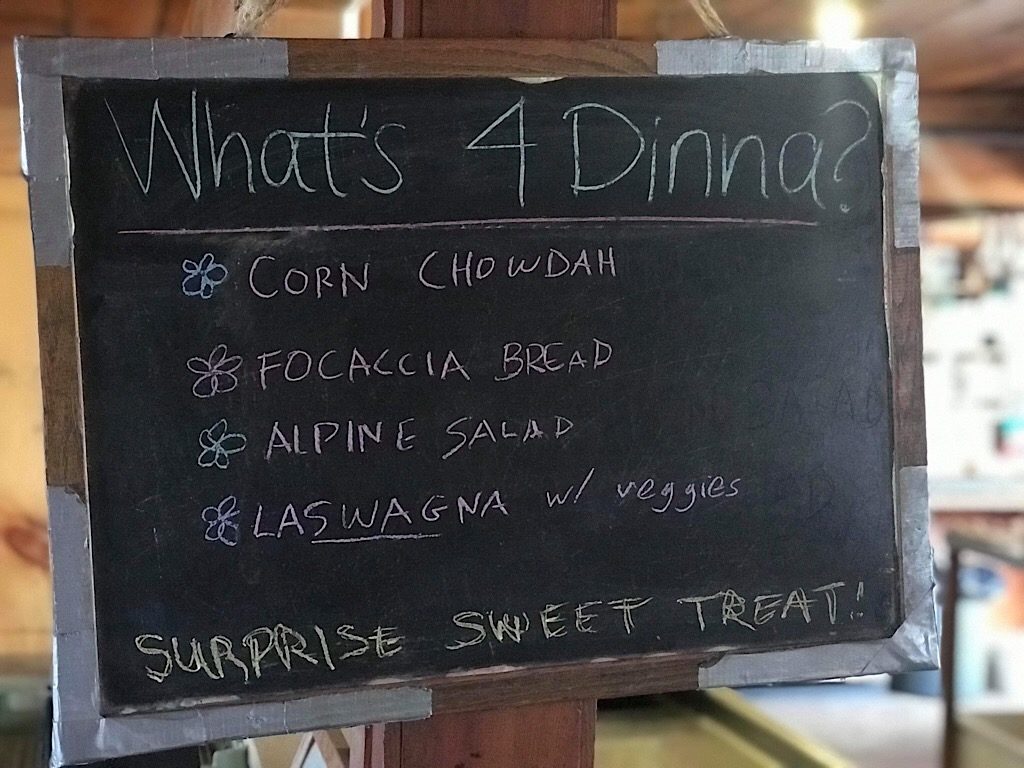