[…] when socked in, shrouded by a cloud, that slow progression is sensed less; you can’t look up and see that your goal is still a million miles away.

On day two they awoke — done easily in the incredibly noisy Lakes of the Clouds Hut — packed up their gear, then had a hearty family style breakfast. Chatting heads bobbing and eating while random arms stretch across the table snagging this morsel or that. A bit like a free-for-all? Perhaps it is. By 7:45 they were back on trail, happy to leave the cacophonous hut scene behind them. Before them stood a large cloud with Mount Washington sealed within. As per the norm, the weather was less than perfect atop this 6288′ “Rock Pile.”

It’s not easy climbing this huge mountain. The progress for some excruciating. But when socked in, shrouded by a cloud, that slow progression is sensed less; you can’t look up and see that your goal is still a million miles away. The focus ends up being on the short views, the local awesomeness of it all, and the feet. Foot after foot, step by step, one wetted rock to another. The heavy breathing. Wooden legs. You undergo a metamorphosis of sorts, unaware. Higher and higher not realizing you’re there until you’re actually there. And then it’s over.

The cloud choked off any hopes of a view from the top, but they wandered and explored the summit, like some crazy town in the middle of nowhere. The winds cranked blasting past them and buffeted the team making them unsteady. Trekking poles are awesome for this sort of thing. The clouds began to weep. It was time to go. The trio moved on racing past the Cog railroad tracks disappearing either direction into the wind driven rain and fog, unsure of just when exactly the next train was to come along and crush them. They picked up their pace.

On Gulfside Trail, spirits barely dampened, they hiked on in the rain. Again they dropped in elevation while still slowly climbing upward on an overall progress along the now northern end of the ridge. The flavor here differs from the south. Where the south is “otherworldly,” the north end is even more so. Here the low plants and grasses enjoyed along graded rocky paths give way to jagged lichen-covered talus and not much else except in patches. A rock-hooper’s paradise.

They continued on toward Mount Jefferson (5712′) sticking to Gulfside Trail which is also the Appalachian Trail (AT). They skirted Mt Clay (5533′) as they went. Clay isn’t technically a “4000-footer” due to a lack of prominence on its south end where it abuts Mt Washington so a lot of hikers do this. That said, we think it’s worth the detour. To many it’s a favorite among those mountains which ring the Great Gulf Wilderness Area. On a nicer day the team might have gone for it.

Unbeknownst to our trio, Jefferson would be the last mountain they would attempt that day. The weather did improve but the extreme rock hopping on that end of the range can test even the toughest hikers. Transiting Edmand’s Col to the east of Jefferson they decided to forego what would be would-be their final summit, Mount Adams (5774′). That, like Clay, they ended up skirting staying on the AT, after which they dropped down toward Madison Spring Hut where yet another bunk and dinner awaited them. A dinner, this time, they shared with fewer people, quieter people. This made for even richer experience.

They ate, visited with other hikers as well as with each other, and stretched their legs outside. This is a gorgeous area to while away the hours soaking it all in. The weather had improved throughout the day so it was once again nice out. The winds were mild in the col, and the rain and clouds had long vanished. This col doesn’t offer the sunset Lakes of the Clouds does, and for that they would have to climb at least part way up Mt Madison (5367′), but they opted not to. Perhaps on day three. Good night. (Keep reading the text.) 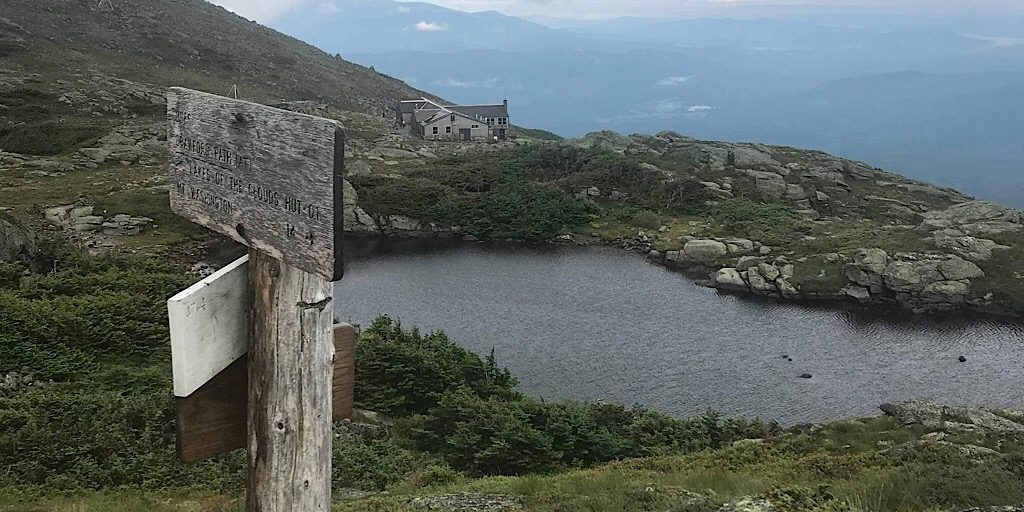 This day feels a lot different so far. What it will bring, they wonder as they leave the hut behind. 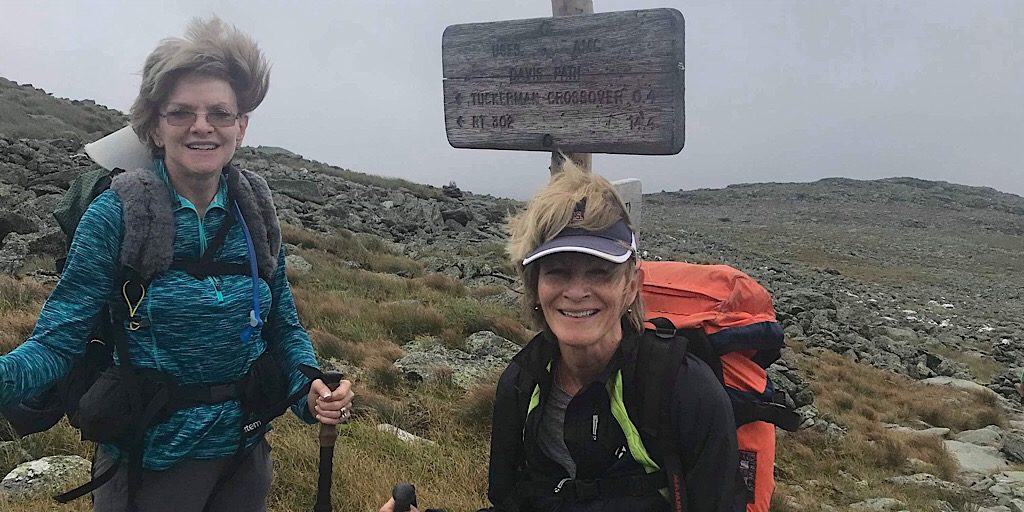 A windy day, the sky above thick with clouds. They will hike into them. 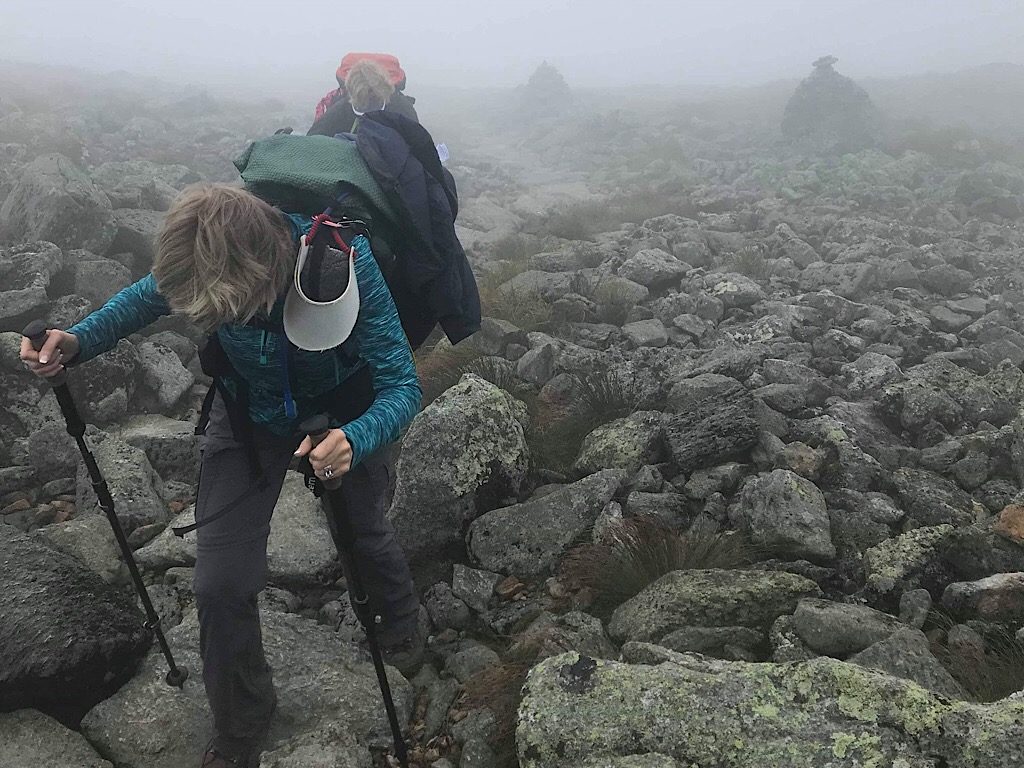 The clouds offer little resistance. Gravity, however, is another matter. It pushes back. 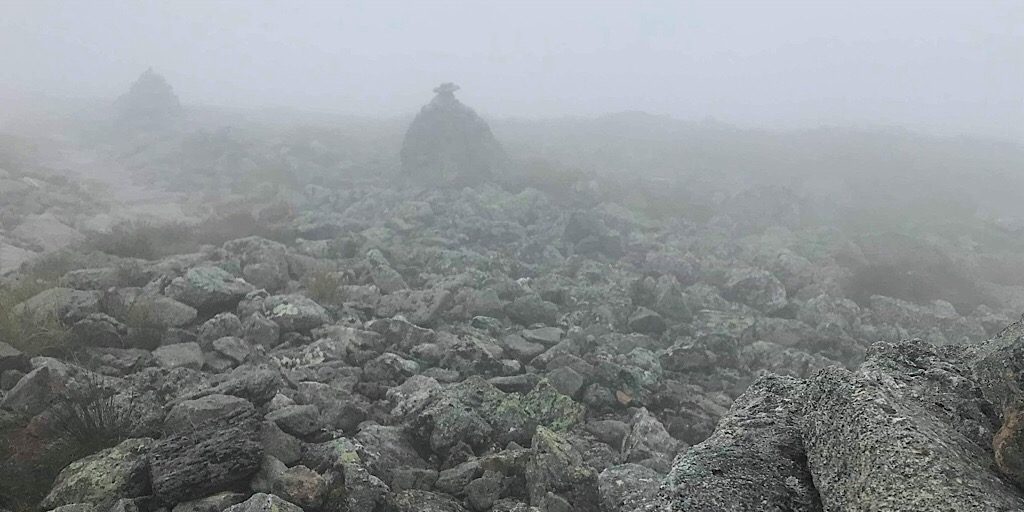 The rock cairns really help out in this all-too-common mountain weather. 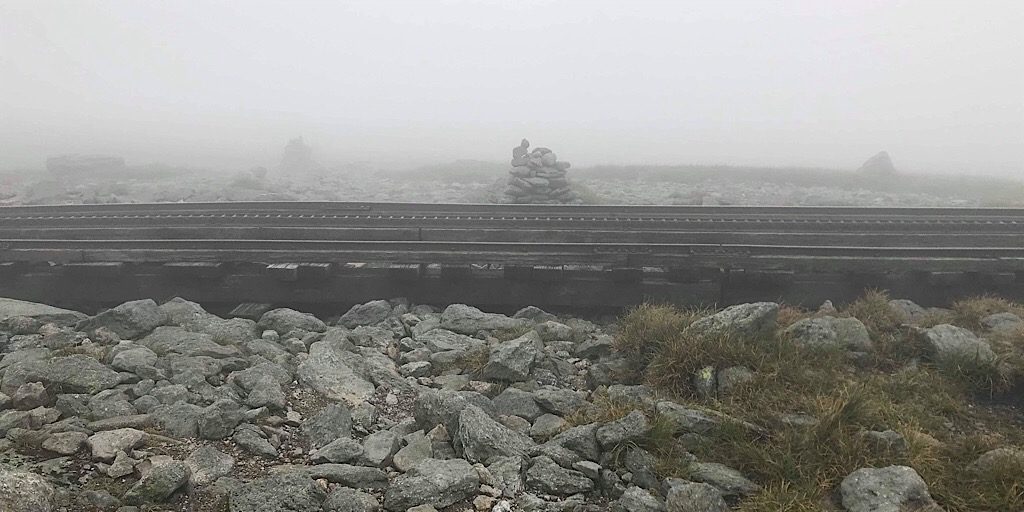 Hooo-hoooooo… they listen for the train, waiting for it to leap out of the mist. 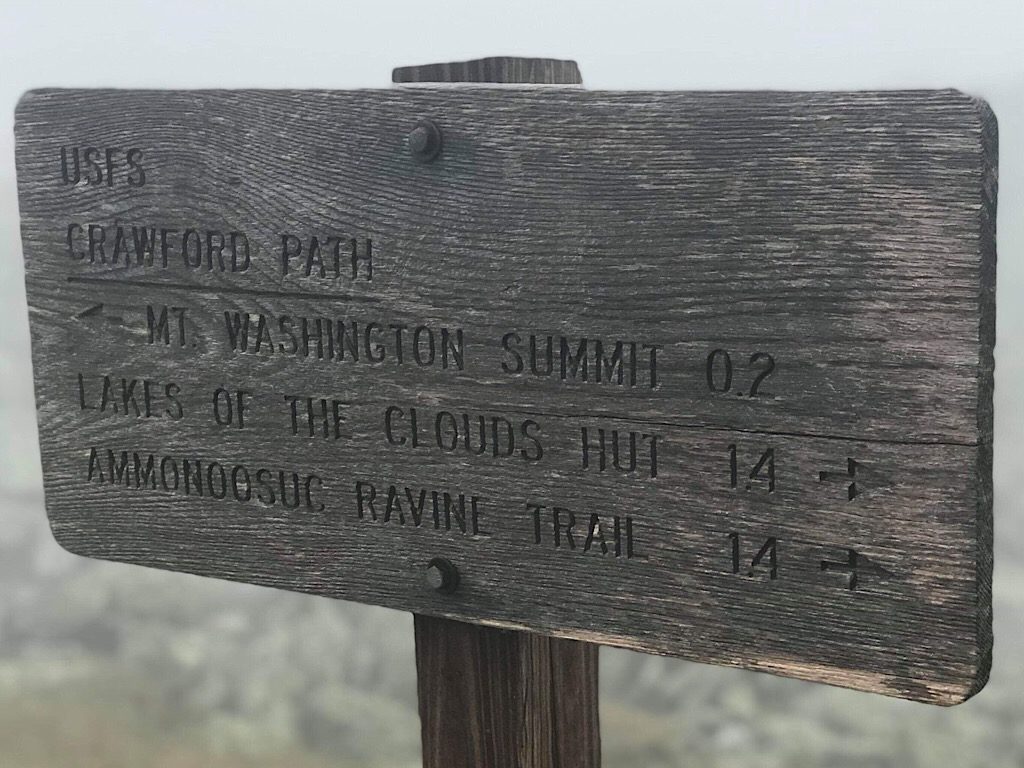 Signs appear and show the way. 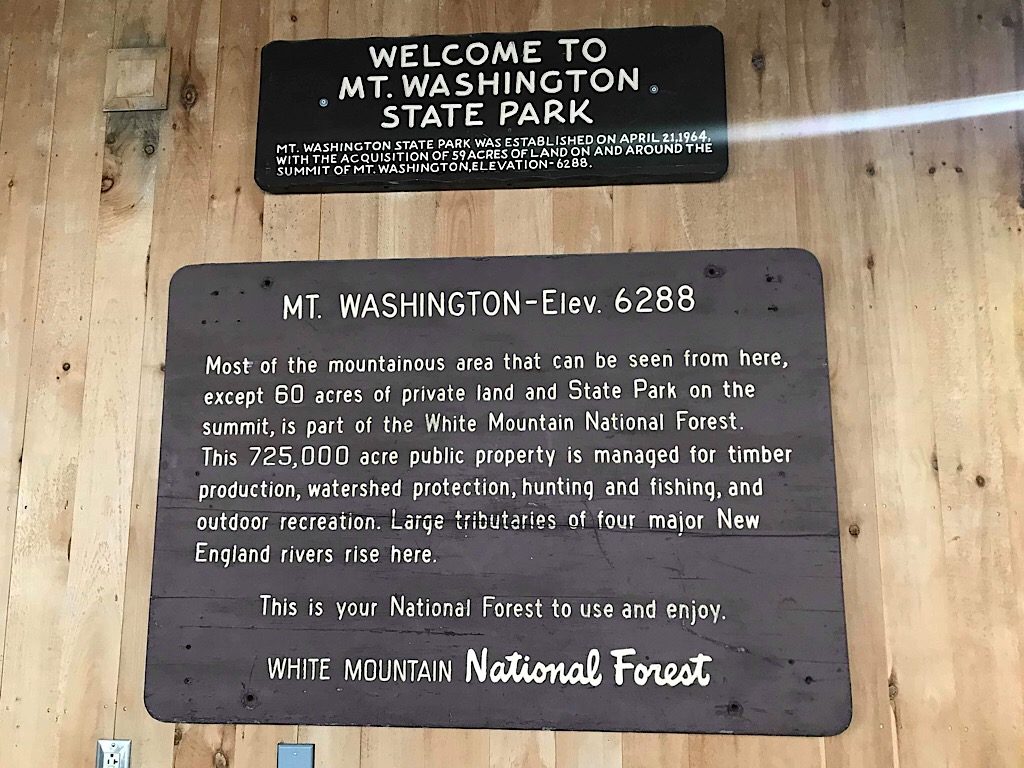 They take a break inside out of the elements. 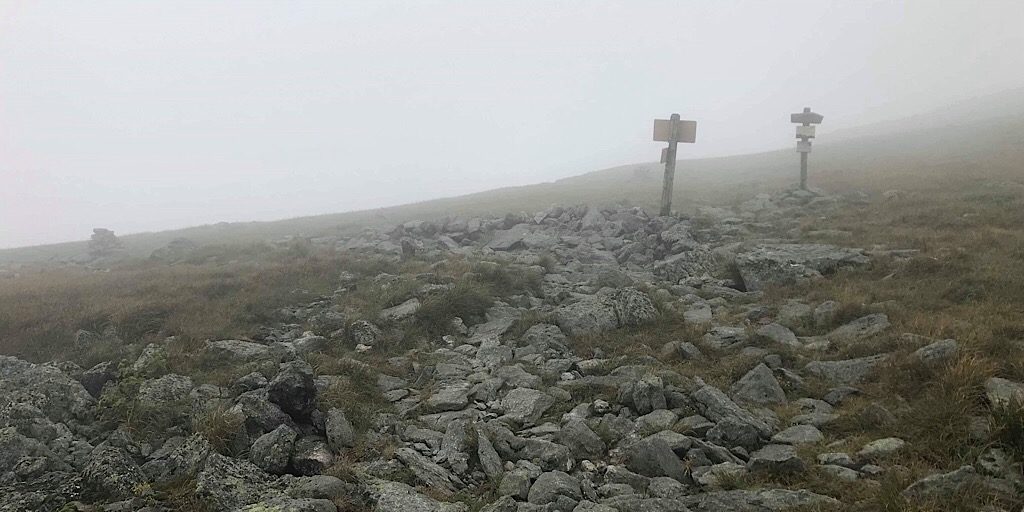 Back on trail, they leave Mt Washington behind. 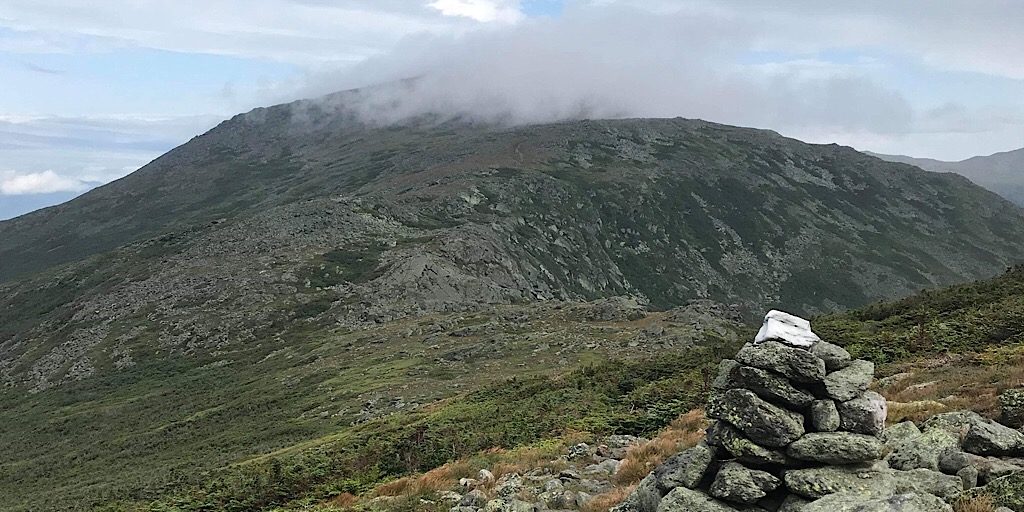 Passing Clay, Jefferson beckons to them. 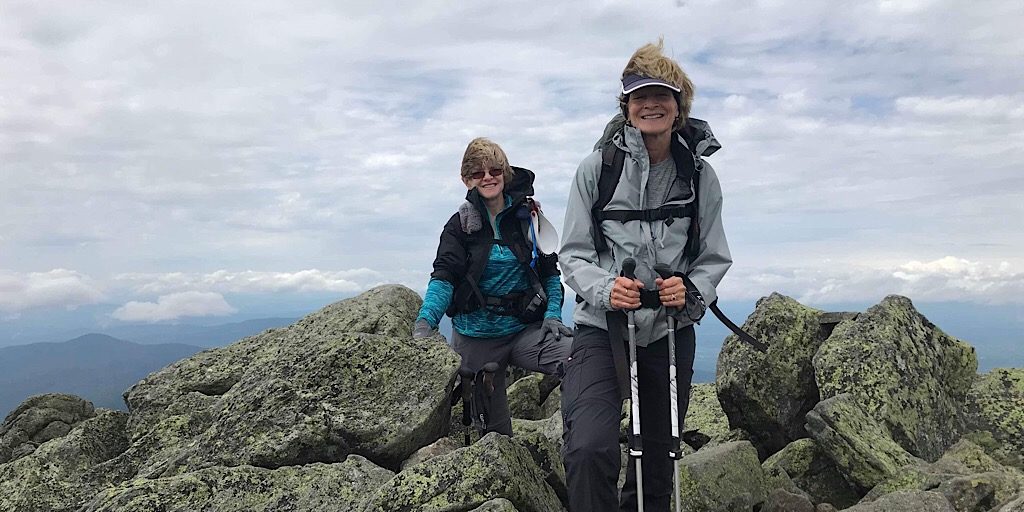 They finally summit Mt Jefferson. The skies are clearing. 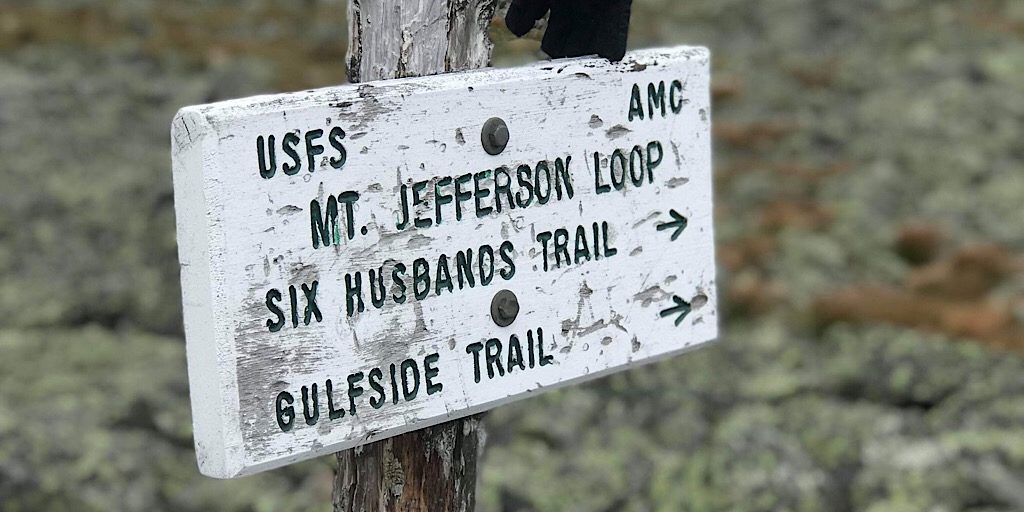 On the Jefferson summit loop. 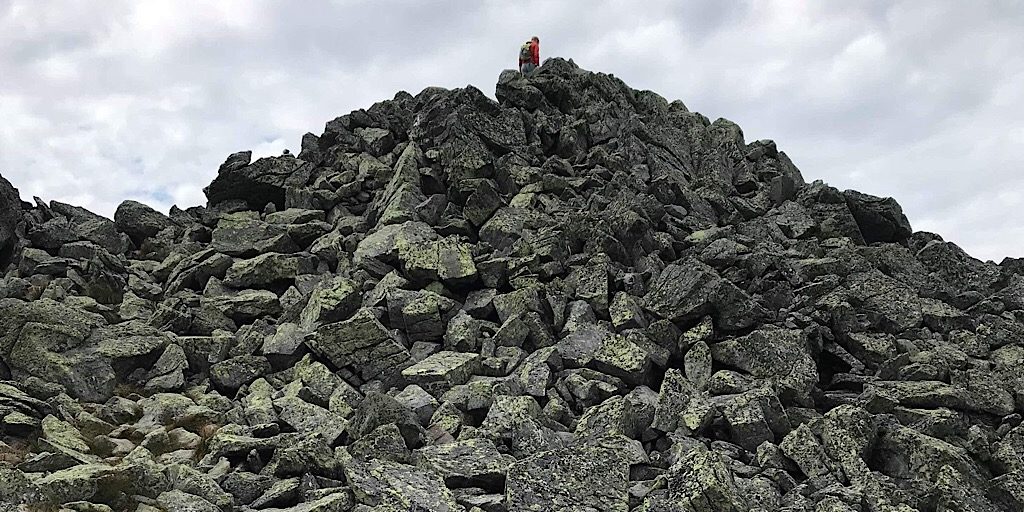 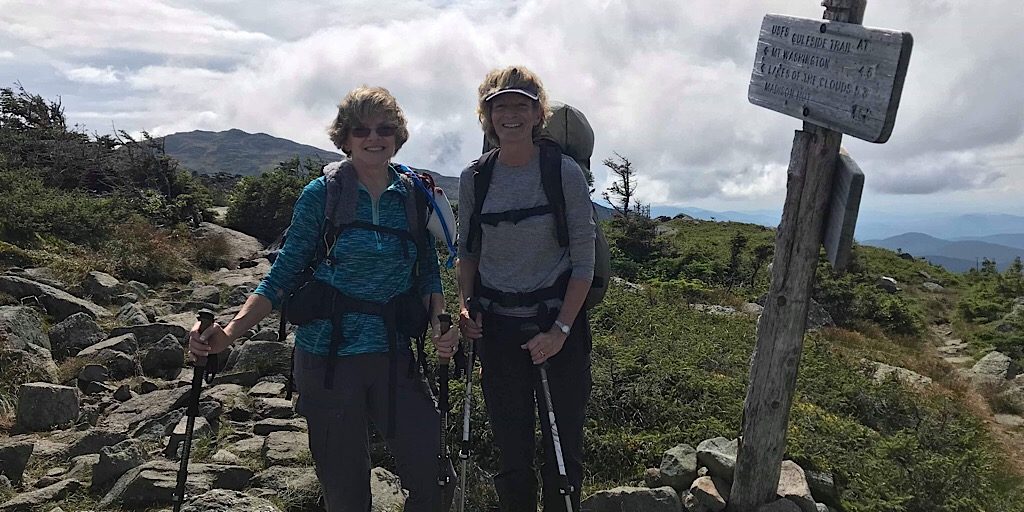 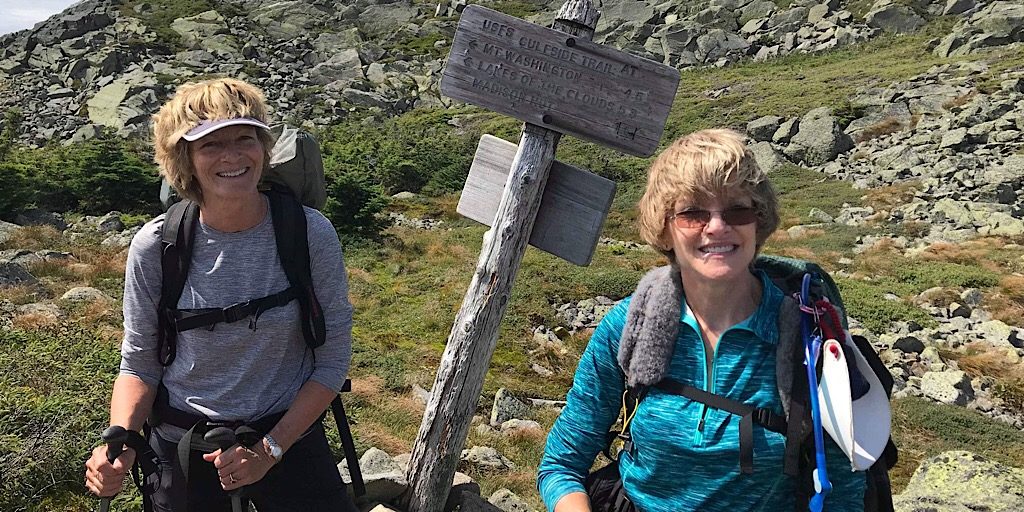 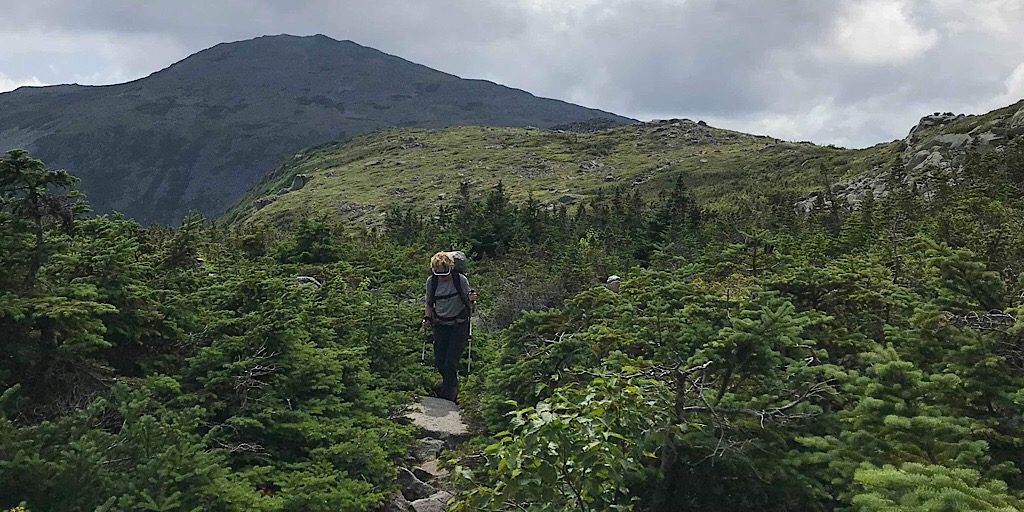 Making their way up onto the broad western shoulder of Mt Adams. 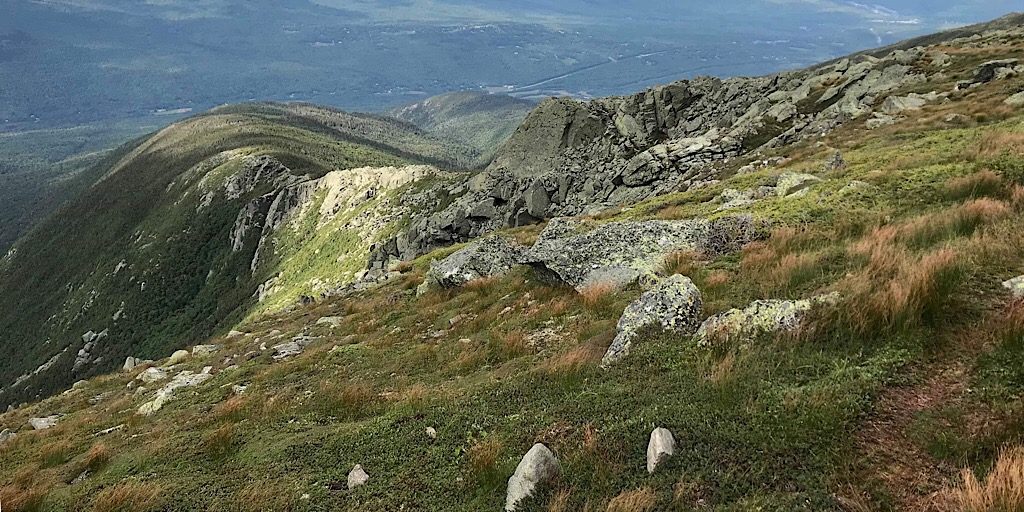 They spot Durand Ridge and the home of Airline Trail. 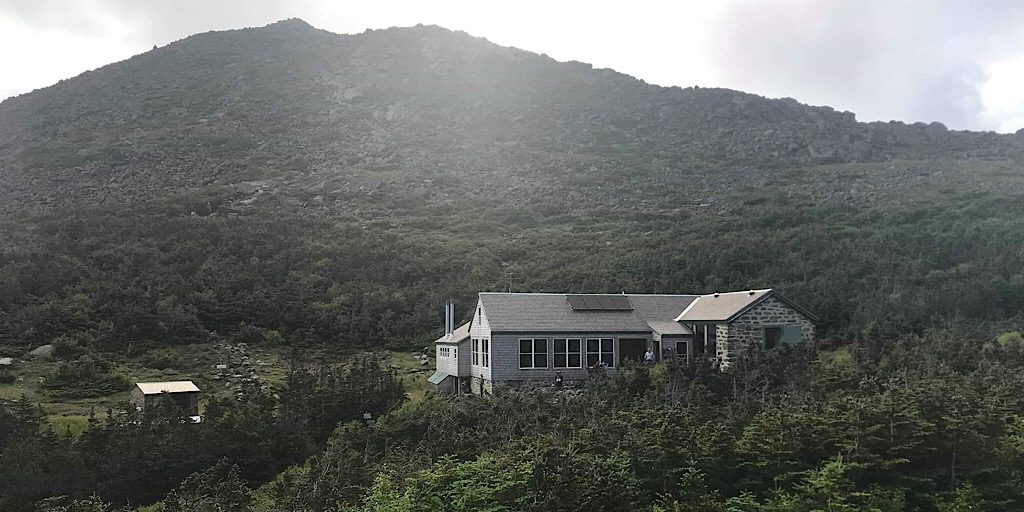