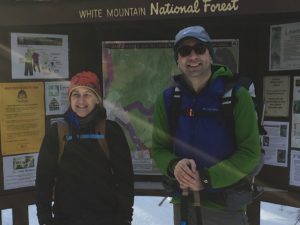 In the northeast our tallest summit is that of the 6288-foot Mt Washington, the White Mountain — which is the most prominent peak east of the Mississippi River. It’s a historic and iconic mountain, to say the least. Some Native American people used to call it “Kodaak Wadjo” while others like the Abenaki called it “Agiocochook” or “Agiochook” (there’s still a prominent point, a crag, northeast of the mountain that to this day bears that name). The Algonquins called it “Waumbik” or the White Rocks. It is also referred to as the “Rock Pile” because the upper sections of the mountain are almost entirely composed to broken rock or talus. For some folks it’s difficult to negotiate this unforgiving terrain. Mt Washington also has a reputation as being a place with the “world’s worst weather.” Being that it’s located at the convergence of three weather systems, there really is something to be said of this moniker. In fact, the highest recorded wind speed actually observed by man is 231 miles-per-hour and was recorded on the summit of this mountain back in April of 1934. This wind speed has since been broken at 254 miles-per-hour recorded by an unmanned weather buoy off the coast of Australia, but that phenomenon was unobserved.

The wicked weather on that mountain, especially in winter, has been known to keep the summit out of our grasps for safety reasons. The cold is often unsurvivably extreme and there are winds that will sweep us off our feet slamming us into the rocks. These are collectively known as no-go conditions. We experienced that a lot this past winter. Fortunately, we’ve gotten a couple of lucky breaks now that it’s spring (do bear in mind, on the mountain it is still winter-like). Yesterday, in fact, we had two separate tours that ended up combining into one since everyone hiked at pretty much the same pace and both summited. These tours were led by Redline Guides Ken Hodges and Arlette Laan, both taking a route up the west side of the mountain, as detailed in the following photos (photos by Arlette). 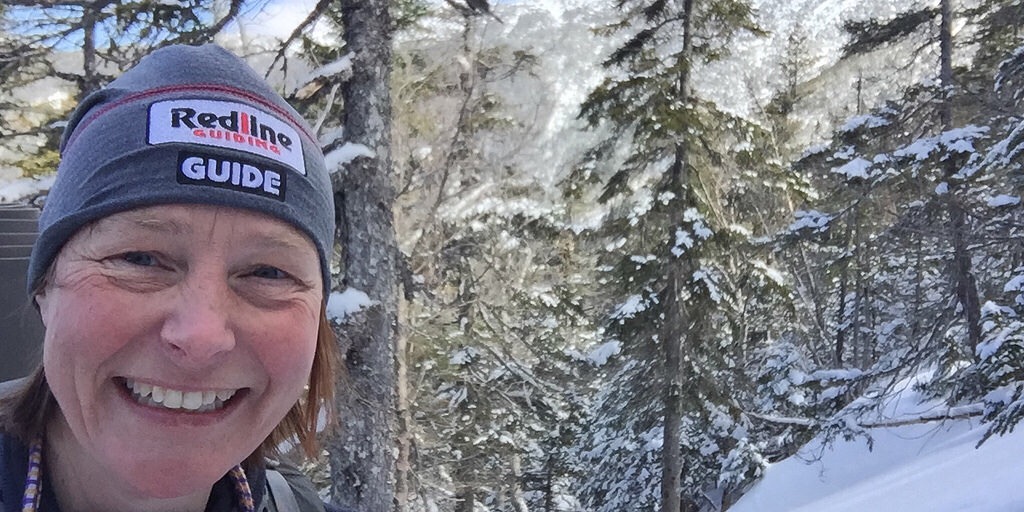 Redline Guide Arlette enjoying her office for the day. 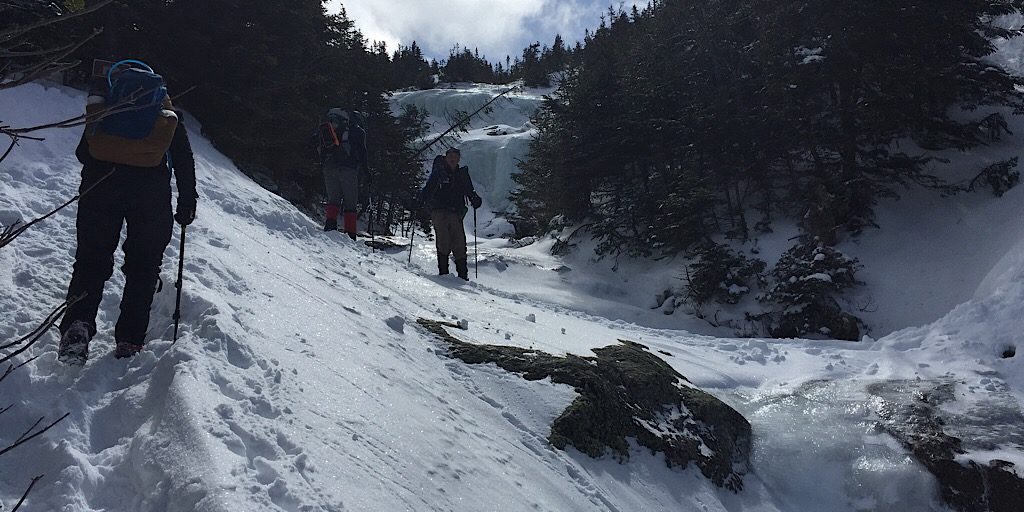 The tour progresses upward into the alpine zone. 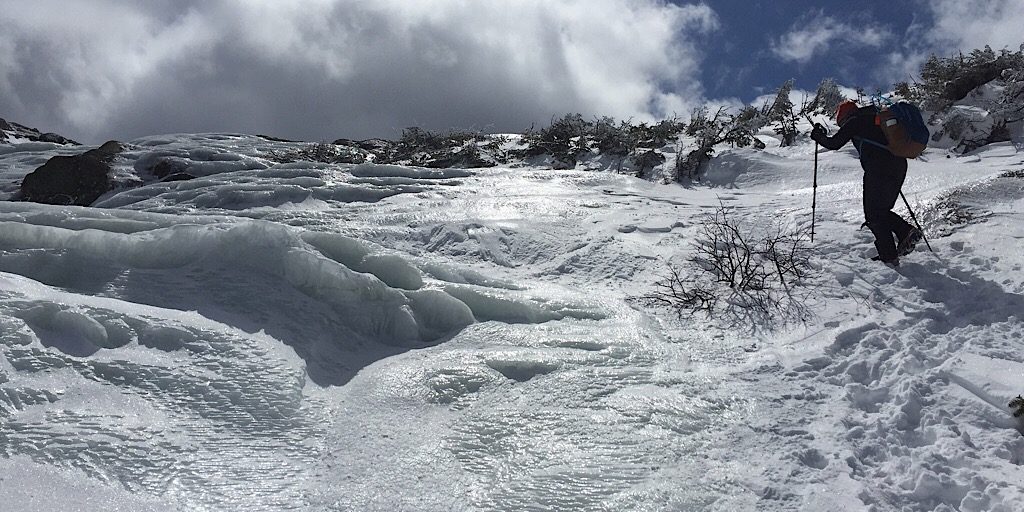 It’s a gorgeous day, though the northwest winds are making it feel a bit cold. 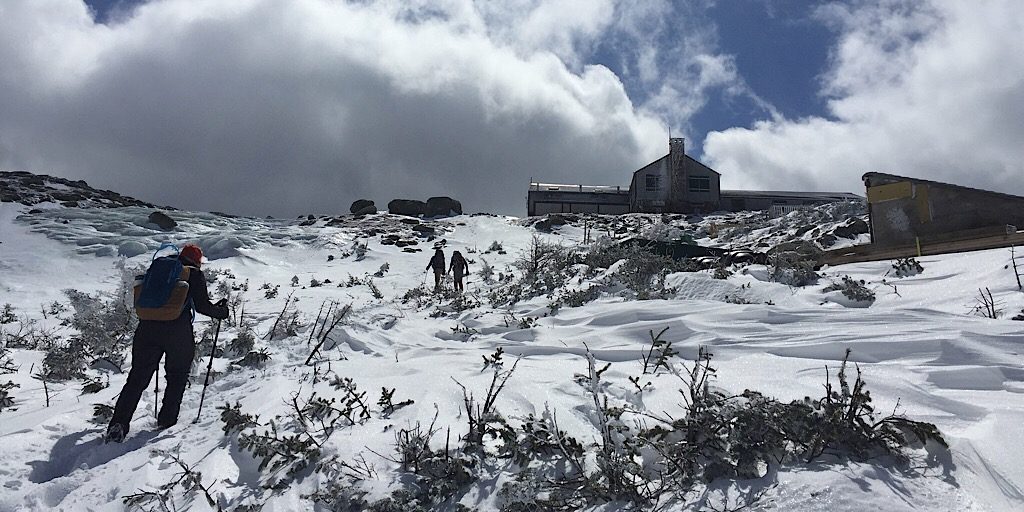 They acquire the ridge as the AMC’s Lakes of the Clouds hut looms ahead. 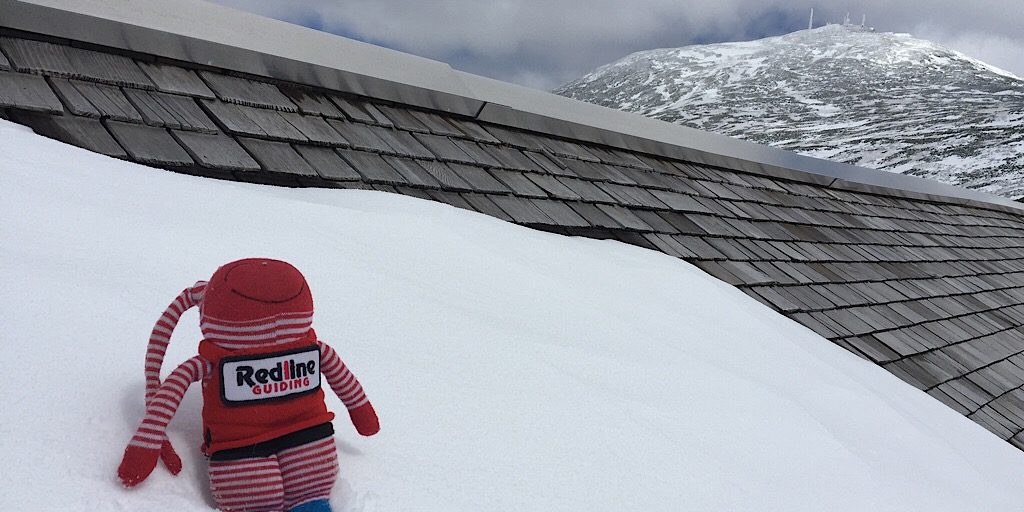 One of Arlette’s creations, “Red,” rests of the building’s roof. Agiocochook in the background. 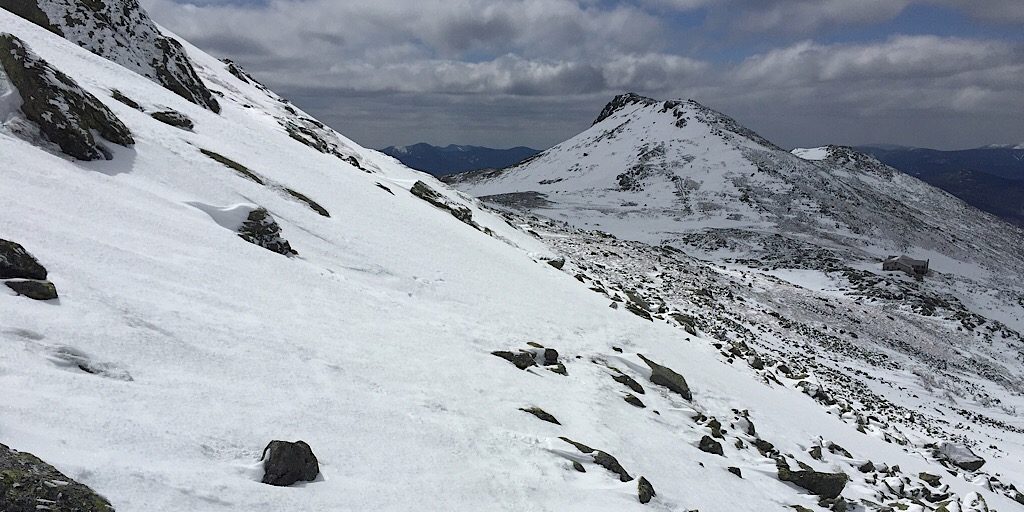 Putting Lakes of the Clouds and Mt Monroe behind them. 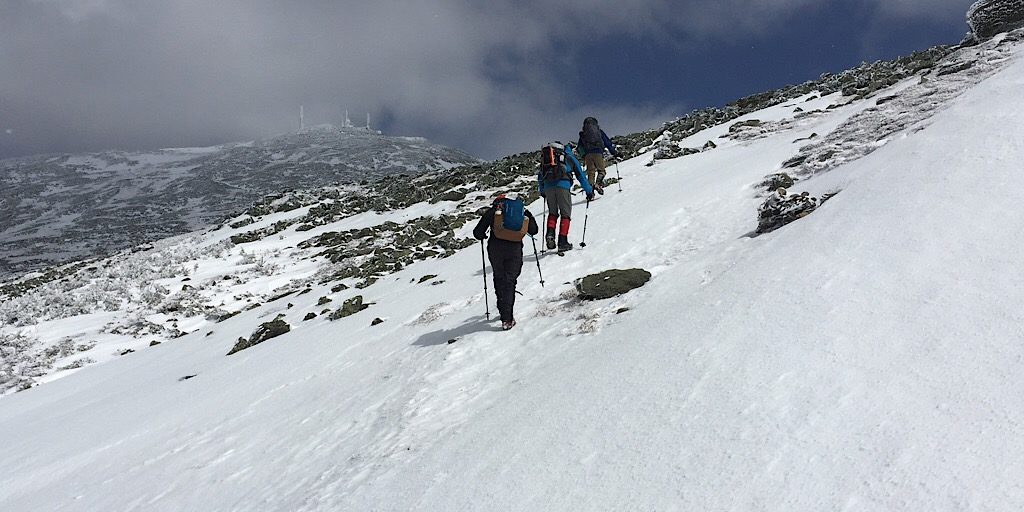 Crossing the small west side snowfield. 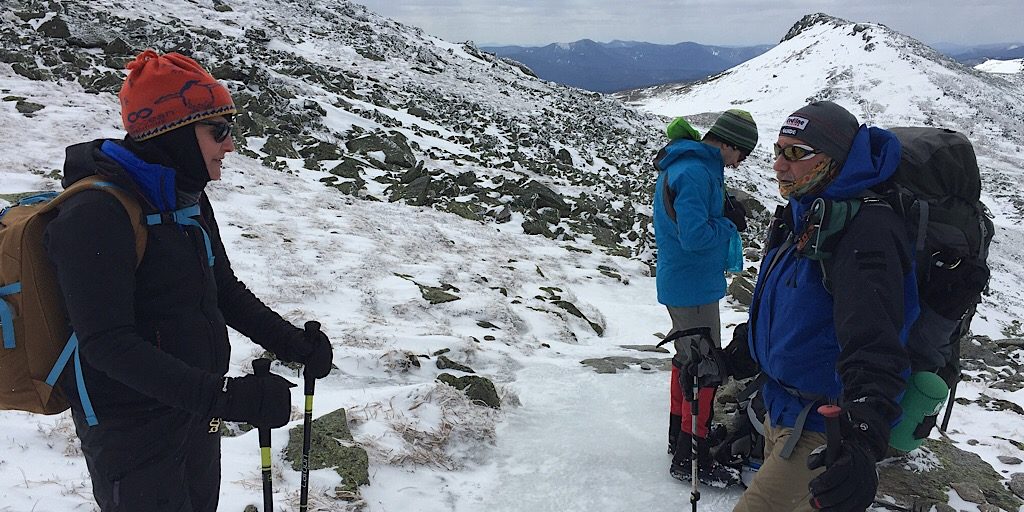 Brief respite at a trail junction. 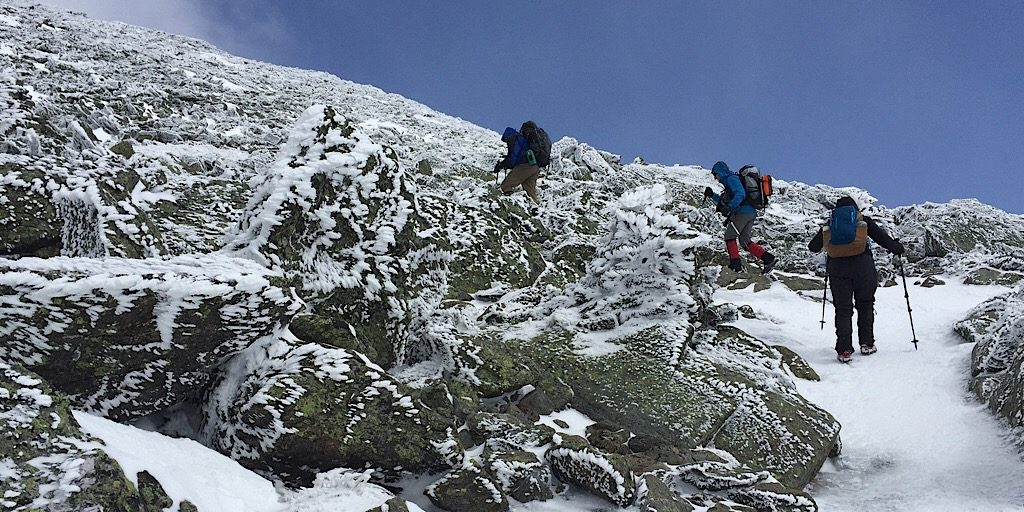 Making their way up the “cone.” 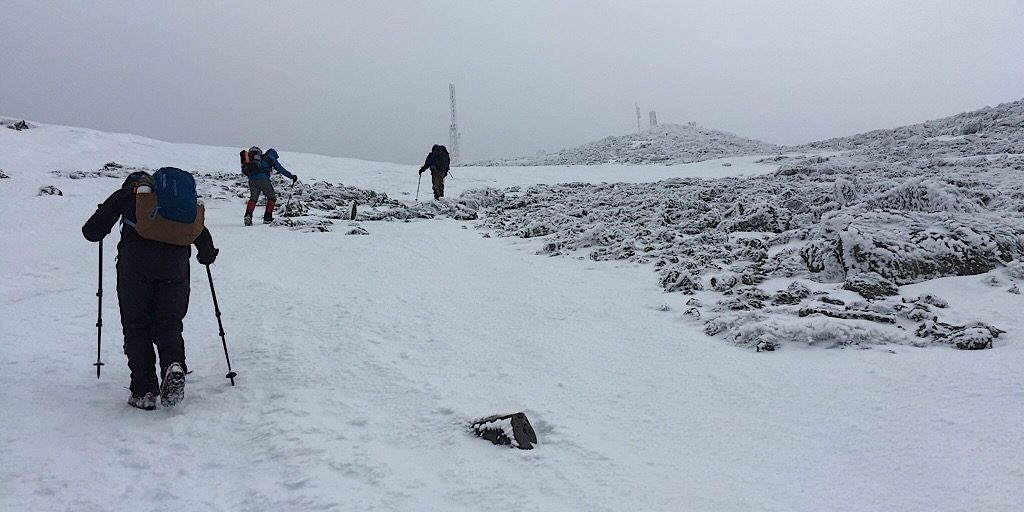 Signs of the summit appear. They are still a ways off. 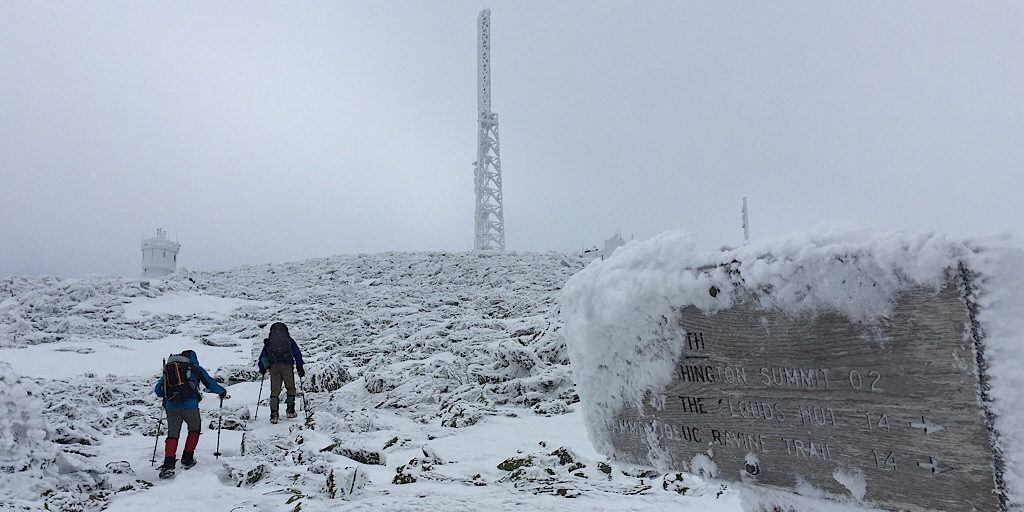 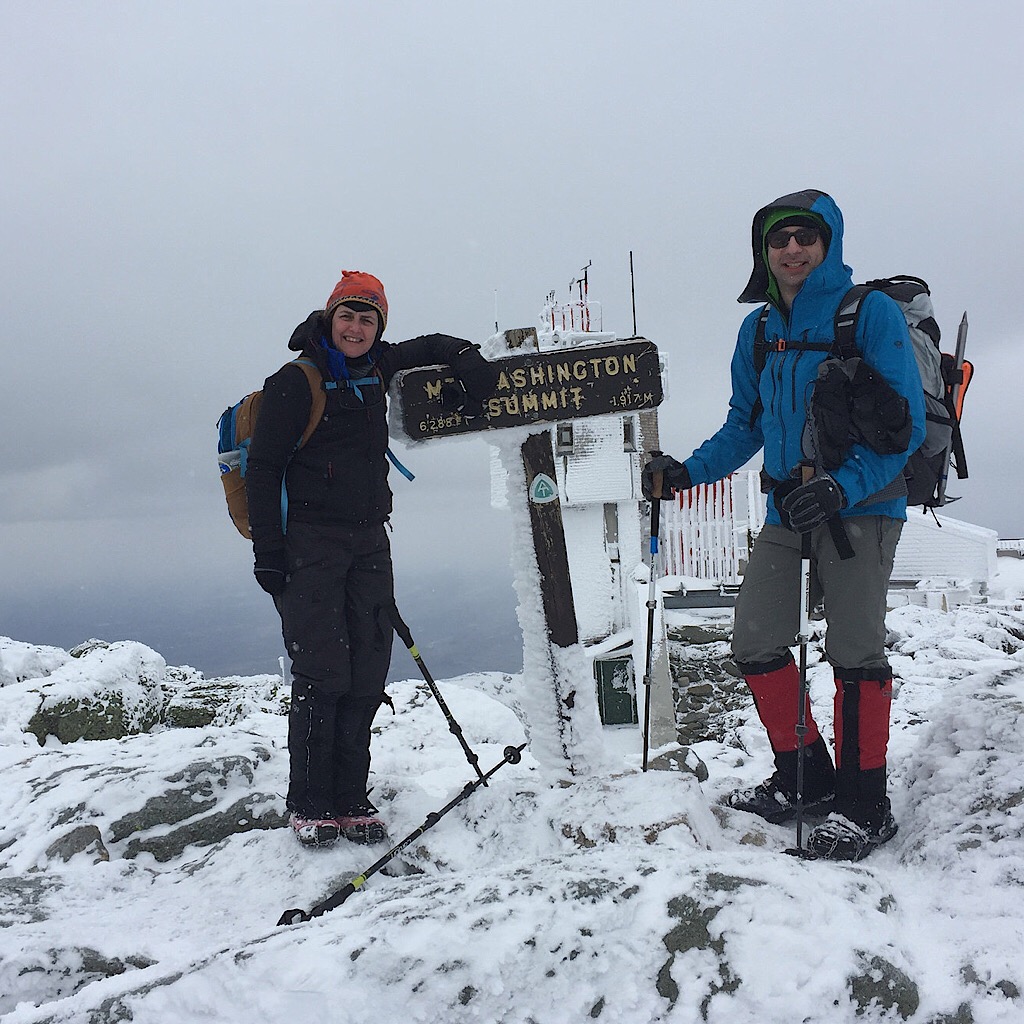 Congratulations on the summit, team. Special nod to Charbel as he was feeling quite ill and had to dig deep to push through.