Lafayette in the Clouds 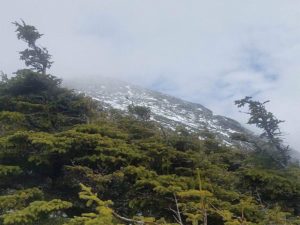 One would think that the best days would be the ones with clear skies, abundant sunshine, and sweeping, jaw-dropping views. But as one experienced in the mountains soon realizes, everyday gives us something. Today’s guest, Roberta — led by Redline Guide Ken Hodges — can attest to this, and she’s an extremely experienced hiker. Today brought the duo temperatures in the forties and mostly pea soup fog as they ascended the 5260-foot Mt Lafayette. That combination may elicit frowns from some, but to Ken and his experienced guest, it was an extremely enjoyable day in the mountains. They couldn’t see far, but they didn’t need to see very far to find that special something.

Roberta didn’t need us to do this with her, per se. She has, after all, hiked the New England 67 mostly solo. But on this trip we served as peace of mind. Roberta had hiked Lafayette before, but never in such conditions so Ken being there was reassuring to her even though she relished the conditions. He was helpful with navigating between the cairns. Moreover, she commented that she was thankful that she was able to leave a few emergency items behind because she knew Ken had them covered. The visibility was abysmal, but the outlook on the day was bright. The team summited successfully, triumphed, then returned the way they came — being treated to a spectacular albeit brief pocket view of Cannon and the Kinsmans along the way. 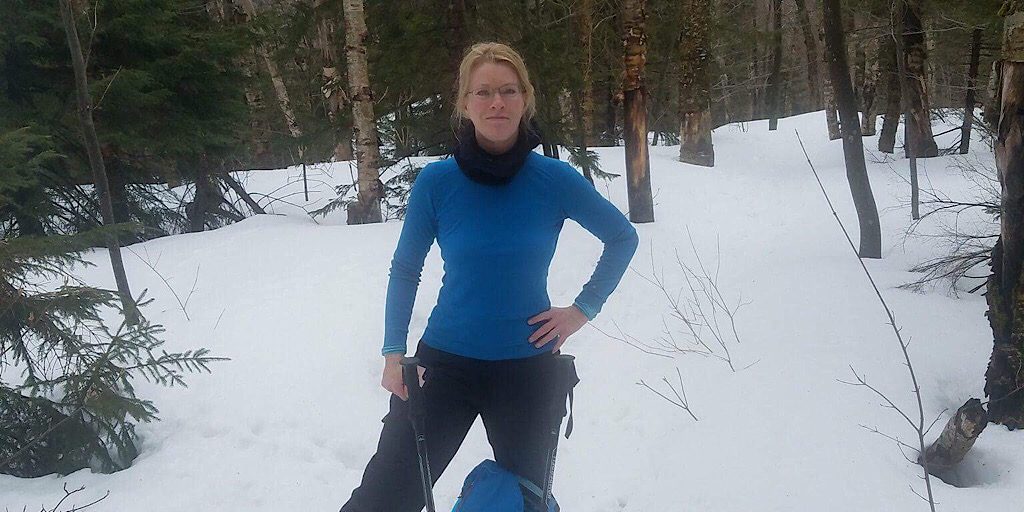 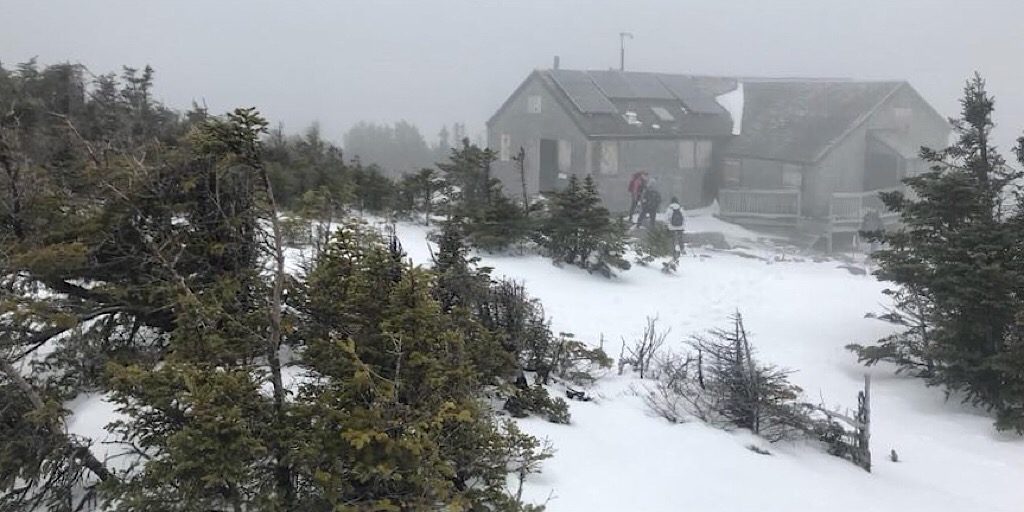 By the time they reach Greenleaf Hut they find themselves walking inside of clouds. Photo by Roberta. 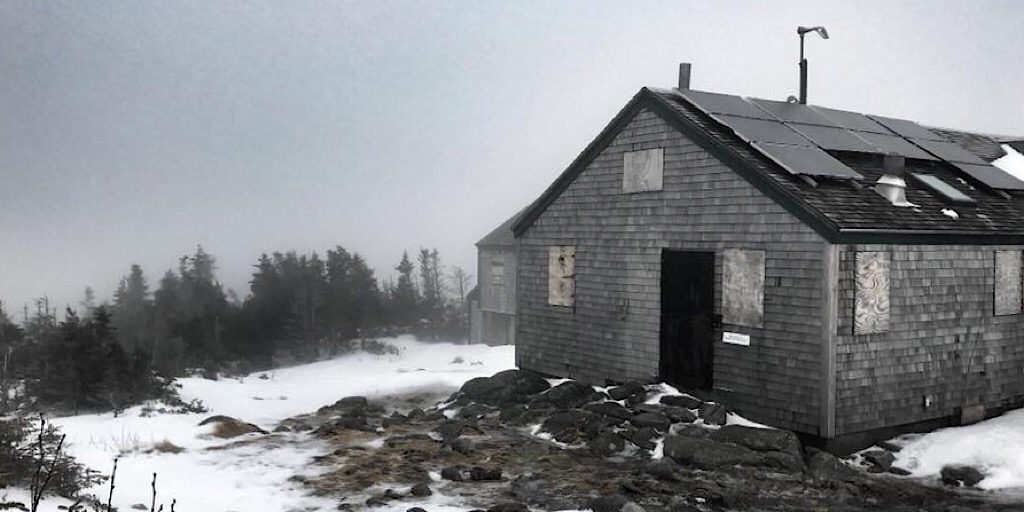 A rundown shanty on the edge of town or a pricey alpine hotel? Photo by Roberta. 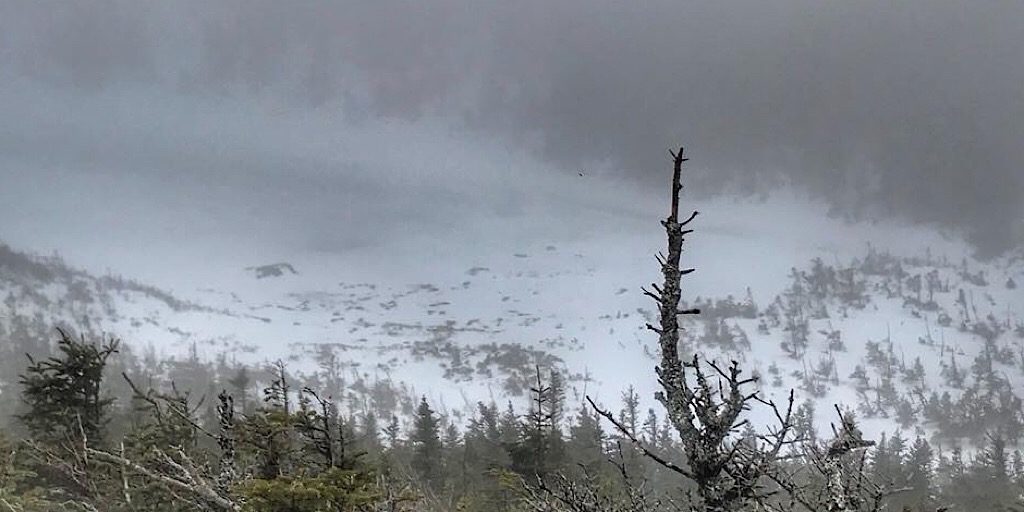 What appears inviting on some days can be downright ominous on others. Photo by Roberta. 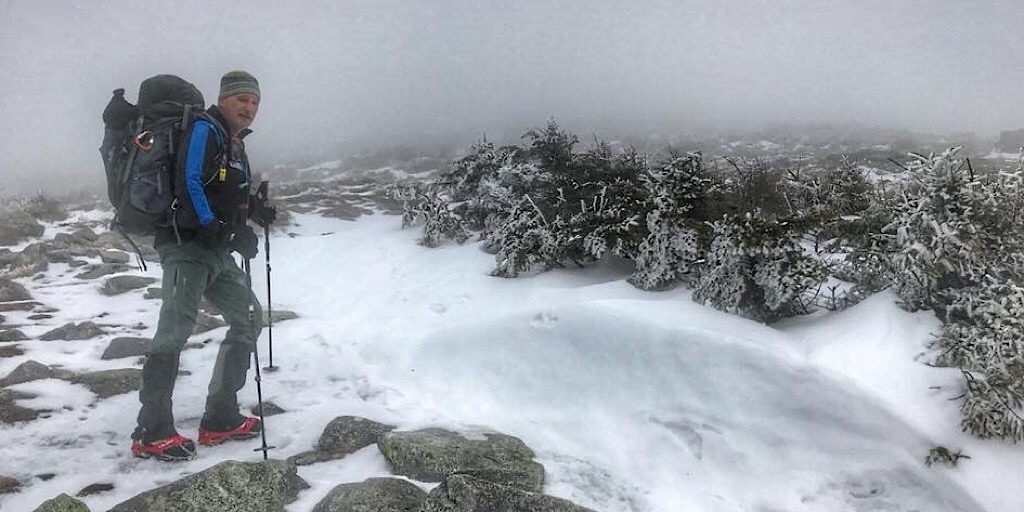 Guide Ken leads the way, navigating toward the summit of this fine mountain. Photo by Roberta. 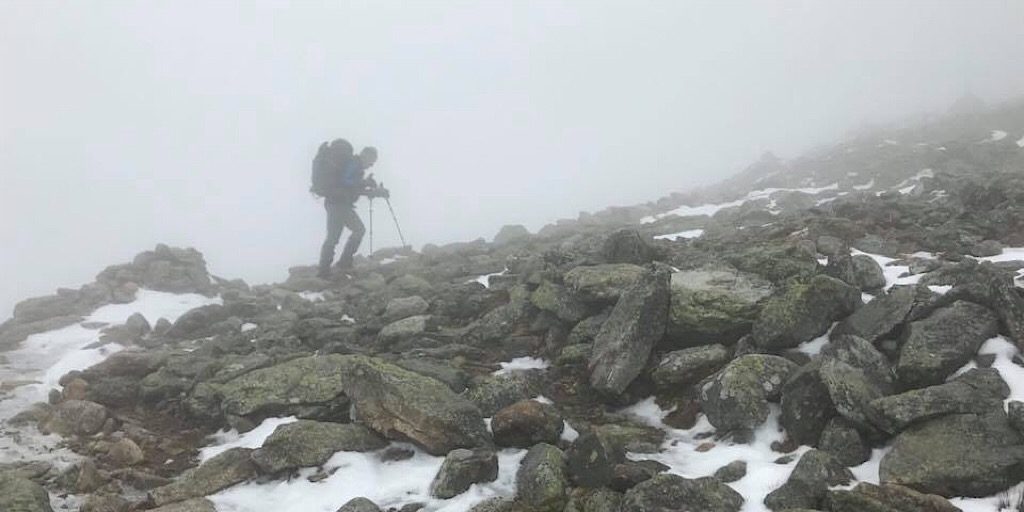 Like pea soup some will say, but we prefer to equate it to cream of cauliflower. Mm-mm, good. Photo by Roberta. 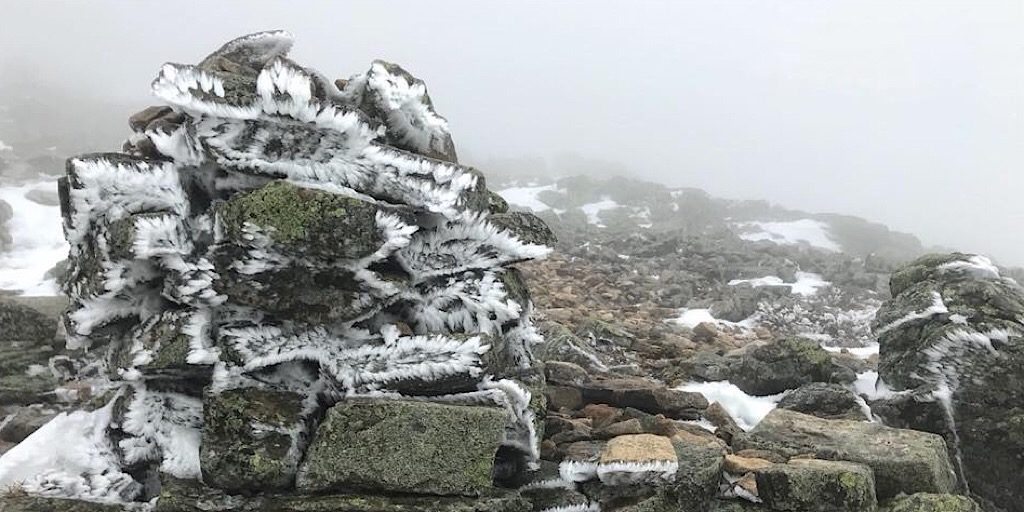 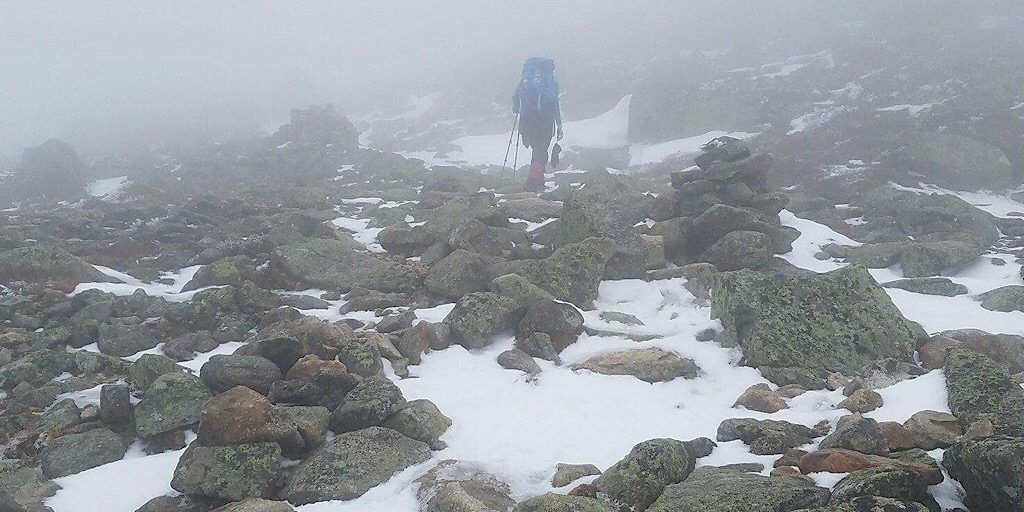 Ken drops back for a photo of Roberta negotiating the mist. 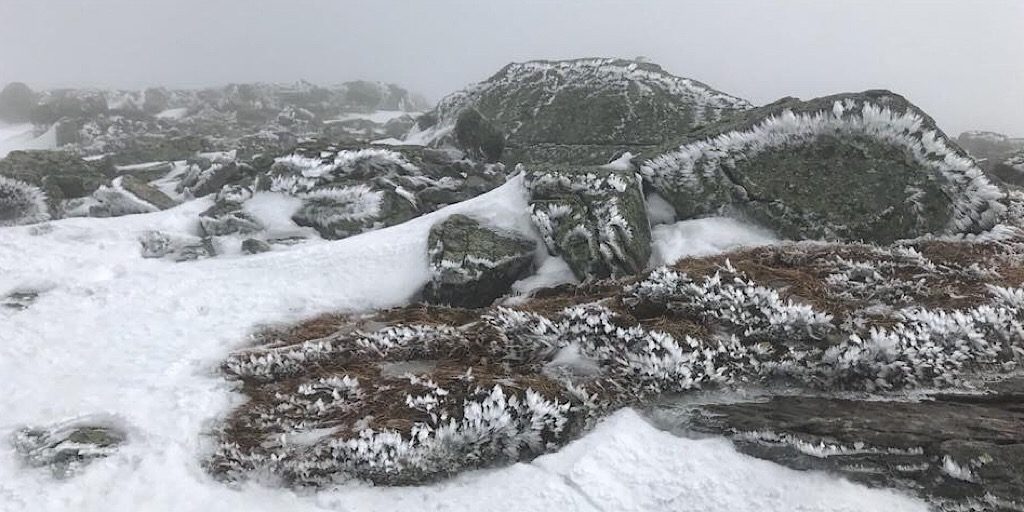 Rime ice forms on everything giving the world an alien appearance. Photo by Roberta. 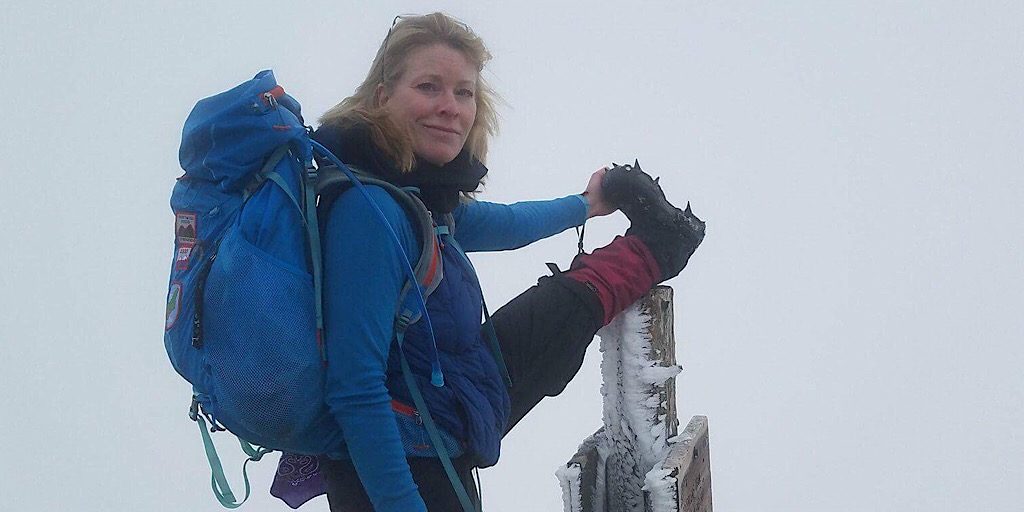 Roberta has practiced yoga for 31 years, teaching it for 14. Those who know her know this familiar summit pose! 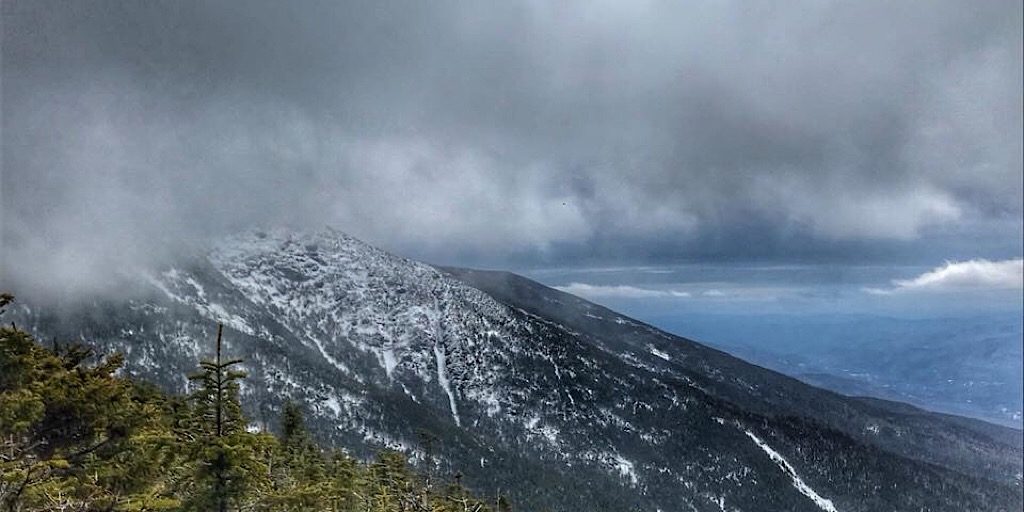 Often times, later in the day, the clouds will vaporize offering pocket views. 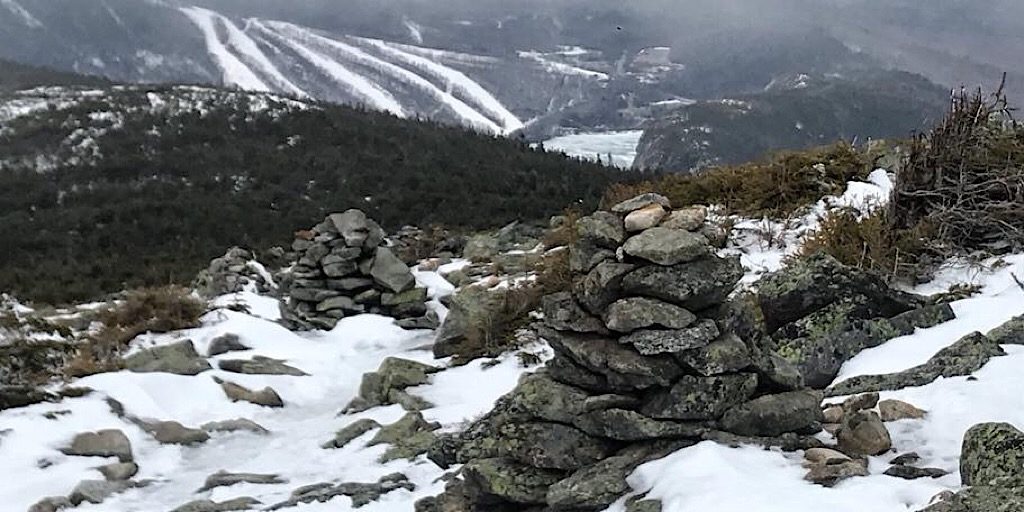 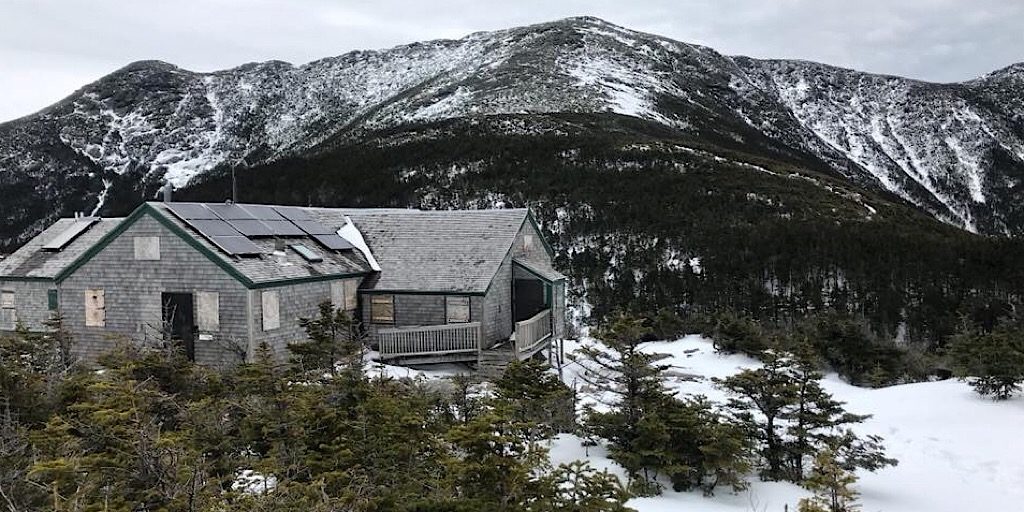 Well done Roberta! Congratulations to both for the summit. Great lead, Ken!