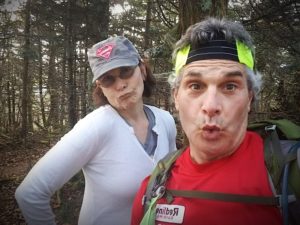 Maximizing fun is a responsibility we take seriously.

One of our many favorite guests, Monica, has returned to us again (she must have enjoyed her time with us on those prior trips up Jefferson and Carrigain). This time she wanted a companion for a hike up the Tripyramids. To refresh your memory, Monica is an experienced peakbagger working on hiking the one hundred and eleven highest mountains in New England — the NE111 (the 115 actually, to be correct, and Monica stands at 82 now). This includes the normal 67 found in Maine, New Hampshire, and Vermont, plus those found in New York State, where Monica is from. On this trip she got two more: specifically Middle and North Tripyramid, measuring in at 4140- and 4180-feet, respectively. These peaks were also #29 and #30 on her NH 4000-footers list. Monica also summited the South summit which rises to 4090-feet, but it doesn’t qualify as a 4000-footer for reasons explained here.

Since the two have gotten along so well, we put Redline Guide Howard Aronson on the job again. He absolutely loves doing this! It’s good working with Howard. We appreciate his years of hiking experience. Together we decided on a south to north route using the Mt Tripyramid Trail, but of course skipping the northern leg of the trail in favor or the much safer Scaur Ridge Trail as a detour for the descent. For those who don’t know, the regular route would take her up the “South Slide” (which is totally doable up or down, even though it is on the Terrifying 25 list) but it would descend the infamous “North Slide” (which is deservingly on that same list) and that one is bad enough going up. Forget descending that way! It’s dangerous. The bottom third is regularly slick and dangerous — even without the recent rains greasing things up. Hikers tend to use small trees to secure their upward progress. This is less than ideal. A lot less. Our prescribed route is both fun and exciting, but wisely safer. 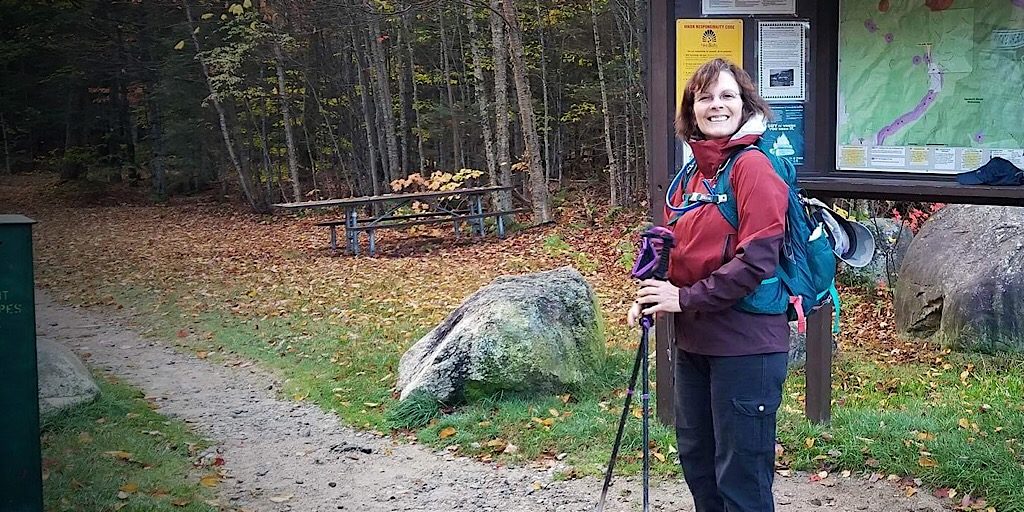 They start out at the Livermore Trail. The beginning is very flat. 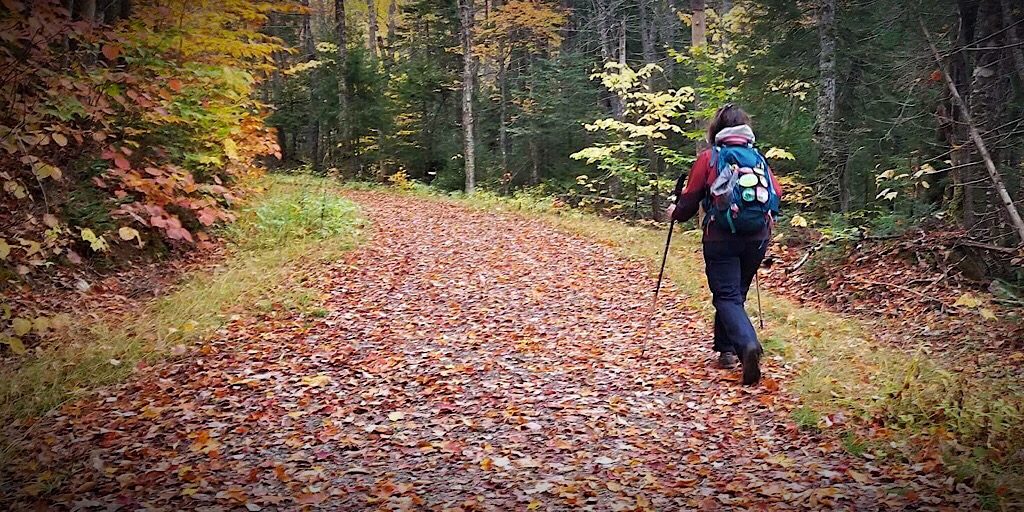 Flat but not unlovely. The carpet of color is stunning. 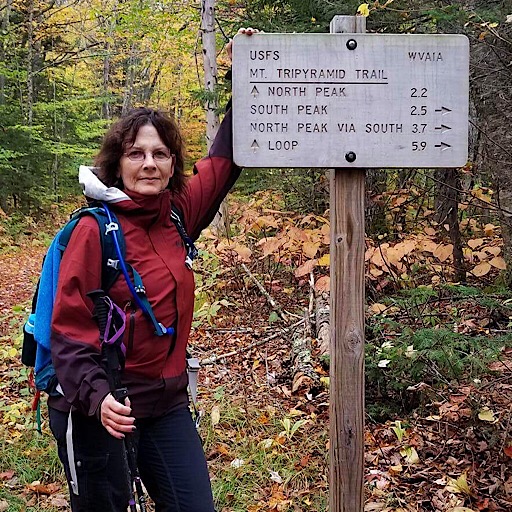 Onto the Mt Tripyramid Trail and the South Slide. 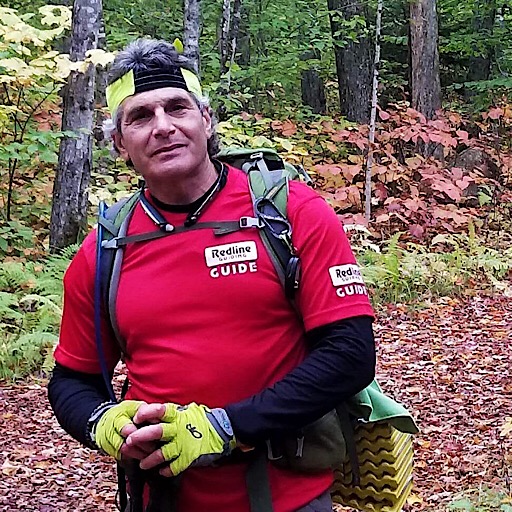 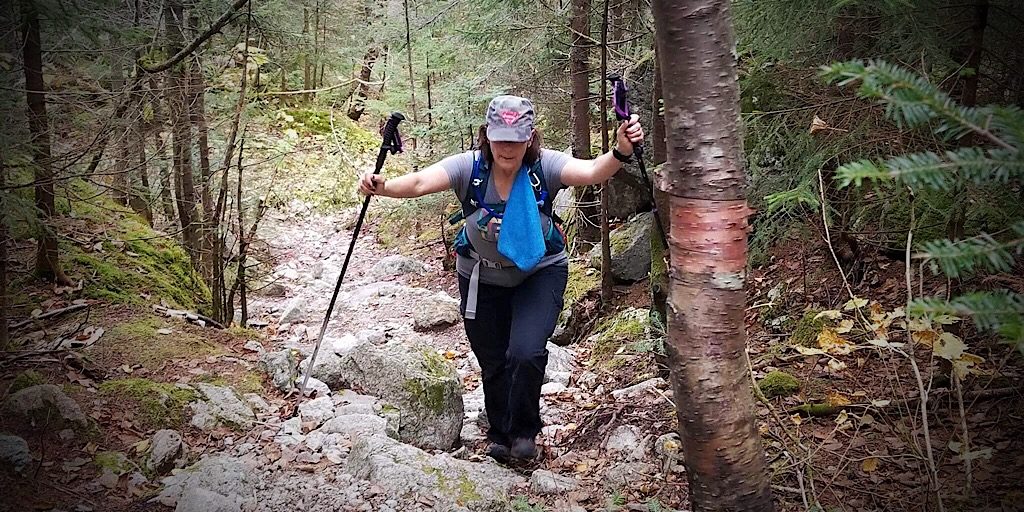 From this point on the trails become rougher and more trail-like… at least to New England standards. 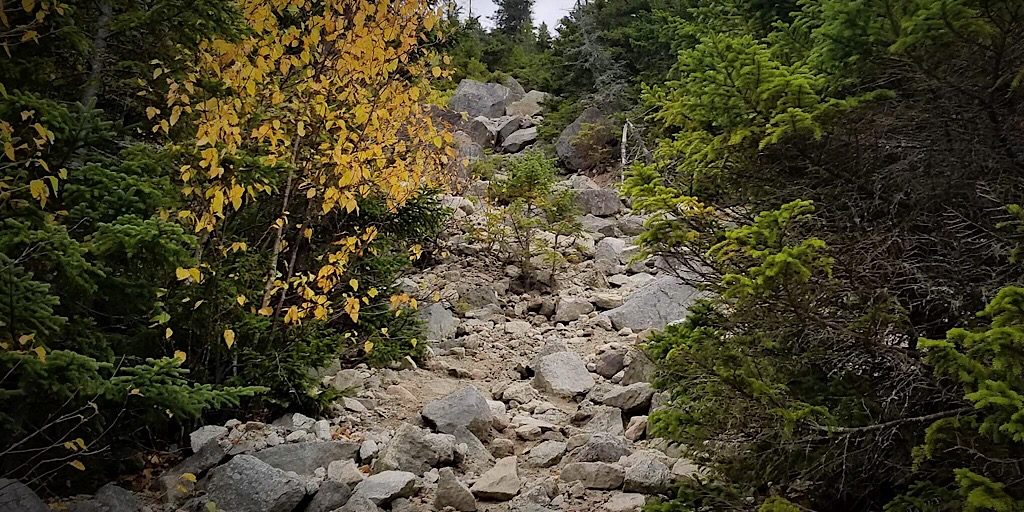 This point marks the beginning of their climb up the South Slide. Fun! 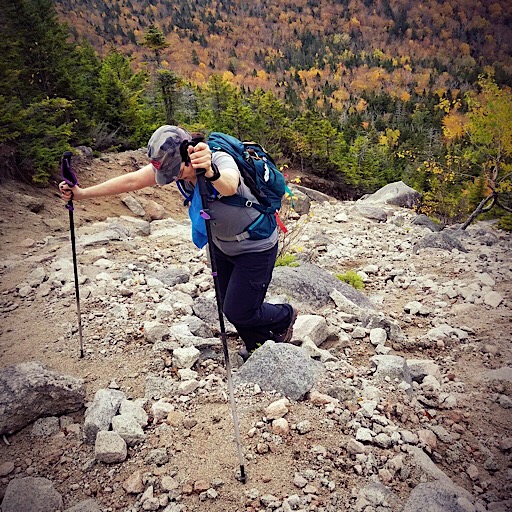 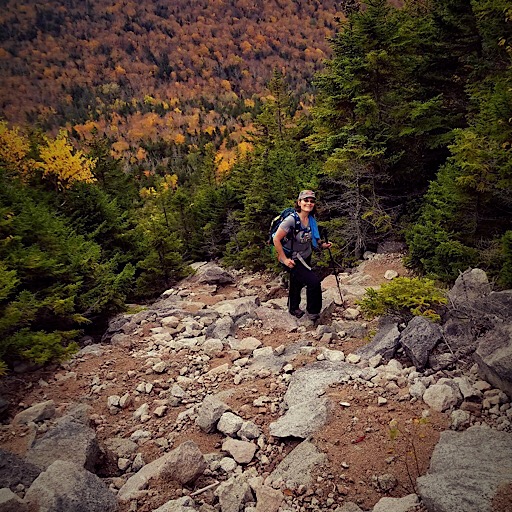 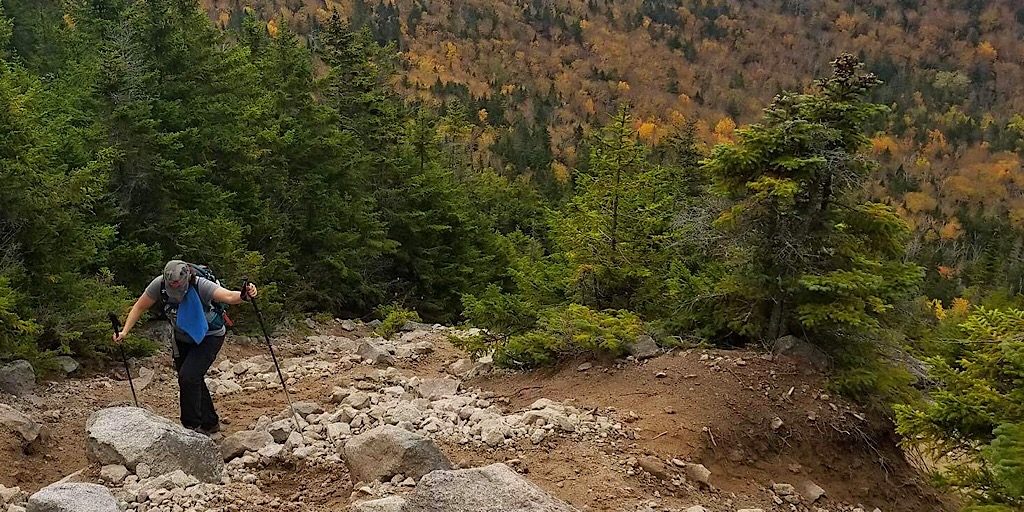 It’s not incredibly long, or steep, but it does require some effort. 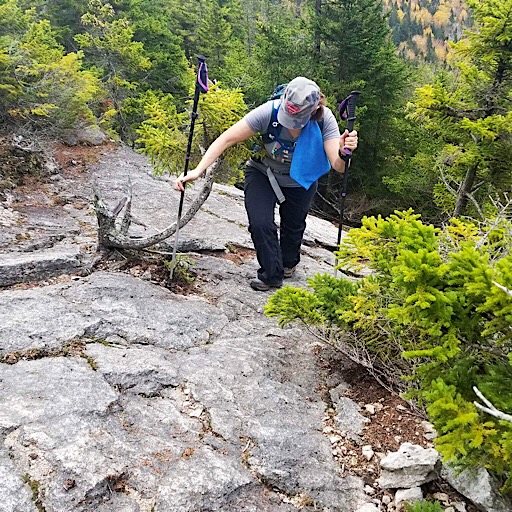 The upper reaches reveal some slab. 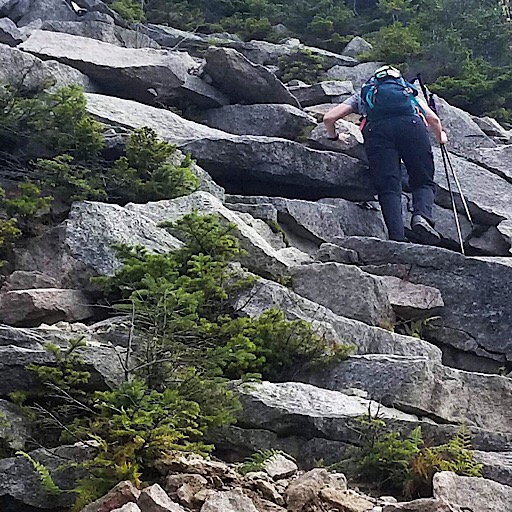 The North Slide is the opposite. 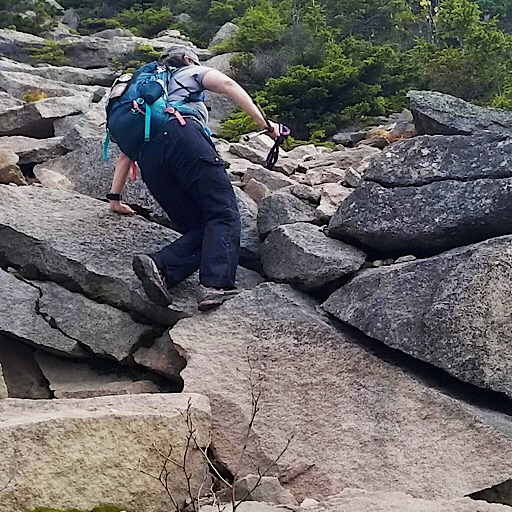 On the North Slide the slab is at the bottom. 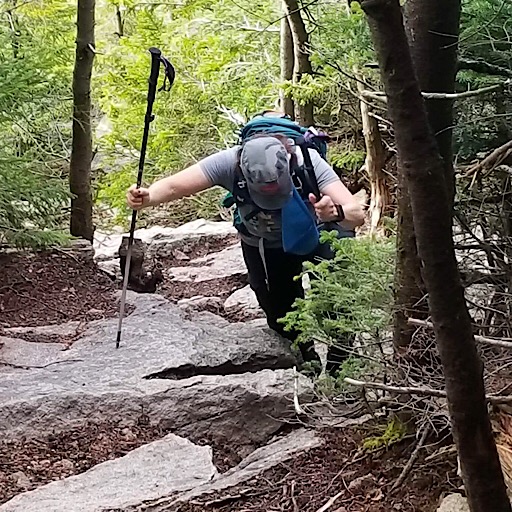 Topping out of the slide. Good job! 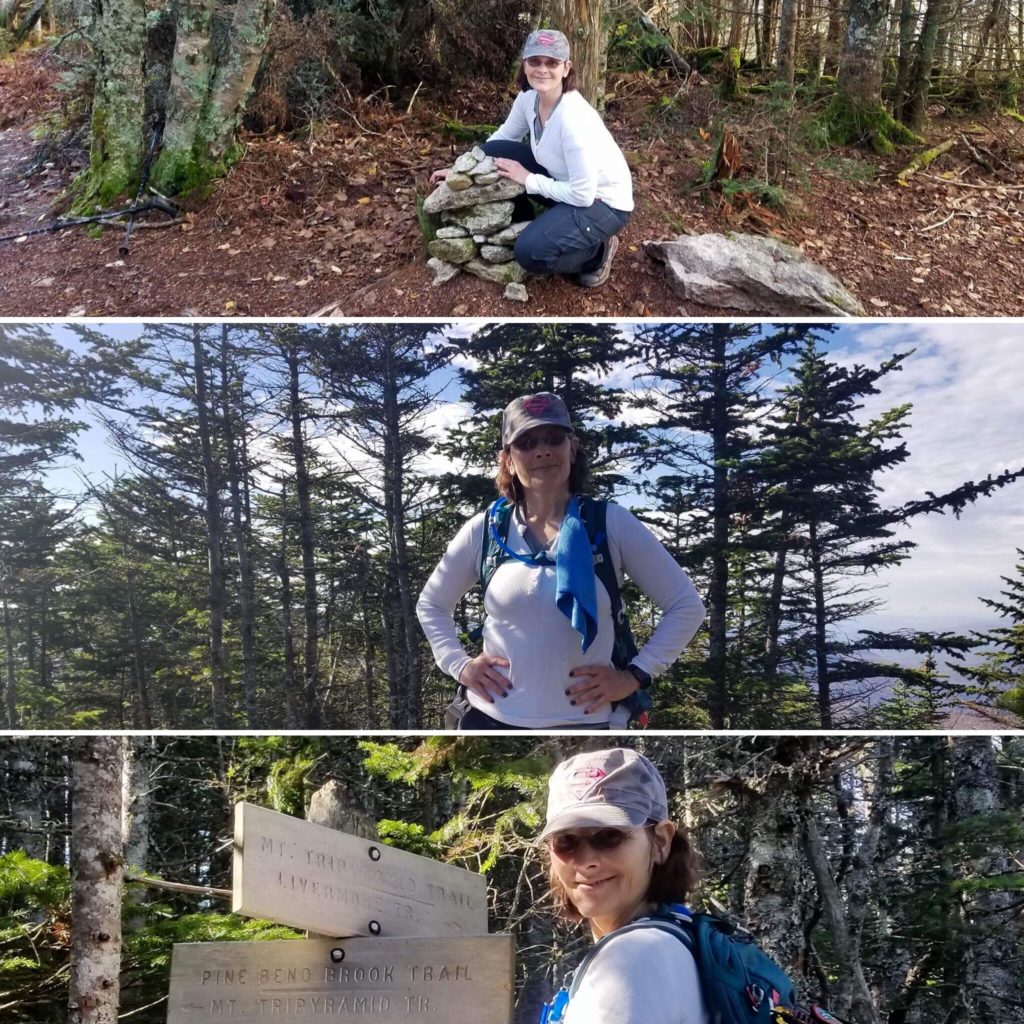 The Tripyramids drop in succession like 1-2-3. South, Middle in the middle, then North. 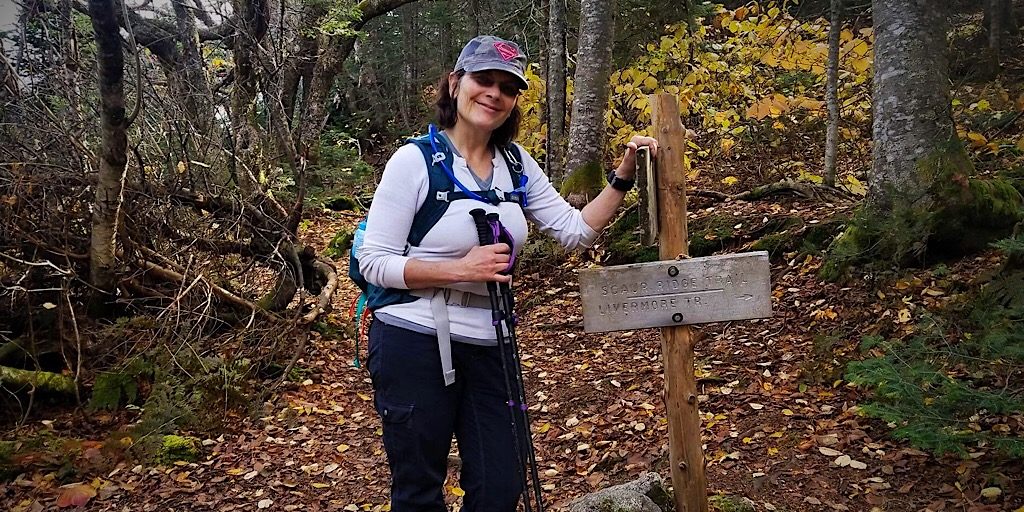 Not that way. This way is safer. 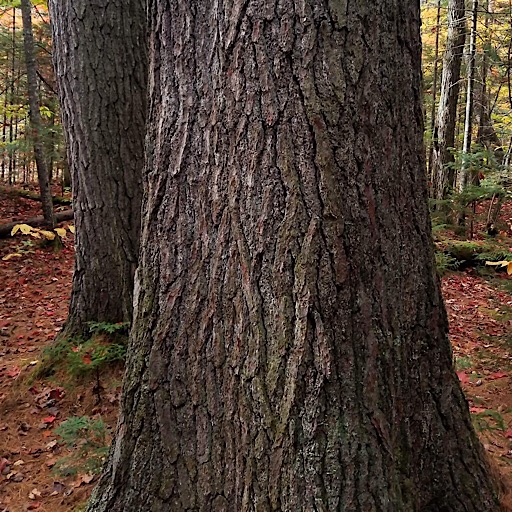 On the way back Howard decides to share Big Pines. 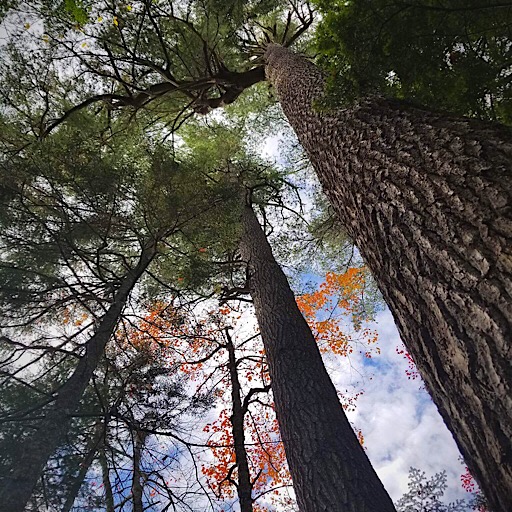 They really are Big Pines!