Arlette Did a Thing

We’re told to believe that a single photo is worth a thousand words. And often that statement is quite true indeed. At other times, however, the opposite statement contains the kernel of truth. Sometimes a photo tells us very little. Sometimes a photo needs a thousand words — or more — for us to comprehend its significance. That is the case with the photo below. What does it tell us? A girl in a polka dot dress with a rather hefty pack and trekking poles (she must be a hiker) is standing next to a plaque. She looks elated. But what else does it say? 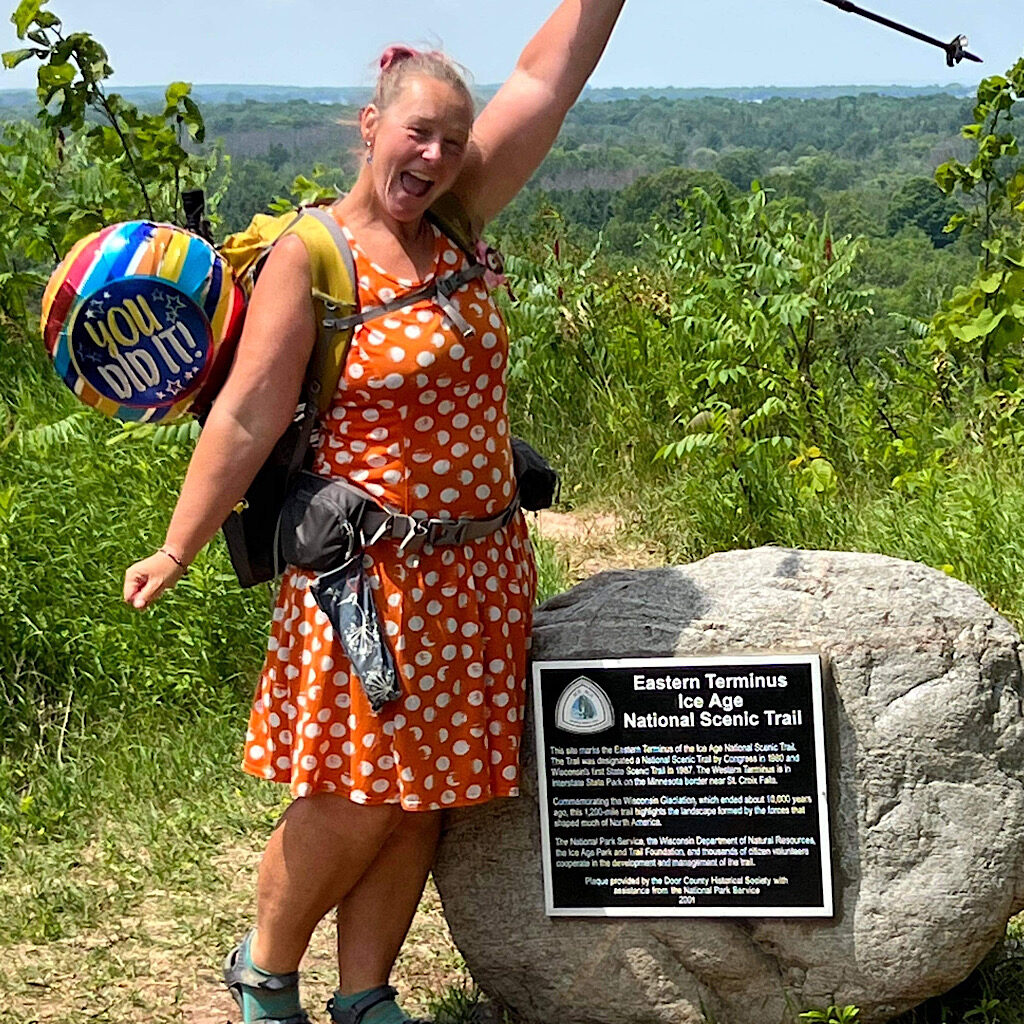 This photo is but a mere fragment of a much larger tale.

If you zoom in to the plague you can see it reads that she’s at the eastern terminus of the Ice Age Trail (IAT). That’s a big trail! We know… we Googled it. Looks like she just finished it what with that huge smile, that deep tan, and the “You Did It” balloon.

Truth of the matter is, in this photo Redline Guide Arlette Laan, had indeed just finished this trail. She hiked all of it. Further, the Ice Age Trail is but one of eleven National Scenic Trails. You’ve probably heard of at least three of them: the Appalachian Trail (AT), the Pacific Crest Trail (PCT), and the Continental Divide Trail (CDT). Well, she’s hiked those, too. All eleven of them, in fact! Moreover, she’s the first woman on Earth to perform this feat of commitment and endurance!

According to what we found online, this means she’s hiked almost 25,000 miles, but the actual number will vary. She did not do this in a single hike. That would be a United States Direttissima, we suppose. In fact, this took years. But she did it. We hope to follow up at some point with more details so please stand by for the extended caption to that photo and maybe ten others. Also, check out this past blog post we wrote when she completed 9 of 11 on the massive North Country Trail (NCT) as it may fill in some blanks. For now, however, we just want to say…

Congratulations Arlette “Apple Pie” Laan! You’re Amazing — an Inspiration to Us All!

TO ADD (July 18, 2022): To learn more about these trails, please check out this very detailed interview from The Trek.