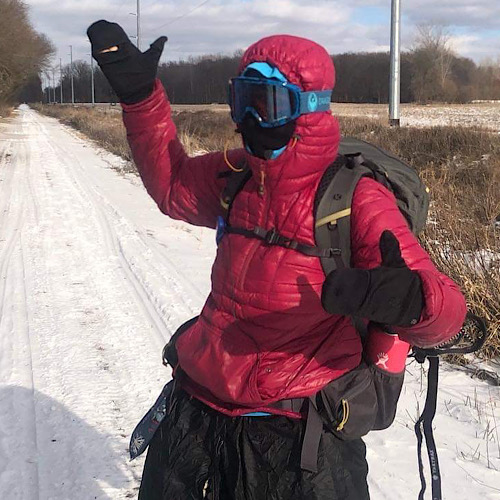 We can barely keep up with all that our Redline Guides do. Between the trips and adventures they lead, the training they put themselves through, and all that they do on their days off recreating, it’s sometimes a little mind blowing and always impressive, at the very least. This post marks yet another accomplishment. This time it’s Redline Guide Arlette Laan… a.k.a. Apple Pie or just Pie. She’s a regular at blowing our minds with all she’s done and is doing. Don’t take our word for it, though. Let’s investigate.

She’s done a lot, and this is an understatement, but the trigger to this post is her recent completion of the 4600- to 4800-mile — a fuzzy number that depends on where you look — North Country Trail. This trail travels through eight states (MI, MN, ND, NY, OH, PA, VT, WI). As noted, she just finished this massive undertaking, but it’s just one of the many National Scenic Trails Arlette has hiked alone or partially with her supporting rock of a husband Rich Gambale, a.k.a. Greenleaf, owner of a Massachusetts-based tree service company going by the same name.

The North Country Trail on its own would-be a lifetime accomplishment for many people, even to some pretty serious hikers, but as mentioned, it’s not her first. After completing the incredible John Muir Trail in 2002 and catching the bug, she began working on the NSTs with the (#1) 2650-mile Pacific Crest Trail in 2003. This she followed with the (#2) 3100-mile Continental Divide Trail in 2004. This was followed up in 2005 with the completion of (#3) the 2190-mile Appalachian Trail earning Arlette her “Triple Crown of Hiking” in 2005 — a badge of honor among “thru-hikers.” 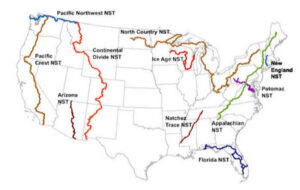 Most would hang up their boots after this and get on with their real lives. Not Arlette. Hiking is her real life! And to that some would say she has it right. Looking at the miles of smiles, we’d agree. We know it’s hard sometimes, brutally hard you can bet, but the rewards… ya know? In any case, she did take some time to hike other things, a lot of other things, even starting a sock doll company, and to maybe take a bit of a breather.

That lasted until 2009 when she took on the (#4) 800-mile Arizona Trail, but after completion she took a little more time to do other things and hike many other trails so let’s fast-forward a bit more. In 2017 she got back to it by taking on and completing the (#5) 1300-mile Florida Trail (which she started in 2013) among others. Then 2018 saw her out there hiking even more other non-NST trails, but she did manage to grab the (#6) 215-mile New England Trail during that year.

So, that leads us to ask another question:

Well, the cat’s out of the bag — Arlette has announced that she hopes to be the first woman in history to hike all of the National Scenic Trails in the United States. In fact, she only has two left: Next up is the (#10) 440-mile Natchez Trace which runs through Mississippi. This she will follow with the (#11) 1000-mile Ice Age Trail exploring the state of Wisconsin. These trails she plans to complete in June or July of this year.

We are betting she can make it happen and of course wish her the best of luck — which is said to be a product of hard work. We think she’s putting in the hours so the luck will come. After that… well, it’ll be great to have her out there guiding again. She’s a natural! Stay tuned.

And Now Some Scenes from the Just Completed North Country Trail… 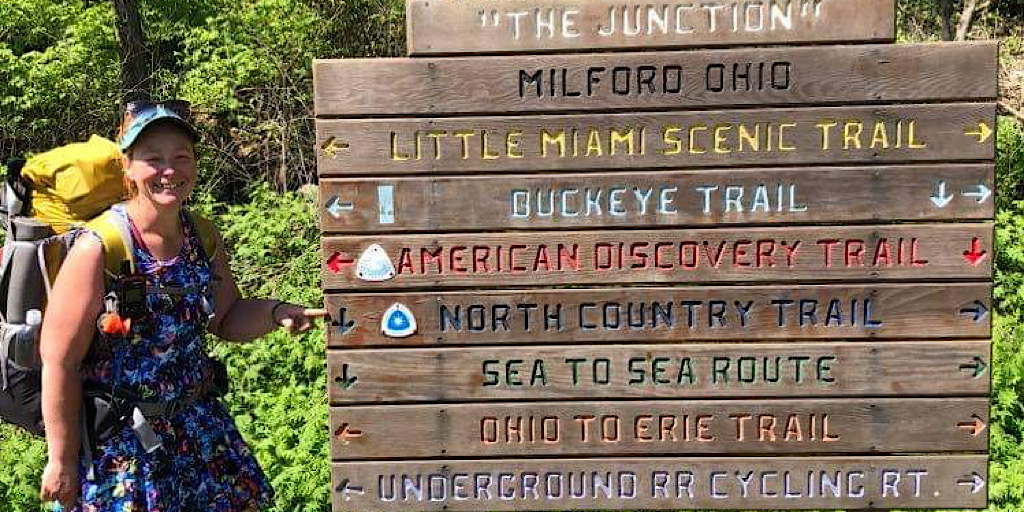 What’s high in the middle and round at both ends? That’s right, Ohio — but do note, it’s actually flat. 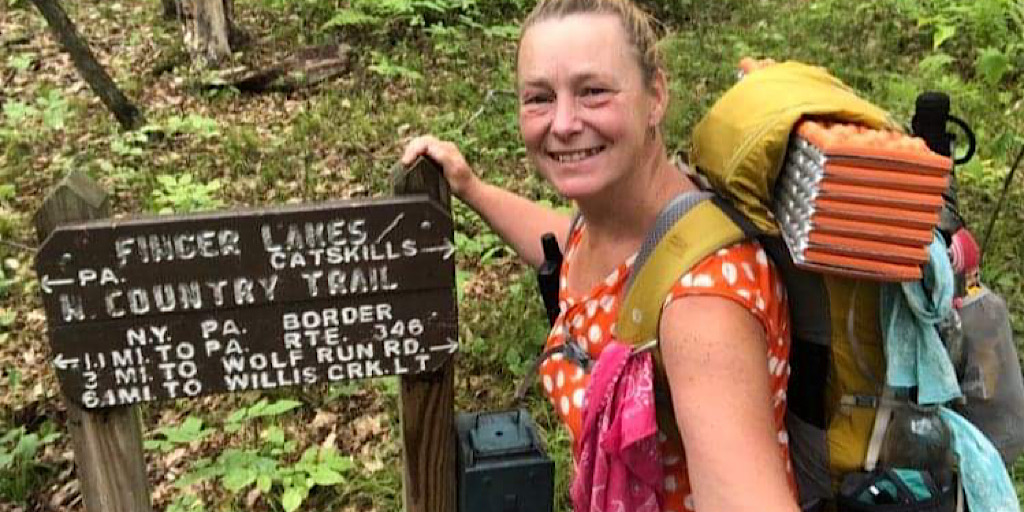 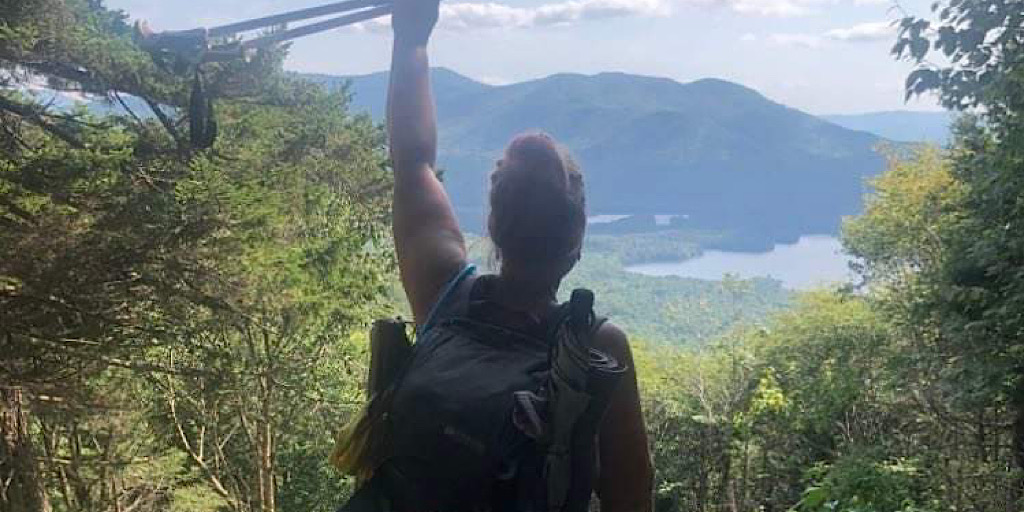 The conquering of Vermont. 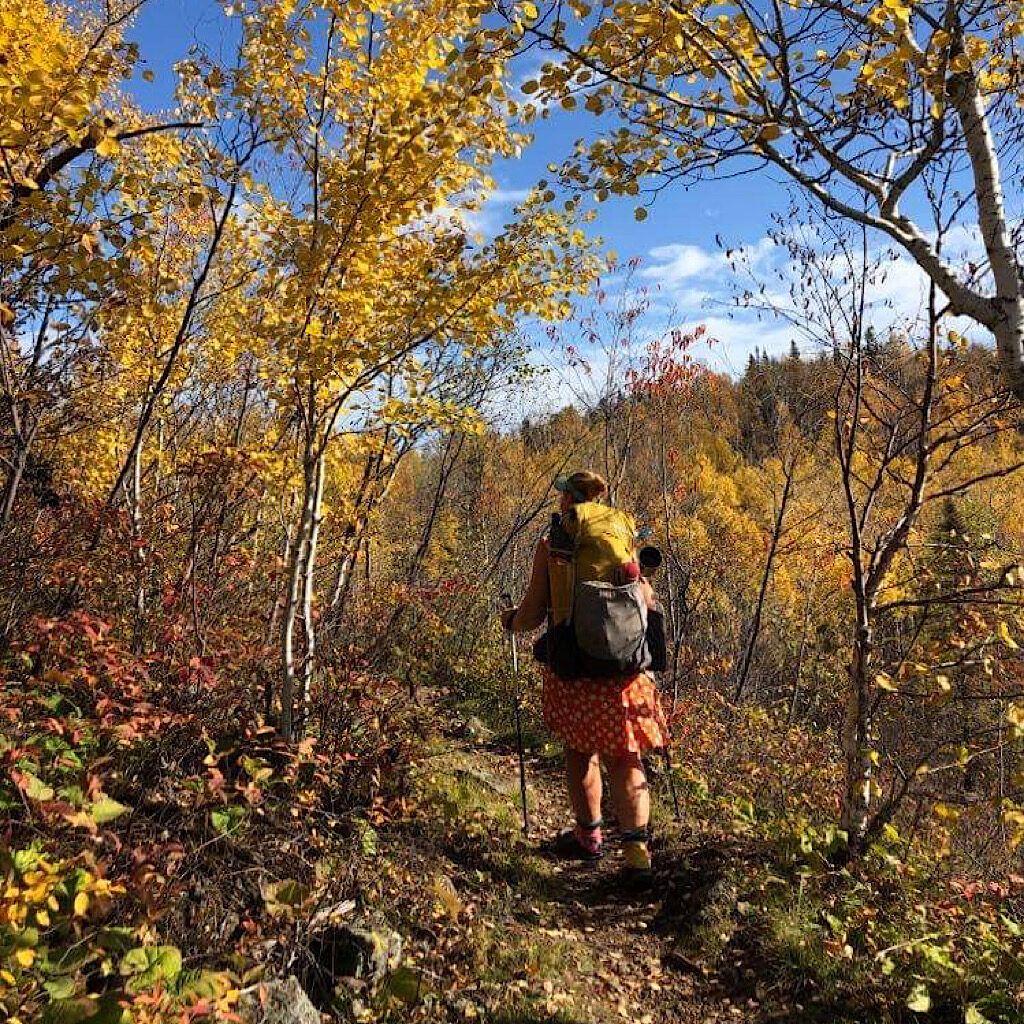 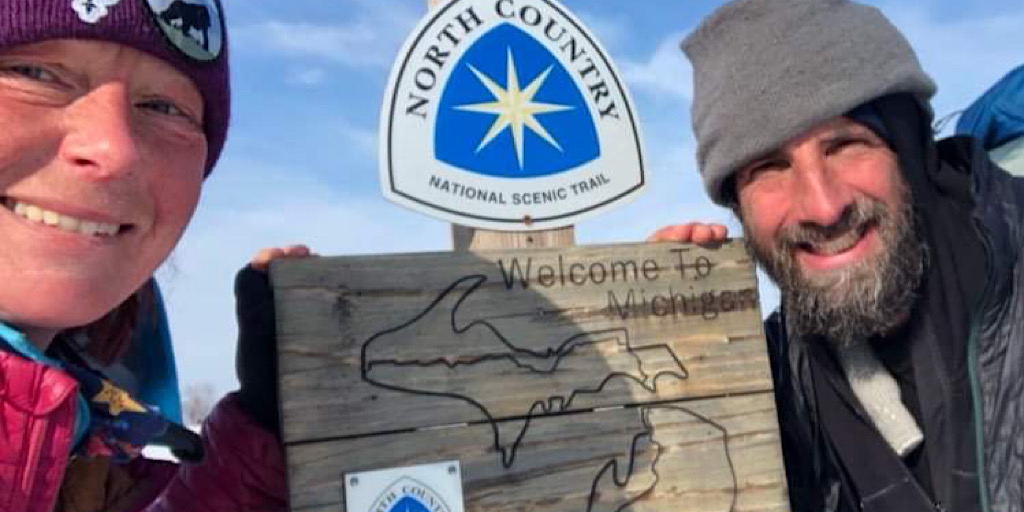 Arlette with the company of her husband, Rich in Michigan. 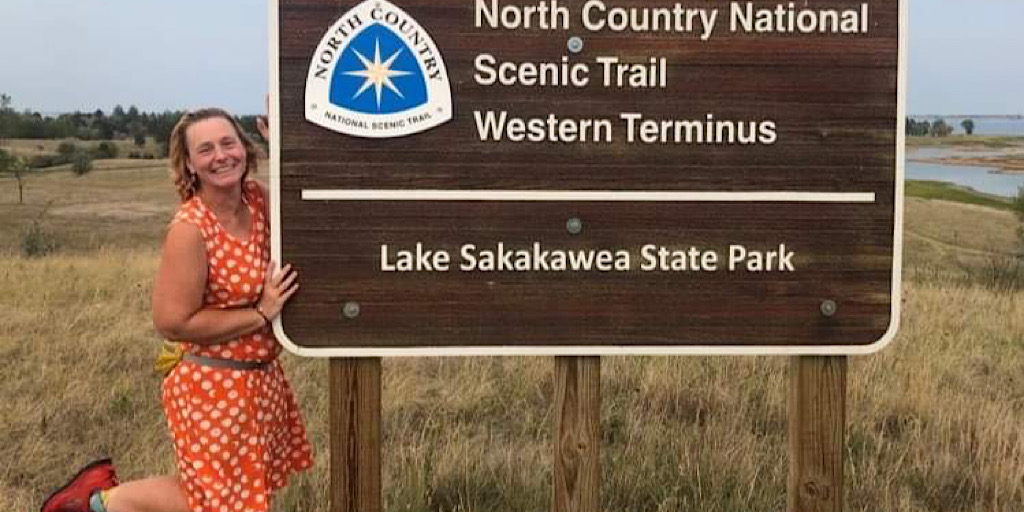 She flip-flopped so this North Dakota terminus wasn’t the actual end for her. 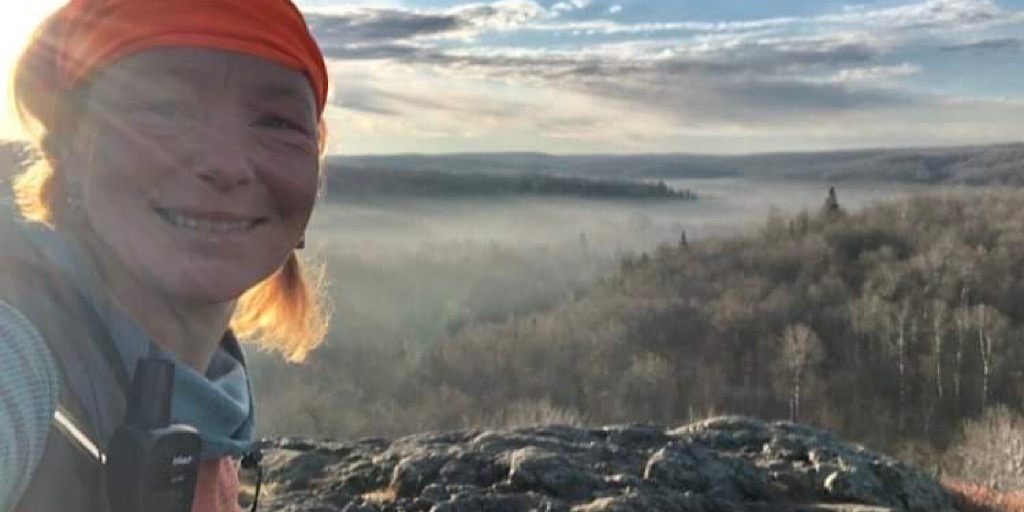 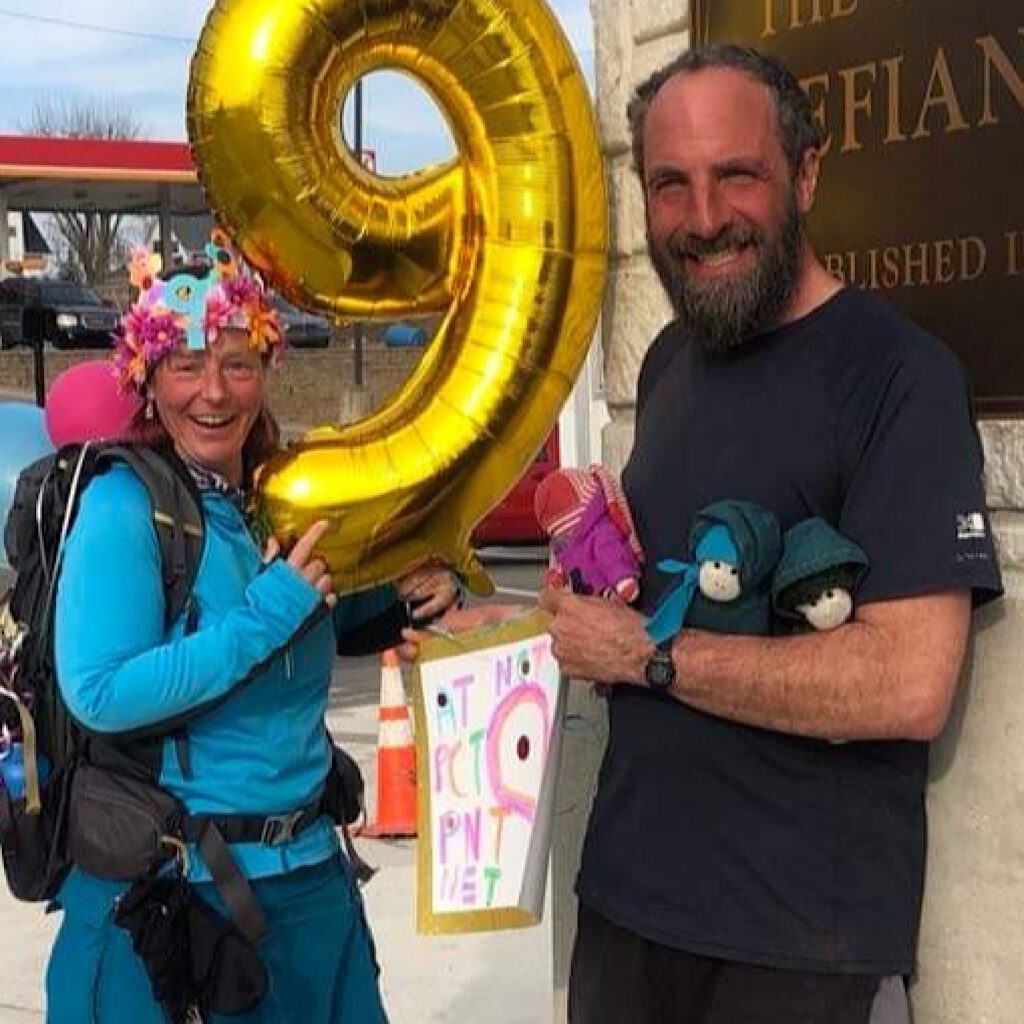 The flip-flop finish ends up being in Ohio so here we are again.