She came to us a new hiker with little confidence. As sure as the sun rises in the east and sets in the west, however, we’ve been witnessing a change in her. Watching from afar like a proud parent as she ventures out west to take on some of what that region has to offer, and seeing this development up close with our own eyes here in New Hampshire’s White Mountain National Forest (WMNF). The adventures she takes on, the routes she is determined to try, the distances and gain that continue to increase. These elements are coming together as one.

This tour, led by Redline Guide Pat Ferland, was a hike onto the Wildcat Ridge the hard (but fun) way — via the Wildcat Ridge Trail. The idea being to grab the two countable 4000-footers “D” and “A” peaks. This route is notorious for its scrambles — ones that usually involve the hands — as well as exposed sections that could under certain conditions be quite perilous, even deadly. She didn’t want to go up the Pole Cat Ski Trail as so many do. Nor did she want to go up 19 Mile Brook Trail (this she planned to exit on). Instead, she wanted to ascend the Ridge.

They began at the Pinkham Notch Visitor Center following the Lost Pond Trail (AT) to the Wildcat Ridge Trail. Then they went UP, taking on section after section. It was slow work in the more technical sections, but she succeeded. At least up the ridge as far as “D” peak’s observation platform. Pat knowingly carried a short section of rope, just in case it was needed to bolster confidence or simply aid balance (it was employed for the latter one time). Due to the time and distances involved in continuing, the team did end up forgoing “A” peak for the day settling for one summit instead of two — maybe her number 14. They did end up on the ski trail, but only for the descent.

Great job we say, to Pat and our guest. Thanks for adventuring with Redline Guiding. And Congratulations! 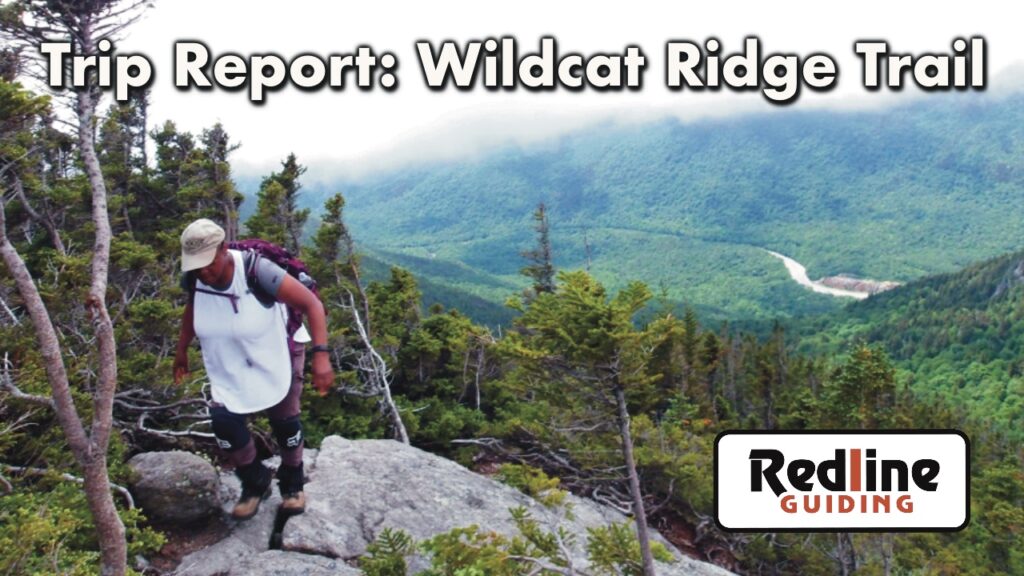