We are becoming known for helping people backpacking the Appalachian Trail (AT), particularly through the State of New Hampshire. As such is the case with a returning guest, “Bear Repellent,” whom we’ve hiked sections with before. She came back, this time to take on yet another section. Being an AT “section hiker” affords her the opportunity to do it her way jumping back and fourth along this eastern trail. The missing section taken on this time was from Glencliff serving Mt Moosilauke (a state 4000-footer) all the way though Franconia Notch to the start of the Liberty Spring Trail. They didn’t exactly hike it that way, though. Redline Guide Arlette Laan led and they did it like this.

Day One — Slackpacking the Moose

The first day was a SoBo or southbound “slackpack” from Kinsman Notch, up the precarious Beaver Brook Trail to the summit, then down the west side to the Glencliff Trail’s trailhead. It was a slackpack in that they needed no backpacking gear being it was a car-to-car hike. They camped that night at a thru-hikers’ impact site. 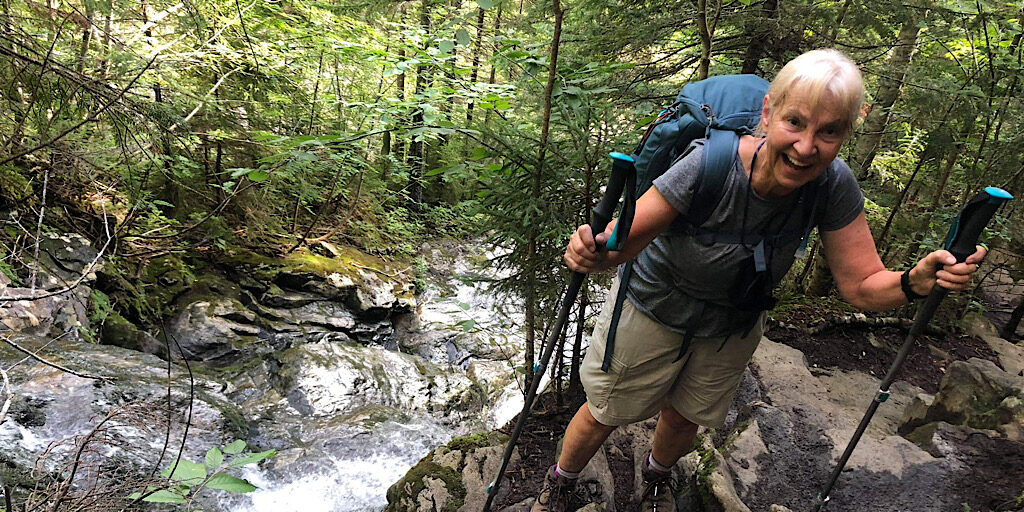 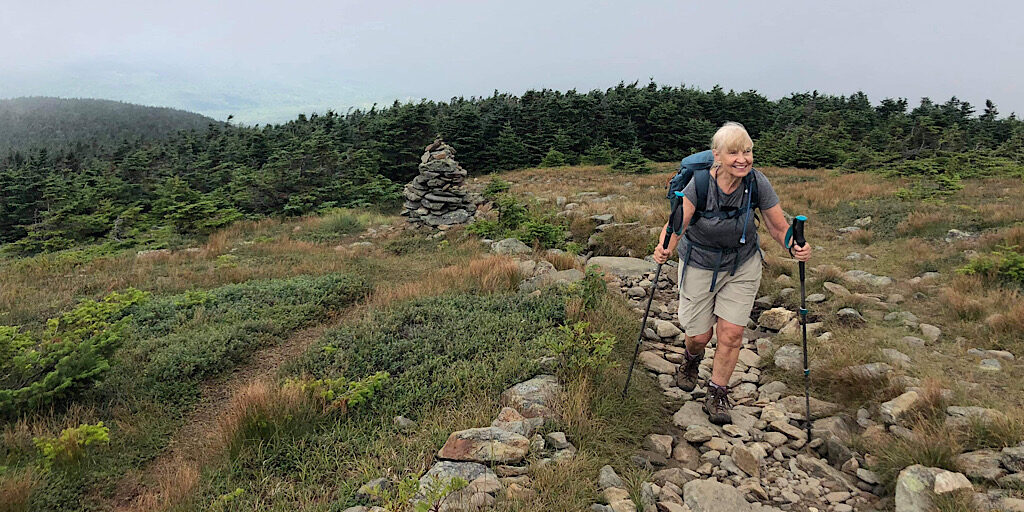 In the alpine zone headed for the summit. 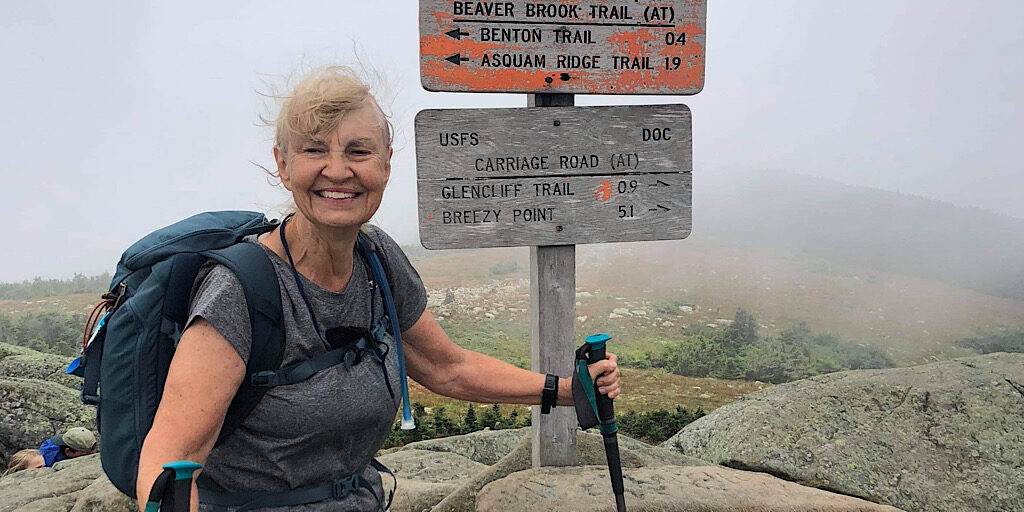 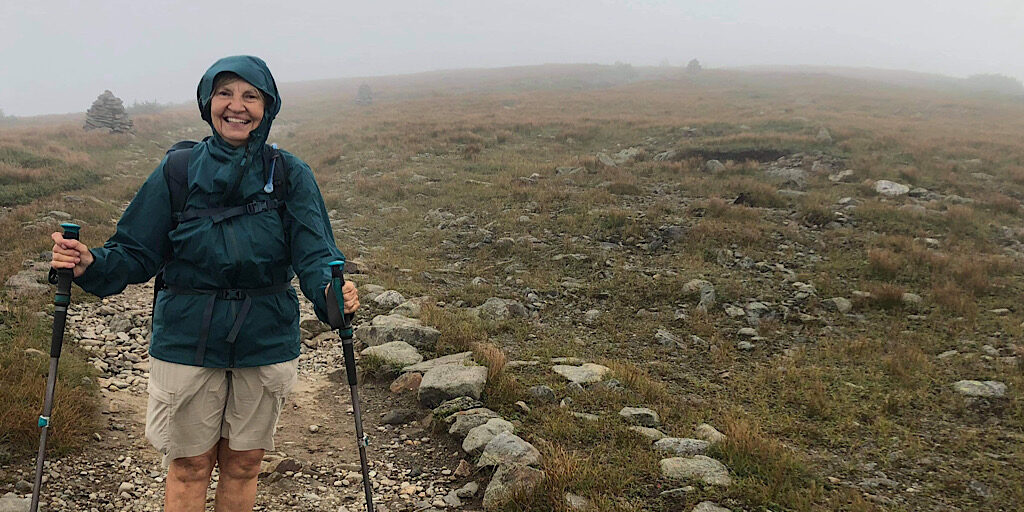 More of that sweet alpine terrain. Now in the clouds.

Day Two — The Other End of Kinsman Ridge

The second day put them on Kinsman Ridge hiking from the Notch to the Eliza Brook Shelter and Tentsite. That day started sunny then got more cloudy as the day wore on. A beautiful, mossy trail mossy with a decent view at the power lines. They saw no bears, as were reported in the area. They did see some fellow AT hikers, however. 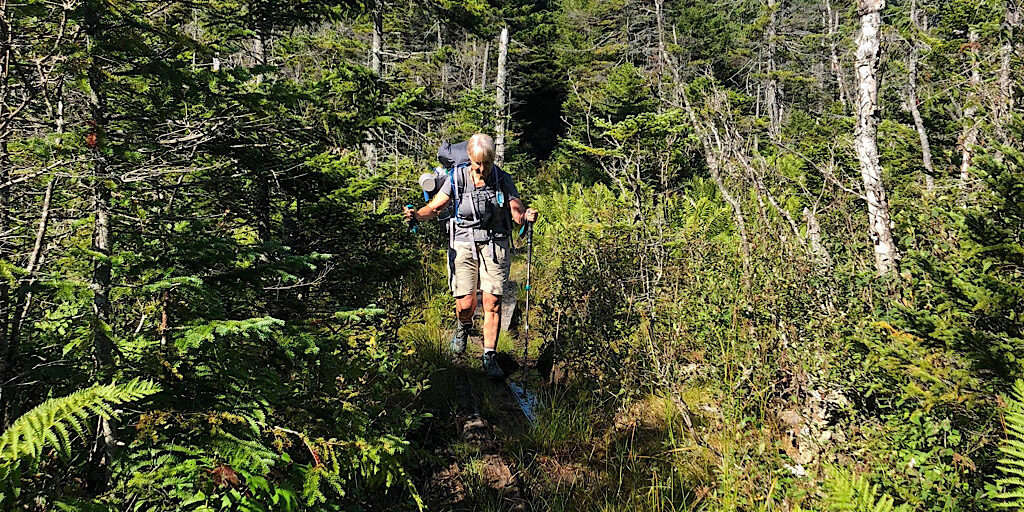 The wilder southern end of the Kinsman Ridge Trail. Lovely. 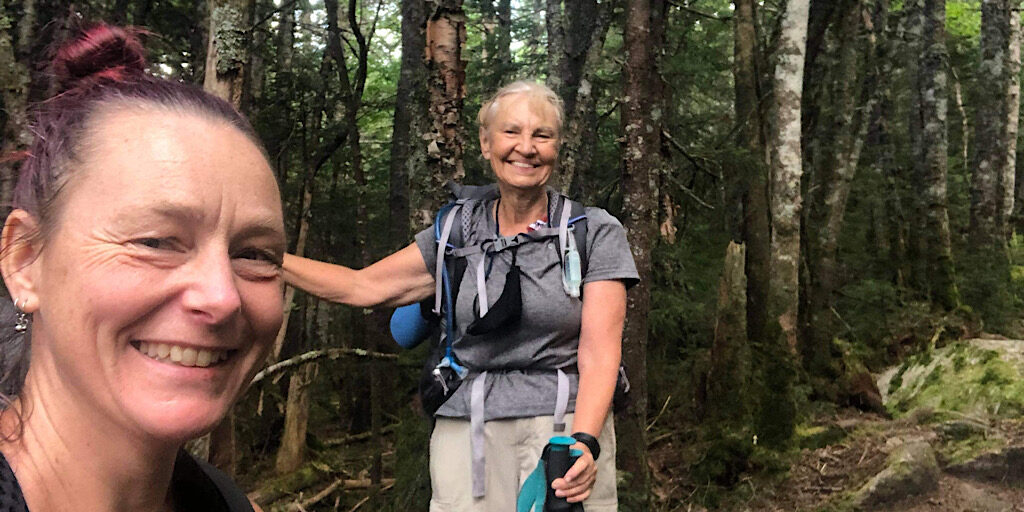 A fine day for this. 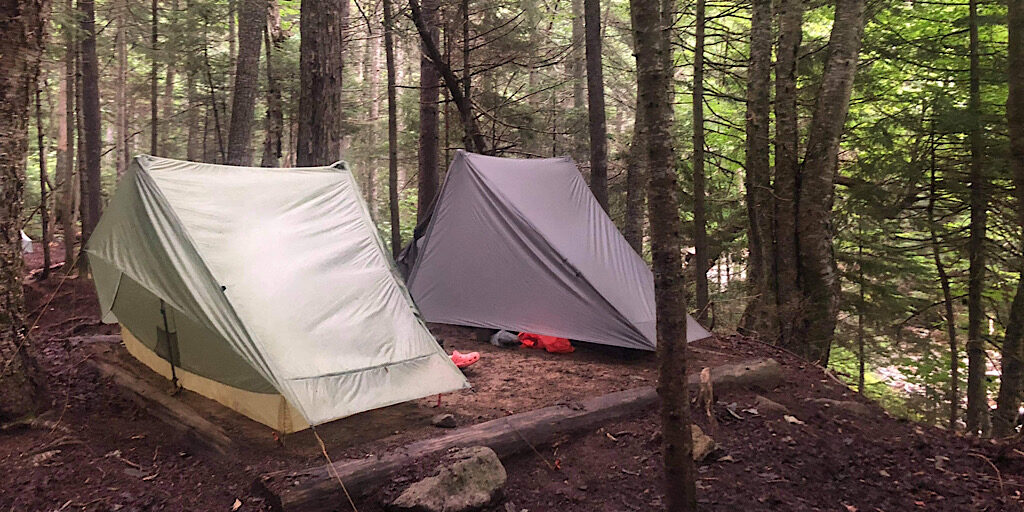 Sharing a raised earthen tent platform for the night.

Day Three — The Busy End of the Ridge

The morning of day three had them leaving the tentsite and make their way to the Kinsman Pond Shelter and Tentsite. On this stretch — covering two more 4000-footers, South then North Kinsman — there of lots rocks and boulders. They also had a short but cold rain shower just below treeline. It was cloudy at first but things were clearing as they approached North Kinsman. They ended that day with excellent views. 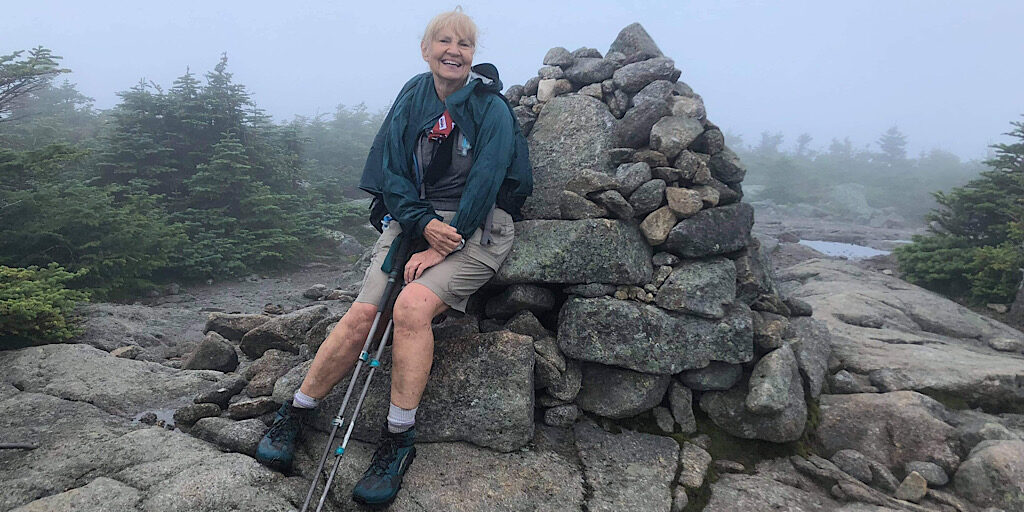 Chilly, fall-like on the South Kinsman summit. Our guest sitting on the throne. 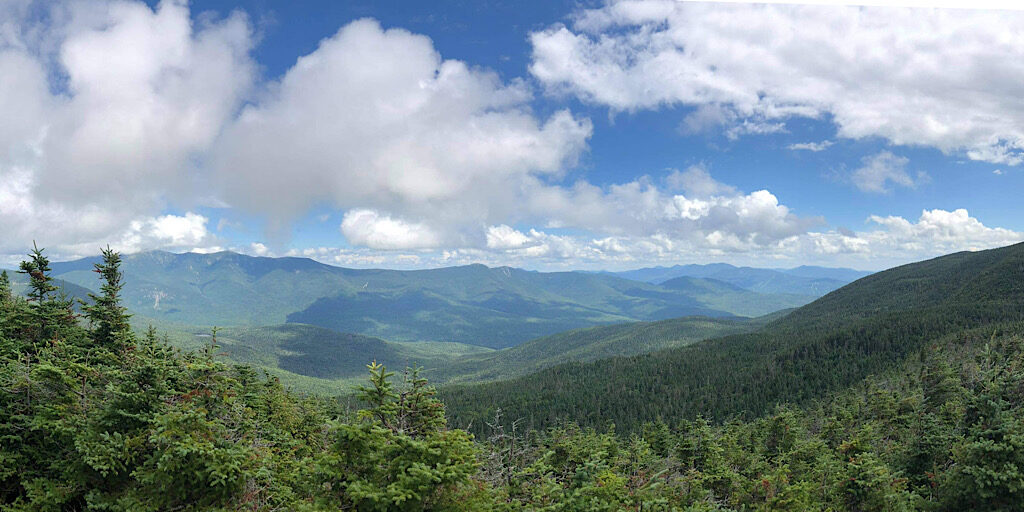 The day got better as it went, though.

After a chilly night with some rain they packed up and carefully descend Fishin’ (Effin’) Jimmy Trail. They stopped at Lonesome Lake Hut and enjoyed some cookie bars. The sun came out while they were there warming them. The trail improves after the hut, the contour lines space themselves out gradually leading them gently down to the floor of Franconia Notch, smooth sailing to the Pemi Trail. 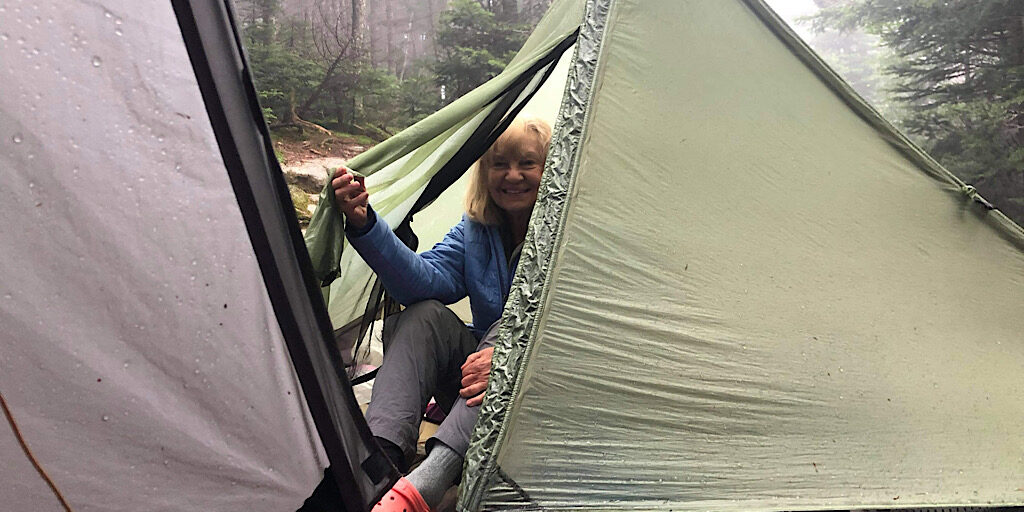 Like the day before, the weather didn’t start out great. 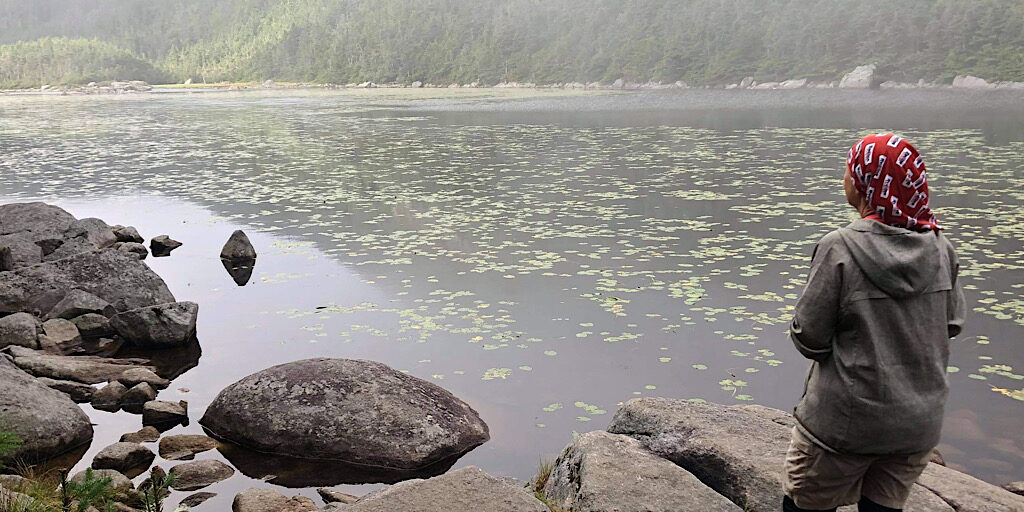 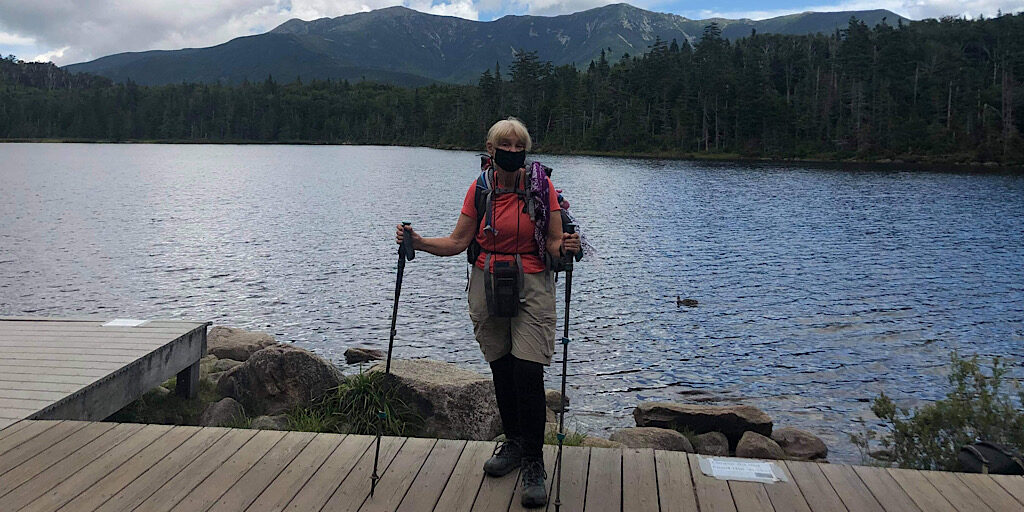 Masked up for the hut at Lonesome Lake. 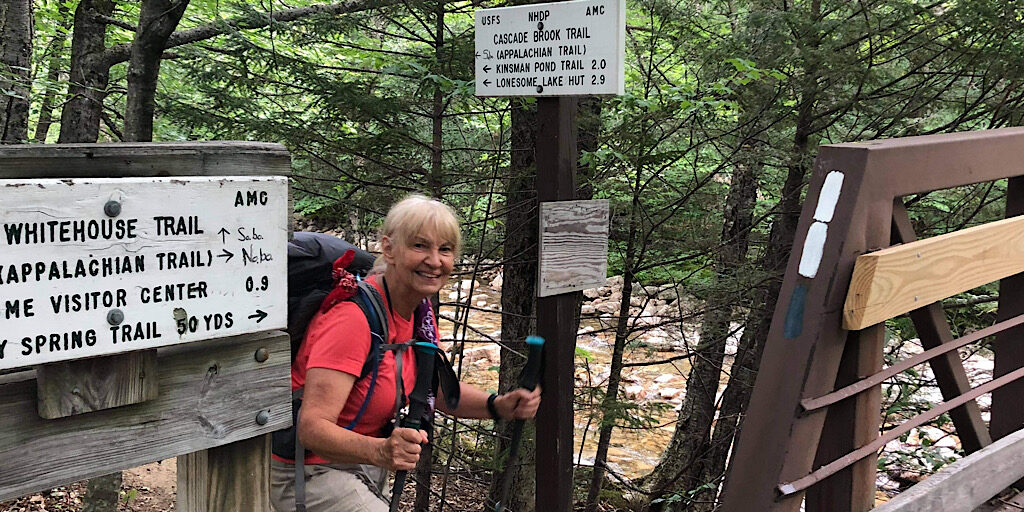 Another chunk gets done. Excellent.

Well done one and all. One step closer. Thank you for once again choosing Redline Guiding.