Momentum is your Friend

Once you get moving it is often better to stay in motion. Momentum is your friend in the right instances. We shared this sage advice during a tricky section of the trail where we thought it may help with a returning guest who was just with us on the Bonds. We hinted in that story that there was much more to tell, a secret we couldn’t yet divulge, and we have since gotten permission to share. So let’s start nearer to the beginning.

They hiked Madison, a newly married couple. The man so entralled by this initial experience, he suggested gearing up and taking on the rest of the New Hampshire 48. Momentum begins to build. And as a couple the quest for the 48 continued. Many summits passed under their heels — the momentum carrying them through — and up next was Owl’s Head. We need to skip to here because it is pivotal. This is where a medical emergency would forever alter the future. Her husband, you see, suffered a heart attack approximately one-tenth of a mile from the Owl’s Head summit. 9-1-1 was called right away, but rescue via helicopter would come too late.

The woman was now on her own, left to complete the list. Five peaks to go. But momentum was fading. She reached out to us, determined to memorialize her late husband by finishing the list, and requested our help. We were honored. First for the Bonds, then for the Wildcats. Her plan was to finish her list on Wildcat D. She explained all this to Mike on the phone. She told him she didn’t like scrambles very much when they spoke of route options, but she said her late husband’s very presence gave her confidence in such places. As soon as Mike heard this he came up with the idea of commissioning Arlette to make a sock doll resembling her late husband. The idea being that his presence would help her overcome the obstacles that she might encounter along the way now and in the future. To help her keep her momentum.

On board for the final two mountains of this adventure was the crew for the television show “Windows to the Wild” hosted by Willem Lange. (We were on this show before for a Mt Washington wedding.) The talent met us at each end, but the production crew shot video and stills throughout the hike. On lead for both hikes was Redline Guide Arlette Laan. Also present was owner Mike Cherim. Due to the number of folks in the group we really needed a second guide, but since we weren’t hired by the crew, Mike volunteered to hike along with the group in case his help was needed. He also wanted to personally hand the doll to our guest on her final peak.

As a group they made their way down the mountain. The hike was fun, the temperature and humidity better than it had been just days before. At each summit our guest released a small amount of her late husband’s ashes. The wind, she said would always begin to blow when she did this, and it always seemed to send some of his ashes back at her, but she rather appreciated this. She could feel him in that wind. Feel the dust in her hair. It was a response, she was sure, and she relished it. The 48 done, now, she might go on to do her 52 With a View. She now has a new friend, a rescuer who answered the call on that tragic day. She attended the Bonds backpack along with the Wildcats hike, there by her friend’s side. Hopefully that is where she will stay helping her keep her momentum as she takes on this new list. For now, however, let’s just sit back and check out these photos.

Update: Here is the Windows to the Wild episode 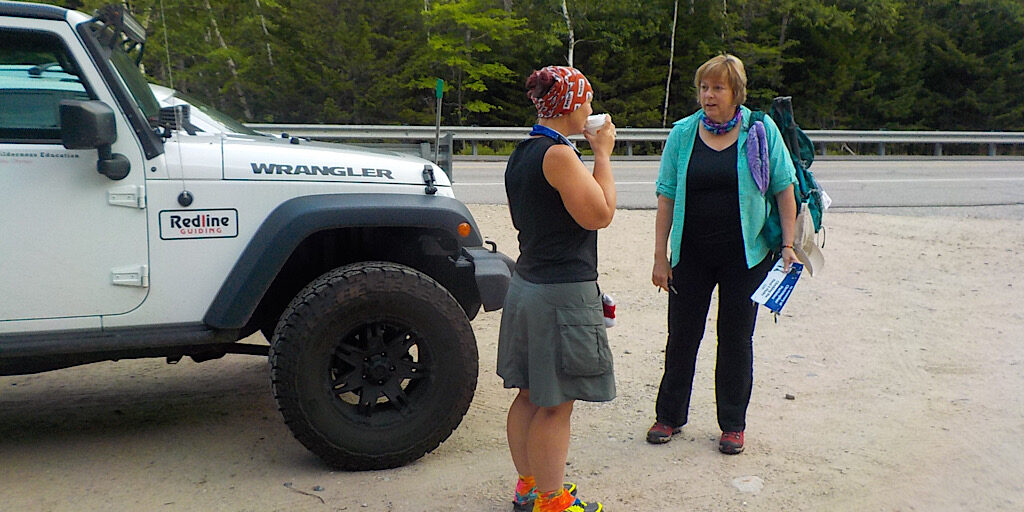 Arlette and our guest meeting at the trailhead. 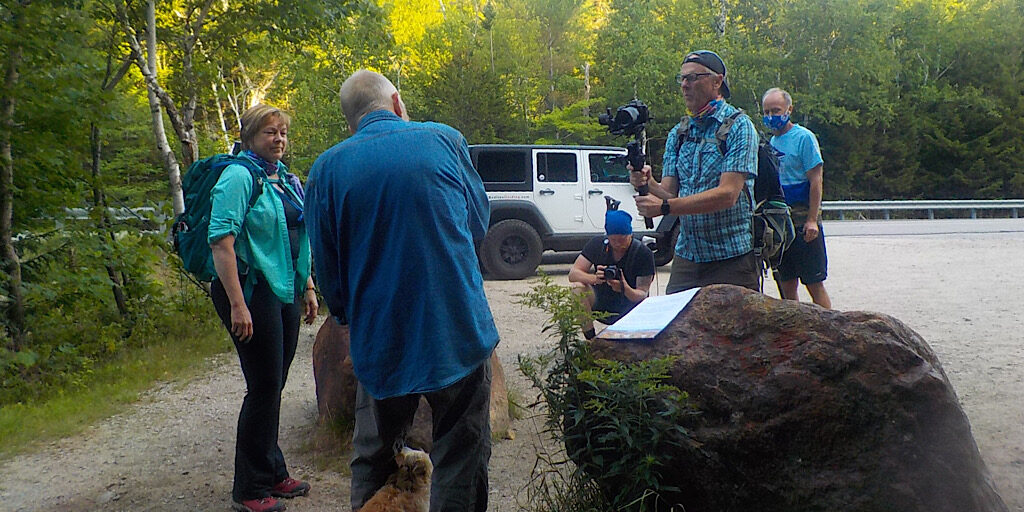 Willem getting some opening video. This required a few tries thanks to traffic noise and Willem’s dog hacking up a pine cone or something. 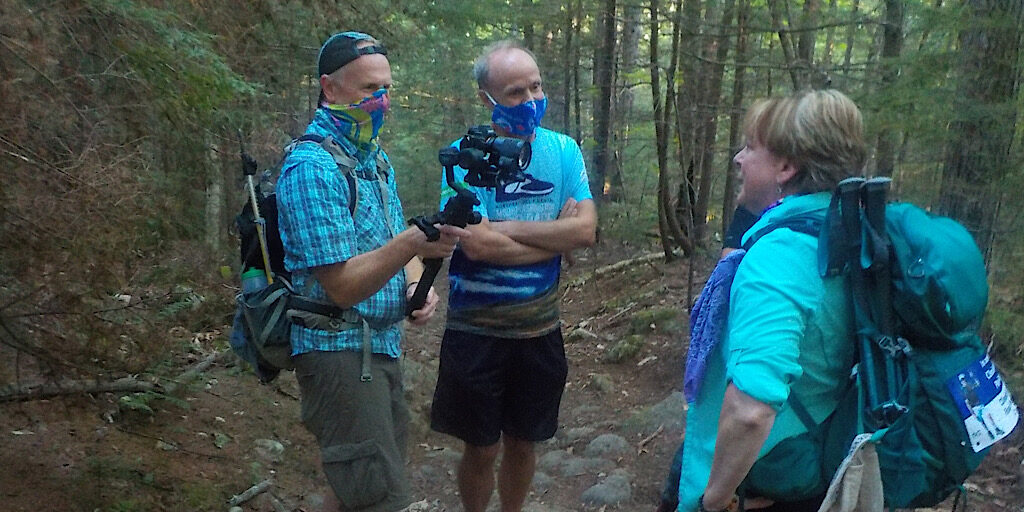 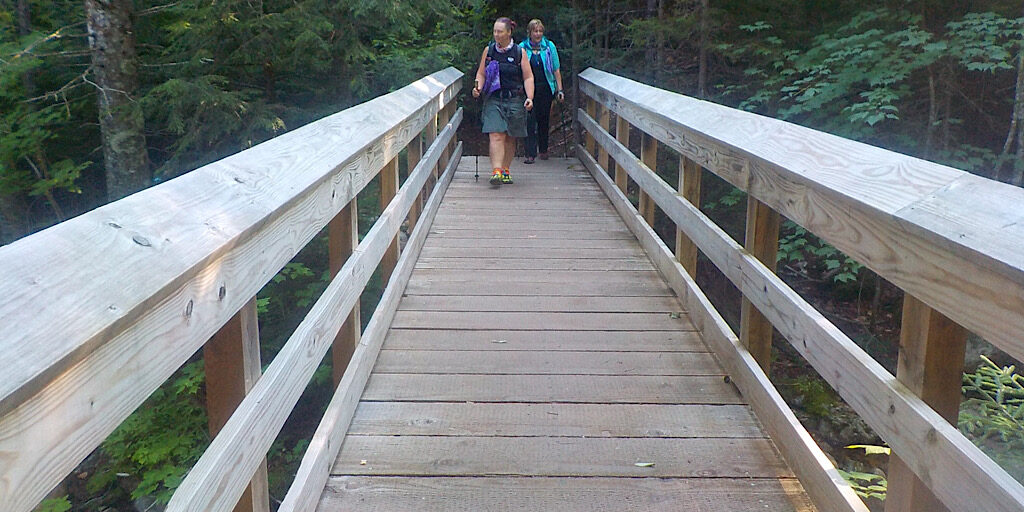 Making our way in and up. 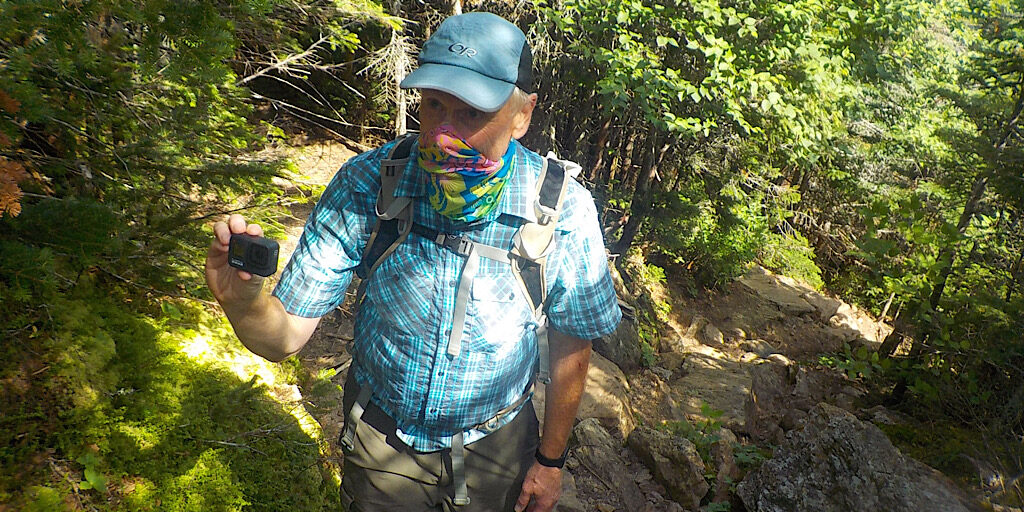 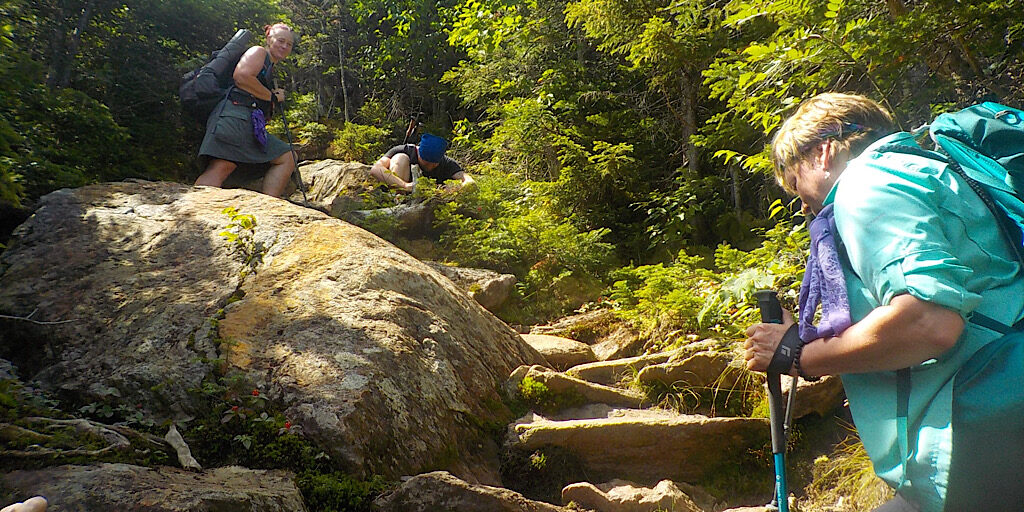 Climbing toward the A-Peak. Arlette being encouraging and patient. 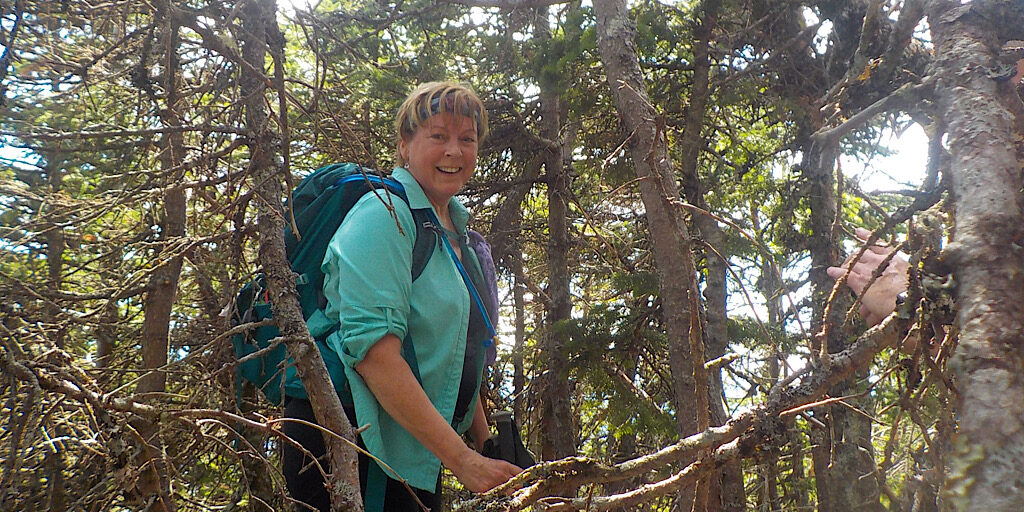 Wildcat A… congratulations! One more to go. 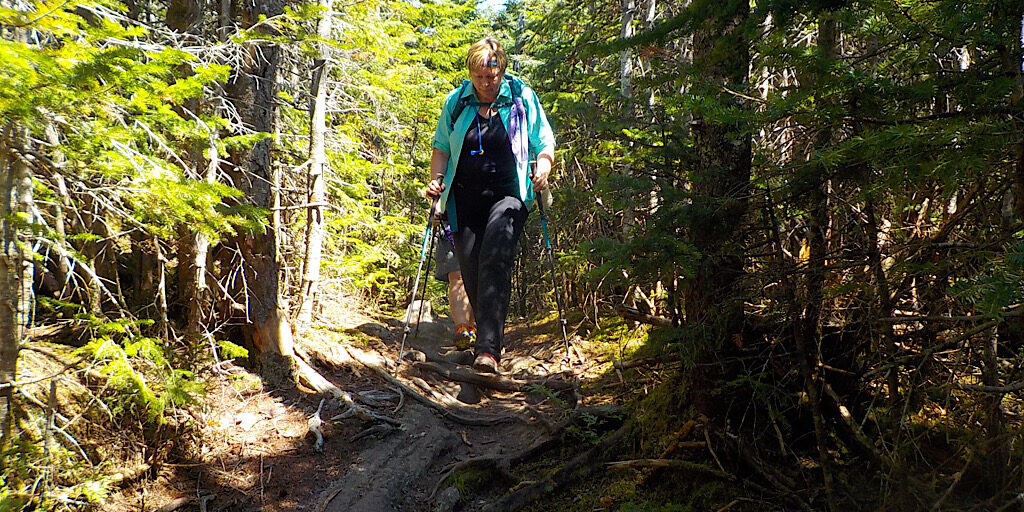 Making our way across the ridge. 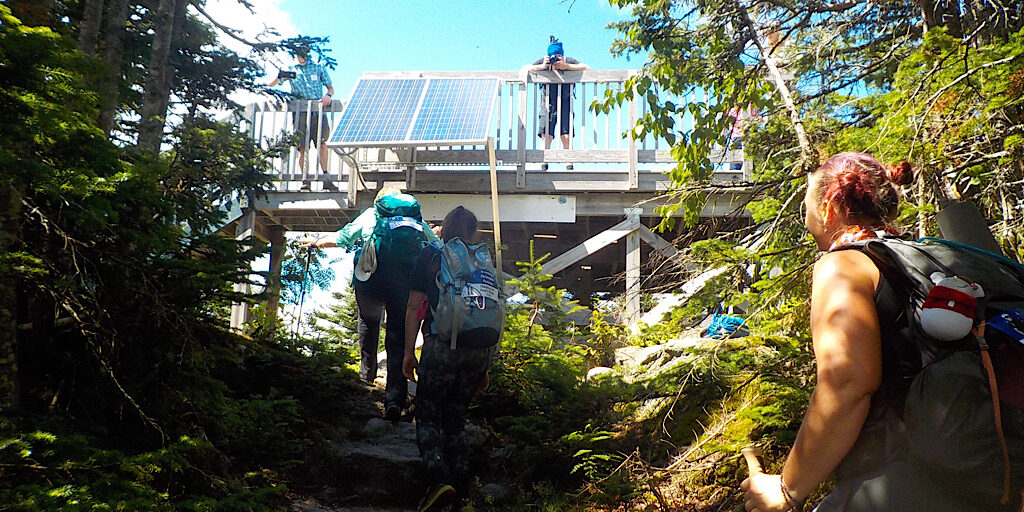 The TV crew awaits her approach to the final peak. 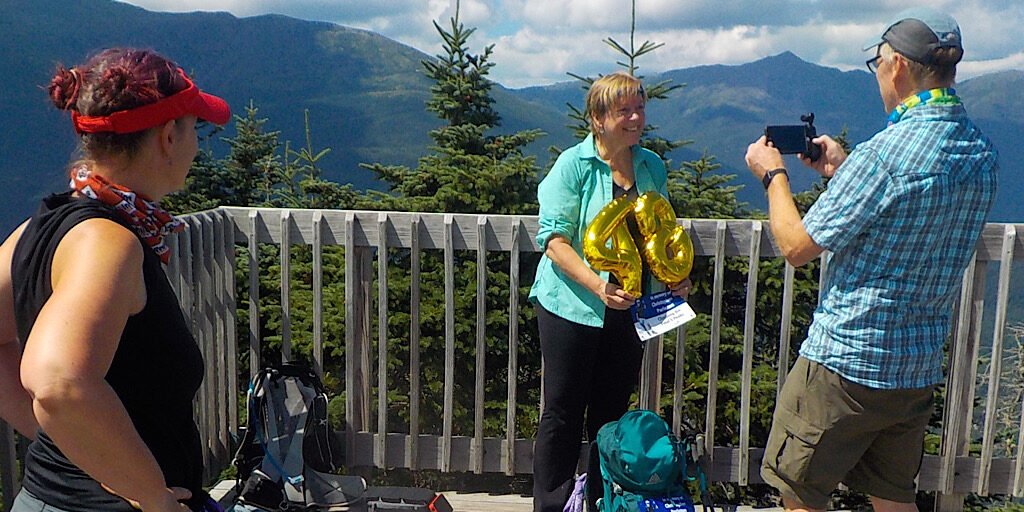 She breaks out the “48” balloons in celebration. Very well done. 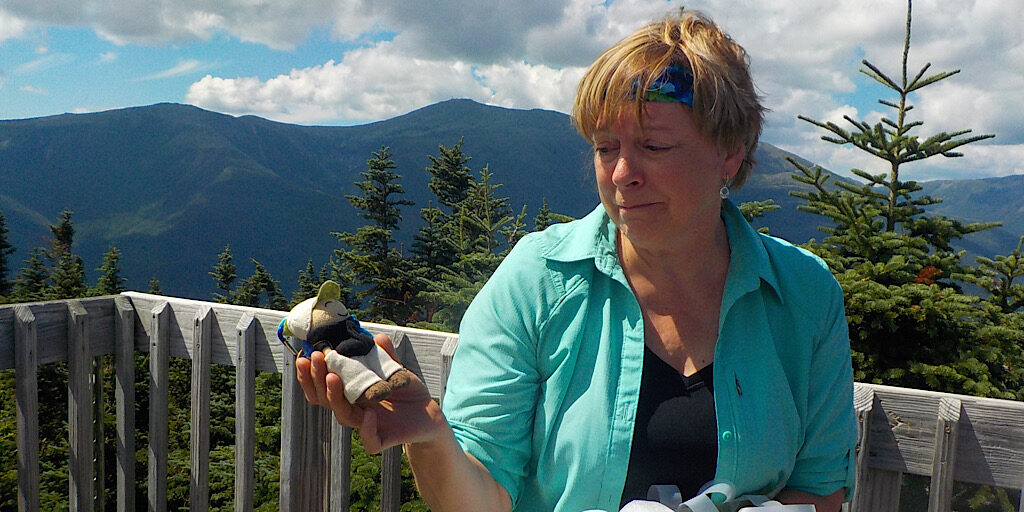 Mike presented the doll he commissioned Arlette to make. She was momentarily overcome with emotion. She liked the gift. 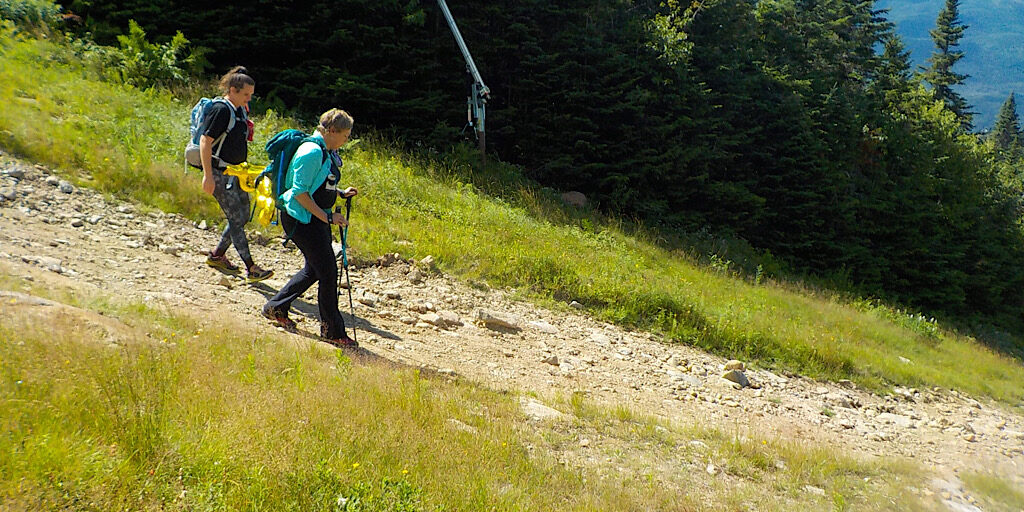 We all made our way down, here our guest shown with a new friend lending her encouragement. 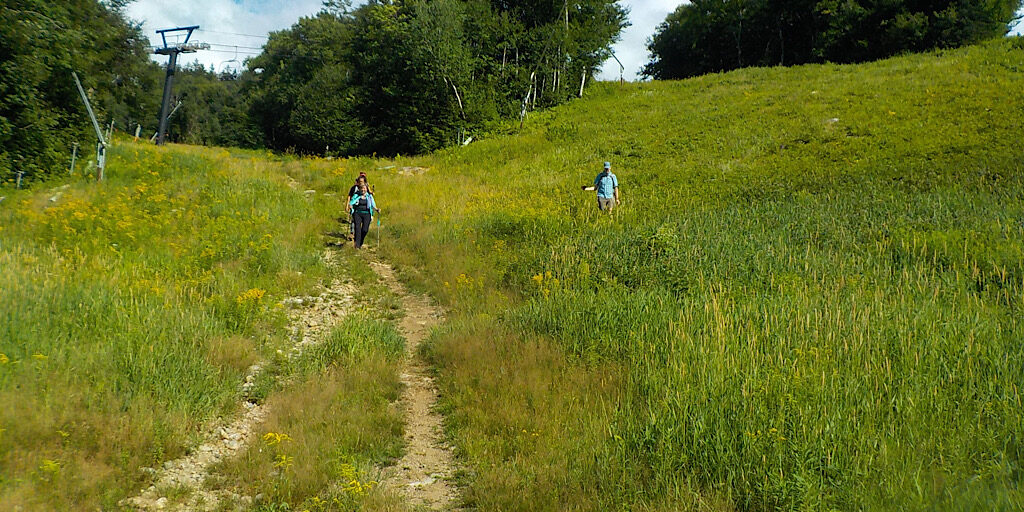 The TV crew awaiting, filming her final paces to the finish line.

Great lead, Arlette and Mike. Congratulations to our guest for staying moving and finishing her 48. Thanks for choosing Redline Guiding.