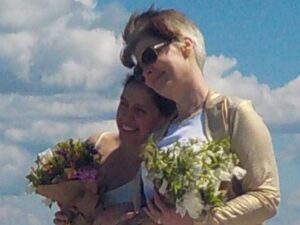 It was clear to anyone looking out their window early that morning that this Independence Day was going to be spectacular. First of all, on tap for the day was a mountain wedding. Second, the weather forecast for the New Hampshire higher summits was looking really good. It was calling for cool temperatures in the fifties with partly sunny skies. Sure, there was a chance of thunder showers in the afternoon, but we weren’t worried. That is a pretty common thing to hear in the summer and most of the time it turns out nice. We stay wary, but try to not let it ruin what would probably end up being a stellar day. As it turned out, thunder wasn’t a thing to be heard at all and it was mostly sunny with very few cloudy interruptions. As said: it was absolutely spectacular. Blessed!

The order of business, as noted, was a mountain wedding. Specifically the wedding was held in witness of a fair group of Random Hikers who were being very careful to trod only on rocks so as to preserve the delicate alpine vegetation. It was a fun crowd who love it up there as much as we do. And it was a wedding! Once the guests were in position, owner and JP Mike Cherim assembled with the two individuals to be married atop a massive bulge of white quartz located within a stone’s throw to Star Lake. For those who don’t know, this very shallow alpine “lake” is nestled between Mts Madison to the east and Adams to the west just over the town line into the Thompson and Meserve Purchase. This is one of many unincorporated townships located in the mountainous regions of the state. 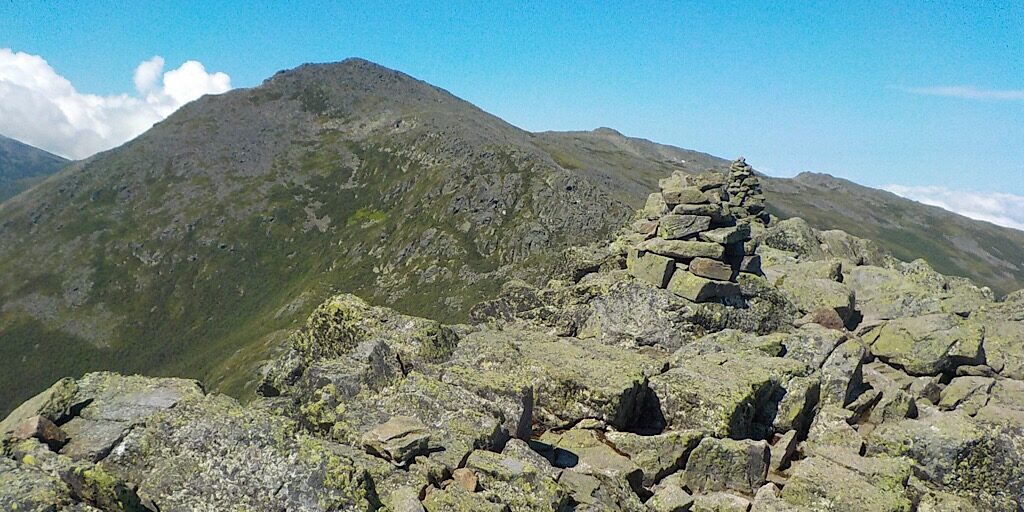 Mike arrived early and took a few scenery photos. This is Mt Adams taken from the Mt Madison summit. 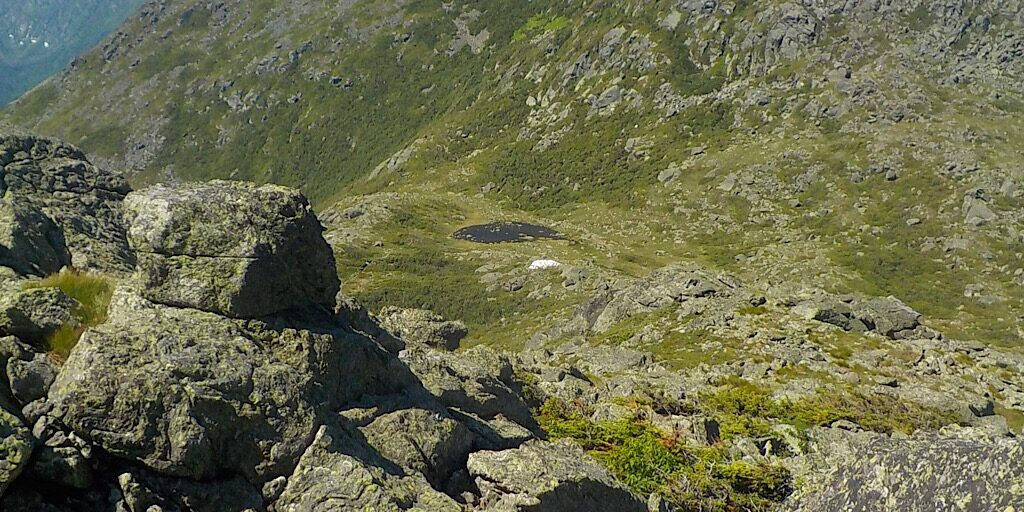 Descending Madison, Star Lake and the unnamed white quartz rock is visible. Let’s call it Kiva Rock… pass it along. 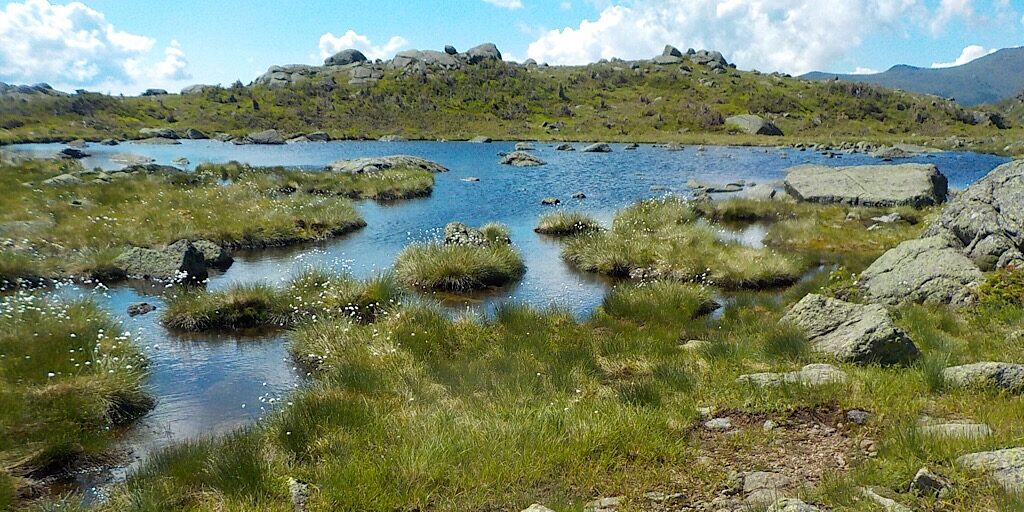 Flowers adorn the edges of tiny Star Lake. The Parapet is in the background. Beyond that there is a story. 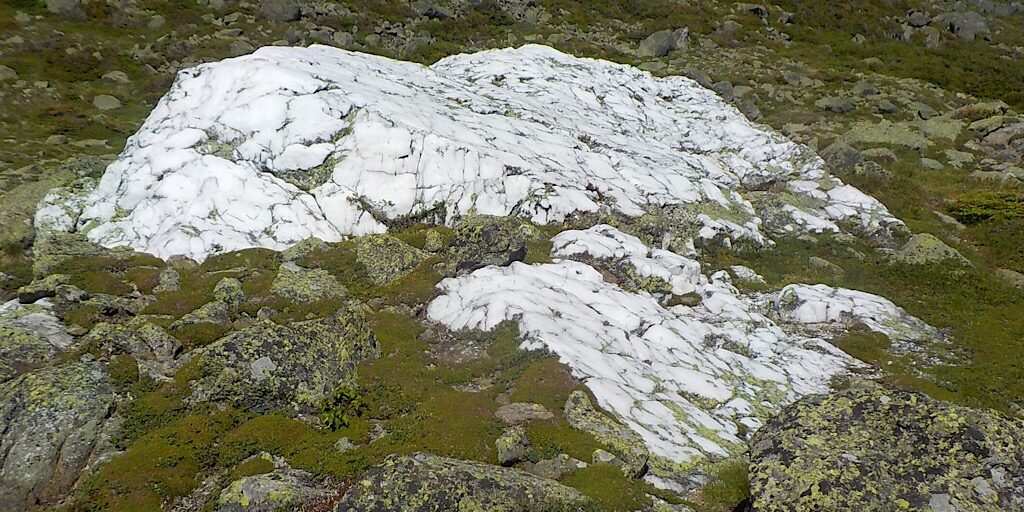 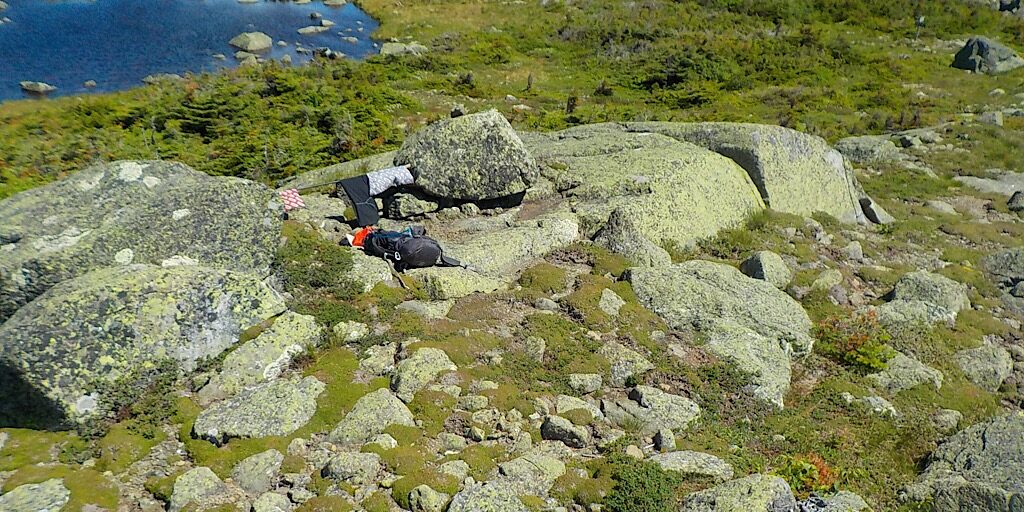 Confirmed. This is a fine place for a brief nap. 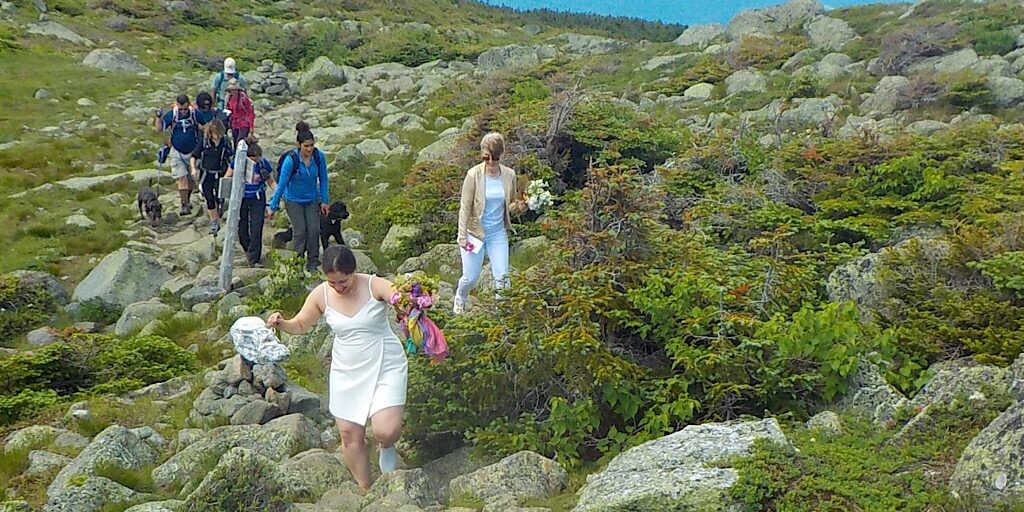 The couple arrives after changing at the hut. 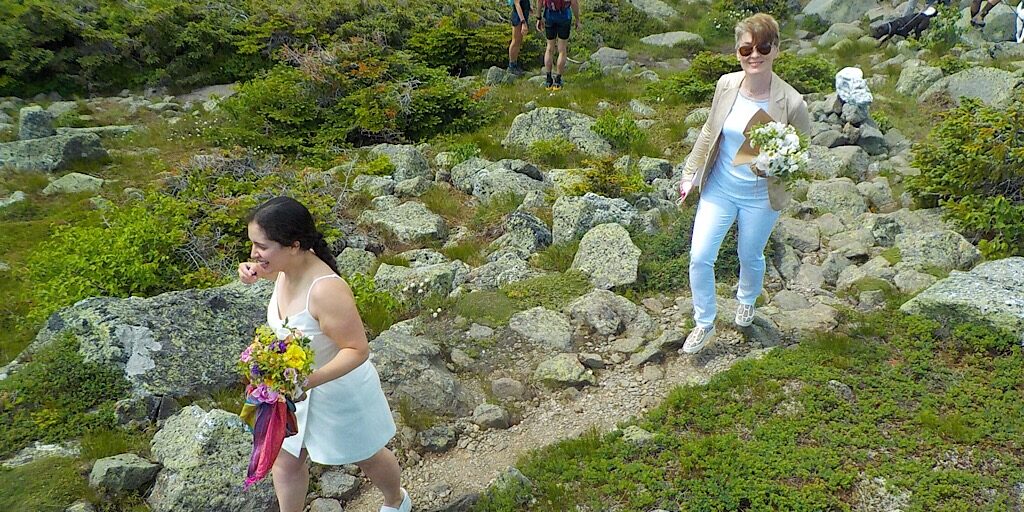 They close in on the spot. 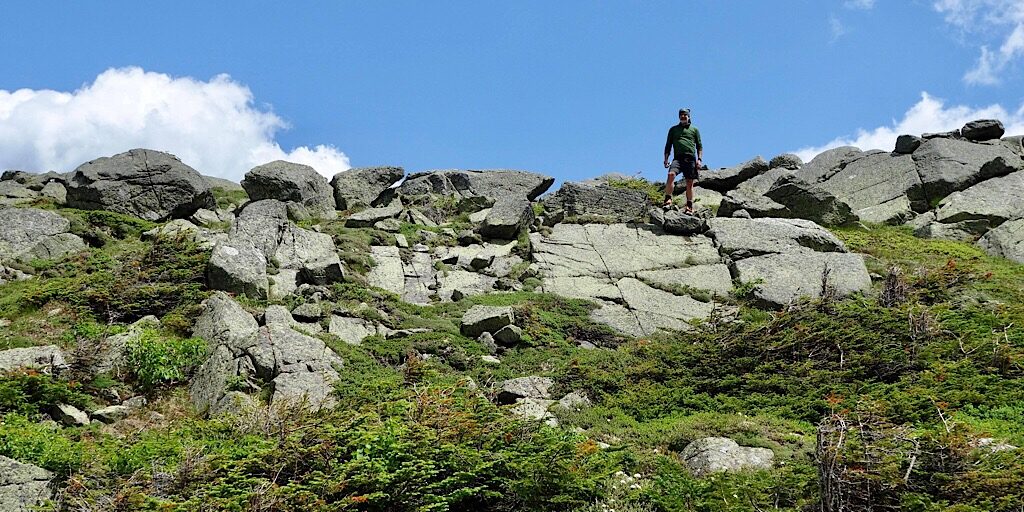 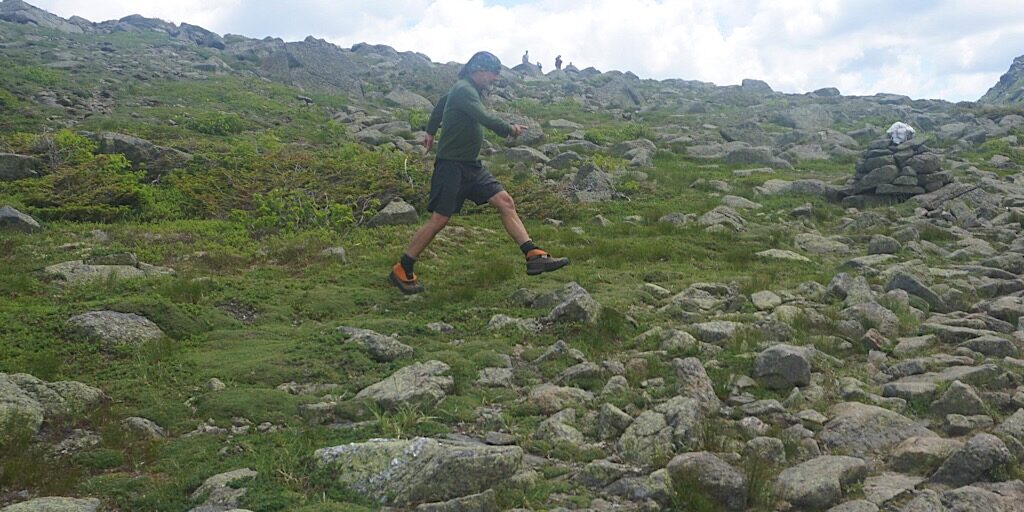 Mike moves into a new positions by carefully rock hopping but here he appears to float. Photo by Amal. 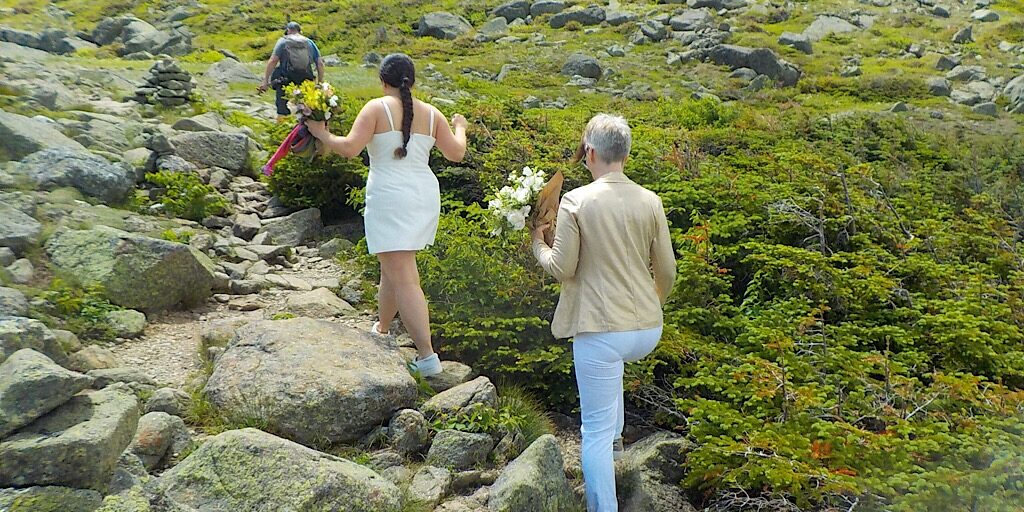 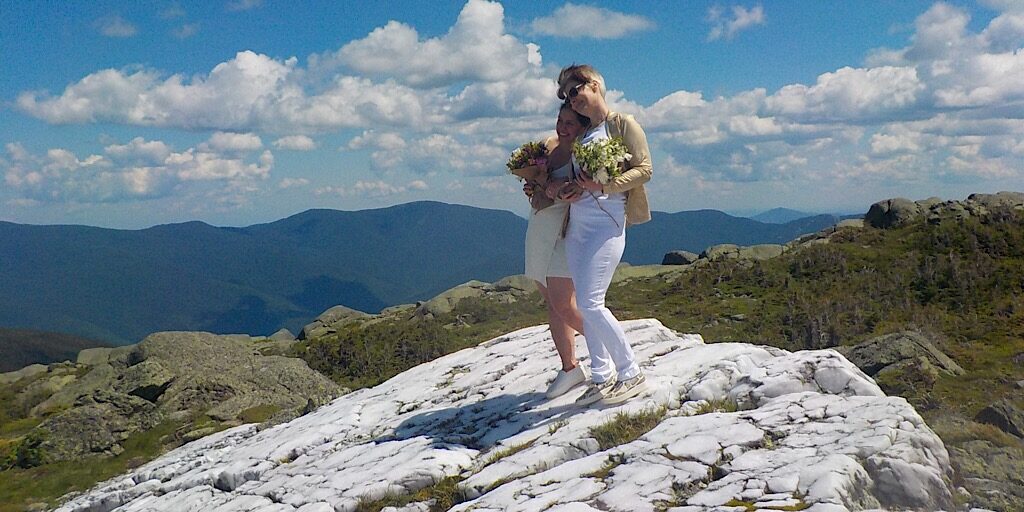 The couple are on the spot. It must be time. 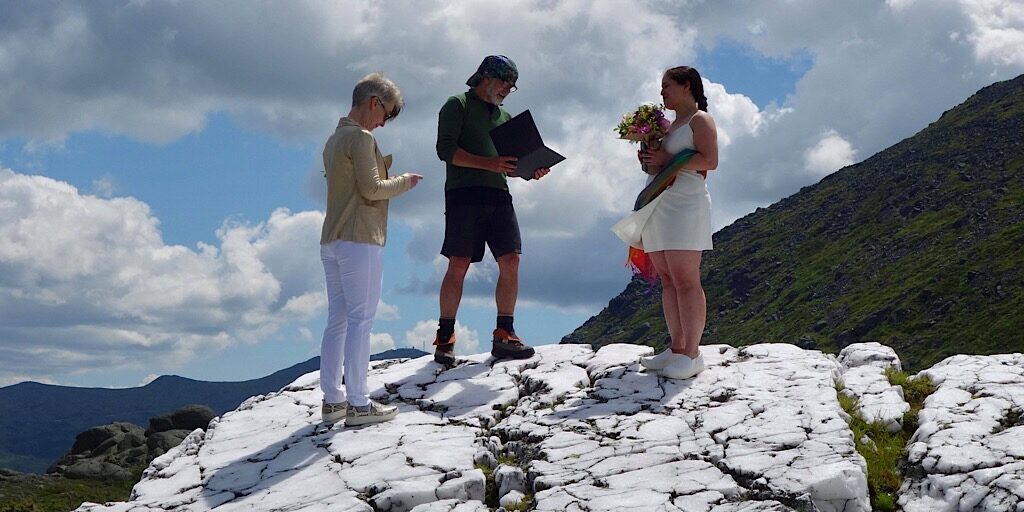 Mike reminds the couple the ceremony only takes minutes, but its effects last a lifetime. Photo by Random Chief Michael B. 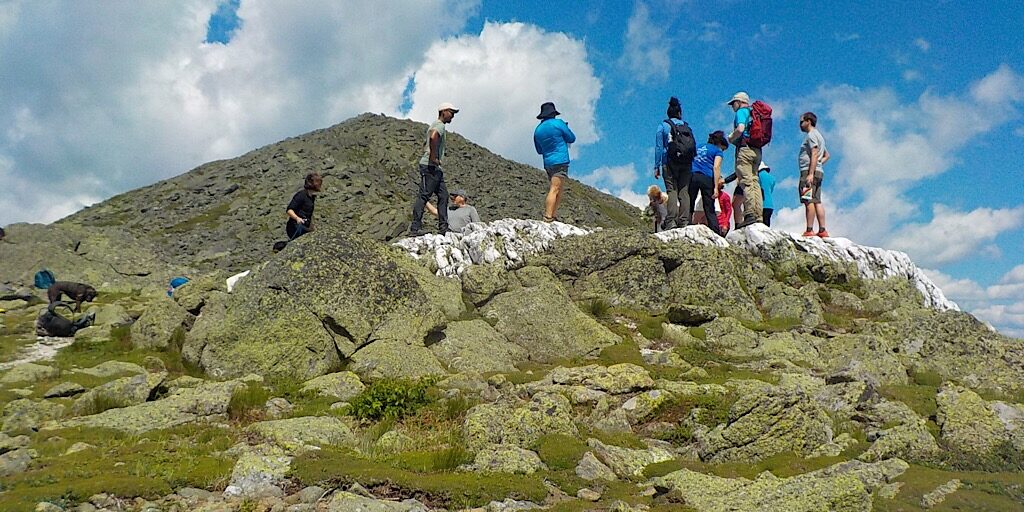 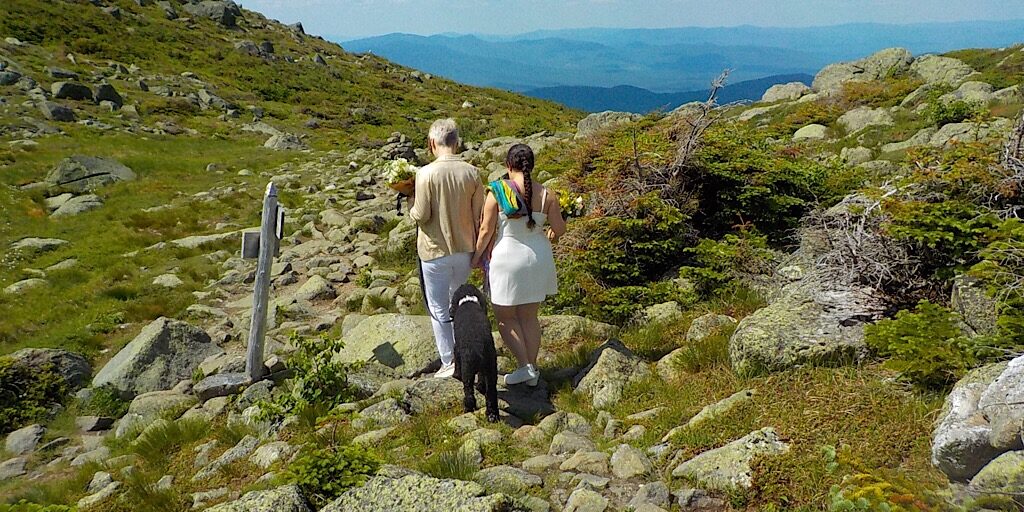 And just like that, this couple is now wedded.