[…] but nature performed the real magic. Nature takes, but nature gives back.

Nature can do surprising things, destructive things. Nature can take away. One day all is right; the next day it is not. Nature can bear its weigh on us in the most unforgiving ways. Then just as suddenly nature can become completely restorative. What nature takes, it often gives back in another form. To make amends, or perhaps just to please herself. Who knows? The rain, as we know, is often followed by a rainbow. Sure, we know the science — the reflection, refraction, and dispersion of light — but we don’t ask why. Nobody was asking why on this recent backpacking trip, either, just hoping for the cure, so to speak.

Redline Guides Ryan Mcguire and Katie Vaughan were leading an east coast family of three on this private trip. The adventure was for all of them, quality time in the White Mountain National Forest, but it was especially for their adult son. He experienced a darker side of nature back in California and was recovering from the event. He needed this trip, and his parents wanted it for him. Our job was to deliver. We did.

Day One: Hiking In

Based on information gathered prior to the backpacking trip we supported the idea of base-camping at a single location, branching out with day hikes. Specifically chosen was Ethan Pond so they could take over one of the tent platforms and we could offer our guests a privy. They wanted to backpack, but weren’t necessarily looking for a full-on immersion in the back country. No jungle warfare. We figured this would provide a rich experience, and Ryan and Katie were eager to show them some of their favorite places.

Day one also involved a little trail running on the side. Ryan ran back to the car for some needed medications, and the family’s son ran back with him. He was quite fit. Katie stayed at camp with the rest of the family. We don’t usually put on this many guides for a family of three, but on this trip they maximized this ratio by going above and beyond. 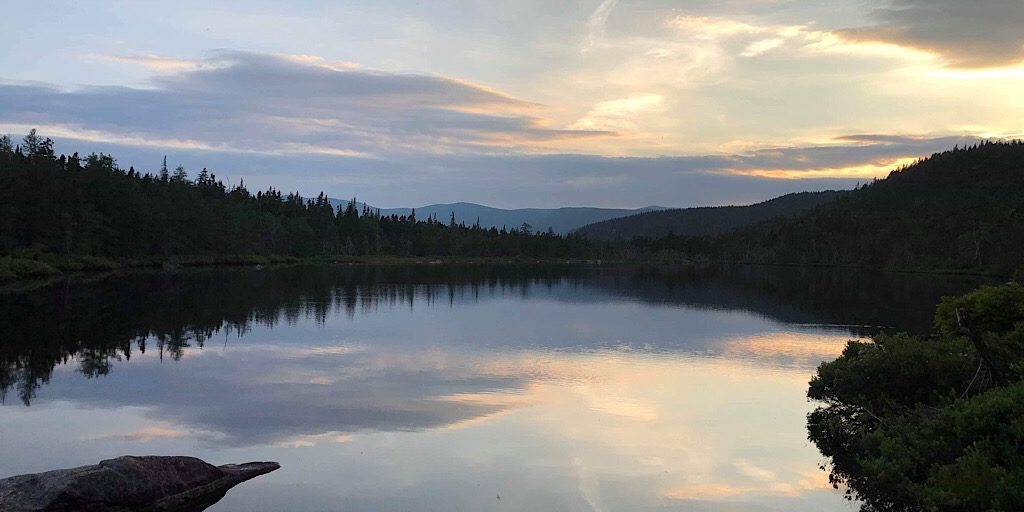 Ethan Pond is one of two “wild trout ponds” in the state of New Hampshire.

After breakfast on the second day the family followed Ethan Pond Trail — which is part of the Appalachian Trail (AT) — stopping at Thoreau Falls. From there they continued on hiking into the amazing Zealand Notch and along the crumbing flank of Whitewall Mountain (3405′). The destination of the day was the AMC’s Zealand Hut. There they had some cookies and enjoyed the falls before reversing direction and returning to Ethan Pond and their home for the night.

For the son’s sake, Ryan took him up the Whitewall Slide while Katie led the rest of the family back to camp. While this slide is steep and unstable, for the son it was awesome. A needed thing. It was one of nature’s consolation prizes. The exertion of getting up there, the breathtaking views, it all formed a curative mix. In fact, he told us he wants more. High up the slide the pair rested, taking in the views. Katie was in contact with Ryan over two-way radios in case either party ran into trouble. Smart. 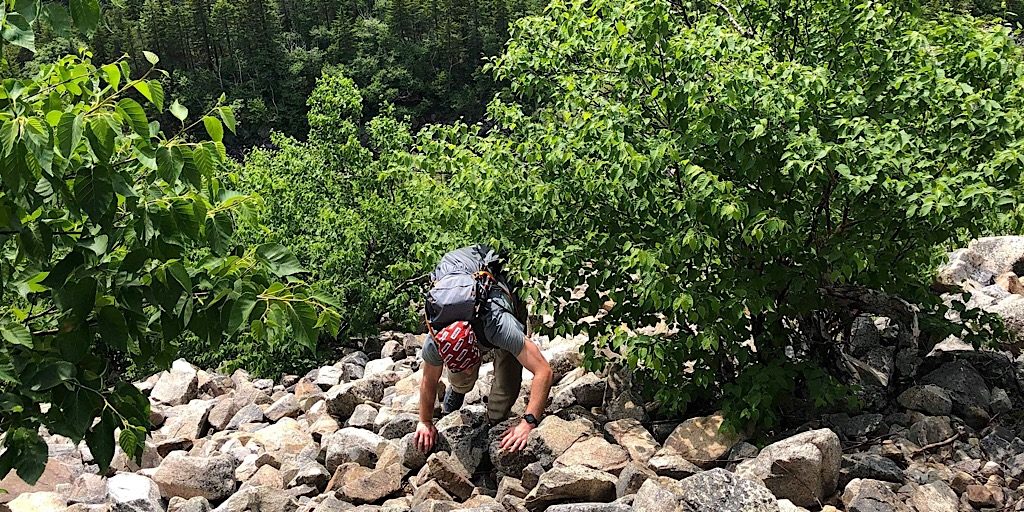 Climbing the slide was fun… and more than that.

Mt Willey (4285′) is one of New Hampshire’s 4000-footers and while it doesn’t offer 360° views, it does offer sweeping, one-of-a-kind vistas. Being it was such a hot day, seeking higher ground was a good move. It’s a tough hike with steep eroded sections and ladders, but it was a good way to spend the day. After the hike they again made their way back to camp. The following day they would leave so they enjoyed one final dinner in camp. 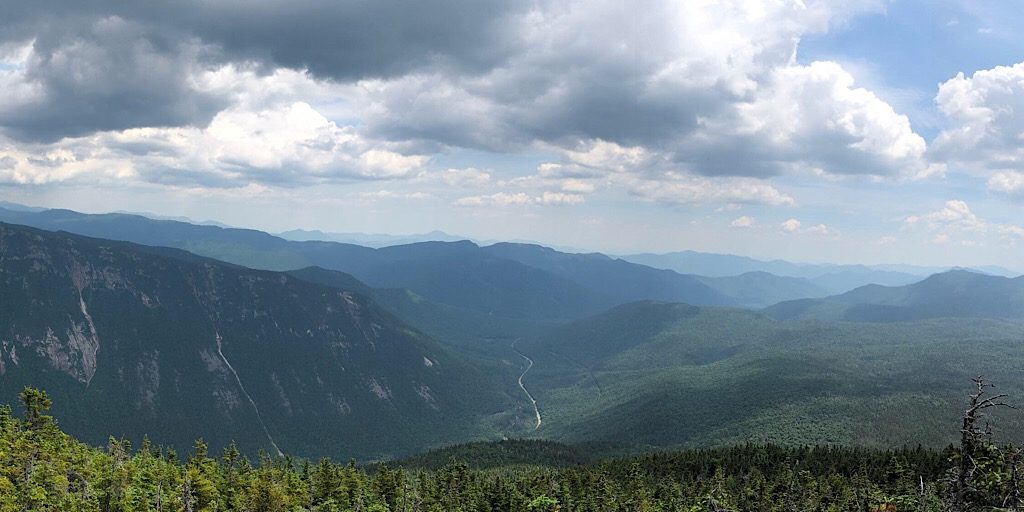 The spectacular view from Mount Willey.

The weather had cooperated so far, but they ended up getting rained on pretty hard through the night, but it thankfully stopped by morning (nature’s give and take). When they awoke folks were scrambling to leave so our team followed suit. It began with a teen group discovering a spider in their tent at 4:45am, the rest just happened naturally. Moreover, the family had a long drive to get back home.

All ended well, the whole family was very pleased with the trip and for the son it was extra special. He is headed in the right direction. We moved him that way with the help of Ryan and Katie, his parents certainly did their part, too, but nature performed the real magic. Nature takes, but nature gives back. 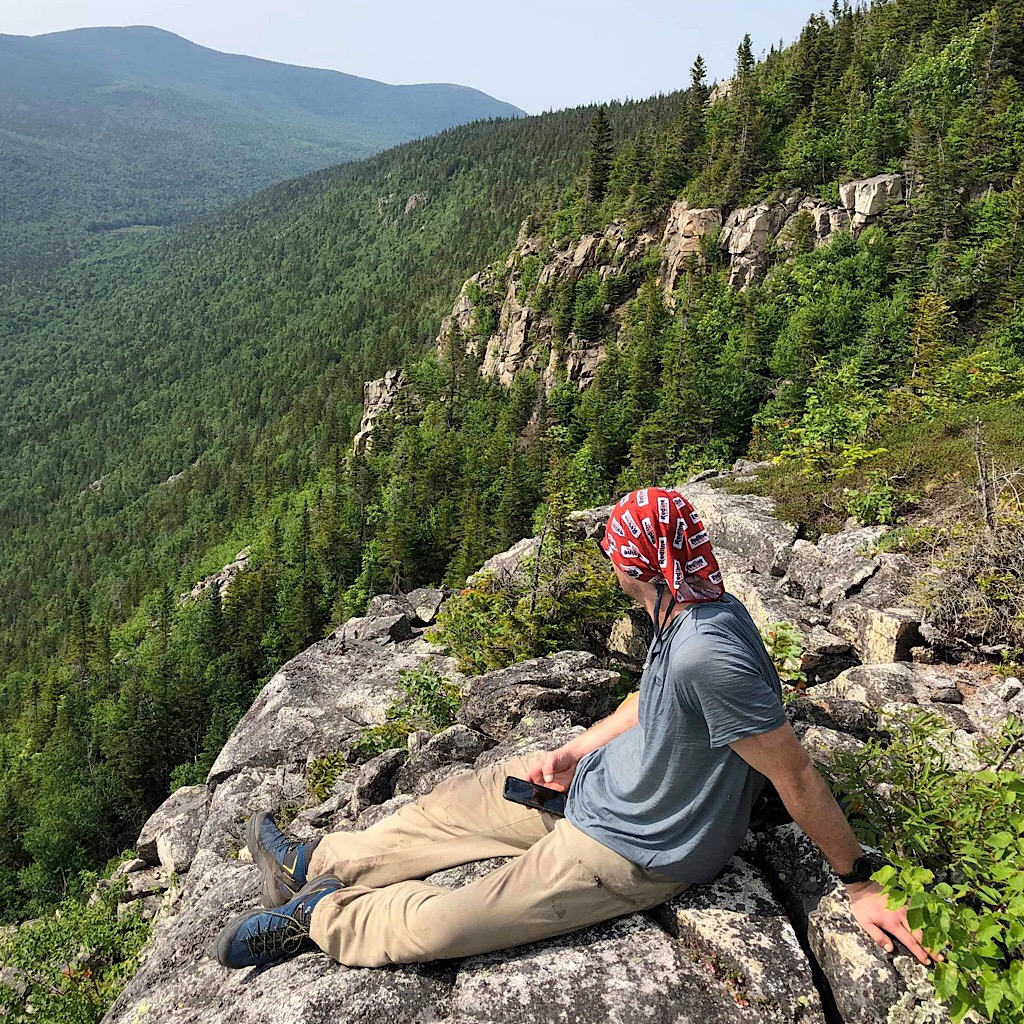 Looking back at day two. This moment in time. This gift from nature.

Great lead, Ryan and Katie — awesome job everyone. Thanks for choosing Redline Guiding.