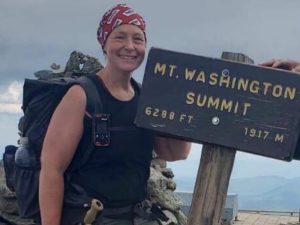 Backpacking in the alpine zone of the Presidential Range is difficult. In winter you can camp anywhere outside of the Cutler River Drainage in that zone as long as there is two feet of snow under you so space is plentiful. In winter, however, there are cold temps and often high winds so camping is not necessarily easy or even fun on some days. This isn’t even taking the frequent navigational challenges into consideration.

It doesn’t get much better during the rest of the year, though. Camping is pretty restricted limiting backpackers to established sites only: Nauman or Valley Way tentsites, Hermit Lakes Shelters, the pricey Appalachian Mountain Club’s (AMC) huts, and the Randolph Mountain Club’s (RMC) offerings in the Northern Presidentials and most — aside from the AMC huts — are far enough below treeline to make their utilization somewhat impractical.

When our guest, a fellow from New York, NY, asked to be guided for a two-day “Classic Presidential Traverse” — hiking Mts Madison through Mt Pierce covering a number of N.H. four-thousand-footers — we opted to utilize the RMC’s structures, namely Gray Knob. First of all the call came without much notice so AMC hut resevations weren’t even possible. Second, the price for the RMC huts is a lot less. Bear in mind they’re less service-oriented, in other words you need your own sleeping bag, pillow/puffy, meals, stove and fuel, and water filter, but for many that is preferred.

On day one our team, led by Redline Guide Arlette Laan, began their ascent to the ridge via the Daniel Webster Scout Trail on the east side of Mt Madison efficiently grabbing that first peak. From there they snagged Mt Adams before dropping down to the RMC’s Gray Knob cabin as per their plan. There they spent the night in relative comfort. Arlette posted online a photo of herself (see below) on the Quay above Gray Knob taking in the sunset. Pretty epic.

On day two they got up early and made the big push to finish their “Classic” traverse. They headed directly toward Edmand’s Col and Mt Jefferson. From there they naturally ascended Mts Clay then Washington… in good weather, thankfully. After Mt Washington there was still a ways to go, but it’s easier in the south and mentally it seems to feel mostly downhill. It’s not, but it will seem that way all in all. In the southern end they snagged Mts Monroe, Little Monroe, Franklin, Eisenhower, then finally Mt Pierce for the finish. From there they finally dropped below treeline and toward route 302 and the end of their sizable day. Arlette grabbed a few photos of their trip. Due to privacy restrictions we cannot post identifying photos of our guest, but here’s some of Arlette and the scenery. 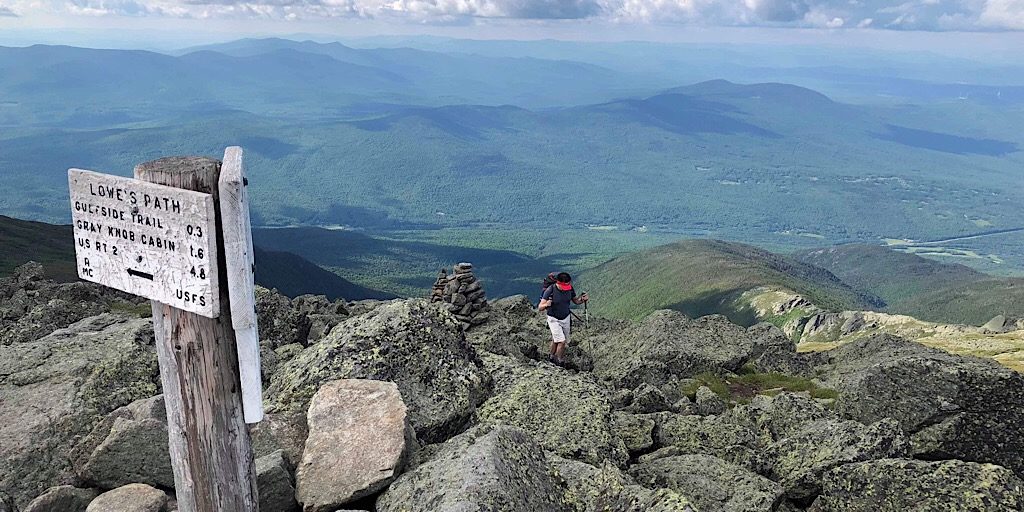 Madison is done, and Adams is about to be. 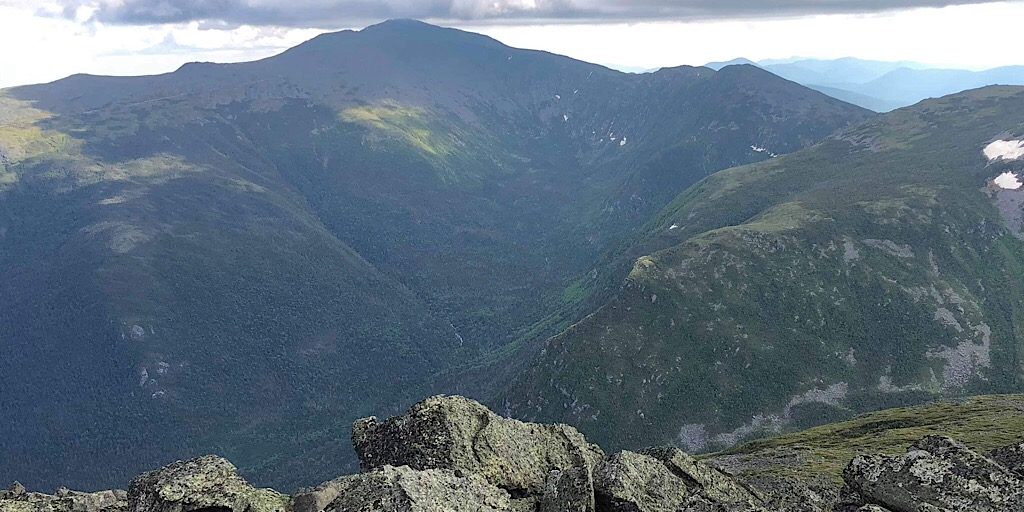 A preview of the following day. 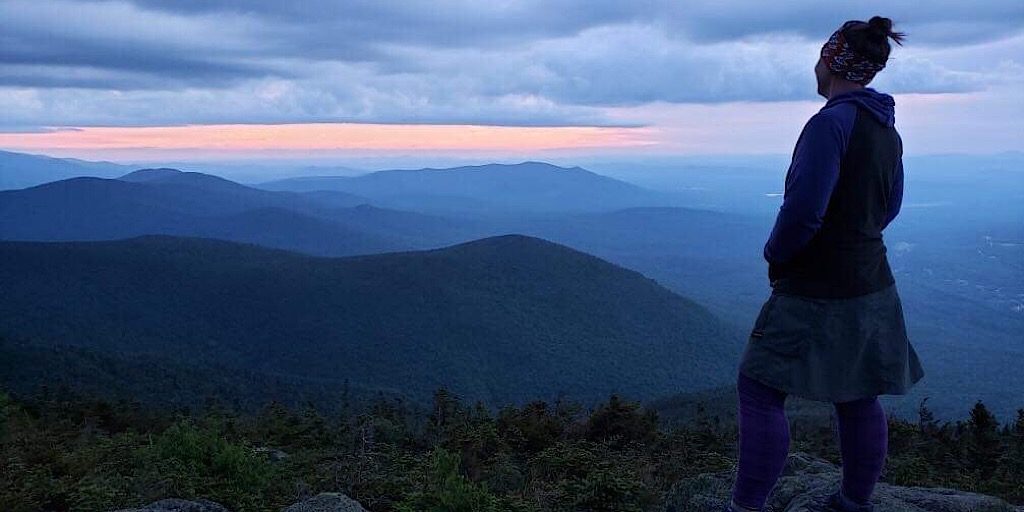 Arlette on the Quay above Gray Knob. Please take note that she is a professional. Do not try this on your own, folks. 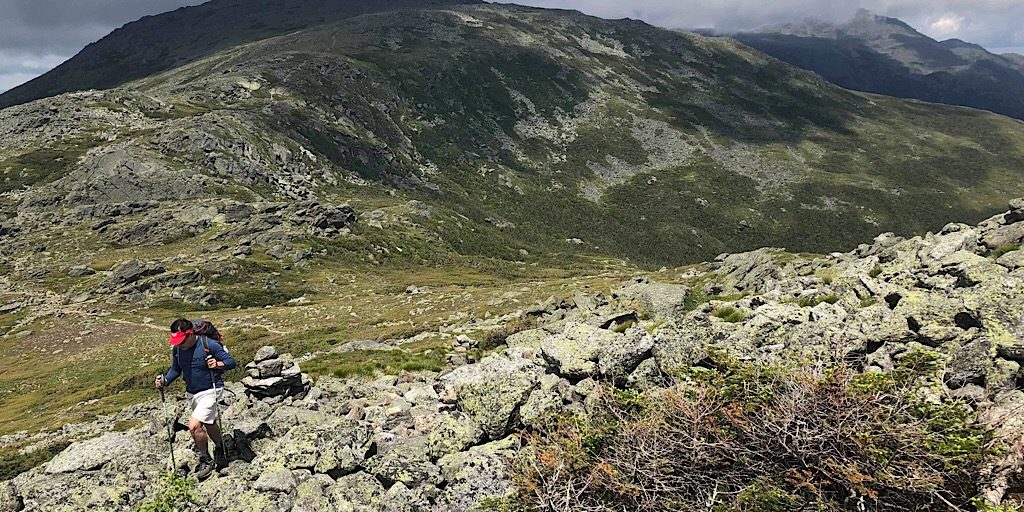 The next day they’re at it again taking Jefferson as their first peak. 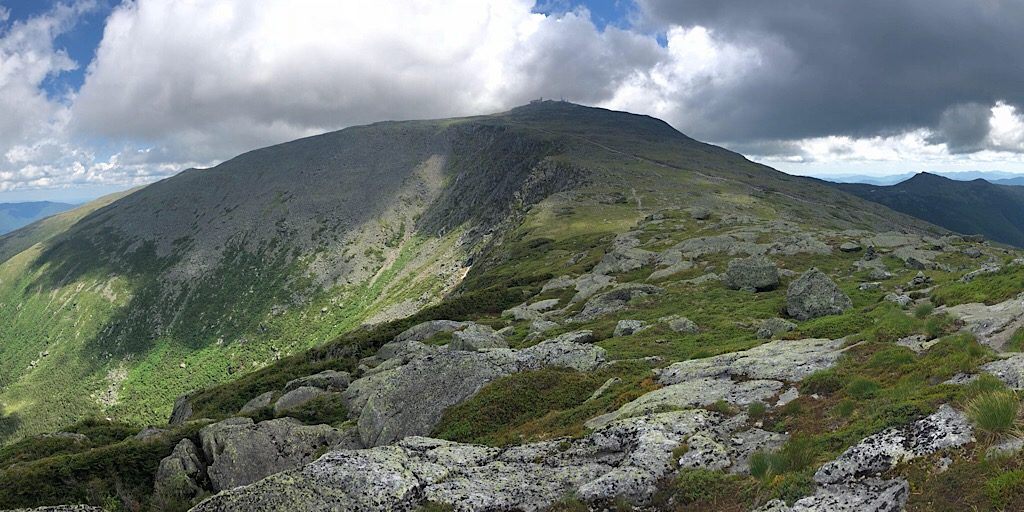 On Clay, Washington in their sights. 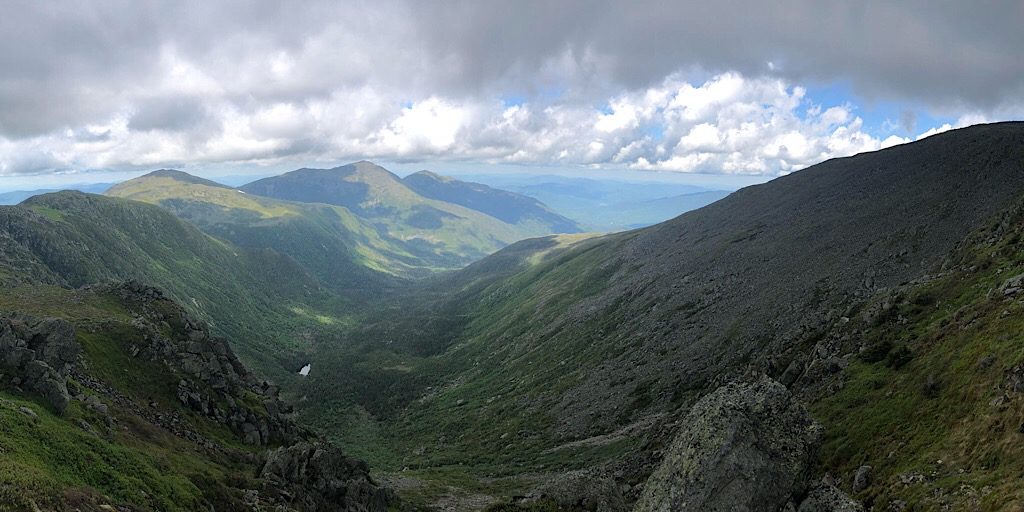 The Great Gulf (note Spaulding Lake down there). 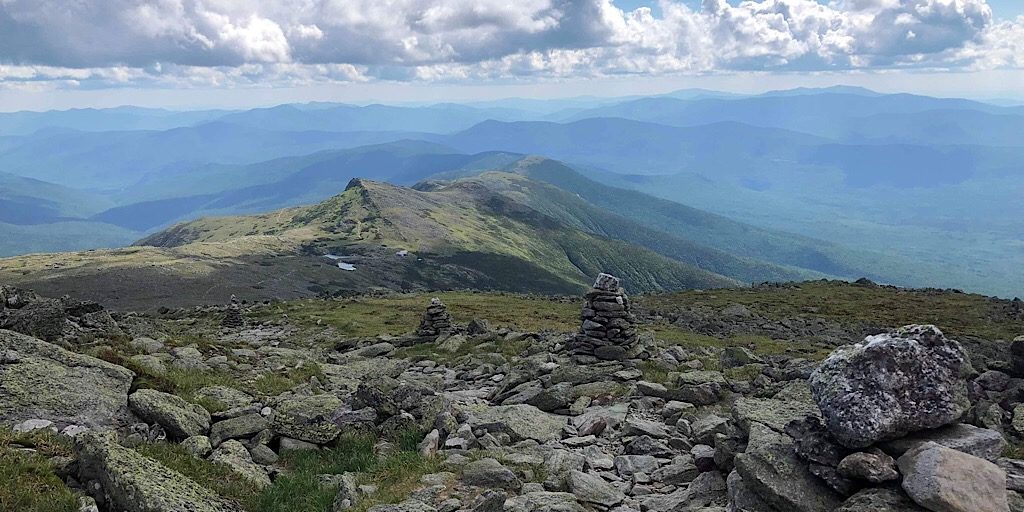 From Washington looking ahead to Mt Monroe and the rest of the Southern Presidentials. 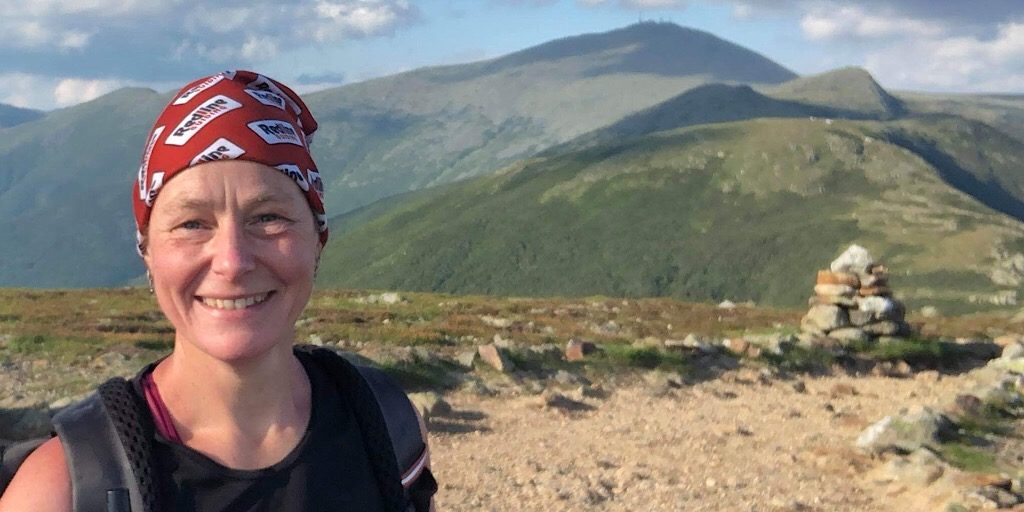 Not sure, but that could be pure joy on Arlette’s face. That was fun so far. (Nice Buff, by the way.) 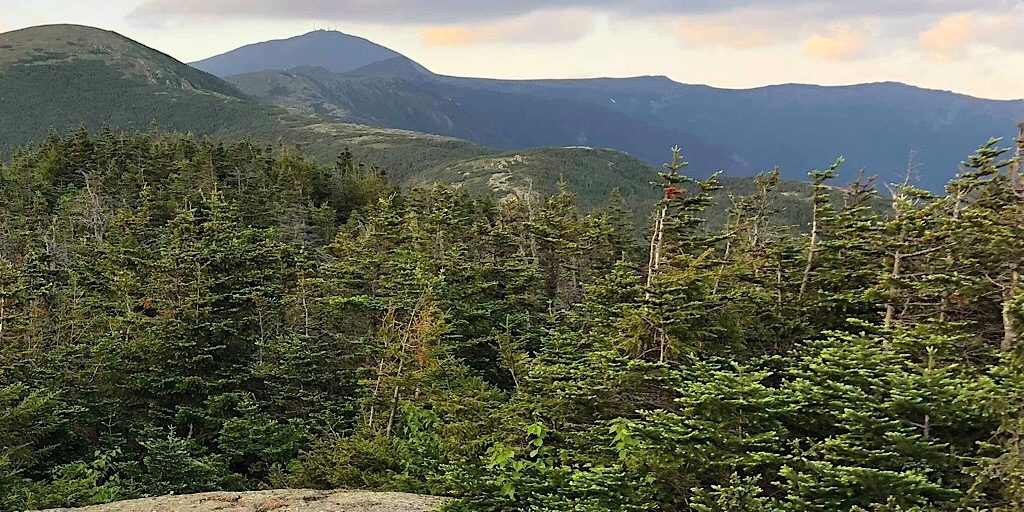 Progress is being made in the south. 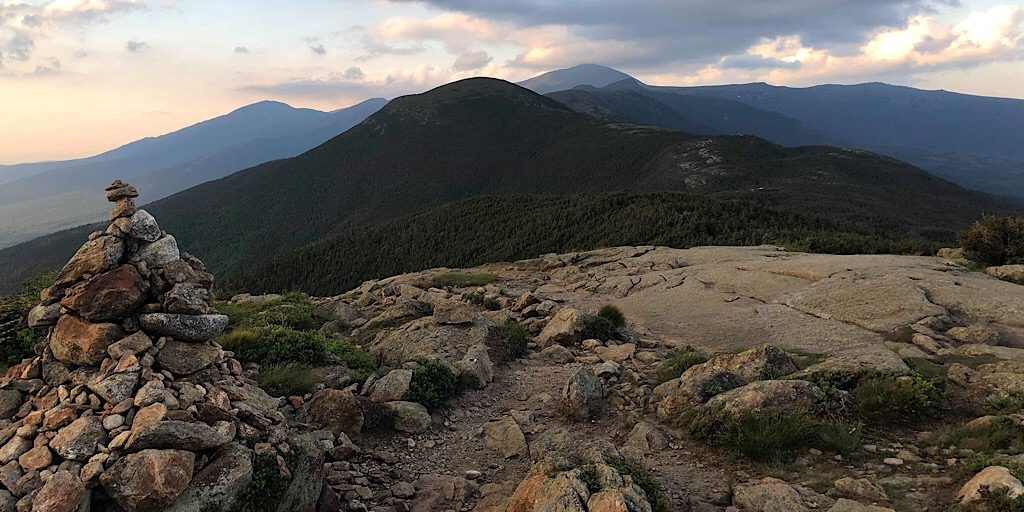 From Pierce looking back. Now they only have the exit out.

Excellent lead, Arlette! And to the whole team, great job! Thank you for choosing Redline Guiding.