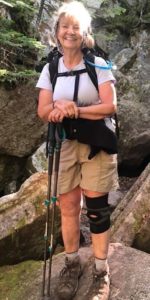 Her trailname is “Bear Repellent” and trust us, she’s no wuss. She realized she had 500 miles left on her Appalachian Trail (AT) section hiking effort and decided that finishing what she started was something that needed to be done. Having randomly joined others for their section hikes in the past, she didn’t really plan out her own sections. Thus, years later — at seventy-one years of age — she found herself with some of the toughest sections remaining. Without capable hiking friends to join her, and not being used to the terrain, she decided to hire a guide. She called Redline Guiding.

It wasn’t always easy for her, nor for Redline Guides Arlette Laan and Ryan Mcguire who led her on a couple of sections. With us she was able to finally complete the notoriously rough Mahoosuc Range — she needed from Route 2 in Gorham to Carlo Col. This she did with Arlette and her sweet trailside demeanor, offering encouragement and patience as needed. She also needed Wildcat Ridge and the Carter-Moriah Range. For these she was led and encouraged by Ryan. She loved them both.

They traveled five to six miles a day northbound in the Mahoosucs — that’s where things began — intentionally keeping things short and manageable going from tentsite to tentsite. This was until the end when Bear Repellent decided to go for it and hike all the way out Carlo Col Trail instead of spending the final night at camp allowing for a more rested exit the following morning. Arlette agreed to it, but in hindsight that day ended up being more than what was ideal. Nonetheless they killed it. Since she had already hiked from Carlo Col north, those pesky Mahoosucs were done! 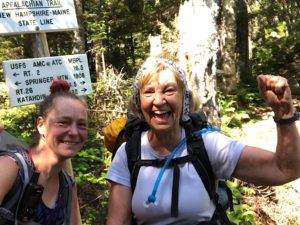 Arlette and Bear Repellent in the Mahoosucs.

Next up, after two restful “zero” days in Gorham, Bear Repellent was ready to get back after at. This time Arlette would be cheering with us from the sidelines while Ryan stepped into the action. He was ready to lead our guest into the ascent of a ridge which had clearly captured her imagination. The Wildcat Ridge Trail has some open scrambles with a bit of exposure. It has a rep. Bear Repellent had heard all about it and was less than enthused to take it on. To help, she sent her pack up on the gondola so the weight which might throw her off balance was out of the picture. It worked. Ryan inspired confidence, encouraged her, helped her manage the fear, and they got it done. From Pinkham Notch to Carter Notch, done.

Then came the rains. It didn’t last. The storm came then it went and eventually the sun took over and it turned into a nice day, albeit very hot and humid. That’s where the plan began to unravel. The rain was okay, the sun, heat, and humidity, coupled with that first-thing-in-morning climb up to Carter Dome via the Carter-Moriah Trail, however, killed her momentum. They weren’t out there to break FKTs (fastest known times), but the pace began to slow, she “wasn’t feelin’ it,” to the point that making Imp Campsite — their next planned stop — wasn’t going to be possible. Not only did they need to get there early enough to secure their place for the night, they needed to do it safely. In daylight. This didn’t seem possible. At Zeta Pass the team decided to retreat down 19 Mile Brook Trail. Mike met them at the trailhead to give the team a ride back to Ryan’s vehicle parked at Pinkham Notch. As Mike hugged Bear Repellent she exclaimed that she wasn’t a wuss. Mike looked at her with awe, then nodded and smiled. He already knew this fact about her innerly hoping that he would still be ambulatory when he’s 71. 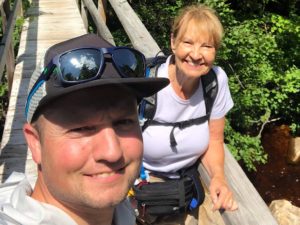 The Carter-Moriah Range will have to wait until next year. Thankfully Bear Repellent won’t be 71 anymore. That should help. She accompanied Ryan to our Basecamp where we would let her crash for the night. Ryan wasn’t going to let her fritter away the final day and planned another section of the AT. Specifically they would do as much of Ethan Pond a Trail as possible (which ended up being from Route 302 to Thoreau Falls and back).

Some people spend their retirement years and their savings on shuffleboard cruises for seniors. Nothing wrong with that, we suppose. Each to their own. Bear Repellent decided that her retirement years would be spent hiking, though, finishing the Appalachian Trail. Honestly, choosing between that over being sedentary, if it’s possible, is the way to go.

Scenes from the Mahoosuc Range… 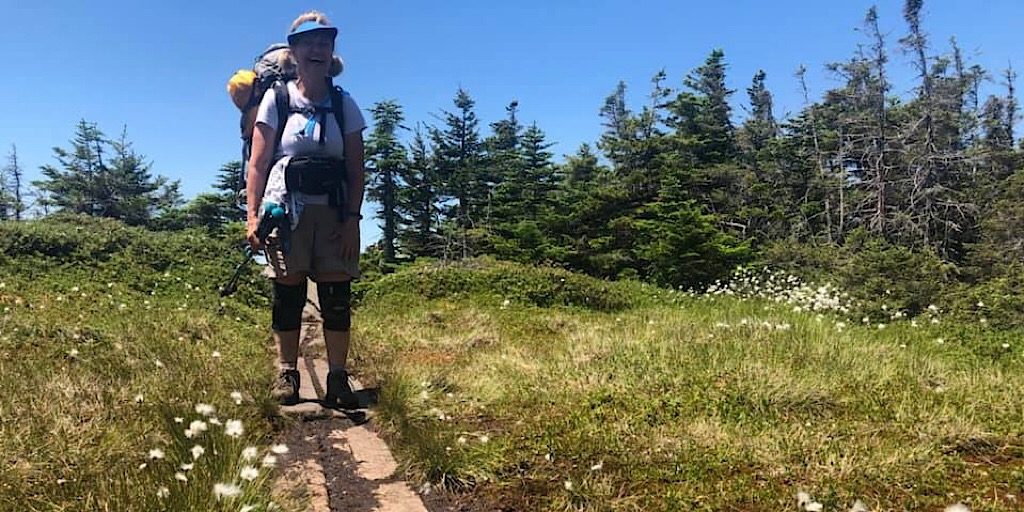 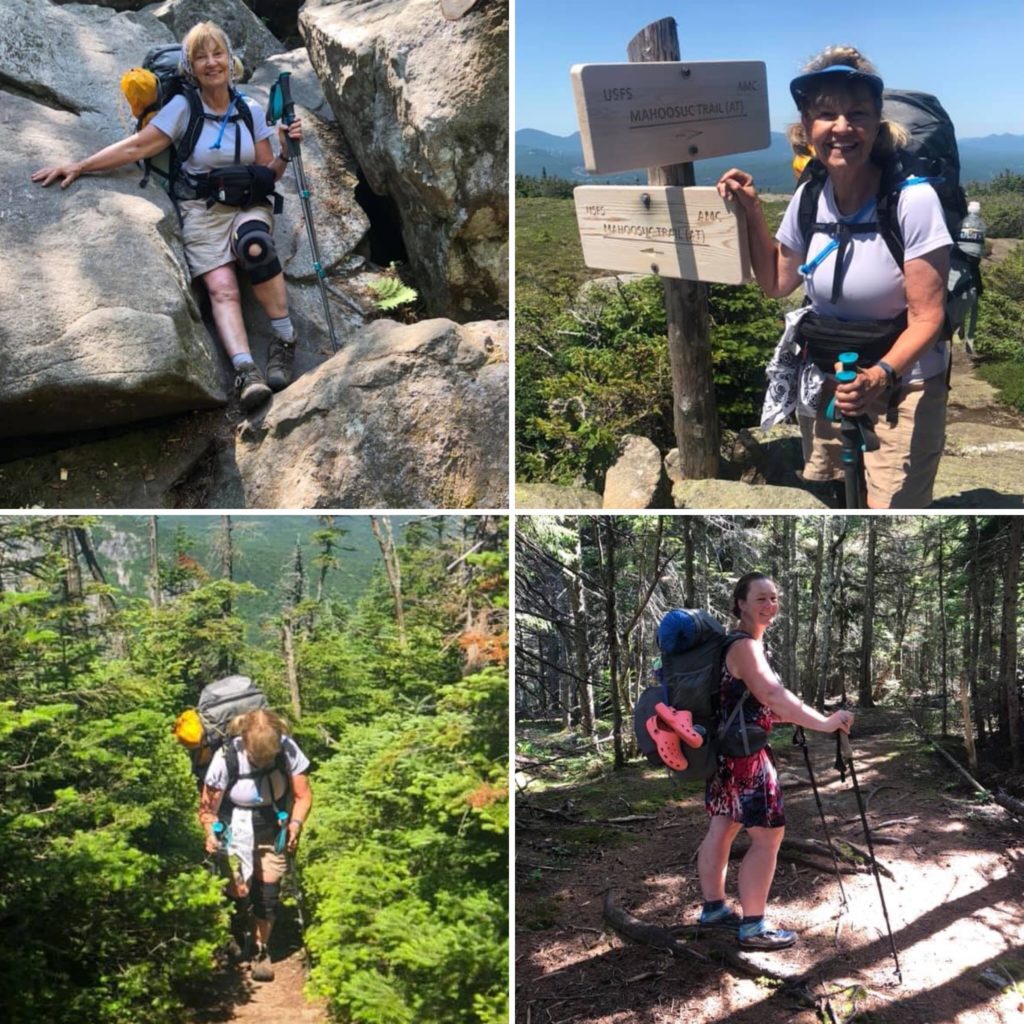 Random scenes from the Mahoosuc Range portion of her experience with us. 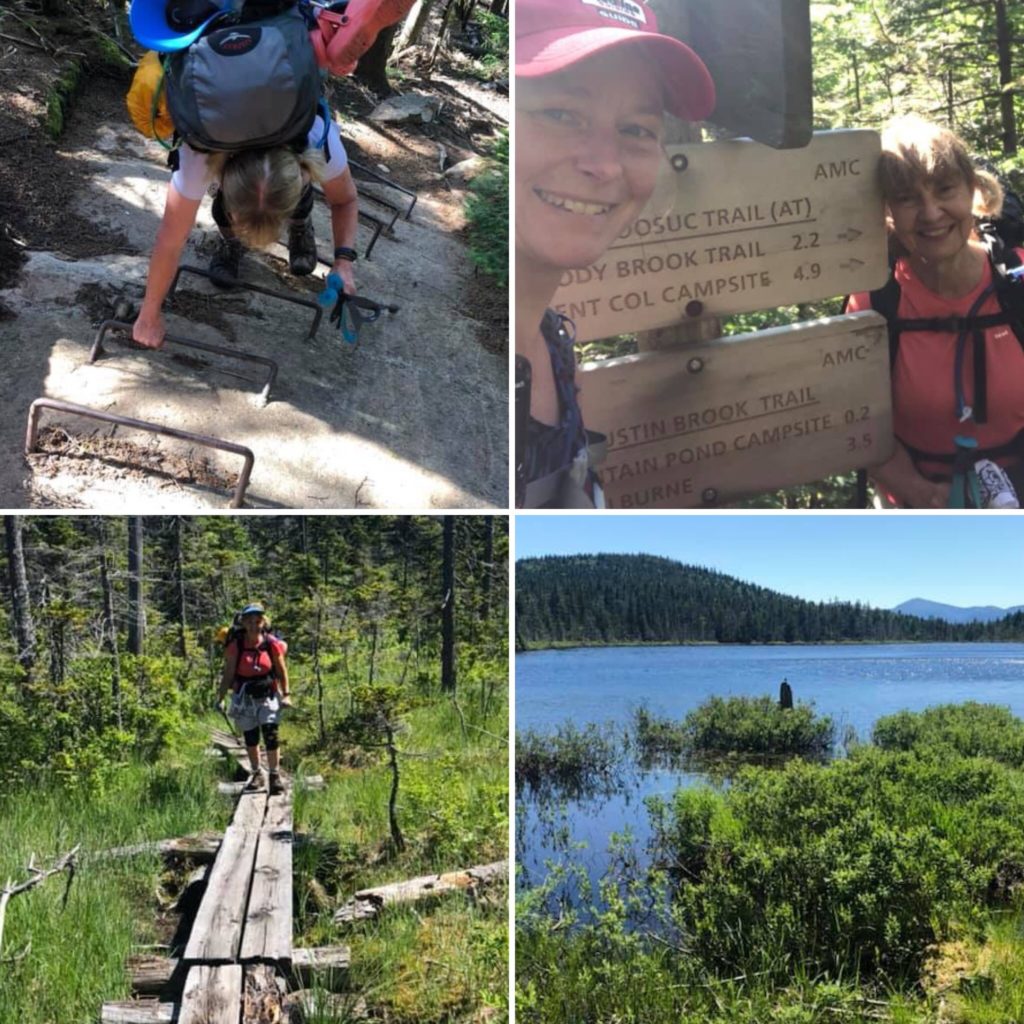 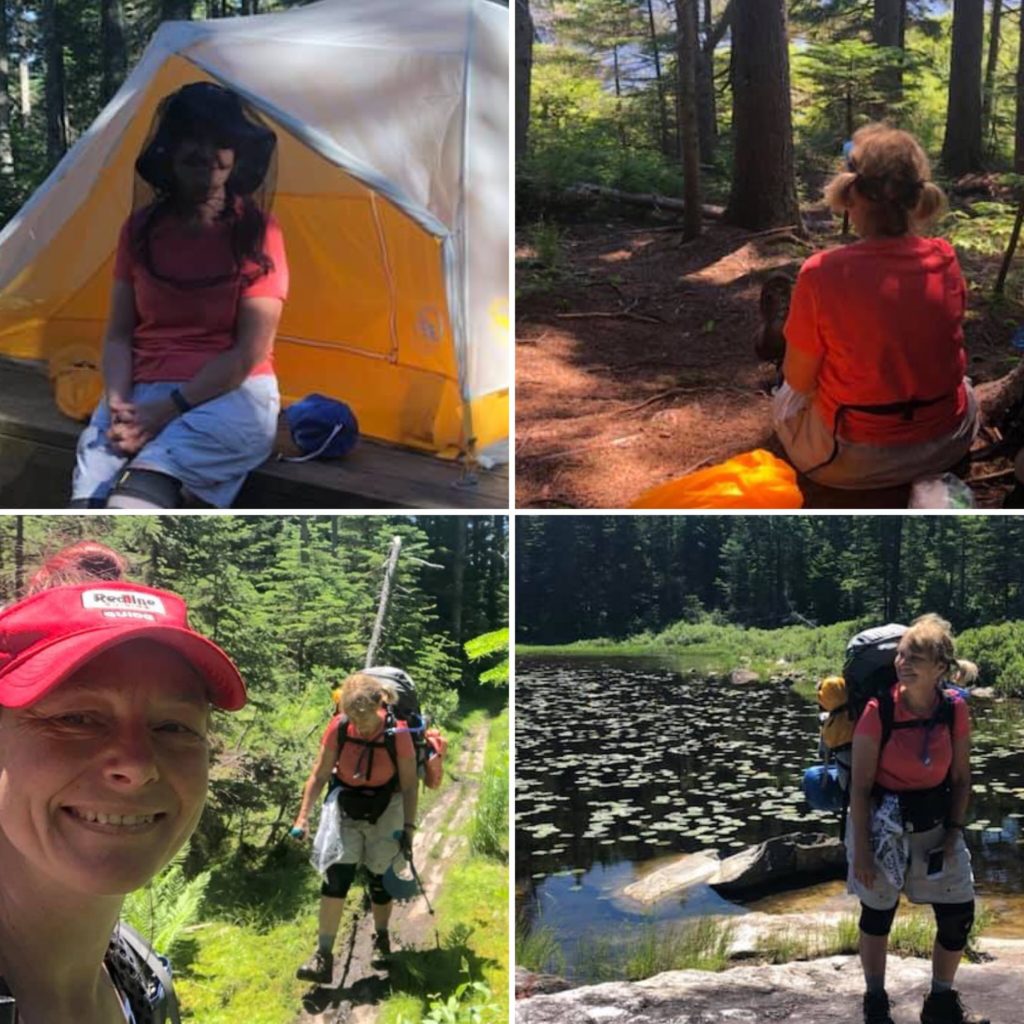 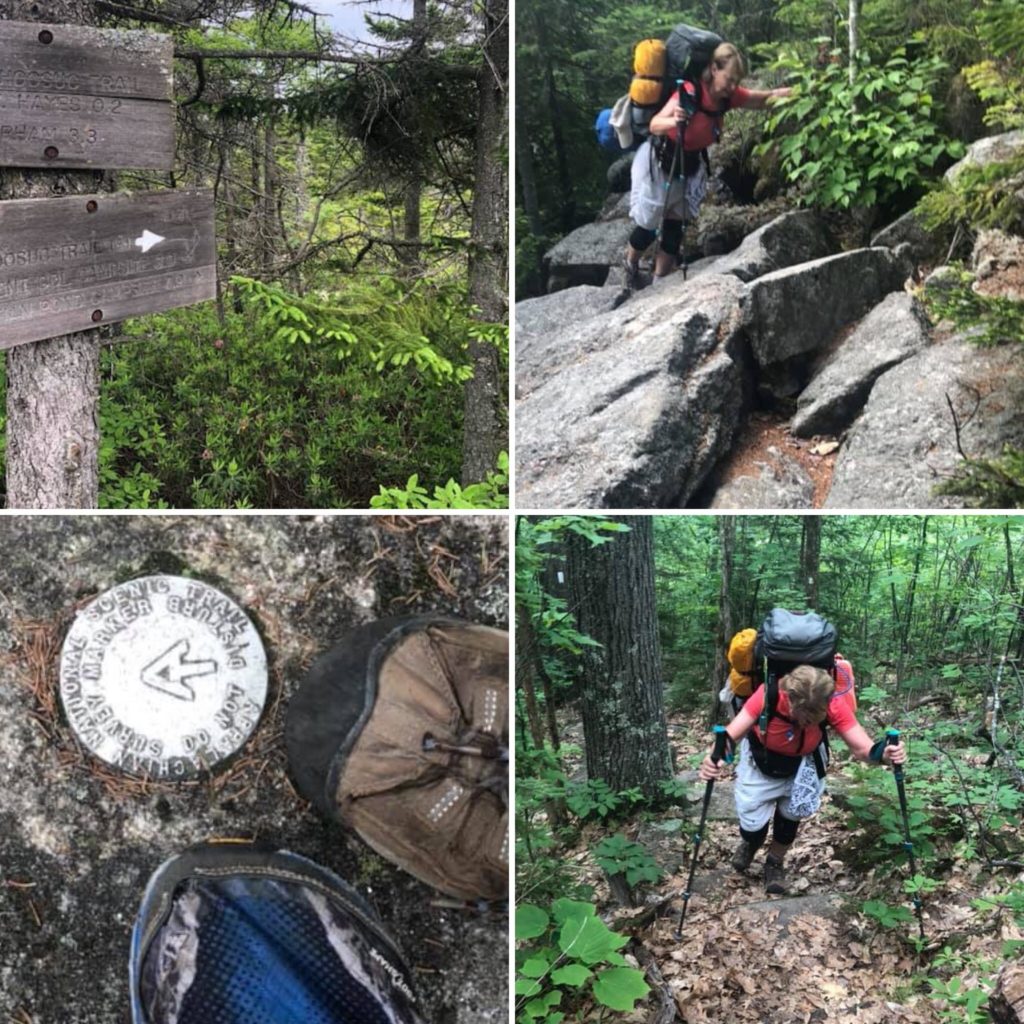 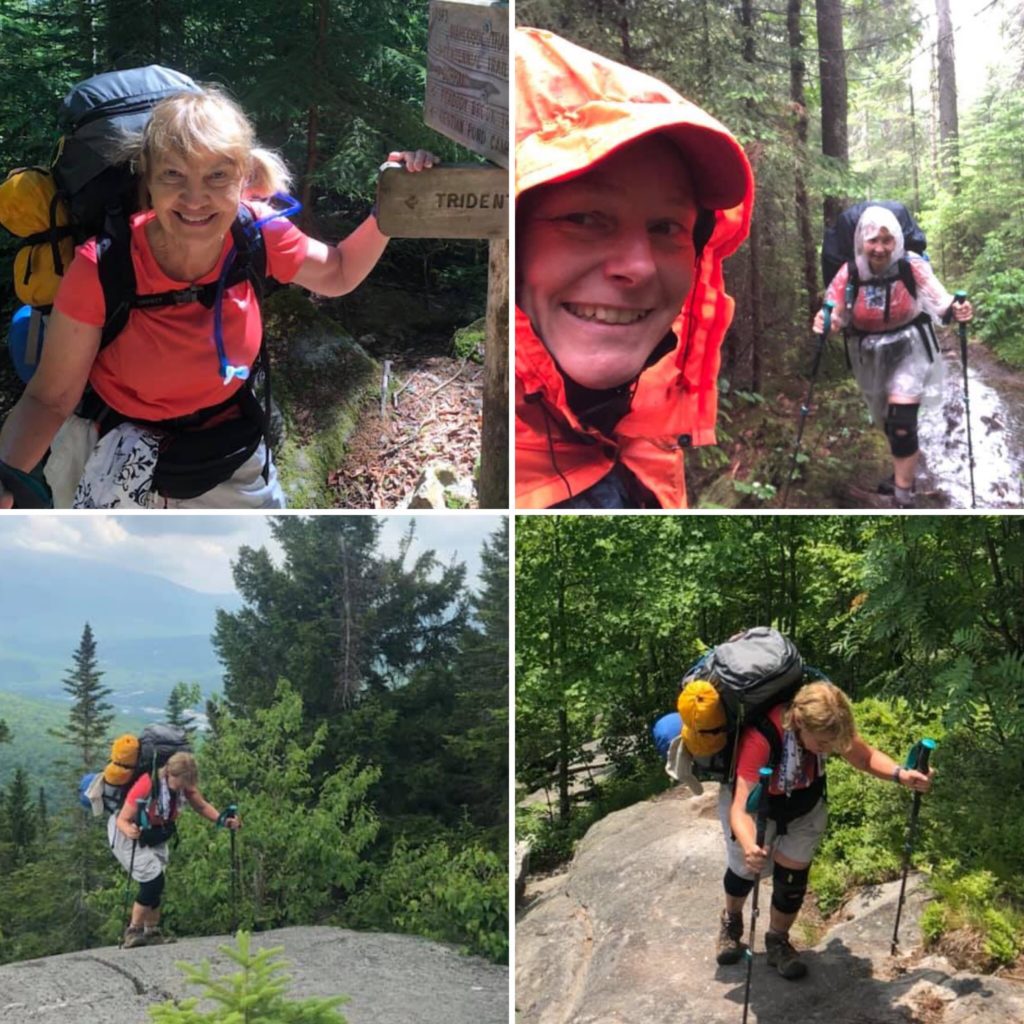 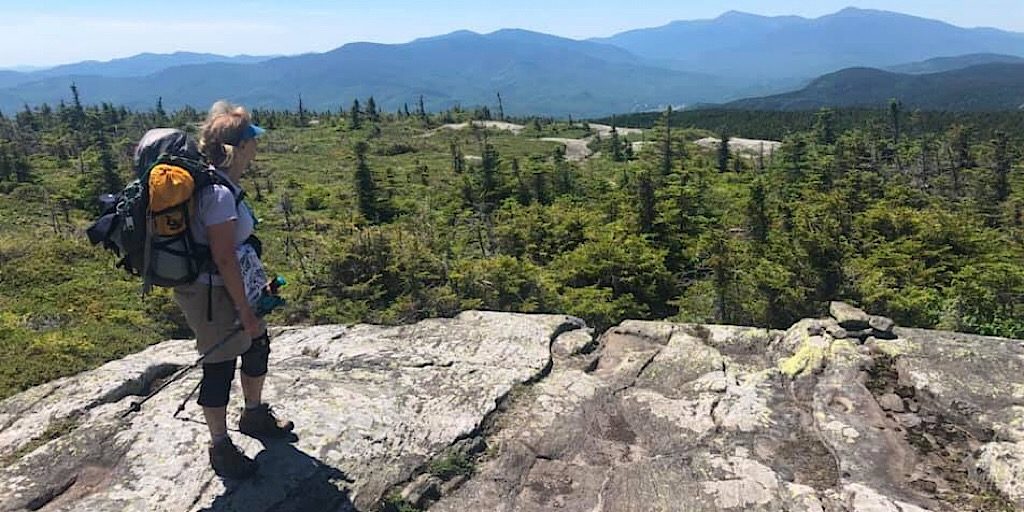 The awe and majesty of the Mahoosuc Range. Breathtaking in more ways than one.

And, yes, there are some post-Mahoosuc photos as well… 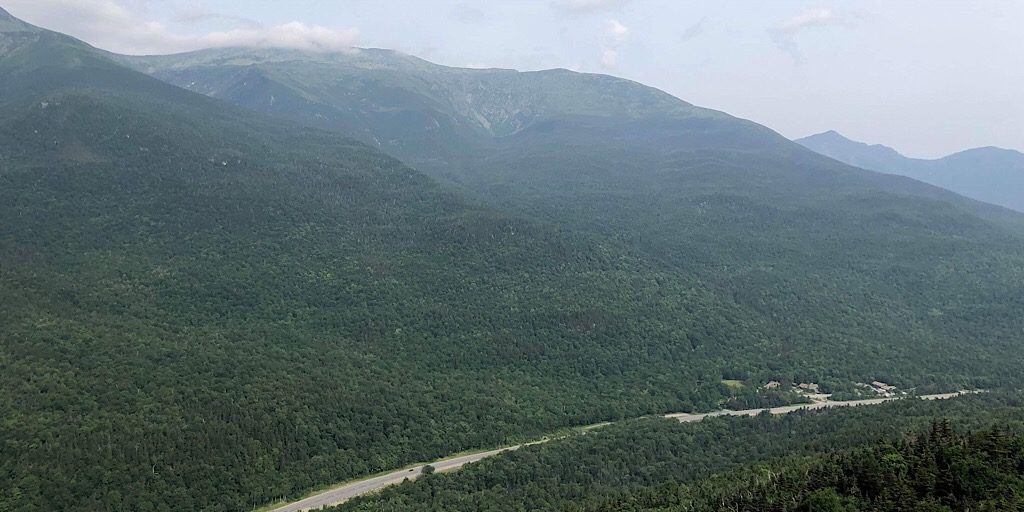 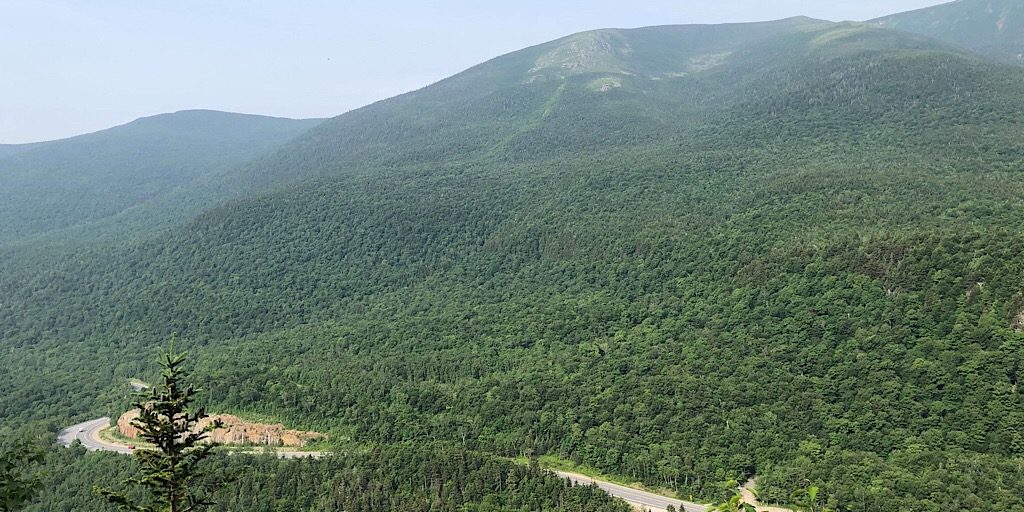 The view from part way up Wildcat Ridge. Here looking southerly out of Pinkham Notch. 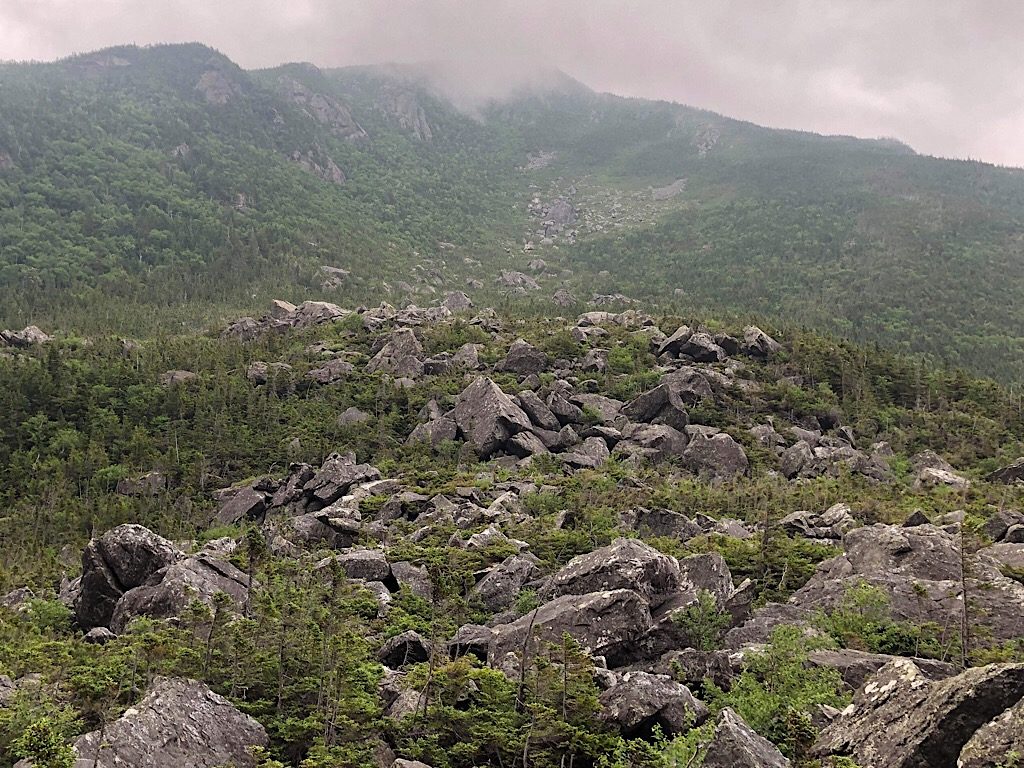 The Rampart chokes Carter Notch, full of talus from the flanks of Carter Dome. Impressive. 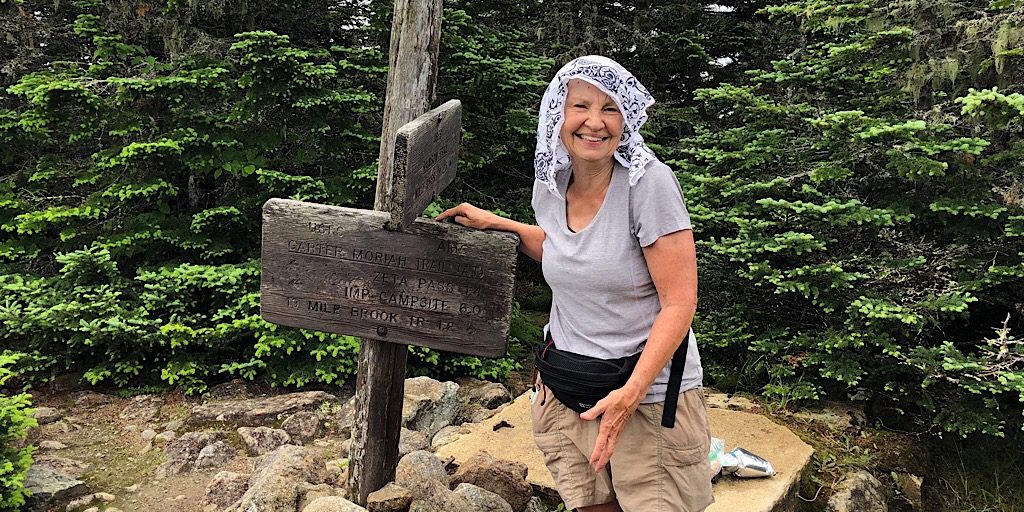 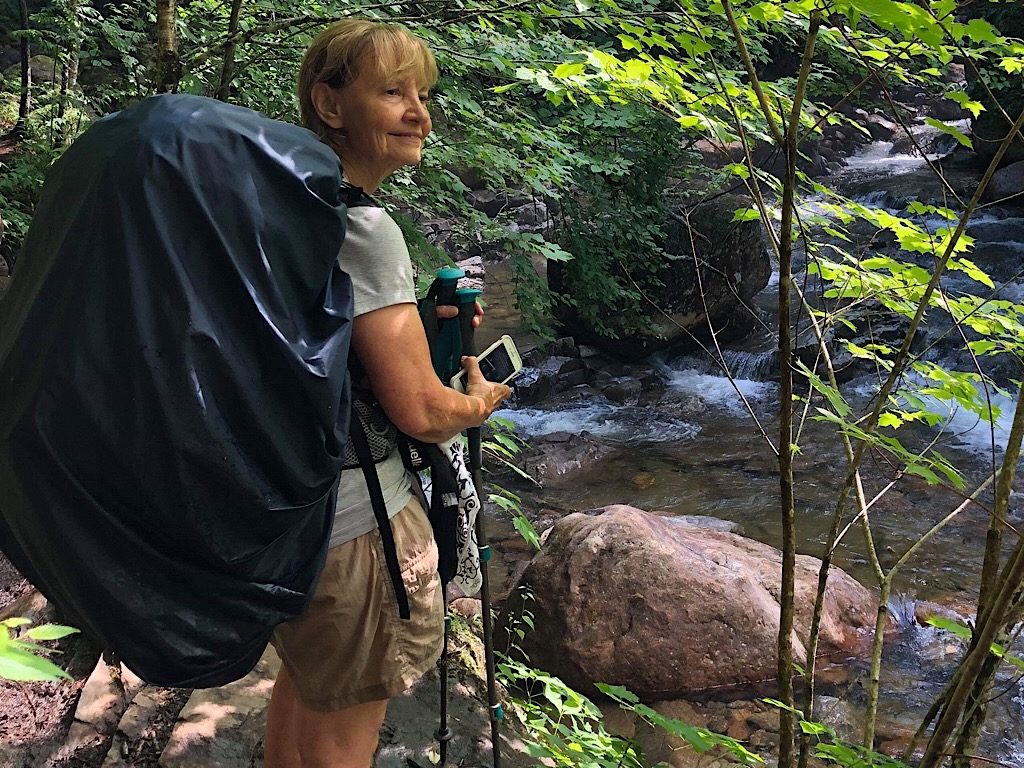 The unexpected exit via 19 Mile Broom Trail. Please note the size of her pack! Definitely not a wuss.

Scenes from the next day… 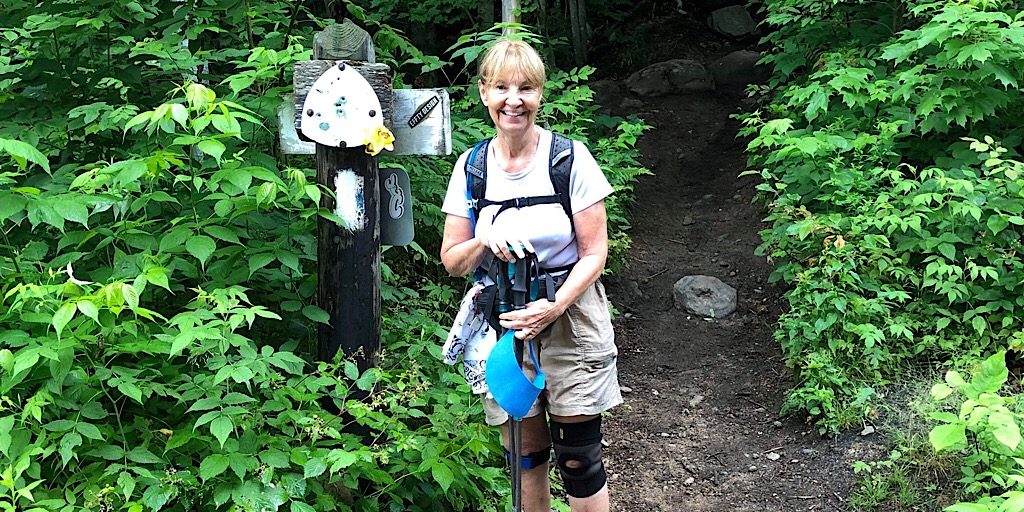 Starting out a new section, the east end of Ethan Pond Trail. 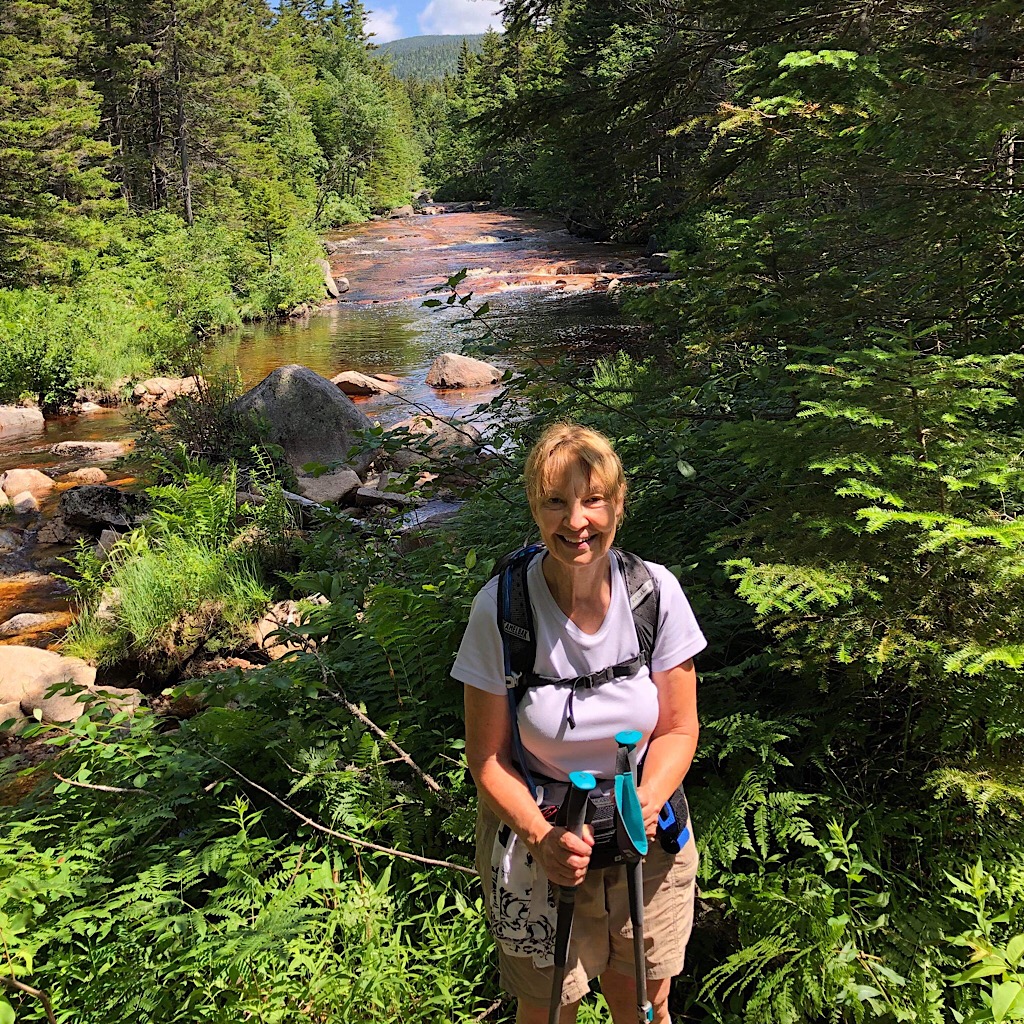 The North Fork of the Pemigewasset River. They make it as far as Thoreau Falls before returning. More AT, done!

Great job, Arlette and Ryan! And Bear Repellent, you are awesome, and not a wuss. Congratulations on what you were able to accomplish during your visit, and thank you for choosing Redline Guiding to help you get it done.