For a number of years he thought about Huntington Ravine, considering. He watched videos on YouTube, planning. He read first-hand accounts, wondering. His senses on overdrive. He got himself good and stoked, and a little nervous. Knowing routing is super important on this notorious White Mountains hike, this crowned jewel of the Terrifying 25 list — so even though his son had hiked it before — he called us to lead. We put Redline Guide Ken Hodges on it. He’s a great choice as he has many Ravine tours under his belt.

The day dawned cool, clear, and beautiful, but Mt Washington (6288′) as usual was shrouded in clouds. By mid- to late-morning, however, things began to warm up. The clouds vanished under the intense sun. The humidity was again on the rise. The bugs said hello. But despite the heat and mugginess, despite the bugs, the team persevered. One step at a time, one awkward move at a time, ledge by ledge. They safely climbed Huntington Ravine. From there, as planned, they made their way across the Alpine Garden and took the Lion Head Trail down.

This story, told another way, arrived by email. It was titled “Huntington Ravine Trip Report.” Barring one minor edit for privacy, it reads as follows — with the author’s blessings — as it read in the email. We love it. Thank you.

I suppose Melville’s point is that obsession is not a good thing. It didn’t end well for Ahab. Even so, hiking the Huntington Ravine Trail had become my obsession. I had become convinced that it was beyond my ability. (I should never have watched this Youtube video.) So, of course, I had to get this white whale. And with the help of Redline Guiding, yesterday I did!

Ken Hodges, my guide on this trip, is truly remarkable. I informed him early in the hike that I am afraid of heights and that this is the thing that simultaneously attracted me to and repealed me from Huntington. Rather than informing me that hiking the HRT is an extremely stupid thing to do given this fact, Ken skillfully acknowledged my fear and said nothing that might worsen it. When we got to the slab I was a bit in awe of what lay before me, but I also felt that I was in good hands and, quite strangely, I was calm, and I am NOT by nature a calm person. (It certainly did not hurt that my 23-year-old son, who had already hiked Huntington and kept insisting that I could do it took a day off from work and accompanied us on the hike. He’s a good kid. That’s gotta be the best gift a son could ever give his dad.) But having Ken there to keep me on the trail (not easy to follow at times), to demonstrate moves and to suggest alternatives appropriate for someone with a 28-inch inseam, and knowing that he had my back and could short rope me or grab me by the pack straps in a pinch provided the necessary reassurance. The fear melted away and the hike became challenging but not frightening. We cleared the chimney and topped out at the Alpine Garden Trail with far less effort than I had ever imagined. The hardest part of the hike was actually the descent via Lion Head, which I had done before.

Now, Mike, I think I have some praise for you, too. As I believe you know, I turned 67 on July 14th. (As you may not know, I’m got a bum left knee and all sorts of crap going on at L5S1. I mean, things hurt!) Now Ken is not as old as I am, but he’s not a heck of a lot younger either. So it might have been genius to assign him to be my guide. Yeah, it might just be that it was his day to guide, but I’m stickin’ with genius.

By the way, I could hardly move today. I wonder how Ken is doing.

Of course our guides don’t work on rotation. Ken was hand-picked. Speaking of Ken, check out these photos he took documenting the trip. Oh, and Ken’s okay… he’s probably out hiking. 🙂 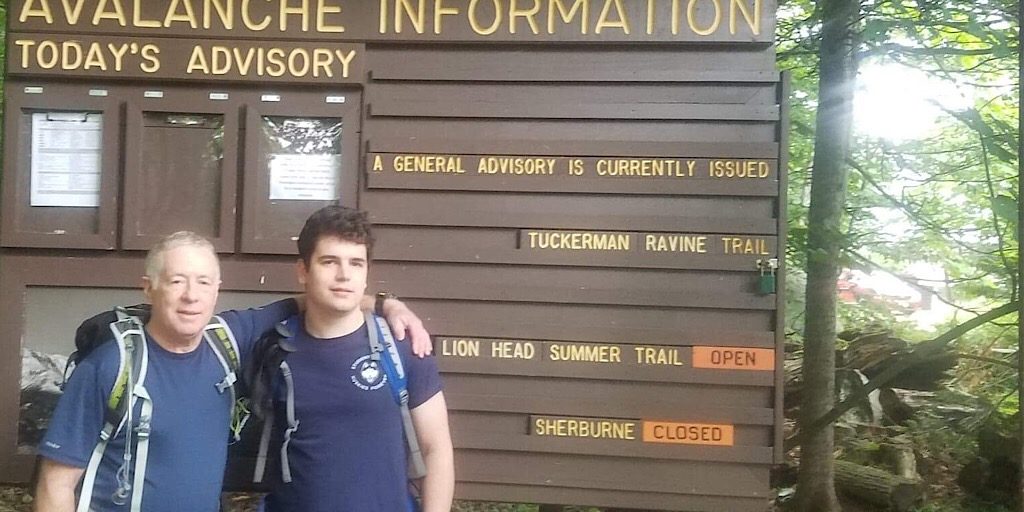 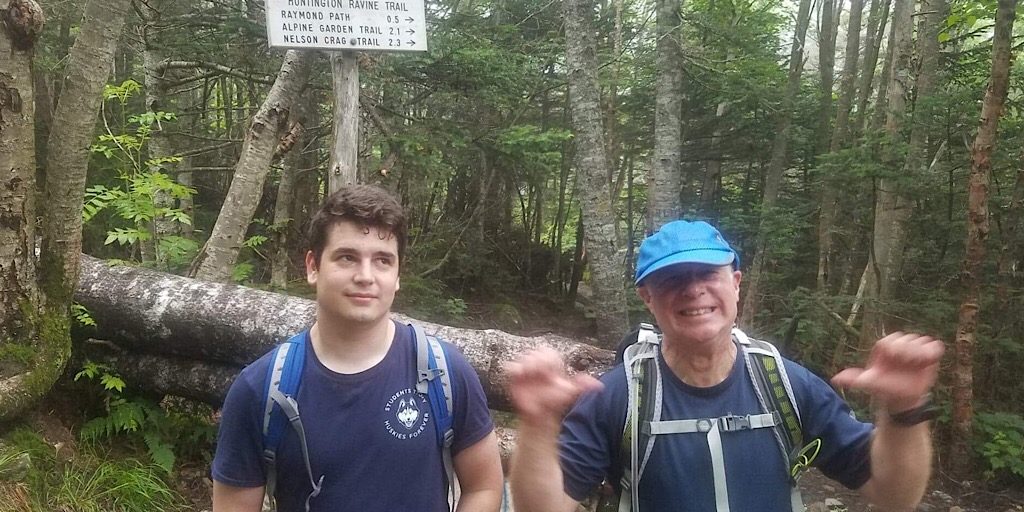 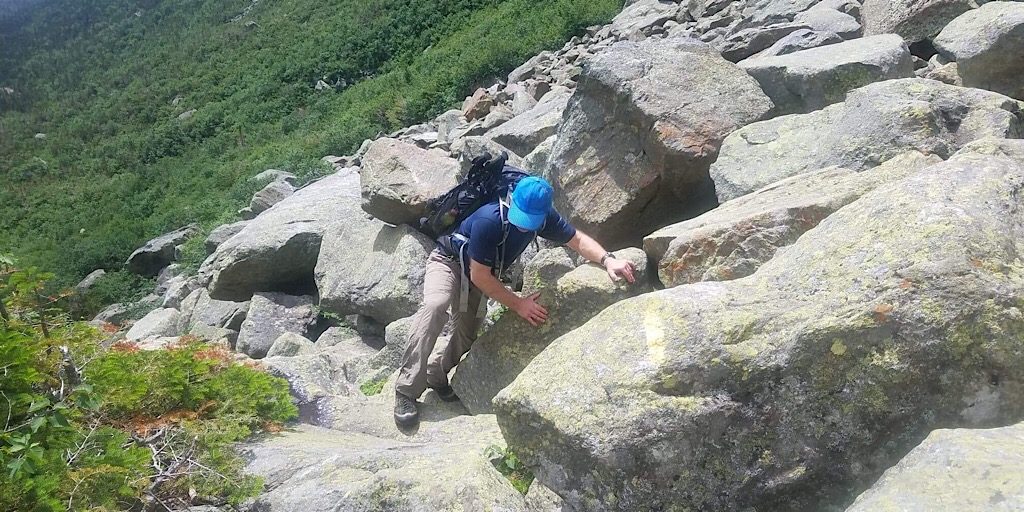 After negotiating some large boulders, “The Fan” gets some attention. 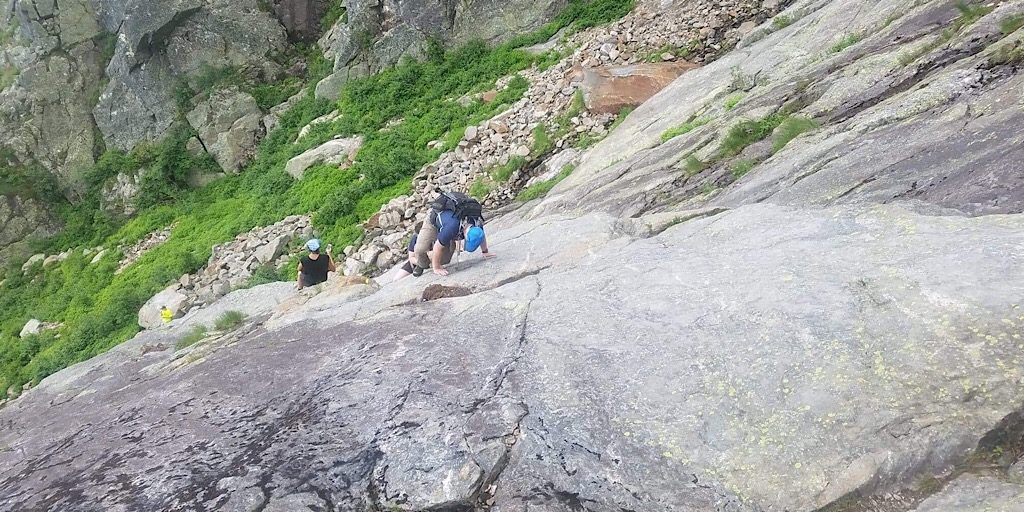 This is where the commitment begins. Backing out after climbing this can be dangerous. 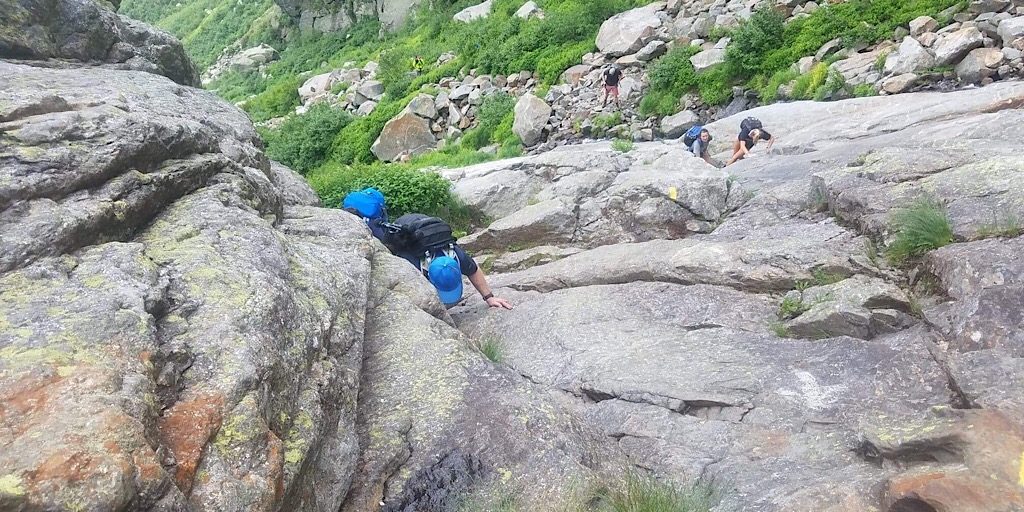 Higher and higher they climb. 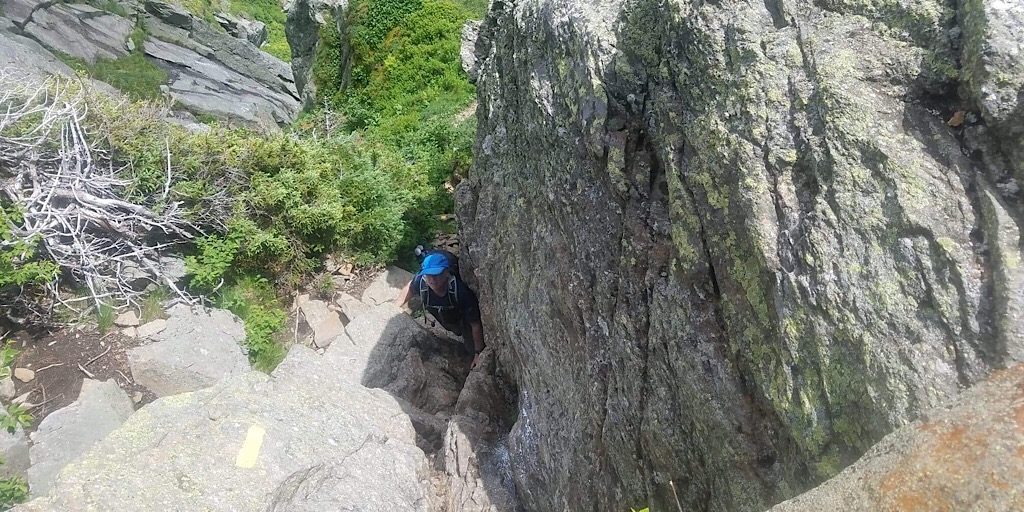 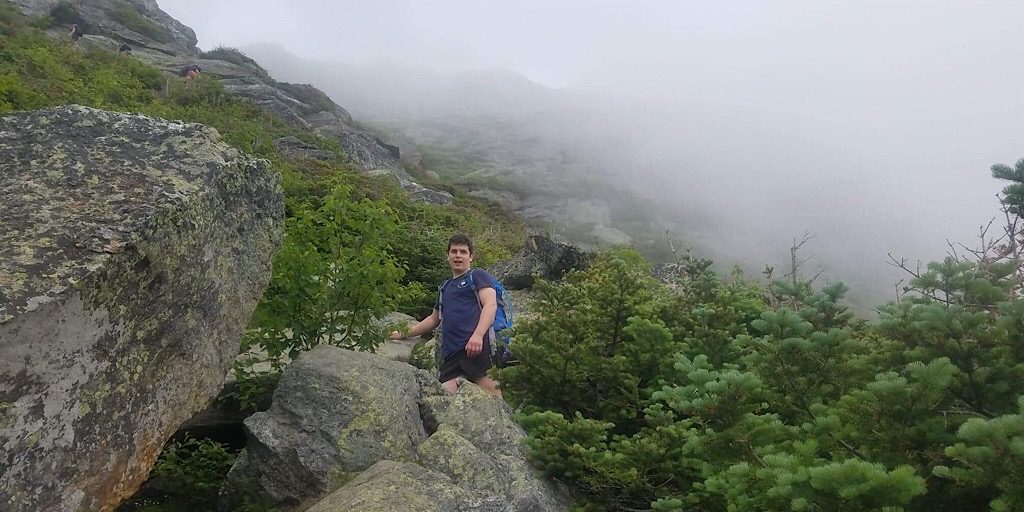 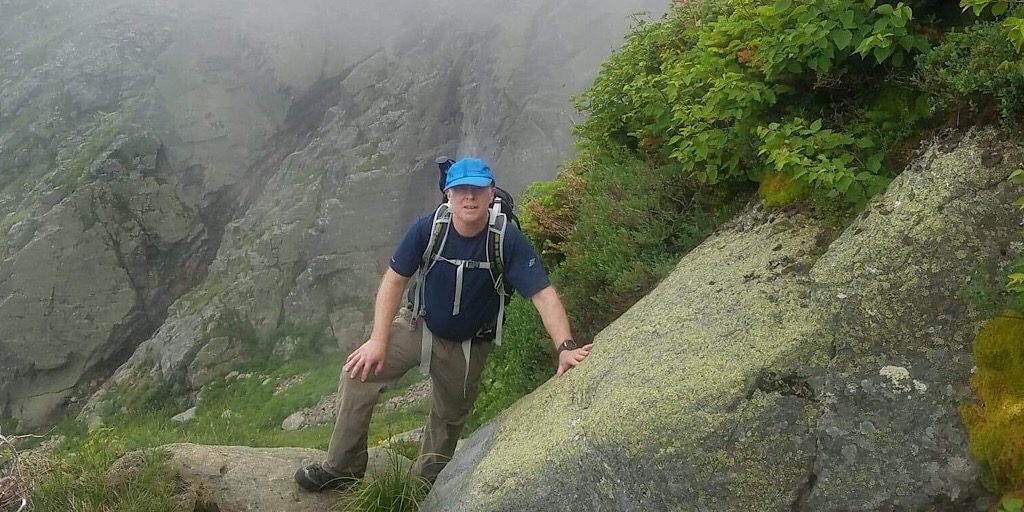 Touching a cloud. Earned it! 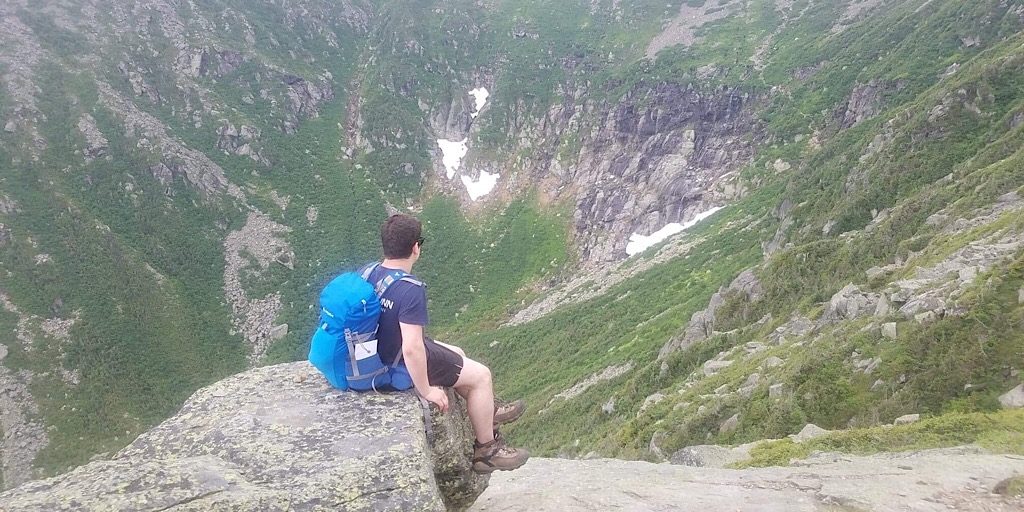 Checking out Tuckerman Ravine and its remaining snow while descending Lion Head Trail. 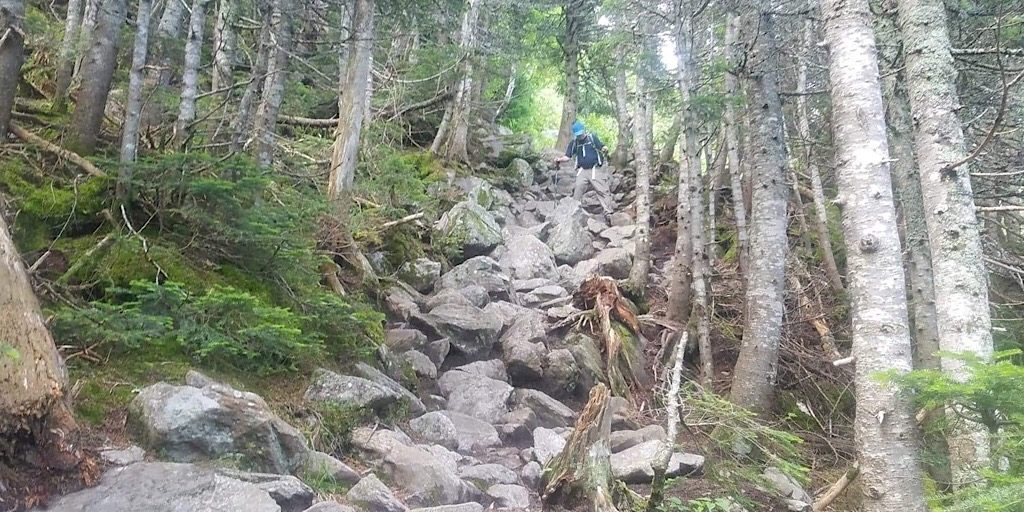 Another fine one, Ken. And team, you guys did great! Thanks for choosing Redline Guiding.