We’ll call him John because, well, that’s his name. John is a Class 1 or All-Season Trip Leader for the Appalachian Mountain Club’s (AMC) distinguished New Hampshire Chapter. It’s a hard-earned and respected position, to be sure. John is also a “Gridder” — meaning he is hiking all of the 4000-footers of NH in every month of the year (48×12=576) — so, at being nearly 500 summits toward completion, he is incredibly experienced. So why of earth, one might wonder, would John need a guide?! Well, John certainly doesn’t need one. He is quite capable and knowledgeable. But, to be clear, he wanted one. A guide/companion, so to speak. “Cheap insurance,” he told us, then added that “dying of hypothermia wasn’t on his bucket list!” You see, as an experienced AMC Leader he knows the importance of not going it alone, especially in the winter or during those iffy shoulder seasons. Especially the spring! John did the prudent thing: he hired us.

This isn’t the first time we’ve had John’s back. A recent shakedown on Jackson secured the relationship. On this hike, however, the Hancocks, both South and North (4319- and 4420-feet, respectively), were on tap for April. John might tell you he needed these peaks, but would quickly correct himself stating that the word “need” shouldn’t be in the Gridder’s (or any hiker’s) vocabulary. Nonetheless, we know what he means. We’re a group of redliners, peakbaggers, and thru-hikers ourselves. We have all felt that need. That drive, compelling us to press on. Some call it summit fever.

On point for this hike, noted often times for its many particularly tricky and potentially hazardous spring river crossings (requiring a specialized set of skills), was Redline Guide Jeffrey Shutak. Jeffrey reported an enjoyable and uneventful hike. This time the crossings were easy, bridged securely with snow and ice. It stands to reason. Winter has had a firm grip on the White Mountains region for a while, spring has yet to come to the higher elevations. Even the Mt Washington Valley is still thick with snow. Jeffrey also added that they started out with Hillsounds but quickly switched over to snowshoes and continued on with them the rest of day, with the exception of the descent from South Hancock where John momentarily switched over to crampons. Once he reached the bottom he changed back to snowshoes. Jeffrey shared a safer hand-railing technique for desent using double arm wraps. John was unfamiliar with this and liked the technique. It provides a ton of peace of mind on steep descents. Jeffrey also reported that the trail was easy to follow with the exception of a few places on the ridge. Of course, with the deep snow up there still, the blazes were difficult to see and branches were head high, a given winter hazard. Visibility at the summits was non existent, he added. Jeffrey also shared these photos: 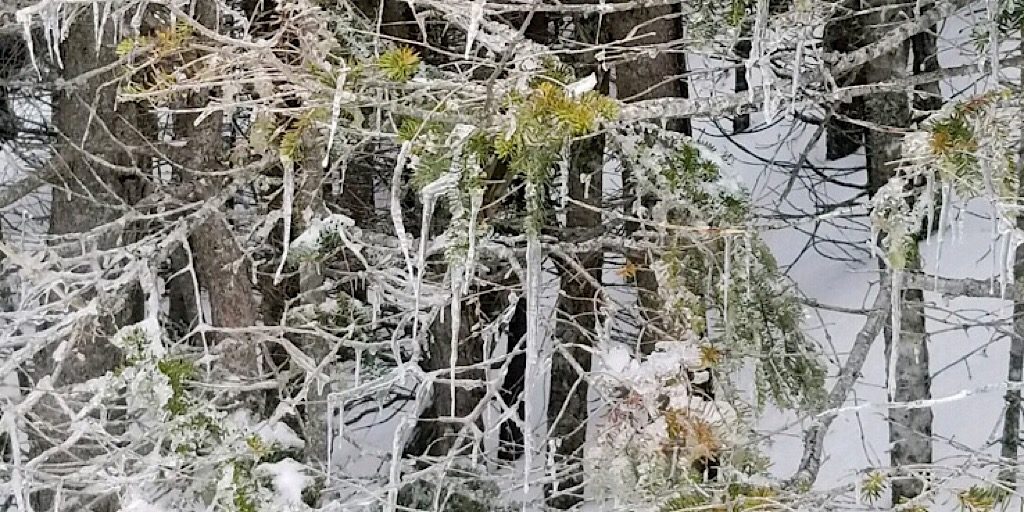 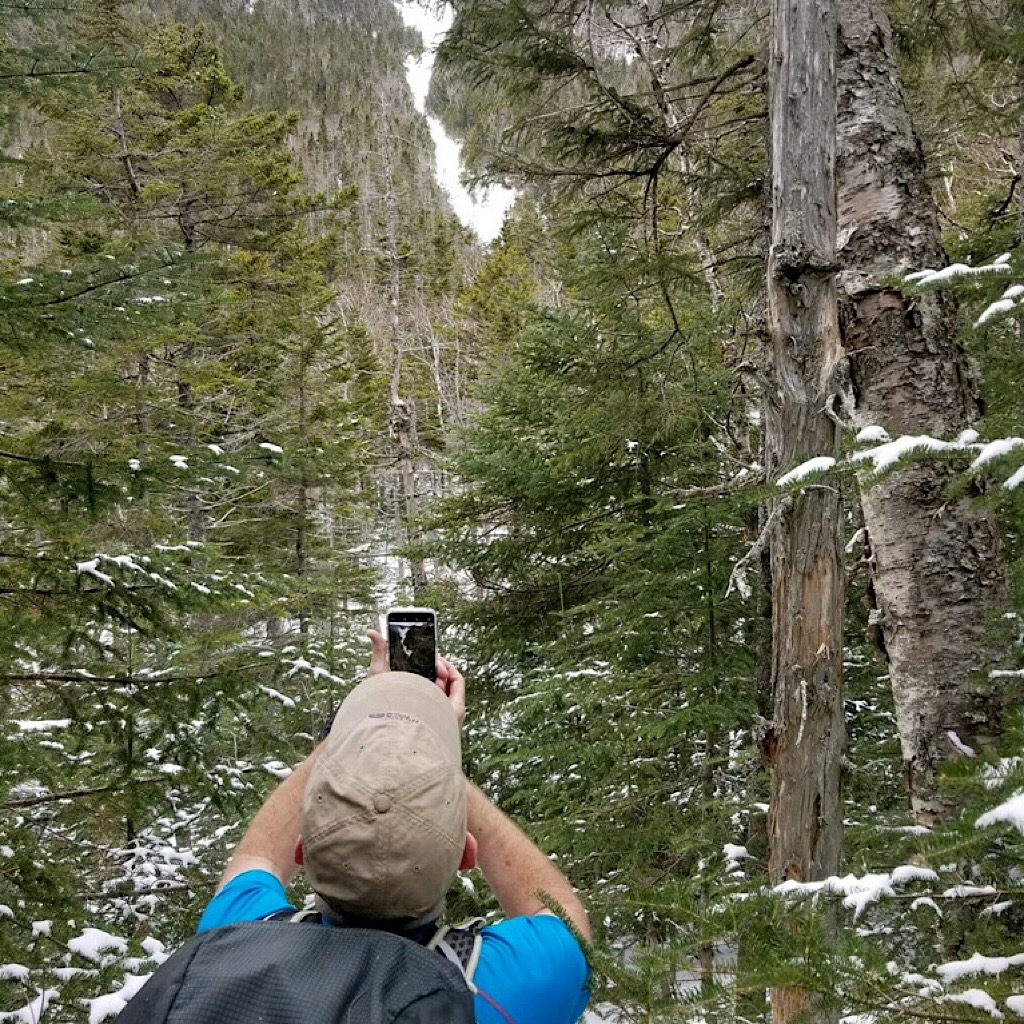 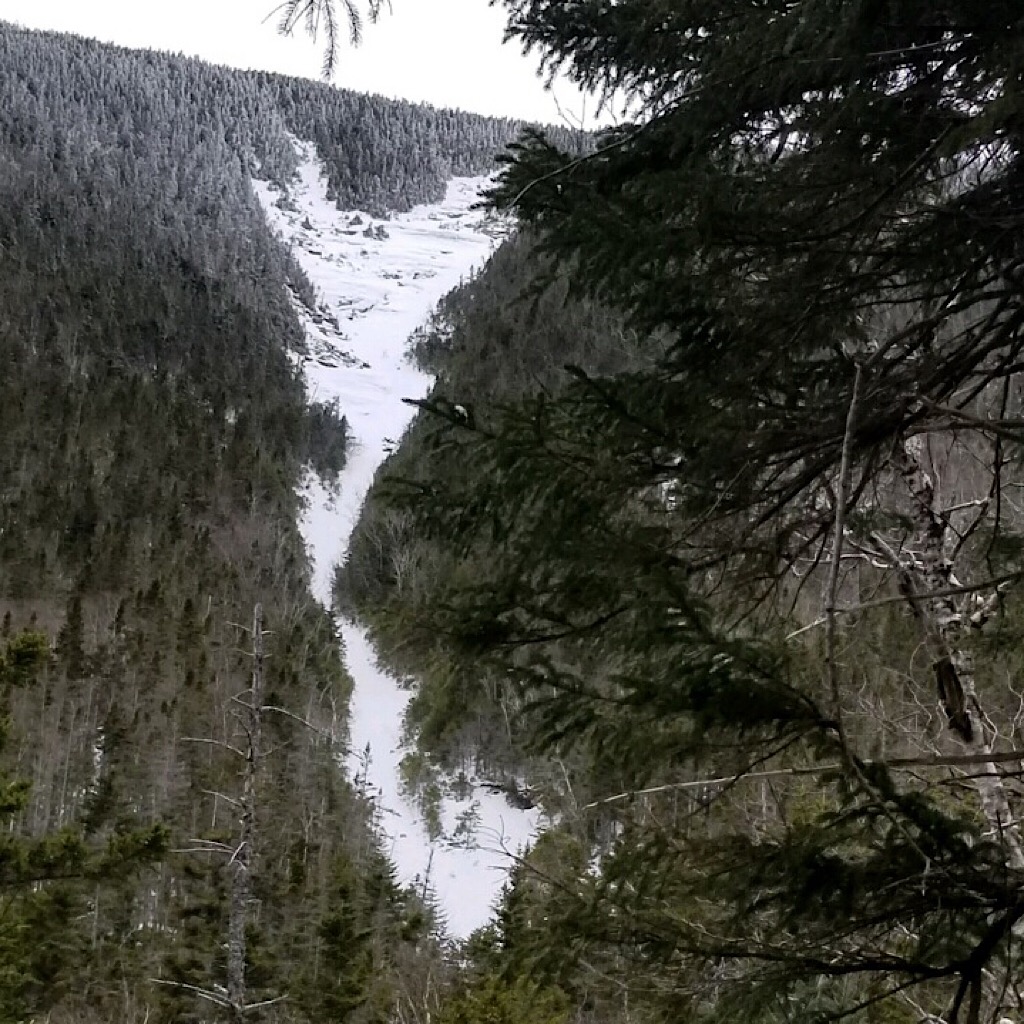 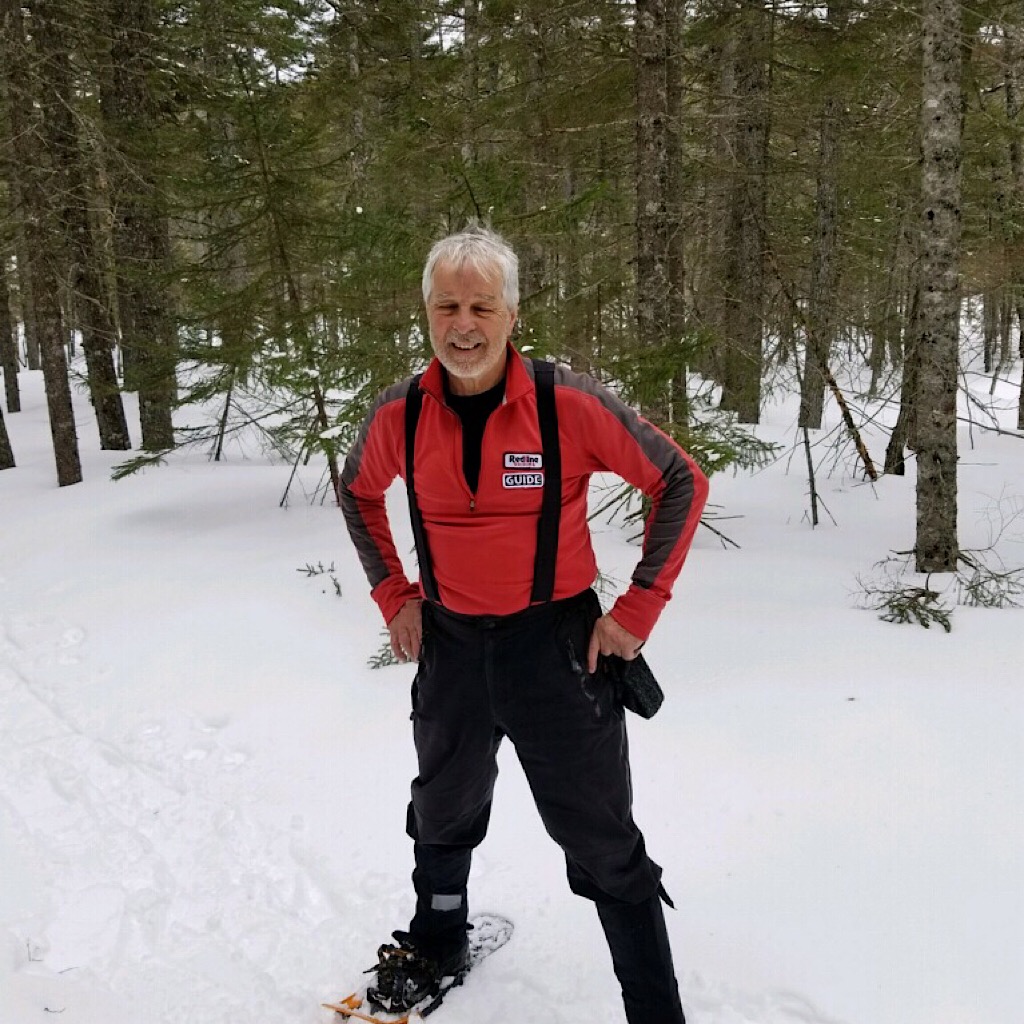 Jeffrey on the job. 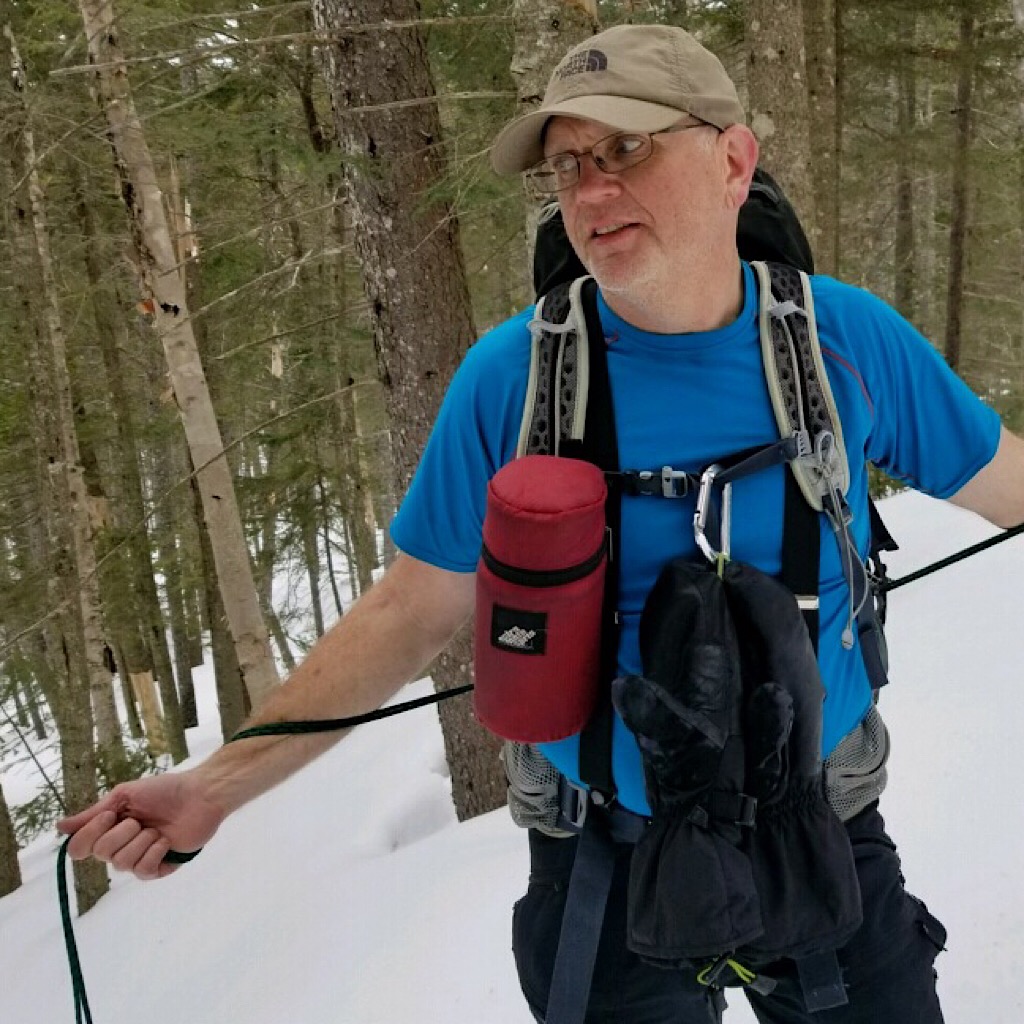 John modeling the arm wraps. Put into use, of course, arm protection and gloves are required! 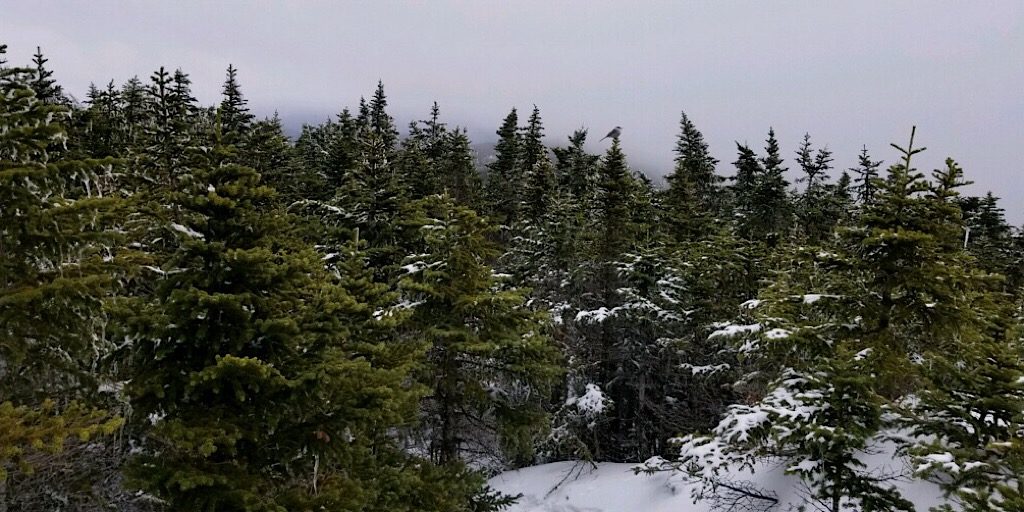 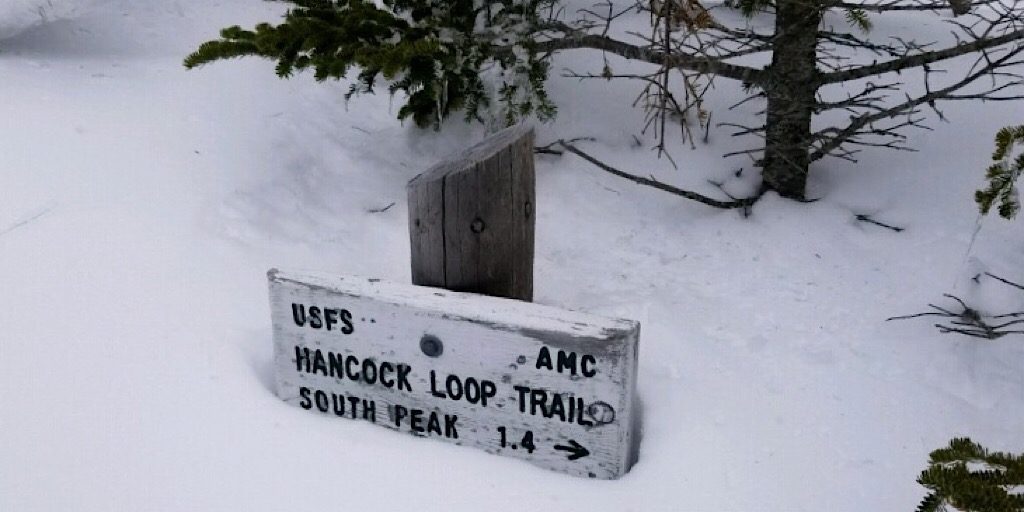 Yes, the mountains are still in winter mode.