It was a long, burly, windy, snow-filled day, but damn was it fun.

Mountain running in December is not something we advertise, but it is apparently what we can do. In snowshoes, if needed. At least that’s what Redline Guide Erik Samia did, along with an ultrarunner from Massachusetts! And not only does she run, our guest is also a “redliner” — meaning she is hiking all the trails in the guide book. She happened to need Pine Link and thought it’d be a good idea to hire a guide for the run so she came to us. Erik was eager to lend a hand.

They met early and after dropping off a car started the day with a warm-up run up Pinkham B Road in Randolph heading up to the height-of-land. There they accessed the Pink Link Trail and started trudging up the mountain climbing toward Howker Ridge, and ultimately to the AMC’s Madison Spring Hut crossing the exposed north side of the 5366′ Mt Madison enroute. This is one of the 4000-footers situated in the rugged northern half of the Presidential Range.

Since Pinkham B Road closes in the off season and being that hikers are generally a lazy lot (we are kidding), rarely is the trail used in winter. (We say “winter,” by the way, and mean it. The date of the run was December 9th but it is every bit of full-on winter in the mountains this year already.) The trail was in fact unbroken, as expected, so the duo had to fight for it plowing through waist deep snow. They slipped, they slid, they gained ground then lost it again, even got stuck a time or two, but they were swimming upstream, so to speak, and slowly making positive progress. We offered to do this trail in the other direction, which might have resulted in a giant snowshoe glissade, but there were complex redlining plans going on involving other trails she needs if time alllowed so this way made sense in that regard. A non-redliner might not get it.

No real “running” took place on Pine Link Trail, but it was completed, and as Erik reported emphatically (a man loving his job), they had a terrific time. Tiring but fun. A ton of laughs, and we can imagine it knowing the conditions they encountered. They donned Microspikes after leaving Howker Ridge before crossing the alpine shoulder of the mountain braving 50-60mph winds as they went making it to the now-closed hut. Out of the wind at the hut Erik made sure we knew all was okay before heading down. Before they left, though, they admired the alpenglow skies as the day waned. With light traction on foot, again the team set off at a gallop, laughing as they went. They made it back safely to the car they left, the day a success. What summmed it up most, perhaps, was when Erik candidly declared that “it was a long, burly, windy, snow-filled day, but damn was it fun.”

Here are some photos. They are by Erik unless marked otherwise. 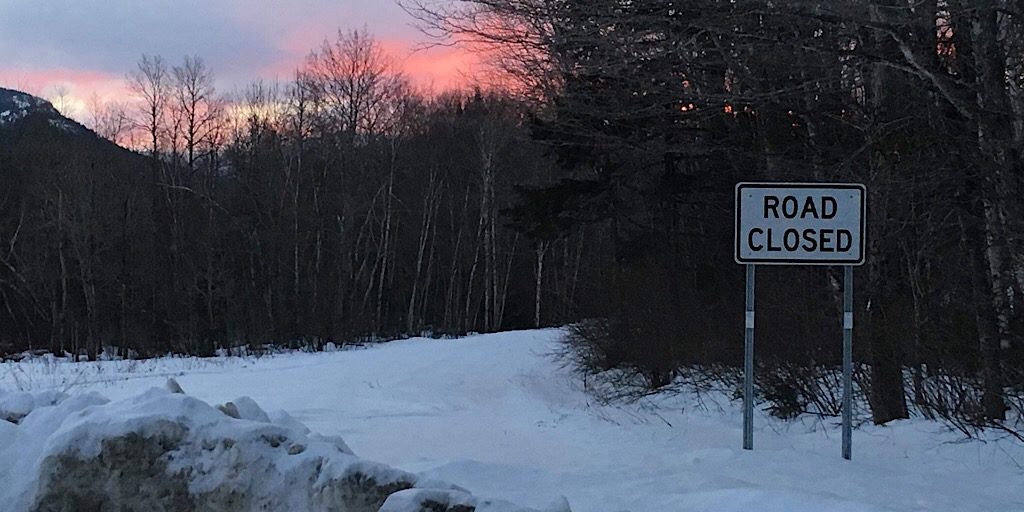 Not closed to runners. (Guest photo.) 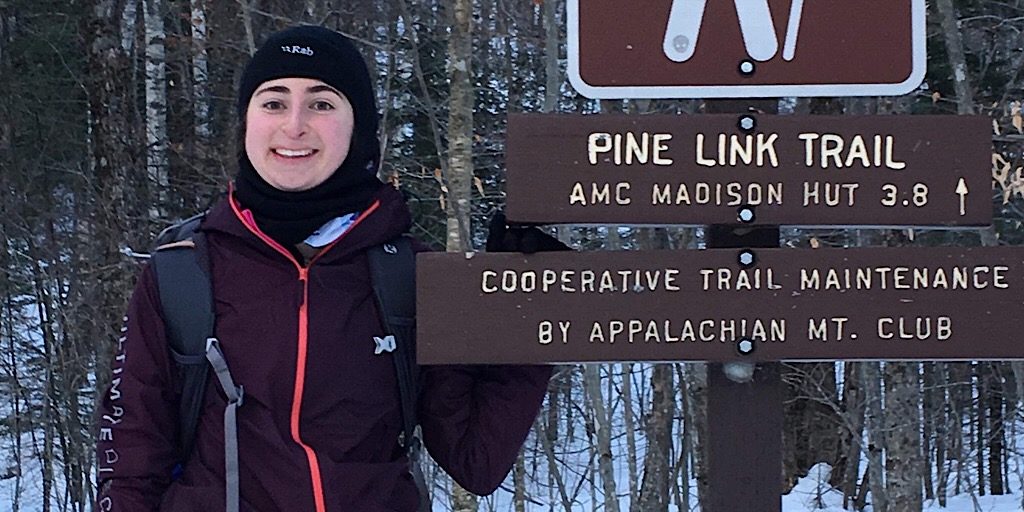 Ready to start getting this red line under control. (Guest photo.) 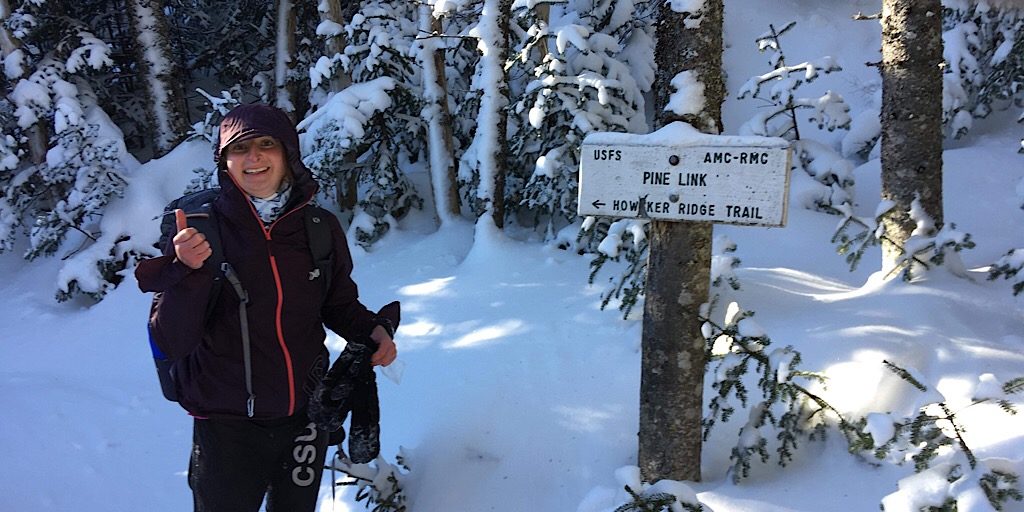 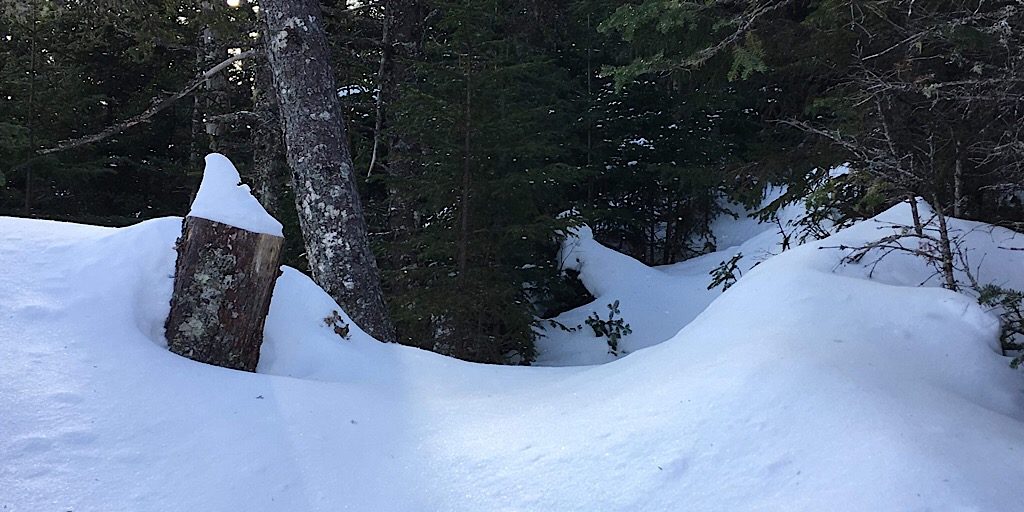 This is one snowy trail, ready to be broken out. (Guest photo.) 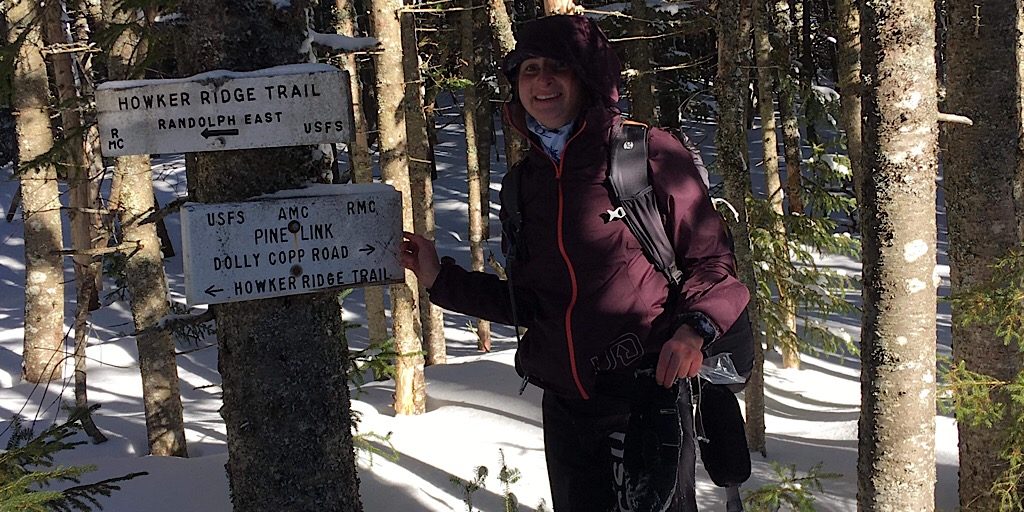 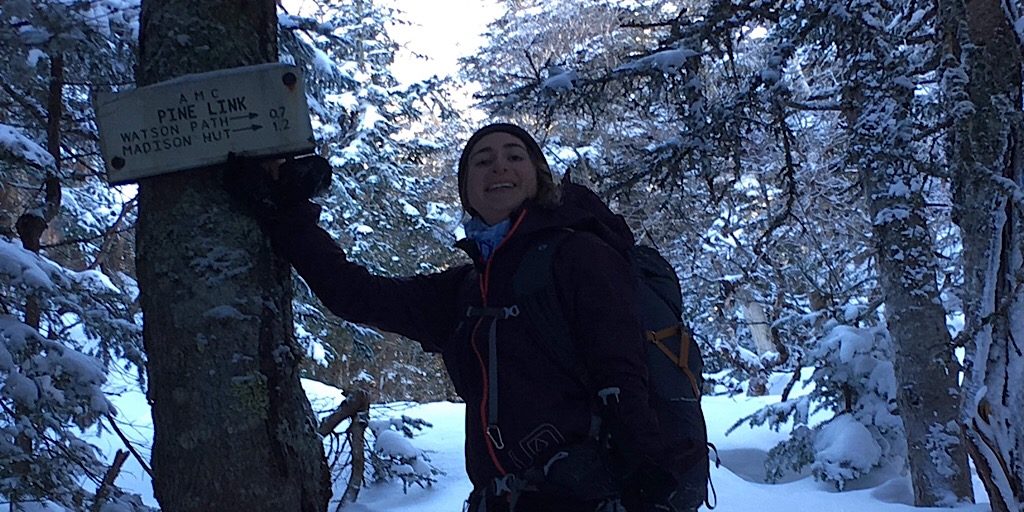 This is one tough hike. (Guest photo.) 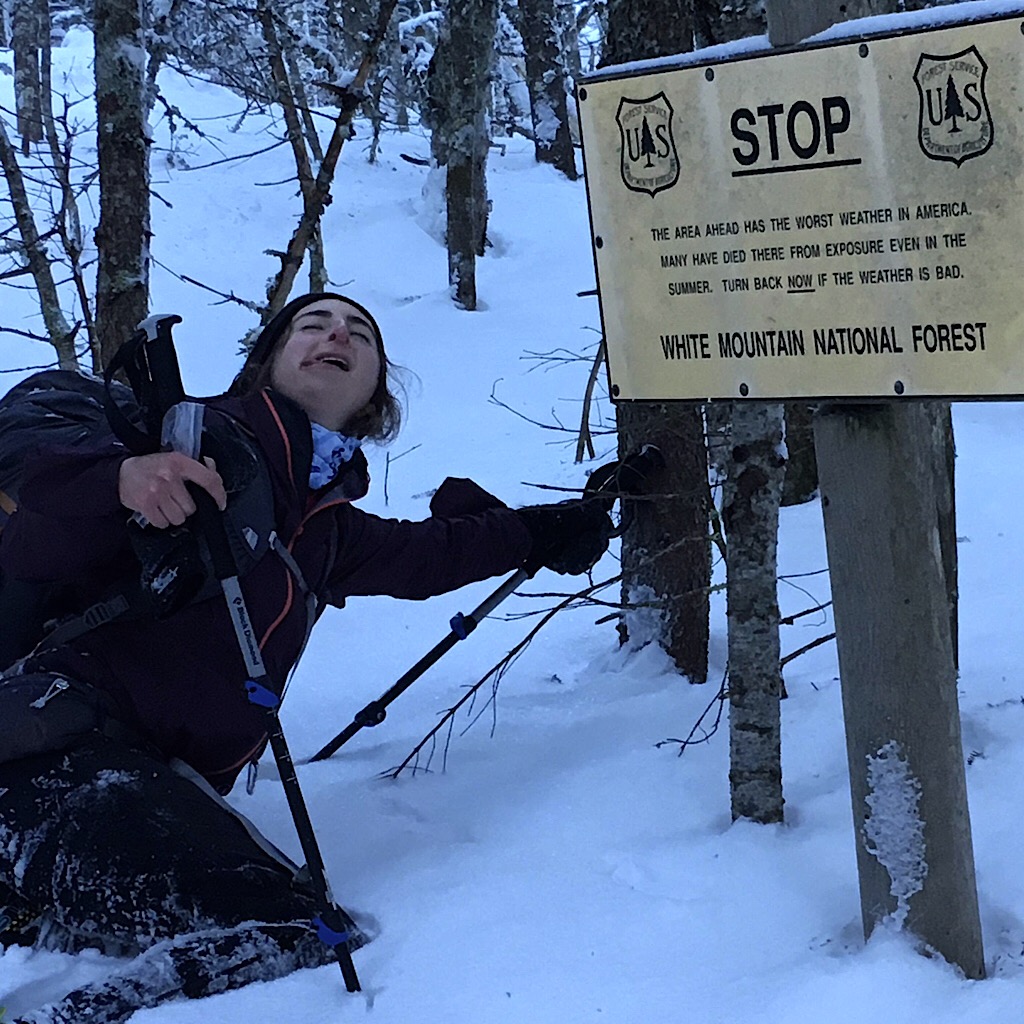 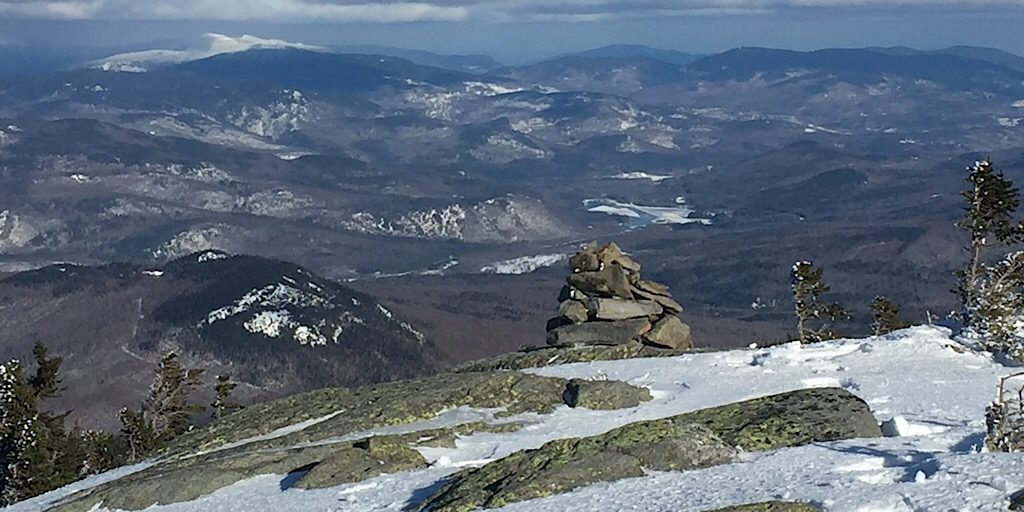 They start getting some views. 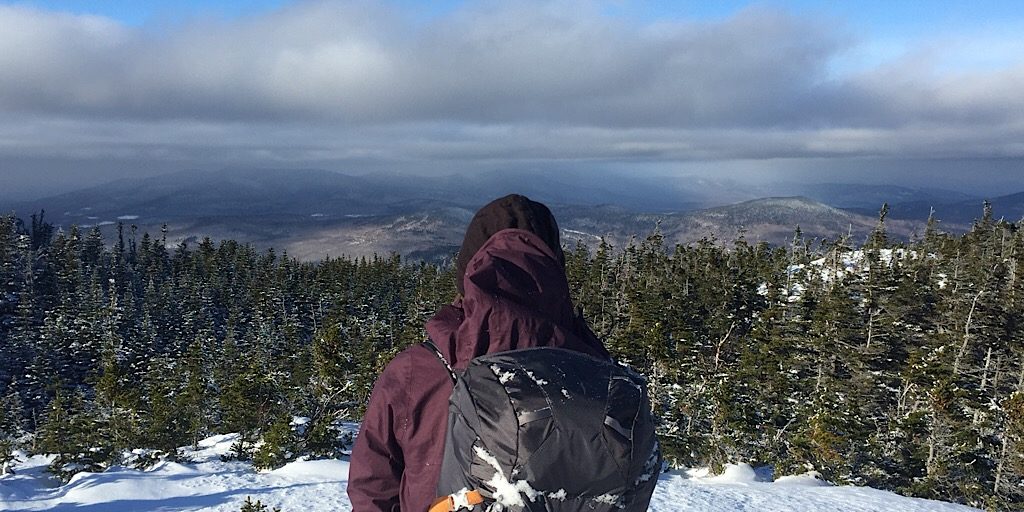 One of those Howker Ridge moments. 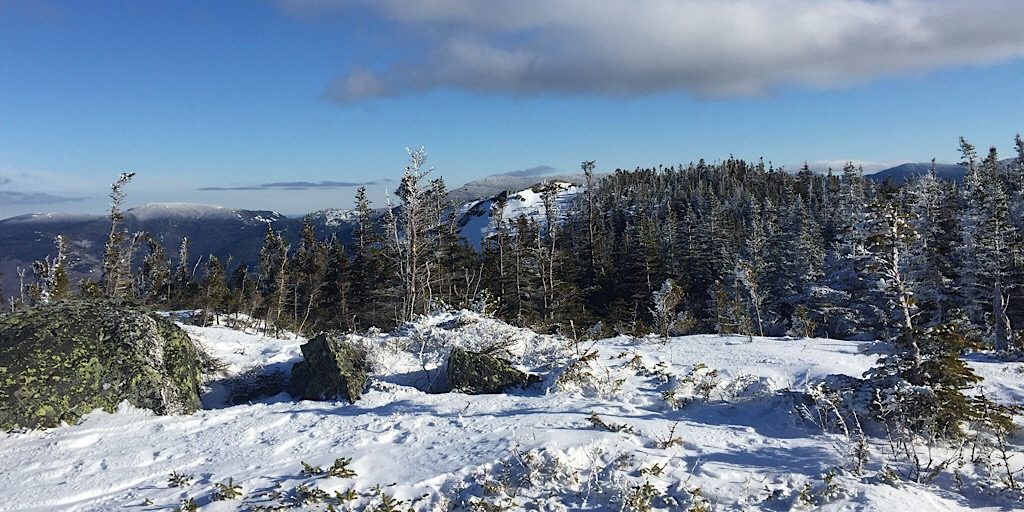 Early visitors referred to these views as sublime. 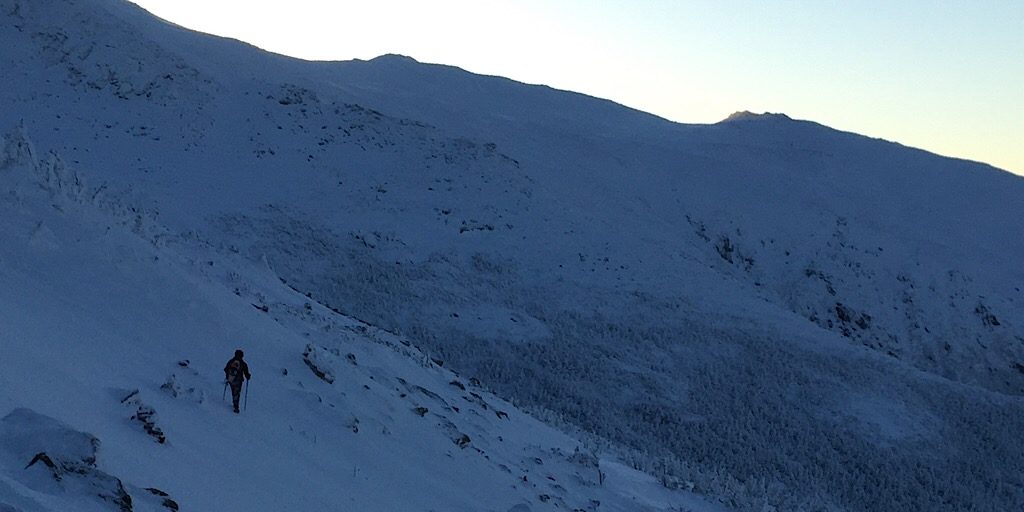 December hiking is long on fun, but short on sun. 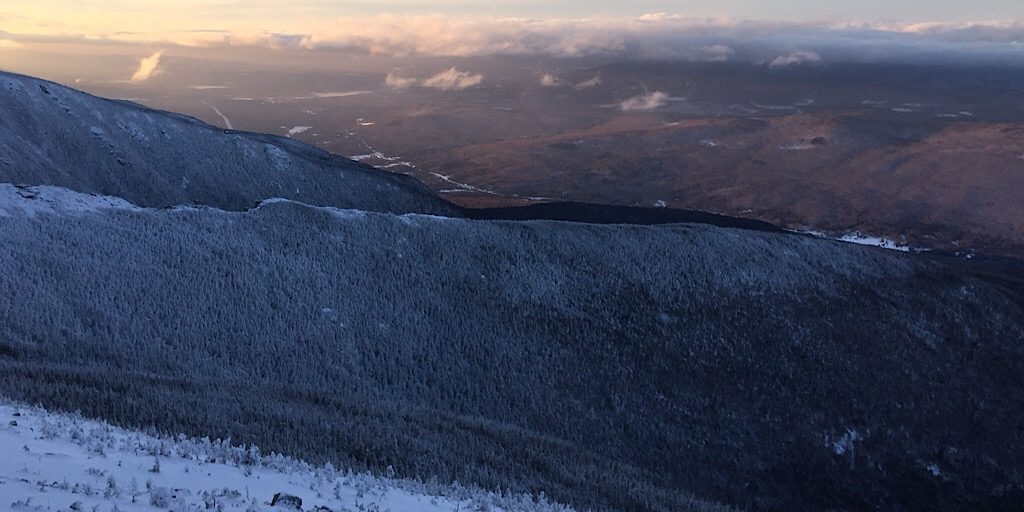 The windy traverse is nearly done. 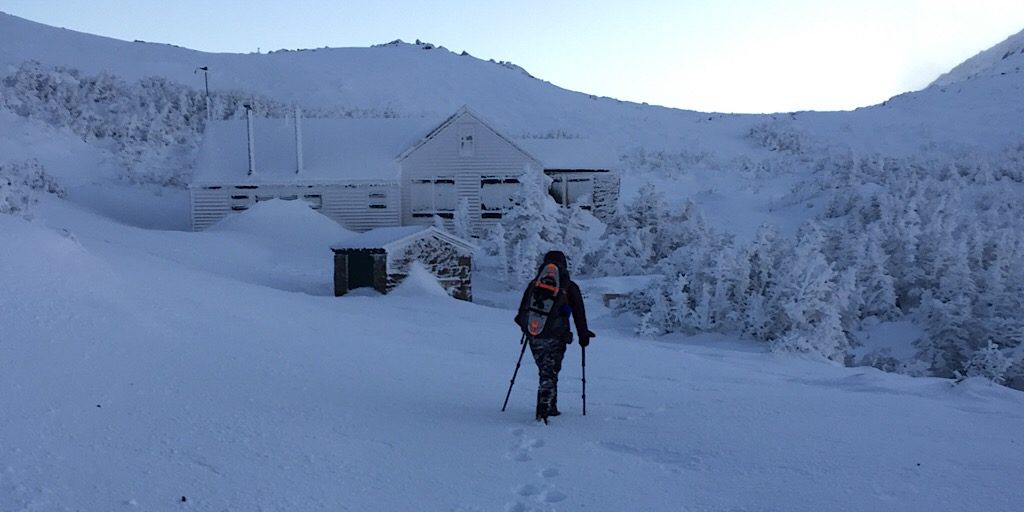 Pine Link Trail done once they reach the junction by the hut. 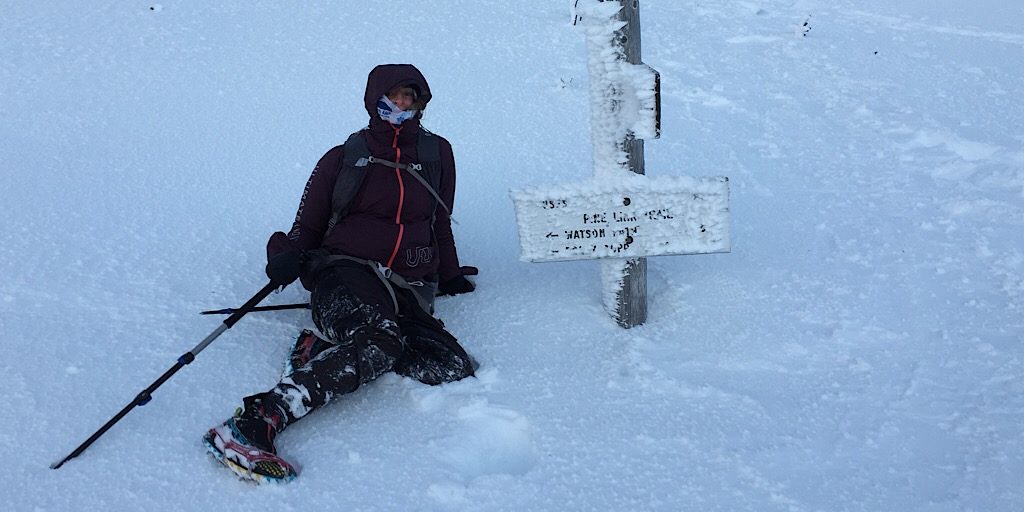 A huge smile lives in there somewhere. 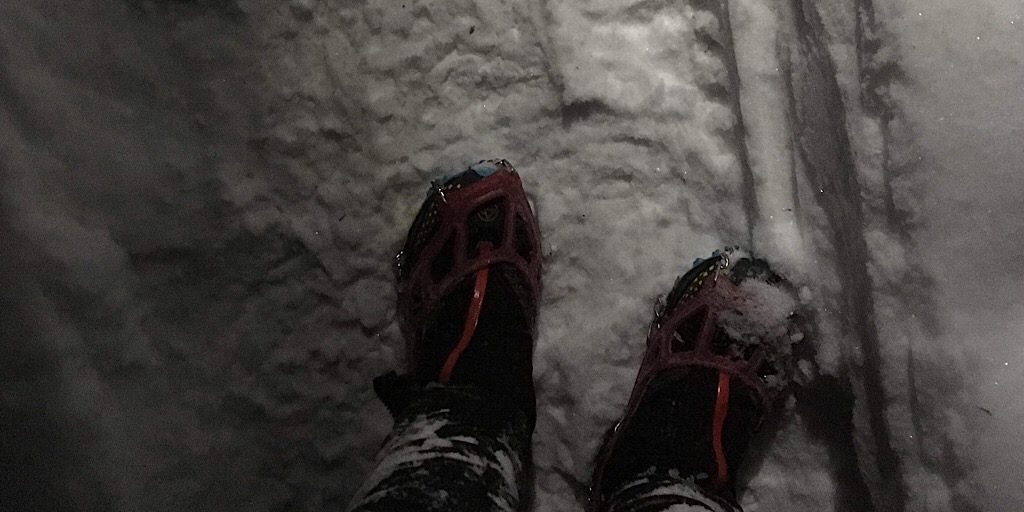 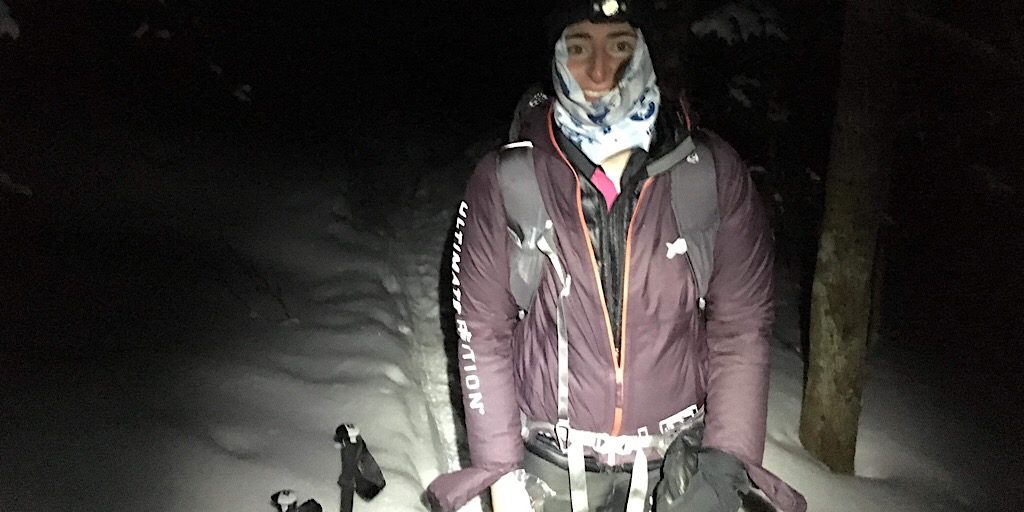 Well done on successfully bagging Pine Link Trail in some demanding conditions both of you. And, Erik, great job leading a safe, enjoyable tour and making it wicked fun! Thank you for choosing Redline Guiding.