Visiting from Connecticut guests Laura and Mike, a husband-wife team, wanted to experience our tallest peak, the grandest of the “4000-Footers,” the 6288-foot Mt Washington — in winter conditions. And right now, trust us when we say winter is in full swing on the mountain. It’s not far behind in the Valley, either, for that matter.

On task for this lead was newer but up-and-coming Redline Guide Ryan Mcguire. Ryan’s been hard at work both getting certified, participating in our in-house training, and really just working his butt off gaining experience. This was his first solo Mt Washington lead for us and he was totally ready for it. Proof of this was shown in the results: The team successfully summited the mountain and our guests had an amazing experience during the process.

Together with Ryan and our guests, while considering a number of factors, we decided to stick to the mountain’s most straightforward and sometimes-emergency route along to railroad easement on the west side of the mountain. It’s the least dramatic in terms of technicality, and although it is quite physically demanding, it is the shortest approach. Advantages include great starting views and navigational surety (hence it being a “sometimes-emergency route”). A disadvantage might be the exposure, especially on the return when hikers will face the western winds. If given the right day, however, it can be quite grand. They were given the right day. And it was quite grand, indeed. 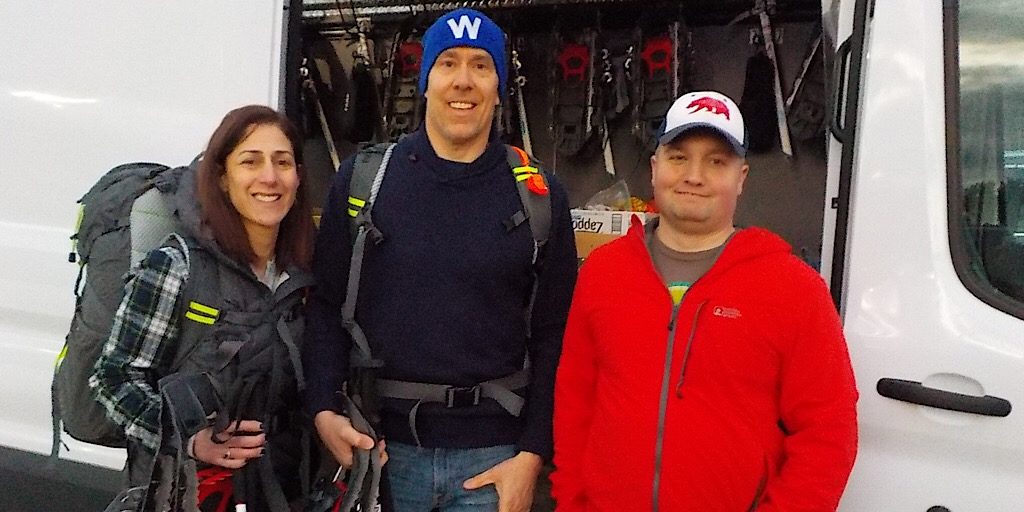 Preparing our guests prior to the hike. L-R: Laura, Mike, and guide Ryan. Photo by Mike Cherim.

Since our guests had two days to play with and, fortunately, we had the flexibility, we picked what was clearly the better of the two days. Instead of hiking on the low-visibility day with the 85mph winds and sub-zero temperature, we were able to choose the balmy 10-degree day with placid winds. Additionally the forecast called for mostly clear, sunny skies. Perfect! And a perfect day to celebrate a special birthday on the mountain… but we’re getting ahead of ourselves. 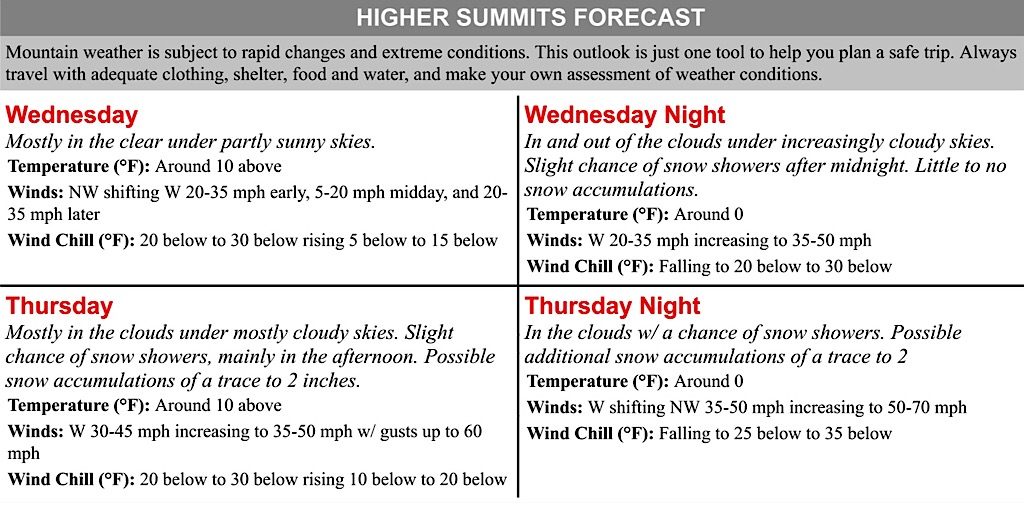 Let’s start at the beginning when we met with Laura and Mike the evening of the day of their arrival to go over gear. We provided Alpine Ready Packs so most everything was covered, but we did have other things to consider, especially since one of our team was a Raynaud Syndrome sufferer (one planning to try a potentially curative technique we wrote about). Another thing to consider was boots which we rented locally at IME. We also provided food, which had to be gluten free for one member of the team due to them having celiac disease. When all said and done we parted ways for the evening planning then for them to meet with Ryan bright and early at the AMC’s Highland Center two days later.

Fast forward to their meeting spot the morning after next, dressed, packed, and ready to hike. They non-invasively caravanned to the Cog base paying $10 to park before the new rules are soon put into effect. The rest was the best, but pretty much uneventful. They pushed themselves hard, one was celebrating their fiftieth birthday so there was some significant meaning behind the day. A reminder that youth grows if it’s fed. A reminder that one still can do.

The skies were clear just about all day, the temperatures while brisk felt warmer in the sun. The winds fell flat against the day keeping our Raynaud sufferer in the safe zone. The trio took regular breaks, but stopped only long enough to get stuff done eating mostly snacks. They stayed moving as much as possible picking up one heavy boot and snowshoe and putting it in front of the other. They made good time summiting well before AM became PM and managed to get back to square one safely hours before dark. And once safely back at the parking lot Ryan presented one more special surprise: he gave the team gluten-free birthday cupcakes to celebrate. Nice, thoughtful touch Ryan!

What follows are more photos of the day, all courtesy of Ryan unless otherwise marked. 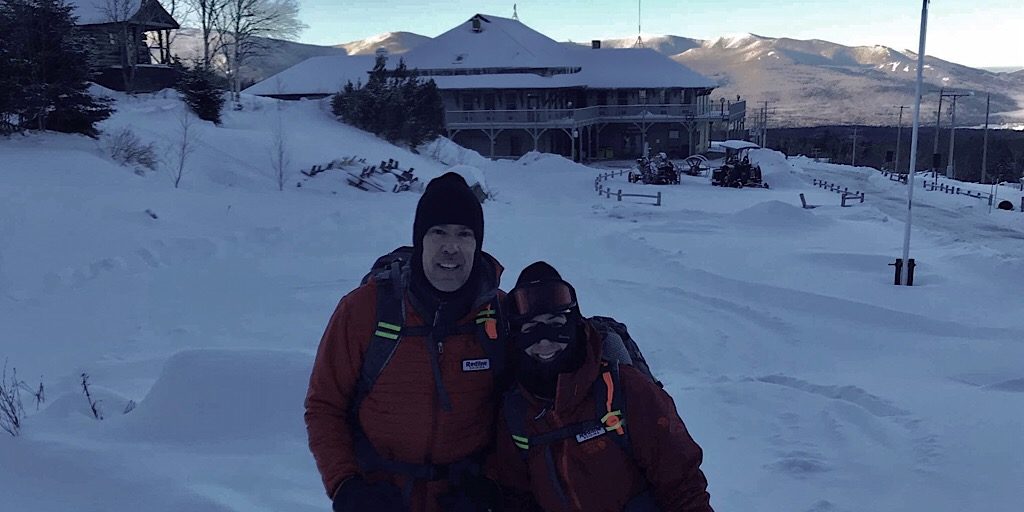 We recommend starting at the trailhead feeling nippy. 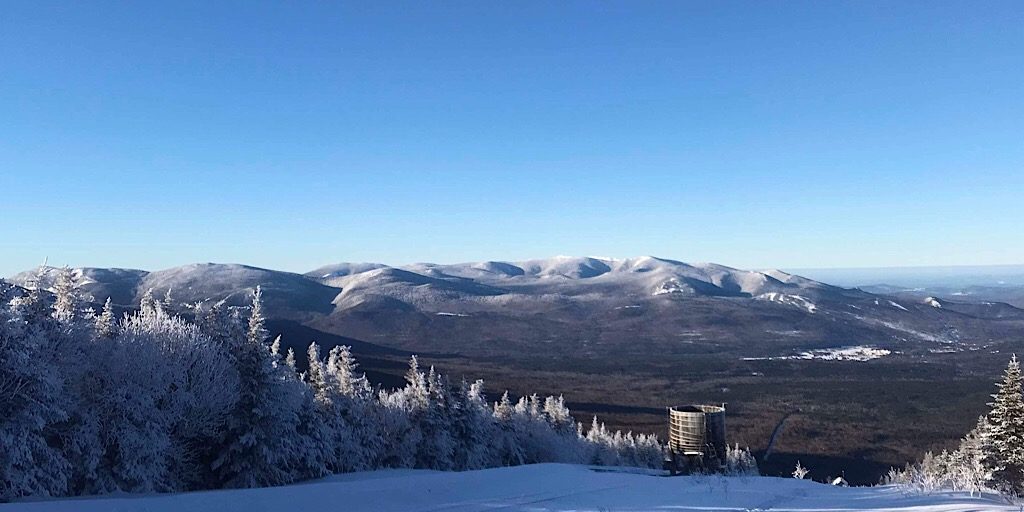 Shaping up to be as forecast. Stunning! 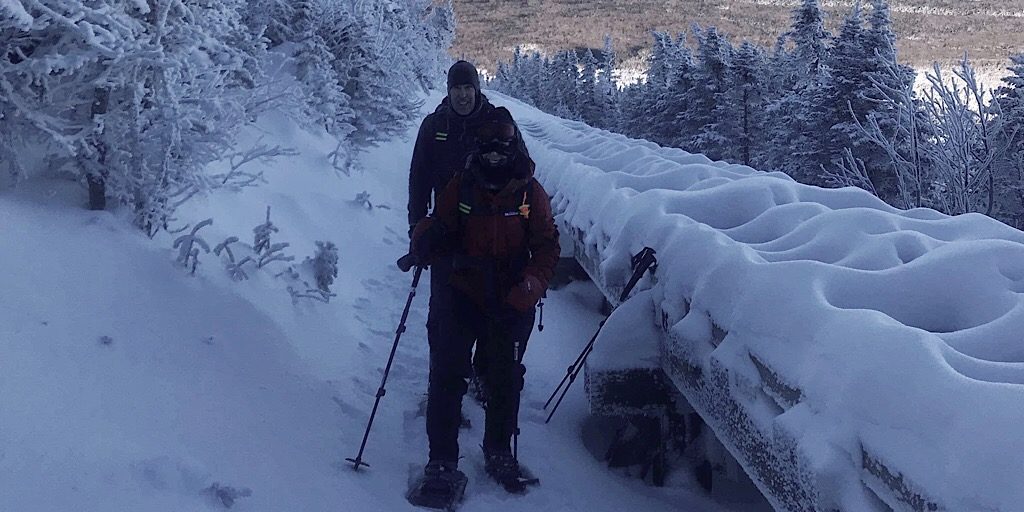 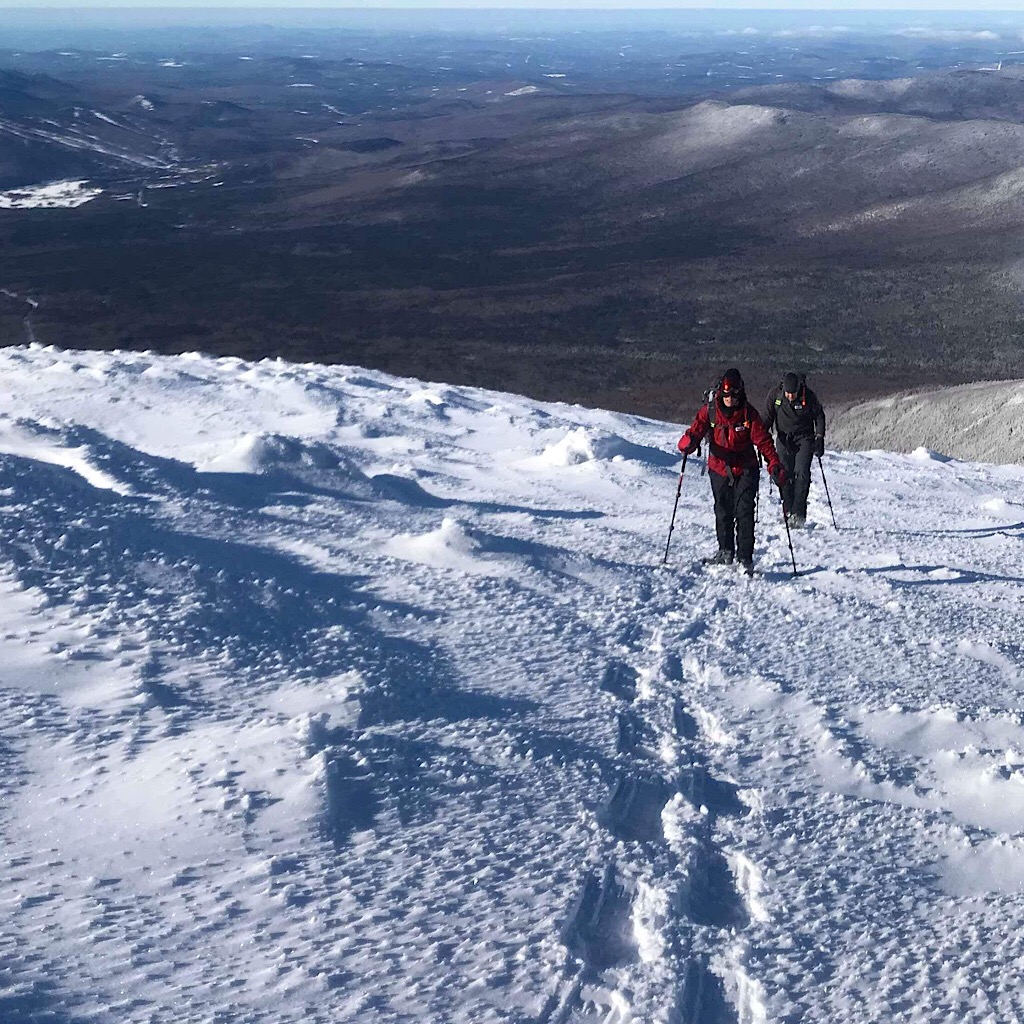 The magnificent Skyline area. As it should be. 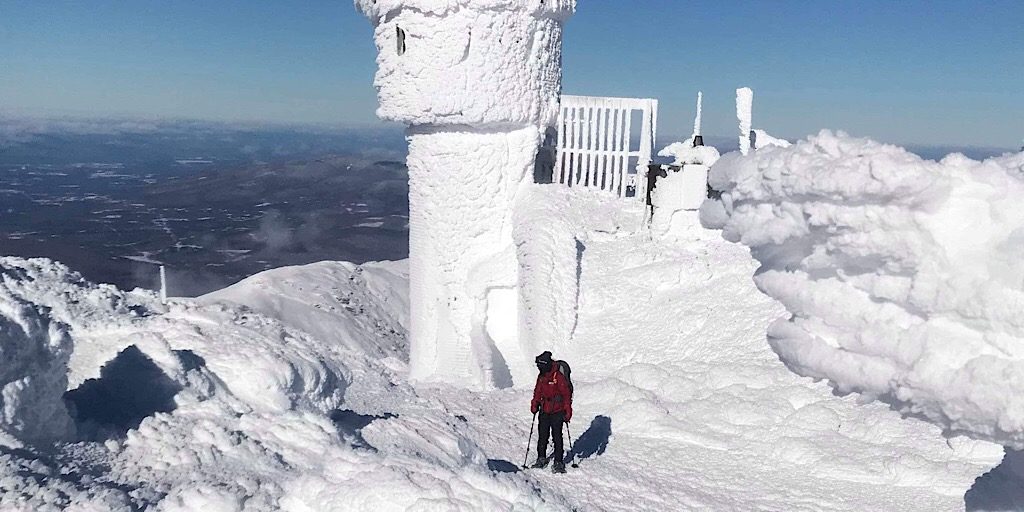 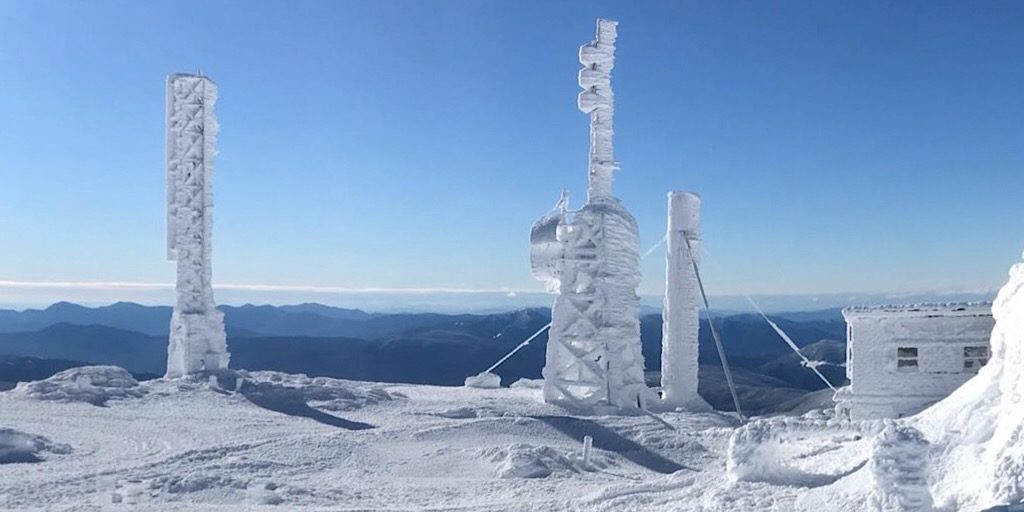 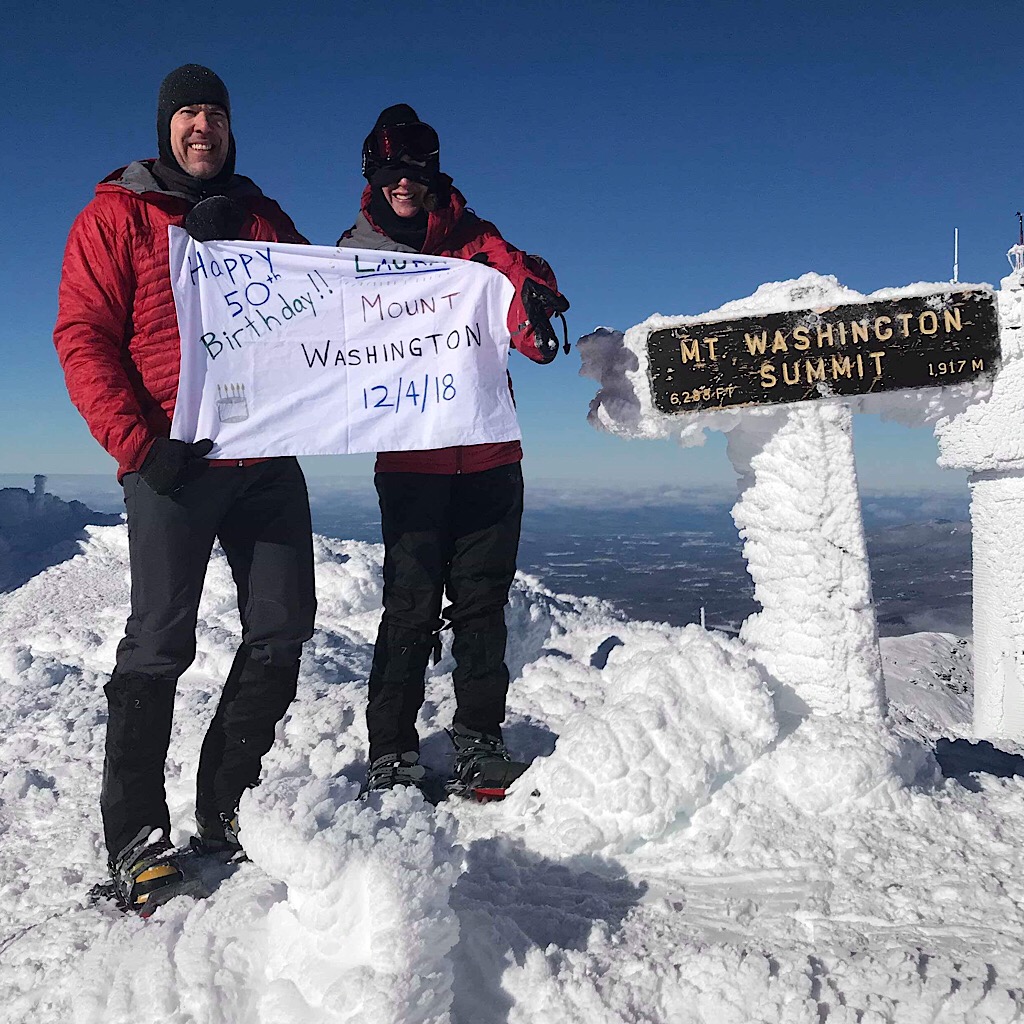 Well done! The Mt Washington summit. (Note: Weather forced them go for it on 12/5… the flag was made ahead of time.) 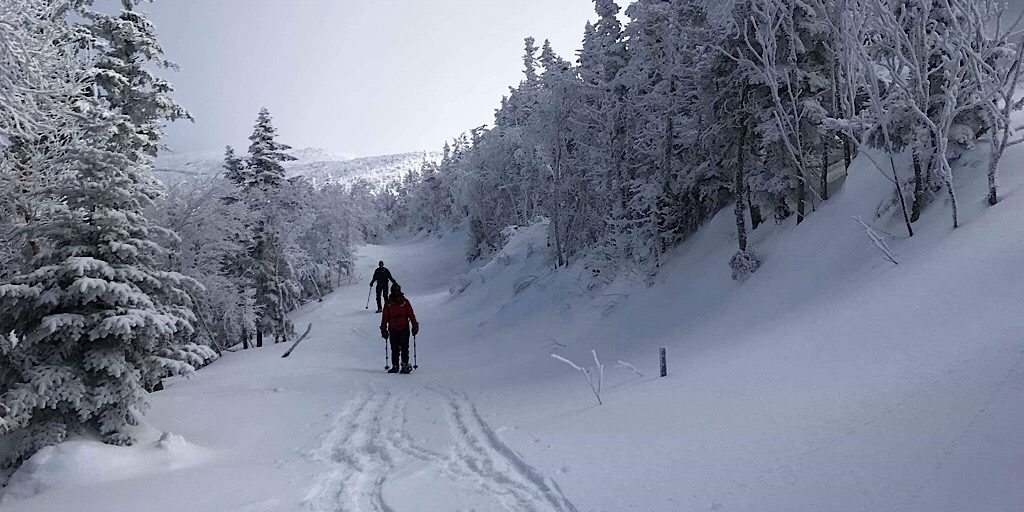 Clouds begin to close in on the summit a bit as they descend. 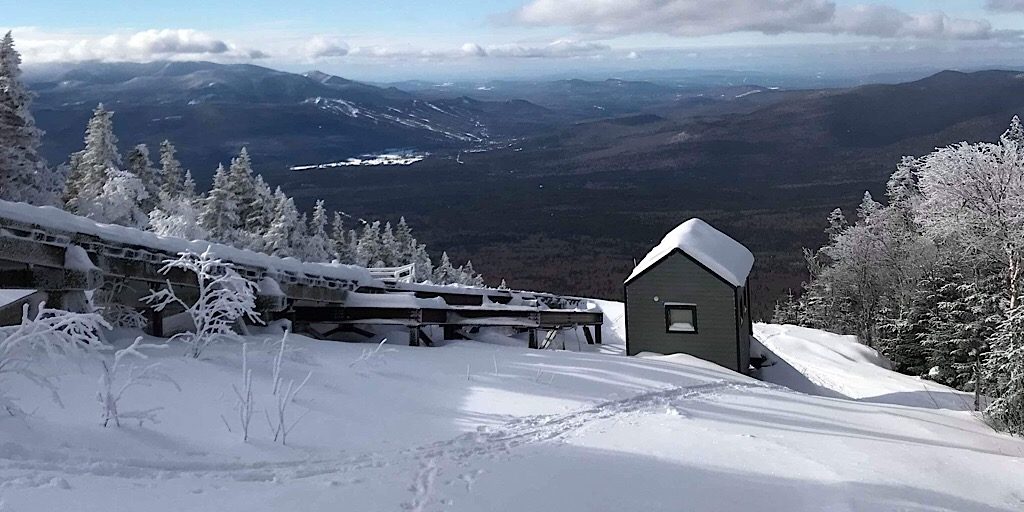 Switchhouse. Not far now — though Ryan could be lying about that. 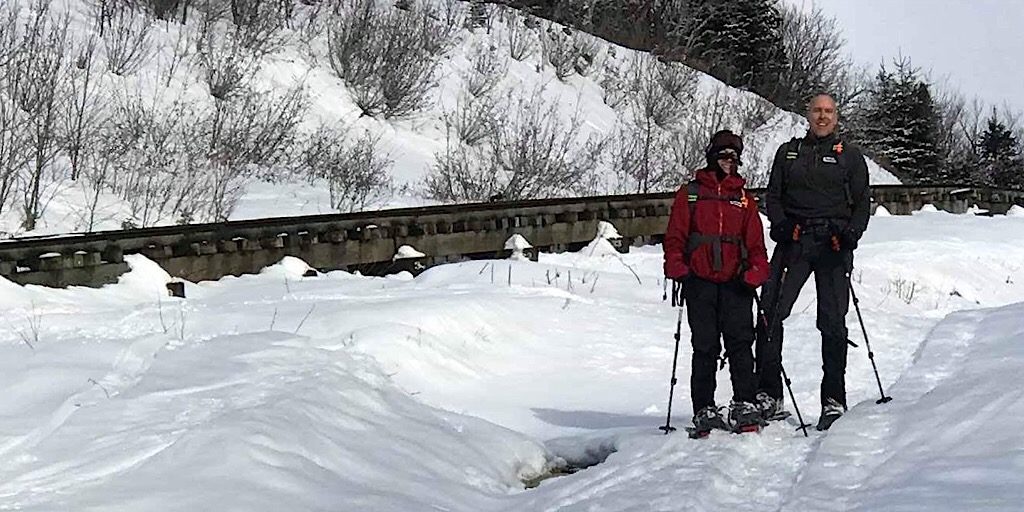 “Wow, OMG, what an amazing experience. Tough yet delightful. Hated it almost as much as we loved it.”

Congratulations on summiting Mt Washington Laura and Mike (and Happy Birthday). You wanted it, you readied yourselves for it, and you got it. And Ryan, well done, sir! A fine lead indeed.