We really like to share the cool things our guides do when they’re not out there guiding. And they do a lot. So much, in fact, it’s hard to keep up. We recently mentioned that Redline Guide Bill Robichaud just finished his Appalachian Trail thru-hike. And while our focus was on that piece, Arlette Laan finished hiking the New England Trail with her husband, Rich. Jeffrey Shutak hiked throughout France and Italy with his girlfriend, Bonnie, and last but not least, Ryan Mcguire, attempted Mt Rainier.

What follows is a short synopsis of each adventure along with a few photos of each. 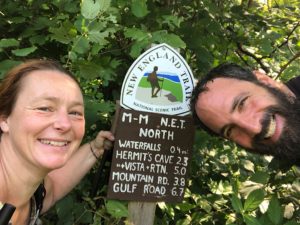 Arlette’s passionate about thru-hiking long trails as her profile can attest. It’s her greatest joy, but it is a joy that is far removed from what society might call “normal.” Most people work their day jobs barely able to get out on weekends for a day hike. The idea of spending days, weeks, or even months on end hiking is ludicrous. Even if it doesn’t seem crazy to you, it’s certainly not possible. How, after all, does one play hooky from life and the allegedly necessary adulting it entails? Well, like Arlette and her husband, Rich, you have to make it a priority and plan your lives around it. Arlette and Rich have both very worked hard to create the life of their dreams. This hike, the New England Trail, is just another in the long line of endless adventures their life together entails. Admit it, you’re a bit envious, aren’t you? We are. 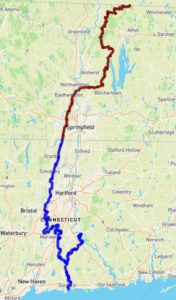 As described on the official the New England Scenic Trail website:

The New England National Scenic Trail (NET) is a 215-mile hiking trail route that has been in existence for over half a century. The NET travels through 41 communities in Connecticut and Massachusetts, and is comprised primarily of the historic Mattabesett, Metacomet, and Monadnock (M-M-M) Trail systems. […] The NET travels through classic New England landscape features: long-distance vistas with rural towns as a backdrop, agrarian lands, un-fragmented forests, and large river valleys. The trail also travels through colonial historical landmarks and highlights a range of diverse ecosystems and natural resources: mountain ridges and summits, forested glades, wetlands and vernal pools, lakes, streams and waterfalls. —NET

It sounds lovely. Here are some photos of their hike. 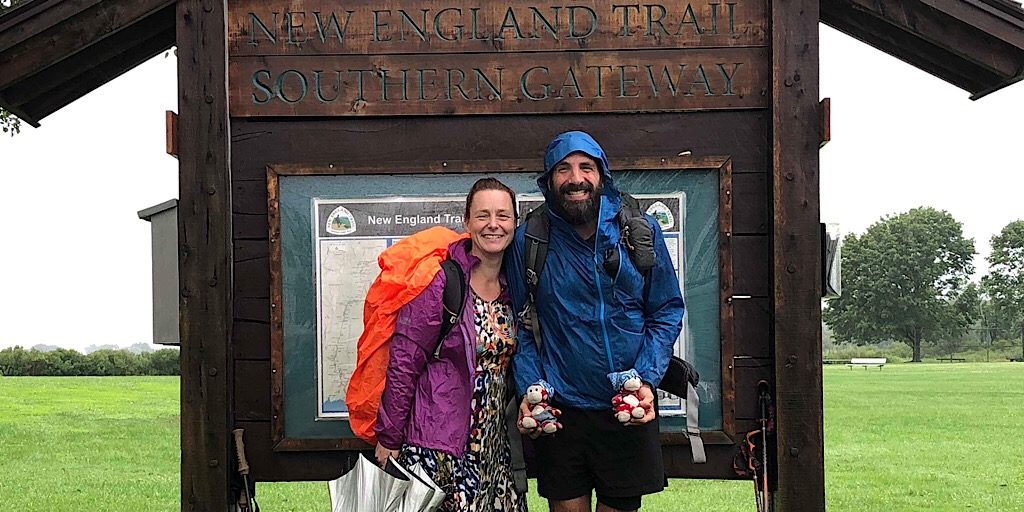 Starting out, Arlette and Rich begin at the southern terminus. 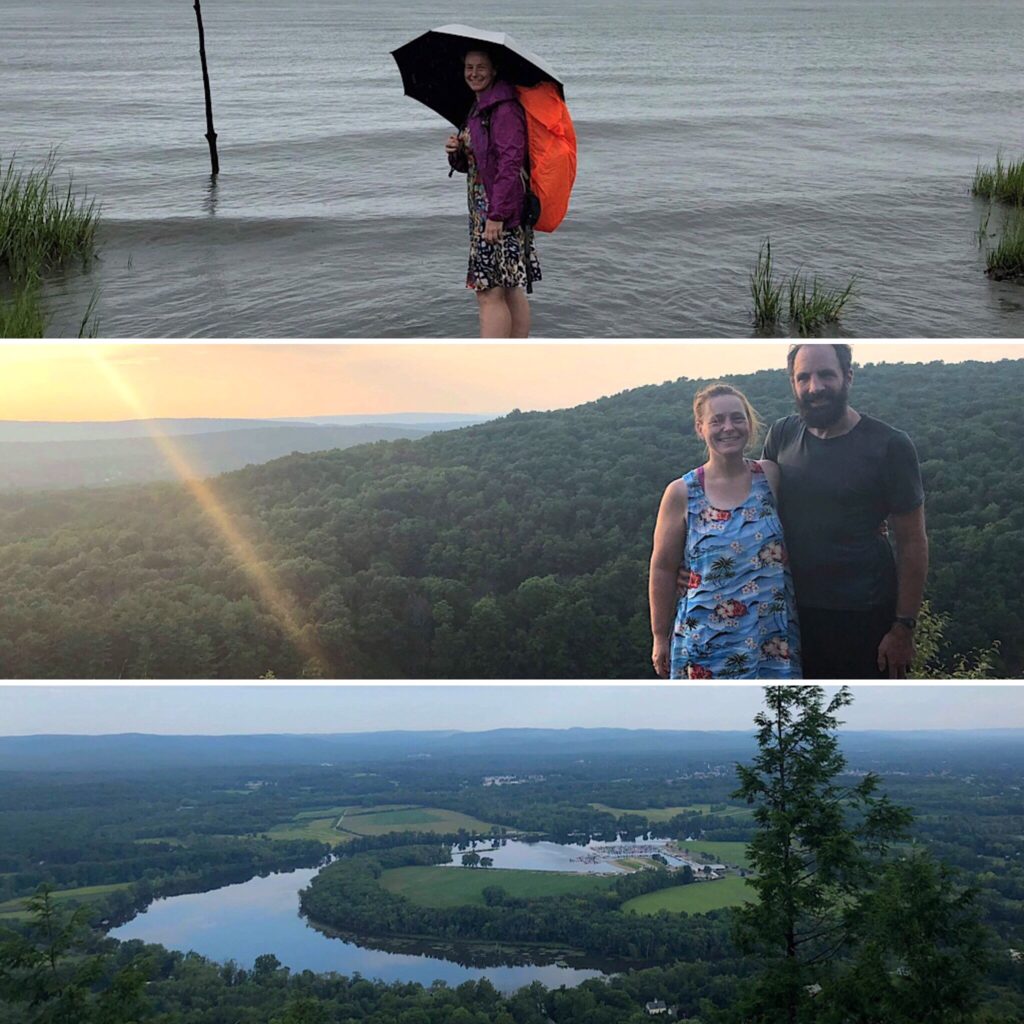 A few random scenes along the way: Arlette starting out in the waters of Long Island Sound (top); Arlette and Rich at sunset near the Bradley Hubbard Reservoir in Connecticut (middle); and the Oxbow near the Connecticut River (bottom).

It’s a very urban hike and while you’re never far away from traffic noise there are some good views to be had. We had a very hot and humid hike and had to put up with gnats and mosquitos so we think this hike is better done in the fall. —Arlette 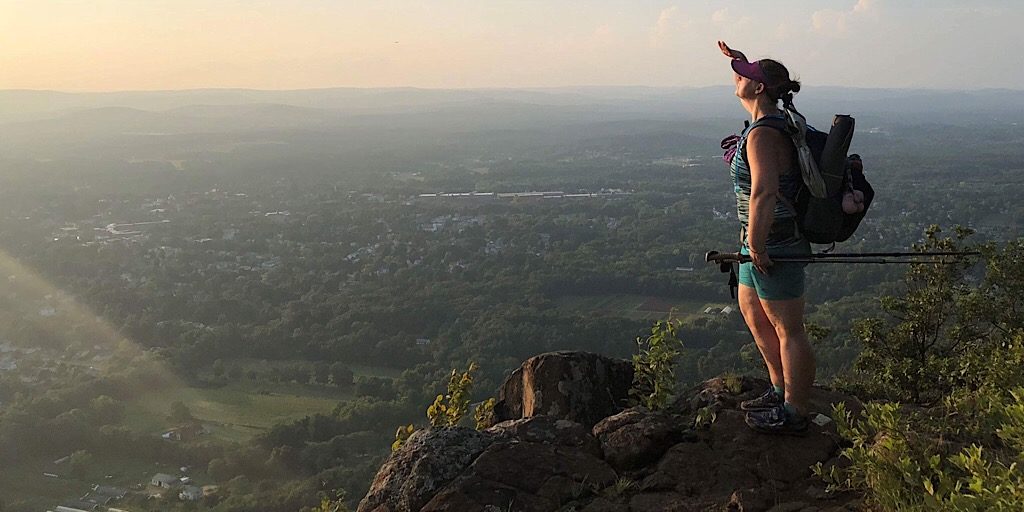 Sunset from the 1202′ Mt Tom in Massachusetts. 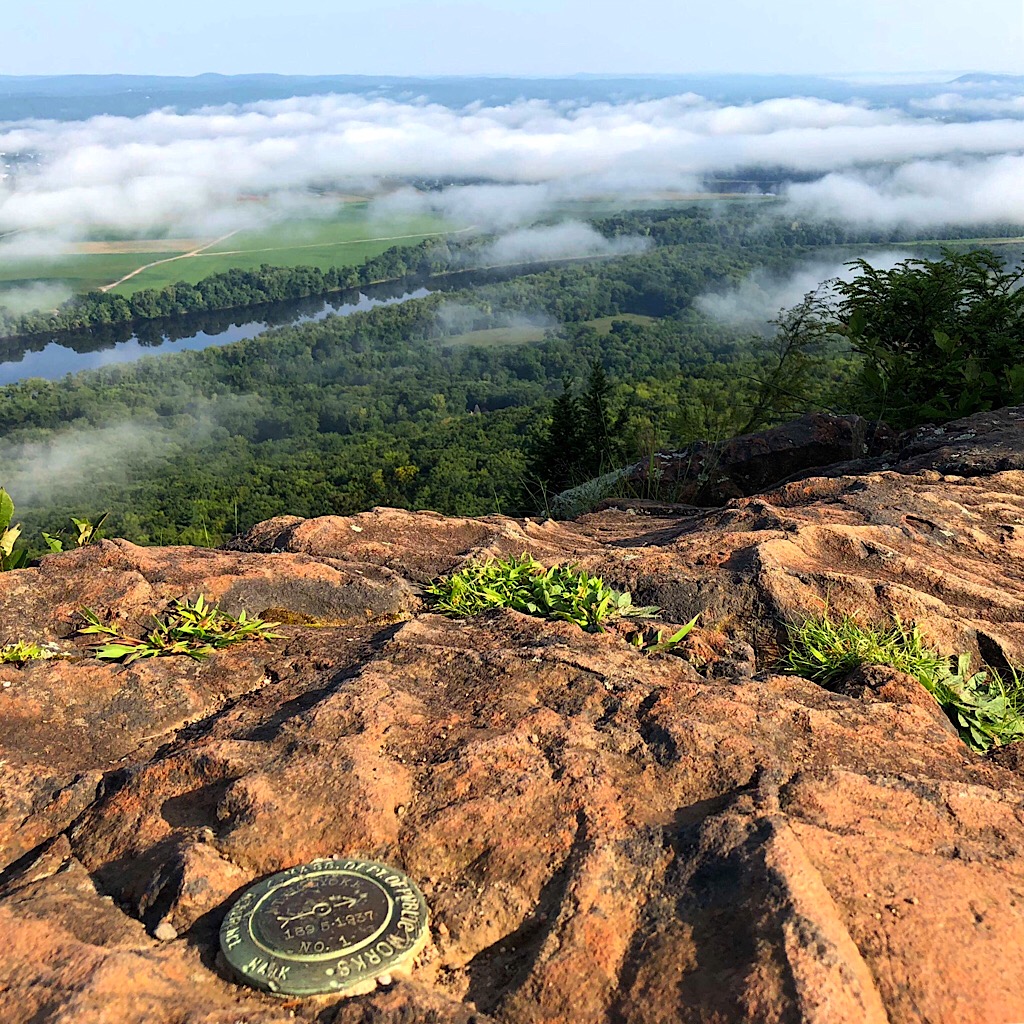 The view from the 935′ Mt Holyoke in Massachusetts. 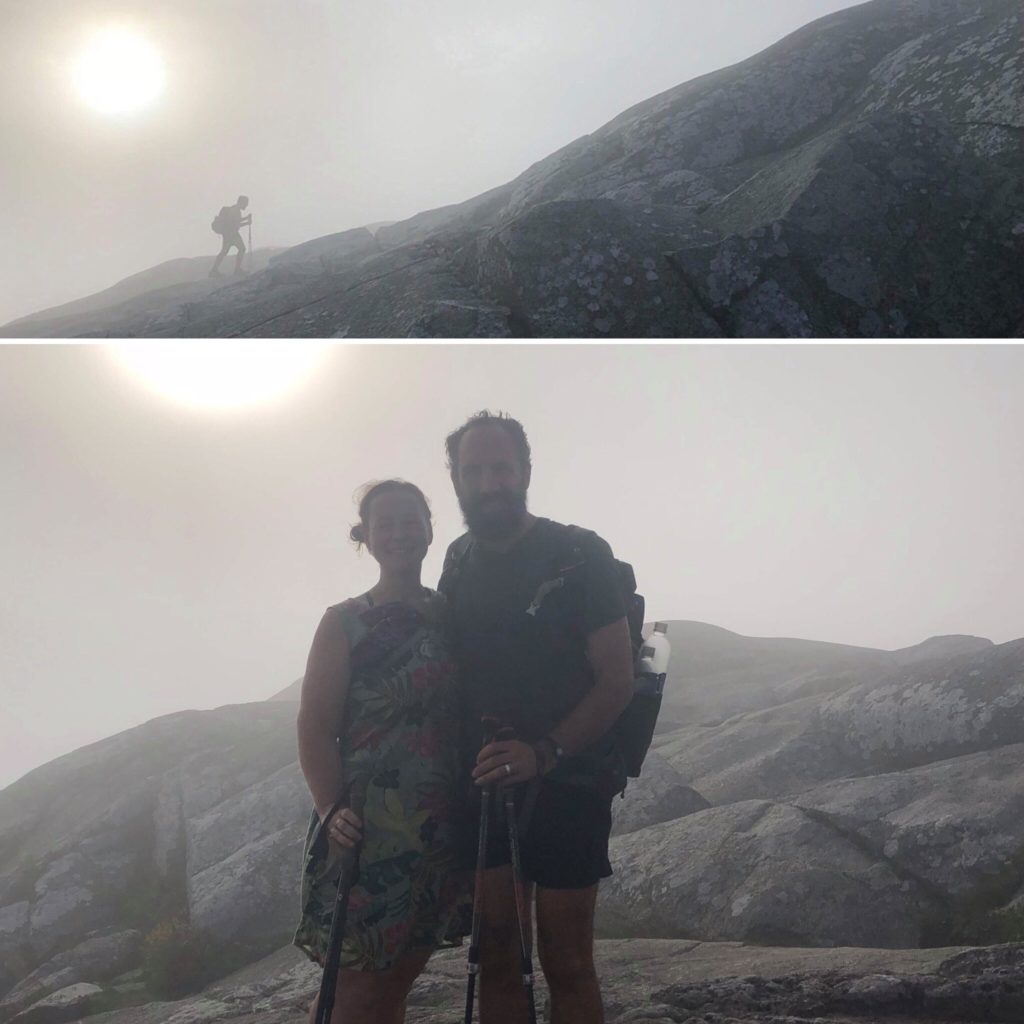 They included the entire Metacomet-Monadnock trail for a more epic finish on top of the 3166′ Mt Monadnock in NH.

Jeffrey: Hiking from France to Italy

Hiking in France and Italy, Jeffrey covered 112 miles over nine days (out of 12 days total), averaging 12.5 miles per hiking day. He described it as a wonderful adventure with literally a spectacular view at each mountain pass they came to. They had three rest days on the hike. The total elevation gained was 31,286 feet, and average of 3,464′ per day. The longest single hiking day was from Les Chapieux (5118′) to summit of Col de la Seigne (8255′), then on to La Pauld, some eighteen miles with three mountain passes. That hike took them eleven hours; it was exhausting. The scariest part of the hike was as they took an optional detour over the Cheserys Cain via “Passage Dangereux” (7295′) which involved a series of twelve ladders and chains at 5,674 feet. 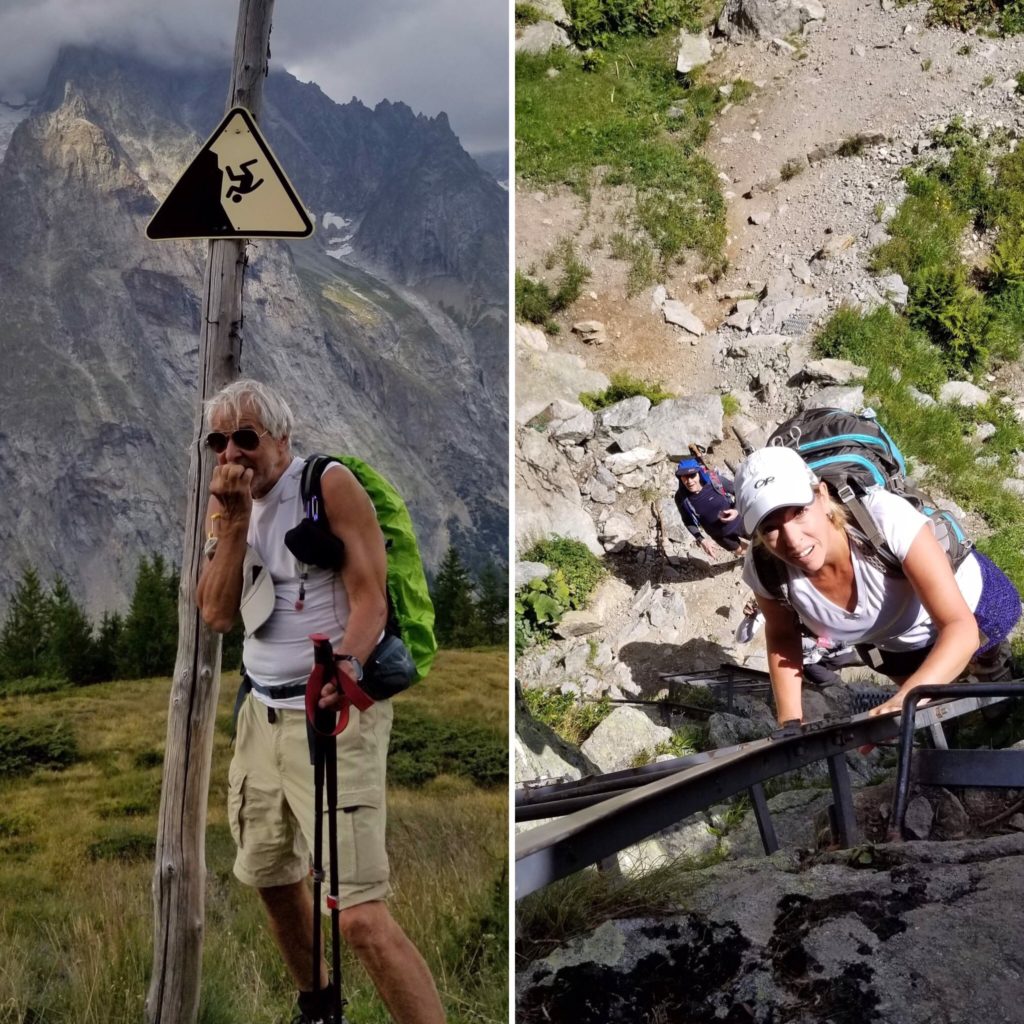 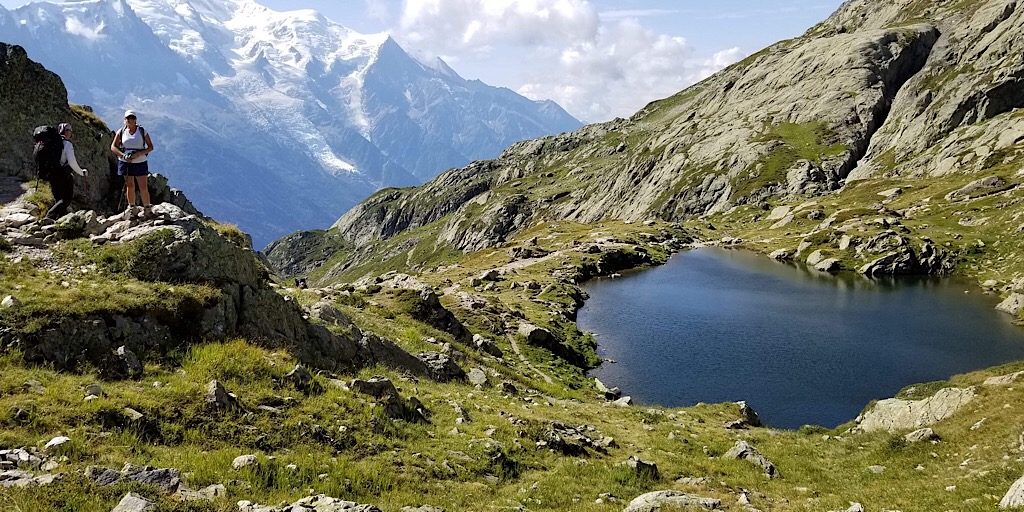 The alps are jaw-droppingly beautiful. 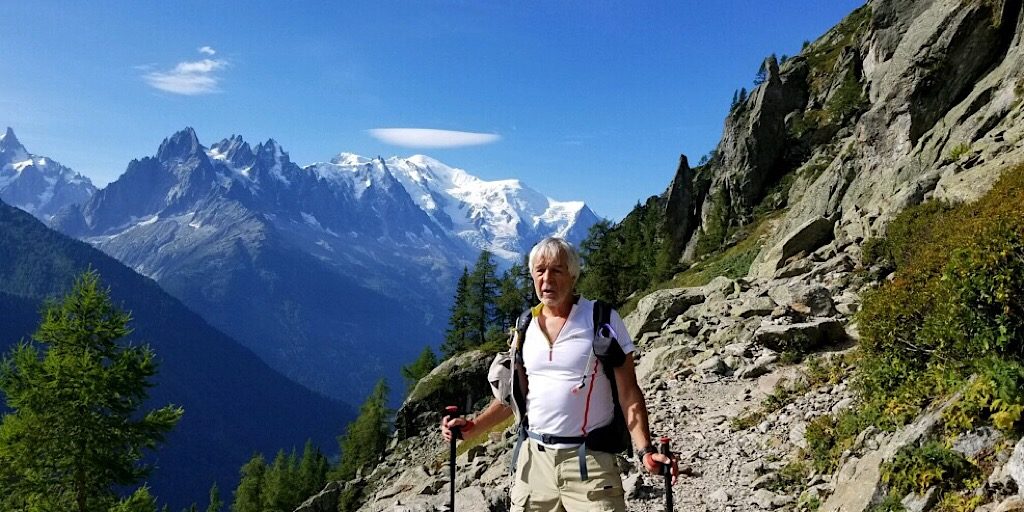 Jeffrey standing in a good place. 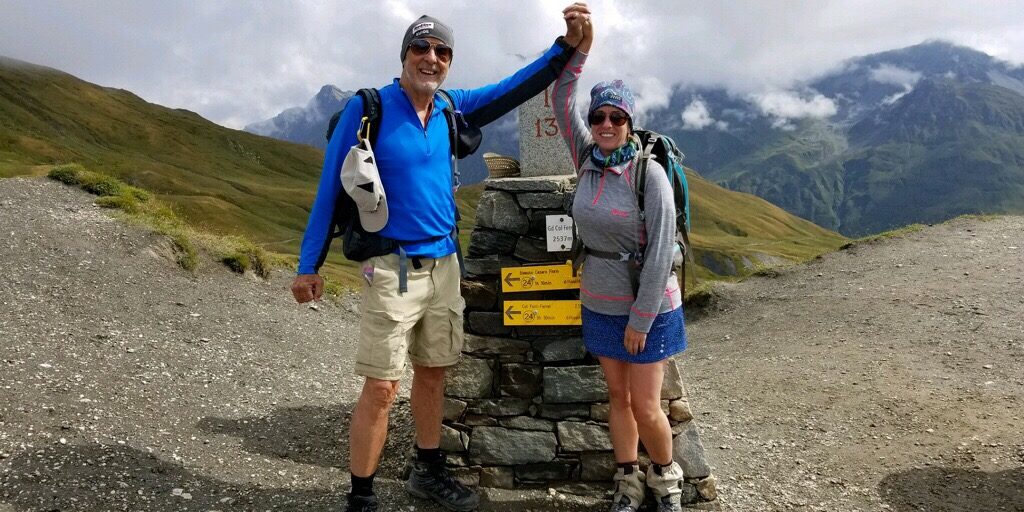 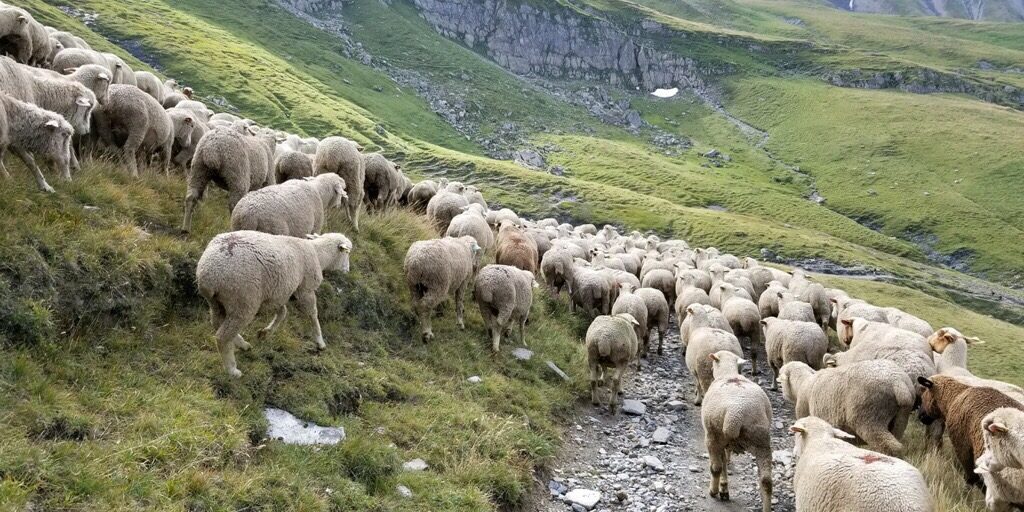 Stuck in traffic behind about 500 sheep on their way to the Col de la Seigne. 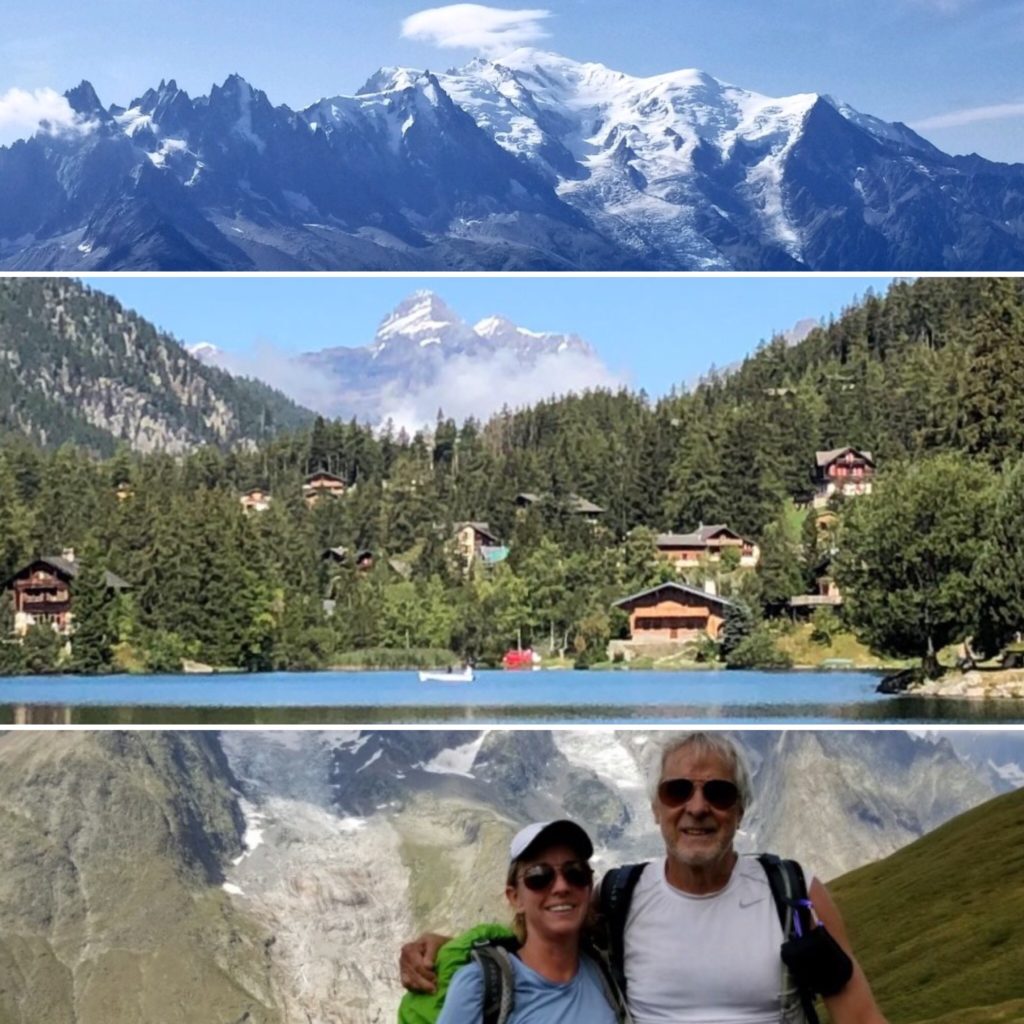 Ryan flew west to try his hand at summiting the 14,410′ Mt Rainier using one of the big outfitters that serve that mountain specifically. After the standard training covering mountaineering, roped travel on glaciated terrain, and more (links go to our courses) over several days, he was ready to test himself on the mountain with others he was teamed up with. Which, as he tells us, was two fewer than had started by the time they got to Camp Muir. From here we will let Ryan tell it. 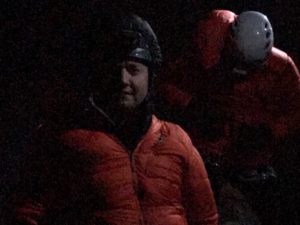 During our summit bid.

After leaving the Paradise Ranger Station, we reached Camp Muir at about 1:45pm where we settled into the accommodations for a few hours and repacked for our summit bid. After dinner we tried to get some rest [even though it was only] 6:00pm since we knew our wake-up call was coming soon. We were woken up at 11:00pm (even though most of us didn’t really sleep much), had something to eat, hydrated, and got ready for our midnight departure from Muir [over] the Cowlitz Glacier. We took our first break on Ingraham Flats [a compression zone on the Ingraham Glacier] throwing on our parkas to stay warm. We hydrated and ate some snacks. It was at this point our rope teams had to do some maneuvering as two more members dropped out and had to be guided back to Muir. From there we moved up Disappointment Cleaver having one ladder to cross a large crevasse and to jockey around some others. During our ascent the winds had picked up and were swirling from all directions. I was feeling strong as we came to our next break at the top of the Cleaver [~12,400′]. It was 3:00am and we were still on schedule even with the setback from earlier and the weather picking up. At this point the guides had huddled to discuss the 40mph winds and rim clouds and the decision was made to end the climb at that point and return to Camp Muir. The decision was a huge disappointment, but I respected it as the times come when we as guides have to make the decision to abandon the summit bid in order to the party safe as well. Getting to the summit is optional getting down is mandatory. So, we made our way down to Camp Muir and were able to catch the sunrise. We took a break, packed up, and headed back down the snowfield to Paradise. —Ryan

Here are a few photos he provided. 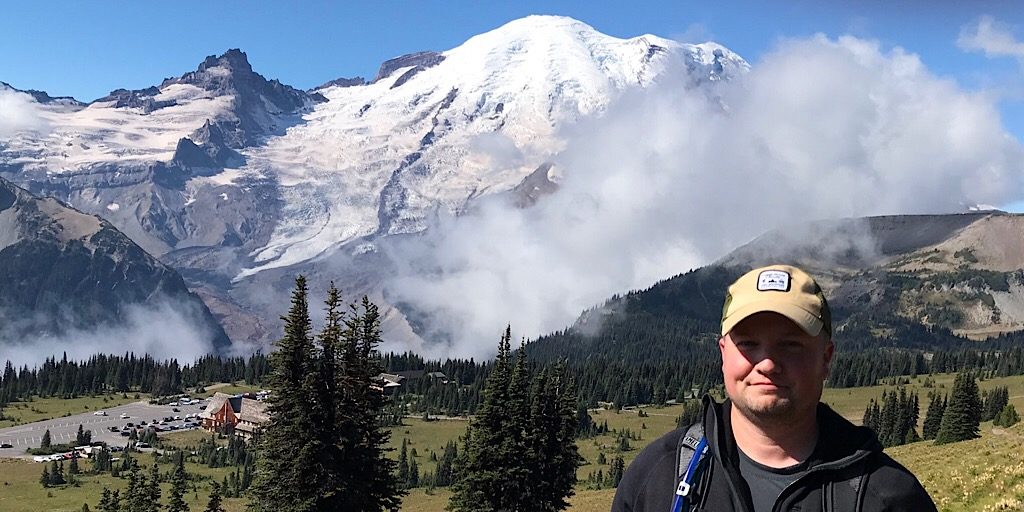 Starting at around 5400-feet, the summit is right there! 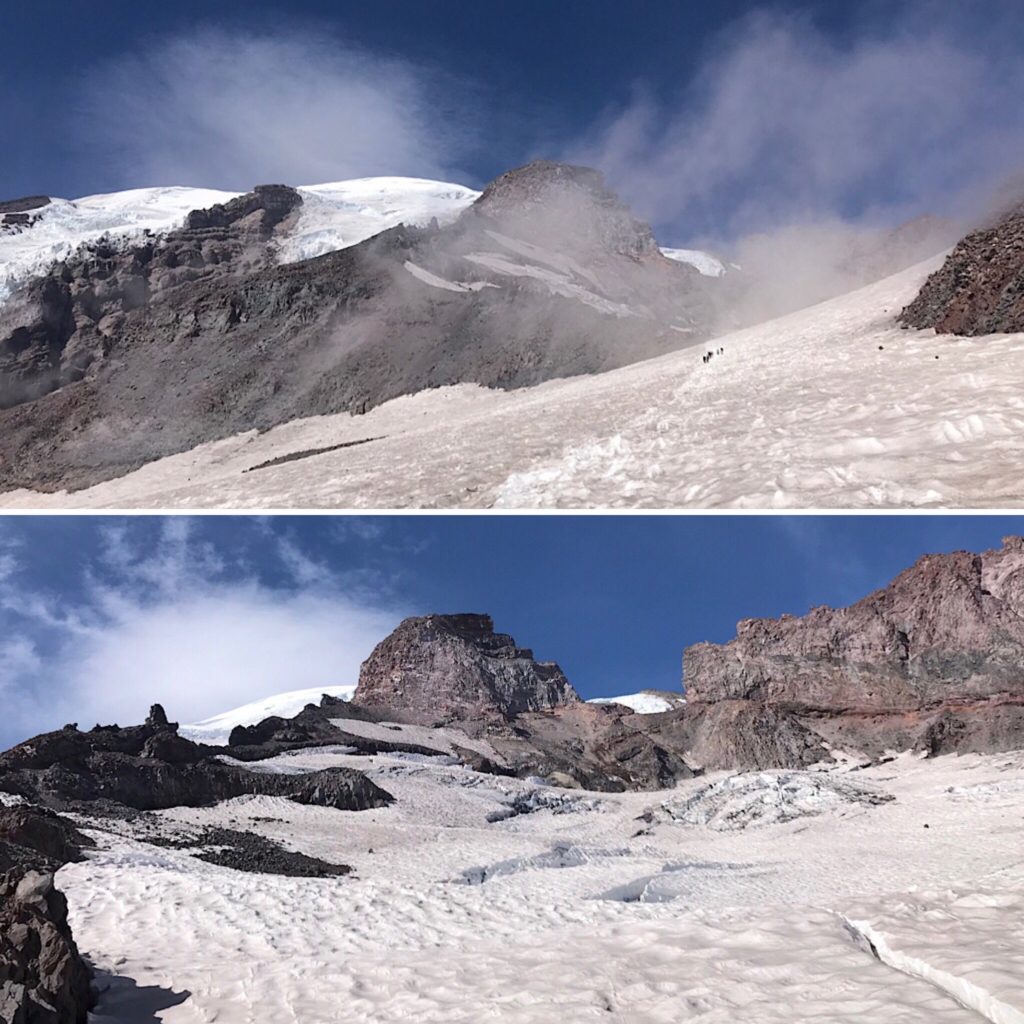 Looking up toward the partially obscured summit from near Moon Rocks (~9500′) approaching Camp Muir (10,000′) (top); view from Camp Muir of the top of the Cowlitz Glacier, Cadaver Gap, and part of Gibraltar “Gib” Rock (bottom). 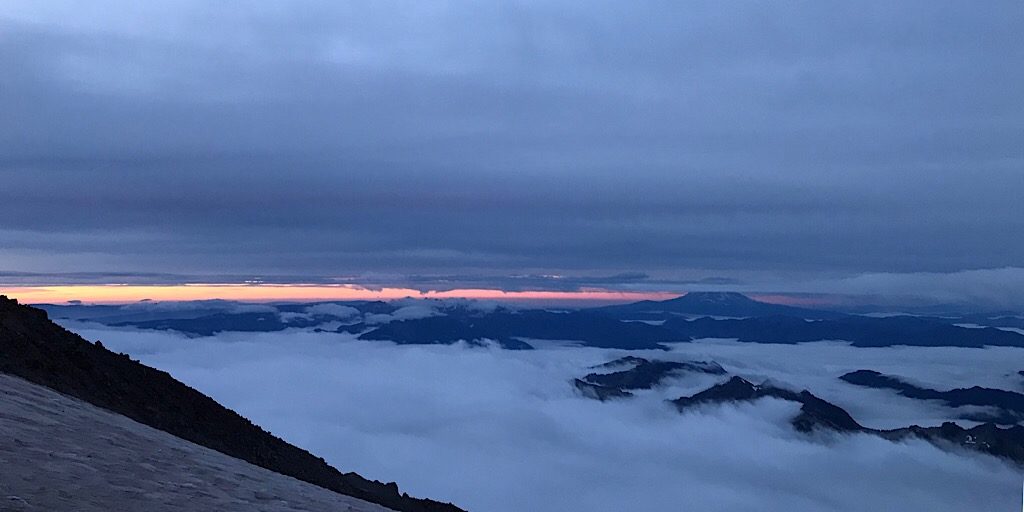 Turned away this time, they retreat to the dawn of a new day.

Well done one and all. Whether you met your goals on your latest trip or didn’t is irrelevant. What is relevant — and awesome — is that you were all out there doing what you love. On that, congratulations!