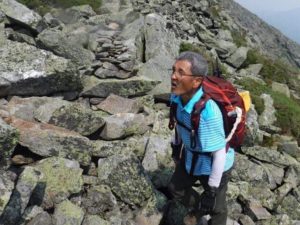 Earned it and feeling elated.

That’s what we were asked first thing in the morning: “Can you supply a guide for me today? I would like to ascend Huntington Ravine.” Quite the question to wake up to but Redline Guide and owner Mike Cherim responded by saying “okay” — despite having gone to bed at 2:00am and needing to make a must-do phone call at around ten. Fortunately his wonderful wife, Barb, offered to make the call making the gig possible.

Fortunately, being a SAR volunteer, Mike — who, by the way, really finds it weird writing about himself in the third person — was mostly packed and ready to roll (though hours later he would realize he left his lunch spoon at home… damn). Still, being so unplanned, the preferred early-start-to-avoid-the-heat wouldn’t be possible. Mike and our guest, Insoo, a spry sixty-year-old Korean-American fellow, were able to get on trail only by 9:30am. And by “trail” we mean the John Sherburn CCC Ski Trail, a.k.a. “The Sherbie,” because the beginning of Tuckerman Ravine Trail is closed thanks to bridge construction. 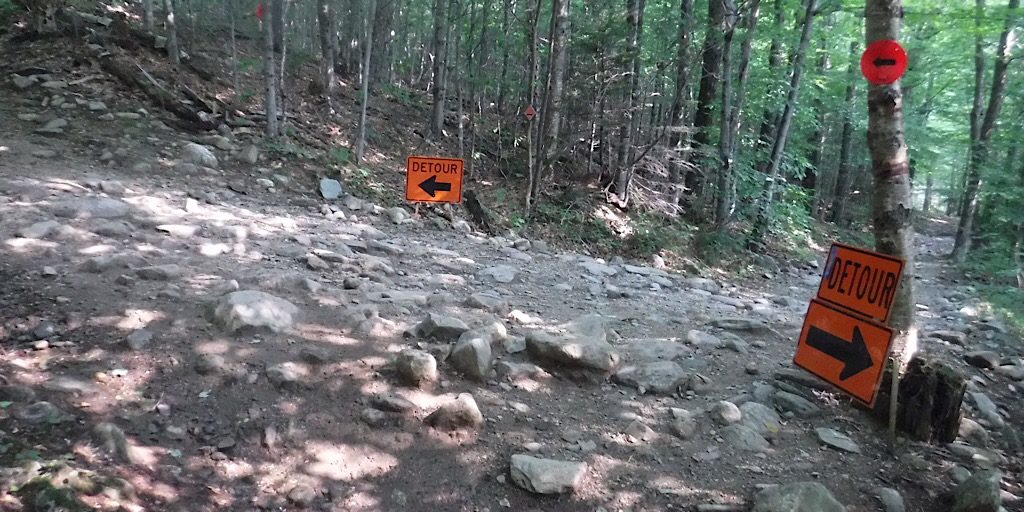 Do this, don’t do that, can’t you read the sign?

In the last paragraph we mentioned that our guest, Insoo, was “spry.” This is to say the least. Mike led a man who, like himself, has a long stride and fluidly bounds along the tops of rocks. The two made it to the Huntington Ravine Trail junction in only thirty minutes. This can normally take and hour or more. This would be fun. Mike, not having hiked hard for a while due to some post-op downtime, though, told Insoo that from here on out the pace would slow and become more sustainable. 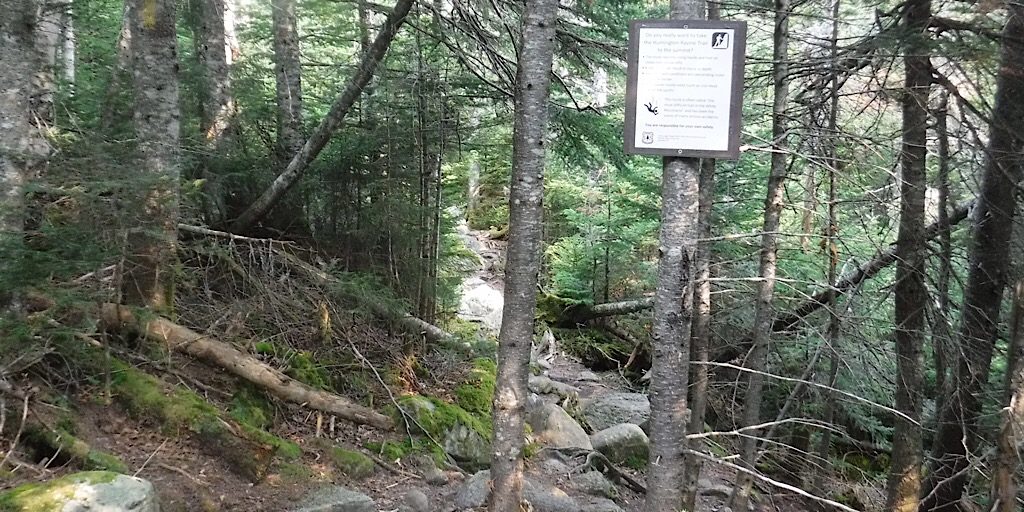 The duo continued upward, still making decent time despite the heat and humidity. The trail was now less road-like and more trail-like. It’s actually quite lovely — though it does have a serious ending the forest service warns about. Huntington Ravine Trail, after all, is reputed as being the “the most difficult regular hiking trail in the White Mountains” according to the AMC’s White Mountain Guidebook. They use “regular hiking trail” loosely, in our minds. The route up is precise, precarious in places forcing one to make tenuous and uncomfortable rock climbing moves, and it’s “heady.” It does crown the Terrifying 25 list. That said, it is also a fun and exciting albeit challenging way to the top. 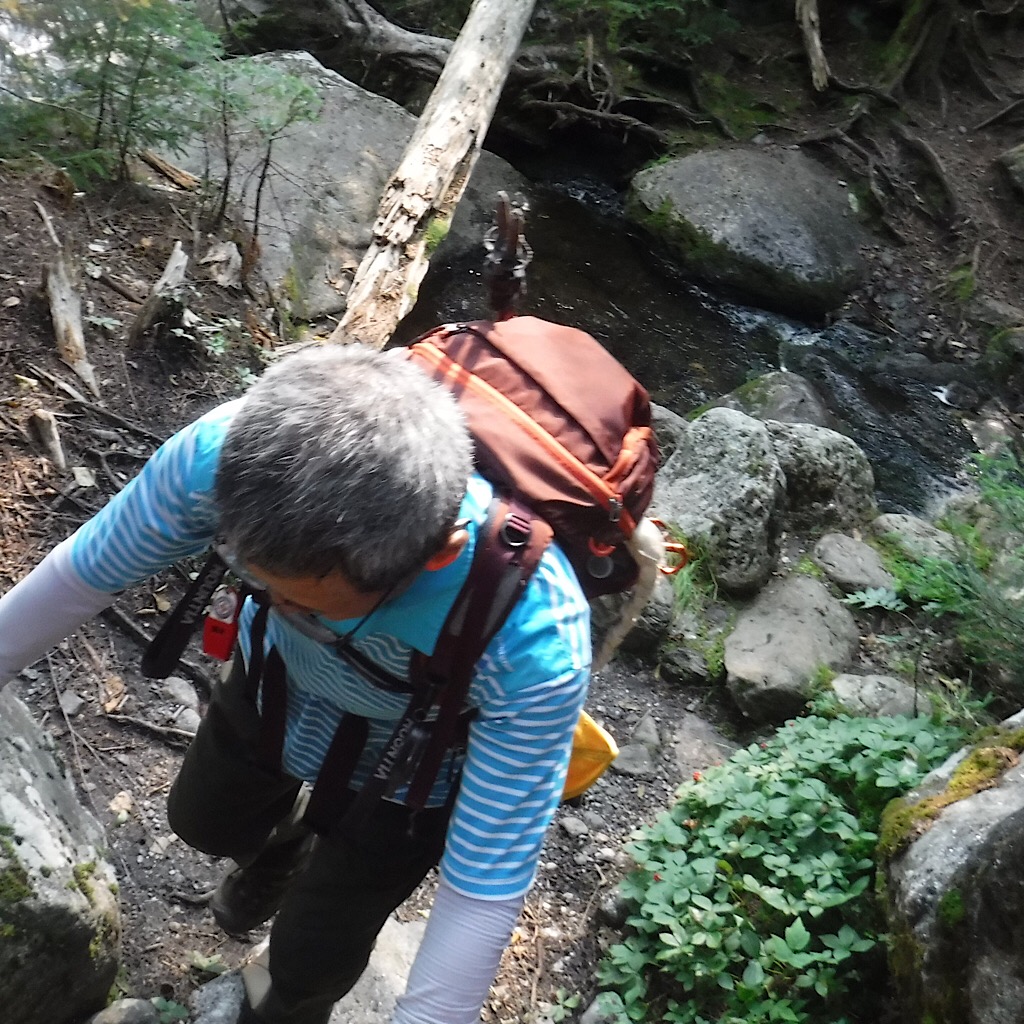 Insoo on the Huntington Ravine Trail. 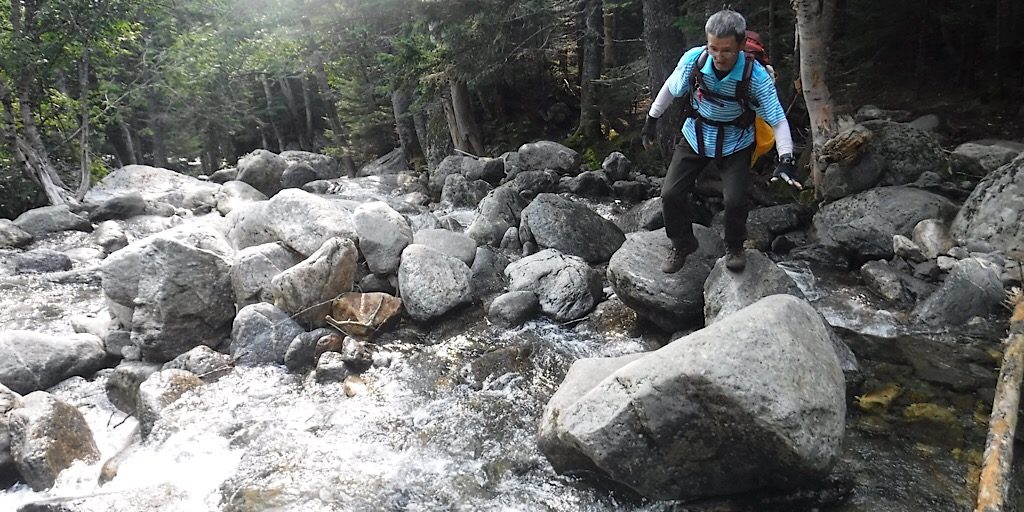 The crossings were handled with ease. 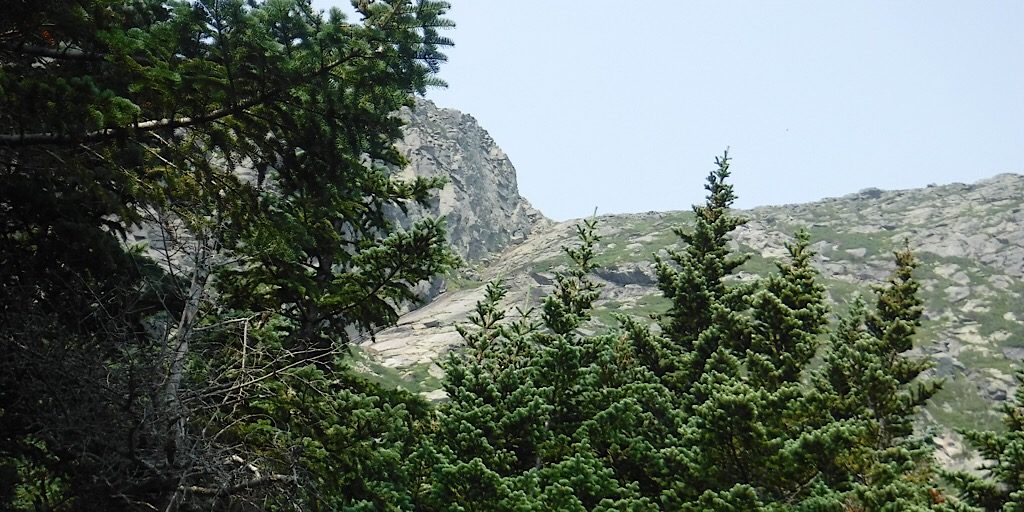 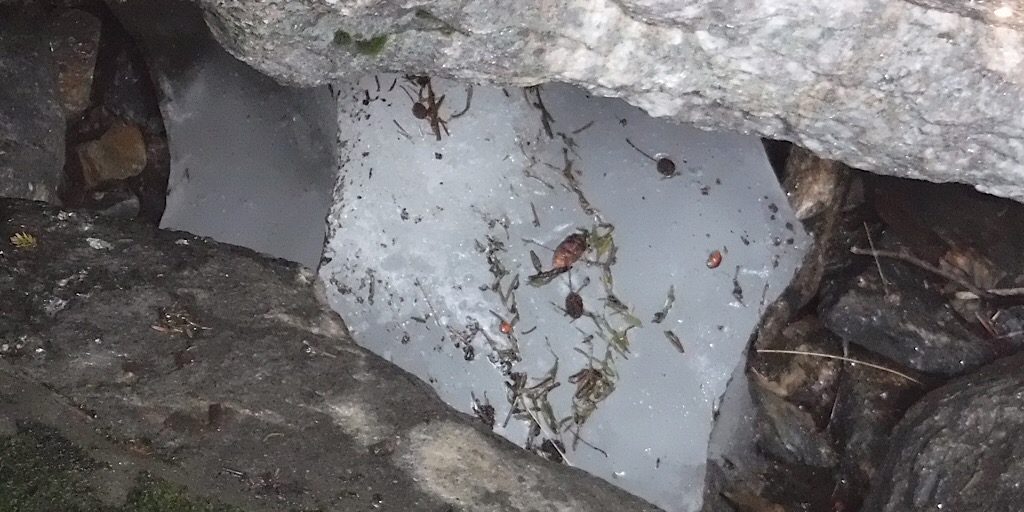 August going on to September and the ice is already in 🙂 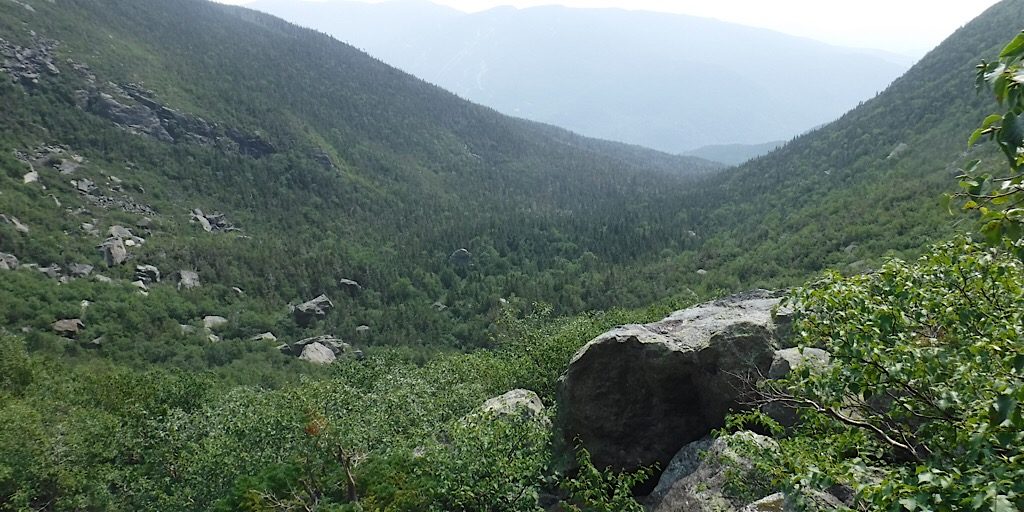 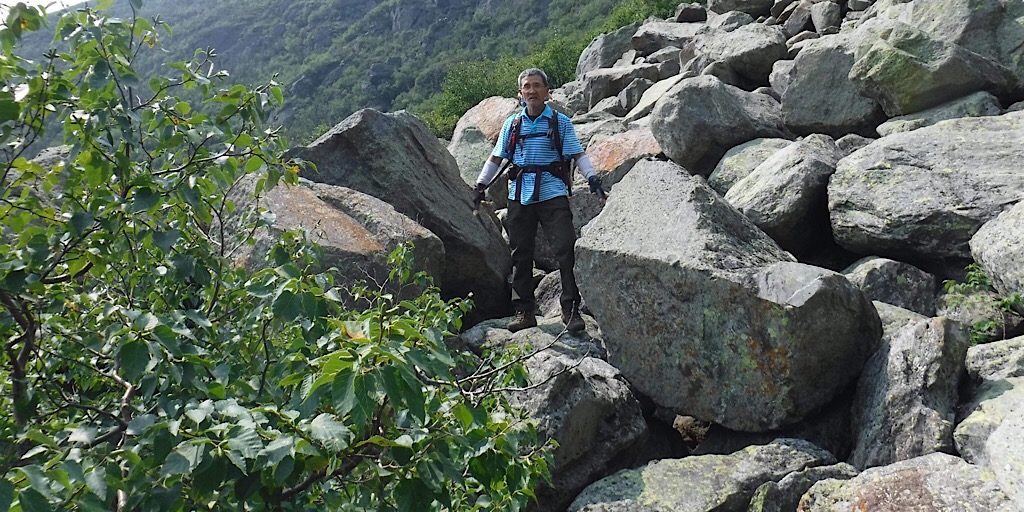 As is typical, there were very few hikers in Huntington — some tiny specs way above is all. It’s nothing like Tuckerman Ravine in terms of visitor numbers. This is a good thing because it can be a dangerous place. Lots of people, in fact, run afoul in Huntington Ravine and require help. They can’t follow the trail very well then find themselves in a place they shouldn’t be. Our duo saw this today, in fact. A shadowing solo hiker caught up to them and they confirmed he wasn’t on Tuckerman Ravine Trail. They later saw him well off trail right after the start of the fan. That is an optional although unmarked way to climb said talus slope, but that wasn’t his intention. When he saw our pair he diverted toward them getting back on trail. 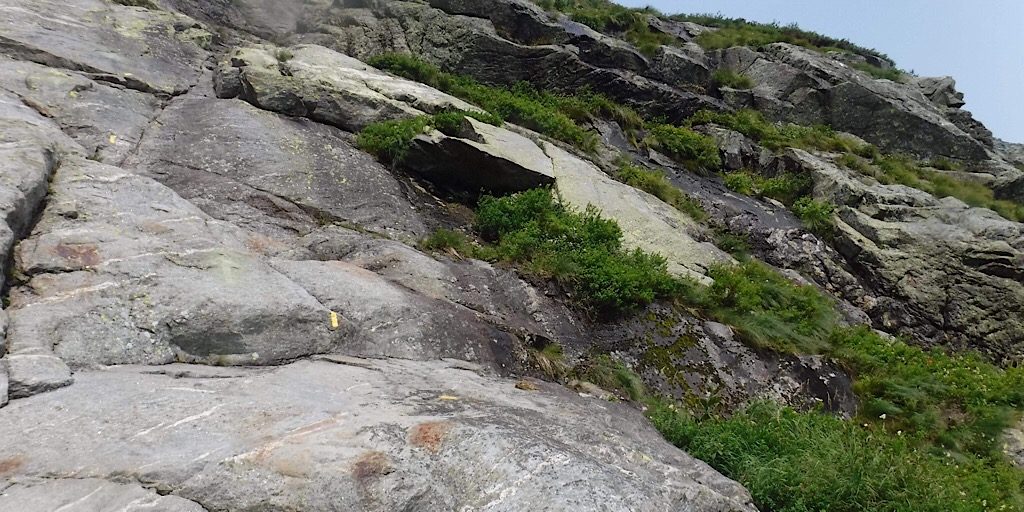 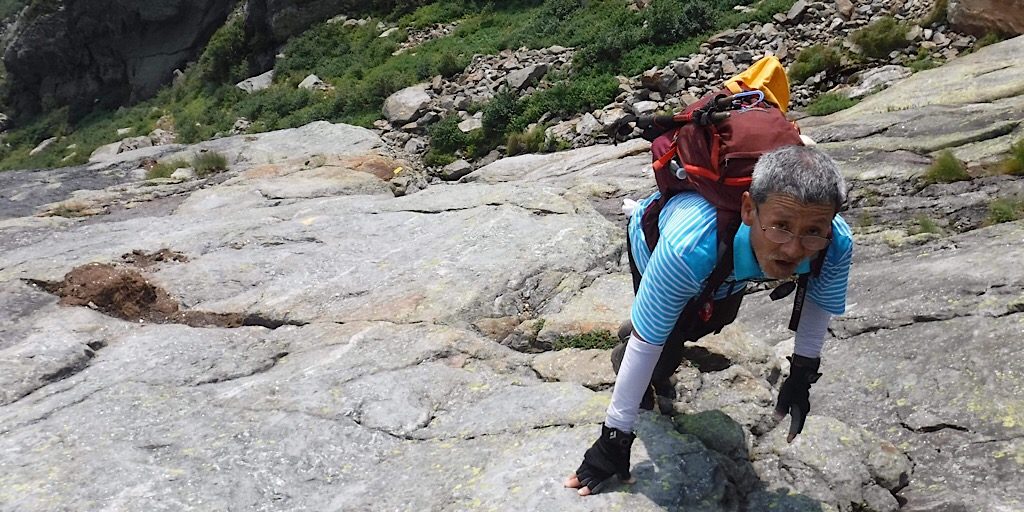 Insoo is enjoying this. 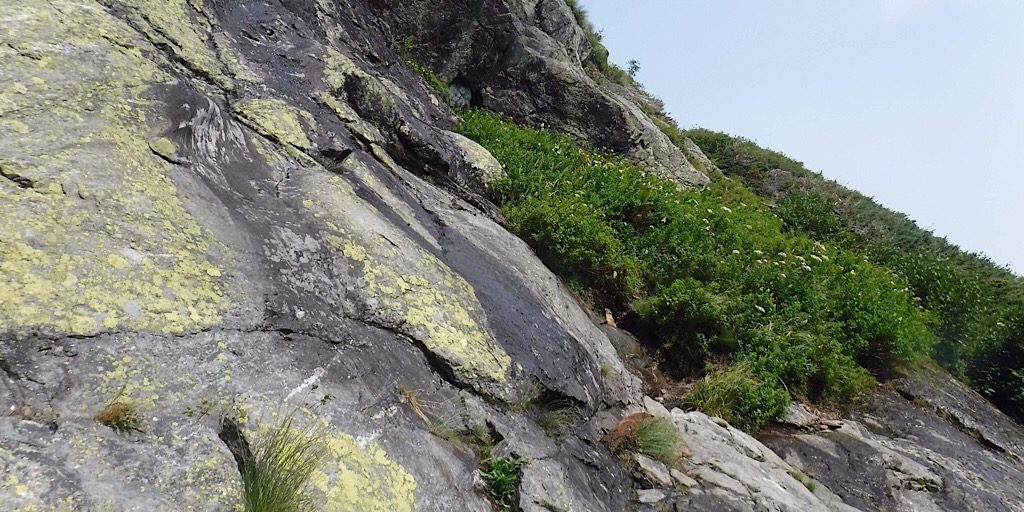 What would a hiker from Alabama think of this trail?

Later on, while perched atop “The Fan” and resting up for the climbing ahead, Insoo noted that their shadow hiker wasn’t to be found. Mike finally spotted him on the slab well above the route and called to him to go back. The fellow considered it but now going back was too sketchy so he persisted. He soon changed his course once again, though, aiming for the trail. His traverse was pretty scary he later told us and sort of stuck a little closer to us after that. Our duo was fast, though, blazing through the various cruxes and finally The Chimney, so again they got ahead of him. Mike called down to him a couple of times to help him stay on route and stay safe. Our team waited at the top, in fact, just to make sure the fellow made it up. He did, thankfully. Talk about a trial by fire. This twenty-something surely made it to the summit as he was determined to do. 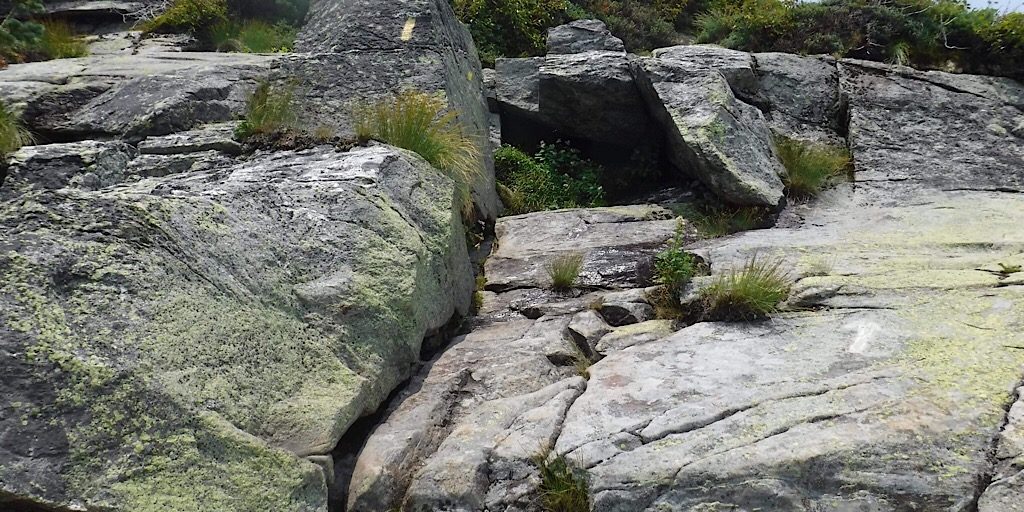 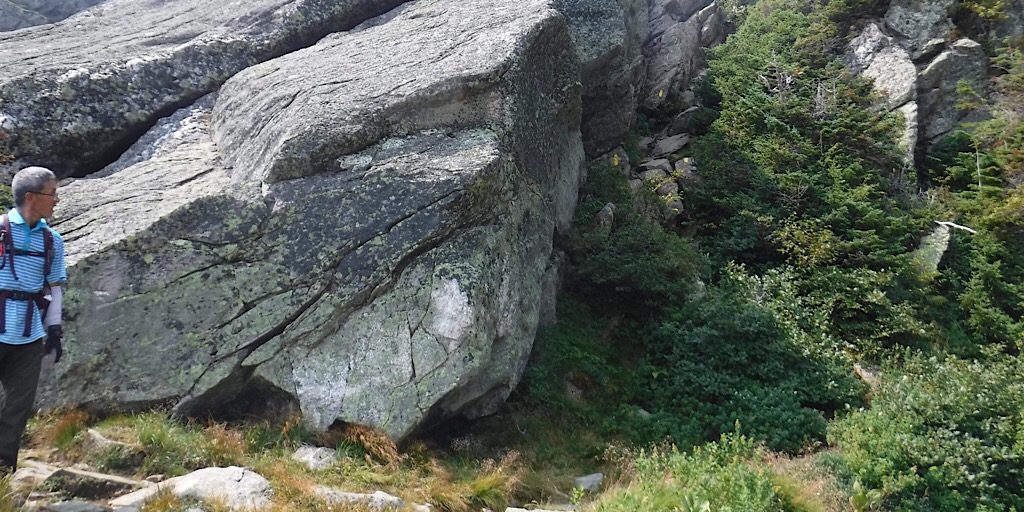 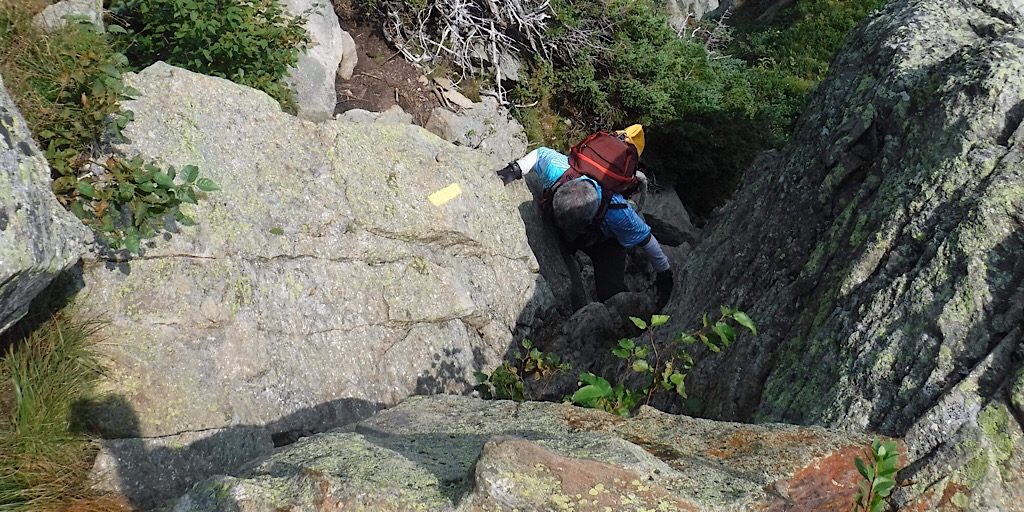 Climbing The Chimney to finish the tough stuff.

Our team, very satisfied with their ascent, rested a bit by the junction. Coincidentally Insoo met a Korean fellow there, someone who came down from the Auto Road, and chatted with him as we enjoyed the cooling breezes and sunshine (up there it felt great). Small world. Soon after we started our way down the Alpine Garden Trail toward Lion Head, somewhere above us the sounds of traffic and machinery overwhelmed the wind. We weren’t going to the summit and nobody was missing a thing. Insoo had already summited six times, and Mike has ninety summits under his belt. They enjoyed a stroll though the Garden instead. 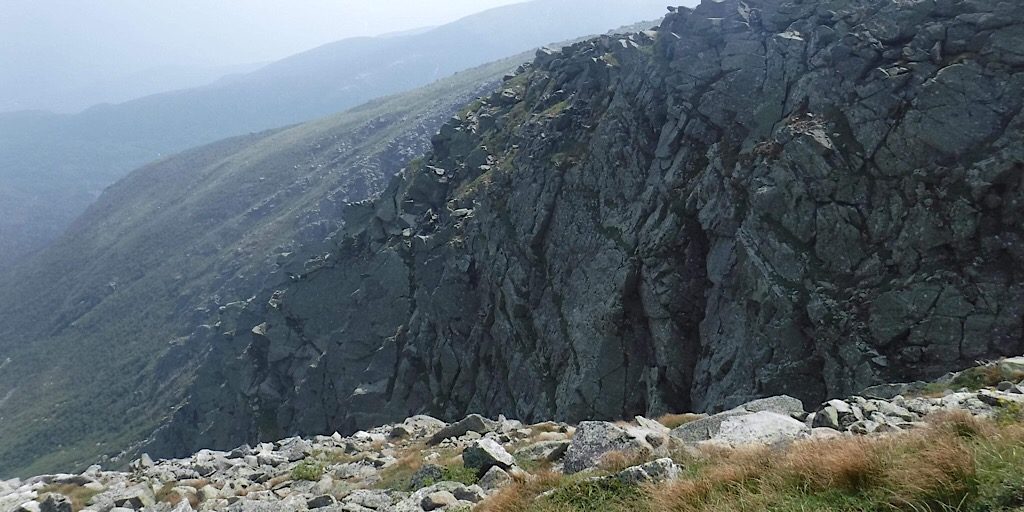 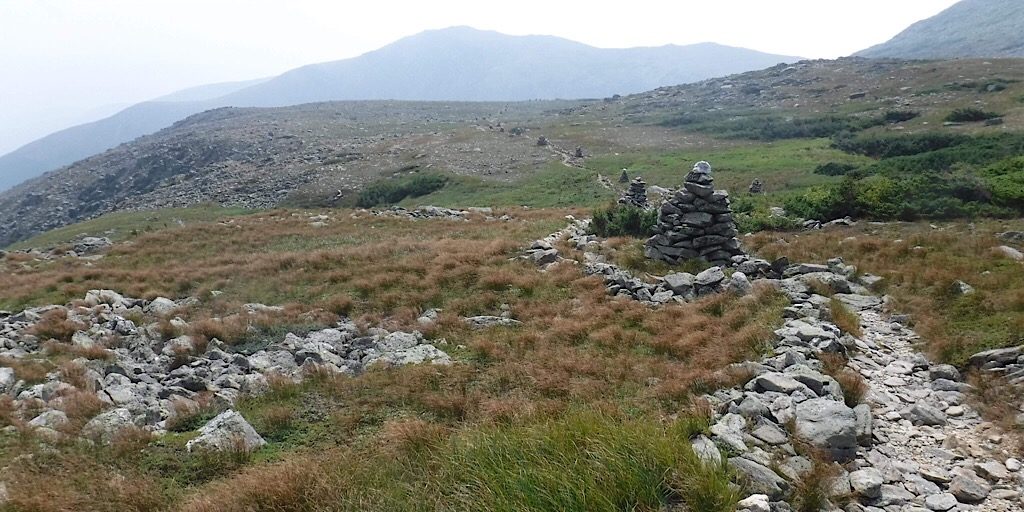 The Alpine Garden stretches out before them. 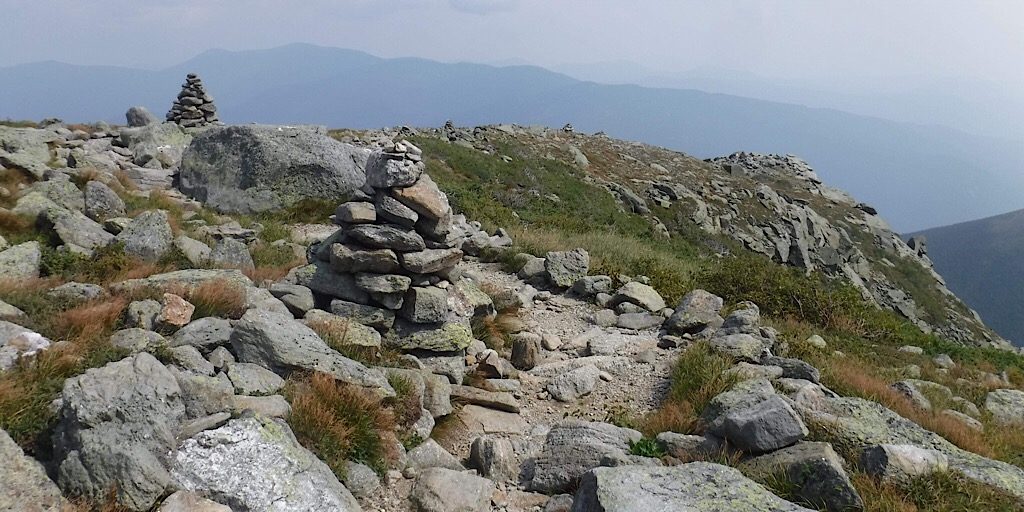 Soon they were on the Lion Head Trail and making their way toward Lion Head itself, then treeline 0.4 miles later. At the winter/summer junction the two took a right and descended another four-tenths making their way toward the Tuckerman Ravine Trail. There, thanks to the construction of a second bridge, they had to detour up trail to HoJos and the upper end of The Sherbie. Once on it and descending again getting on then off Tuckerman Ravine Trail again, they quickly made it down to the Pinkham Notch Visitor Center a mere six hours after they began. There, as new friends, they parted ways with tentative plans for a return visit in the winter. 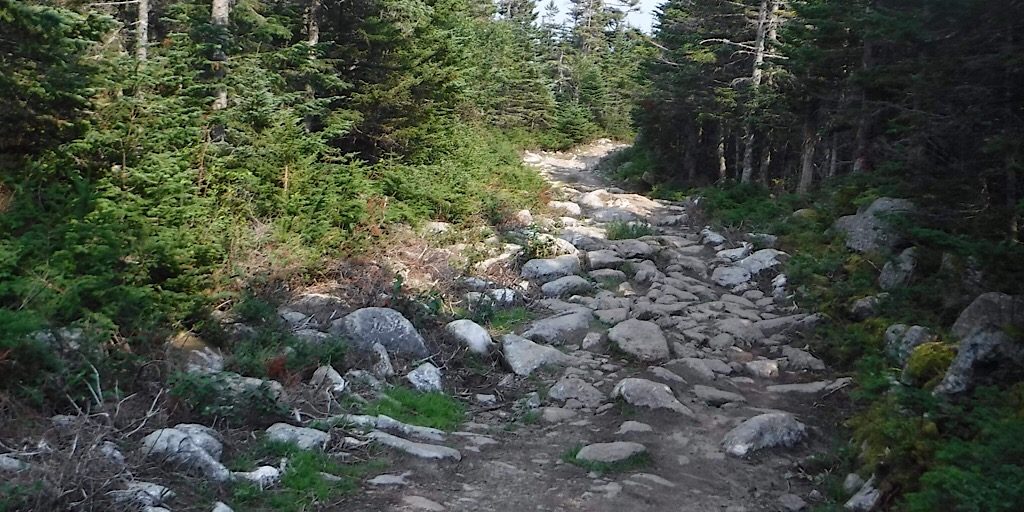 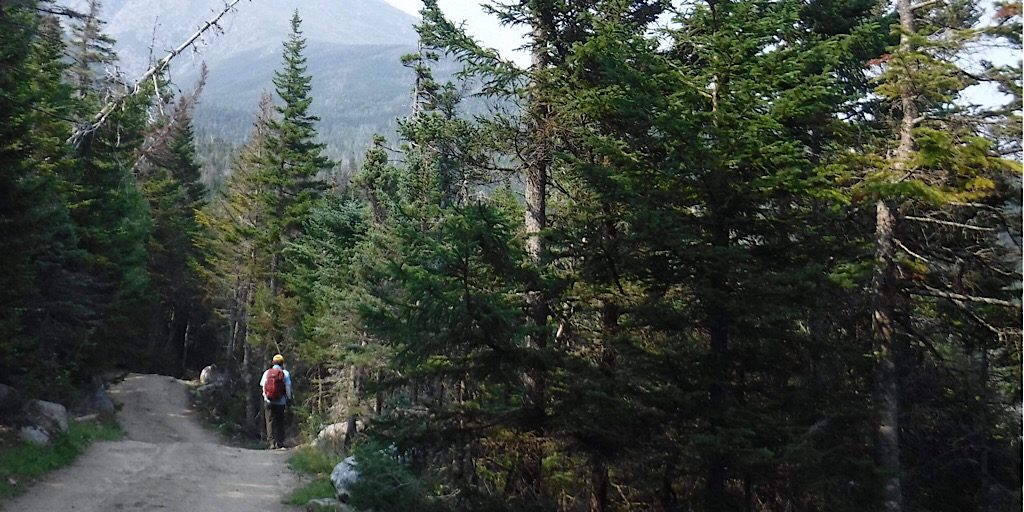 One of the crossovers.

Congratulations Insoo! Thank you for choosing Redline Guiding (and to IMCS for the referral). Great job team!