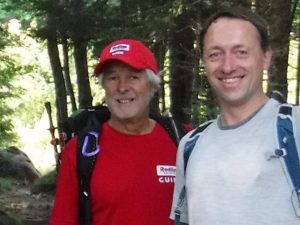 Starting with enthusiasm. Photos by Jeffrey.

A fellow named Florian from Hamburg, Germany, wanted to see some of our mountains, specifically hoping to visit our high peaks in the process of completing a Madison-to-Jackson (Full) Presidental Range Traverse. Moreover he was hoping to become educated about our flora and fauna… a nature tour. And he was looking to accomplish this in a relaxed manner. Utilizing the AMC Huts over the span of four days and three nights made the most sense allowing Florian to become fully immersed in the alpine and hut experience. We decided a north-to-south traverse would be a good way to do it, even though by the numbers it means more elevation gain, it is psychologically easier. That is, however, subjective. Anyway, we had four days to work with and here’s how we used them.

On this assignment was Redline Guide Jeffrey Shutak and really the service began even before the actual start day with Jeffrey meeting Florian at Joe Dodge Lodge ahead of time to go over gear. Being the awesome host that he is, Jeffrey also shuttled Florian to town to visit some shops and enjoy our local attractions. We loaned Florian a travel sheet with integrated pillow case for use in the Huts and he rented some poles, but he was otherwise all set gear-wise. And he was extremely excited. That’s a plus. Also a plus was that the weather forecast for the first two days looked as if it would cooperate getting them south of Mt Washington (6288’/1917m) before any unsettled weather arrived.

Mike Cherim, the Redline Guiding owner, helped Florian and Jeffrey on day one by meeting Jeffrey for breakfast at the Sunrise Shack for its 6:00am opening, then following him to the Highland Center to drop off Jeffrey’s car. From there the two drove to the Appalachia Trailhead in the company van. It was there Jeffrey would reconnect with Florian as the AMC Shuttle van dropped him off so they could begin their hike. After a few photos, of course. We had to document the beginnning of this grand adventure. Once the duo was off, Mike headed home, stopping along the way to catch some trout in a nearby river. 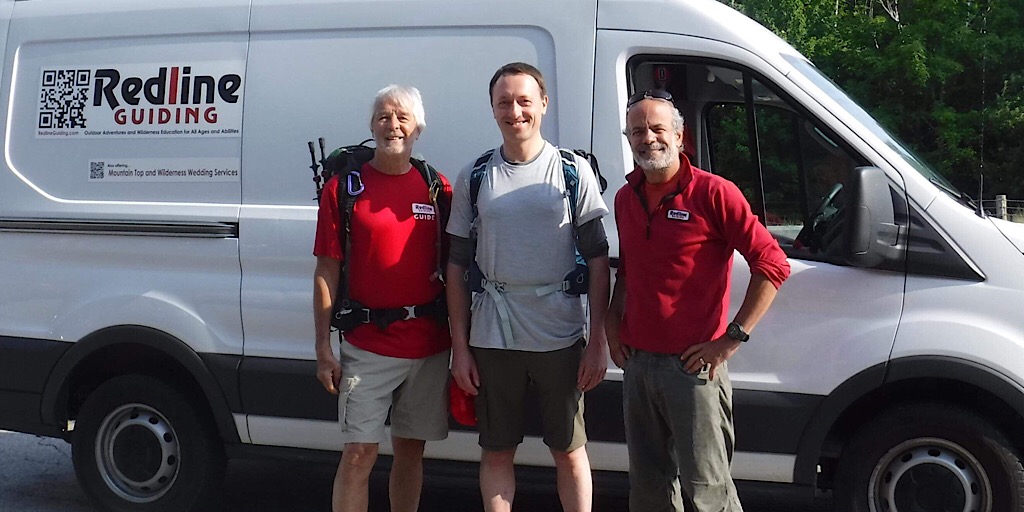 L-R: Jeffrey, Florian, and Mike. Mike was helping with the carspot since Florian wasn’t driving — and doesn’t drive in Hamburg. 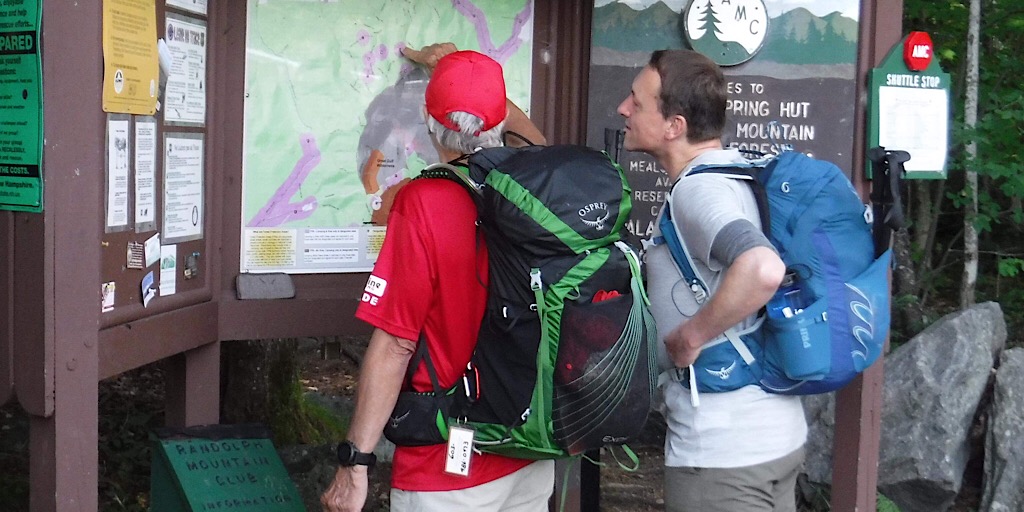 Jeffrey going over the route with Florian. They decided on taking Airline Trail to ascend. 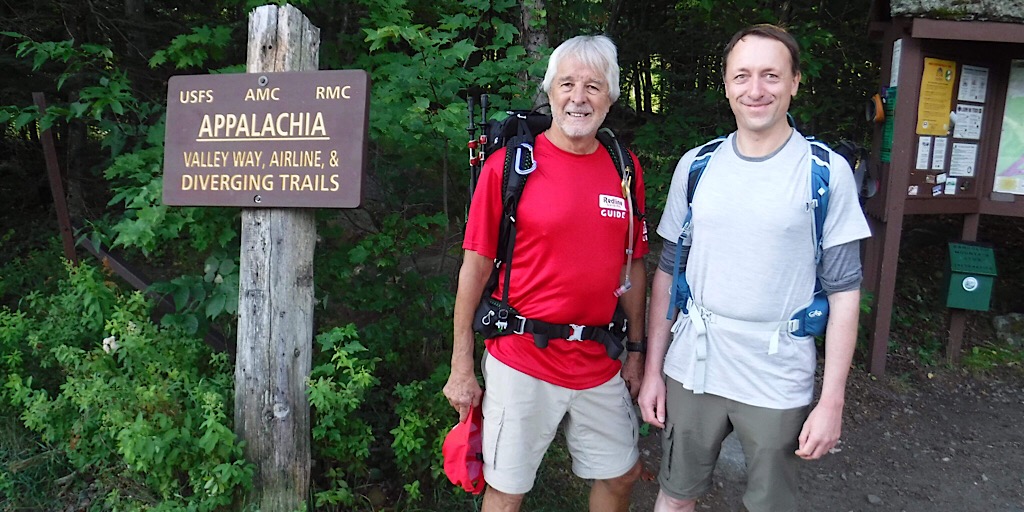 Looking clean and fresh for the start. 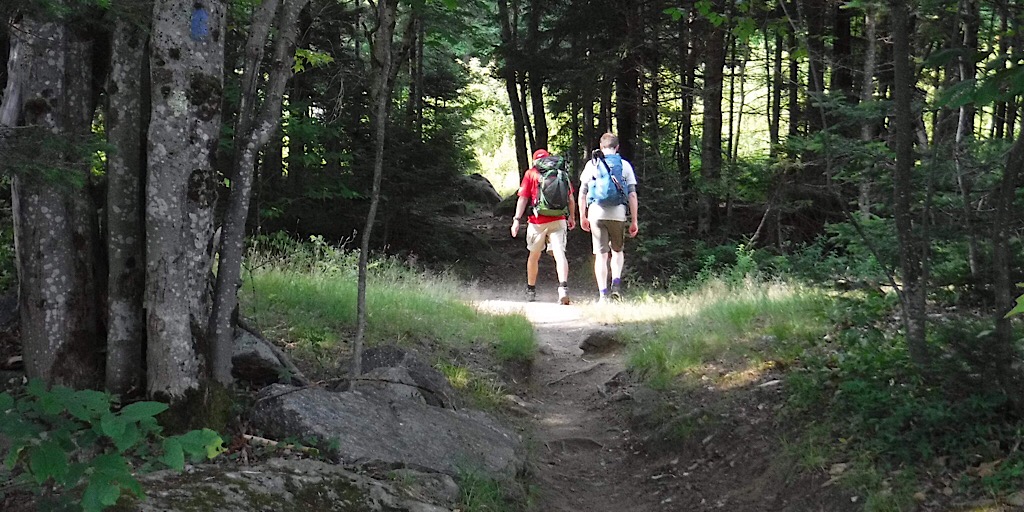 Florian was a strong hiker like Jeffrey so they made good time climbing the 4500’/1372m or so needed to get up to the cloud-shrouded summit of Mt Adams in under three hours. Jeffrey decided to take this route up because it’s better than the typical Valley Way Trail and wanted to show our guest the best. The Airline Trail jumps onto a ridge early on offering rewarding views much faster. He also decided to summit that mountain on the first day along with Madison making for less work on day two meaning they could enjoy a more leisurely traverse. This first day would be a test, though, that’s for sure. 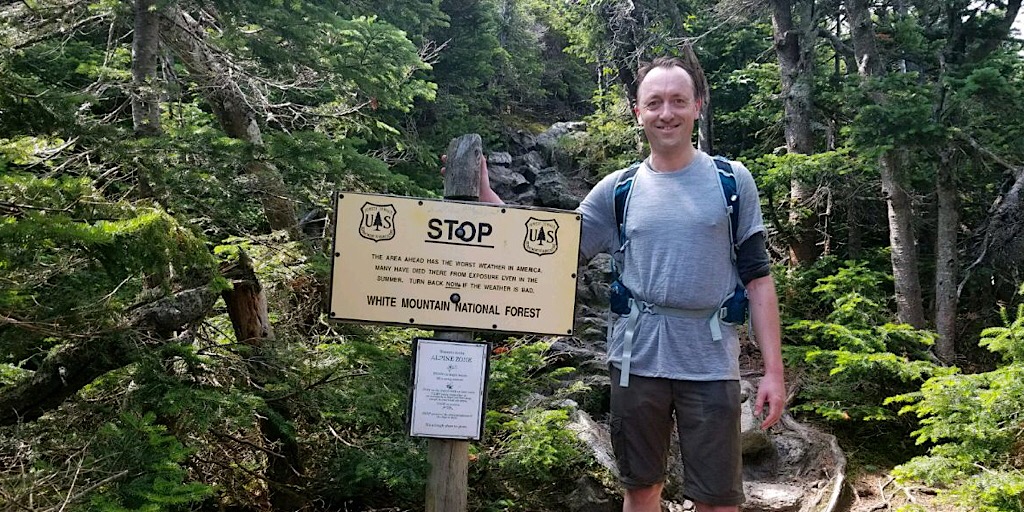 Florian poses for a photo by one of our well-known warning signs. 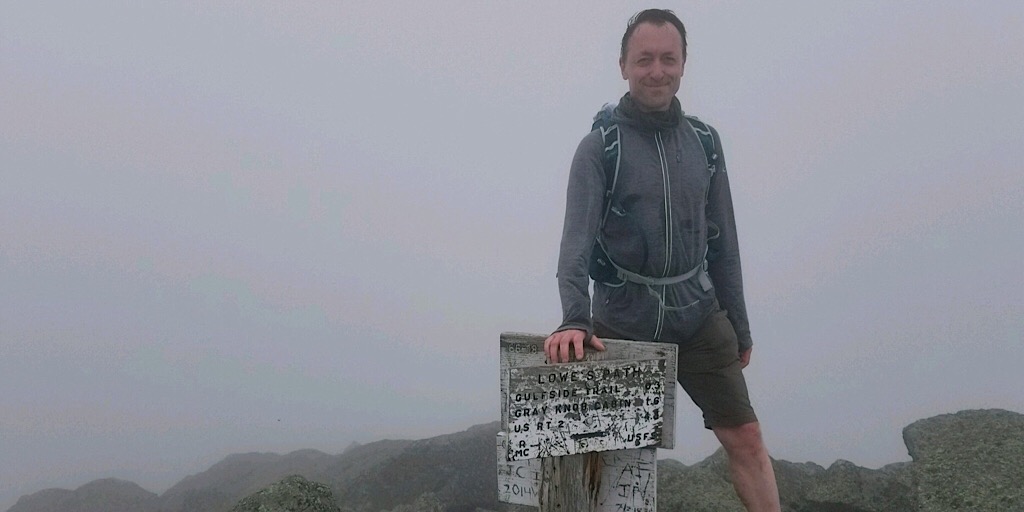 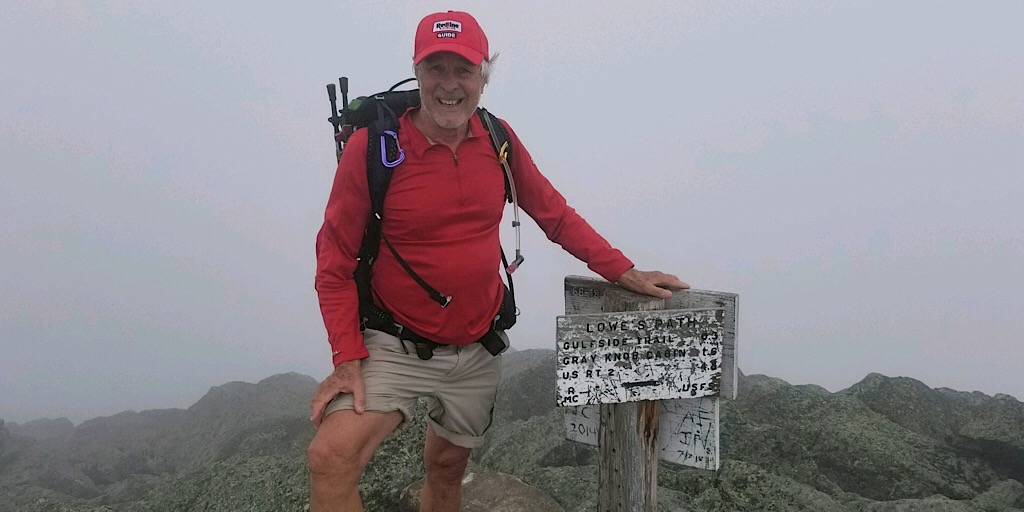 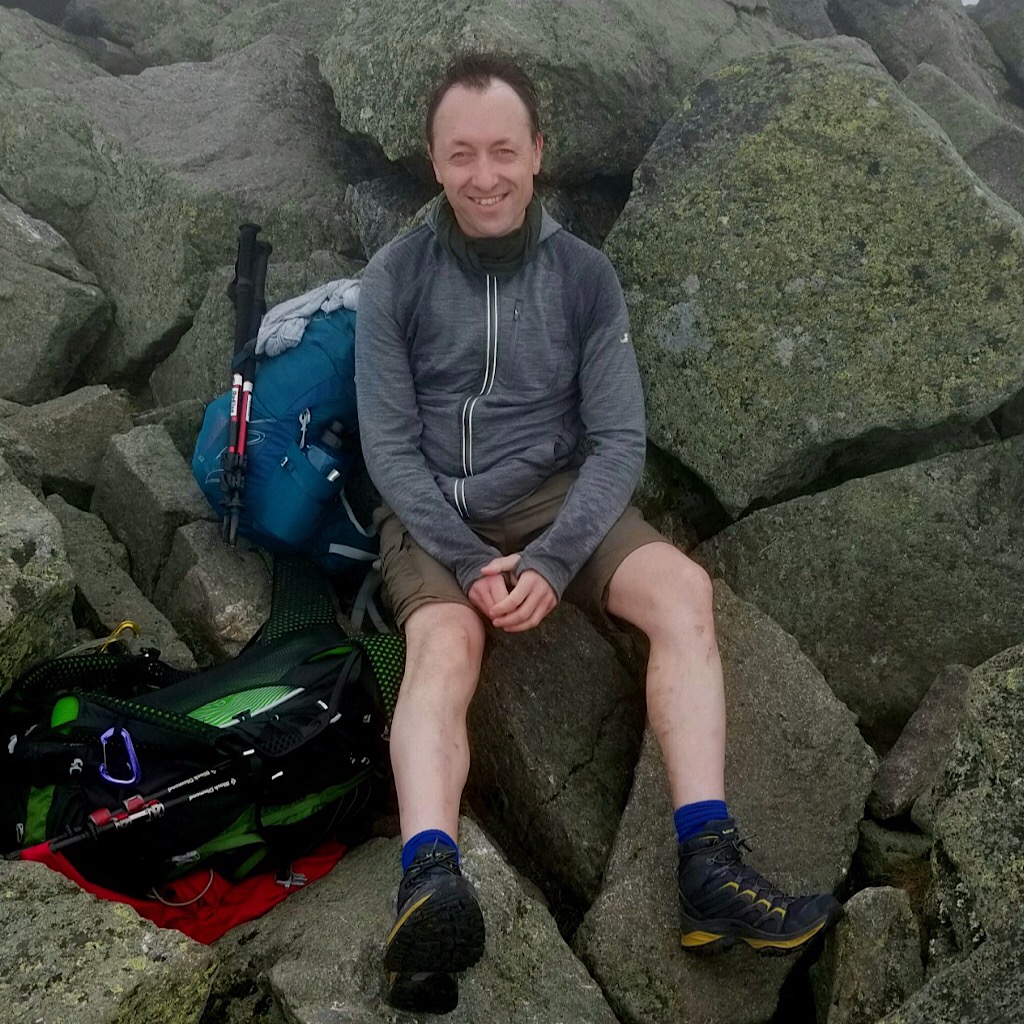 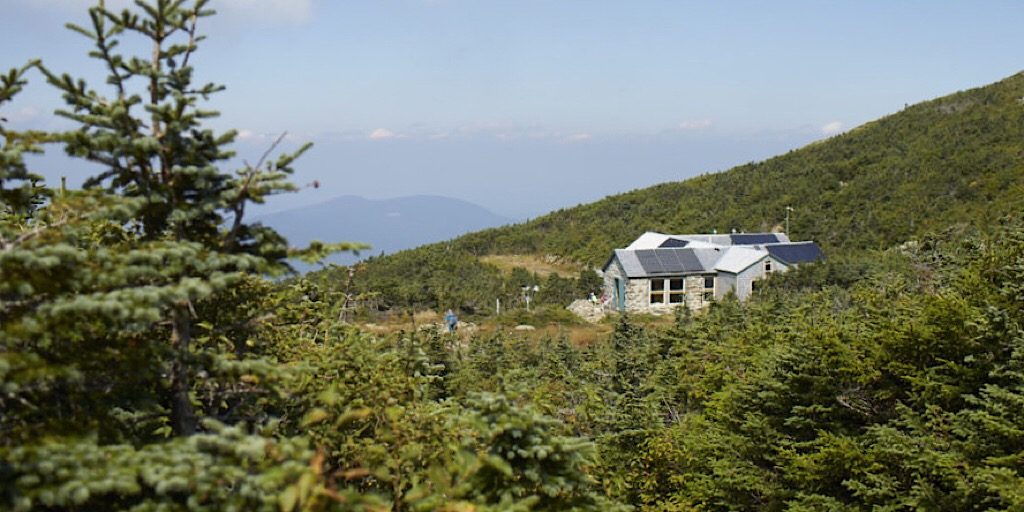 After summiting Mt Adams they dropped down toward the Madison Spring Hut to the east (4800’/1463m). Their timing was good as they were able to enjoy a bowl of hot pumpkin soup for lunch. They settled in at the hut securing their space before heading out again with lightened packs to summit Mt Madison. 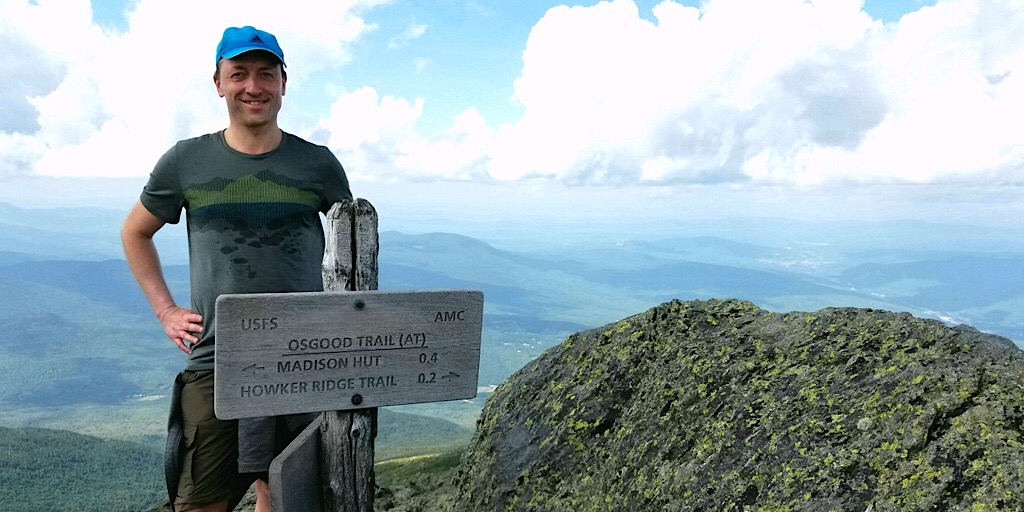 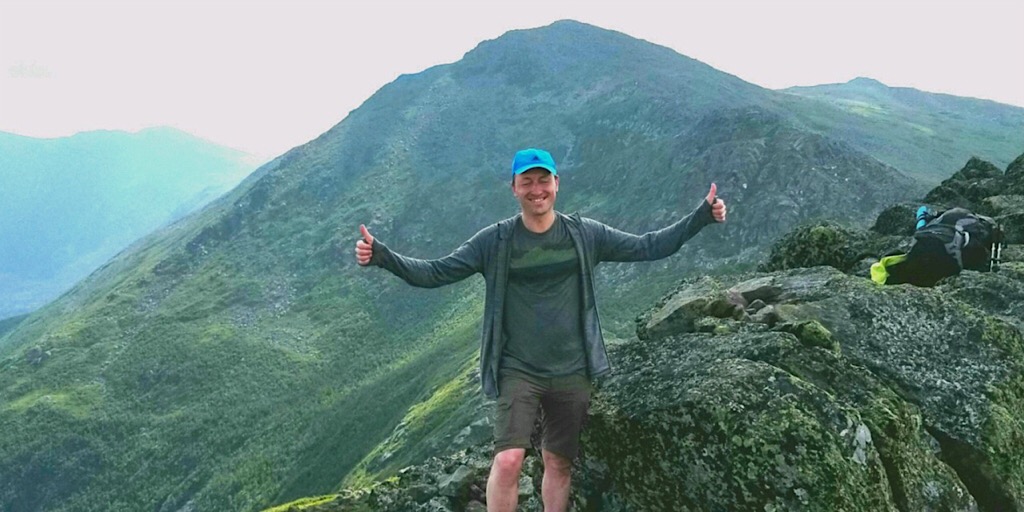 Wow, that was quite the first day! Begin stringing together the superlatives now.

Upon returning to the from the Madison summit they kicked back to enjoy a relaxing time in this amazing place. They mingled with other guests at the hut — including others from Germany like Florian — enjoyed a fine dinner, then slept soundly and deservedly in their bunks. The following day would nourish their souls and fill their hearts. They needed to be ready. 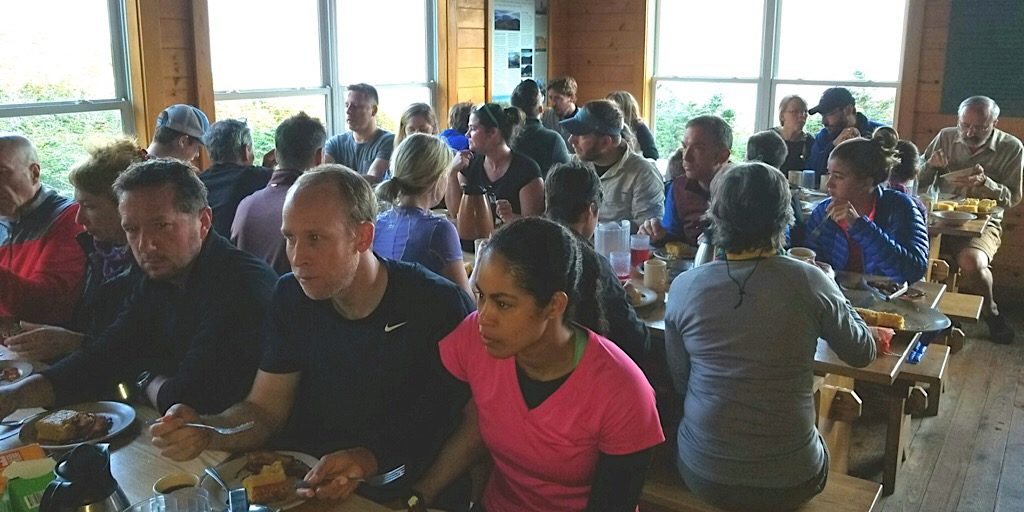 Not everyone loves the presence of the Huts, but they are a social center to be sure. And the hot food is delicious. 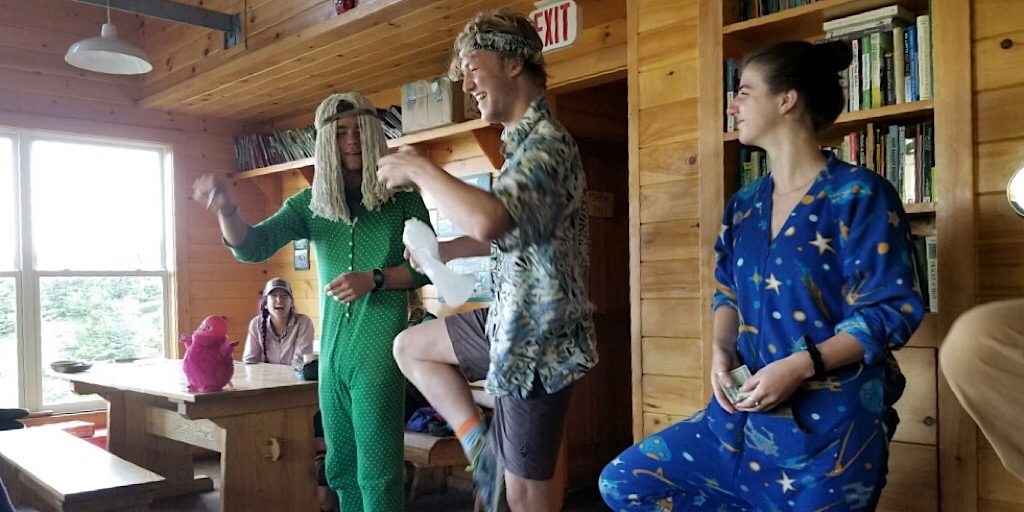 The “Hut Croo” wear costumes and put on skits to teach their guests and amuse families. 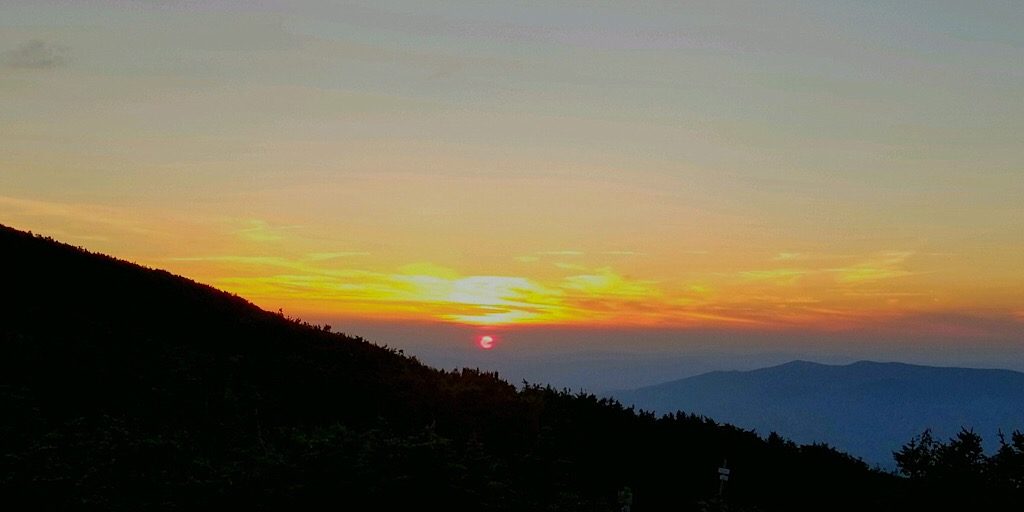 The end of a fine first day.

Approximate totals for day one…

This was looking to be one of the best days of the four Florian had scheduled, and that is a good thing because traversing the Northern Presidentials is no easy feat. In some weather, in fact, it can be downright dangerous. Remember that warning sign (see inset)? Day two for our team would have no such concerns as they enjoy endless, sweeping views in every direction during the entire section. The first objective of the day was to head to Mt Jefferson (5716’/1742m) sailing by Mt Adams as they went since they grabbed it the day before.

Doing so would take them through Edmand’s Col which is a remote alpine section; remote because of its distance to the safety of treeline. Since the col (gap between peaks) is narrow and low and catches unobstructed winds from the northwest, it creates some pretty forceful winds by way of the funneling and compression of the air — think Venturi Effect. On this day, however, there would be no concerns. There were winds, of course, but nothing too forceful or concerning. It was gorgeous out and the two were loving it. Moreover, between the two gentlemen they were finding friendship and fine companionship making the experience even richer. 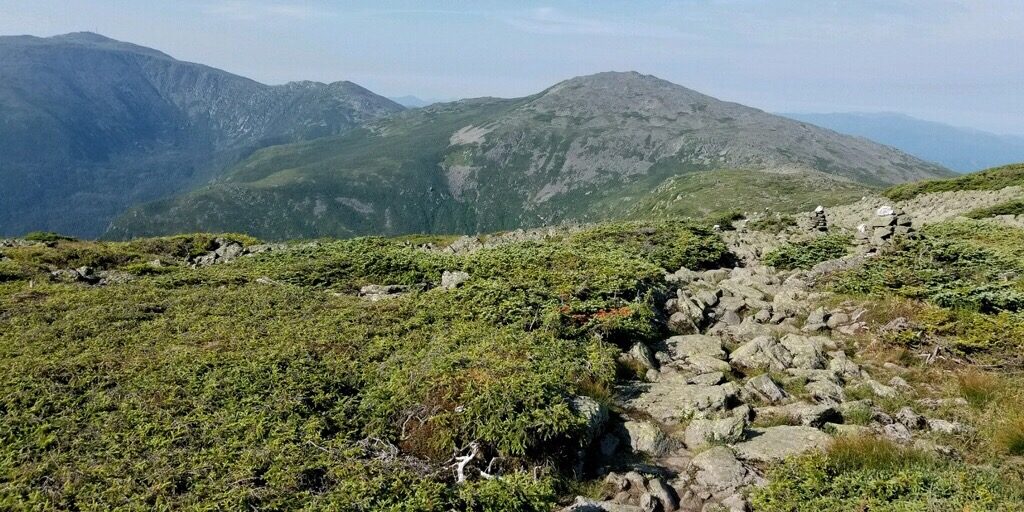 Moving west again, following a line of quartz-topped cairns, they hike toward Edmand’s Col and the peaks beyond. 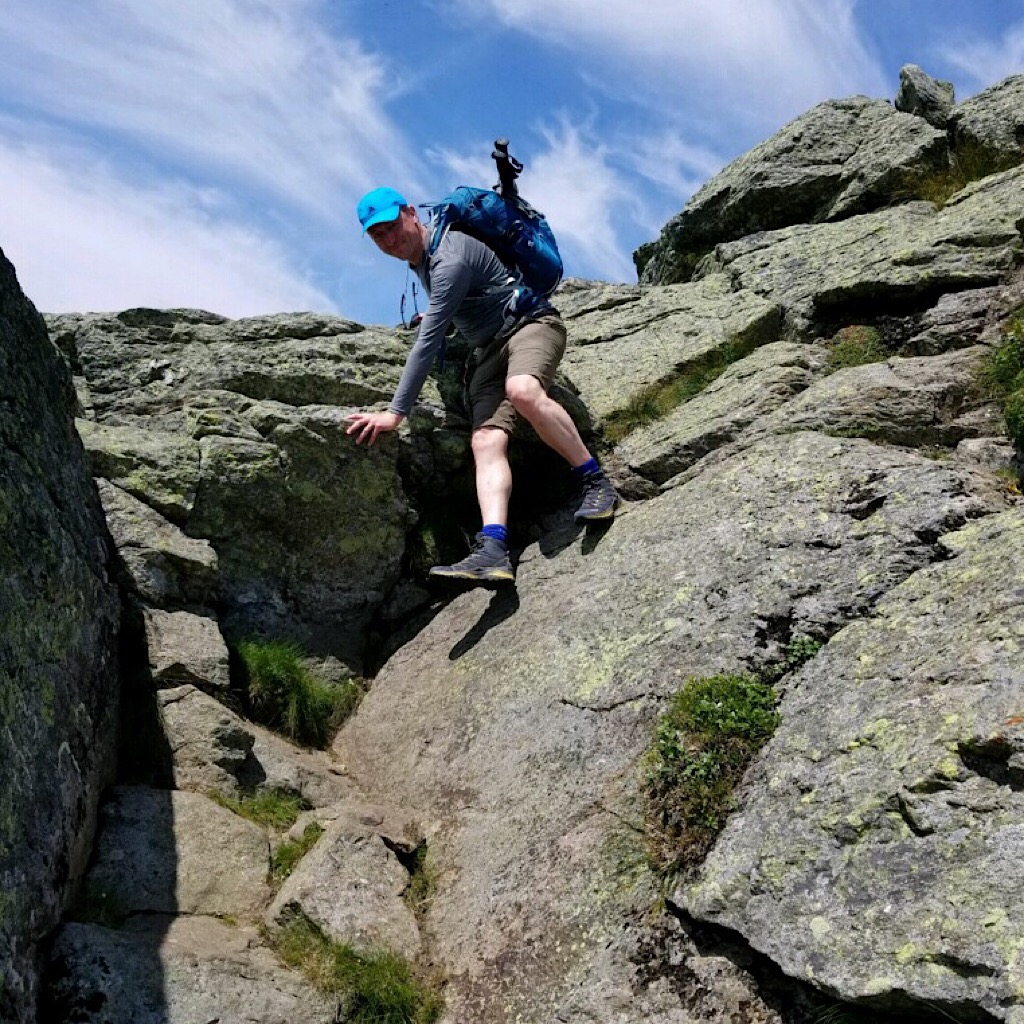 Dropping down into the col, with emphasis on not actually dropping. 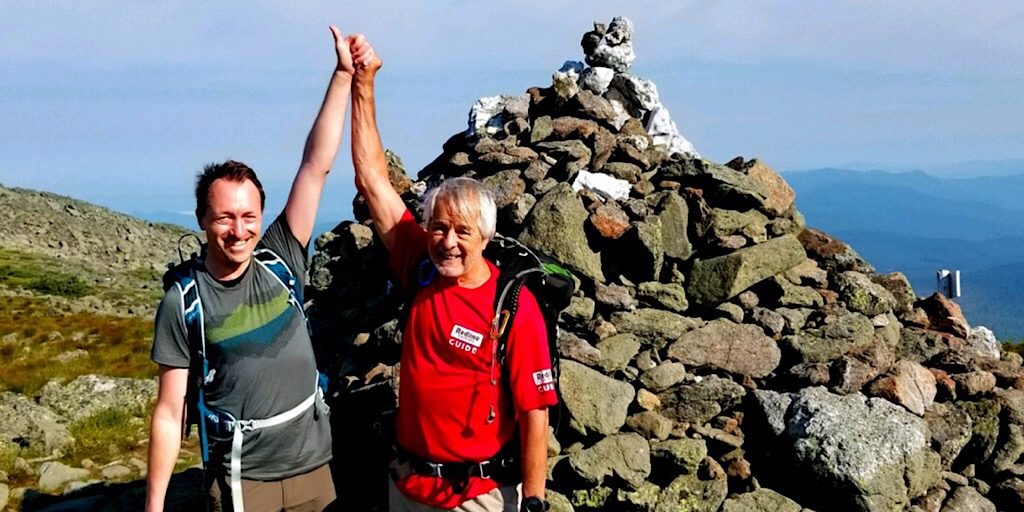 The team celebrating by the junction cairn next to the Mt Jefferson summit. 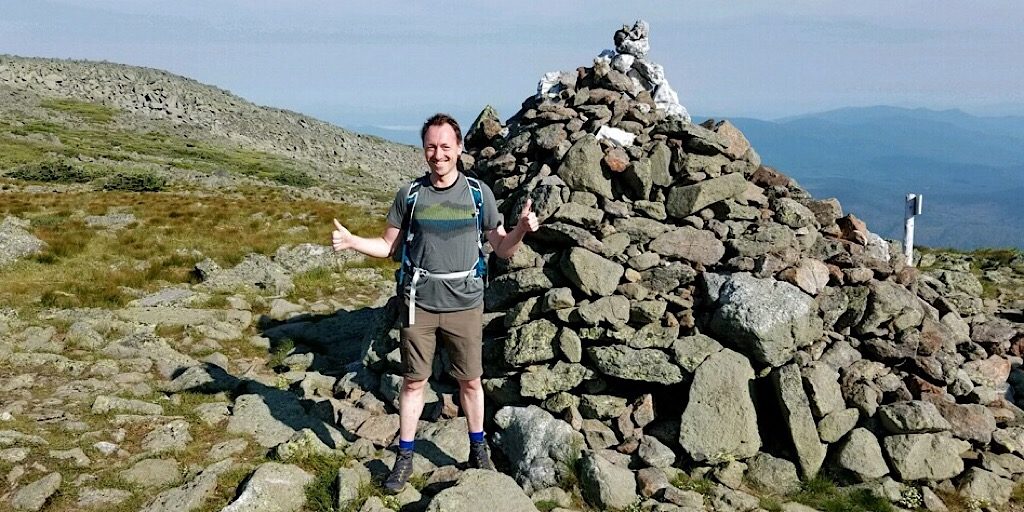 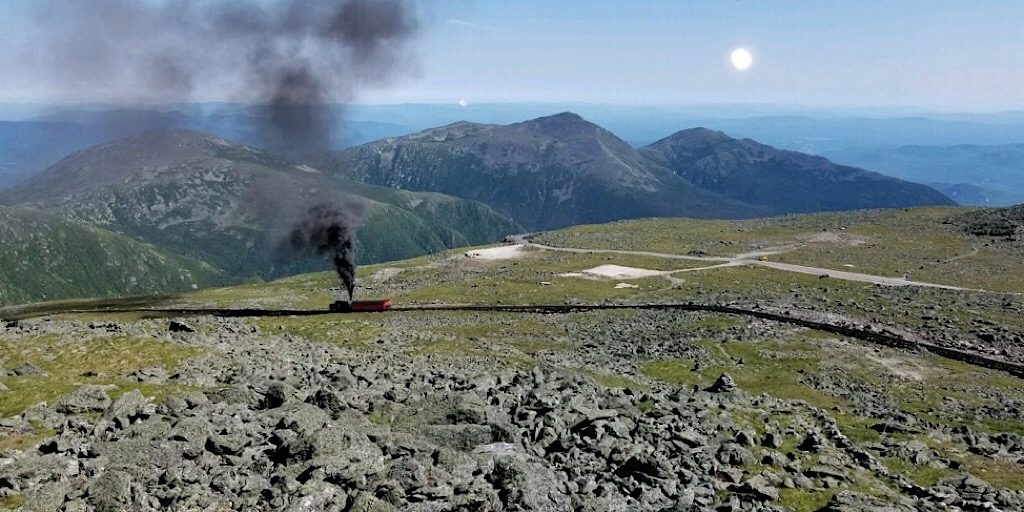 Looking back at the Northern Presidentials from Mt Washington. Smoke courtesy of the Smog Railroad.

Jeffrey is a member of the Mt Washington Observatory (MWOBS) — a Mt Washington-based weather observatory providing us with outstanding 48-hour weather outlooks (PDF) for the higher summits. Being a member has its perks. One such perk is that Jeffrey was able to arrange a tour of the weather station and summit weather museum for he and Florian. To top it all off, Florian was permitted to climb the observation tower where the weather instruments are attached (don’t touch, please) located several meters higher than the actual summit. There, in that moment in time, Florian was truly the highest land-based human being in the entire northeastern part of the United States. 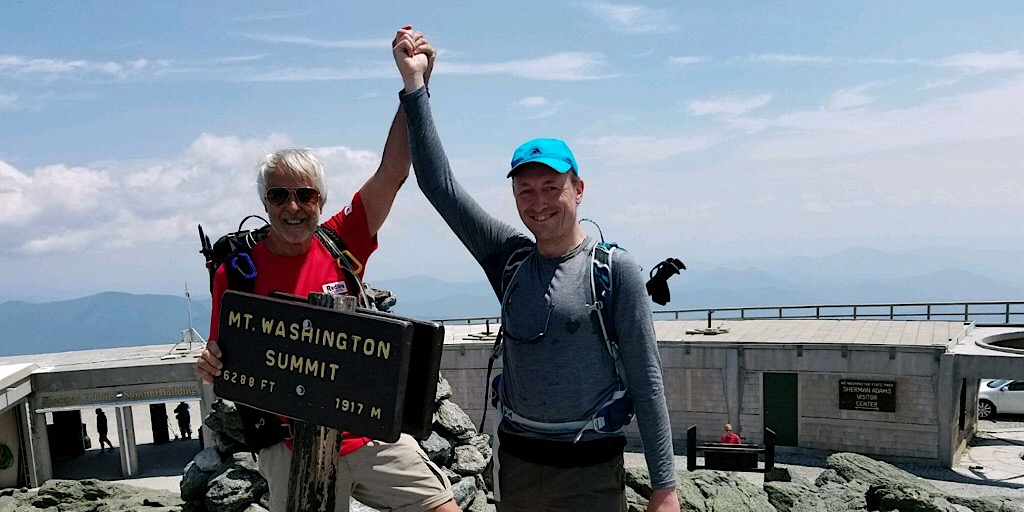 Our team on the Mt Washington summit (6288’/1917m). This is the tallest, most prominent mountain in the Northeast.

After their extended visit on the busy and popular Mt Washington summit, the team continued south toward their final destination of the day: the AMC’s Lakes of the Clouds Hut (5012’/1528m). There they would spend the night, again enjoying the company of other likeminded travelers and take in a good meal, and more. At over 5000-feet this is the tallest of the club’s Huts (though Madison Spring Hut is the newest).

While at the Lakes of the Clouds Hut — at the Hut Croo’s suggestion because cold water is almost as good as ice for sore muscles — Florian went for a swim in the closest Lake. At one time this may have been frowned upon due to the Lakes being the water source for said Hut, but nowadays they source their water from a deep well.

I went swimming in the Lake. An exceptional experience: swimming in the clear water between big rocks, fir trees, and the blue late afternoon sky. A pleasant treatment for the hikers’ legs. —Florian 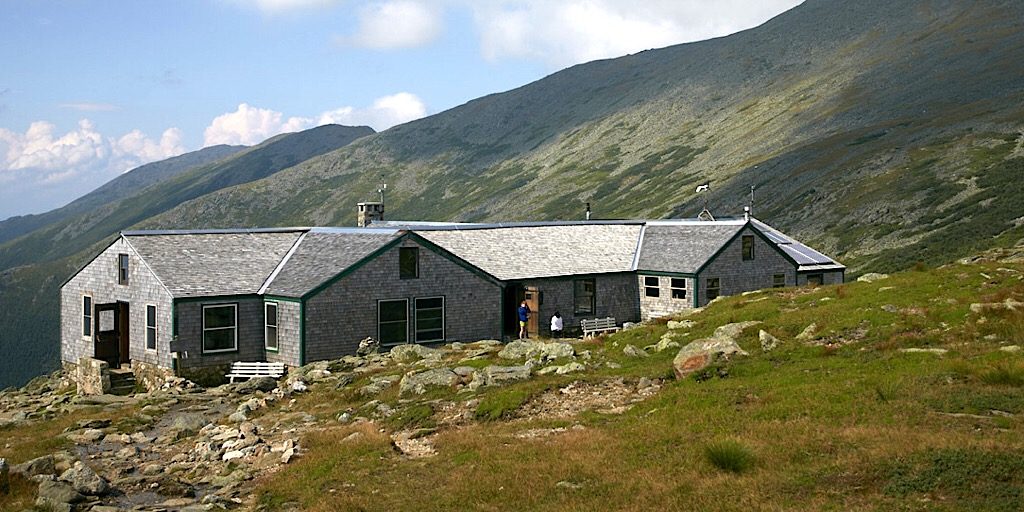 They enjoyed an incredible evening, but opted not to hike to the Mt Monroe summit (5371’/1637m) that evening as some will do, instead saving it for the morning. Due to a trail closure for reconstruction on the summit’s bypass route (AT), they had to go up and over the top anyway so decided to save it for the morning. Speaking of morning, the team was thinking about leaving early, before breakfast, to beat out a less-than-favorable (seriously understated) Tuesday forecast: 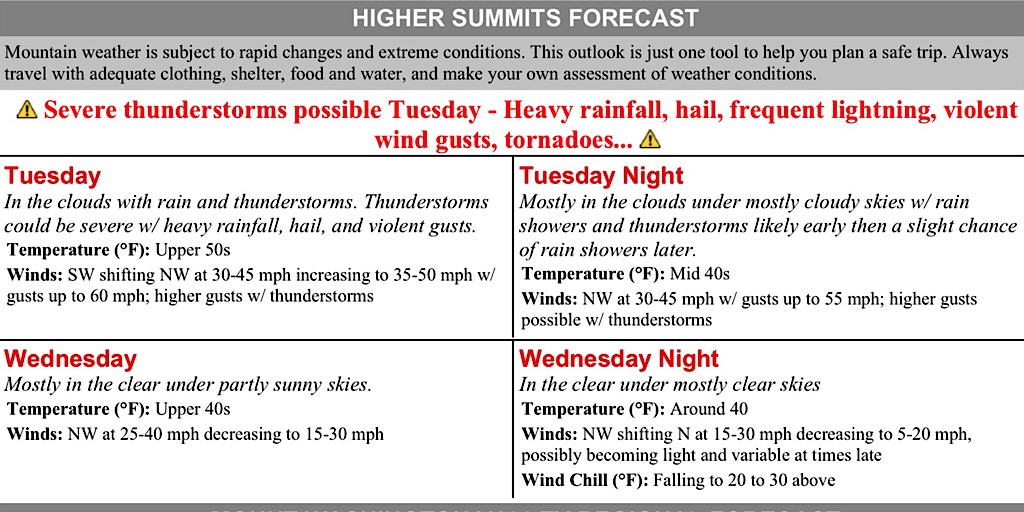 We knew the forecast called for unsettled weather Tuesday. But not this unsettled! This could be a deal-breaker.

Story continued on next page »