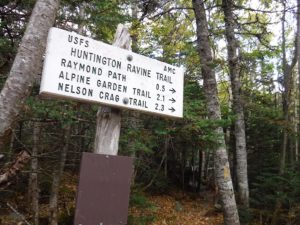 It is said that the Huntington Ravine Trail, which ascends Mt Washington (6288′), is the single most challenging regular hiking trail in the White Mountain National Forest. This is true… arguably. There are sections of other trails that momentarily surpass the peak challenges or cruxes Huntington offers, like the bottom third (or less) of the Mt Tripyramid Trail’s “North Slide” as but one, but due to the amount of exposure, and the length and frequency of the sketchy bits on the Huntington Ravine Trail, it’s probably a pretty accurate statement to make.

That’s where we were today. Not one hiking tour, either, but two — hence the ‘s’ on the word Ascents in the title. Redline Guide Bill Robichaud was on the job today guiding one fellow, David, on a private tour. Meanwhile, on the same side of the mountain, on the same trail, in fact, Mike Cherim was guiding one woman, Kerri, on a separate tour. Except the lines became blurred. It was thought, you see, that differing speeds and goals would provide separation over the course of the day. Bill and Mike even carried two-way radios. The speeds were about the same, though, and the two groups organically became one.

The winds were whipping and the temperatures were finally comfortable. Fall-like. We didn’t summit for a couple of reasons, the strong winds being one, but our primary objective was to hike the trail itself, anyway. As guides, we were there to advise, accompany, and support the mission of our guests. To help them safely succeed. They did, so we did, too. 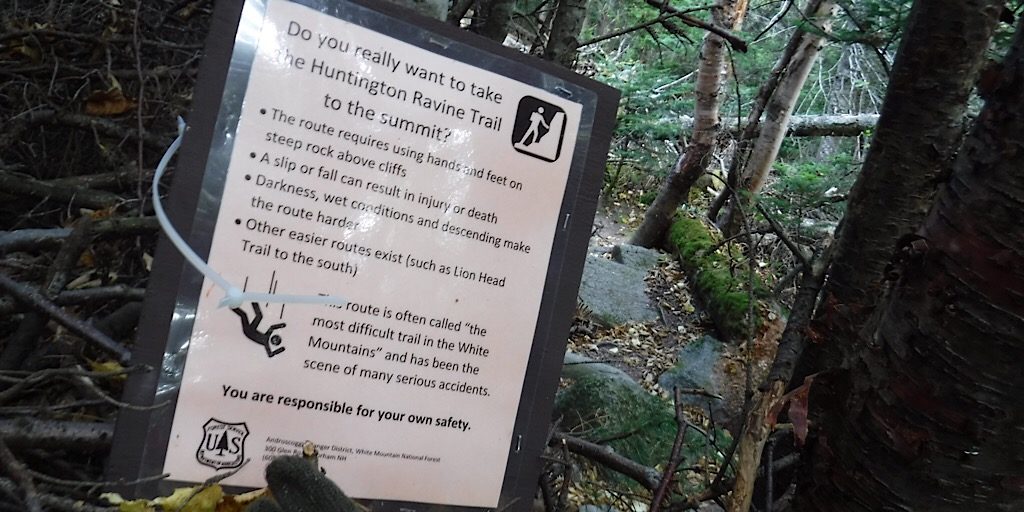 Are you really sure you want to do this? Yes.

We began on the Tuckerman Ravine Trail out of Pinkham Notch. We hiked until we reached the Huntington Ravine Trail where we took a break then continued on — after considering the warning sign, that is. The upper reaches of the trail, the ravine headwall itself, can be lethal to the unsteady, unprepared, or in the wrong conditions. The lower sections of this trail are quite pretty. It’s a fine hike from the junction on with smaller crowds (we saw two groups of two on trail with us). 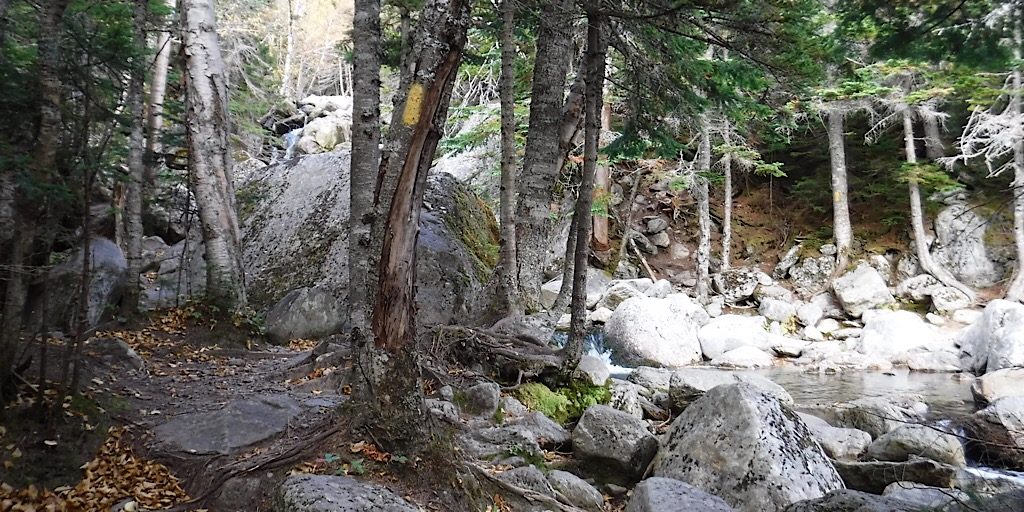 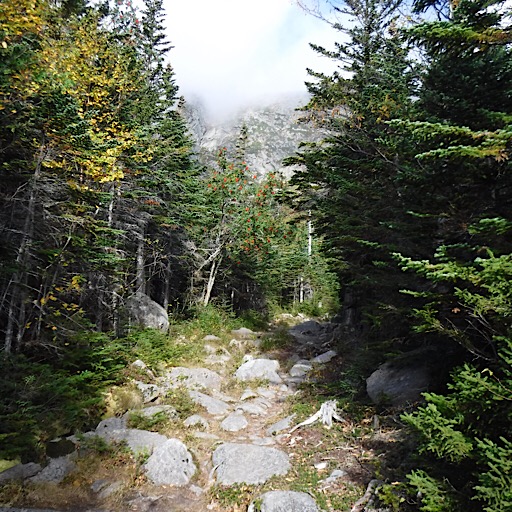 Looking toward the headwall from the fire road. 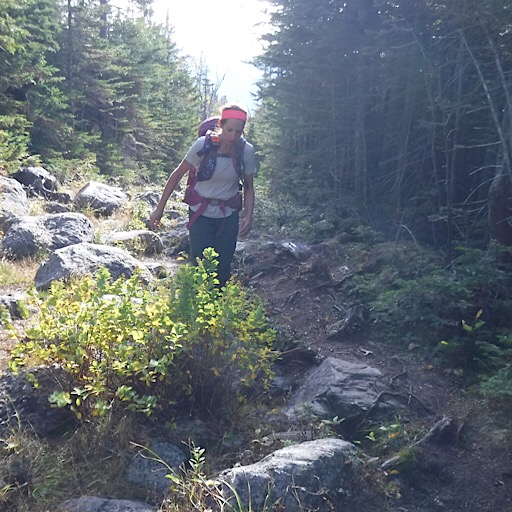 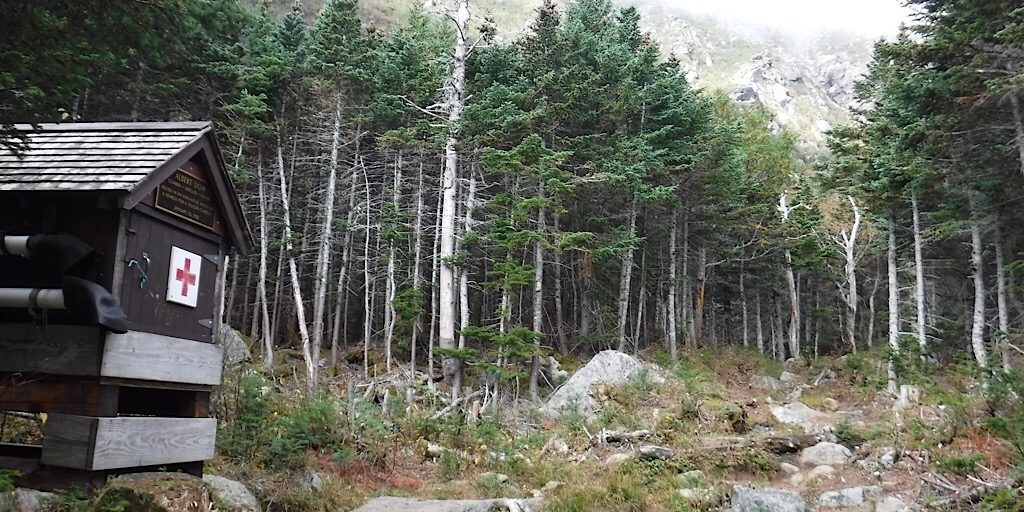 A first aid cache reminds us this place is no joke.

When the fan finally came into view, about the time we passed some big boulders alongside the trail, more boulders appeared. On trail. They were the trail. There are some dangers here, but they are pretty manageable and the consequences not excessive. Care had to be taken. Fun had to be had. We carried on, enjoying our approach to the headwall itself. 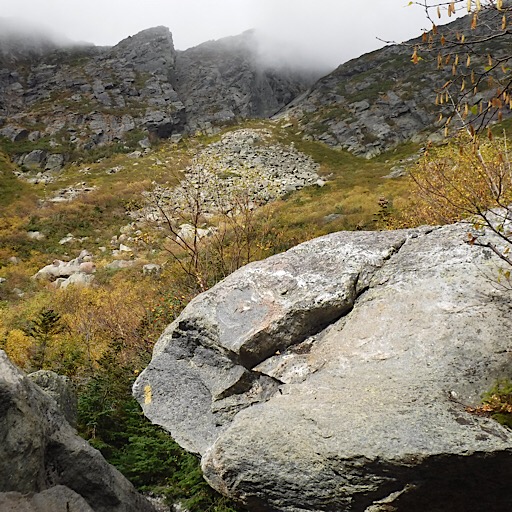 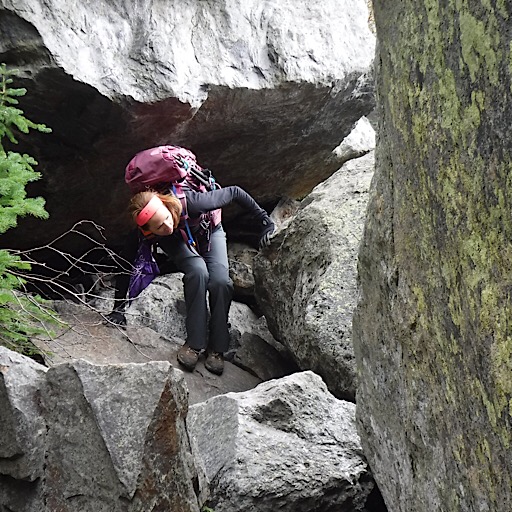 By fun we mean bouldering. 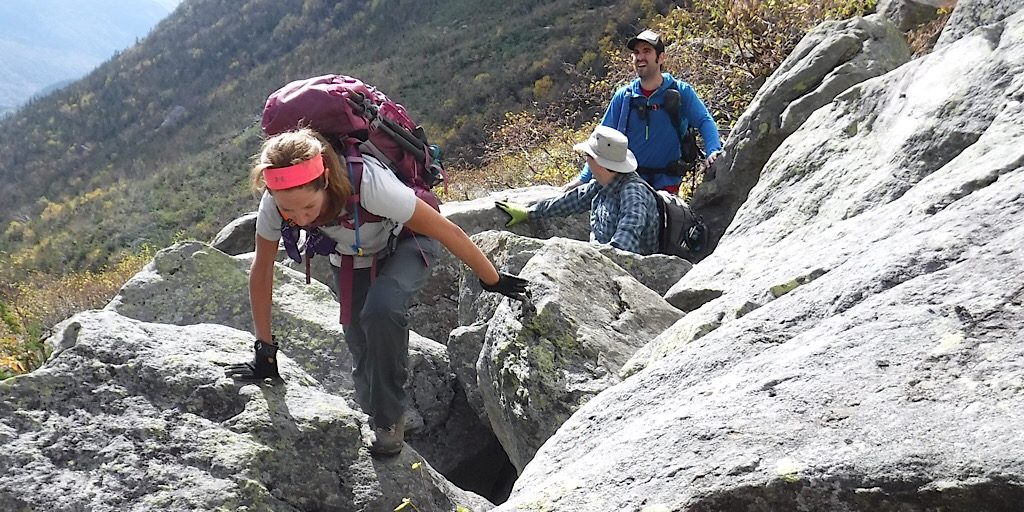 Kerri spiders her way over the talus at the base of the Fan, while Bill and David pause for a moment.

The summit forecast called for a slight chance of sprinkles, high winds, cool temps, and clouds. Fortunately for us, the clouds stayed above us, rising up the mountain ever out of reach. By the time we entered the “Fan” (a wedge shape of talus leading to Central Gully) the sky above was revealing blue patches. We loved it. The winds rocked us, but they felt amazing (with the right layers, of course). The rock stayed dry and we enjoyed spectacular views in the sun as we climbed. 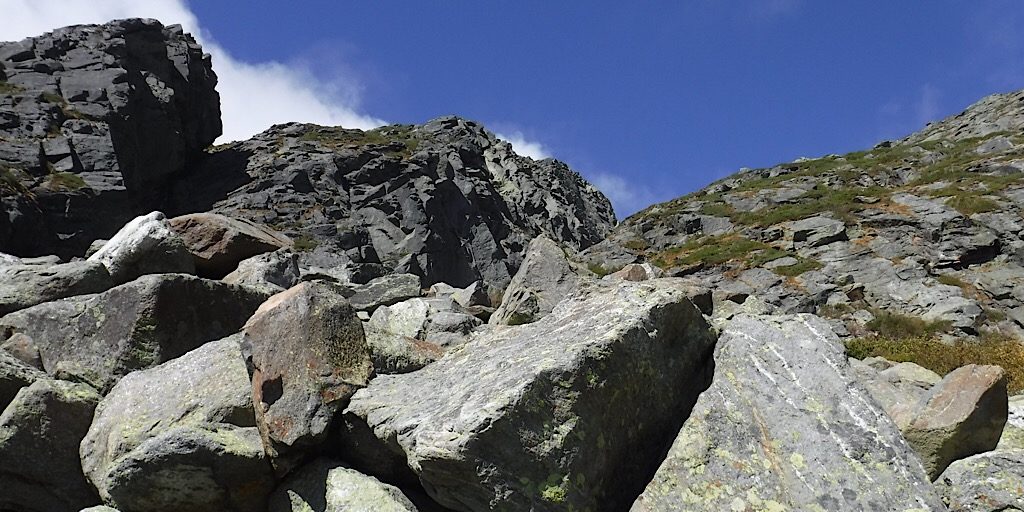 The skies over the summit never fully cleared, but we enjoyed a lot of this headed up. We stuck to the talus. 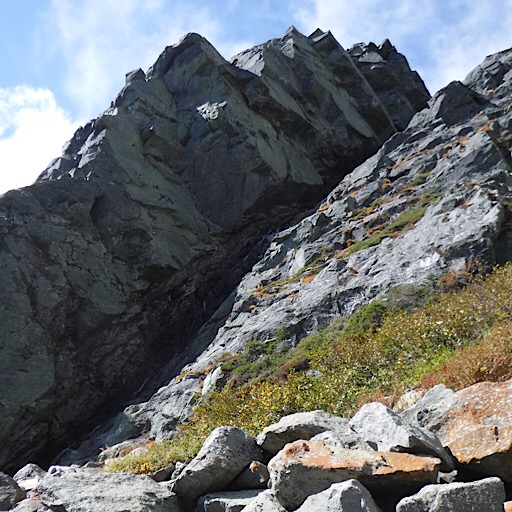 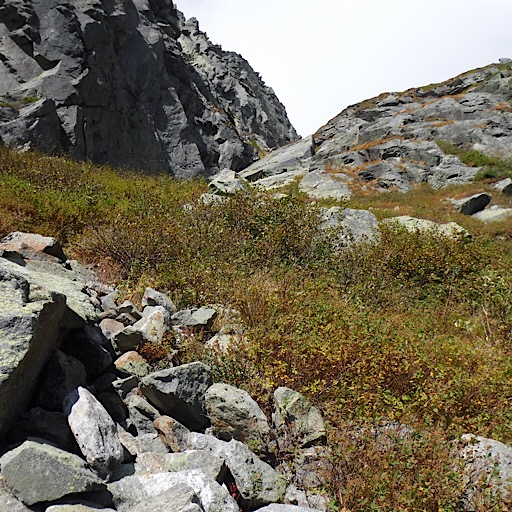 Near the top of the Fan. Central Gully ahead. 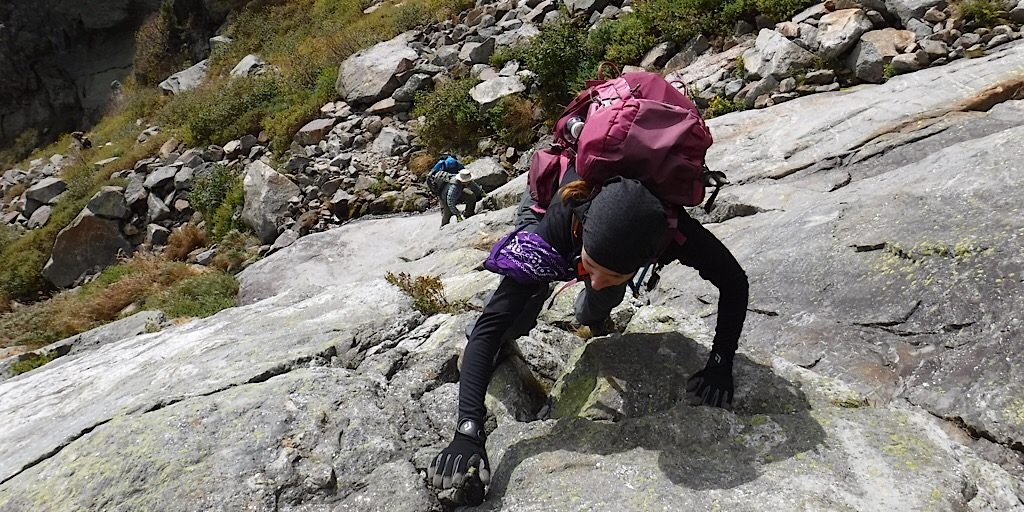 Kerri nears the top of the first slab. David and Bill begin.

It is true. A fall here might very well leave a mark, or worse. It is important to stay on trail while ascending as there are dead ends that people can climb into, but not get out of. On the right route, the hazards are reduced, overall. 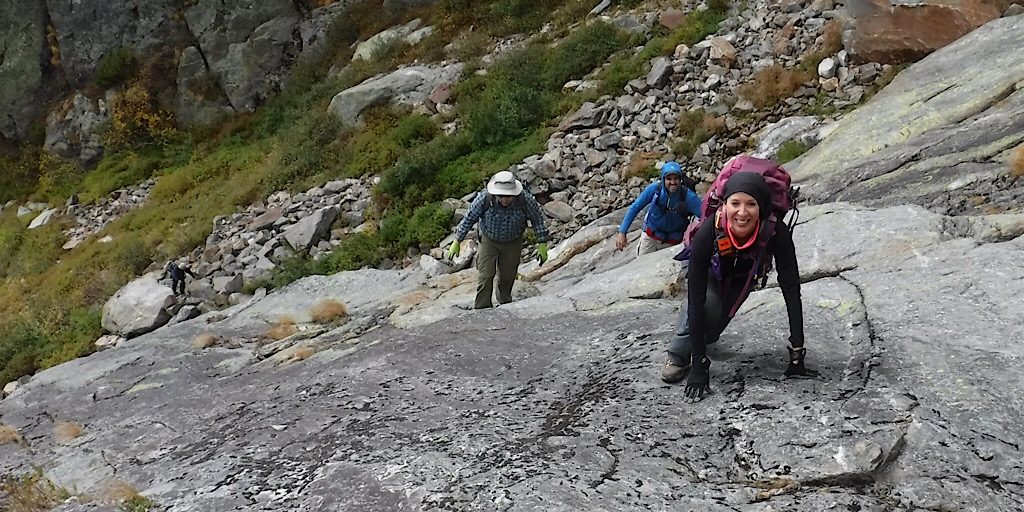 Steady progress. Everyone is doing great. Dave, in particular, loves to scramble. 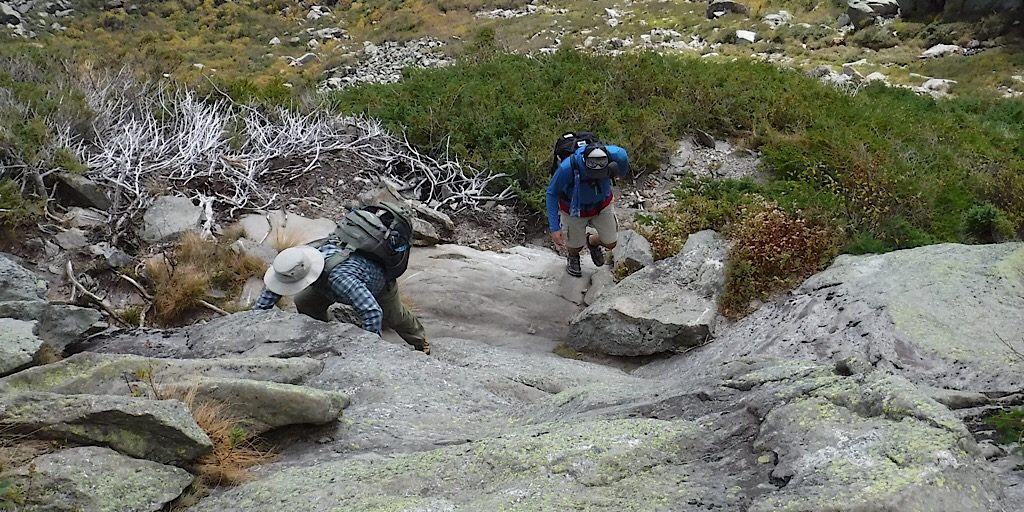 The photos do not give the steepness any justice. 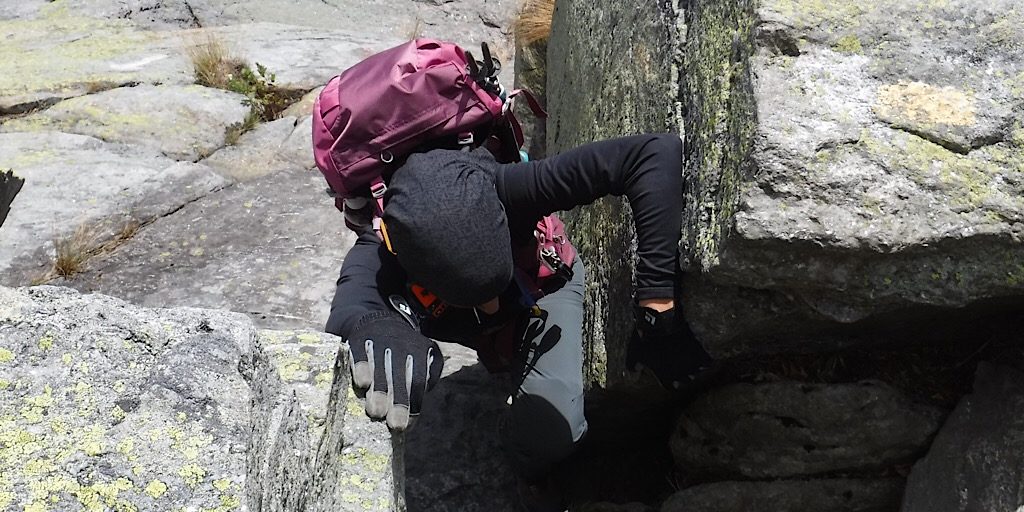 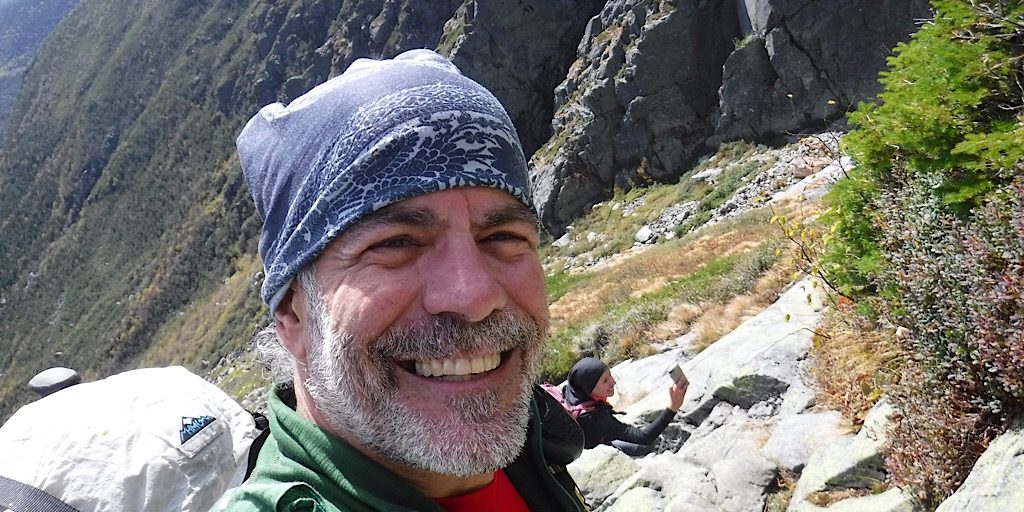 Mike getting photobombed by Kerri. 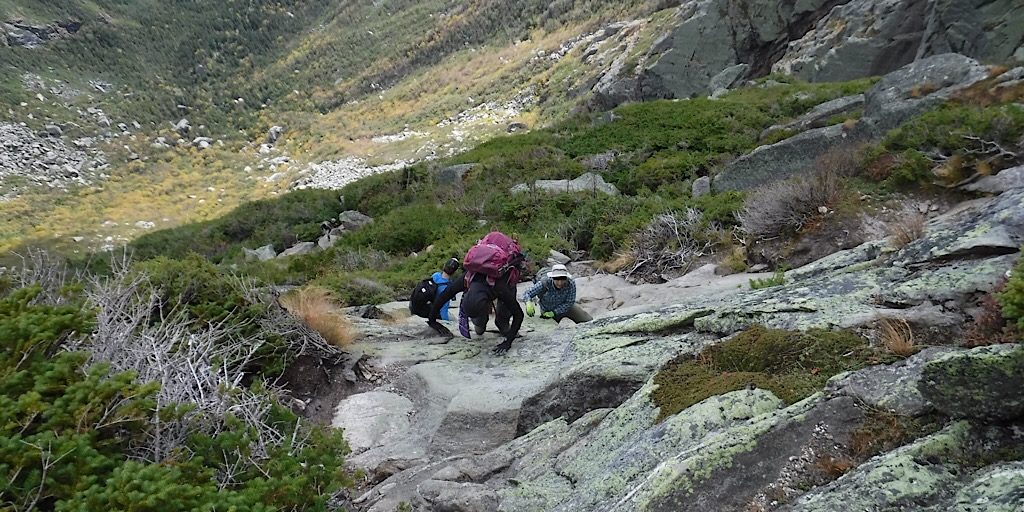 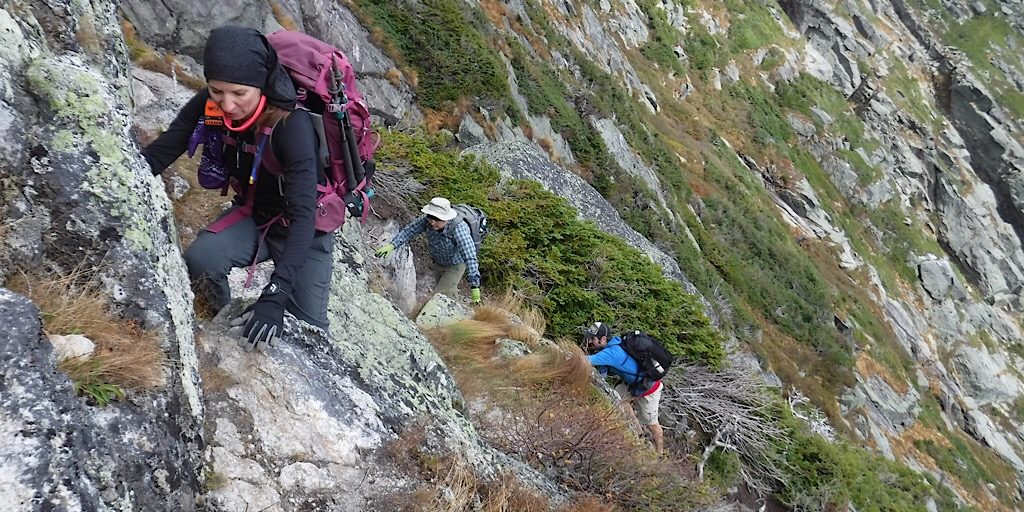 We end up sticking together. It worked. 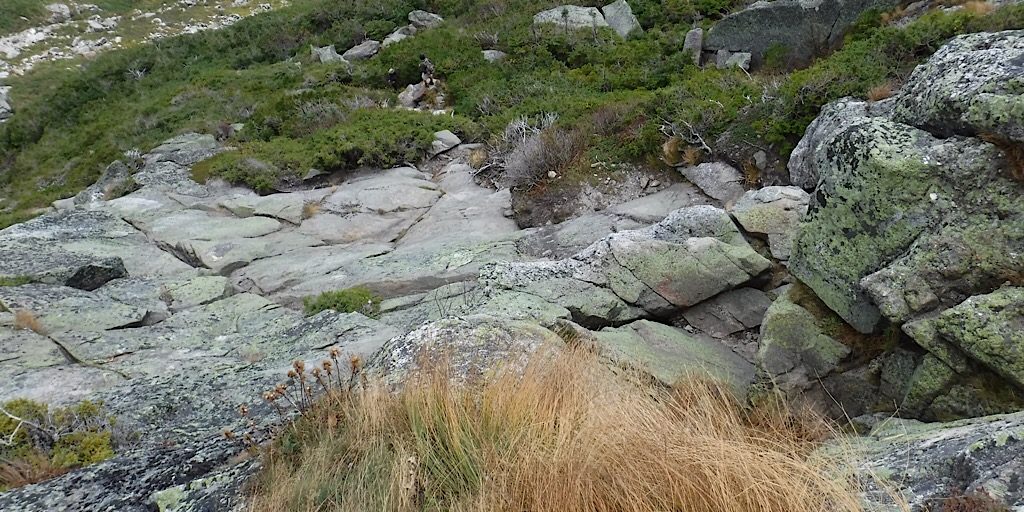 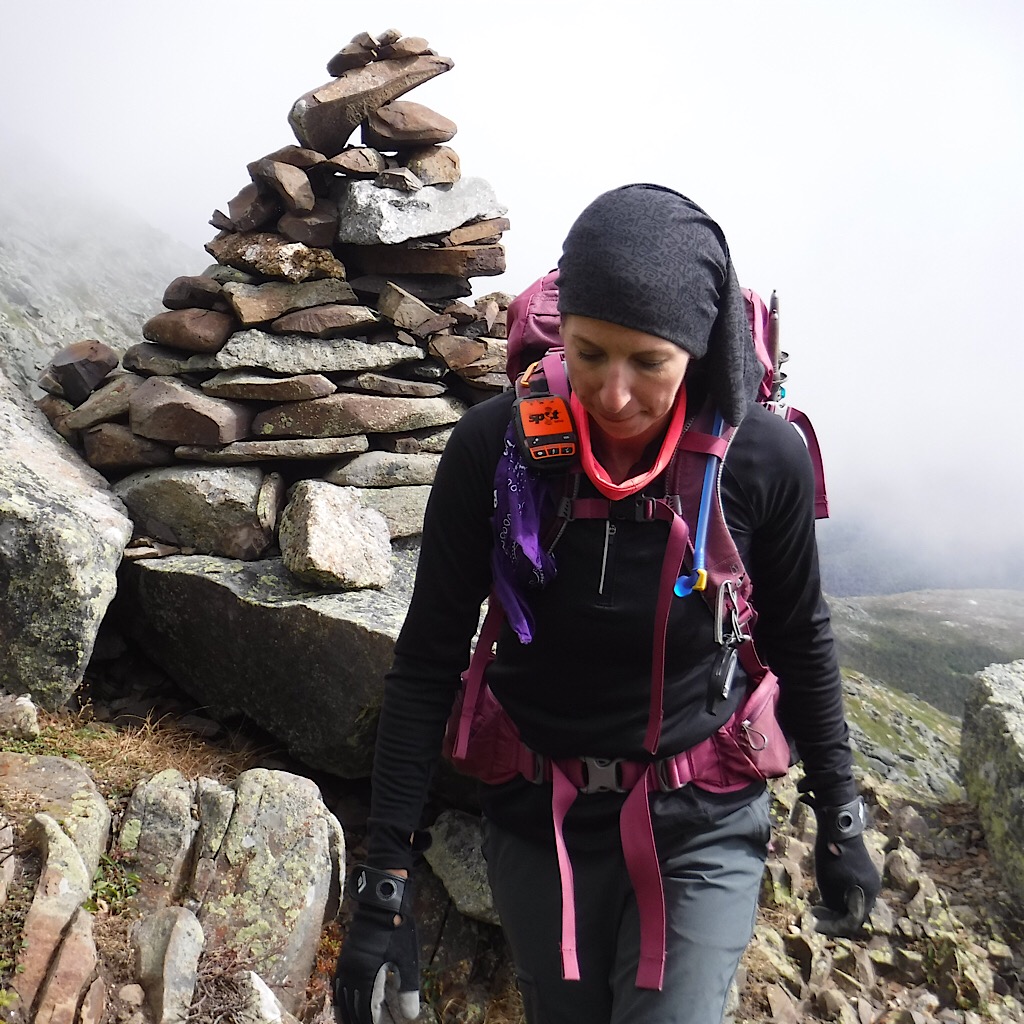 Topping out of Huntington Ravine. 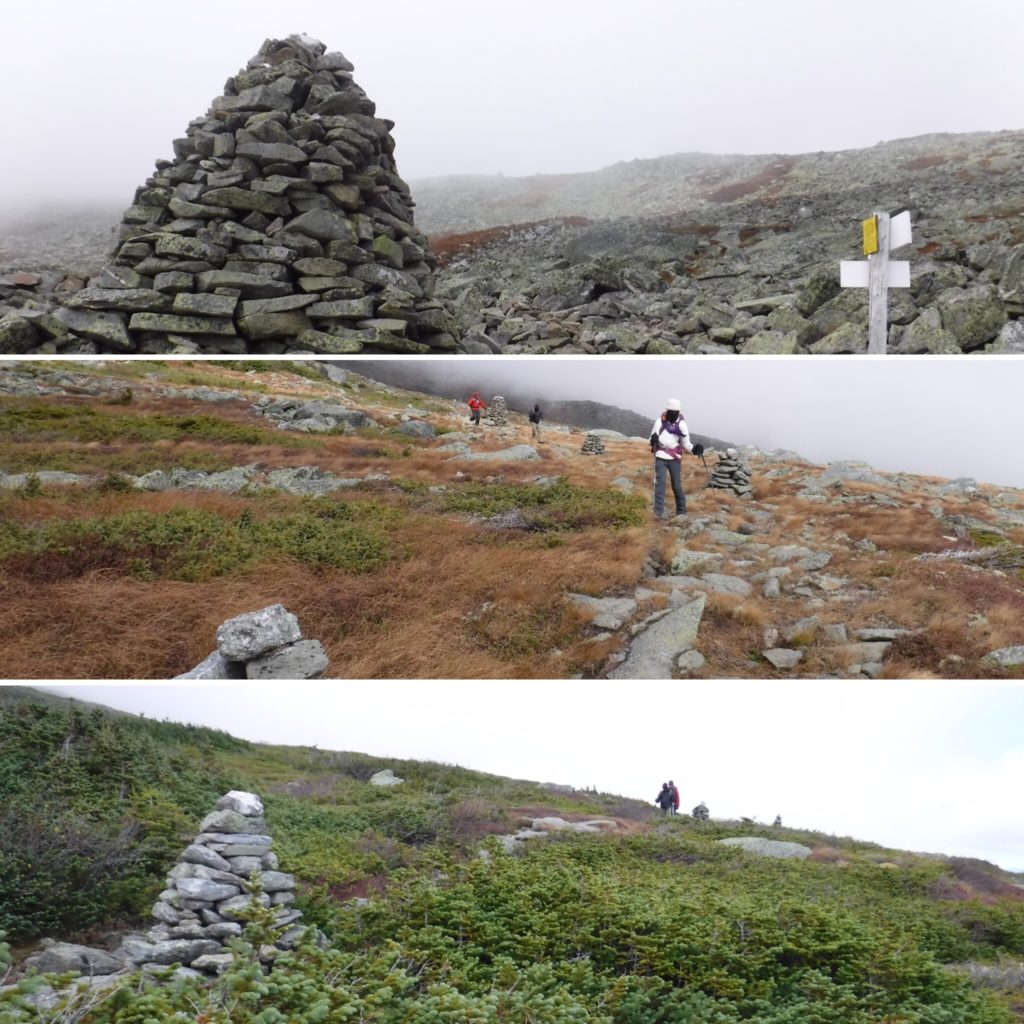 We traverse the Alpine Garden after topping out. 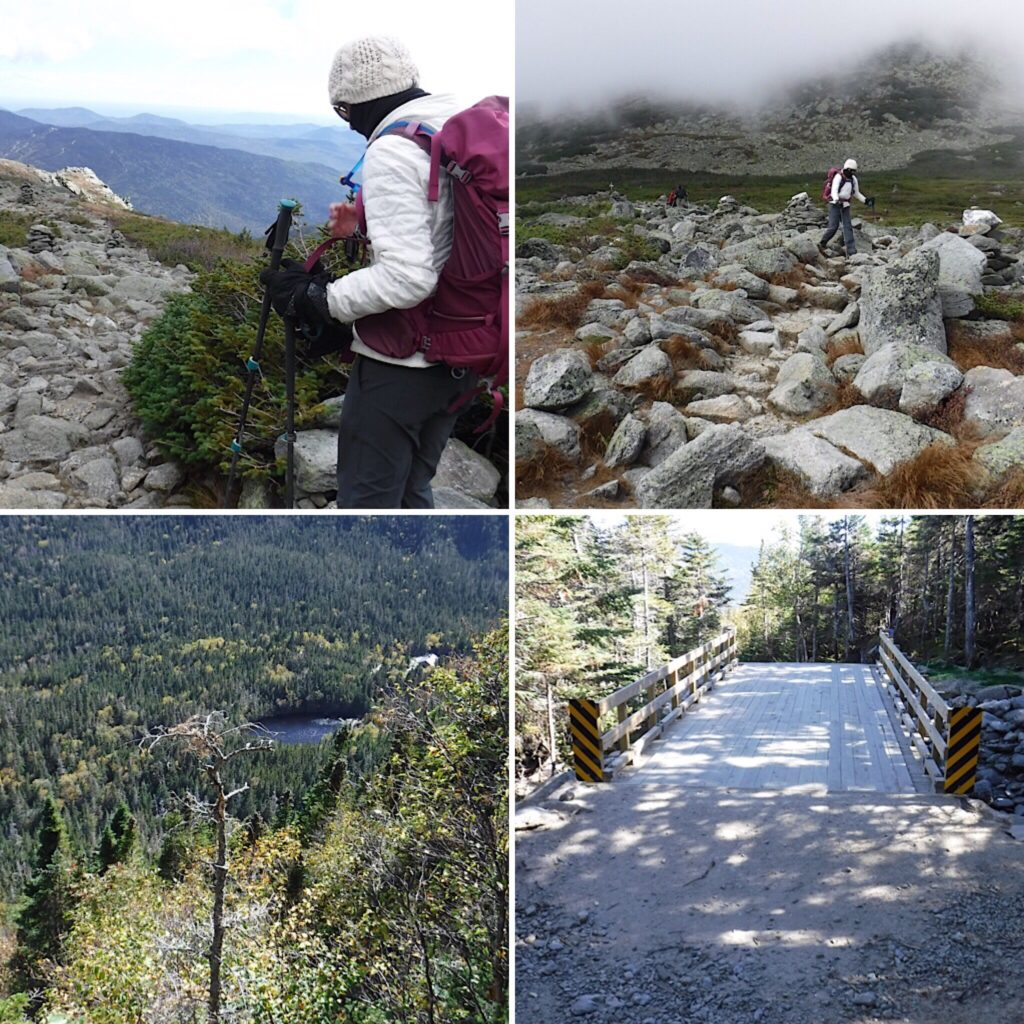 We exit via the Lion Head Trail concluding a fine day in the mountains.