There’s something regal about the Northern Presidential Range in the White Mountain National Forest. What with so many things kinged, knighted, and castellated, it stands to reason. But it goes further. The mountains in that range are majestic to those who set feet upon their upper flanks and summits. Maybe it’s the alpine air, or maybe the stunning vistas. And quite often, it is the route that claims the the most attention. Such is the case of one returning guest and student who wanted to push himself and take on one the tougher trails that climb Mt Adams. He had his sights set on the King Ravine Trail of Terrifying 25 fame. On lead for the trip was Redline Guide Mike Maciel. Shadowing Mike was Redline Guiding Owner, Mike Cherim — two Mikes are better than one. He wanted to shadow for two reasons. One is that it could make for an awesome short video. Another reason is it’s a fun trail. With two reasons such as these, joining was a given. So, without further ado, let’s check out the video. Then read what Mike Maciel wrote about the trip’s beginnings — a little backstory.

Today was all about comfort zones. A Redline guest who had previously taken Hiking Intro and Wilderness Navigation courses with Mike Cherim was looking to push outside of his.

A stretch goal for the day would be to hit a summit, Adams or Madison. But what he really wanted out of the day, was to do something hard. The Whites can be brutal and unforgiving when they want to be. The weather, the rocks, the wild terrain. But they can be hyped quite a bit as well, leaving some of our hikers feeling overmatched, or “in their head,” so to speak.

So when our guest reached out to Redline Guide Mike Maciel he wanted to do something hard but he didn’t think he could mentally or physically handle King Ravine. Mike asked him why not? His main reason was a fear of heights and exposure. King Ravine is one of our hardest trails, but it is not the same situation as Huntington. On King Ravine, the hiker does not ascend the exposed slabs of the headwall, instead passing just below. It’s more of an unforgiving ascent up a boulderfield. Mike thought he could do it, so he reframed it as an opportunity. If we get up it, then you know what you are capable of. If we don’t, then you know what it takes and what you need to work on.

It was a hot day and our guest hadn’t been feeling well leading up to the hike. But he battled. He laughed. He looked up in awe. He took in the amazing scenery and snapped plenty of pics (or was that a strategy to get extra breaks). He even got two Mikes for the price of one as Mike Cherim came along for the day to shoot some video. At one point he said I can’t do this, I’m not going to make it. Mike M carried his pack to give him a little boost. Both Mikes asked him plenty of questions, made sure he ate and drank fluids. Slowly but surely a funny thing happened. He didn’t give up. And he did the damn thing. He topped out and was rewarded with an amazing view of Madison. A bit of summit fever hit, and he said he wanted to go get it. We did what guides sometimes have to do, told him not today, and gave him back his bag.

On the way out we stopped above Tama Falls to soak our feet and our heads in the cold water, our guest was happy he wasn’t still somewhere on the side of Madison in the afternoon heat. Airline Junction may have been the “summit” for the day, but the goal of getting up one of the baddest trails in the Whites was achieved. And now he knows. He knows what he needs to work on, but more importantly he knows what he is capable of. —Redline Guide Mike Maciel

Mike M wasn’t just busy writing about the hike, he also took the majority of the following still photos. 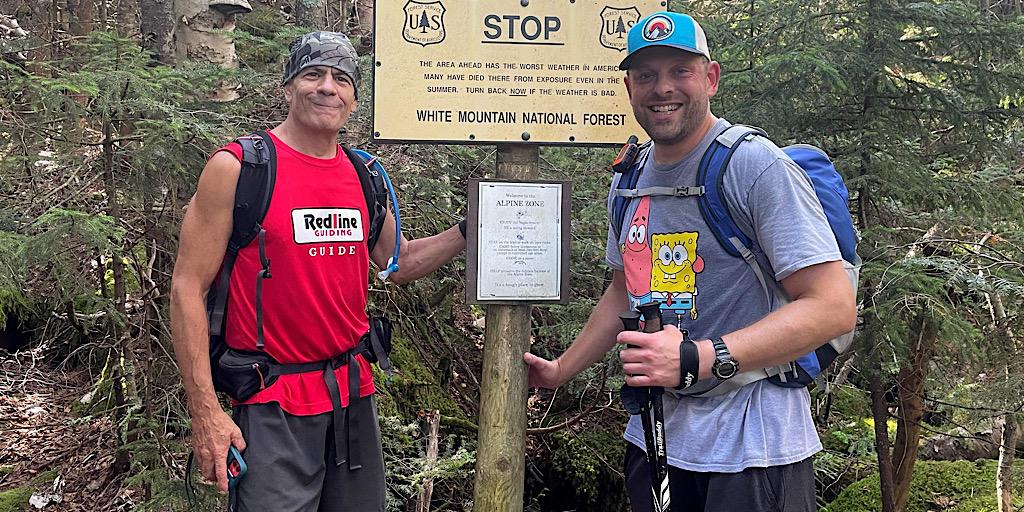 Starting out, clean, fresh, and not yet sweaty. 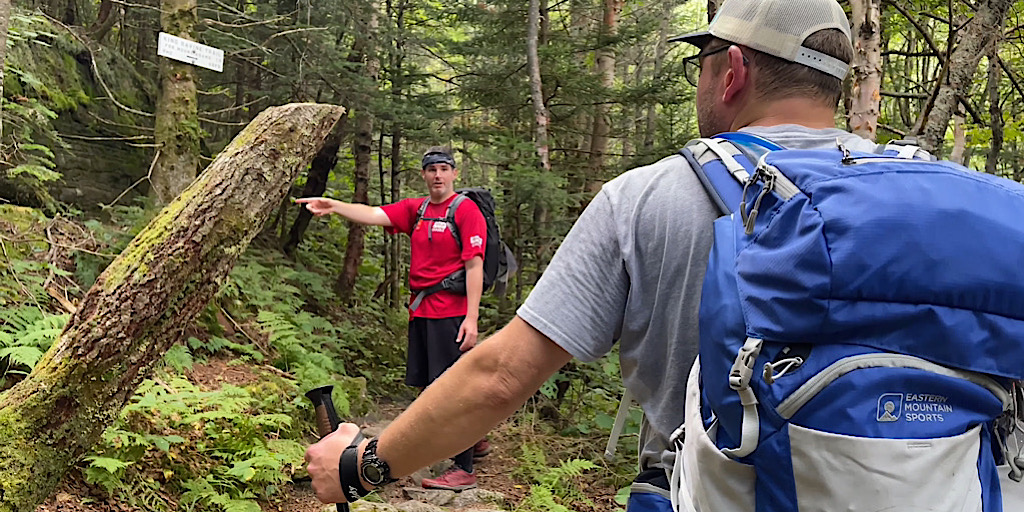 Mike M shared a lot of info throughout the day (video capture). 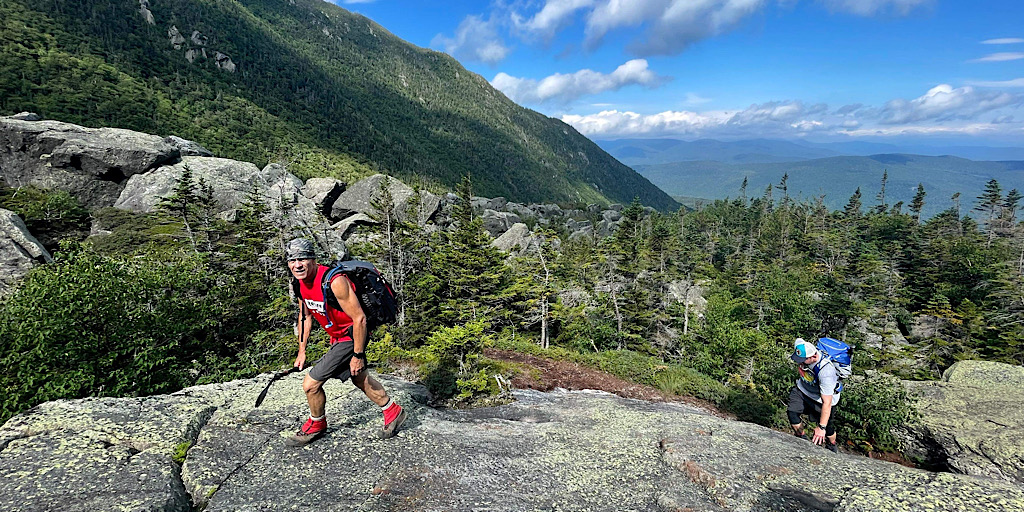 Mike Cherim tearing up some rock. 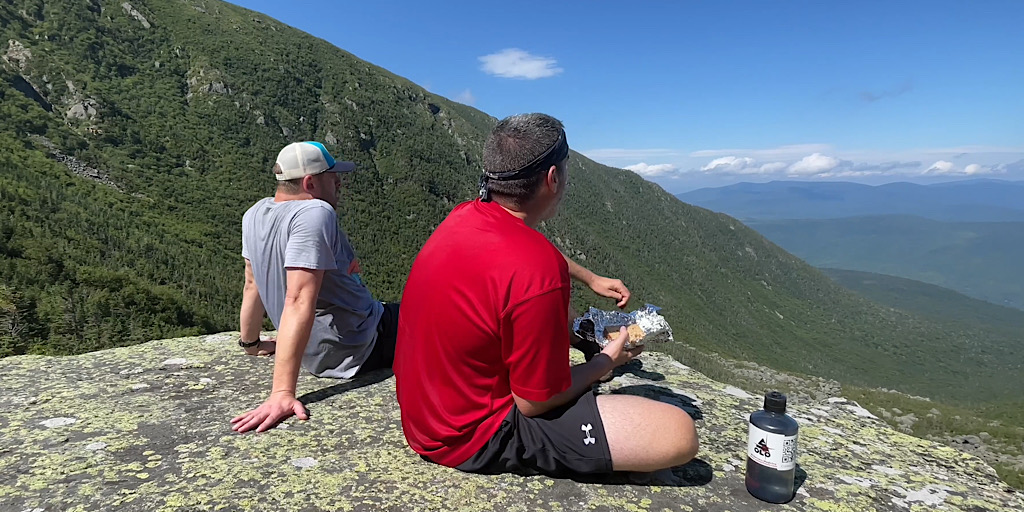 Peanut Butter and Jelly Rock, as some call it (video capture). 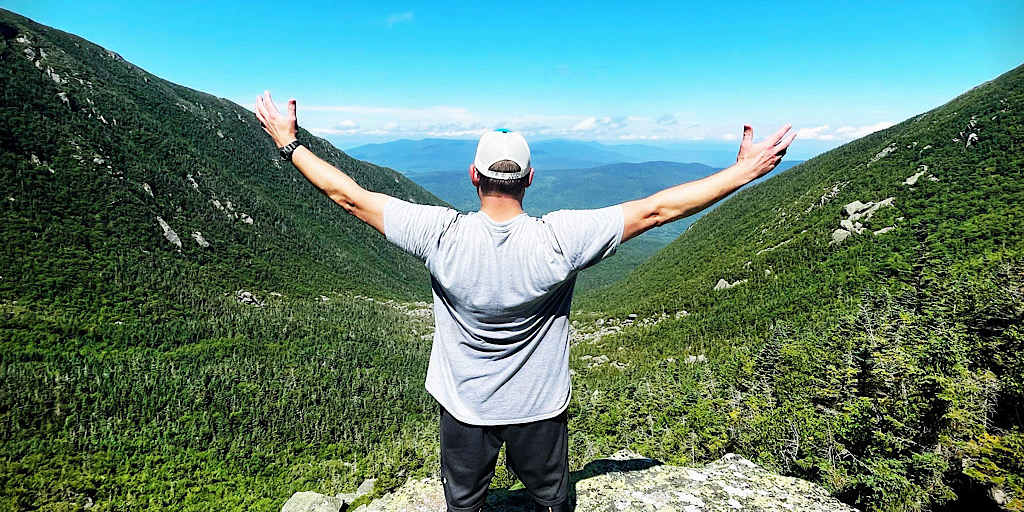 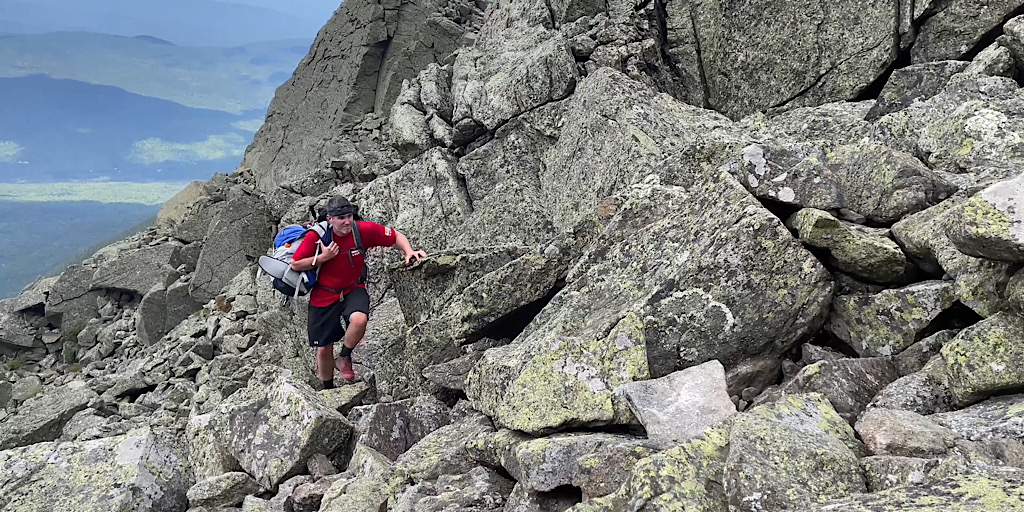 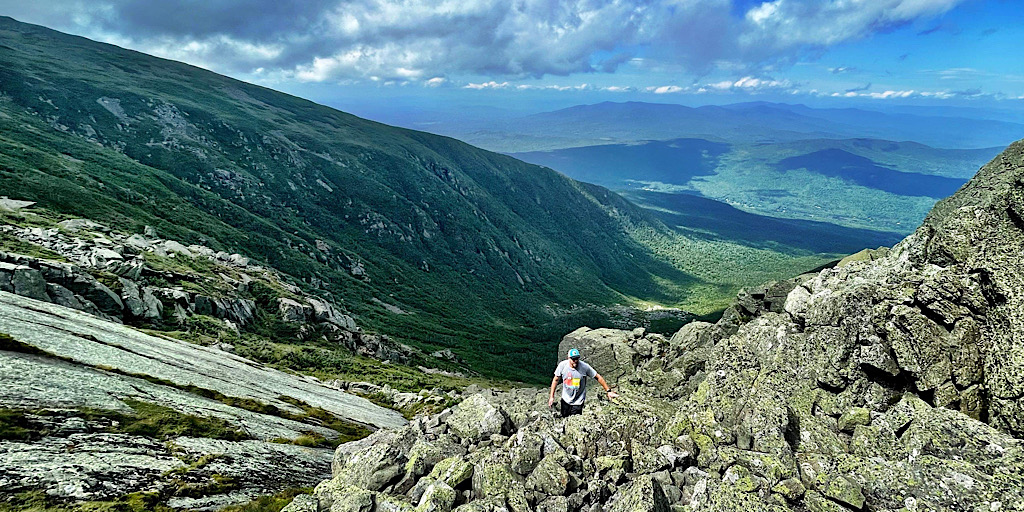 More of a good thing… is gooder. 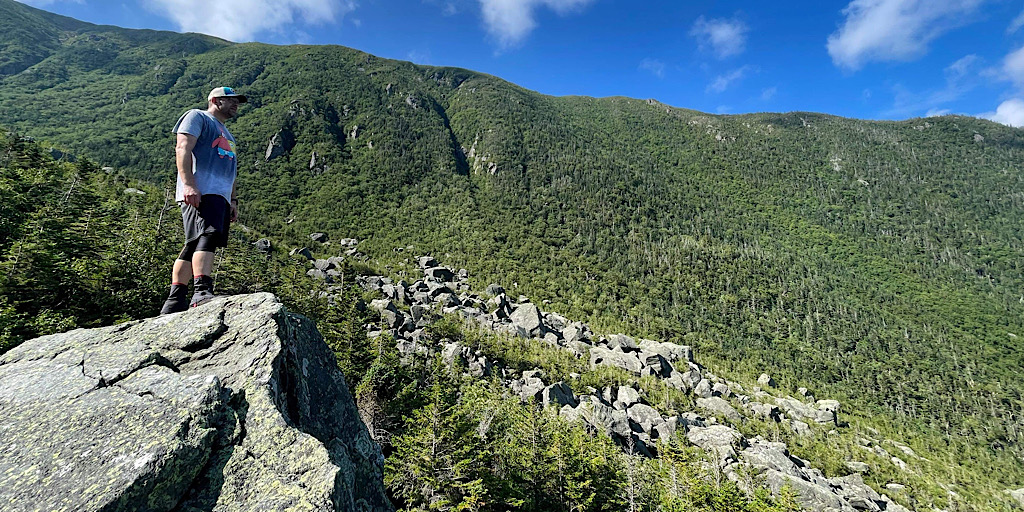 That was fun. Hard, but fun. 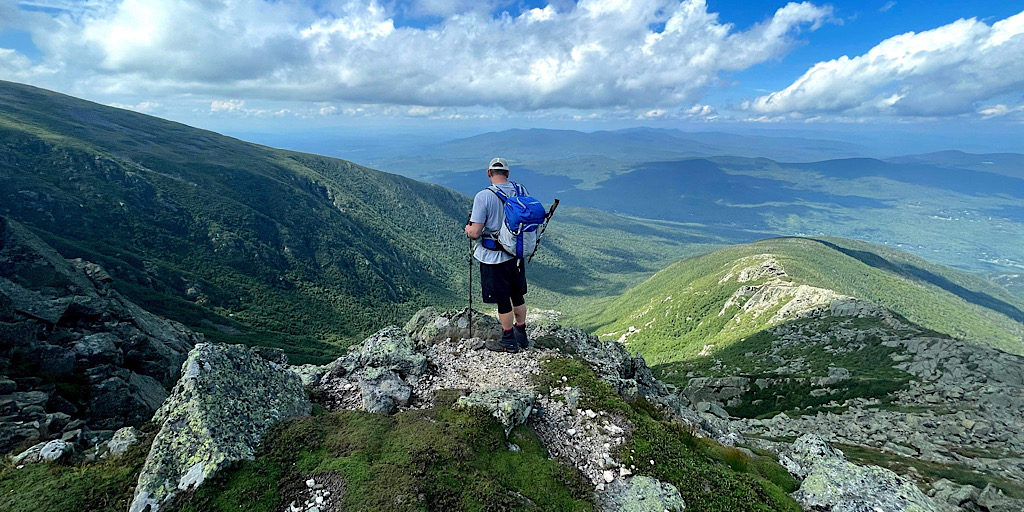 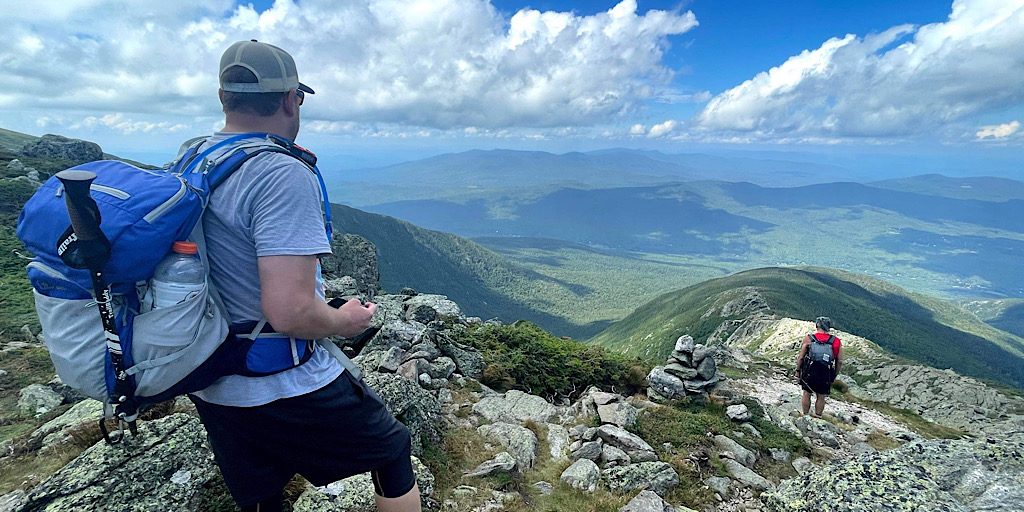 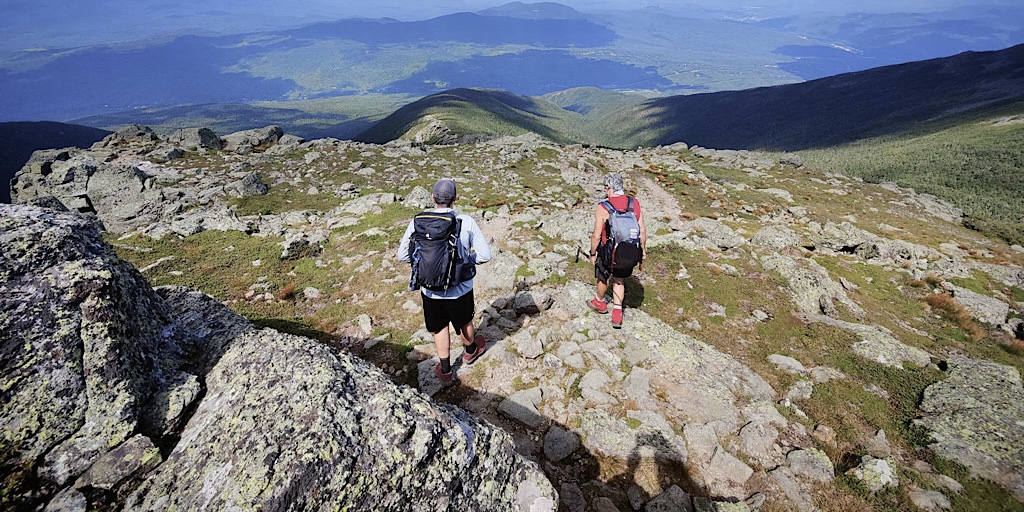 Two Mikes are better than one (guest photo).

Great job everyone, and to our guest, thank you for continuing to adventure with Redline Guiding!