We knew this trip was going to be a unique one when we were contacted by someone with the title of “Elite Lifestyle Manager” looking for assistance setting up an adventure for his client: a New York business man with his teenage son. And it was, from the level of detail to the execution, it certainly offered some variety. It began with a handful of teleconferenced strategy and planning meetings and a fair number of questions. The result was a finely crafted and highly specific backpacking plan. And so it went, led by brand new Redline Guide Nico Dubois (see bio/profile). The plan was a grand one for these first time backpackers, to encompass eight days and seven nights, hiking from the New Hampshire/Vermont border to Kinsman Notch ending their journey with a hike over Mt Moosilauke (4802′) — a rugged NH 4000-footer.

After the plan was fleshed out, their gear needs taken care of and the meals prepped, Nico drove to the Appalachian Trail (AT) crossing on route 25A in west-central New Hampshire. There he navigated into the woods and properly hung a large bear bag. The idea was to stash the final three days of food so they didn’t have to bear the burden of trying to bring it all. Eight days’ worth ends up being a lot of grub. Cache cached, go time was right around the corner. The follow morning they began, Nico meeting our guests at their hotel in Lincoln, NH. From there they caravanned to the Beaver Brook Trailhead in Kinsman Notch dropping off our guest’s car. Using some precautions, they carpooled to Norwich Vermont to the start leaving Nico’s car in a roadside parking spot.

The route led them through the college town of Hanvover, NH, following the 2×6″ white paint blazes marked on telephone poles and the like. After a few bends, twists, and turns, they finally reached the woods where their trail walking began. In this part of New Hampshire the mountains are still hills, the first one, Moose Mountain only reaching to 2222 feet. But now we’re getting ahead of ourselves. Being new to backpacking we wanted to ease them in. Hence the flatter west side start. We also kept day one pretty short leading them as far as the Velvet Rocks Shelter. The next day would be the real start of the more immersive backpacking experience.

The miles were kept pretty low though our plan was further dictated by the availability of tentsites or shelters, keeping it legal. This also, in theory, meant water would be available for drinking, cooking, and eating. As it turned out, becuase things had been dry, the availabity of water was inconsistent to poor. This provided challenges to which they overcame; they carried more. This wore them out a bit, but having done this, we understand. It is one of the challenges of backpacking. One of many as it would turn out.

The days continued, easing in, but then stuff got real. The first major bump in the road: Smarts Mountain (3469′), one of the 52 With A View peaks. They managed it, though, finding that putting one foot in front of the other does indeed get the job done. They wanted to sleep on the summit but the threat of electrical storms keep them on the move so they dropped down to a wilder, more sheltered site. Plus there was no water at the time. That changed, though, it rained torrentially at a rate of 2″ per hour. They got wet but didnt care (their gear was safe). The trip was wearing on them. Their hungers were also gnawing at them as it often does for those backpacking. The spirit of joy was being tested. It happens. The father-son experience alone is worth it, though.

The following day would test them further throwing yet another real mountain at them: Mt Cube (2916′ and another from the aforementioned list). This did them in, however. They decided that they had enough… at least for now. We have no doubt that in time they will look back at this whole experience with more positivity. The negatives become muted and we remember the bonding, the grand views, or other subtleties that touched us. This is known as Type II fun meaning it sucks only while we do it. Afterward it’s an epic we animatedly share with bright eyes and huge smiles for years. From the Mt Cube summit Nico called back to the office with an update, the towel thrown into the ring. Coordinating with our guest’s team, a ride was secured from the 25A crossing that evening.

Some will judge because that’s what people do. They will focus on the giving up part and not acknowledge what led up to it. Let’s recap: They were brand new to backpacking and they chose eight days, seven nights. Most dip their toe in it with a simple overnight. They dove in headfirst. They used a guide to lead the way, to help with planning, and to share some of those precious wilderness skills, but a guide can’t remove the heavy lifting. The guide can’t keep their feet dry in a monsoon. A guide cannot flatten the mountains. And knowing that three more days and Mt Moosilauke stood between them and their original finish line… well, another time. We are pretty impressed with the effort put forth to get done what they had for first time backpackers. Here are a few keepsake photos of the trip taken by Nico (good eye). 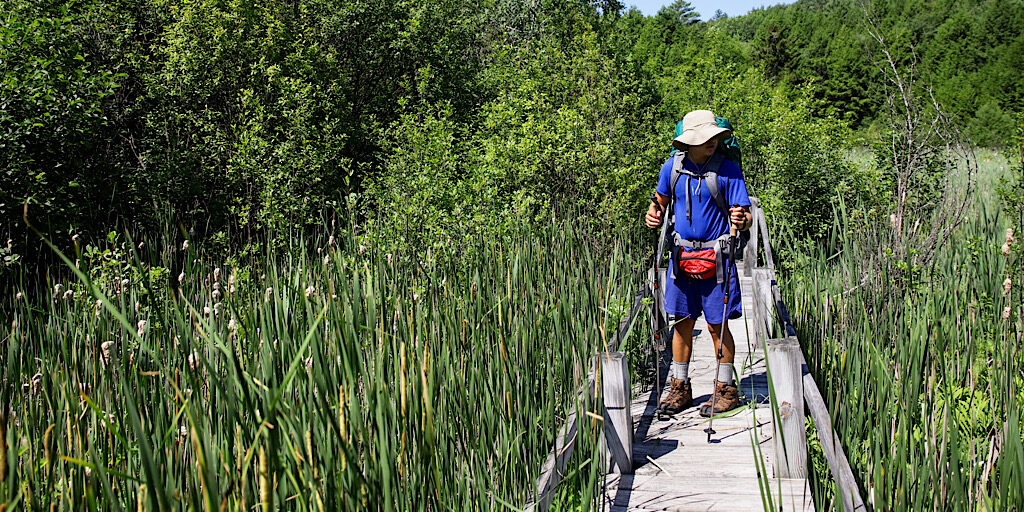 Starts off easy enough. Doesn’t last, though. The toughest mile of the AT is in the State of New Hampshire. 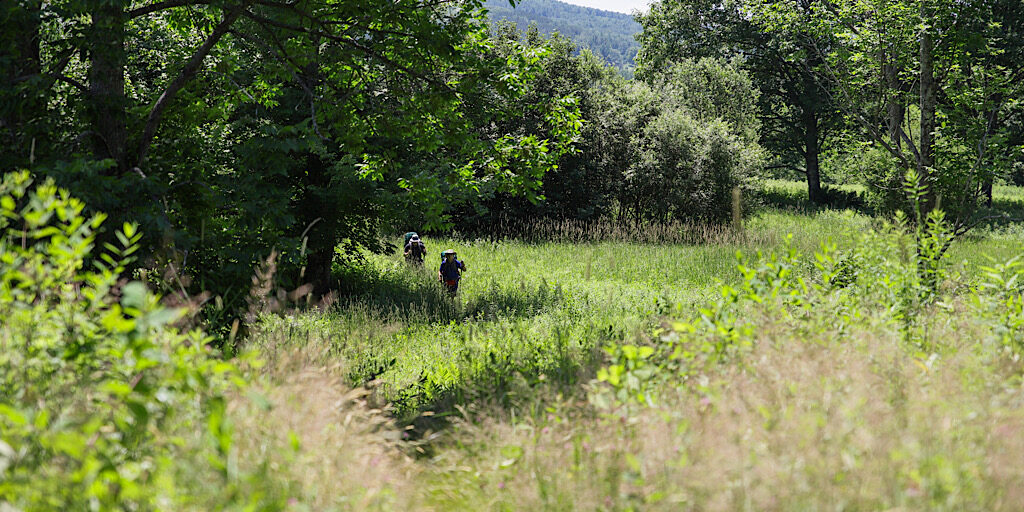 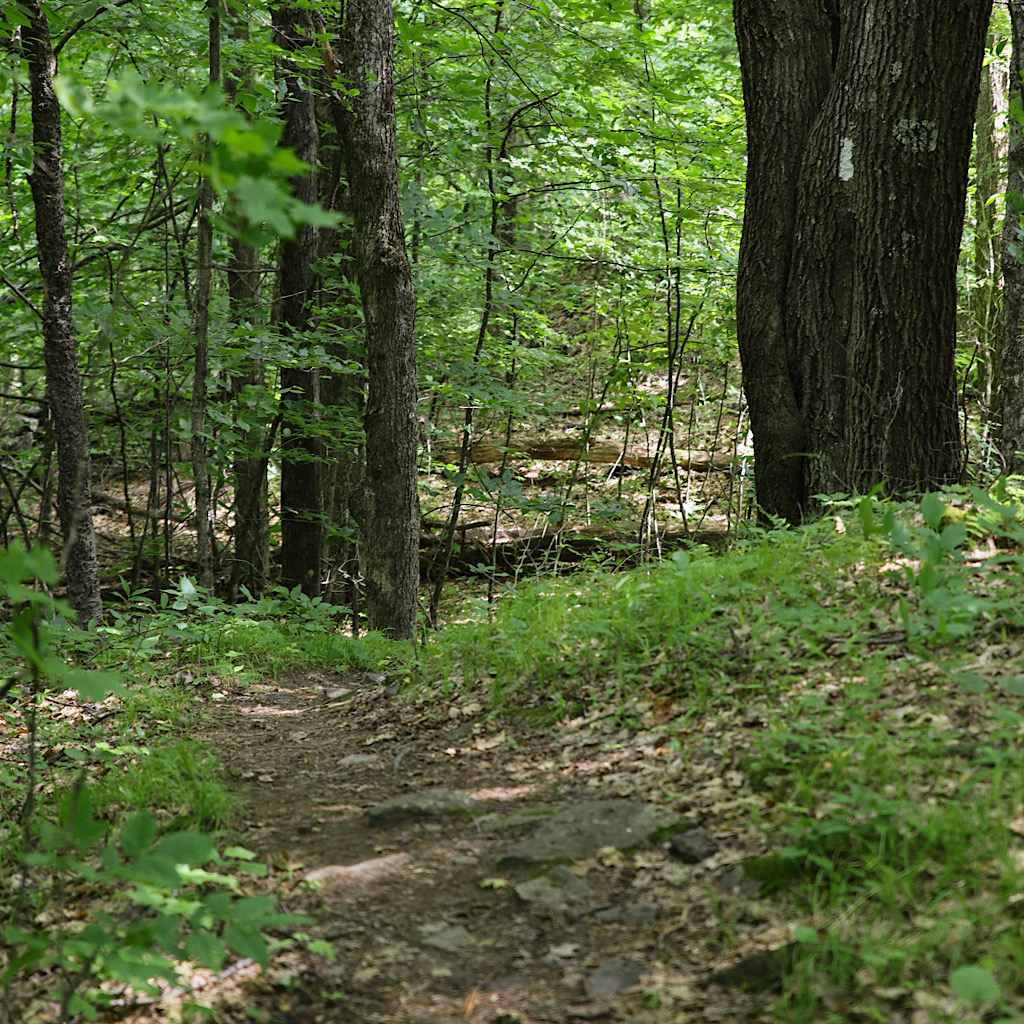 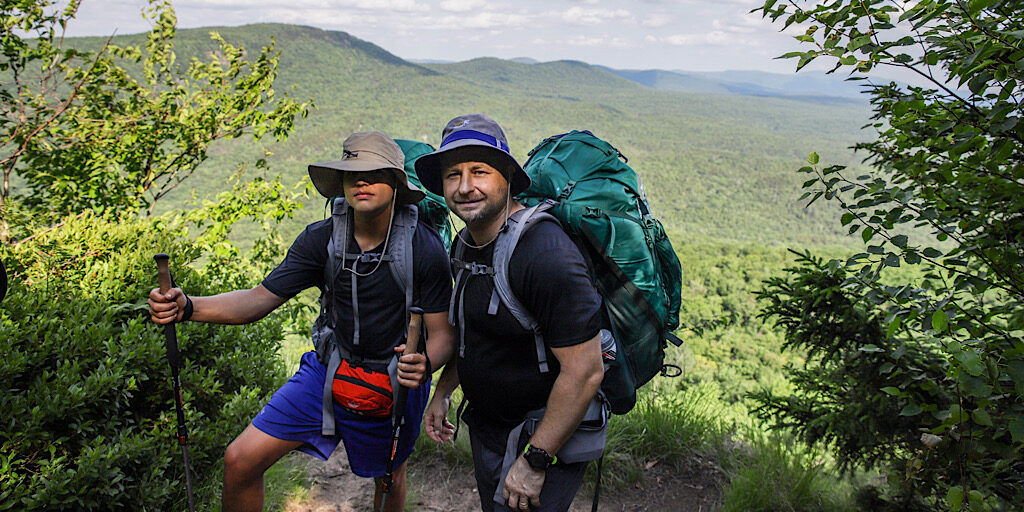 The team atop Smarts Mountain. A storm threat keeps them on the move. 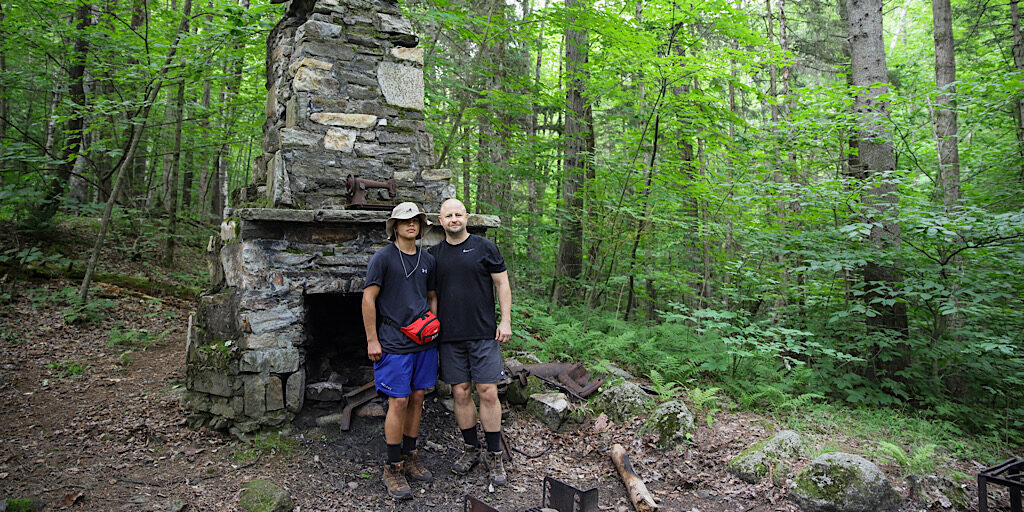 Cooling down by the fireplace. 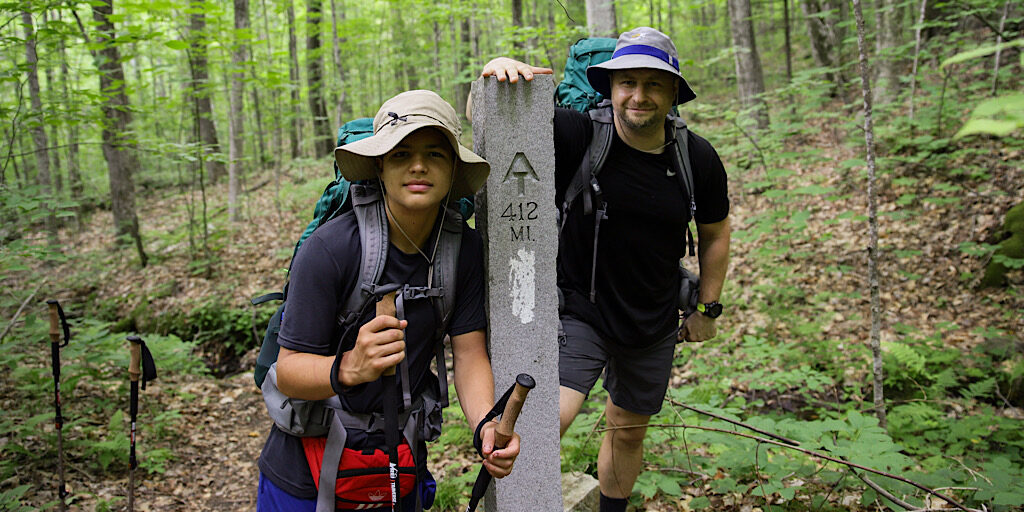 The team stands proud next to an obelisk of progress. 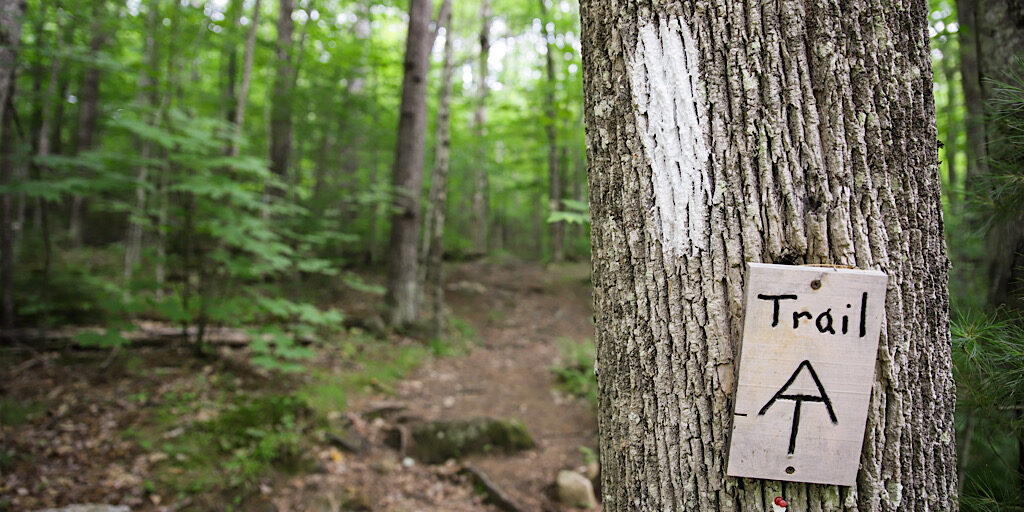 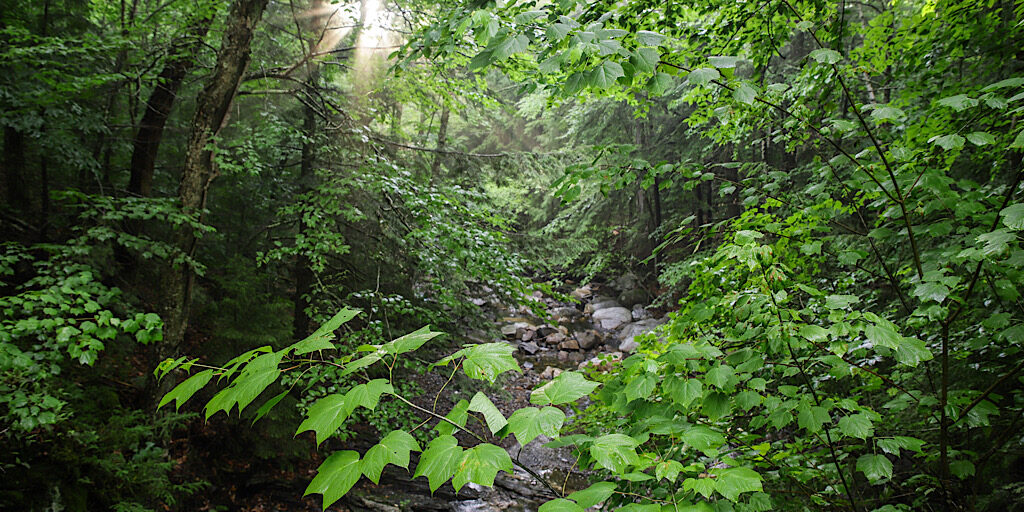 What began as a stroll through the country, now looked like a slog through a hot, wet, and humid jungle. 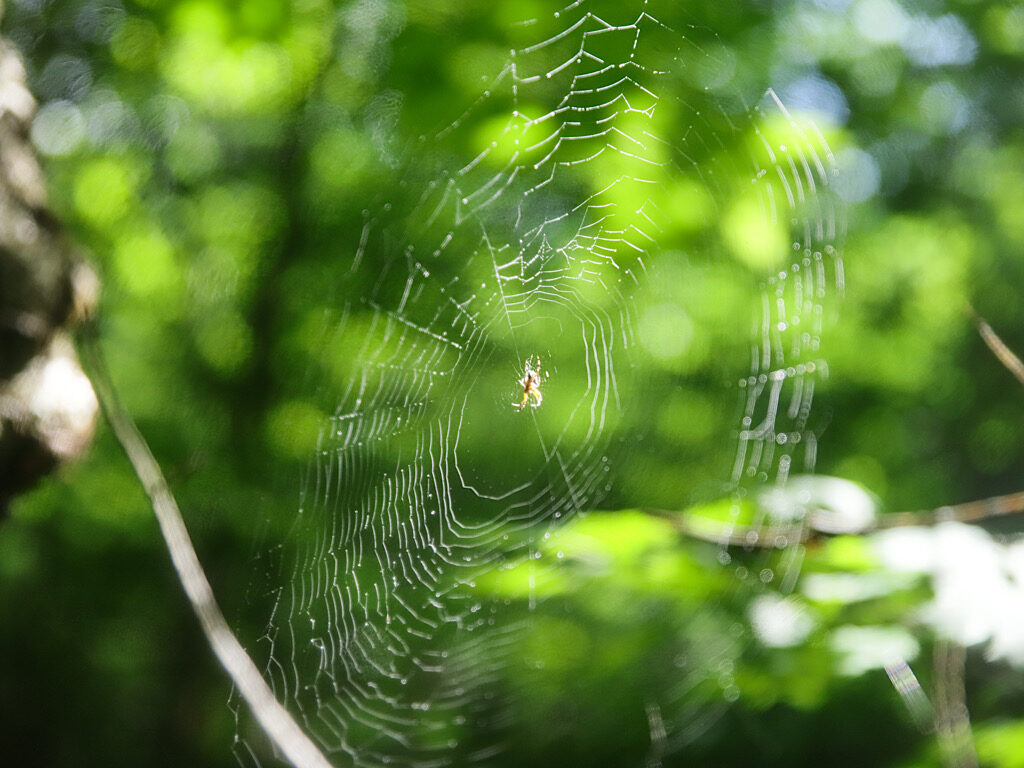 Sometimes it’s best to not look at the big picture and instead focus on the minutia. 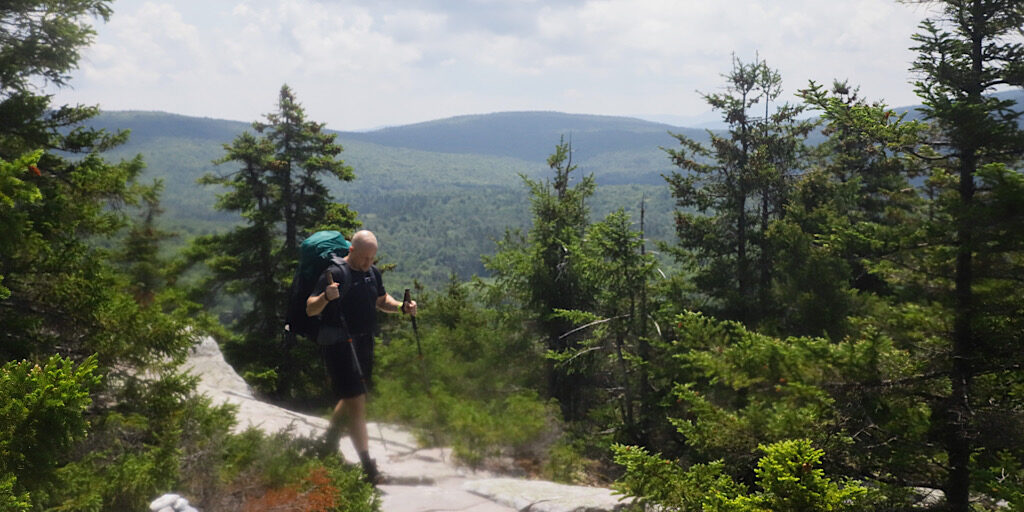 Mt Cube toward the end of the trip, done, the heat and humidity clear in the photo.

Fine lead, Nico. And to the whole team: an excellent effort.