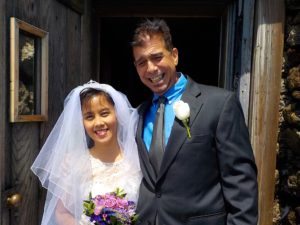 The clouds formed a sea of white all around and below us. It was as if the 6288′ (1917m) Mount Washington summit on which we stood was an island. The thick clouds all around us figuratively lapping at our shores like water. Peering outward from our place a few islands were visible. 4000-footers like Carter Dome and Mount Lafayette rose above the clouds. The phenomenon described, of course, is an “undercast” — which is the opposite of an overcast. Another descriptor might be blessing. This flipping of the norm is both atypical and remarkable in its beauty. We were all lucky to have it.

Blessings are a good thing. Especially when our reason to be up there, despite a less-than-awesome forecast, was to perform a marriage ceremony — officiated by New Hampshire Justice of the Peace and Redline Guiding owner Mike Cherim. A joining of two souls; a blessing in of itself. To experience such a thing as an undercast on your wedding day is beyond compare. Our couple, Philip and Rosalie (or “YeYe” as everyone called her) nailed it perfectly.

With the wedding party we rode up on the Cog. This gave us about an hour on the summit to perform the marriage, take summit photos, and take in an impromptu weather station tour led by our friend Samantha Brady who works up there for the Observatory. The ceremony was held in the doorway of the Tip-Top House, which was kindly opened for us by another friend, Guy Jubinville. He works for the Mt Washington State Park on the summit and was very accommodating. Afterward most of the party got back on the train to head down. The groom, however, along with two of his friends, brought their skis (Redline Guide Ryan Mcguire shuttled them up) so they could ski down Left Gully in Tuckerman Ravine. Their experience with that is their story to tell, we weren’t guiding them, we just facilitated the thing. 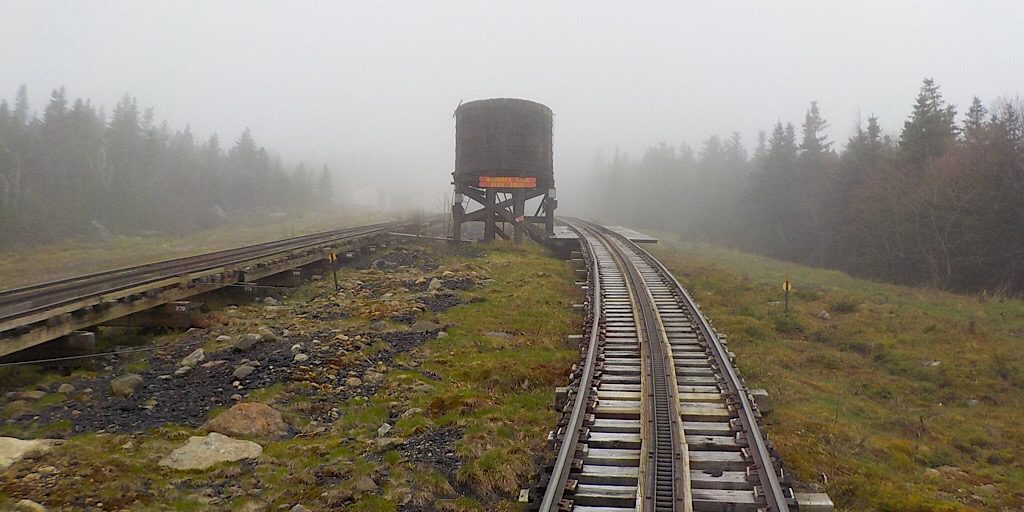 Slush was reported on the summit. The fog was already obvious. 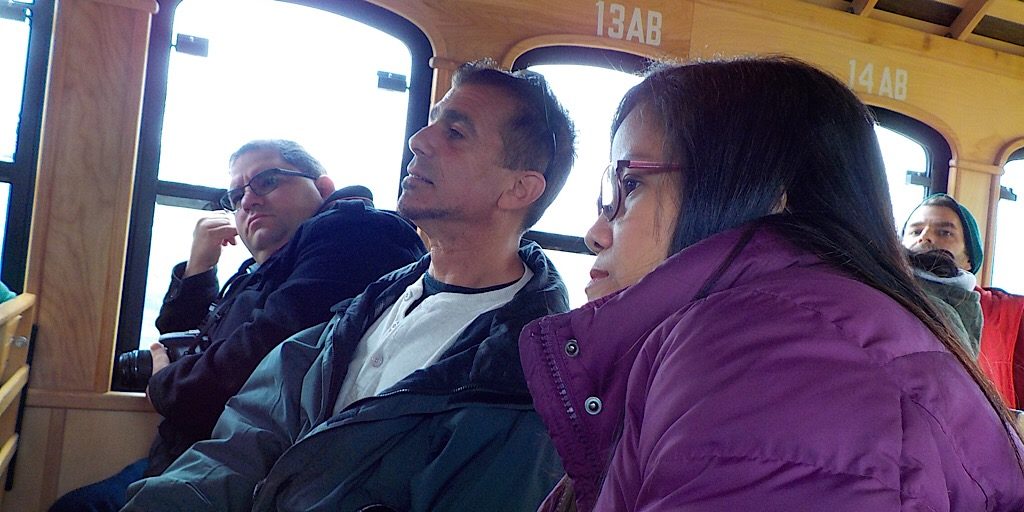 We all look ahead trying to peer into the fog. 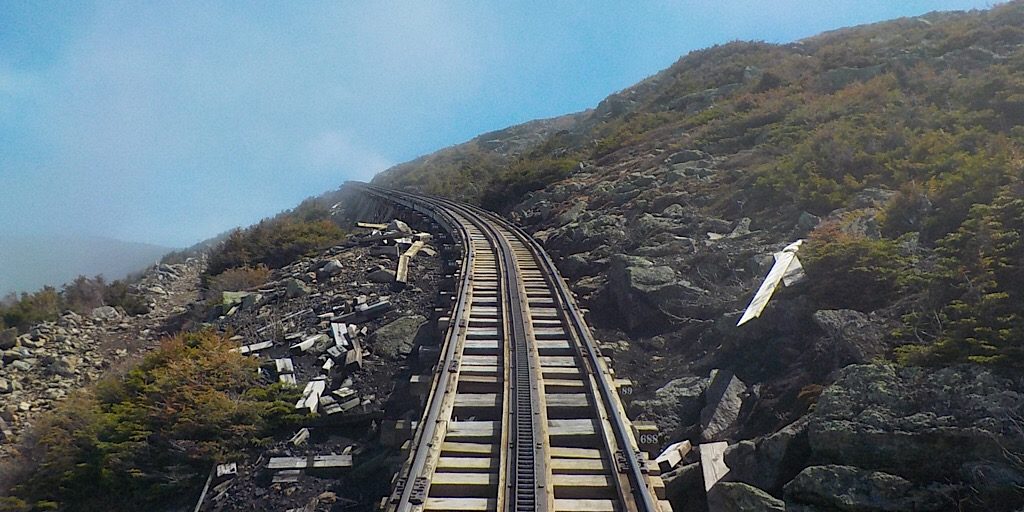 We begin poking out of the top of the clouds. Very magical. 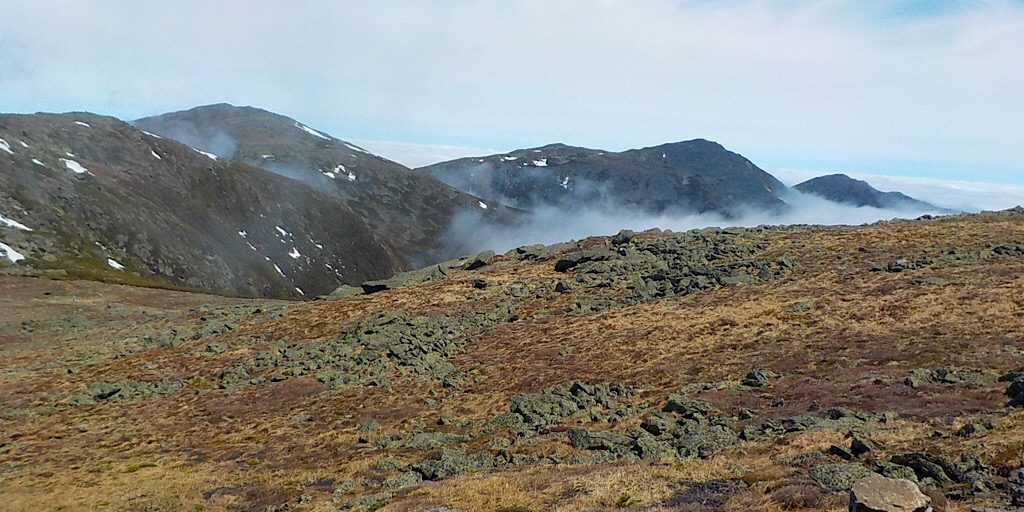 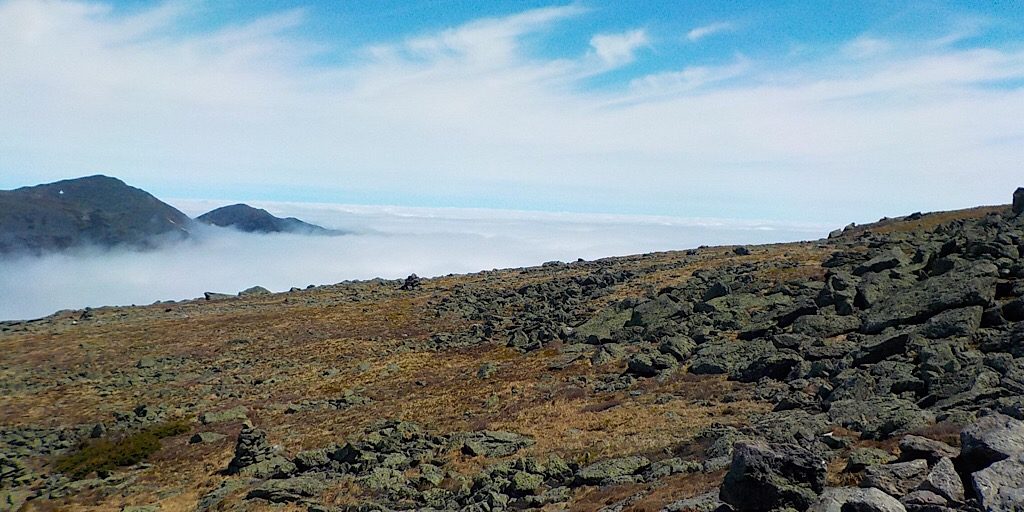 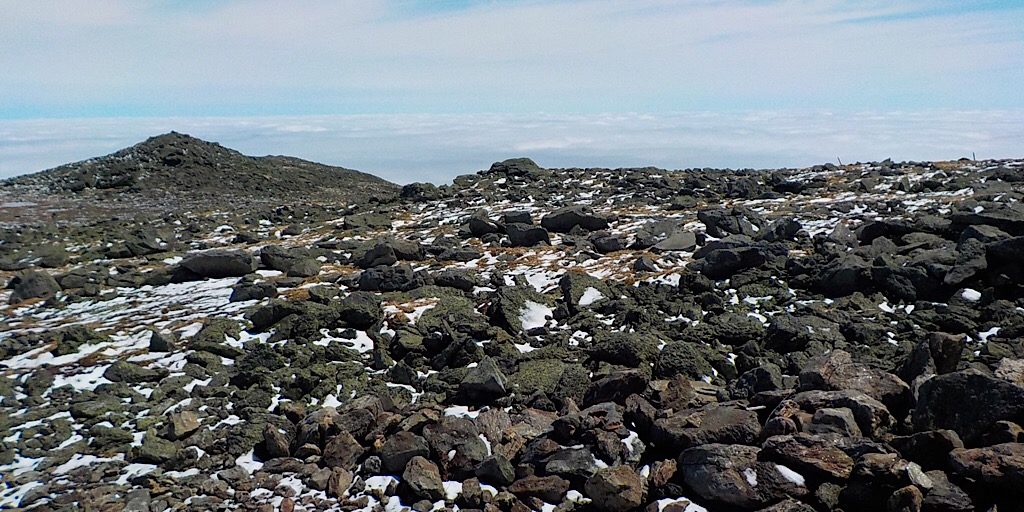 Ball Crag (Nelson Crag lies beyond but is hidden from view). 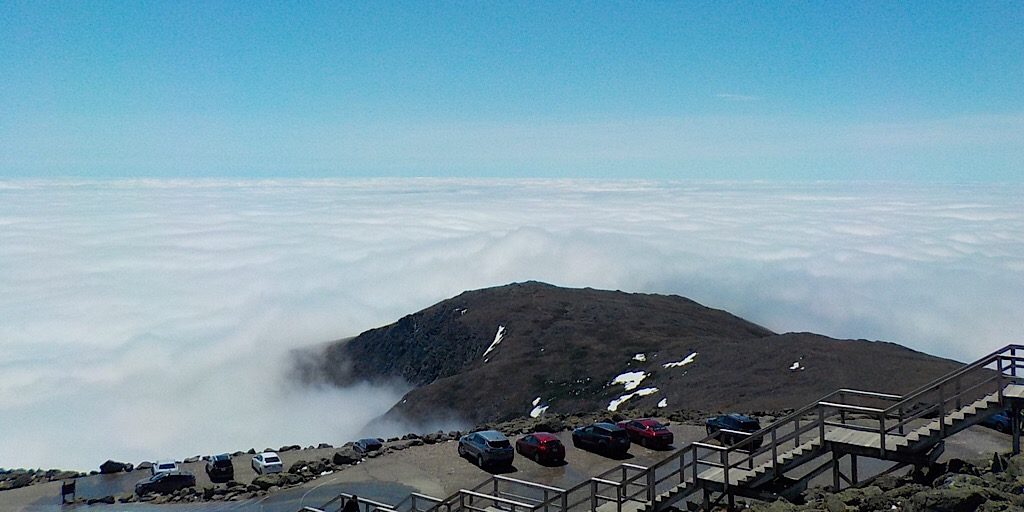 To the south-southeast, nothing was visible beyond Boott Spur. 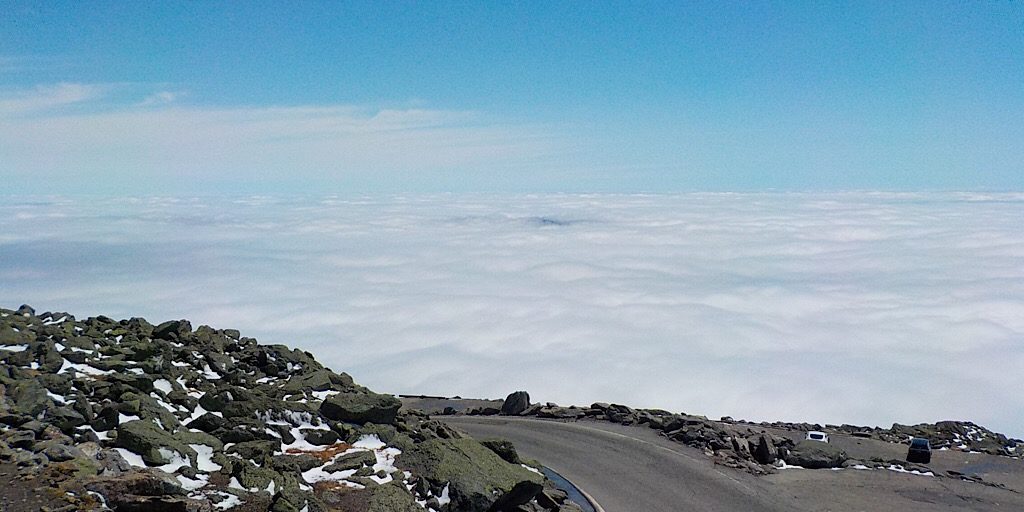 To the east Carter Dome is barely visible. 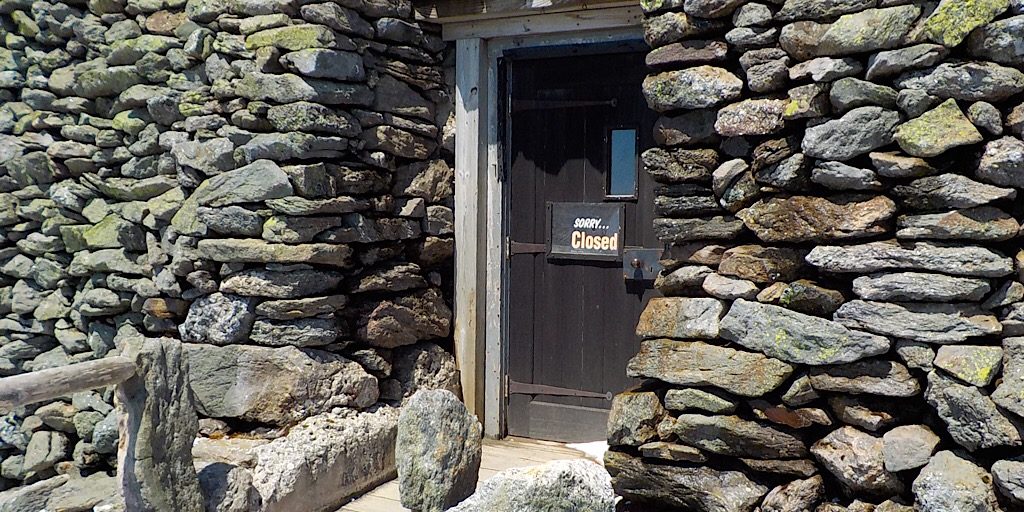 The Tip Top House… our altar. 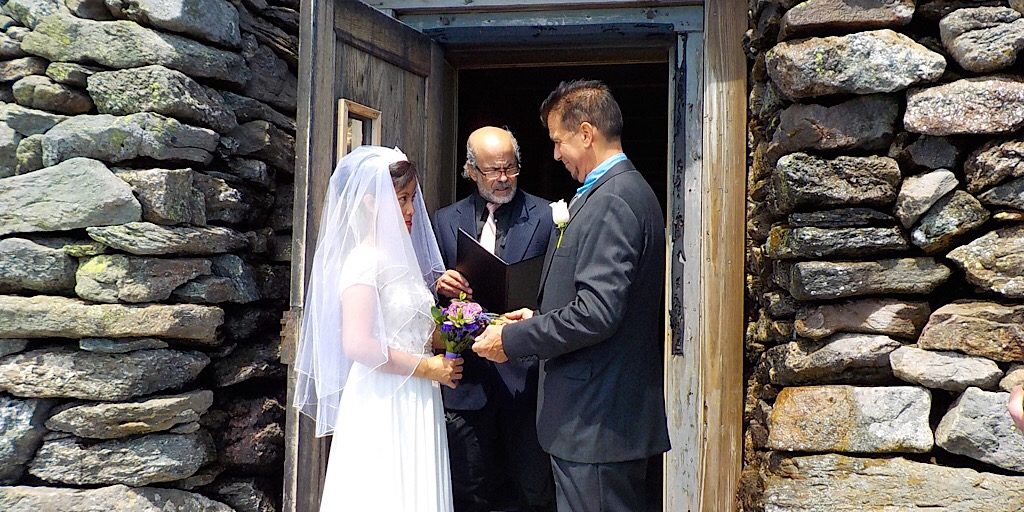 The nuptials. Photo by Barb Cherim. 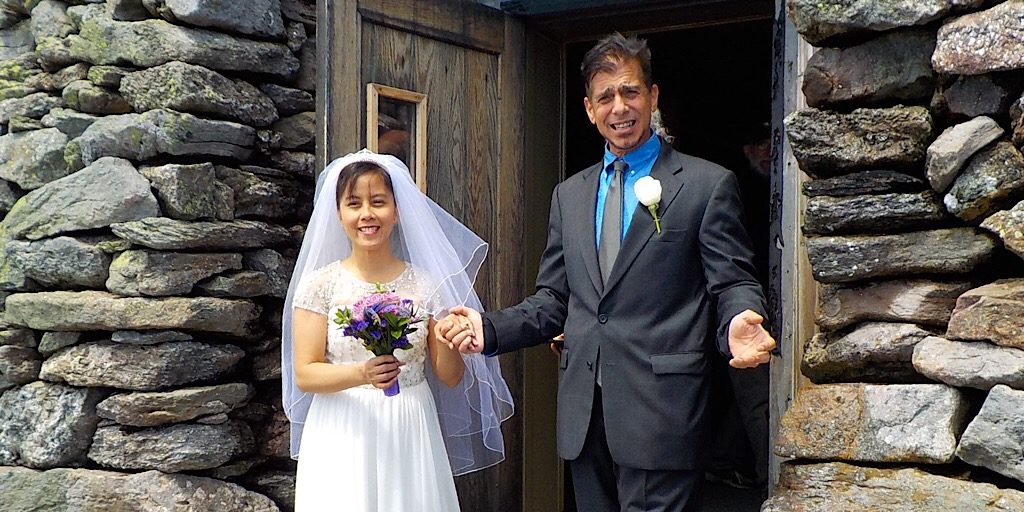 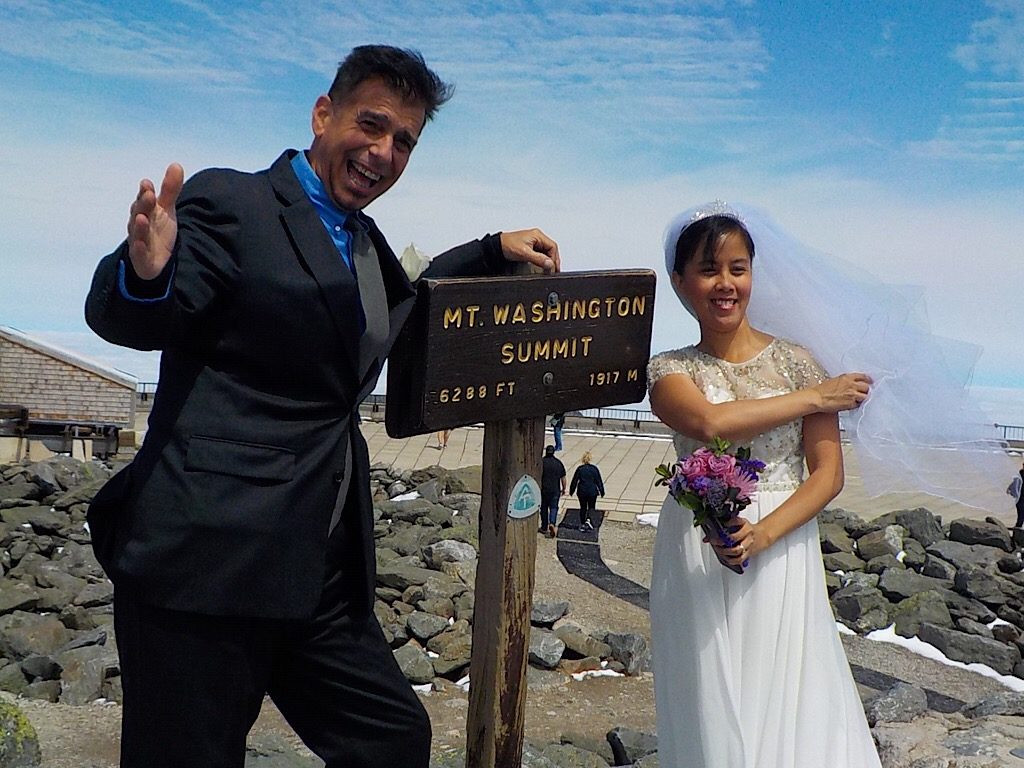 Mister and missus on the summit. Congratulations!

Thanks for making us part of your special day (and evening), and may all your days together be blessed.