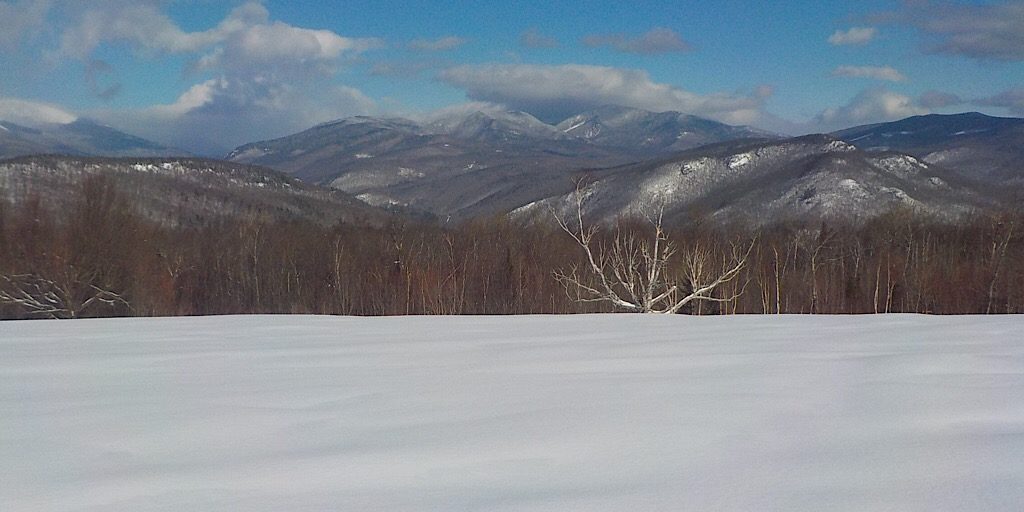 Skiing in the backcountry or snowshoeing, either was fine. Whichever, Sarah told us, as long as it was fun for her and her wife, Christy — whose recent birthday was the cause for this celebratory adventure. She didn’t want something too over the top in terms of being adrenaline-inducing. In other words, let’s stick to some “type one” fun that we can enjoy while we’re doing it. Well, thanks to a recent snow and excellent backcountry ski conditions tested the day prior, and having a cool place to go that Christy might consider fairly easy and unintimidating (we hoped), we knew the skiing would be a worthwhile start for the day. They agreed to try. Sarah was a sidecountry vet, but Christy was less confident so we wanted to be careful and considerate.

After a breakfast at the Sunrise Shack we headed to the Eagle Mountain House in Jackson and then off to what we like to call Rusty Hill. There’s a winter-closed road that goes up that hill that doesn’t get too tracked out and on many days will yield a pleasant stash of powder. On this particular day, we learned, it had been flattened in the middle a bit by a couple of snowmobiles but was still in great shape. Plus the sides were soft and not being too sun kissed the day before hadn’t formed a very strong crust. This meant we would get to relax and lazily surf the pow all the way to the bottom.

So that’s what we did after skinning our way up: we skied it down, surfed the pow, laughing all the way. We noted Christy skied it in a way that suggested she wasn’t fully at ease and told us so when the leader Redline Guide Mike Cherim asked. For backcountry the way was wide, but it could have been wider. Nonetheless we saw a successful ascent and descent, and of great importance, we noted a big smile all the way down. That spoke volumes.

For Christy, however, it was a one-and-done. For that day, anyway. She kindly invited Sarah and Mike to take another lap, but they would have none of it. A better idea, Mike thought, was to swing by the Glen Ledge Store for lunch before heading to Cathedral Ledge in North Conway for a nice snowshoe hike up that feature’s winter-closed auto road (this could have been another ski tour). That, too, proved to be an awesome experience. Great views, mild temperatures, excellent snowshoeing. 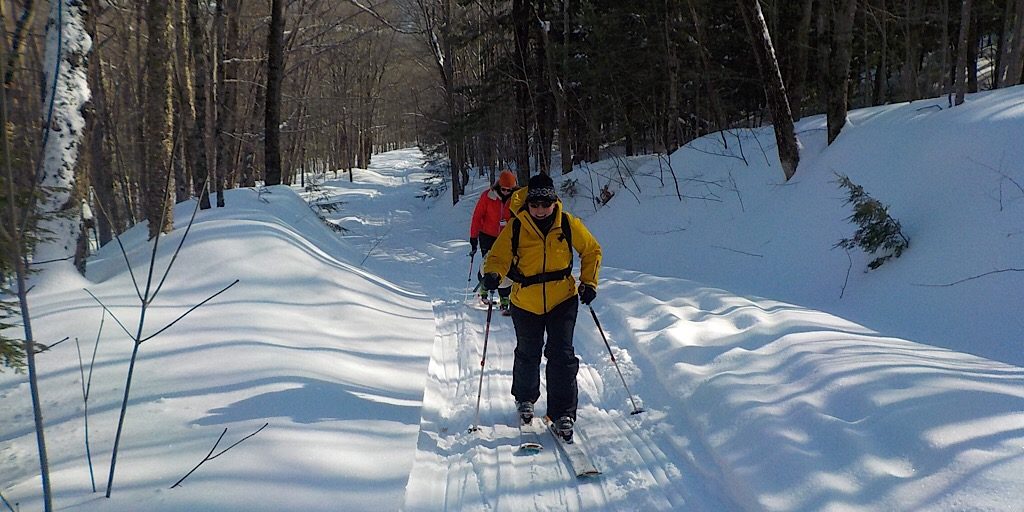 Skinning up a mountain on such a nice day. Awesome! 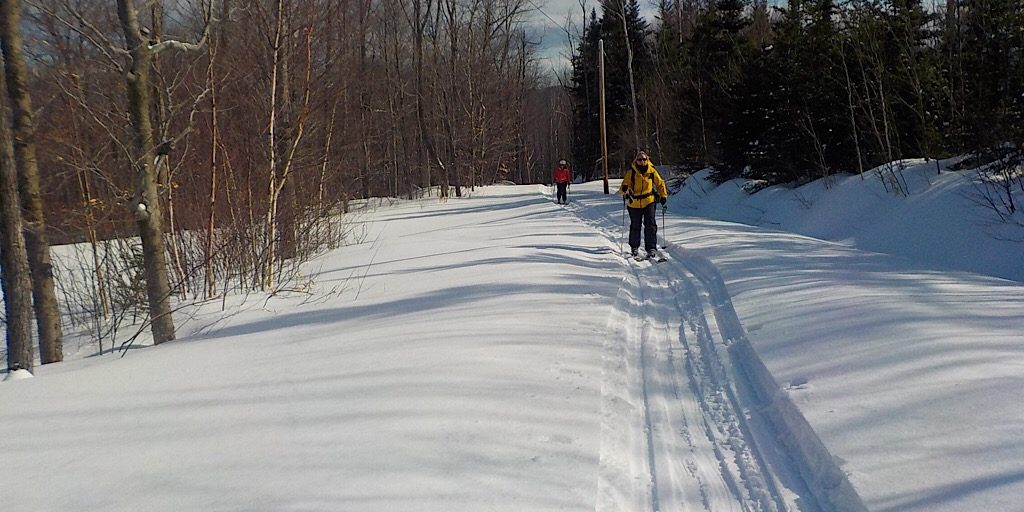 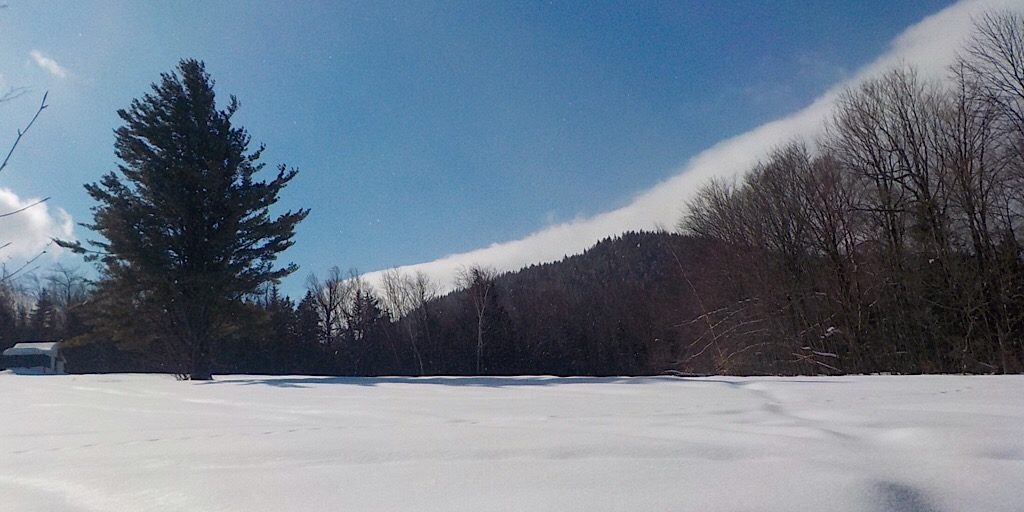 There it is, the namesake Rusty Hill. 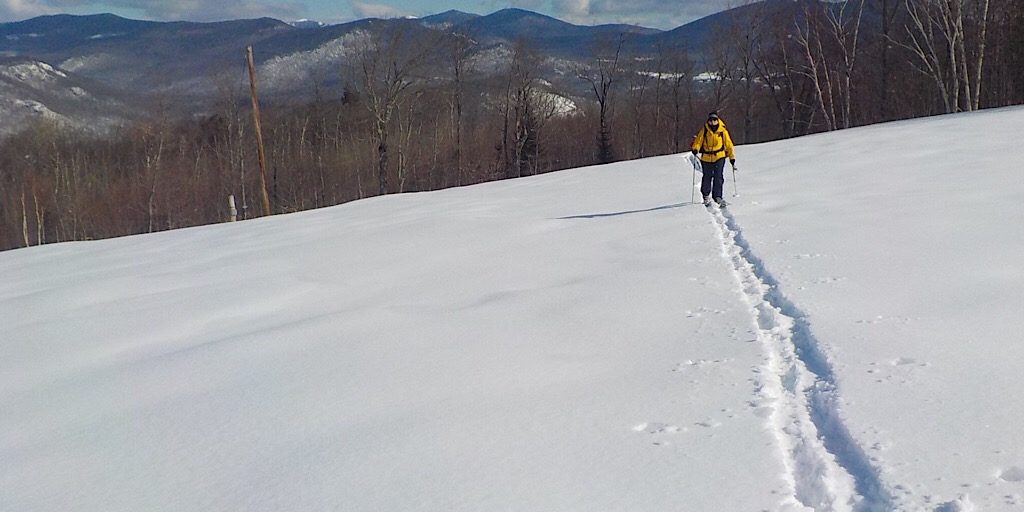 Reaching for the launch pad. 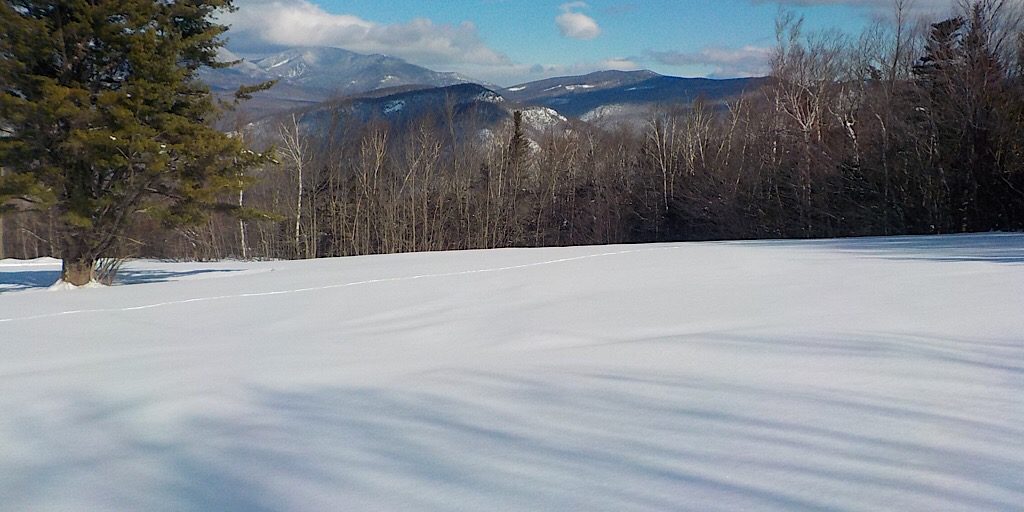 The skis a tool of the artist, the snowy field a blank canvas awaiting first touch. Sarah and Christy go first. 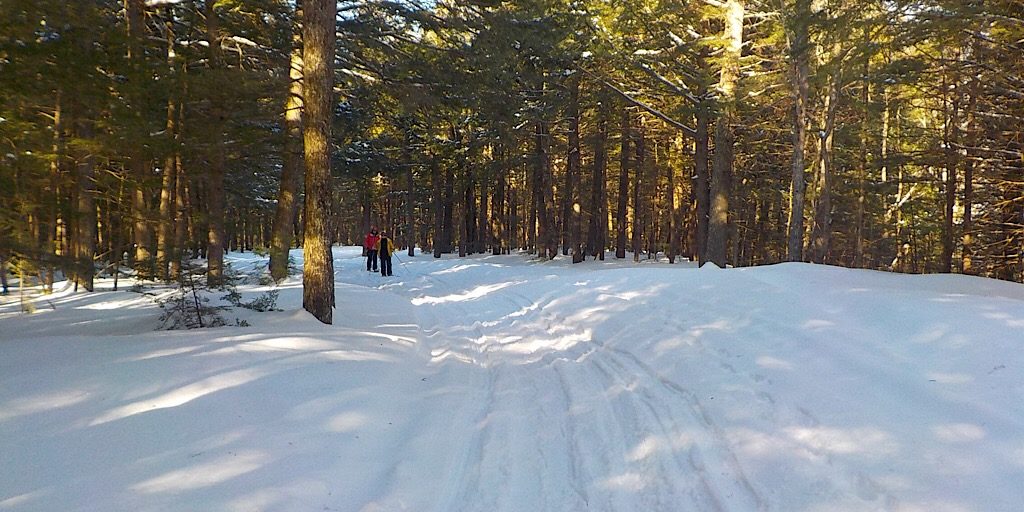 After lunch we head to Cathedral Ledge. 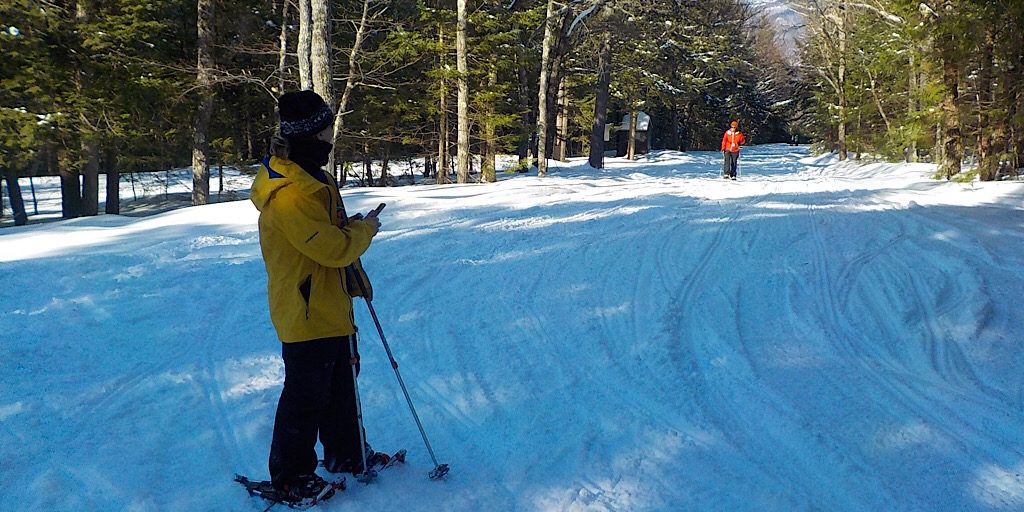 The auto road makes for an easy mile-plus walk in. 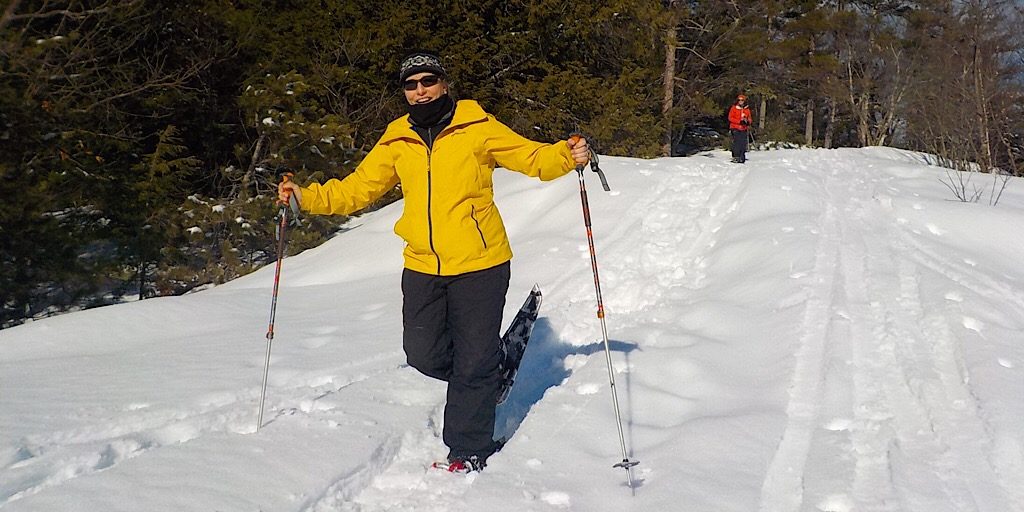 We replaced the skis with snowshoes, but we could have skied this as well. 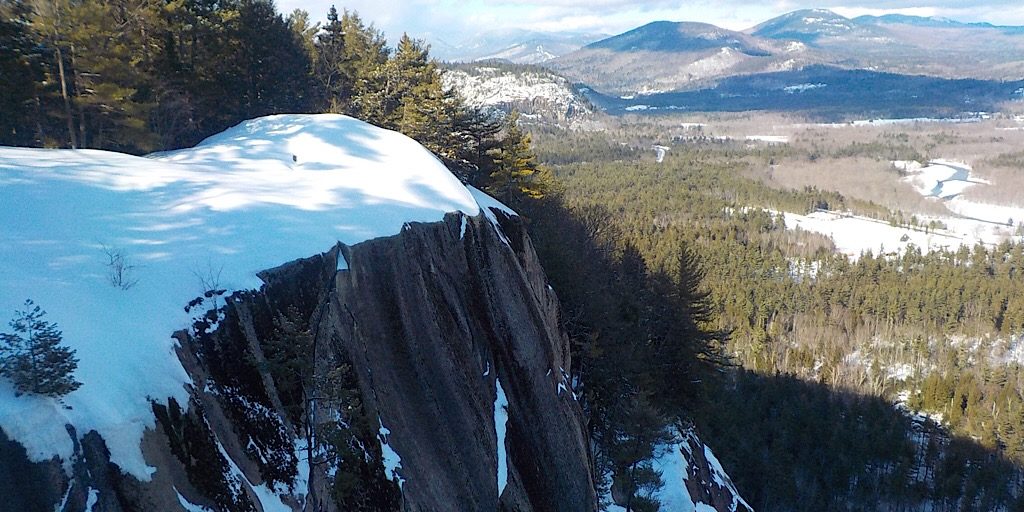 A fine view from atop this iconic North Conway perch. 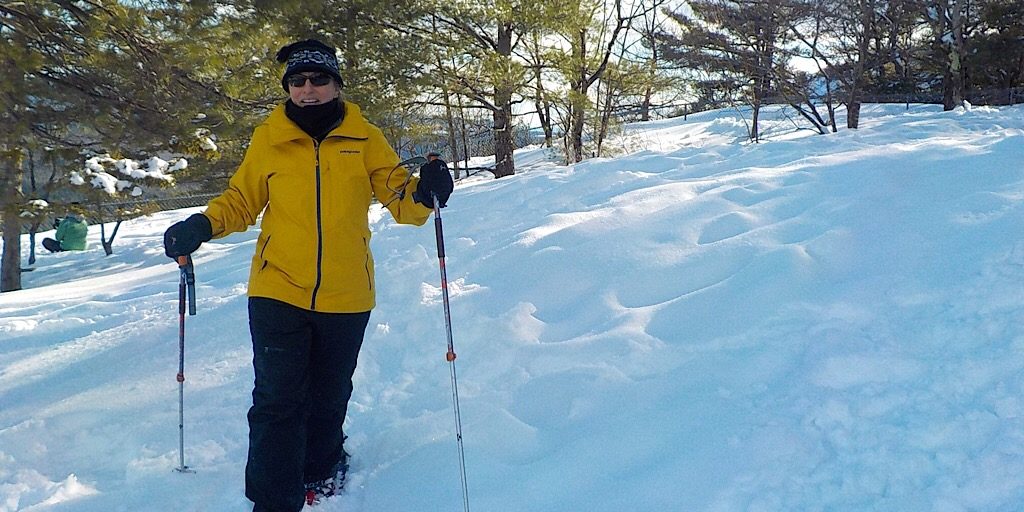 Great day for this. Our guests are happy. 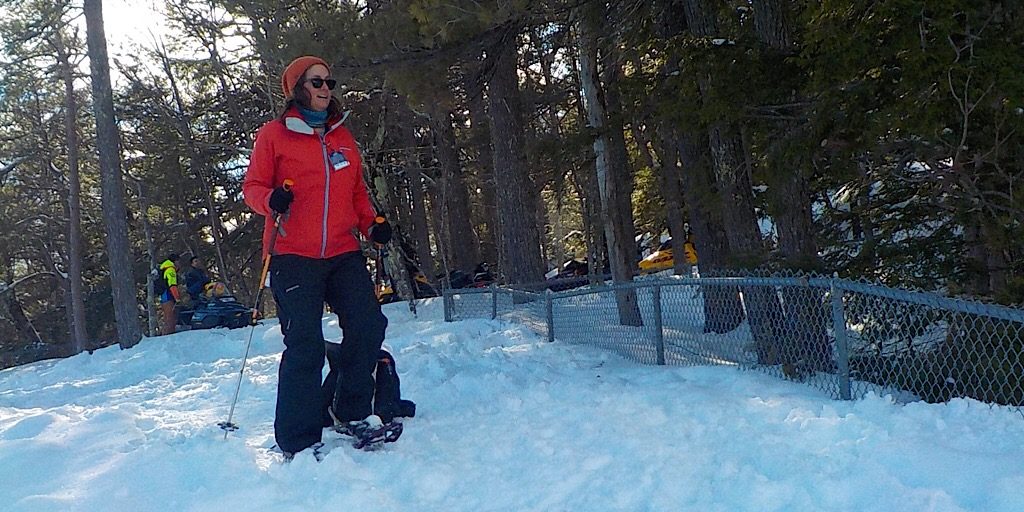 Thanks for choosing Redline Guiding!