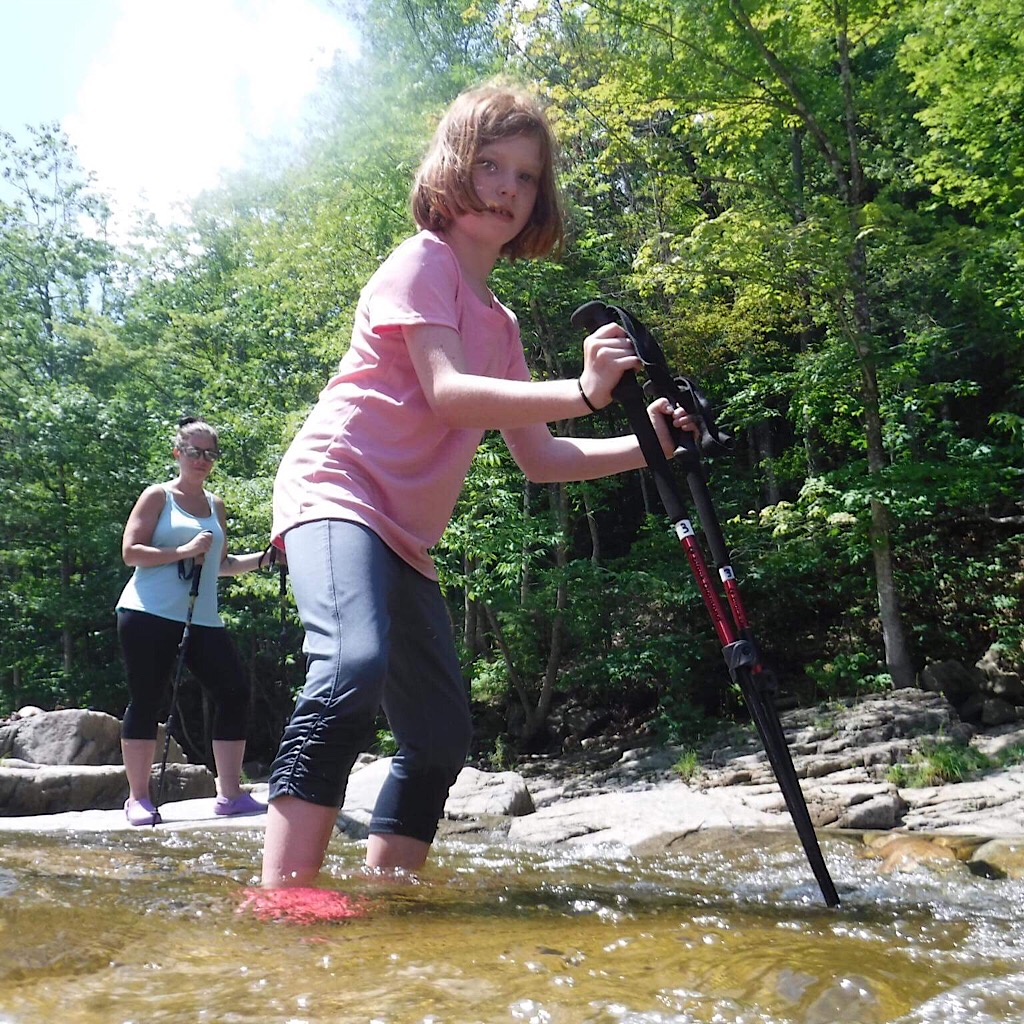 At eight, Addisen now has a ton of helpful know-how and accompanying confidence in crossing rivers.

We originally had a full class for today’s half-day women’s-only River Crossing Skills course — put on for the NH Women’s Hiking Group (a.k.a. the Purple Army) — but two of the members decided to take our map and compass course instead. That left us with a grand total of two eager students… and that was totally enough to make it a fun and worthwhile day for all. Teaching the course was Redline Guide and owner Mike Cherim. The students were Jocelyn and her eight-year-old daughter, Addisen — two somewhat new hikers from southern New Hampshire.

After meeting in the morning the three discussed the various preparations needed before one crosses rivers. For instance, lining your pack with a trash compactor bag to keep your stuff dry, noting the weather throughout the day and its effect on water levels, simple things like tightening your trekking poles before trusting them to support you, and more. Matters of safety, of course, were high on the list. Number one, in fact.

Once everything was all set the trio caravanned to the trailhead of the Mountain Pond Loop Trail — a trail that Mike voluntarily maintains for the US Forest Service — and began hiking in. Before long the trail which started tame, was more like a rocky, stream bed. Perfect to learn the art and science of rock hopping. Learning to stay on those points and ridges and to plan ahead, picking a line, much the way a trail runner does.

[…] once you stop demanding your footwear do the impossible, it’ll stop failing you.

After spending a suitable amount of time without the water element, it was time to perform a long crossing on slippery rocks over an actual stream. A real test. Gladly neither Jocelyn nor Addisen asked their footwear to defy the laws of physics — an all-too-common mistake — so their feet stayed where they put them. After all, once you stop demanding your footwear do the impossible, it’ll stop failing you. With great success they applied all that they learned and were doing quite well so far. Time to move on.

From there the three traveled again this time heading to a vantage point overlooking a point further downstream on the same river — Slippery Brook — so they could discuss fluid dynamics, how bends affect depth, underground flow and volume, how to read the water to figure out where one might cross if fording, when to cross versus when not to, and quite a bit more.

Again on the move they drove to their final classroom lower down on the same river to an area known as Flat Rocks so as to practice more rock hopping then move on to actually fording the river at various depths using one-, two-, and three-person methods. They did quite well with all of it and should now be in a much better position when it comes to backcountry river crossings. Here are a few more photos from the day. 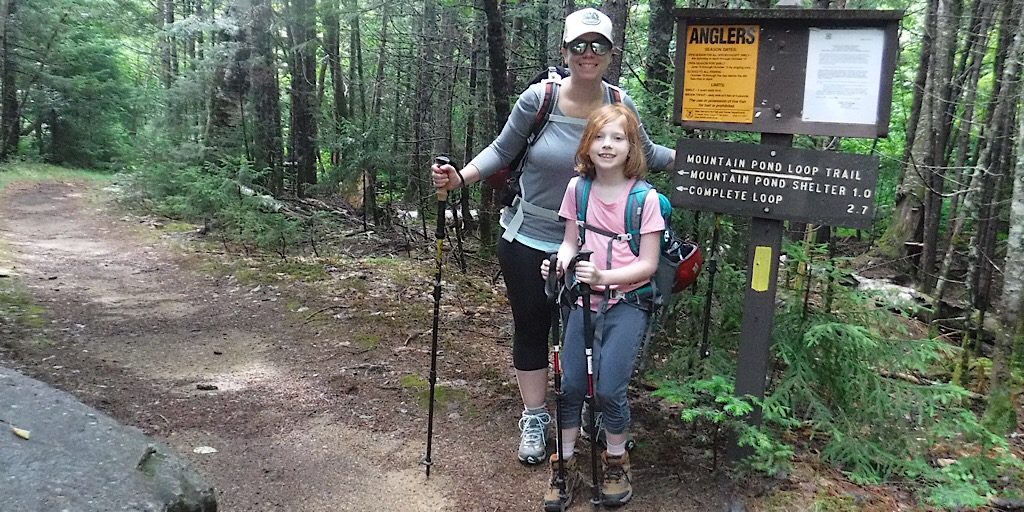 Starting out dry and free of mud. Spoiler alert: they stay clean all day. 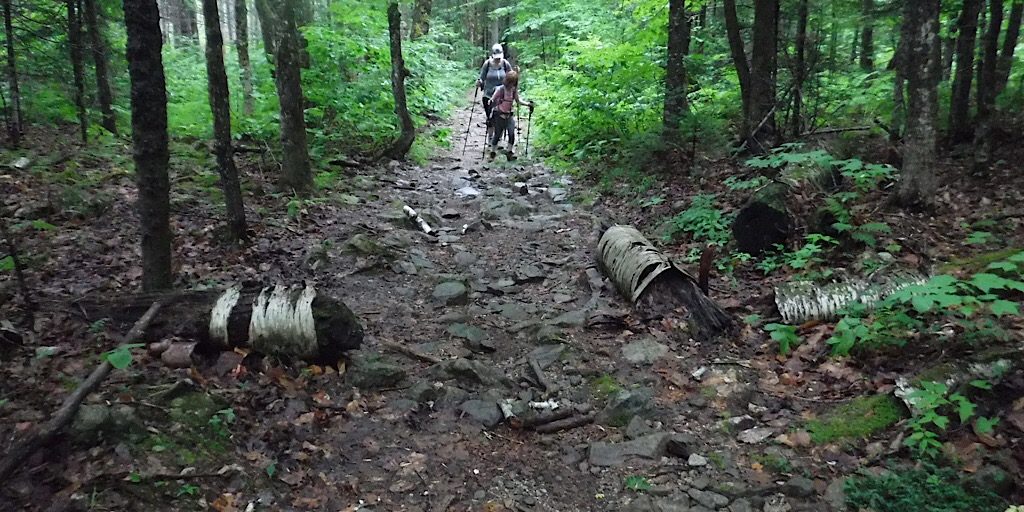 The rocks on trail start small. This is a perfect place to begin this class. 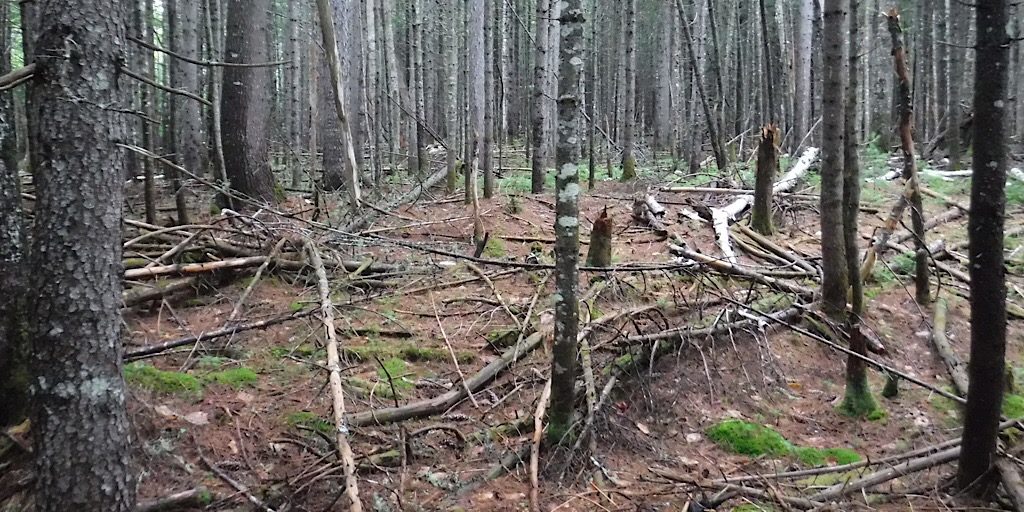 The forests along parts of the trail are lovely. 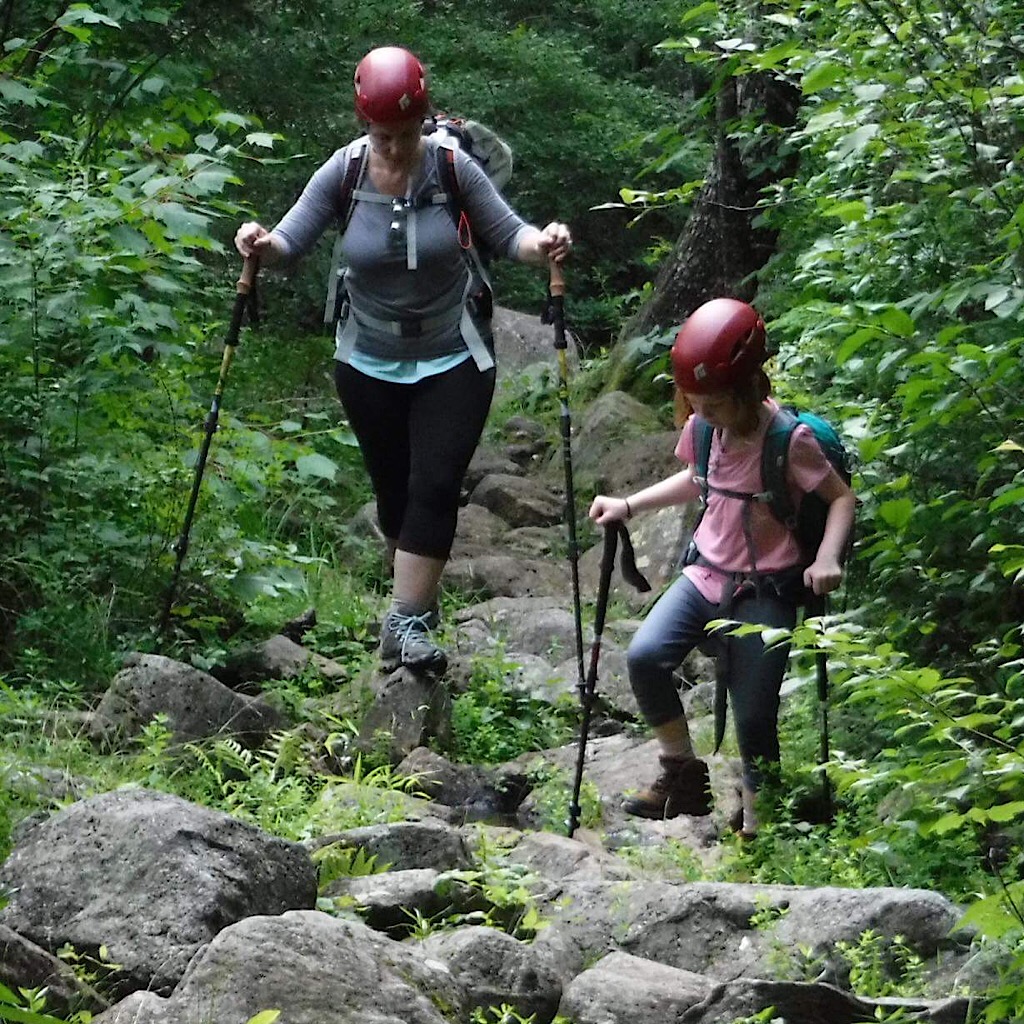 Starting the crossing on larger, slippery rocks, we don helmets until we gain more confidence. 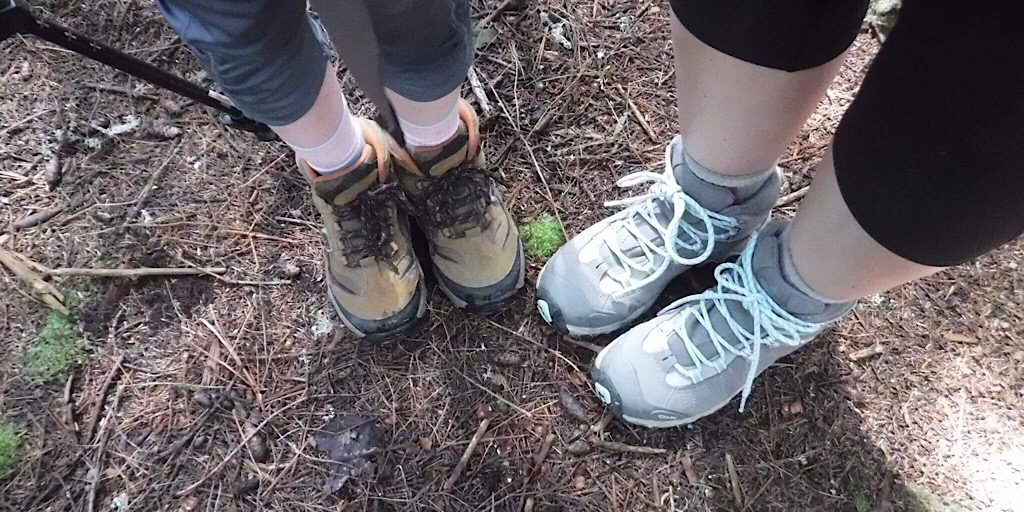 One slimy, muddy crossing later and our team is obviously doing well. 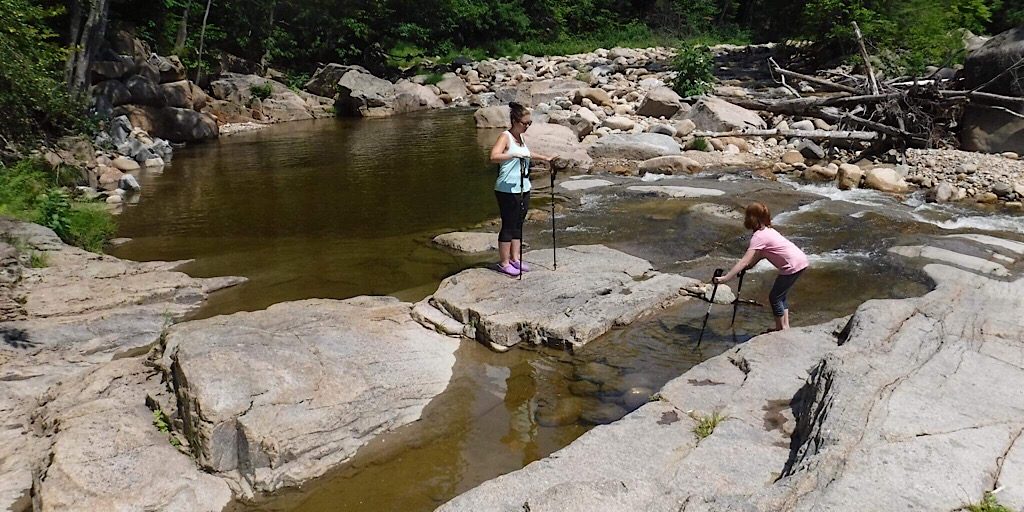 Pole vaulting techniques work. She was able to clear a four foot span with ease. 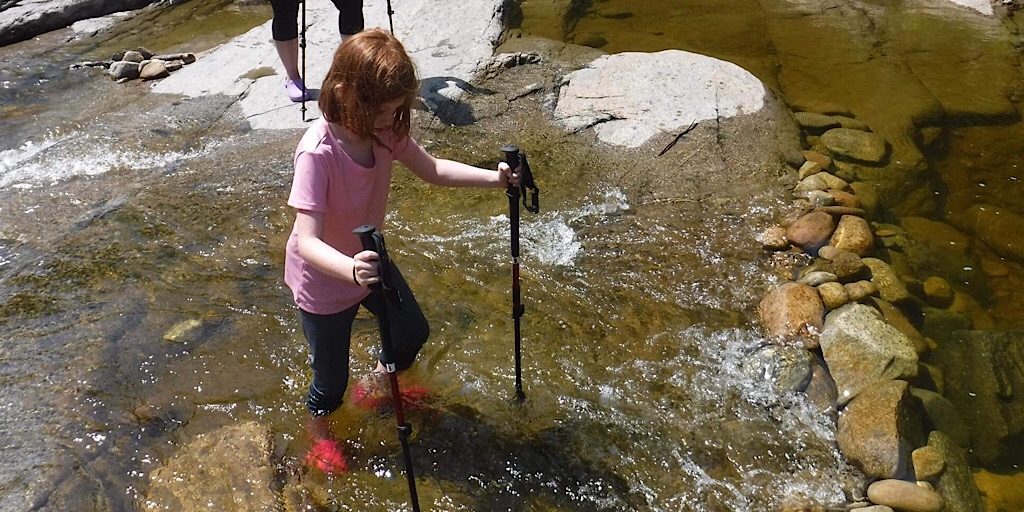 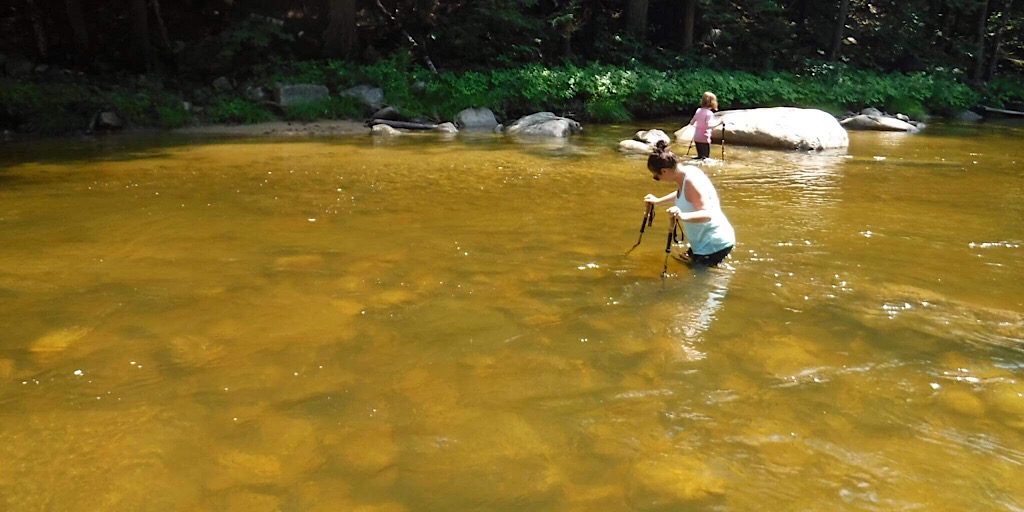 The deepest water of the day was manageable because it was slow moving enough to allow safe transit. 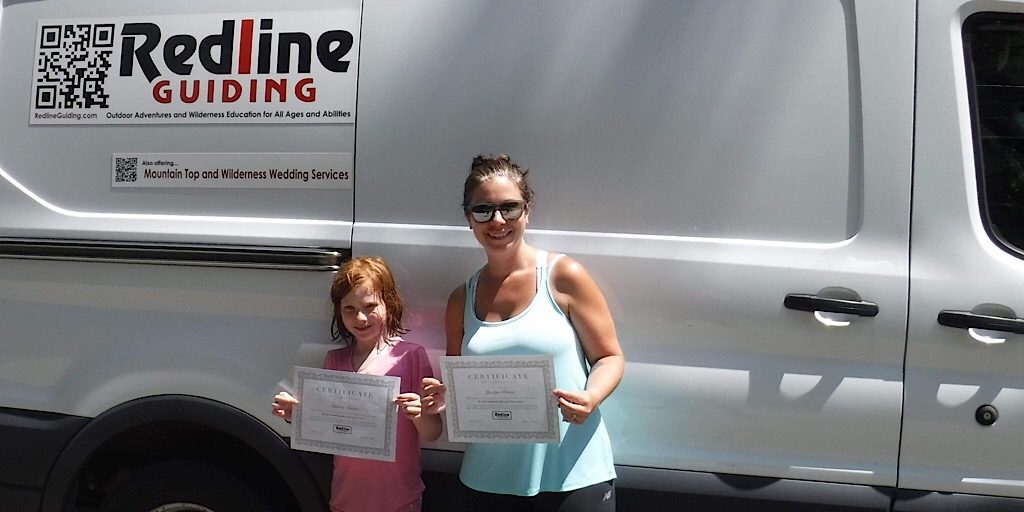 What a fun and rewarding way to spend the morning. Congratulations graduates!

It appears in the photos that they had a good time and learned a lot. In support of this appearance, Jocelyn, in fact, gave us a smashing five-star rating and review on Facebook that we want to share here.

My daughter (8) and I just got back from a river crossing course with Mike and I can’t say enough about it. He was informative, encouraging, has a great sense of humor, and is a wealth of knowledge on all things outdoors. He also addressed my daughter in the same manner he’d have addressed any adult, making her feel important and his equal, rather than like a child. Our crossing skills will need to be practiced over the years, but I feel with the information he armed us with today (and the physical practice), we are well equipped to handle whatever is thrown at us (and know when we should walk away). THANK YOU, Mike – we will be back! —Jocelyn

Thank you, Jocelyn and Addisen. You guys did very well in our class. Congratulations!