A father and son from London, England, wanted a wilderness backpacking experience and one as true to the real thing as possible here in New Hampshire. While wilderness tentsites were okay, we opted to avoid platforms and shelters to help deliver the experience they requested. After some discussion, we decided to take them to the Wild River Wilderness. Its qualities are a wilder wilderness with fewer people — three spotted in a four day span — covering a lot of acreage that’s more difficult to get to than some of our other five wilderness areas. Sounds perfect, right? That’s how Redline Guide Ken Hodges felt about it. His extensive backpacking and camping experience made him ideal as this mission’s leader.

Day One: Establishing Camp One at Perkin’s Notch

We met our guests on day one at Ken’s place in Conway with the van full of gear, Ready Packs, food, and more. We figured they would have to make one last run to the store, but we had things pretty dialed in so they needed to purchase very little. Just a couple clothing articles, headnets, bug spray, etc. We also suggested a deck of cards as it was supposed to rain the first night and most of day two. The plan was to hike, but there could be some unwanted downtime. We wanted to avoid boredom. 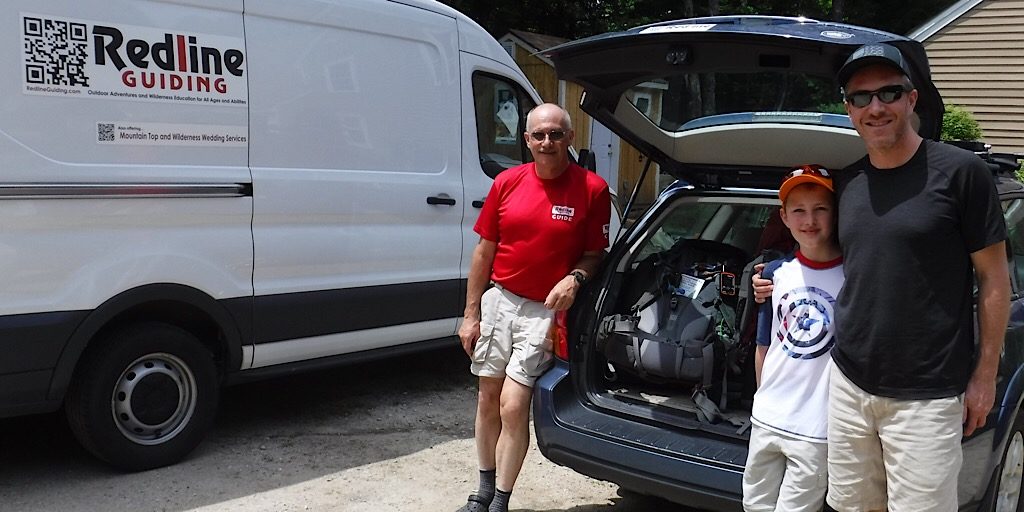 Ken looking snazzy in his guide shirt, and Fred and Felix were ready to roll.

The father-son team, father Fred and son Felix, were feeling optimistic, fortunately. And we weren’t too worried. We knew the rain was coming and know how to deal with it. But before we get into that, let’s start at the beginning of that afternoon when Ken, Fred, and Felix made their way along Bog Brook Trail and arrived at the Perkin’s Notch Tentsite a few hours later. It was hot, they were tired, but happy to be “home.” 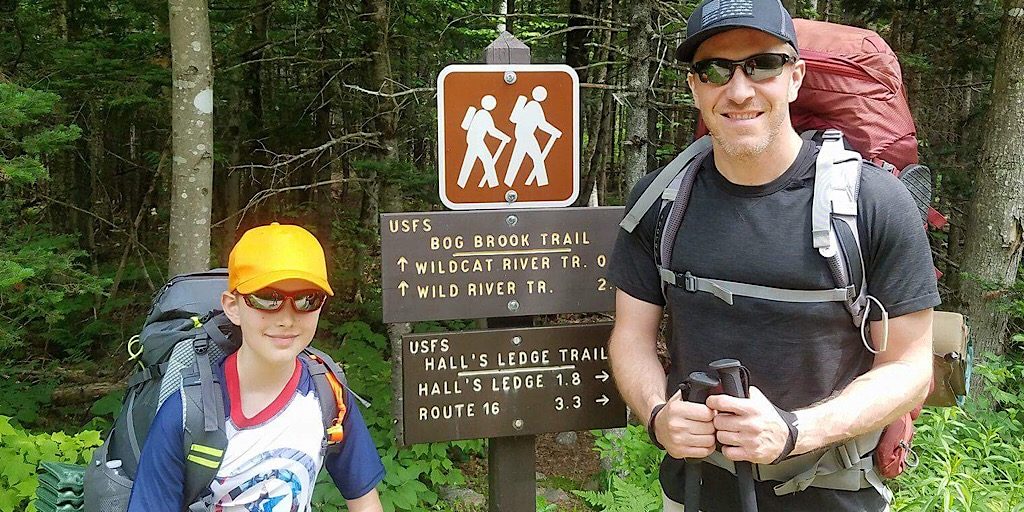 Father and son, all clean and fresh at the trailhead.

Upon arrival they established themselves at the tentsite, covering camp craft basics such as the hiker’s triangle (though we prefer to say square because a guy’s got to go, right?), the hanging of the bear bag, and some important LNT-related matters. They also wanted to put up some tarps to create a dry communal space for gathering outside the tents. A cooking space also needed to be created. After making themselves as ready as possible, and fed (though Felix went right to bed), they were ready for a good night’s sleep. 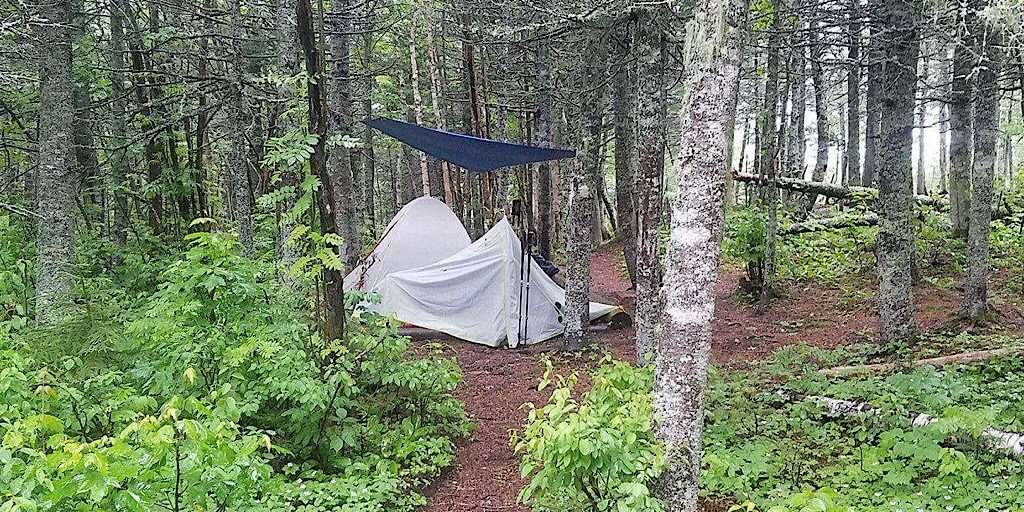 Just after dark the rains came but everyone was snug in their tents, one for Fred and Felix, and Ken in the guide’s tent. The sounds lulled Ken to sleep, but offered mixed results for the father-son duo. They were, however, secure in knowing they were prepared for what was coming, and knowing it was going to make the difference in whether everyone was happy or sad. At Redline Guiding we really aim for happy. 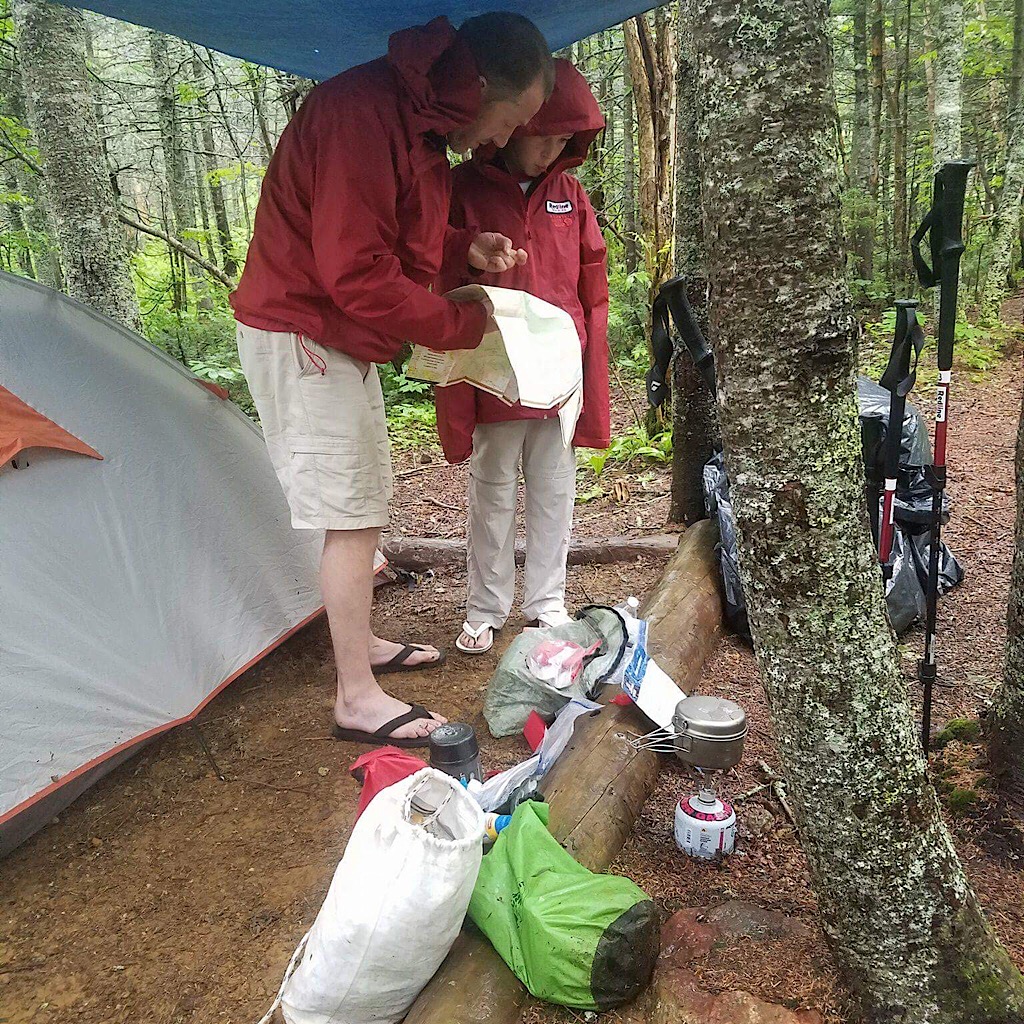 Day Two: Moving to Camp Two in the Rain

As forecast the rains continued throughout the night, into the morning (and throughout the day well into the evening of day two as well). Everyone donned their rain gear in the morning — we provided hardshells and ponchos, in addition to a host of gear protection measures — and after a serious discussion they decided to break camp and move along to the Spruce Brook Tentsite. Then, as it turned out, upon their arrival they felt energized enough to continue on to the Blue Brook Shelter (which actually has no shelter… as we knew). It was there they spent night two. 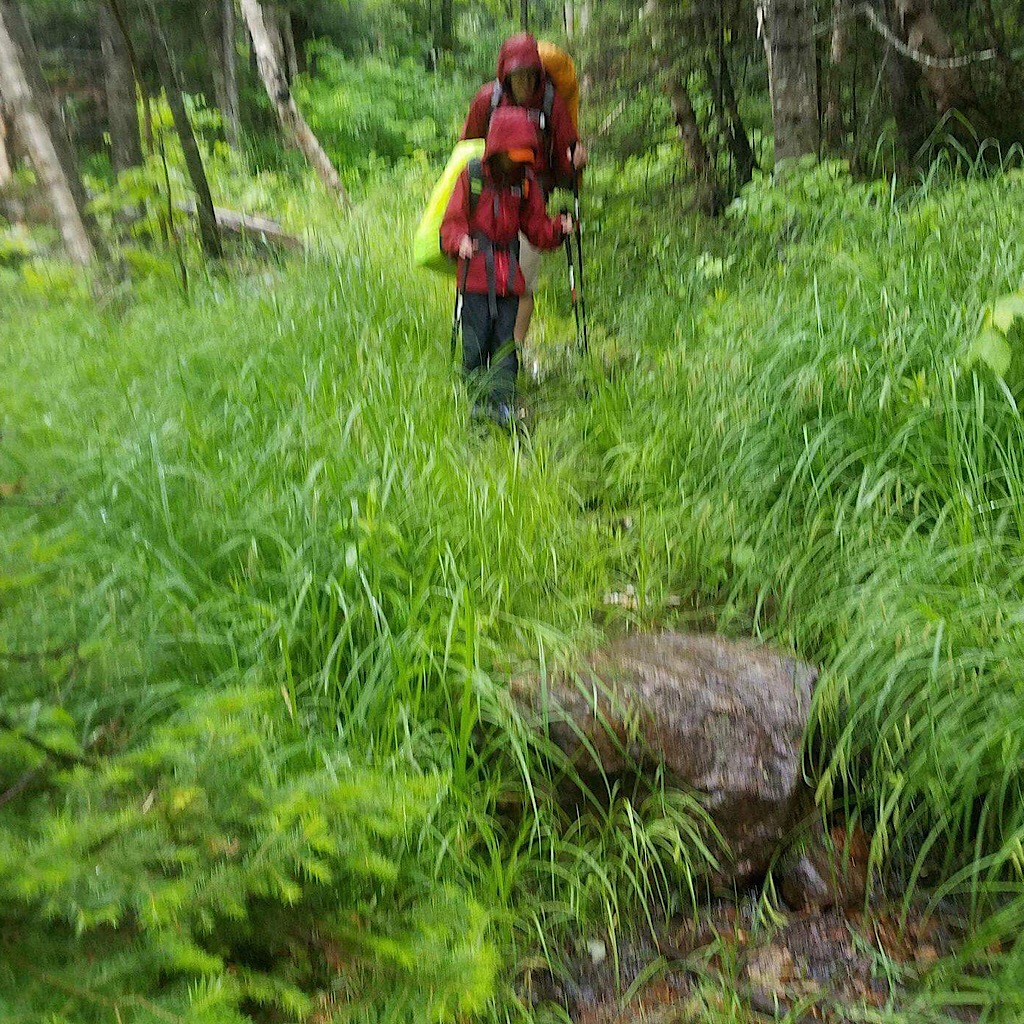 On the move they fight their way through the steamy jungle. 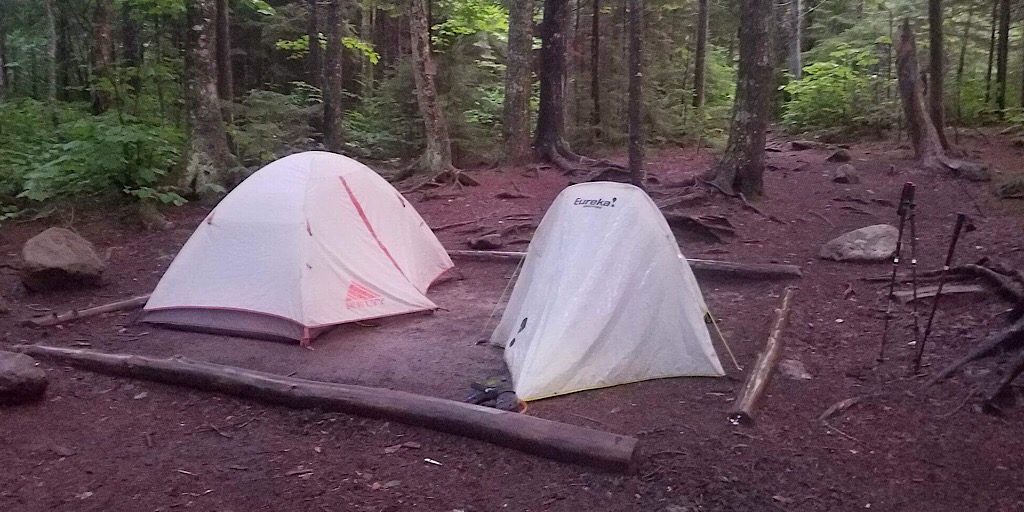 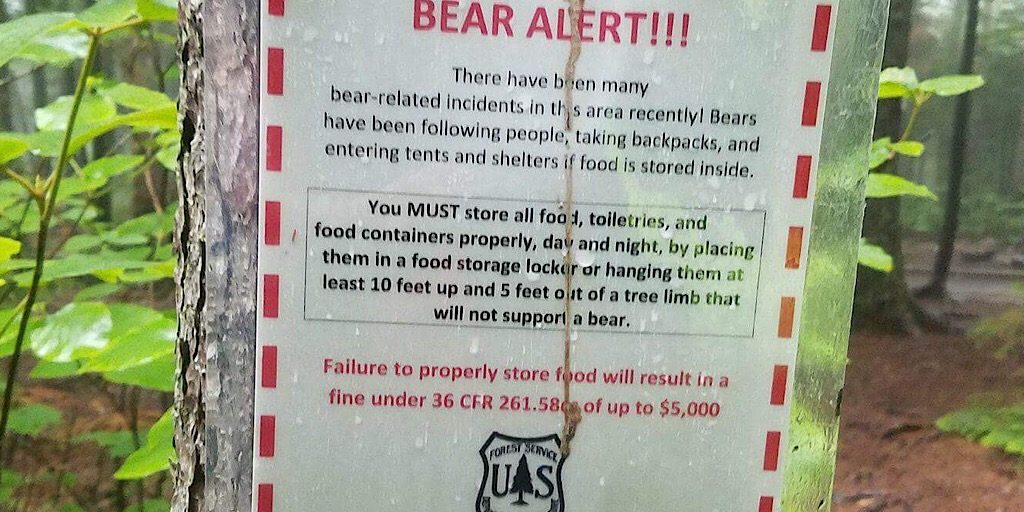 Oh, no, there are bears out there! 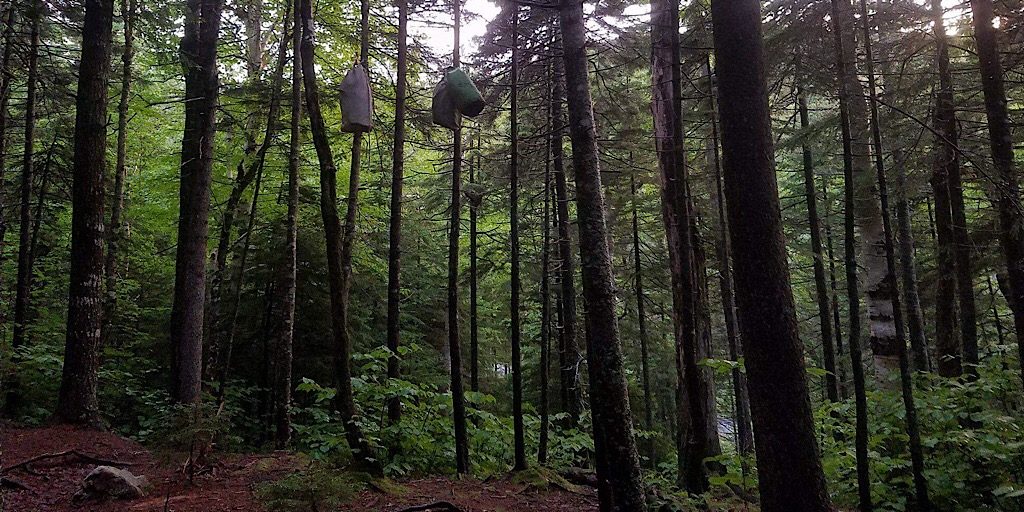 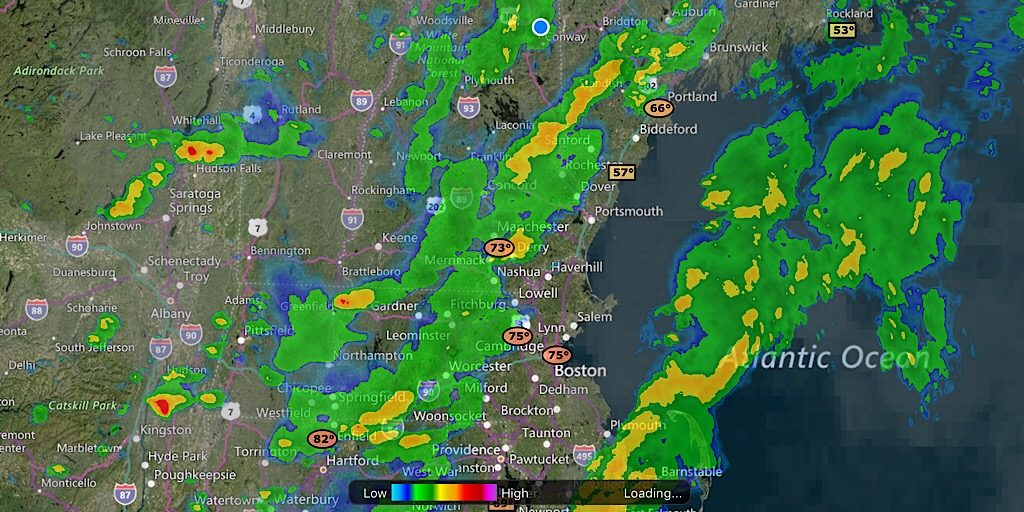 At 5:30 PM on day two the rains were still coming and would be for a bit. Day three, however, would be better. Much better.

The leg from Spruce Brook to Blue Brook was a tough one and it took some time, but the rewards found on the stream of the Blue Brook Shelter site made it all worth while. Fred and Felix enjoyed playing on the ledges and being cooled by the refreshing cascades. What a fine place it is. 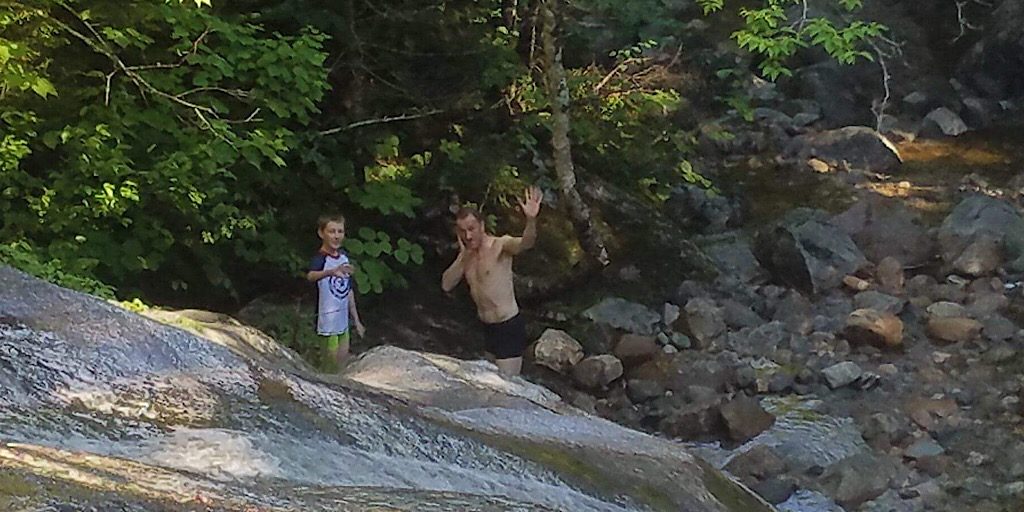 Slowly the weather began to settle and on the third day they awoke to some welcome sunshine. After all that time hiking in the rain and moving camp and all, they needed to spend some time drying stuff out. Before long, though, they were packed and loaded and on the trail again climbing upward. 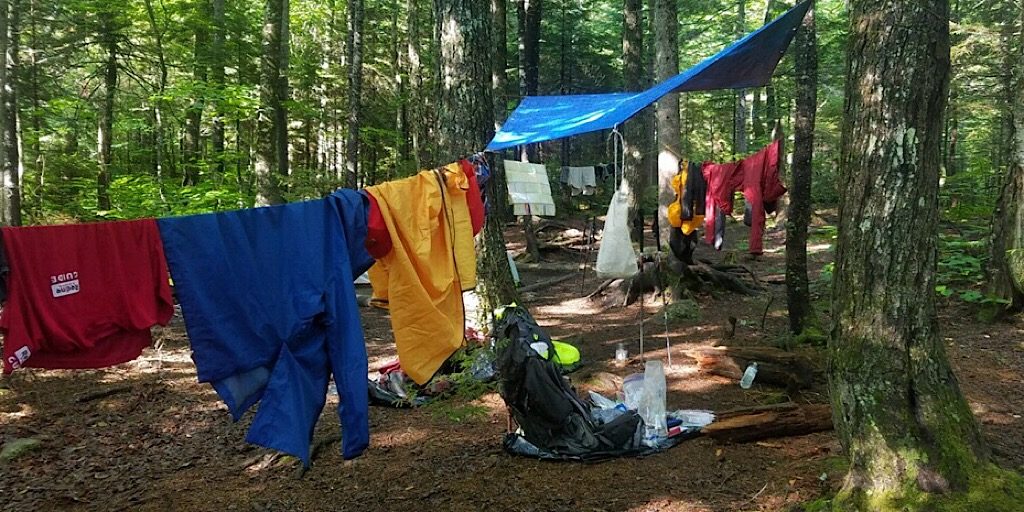 These were drying times.

Renewed by the fine weather Ken and our two guests hiked to the top of the ridge and found the summit of Mt Meader and enjoyed its stunning views of the Baldfaces and their surrounds. Our guests were floored by the grandeur. They ate and rested as they slowly traversed the ridge westward making the most of the experience. Ken began to feel some concern over stormy weather forming over Mt Washington, however, so he tried to keep things moving along. That said, they did visit Eagle Crag before dropping down the reportedly now-overgrown but still pretty Eagle Link Trail and the safety it offered. 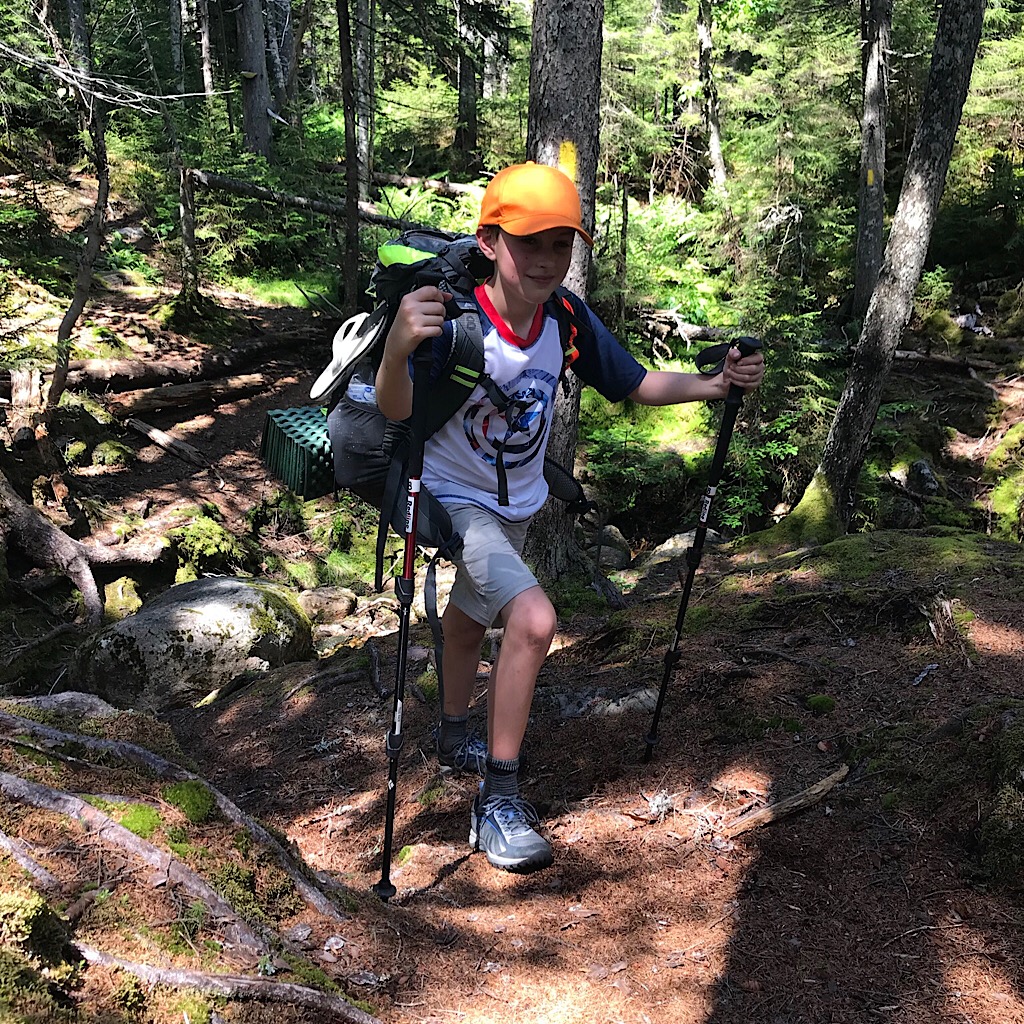 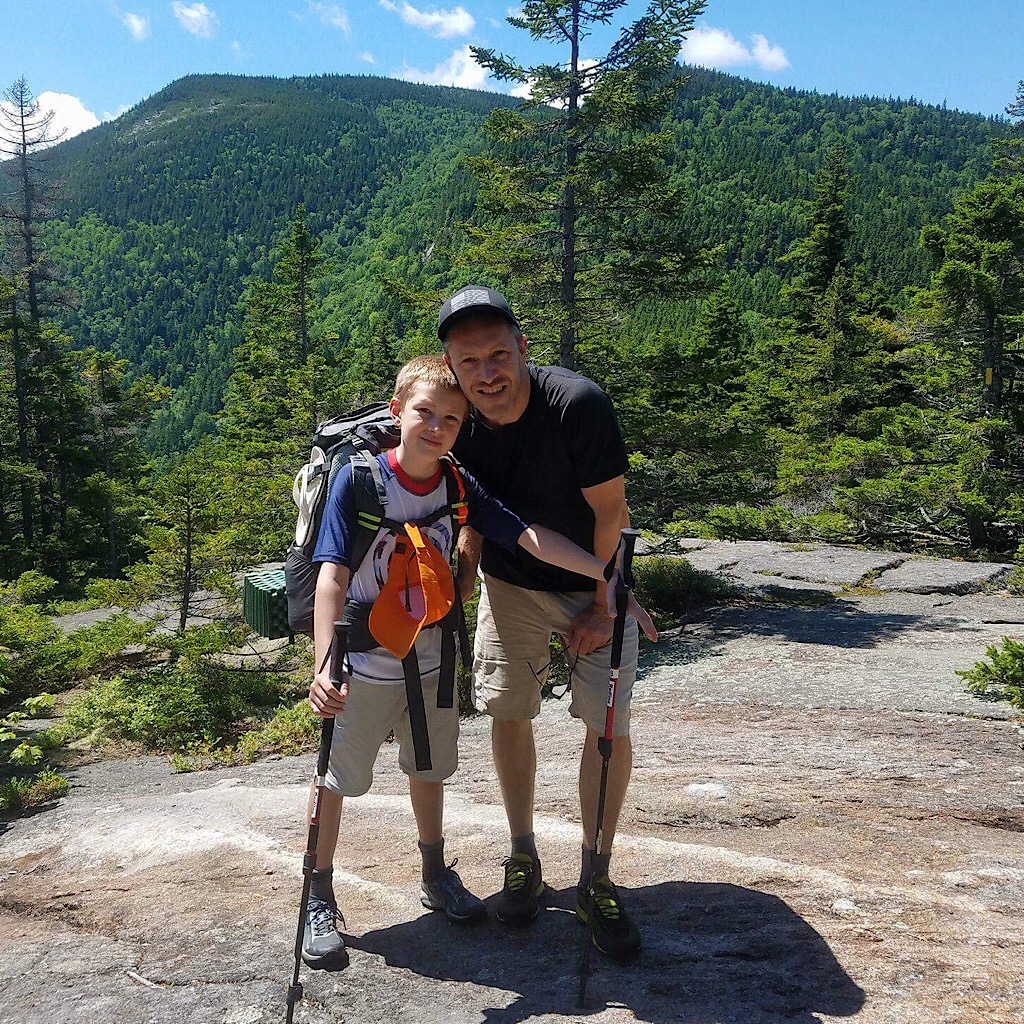 Ridgeline acquired. Wow, this is beautiful! 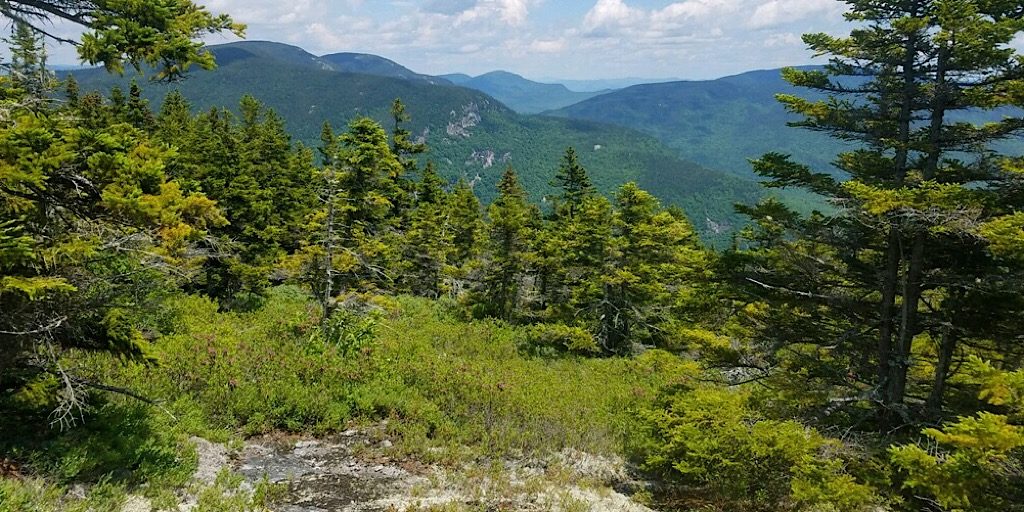 This is a special area, one that is less visited than many other locations. 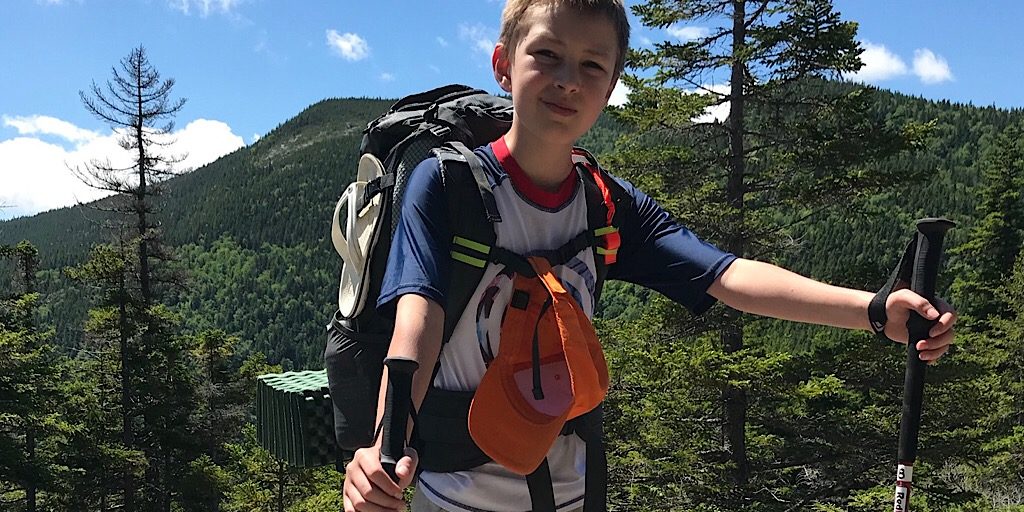 Felix should feel proud. He has done a lot in a short time. 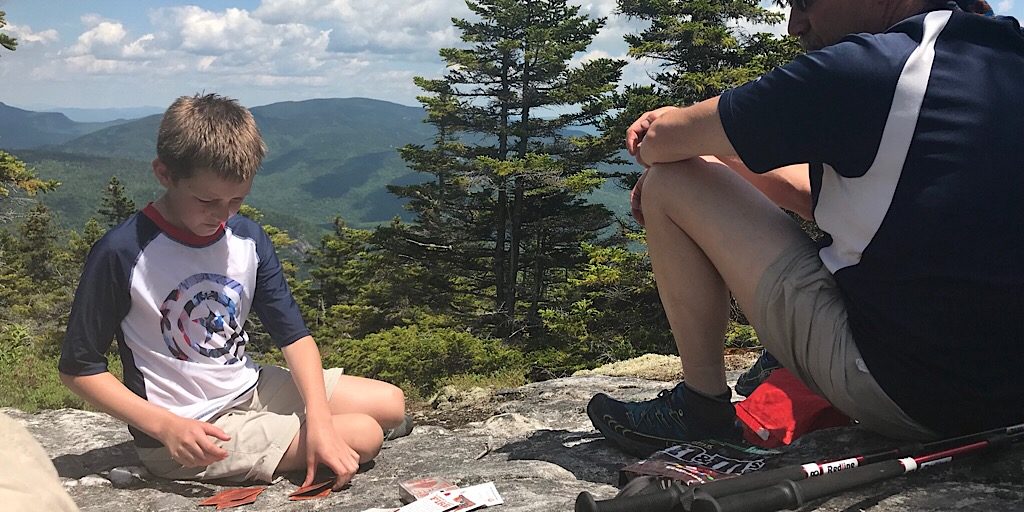 Ken looks on during a break while Felix, an amateur magician, shows him a card trick. Photo by Fred.

It took some time to make their way down Eagle Link Trail but they eventually made it back to the Wild River Trail where they continued westerly. They were headed back toward Perkin’s Notch but along the way they located a probable US Forest Service trailbuilders’ “spike camp.” They decided to stay there since it was unoccupied. The site was legal in relation to the trail, but maybe less so in its relation to the nearest water. They deemed it worthy anyway since it was so well impacted. 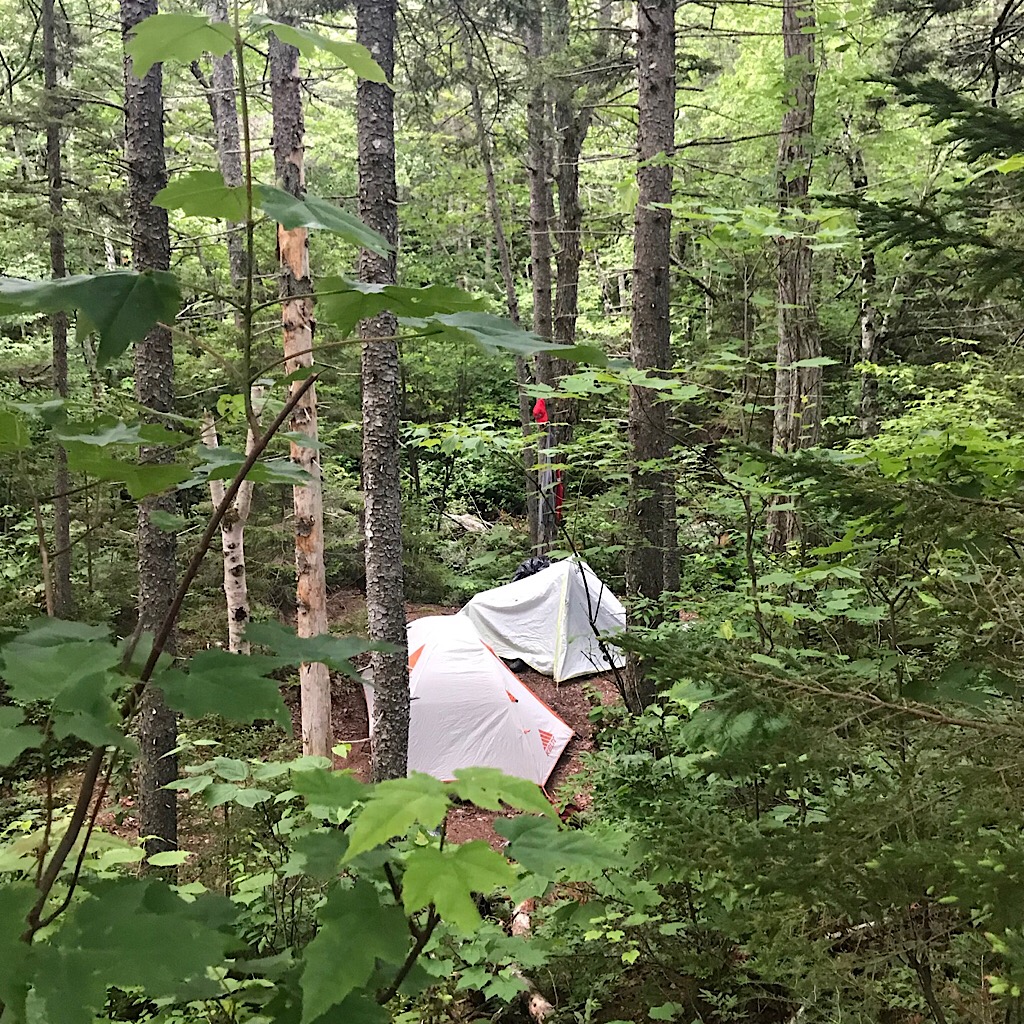 This probable USFS spike camp was the location of their final night. Wild. Photo by Fred. 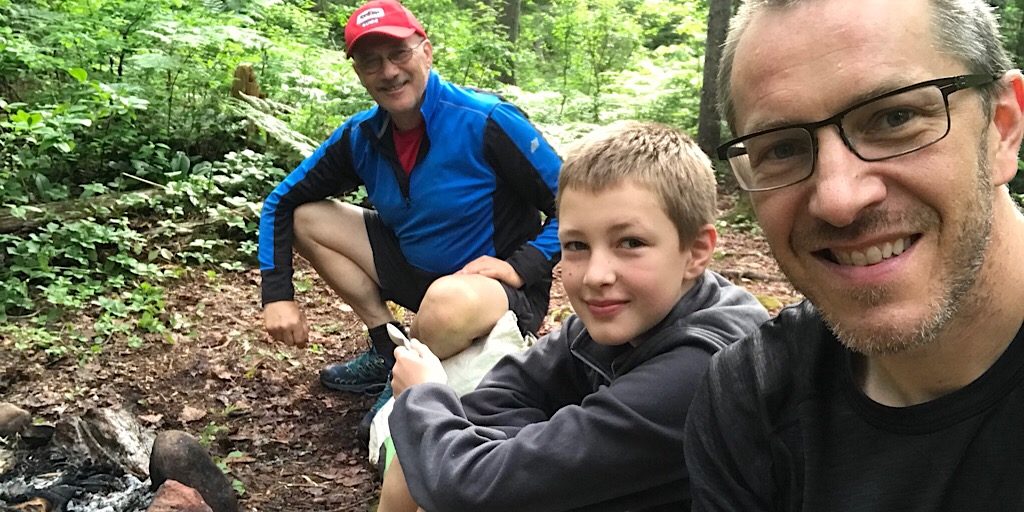 A little more rain wet their day, but the smiles persisted. Tomorrow they would head home.

All the rain conspired to made the exit a tad wetter than their entry, but the team felt good. Felix full of vigor, Fred and Ken let him lead the way. They made their way back out of the now-boggier-than-ever Bog Brook Trail. 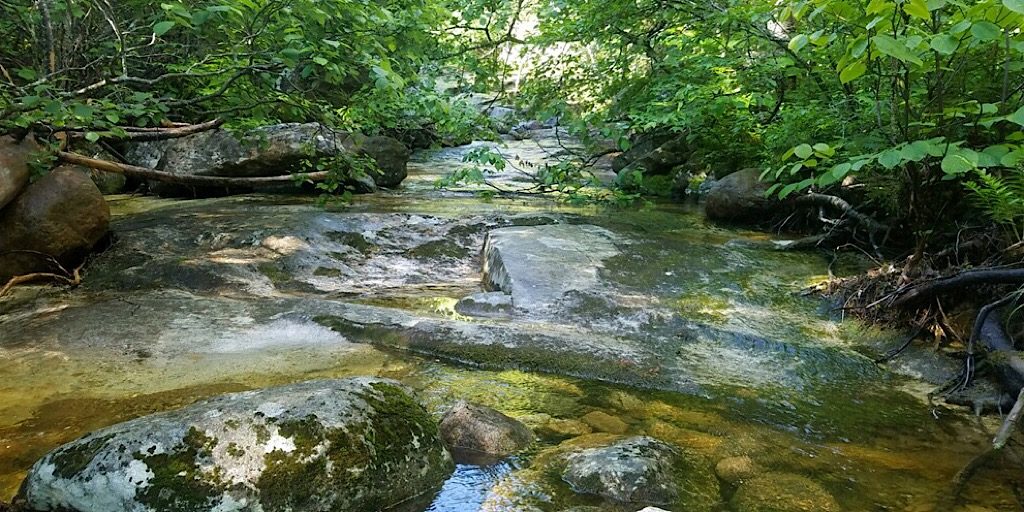 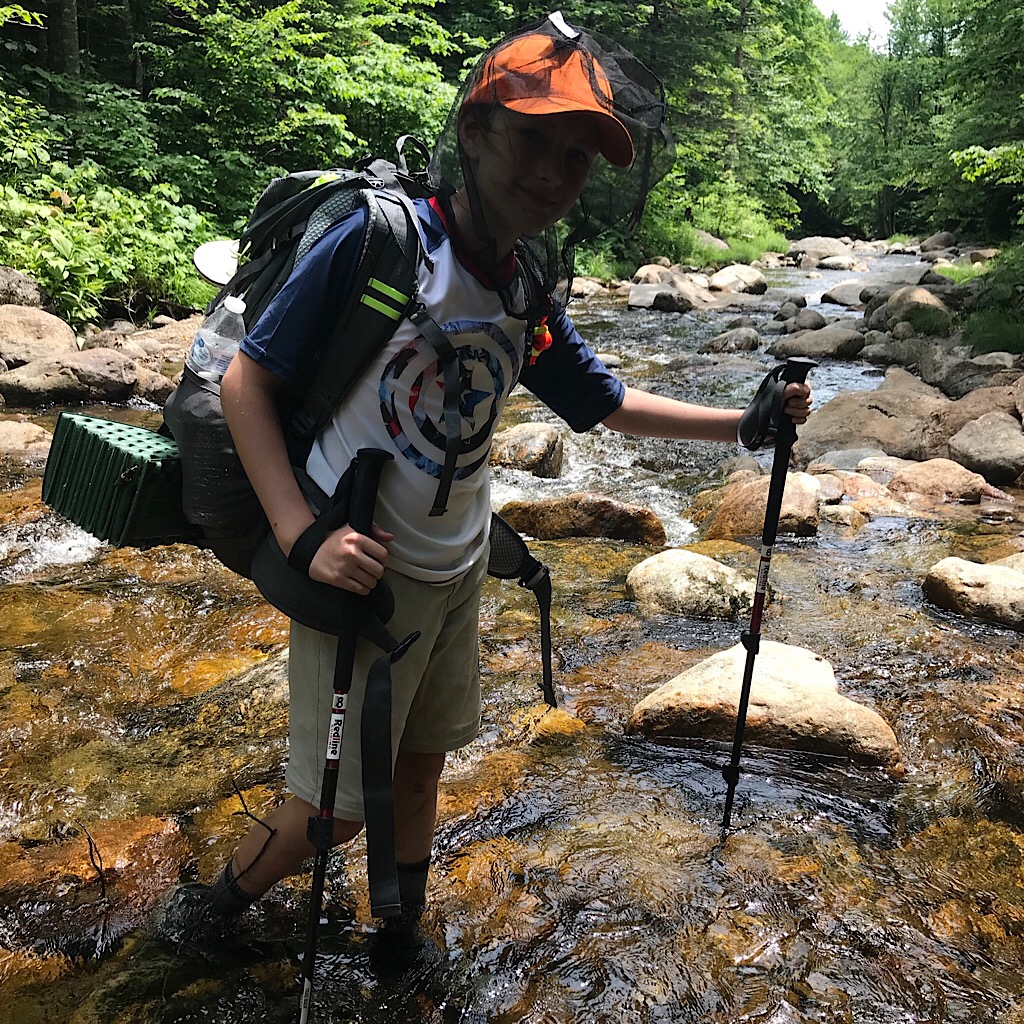 Protected. Deer flies showed up on the last day. Photo by Fred. 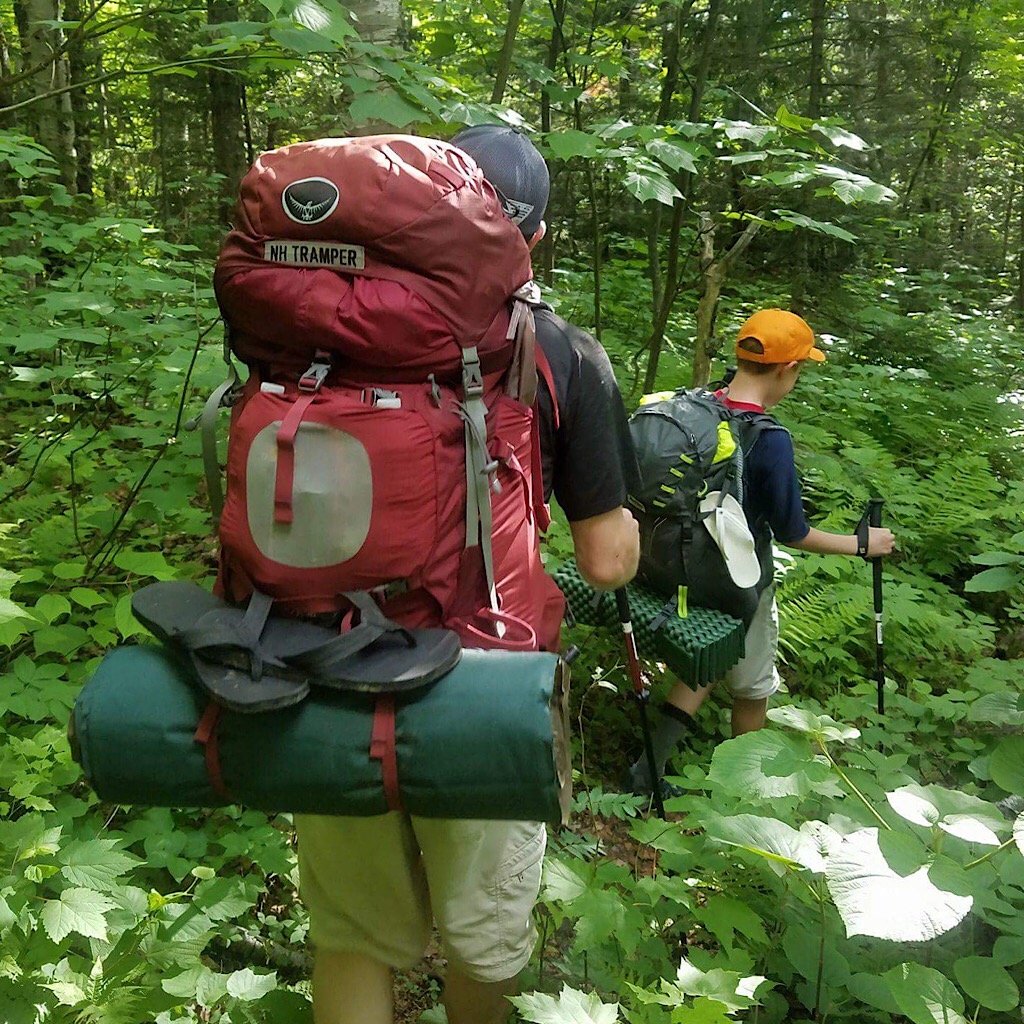 They make their way out. 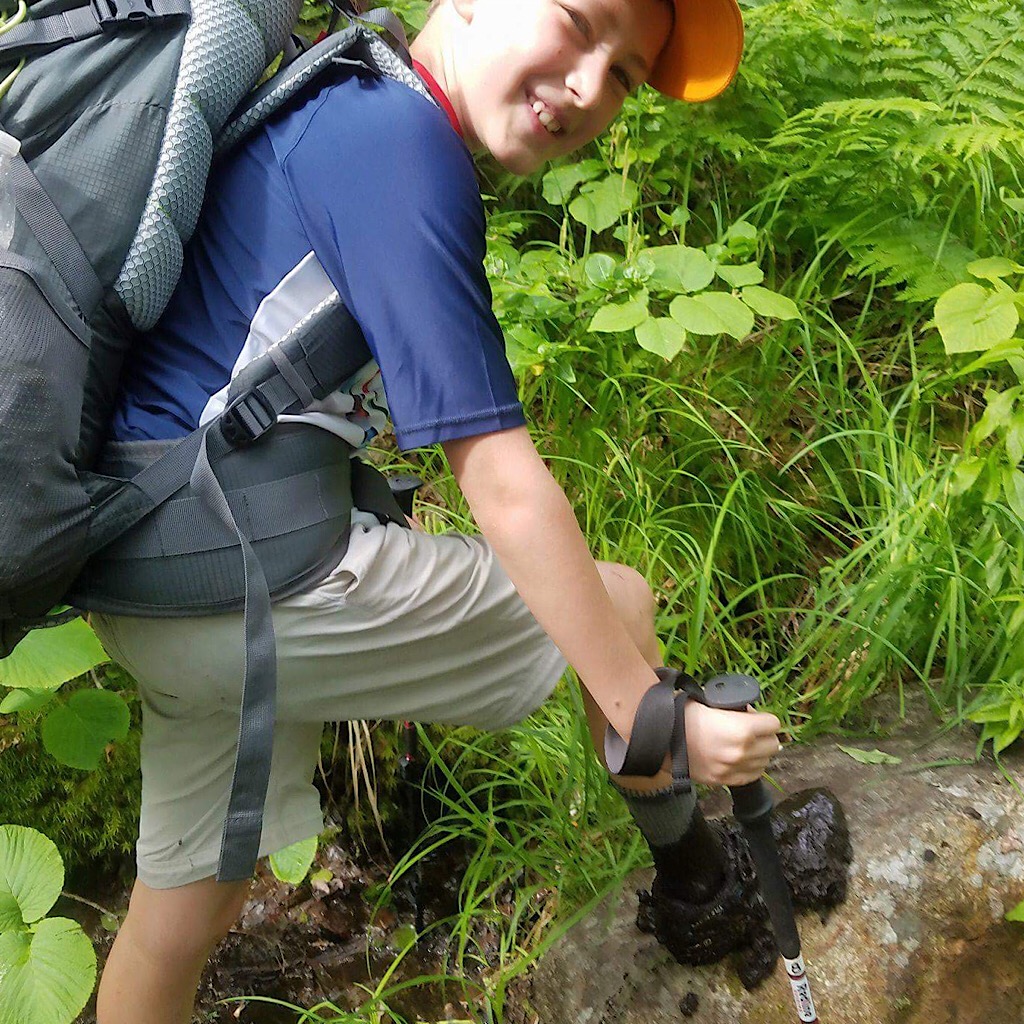 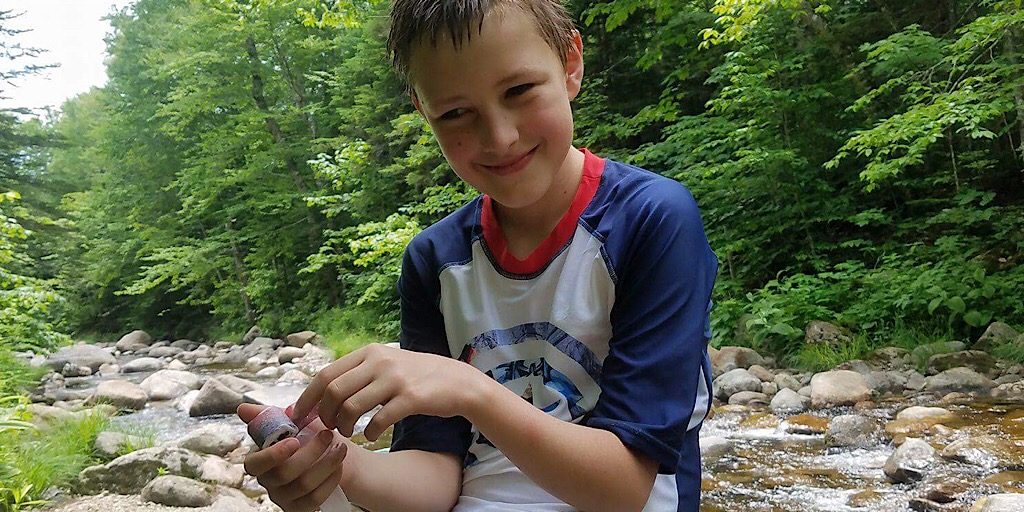 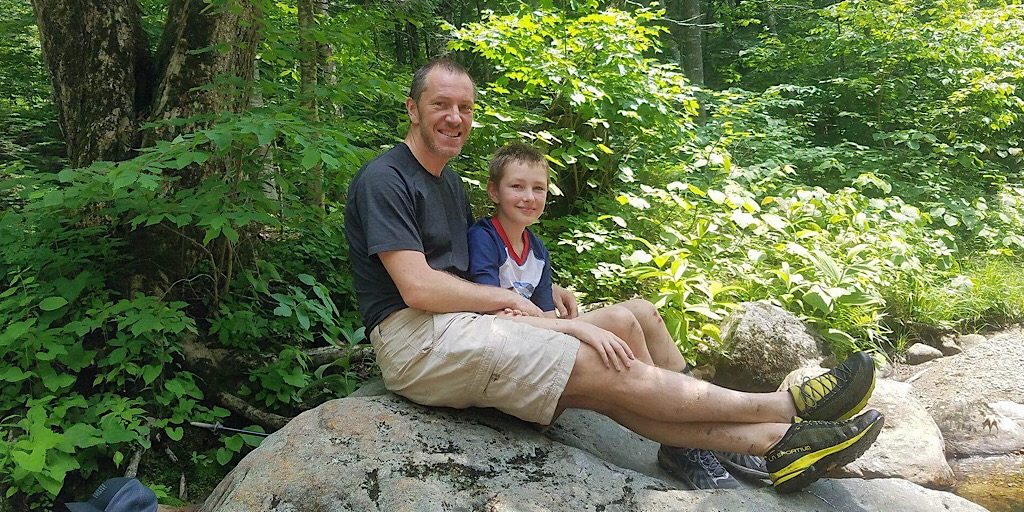 The exit was hot, buggy, and muddy… and fun. Here Fred and Felix take a short break.

Once out they swung by Mike’s place to drop off the gear — which despite it all was really quite dry and obviously quite lovingly cared for during the trip. Thank you very much! 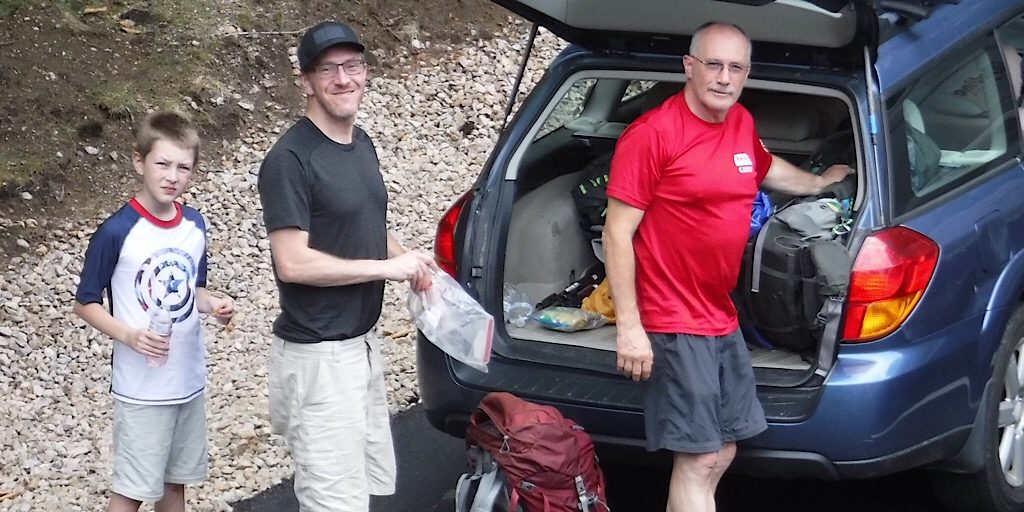 Congratulations to Fred and Felix. We hope you loved our wilderness. And Ken, terrific job leading this backpack.