To those in the know, four days of back-to-back hiking here in our rugged New Hampshire mountains is not something to be overlooked. When it’s done by a guest from Florida who despite having the best in mountainesque gadgetry is unable to actually get out there to hike mountains, it’s even more impressive. And that’s exactly what our Floridian visitor did over the long weekend. And this she did with the help of Redline Guide Arlette Laan.

Day one was originally going to be a warm up. To ease in. Willard was in consideration. But then things changed, they were feeling it, and the goal expanded. Nothing outrageous, mind you. It was a fine choice. Our guest had a great time. The falls on Bemis Brook were stunning as was Arethusa Falls. They also enjoyed the views in their Loop hike. Here are some photos. 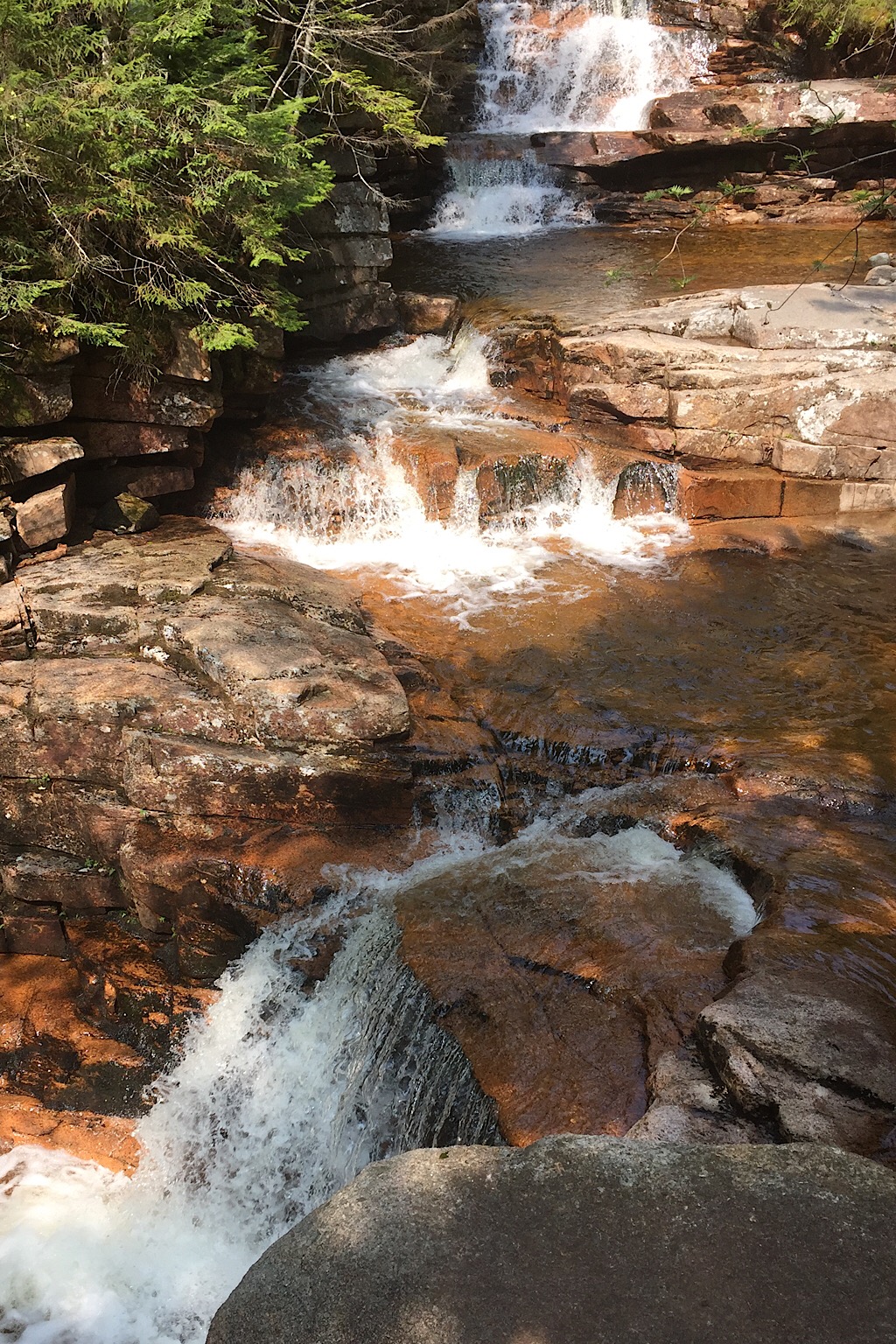 The lovely falls along Bemis Brook. 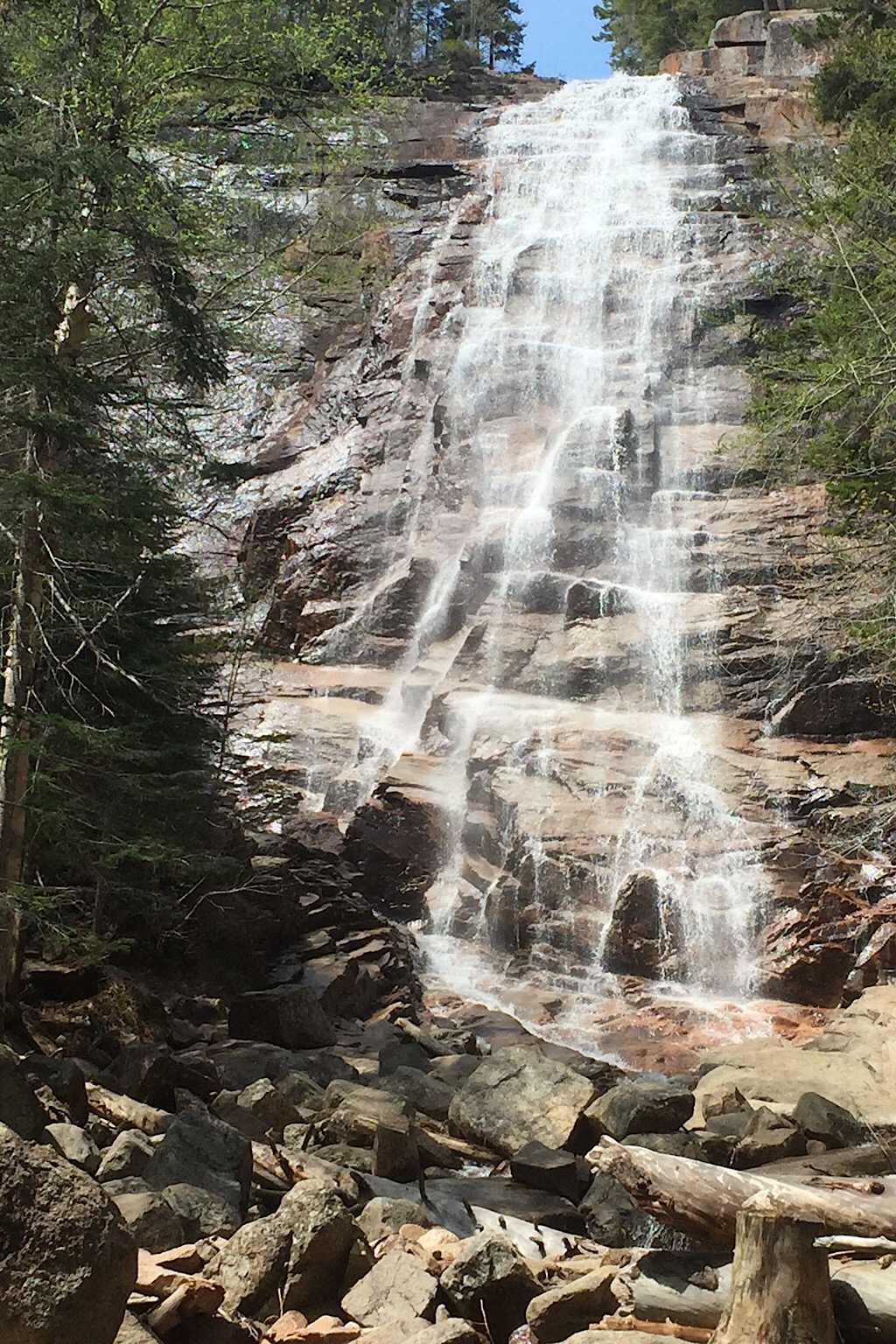 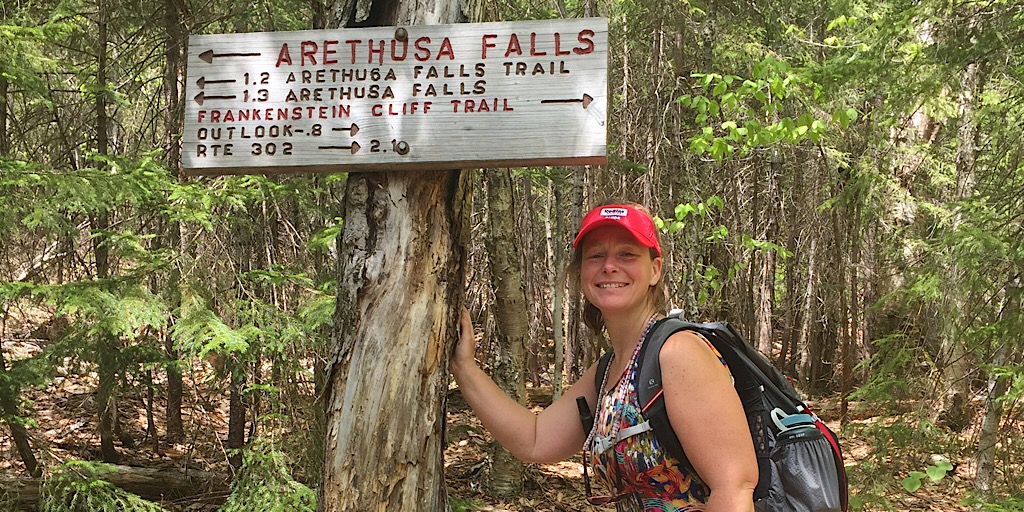 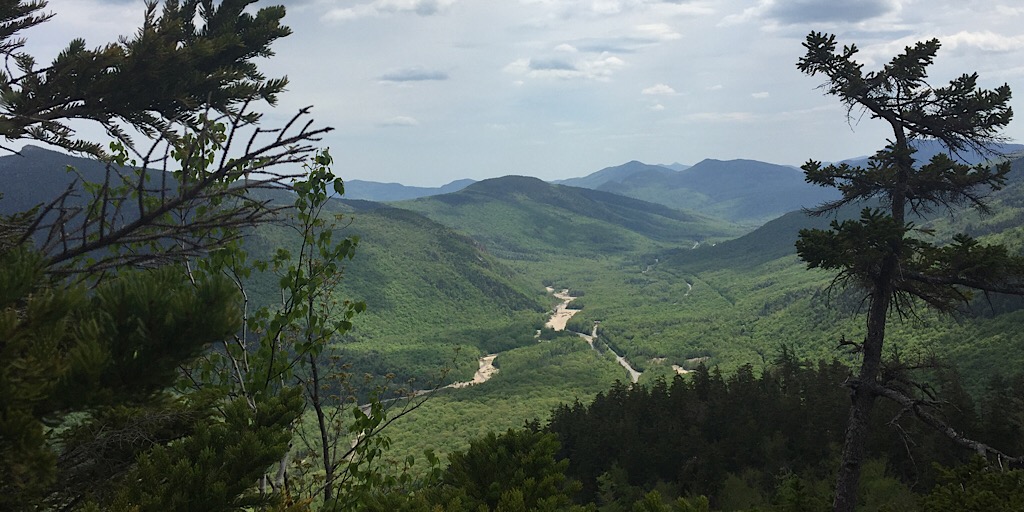 They did great, running strong all day long. Until the end of the day, that is. Our guest was ready for a reprieve by day’s end. A rest was needed. And it was certainly well-earned. Onto day two.

It was decided to make day two, which was slated for a half day hike, to stay at lower elevations both to avoid the heavy lifting and an uneasy forecast. Touring some of the falls accessed via Appalachia seemed like a good idea. 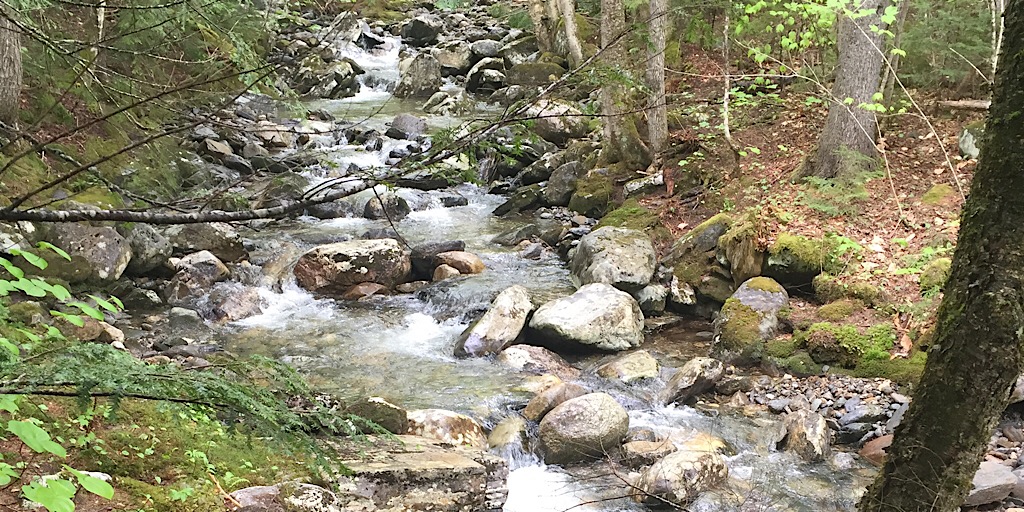 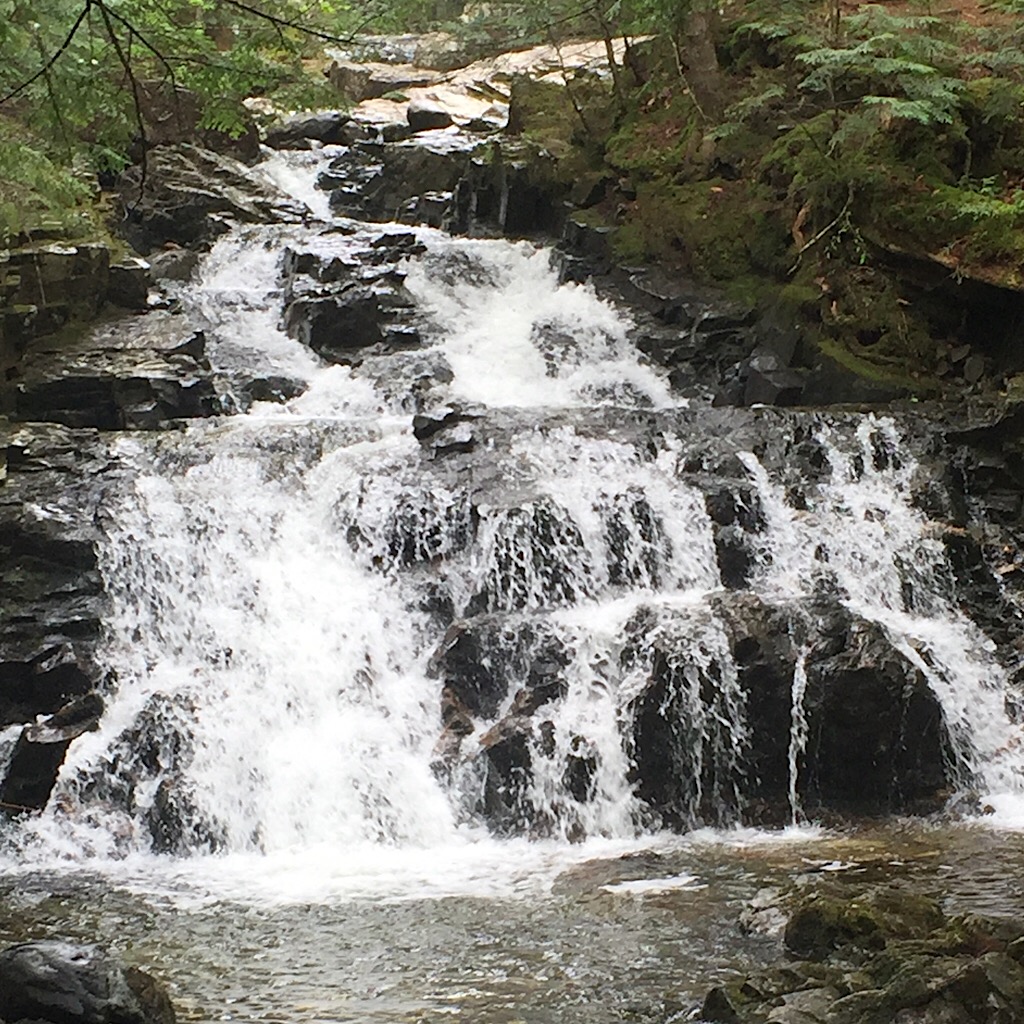 They marvel at Gordon Fall. 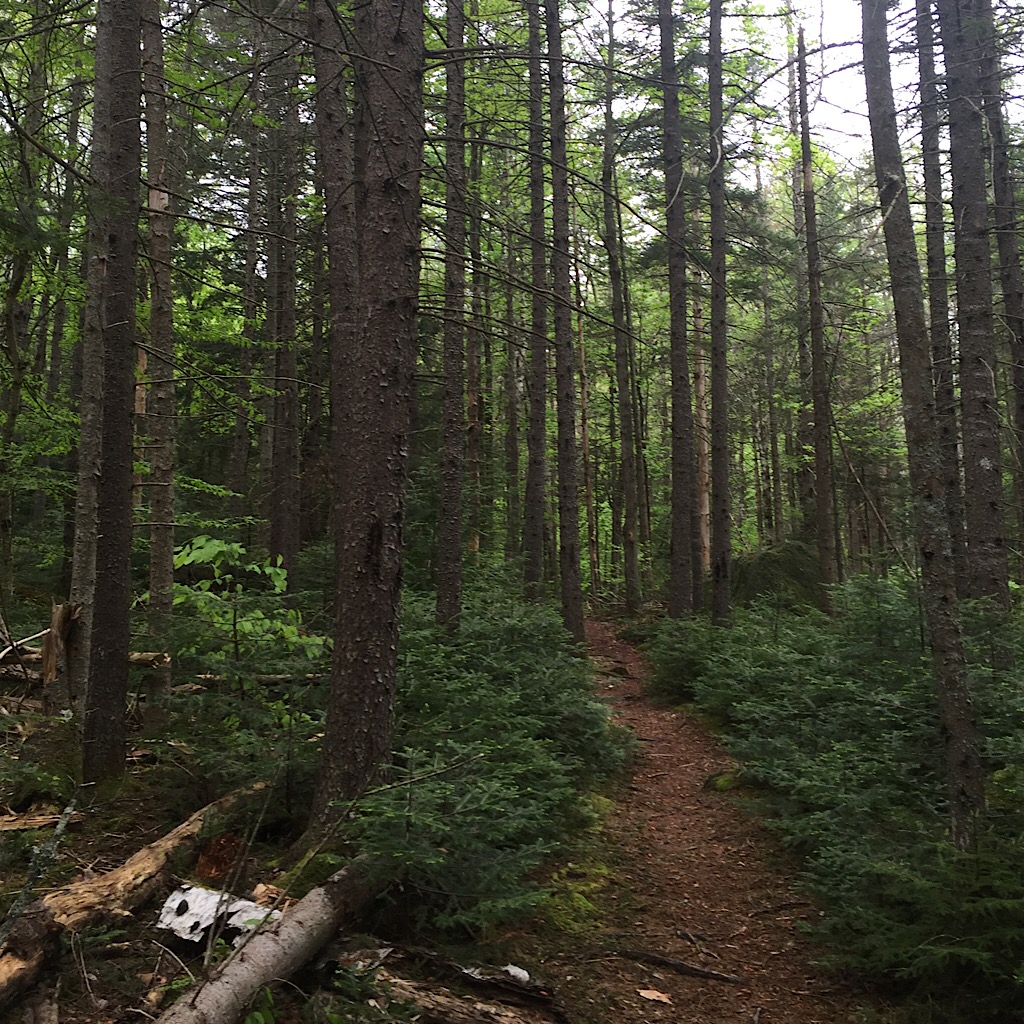 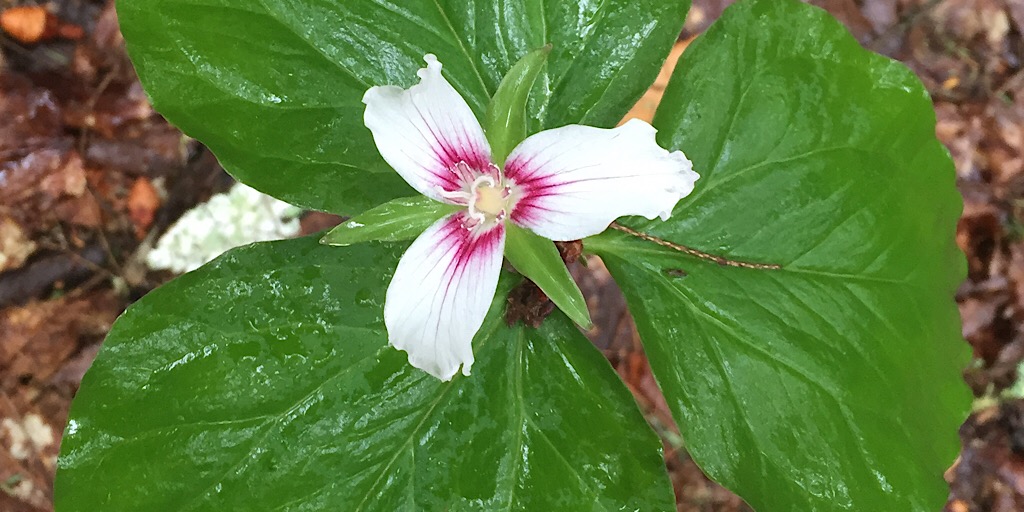 Painted trillium glossy from the rain. 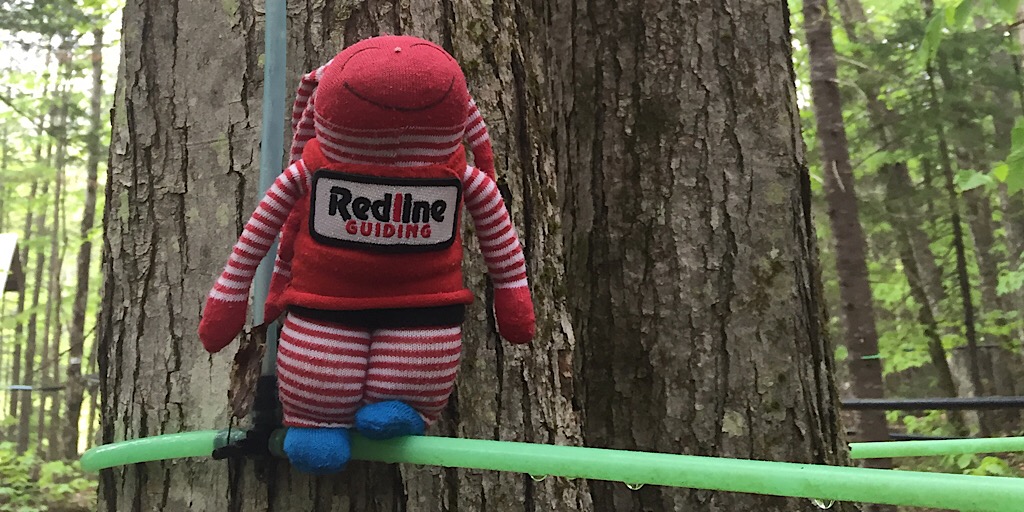 One of Arlette’s creations, “Red,” slacklines some maple sap tubing. 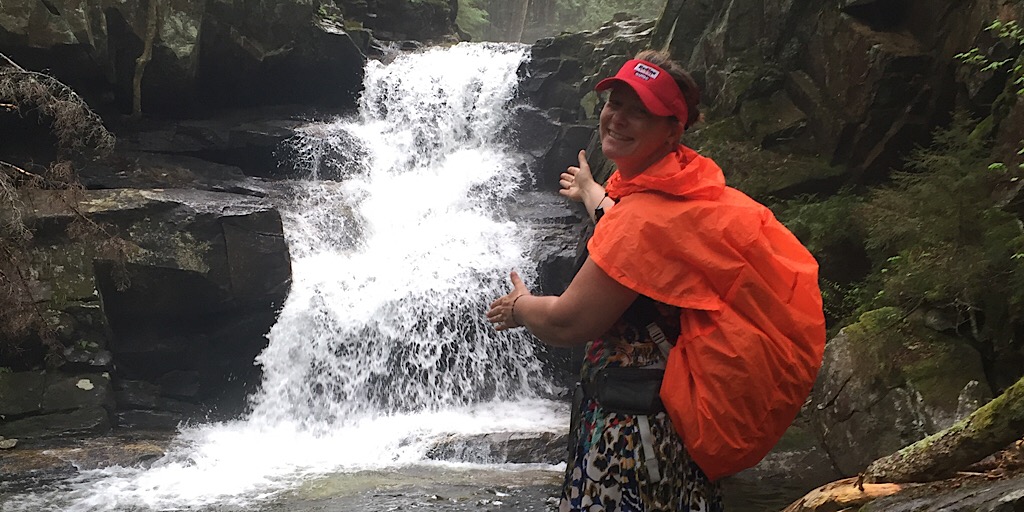 Arlette shows off Cold Brook Falls. Surely there’s something to that name.

All in all, despite some sprinkles, day two was a success. Onto day three.

Day three was cool and comfortable, and dry depending on where you were, but cloudy everywhere. For our duo, because a little bit of gain was wanted so Pine Mountain was slated for the day, but it decided to lead our guest up to Black Cap then across to Cranmore if they had the time during this half day tour. 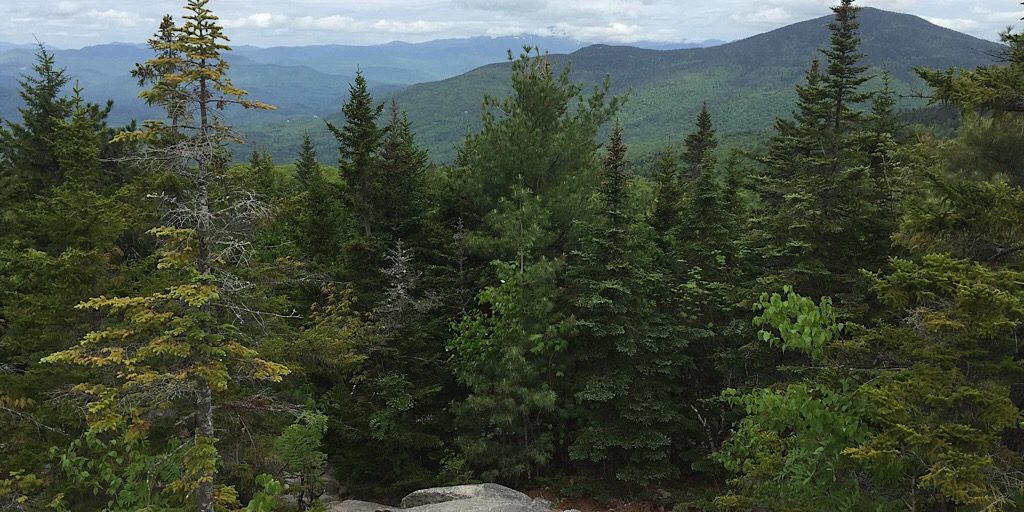 The view opens up as they approach Black Cap’s rocky summit. 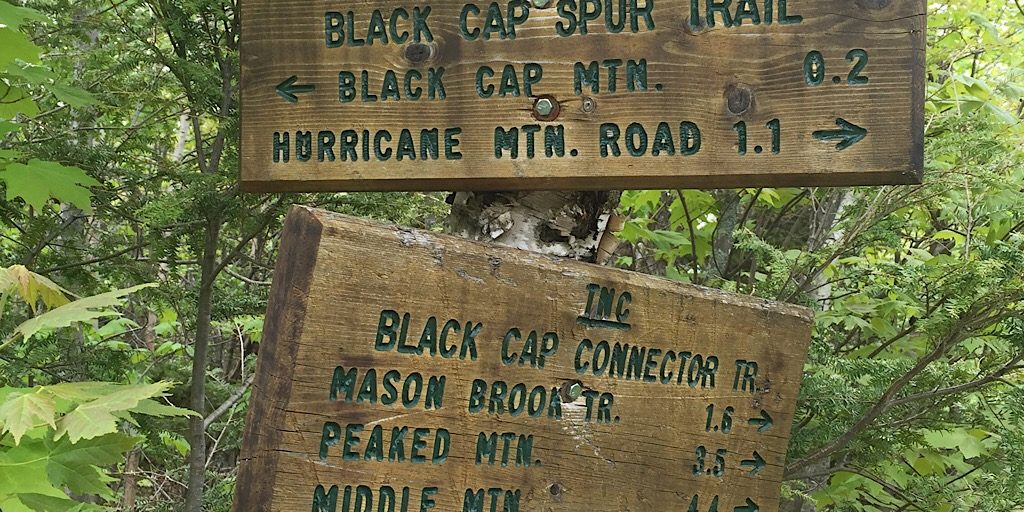 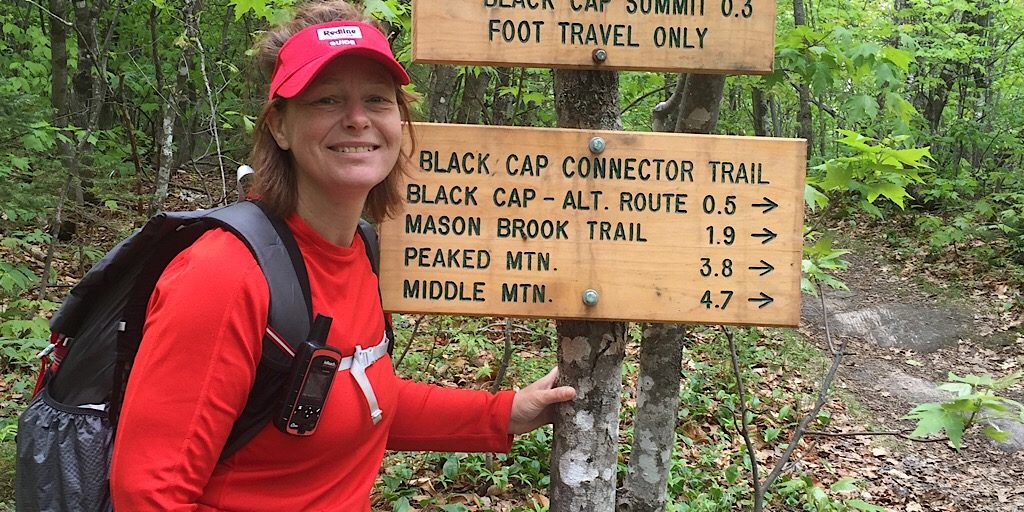 So many trails, so little time. 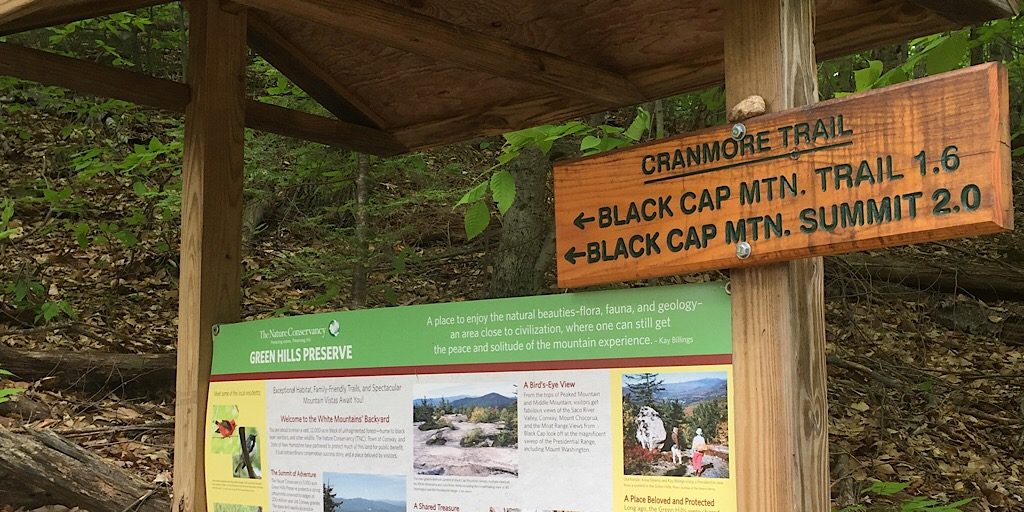 End of the line.

Onto day four and the final day of the trip.

Day four was cloudy and cool like the day before and something leisure was requested. There was also a time constraint for this final day so after considering several possible short hikes such Lost Pond Trail it was decided to take our guest on the Moat Mountain Trail to Diana’s Baths and beyond that point as time allowed. It was a safe choice. 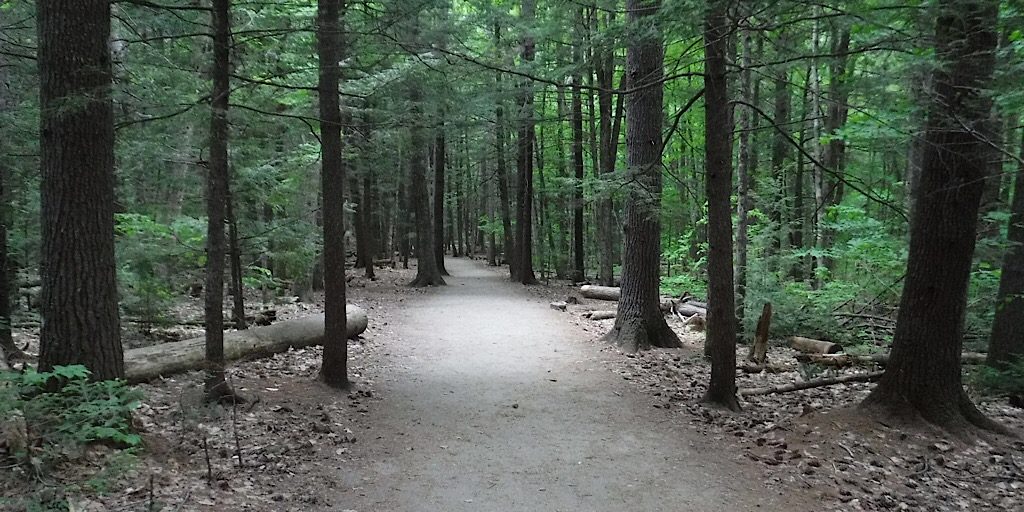 Tame walking path until the falls. 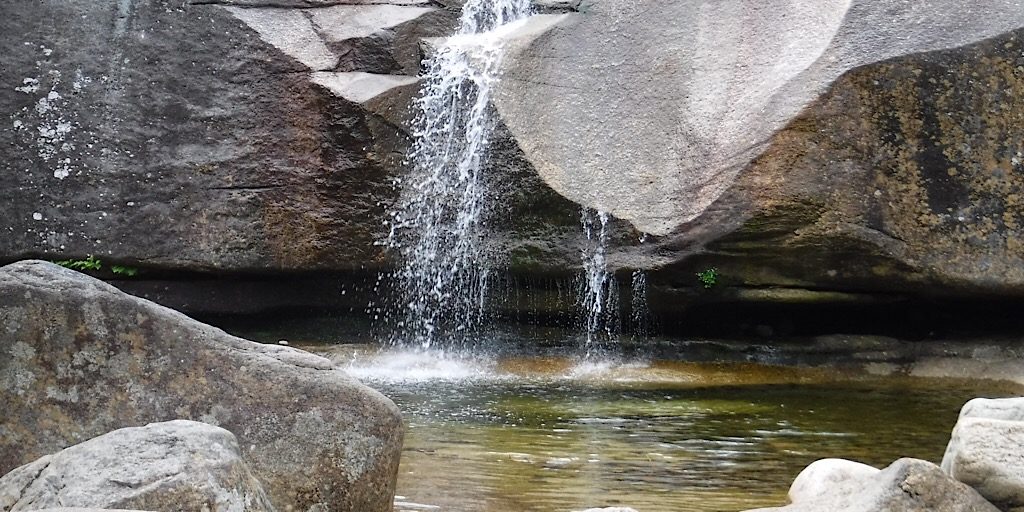 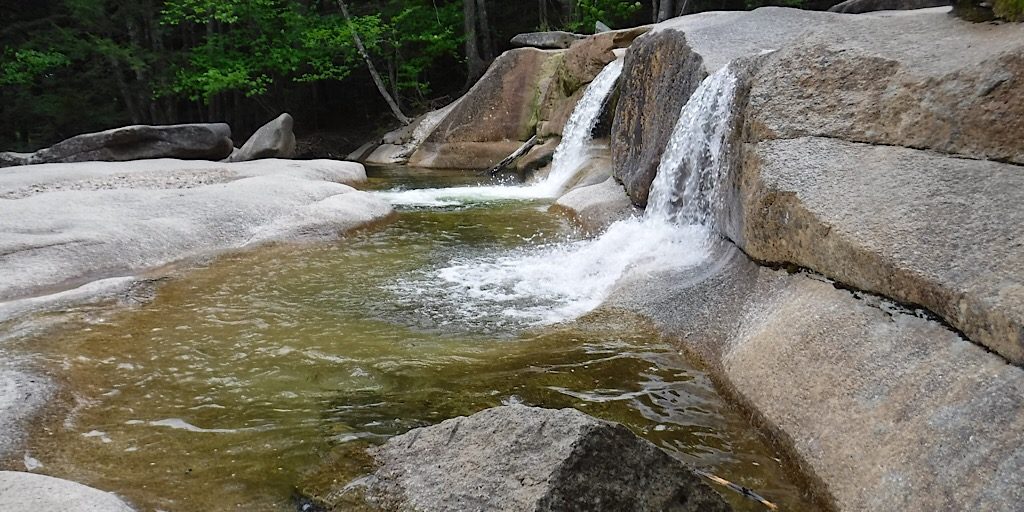 At certain times crowds here may be avoided. 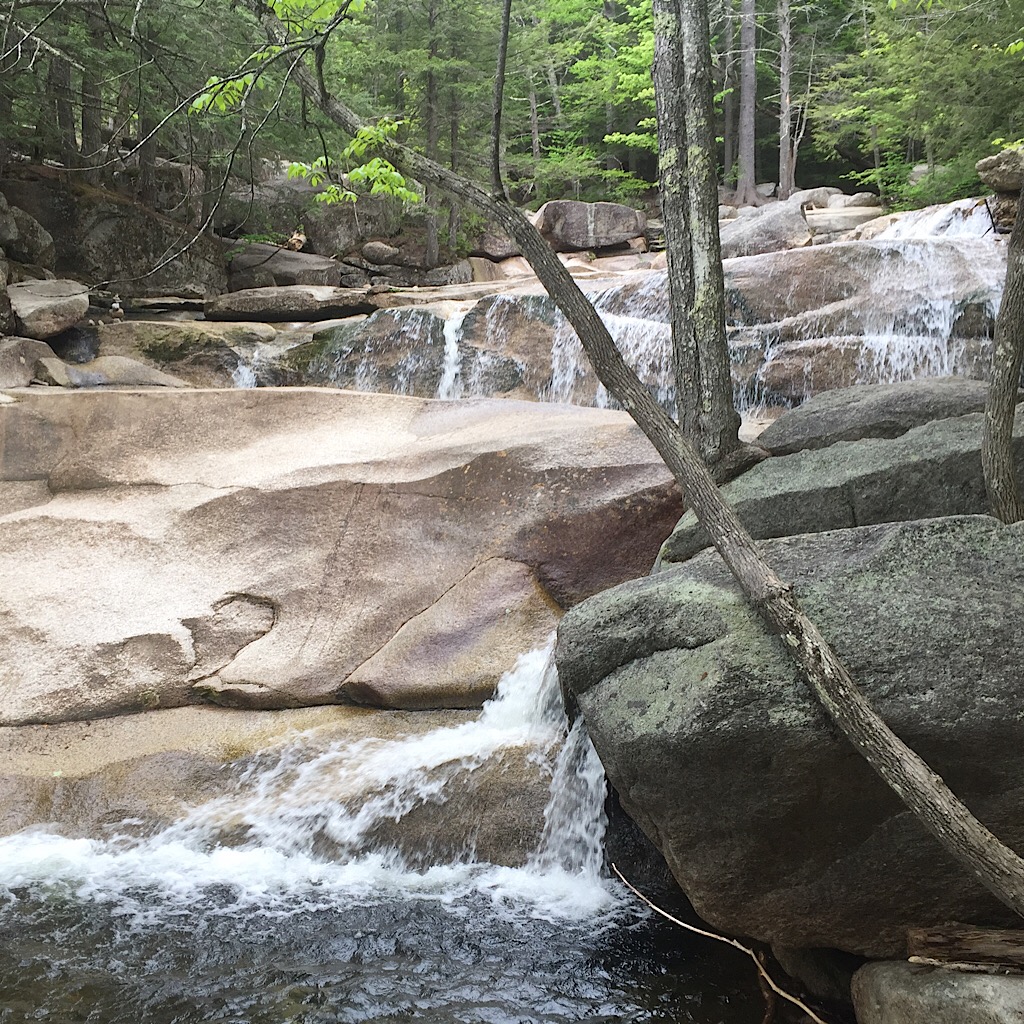 After the falls they peeled off at the junction continuing on another eight-tenths.

It sure is pretty over there. Well done, team.