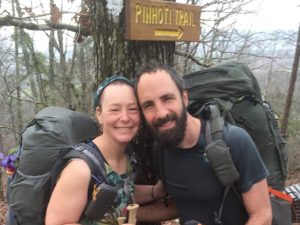 Lovebirds on the go. (Pinhoti Trail.)

In the case of Redline Guide Arlette “Apple Pie” Laan, we really mean Guide’s Winter Off. In typical fashion, Arlette spent the winter crushing big miles with her husband, Rich “Greenleaf” Gambale. Specifically, from December 31st, 2017, to February 28th, 2018, the husband-wife thru-hikers clocked about 850 miles during two back-to-back hikes. The first was Benton-MacKaye Trail, a 550 mile figure-eight involving part of the AT (see map, below). Next up was the Pinhoti Trail at 300+ miles. One might think, especially a norther, that they had it easy in the south, and maybe that’s true on some days, but during this time they experienced wide-ranging and challenging conditions. From snow, to high heat, even a little flooding thrown in, the South’s not as tame as one may think. Temperatures ranged from a low 4°F on the Benton-MacKaye Trail to a what probably felt like a blistering 80°F while on the Pinhoti Trail.

2018: The Benton-MacKaye and Pinhoti Trails

Every winter my husband and I try to go on a hiking adventure. This year we decided to explore the Benton MacKaye trail and make a big figure 8 loop combining it with the Appalachian Trail. If we had time left over we would add the Pinhoti Trail in the end for a total of 850 miles. There may have been less snow in the south compared to our trusty White Mountains in New Hampshire but we still had some brutally cold days. It was fun for us to backpack in such cold temperatures and test our skills and equipment. It’s never this cold down here they said. We survived but I did end up buying a warmer pair of leggings at our first town stop. We only saw one other hiker on the BMT and even on the AT we didn’t see many. And that wasn’t the only advantage of being out there so early. The trees were still bare so we had views for days and on several occasions rime ice would form on trees and grass and turn our surroundings into a magical fairy land. On the Appalachian Trail in the Smoky Mountains we encountered snow drifts and freezing temperatures but the winter boots we had mailed ourselves ahead of time kept our feet warm and cozy. Thank goodness we carried our Hillsound trail crampons with us for on several occasions the trail turned into a veritable skating rink. But again the views were amazing and the only hikers we saw were three southbound AT hikers. Fording creeks in the ice cold was less fun but we hit those in warmer temperatures and just kept on walking to keep the blood flowing. Once we started on the Pinhoti Trail we used up all our good weather luck and it started pouring on us. We were in Georgia planning to hike south but streams were flooding and the churning water wasn’t easily crossed. With more heavy rain in the forecast we decided to flip south and hike back up northbound to where we got off. This worked out fine except that now we got hit by an unseasonal early heat wave! The Pinhoti Trail is actually a really nice woodsy walk with some fine ridge views but after the heat wave we got more rain again and that definitely put a damper on things. I would highly recommend this trail but pick nice spring or fall weather. All in all a great trip. We now feel more confident in winter backpacking and discovered more beautiful country side. —Arlette

And now some maps and photos… 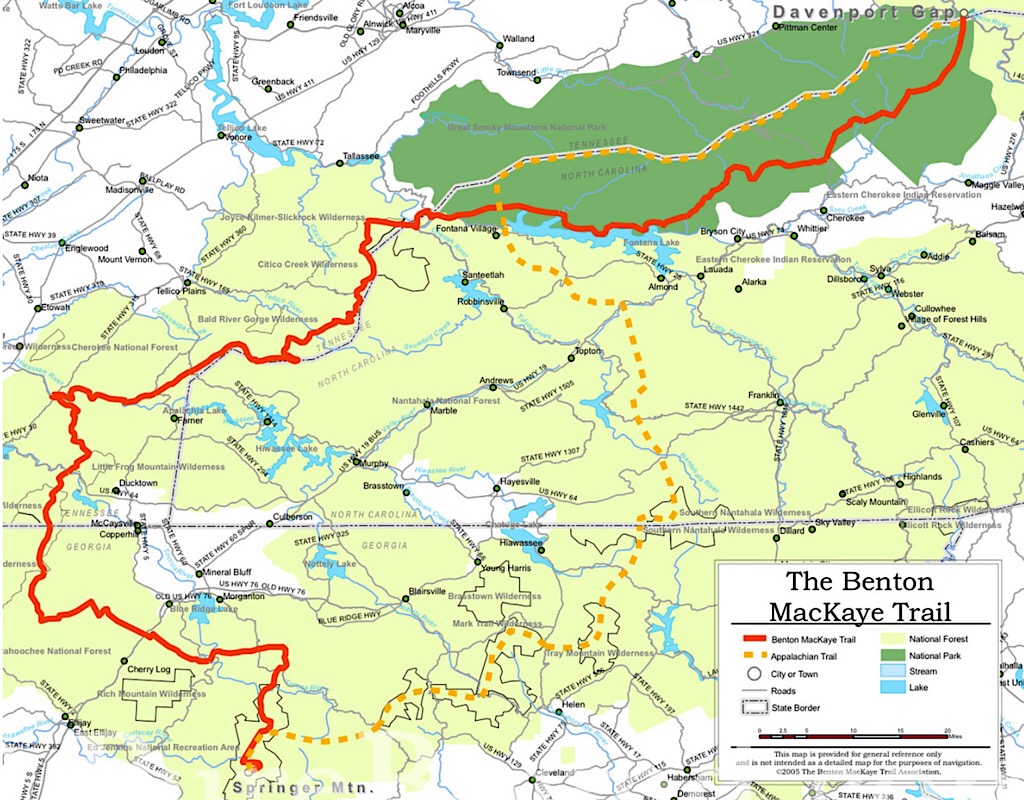 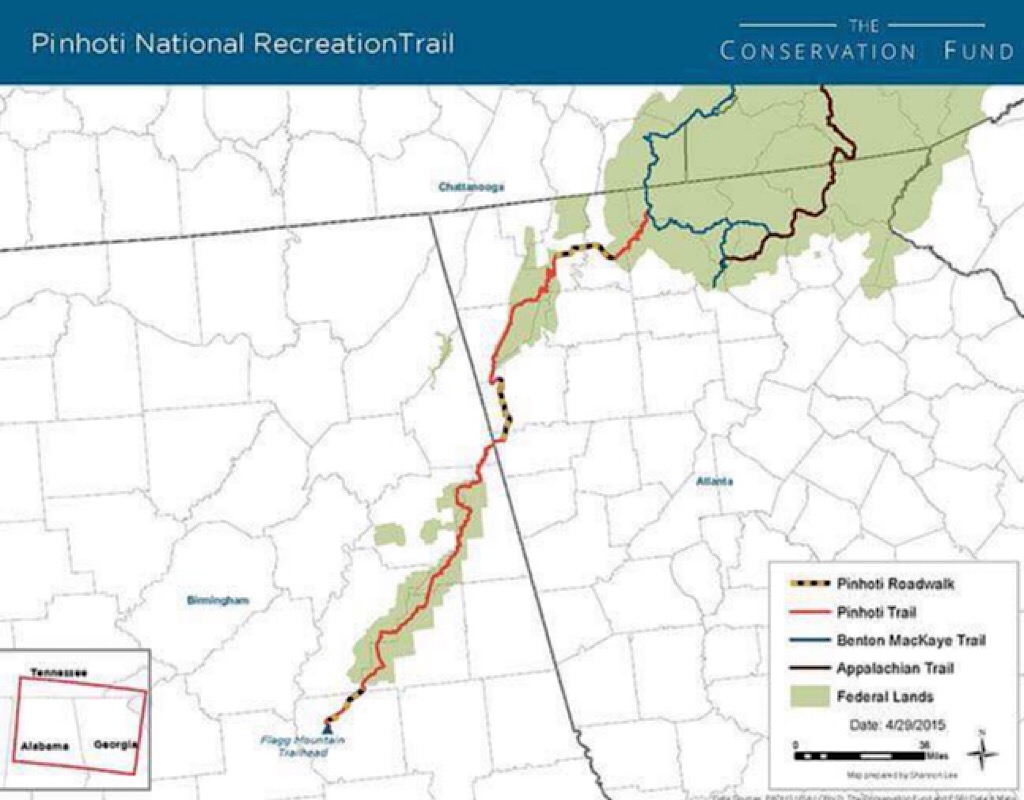 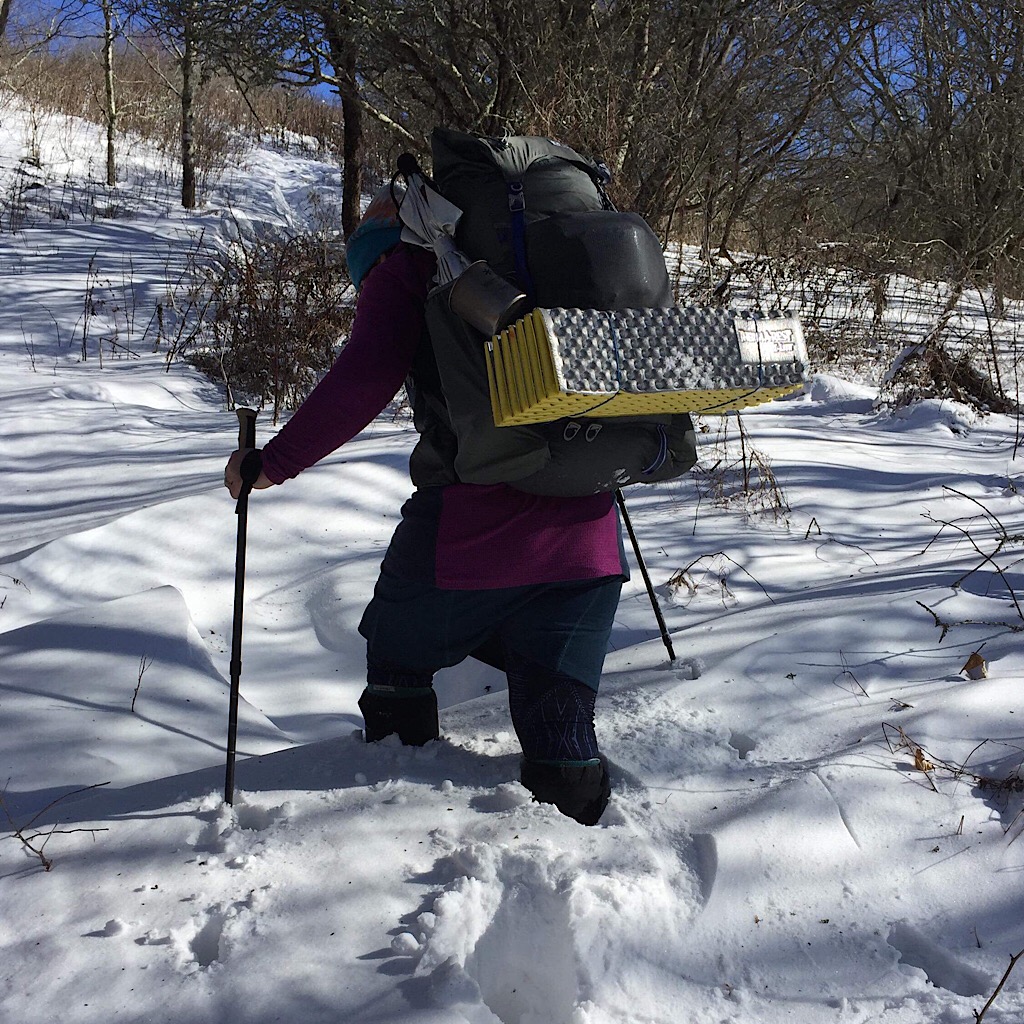 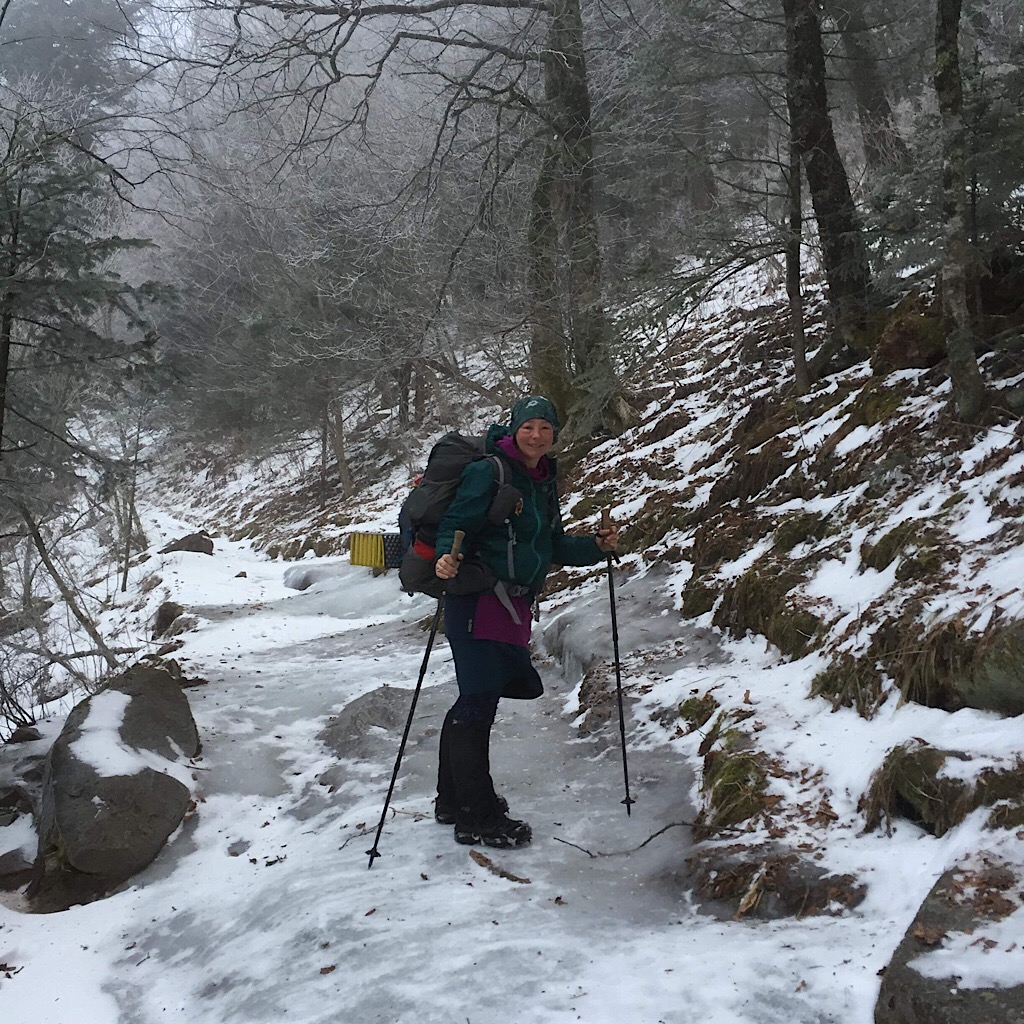 Look at that ice. It was probably less wintery in New Hampshire at the time. (Great Smoky Mountain NP.) 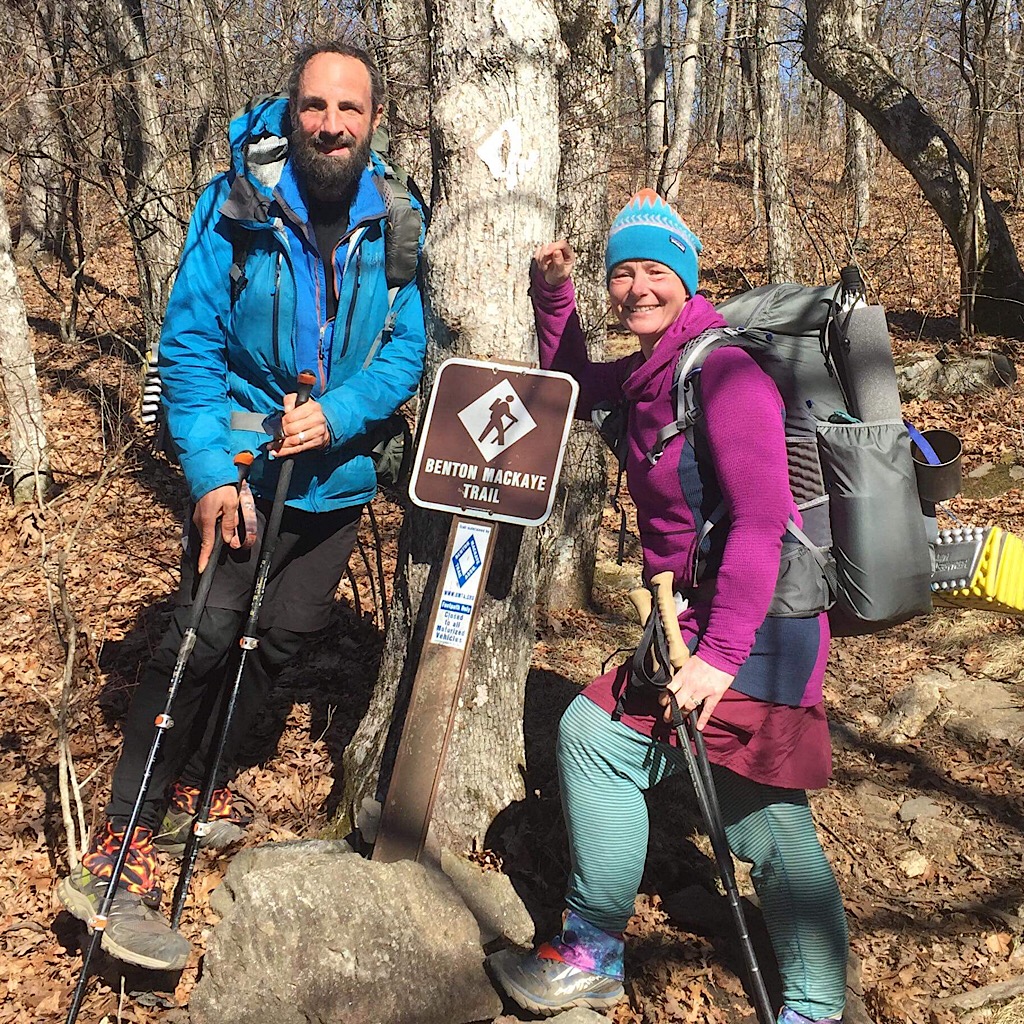 The typical wintery south. (Southern terminus of the Benton-MacKaye Trail.) 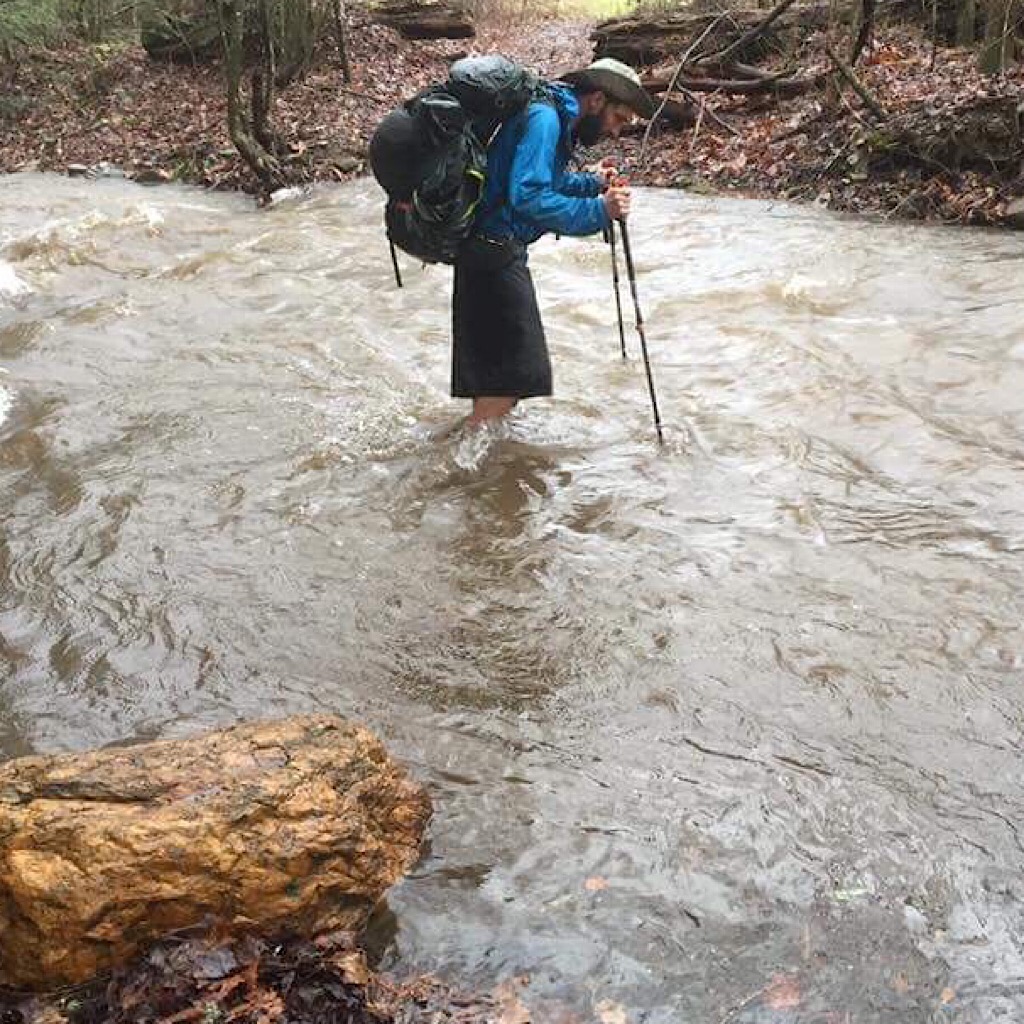 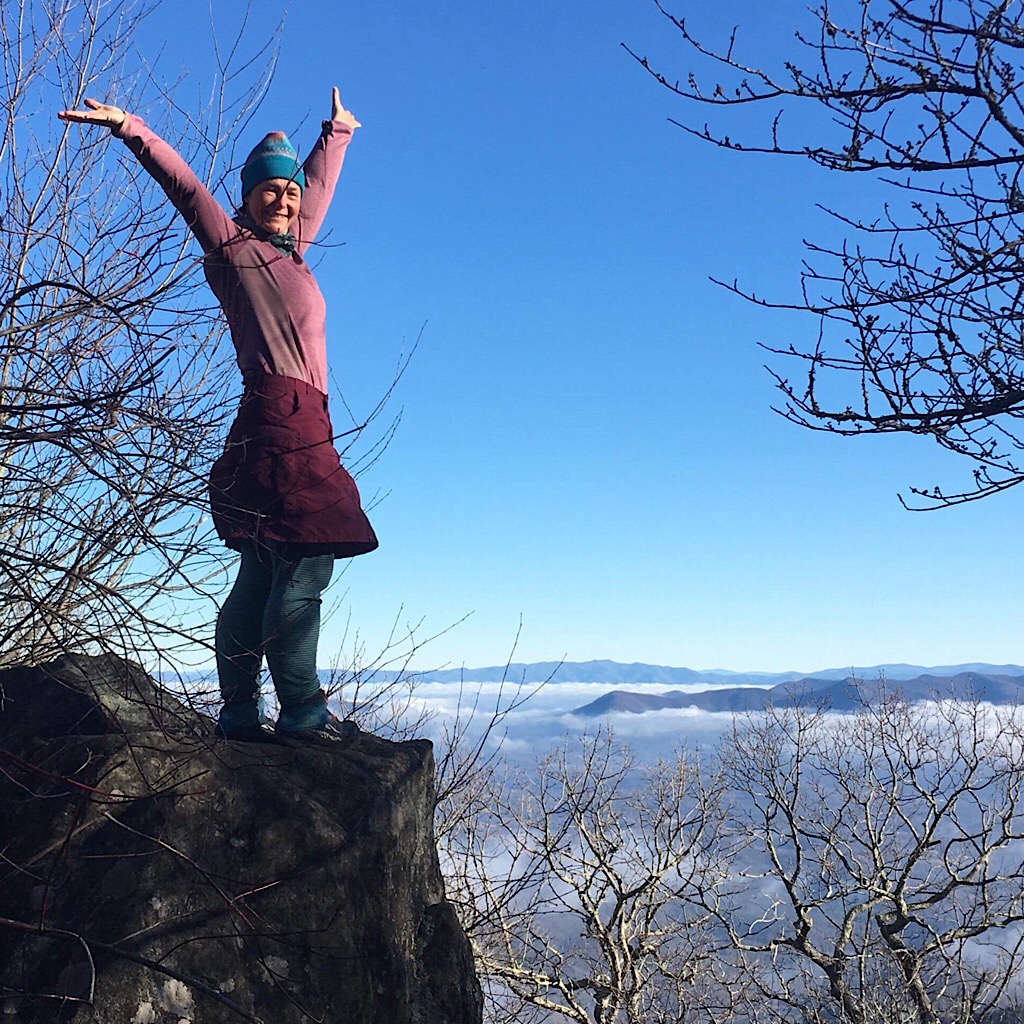 Glorious. (Summit of Blood Mountain on the AT.) 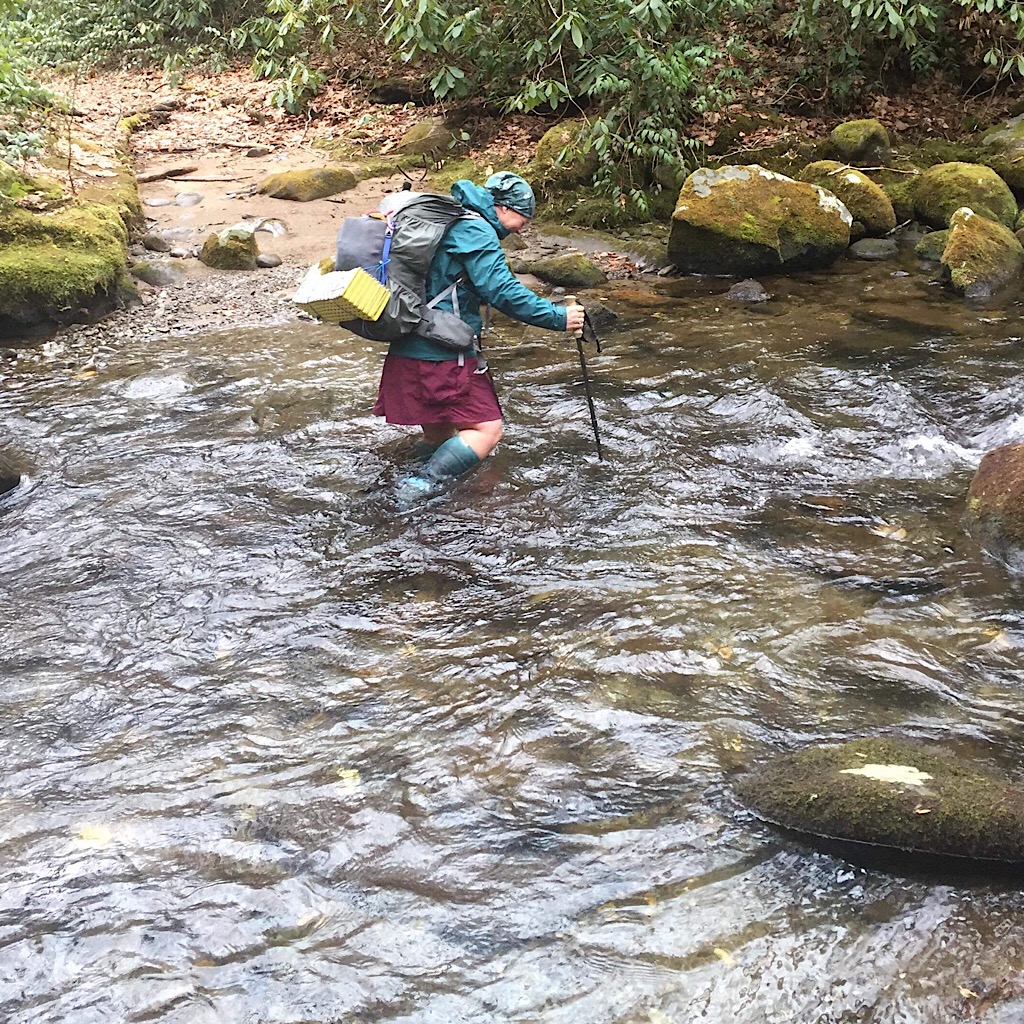 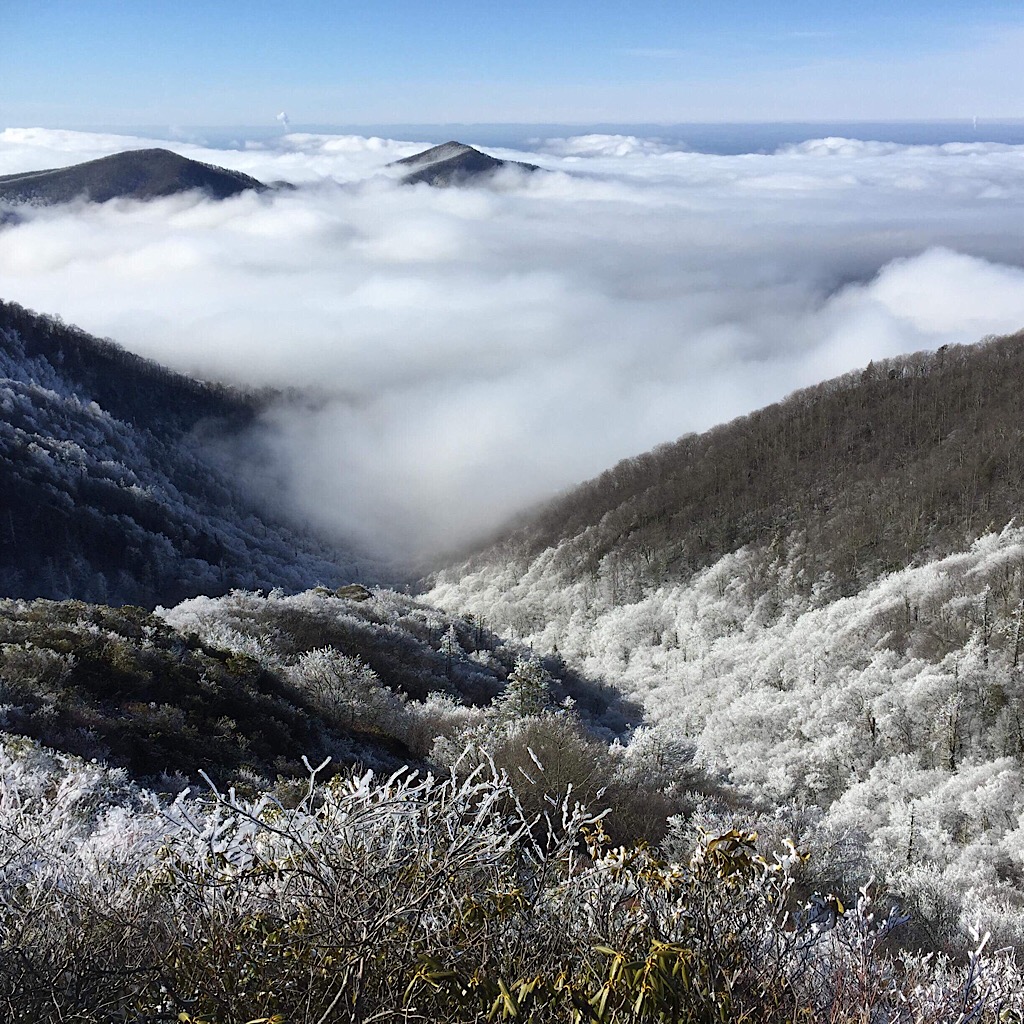 Stunning vista along the Benton-MacKaye Trail. 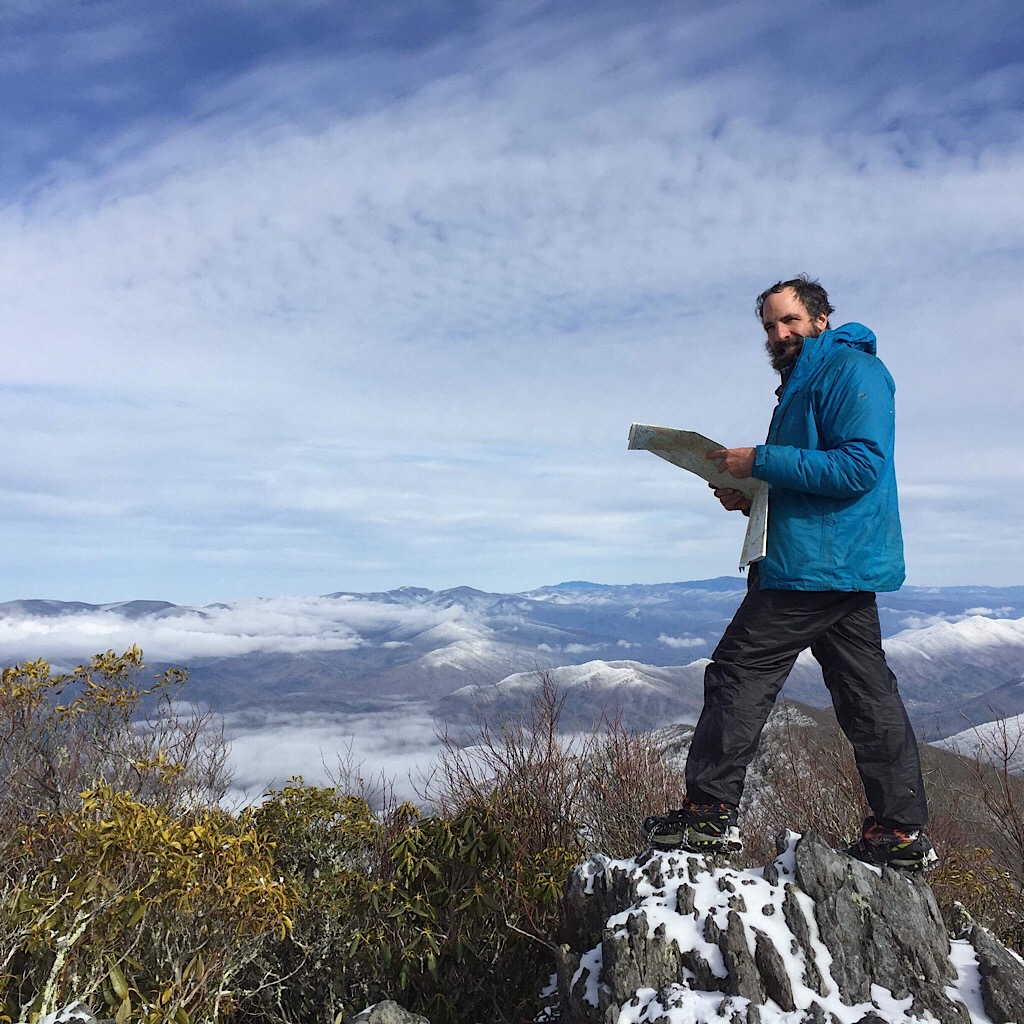 Rich with his newspaper, like any other morning. Okay, maybe not. It’s actually a map. 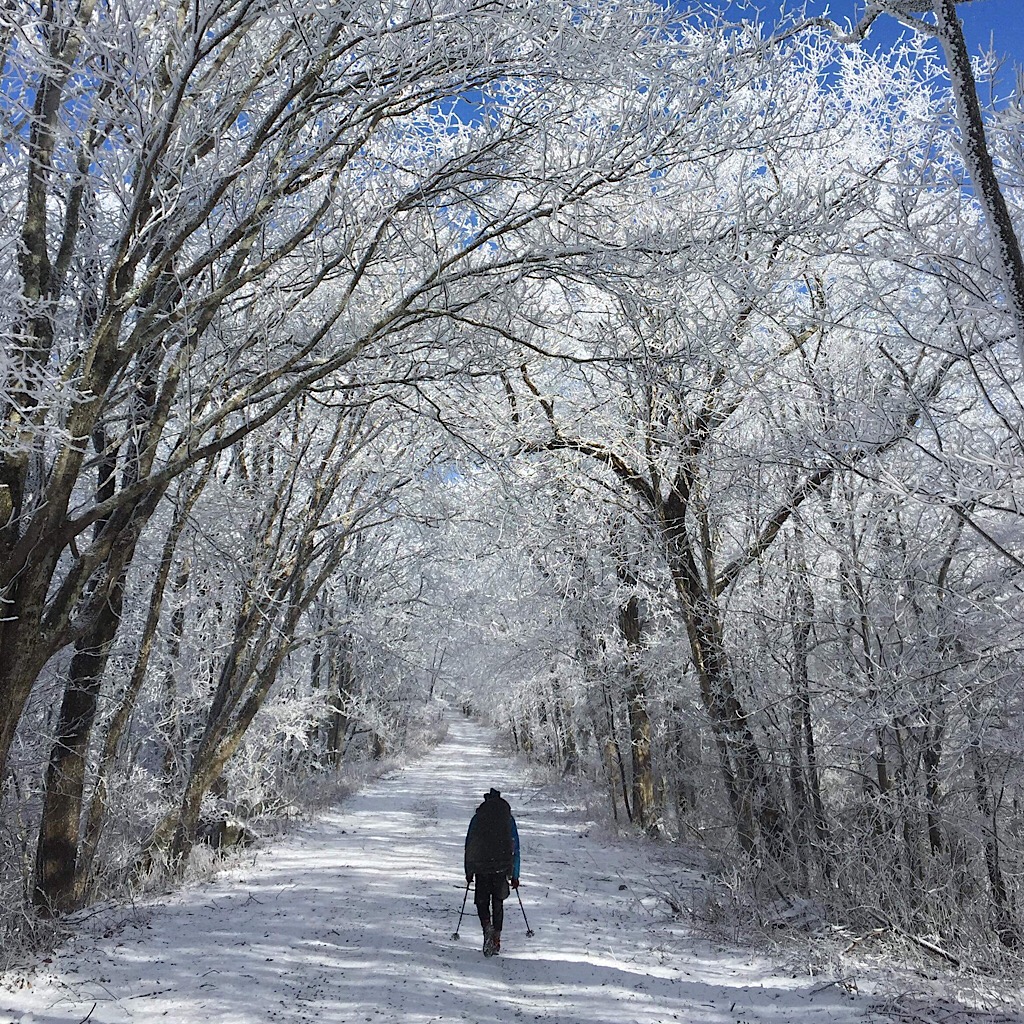 If anyone wonders why… 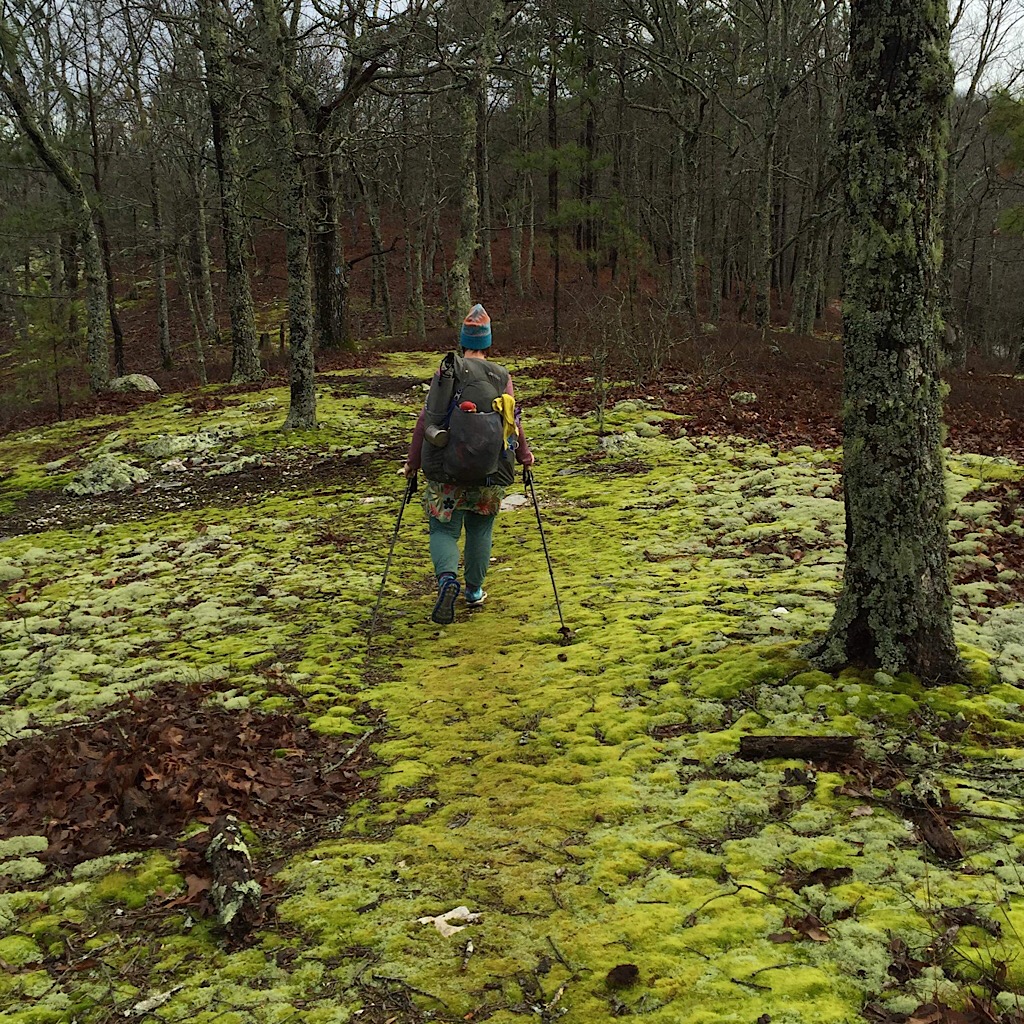 Here is your answer. 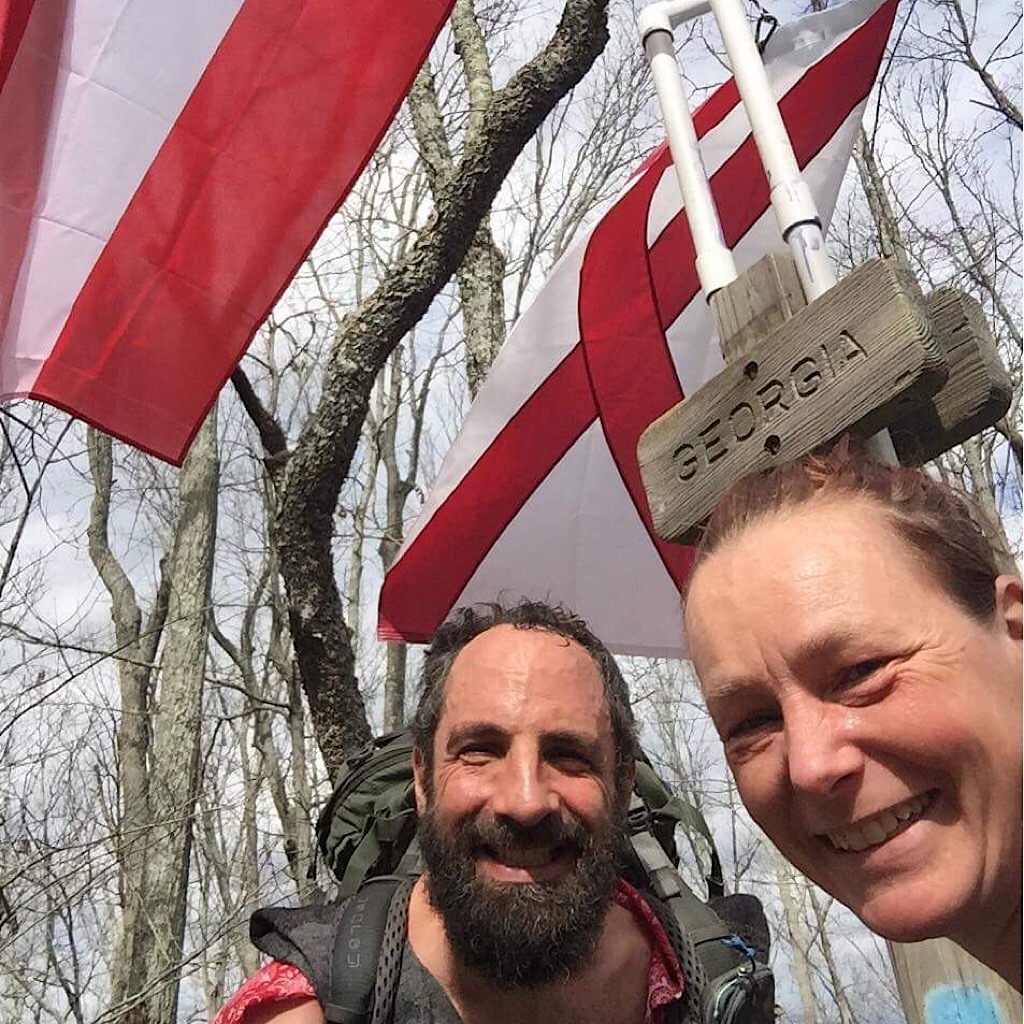 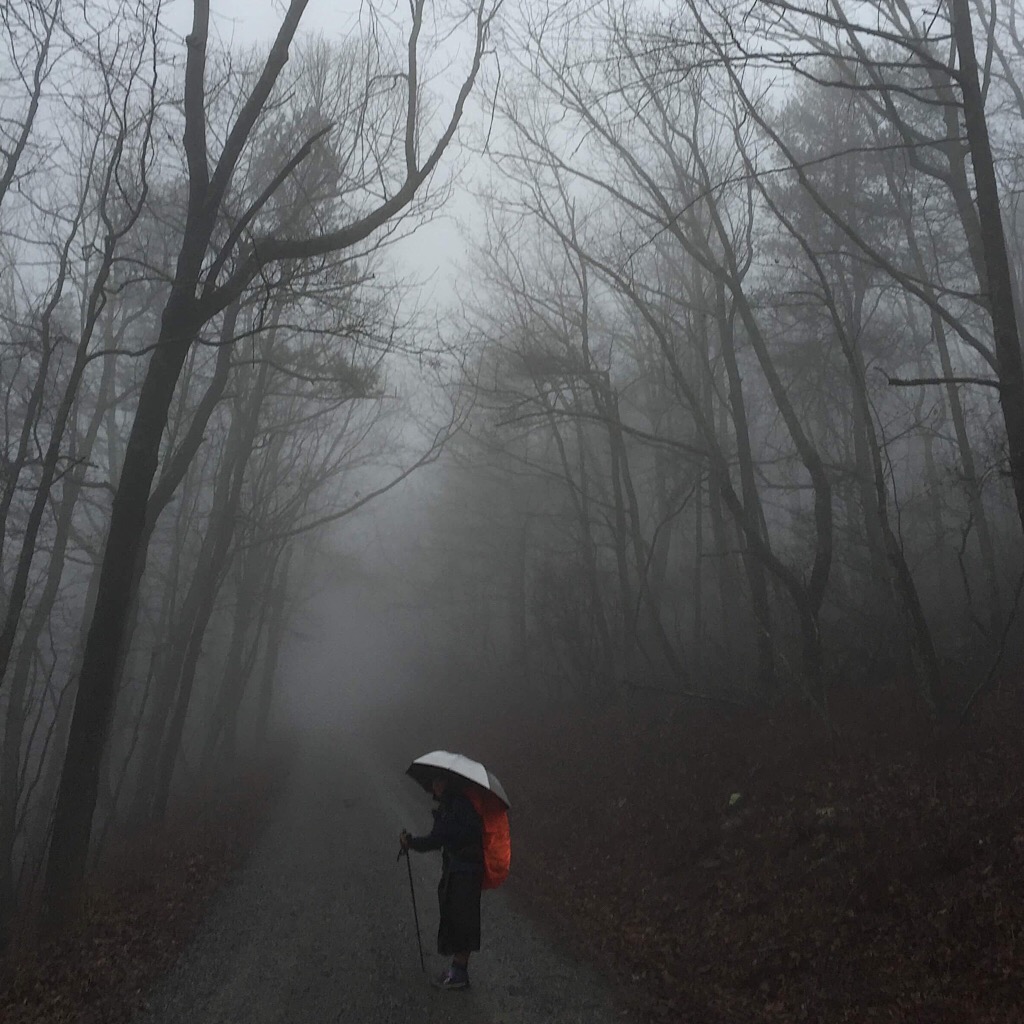 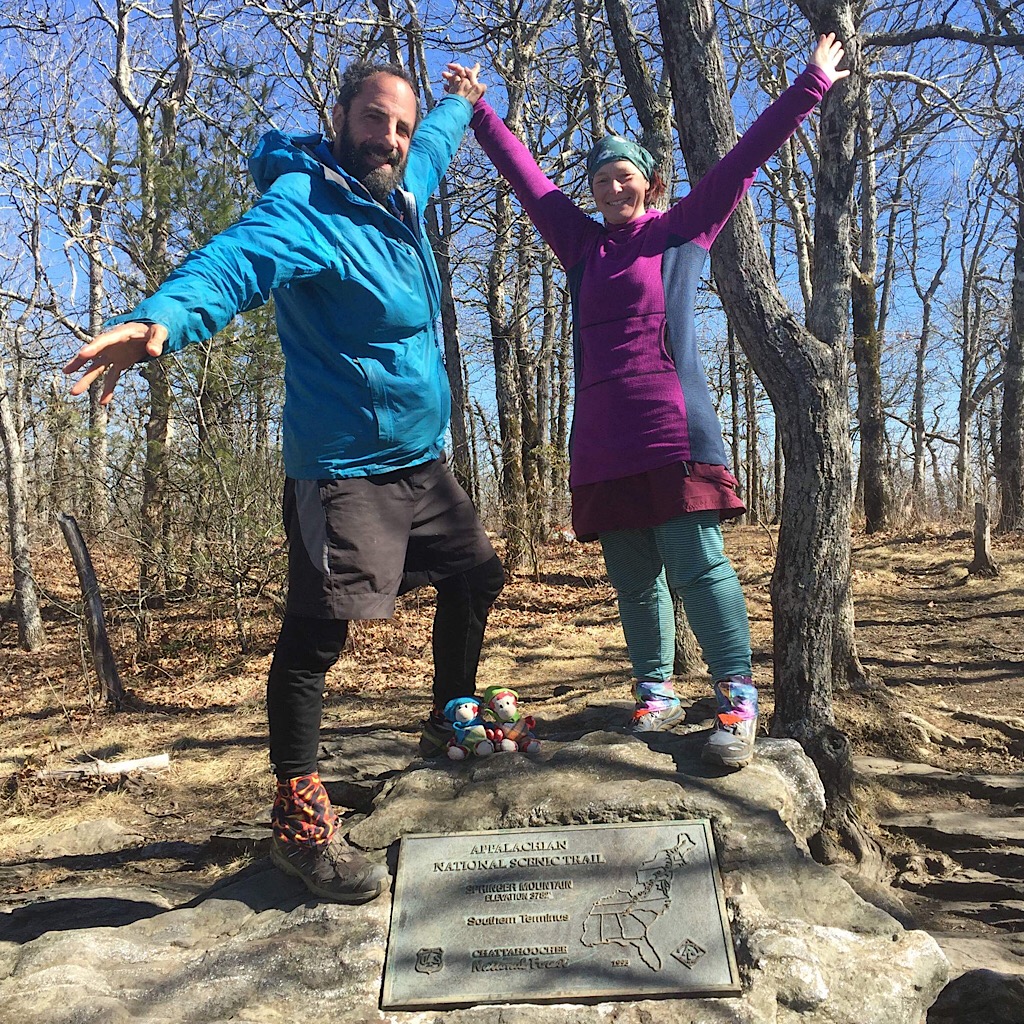 On the AT. Been here, done that. Hey, where is everyone?!

Our thoughts on the matter…

We find it exciting that Arlette spends her winters this way. We’re a little envious. There’s a real sense of freedom to thru-hiking that is hard to describe. It’s an illusion, by and large, we never really escape life’s grip. We must “adult” to survive nowadays. But for a while, since we plan ahead so carefully, the illusion and sense of freedom is deliciously real. Arlette has done a lot of thru-hiking, but now that she’s back and ready for some work, some of you may choose to learn camp craft from her or request a backpack with her, to gain from her expertise.

Speaking of thru-hiking, another of our guides, Bill “Science Guy” Robichaud, is off to start the Appalachian Trail in a couple of weeks. Excitement is in the air. Good luck, Science Guy! We’re rooting for you.