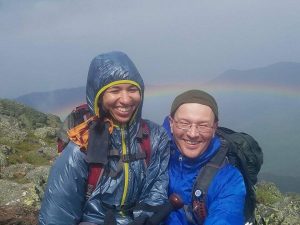 A rewarding descent. Love the smiles.

Seems like it was just yesterday (it was) when Redline Guide Ken Hodges brought a returning couple on a guided hike of Mt Washington. To maximize the hike by decreasing crowds and getting them above treeline more quickly — giving them a fuller, richer experience — Ken chose the Boott Spur Trail with the descent being via the Lion Head Trail later.

It was warm and sunny in the valley and in the notches, but like it is often times, conditions were wilder up on the shoulders and head of George. The Rock Pile offered a mixed bag, weather wise, but also offered some fine rewards as can be seen in some of the photos Ken took (inset and below).

In addition to the photos, Ken also offered this commentary.

On Sunday, June 25th, I guided a Washington hike with our guests, Vladimir and Mariel. The forecast was for occasional showers in the morning, followed by high winds with a chance of thunderstorms late afternoon. Temps were in the 50s. A typical summer hiking forecast for our biggest peak. The summit was in the clouds but was soon visible by mid-morning. Our guests wanted the full Mt Washington experience so we ascended to Boott Spur and started on Davis Path toward the Rock Pile. About a half mile below the summit a light rain started which quickly turned to hail followed by even heavier rain. This was about the time that we met up with Dave, a friend of Vladimir’s who had hiked up separately to greet he and his wife on the summit during their quest. We stayed at the summit long enough to dry out and eat a bit before heading down. As soon as we hit the Tuckerman Ravine Trail the weather cleared and we were treated to a beautiful rainbow arcing over the valley below. I jokingly told Mariel and Vladimir that that is just one of the services we provide. From the Tuckerman Trail we got on to Lion Head Trail enjoying the day and the now incredible views along the way. Once off of Lion Head we got a bit more rain, but it didn’t dampen our spirits. It was a long day with excellent experiences and great conversation. I know they found it memorable. –Ken Hodges 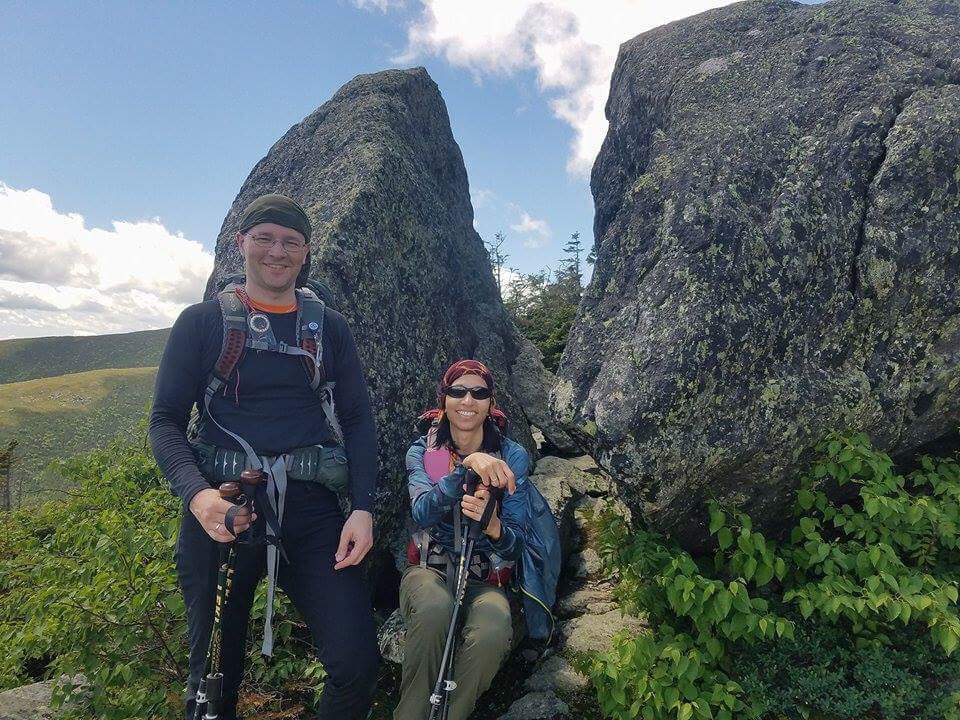 Stopping at “Split Rock” on the way up still well below the summit shroud. 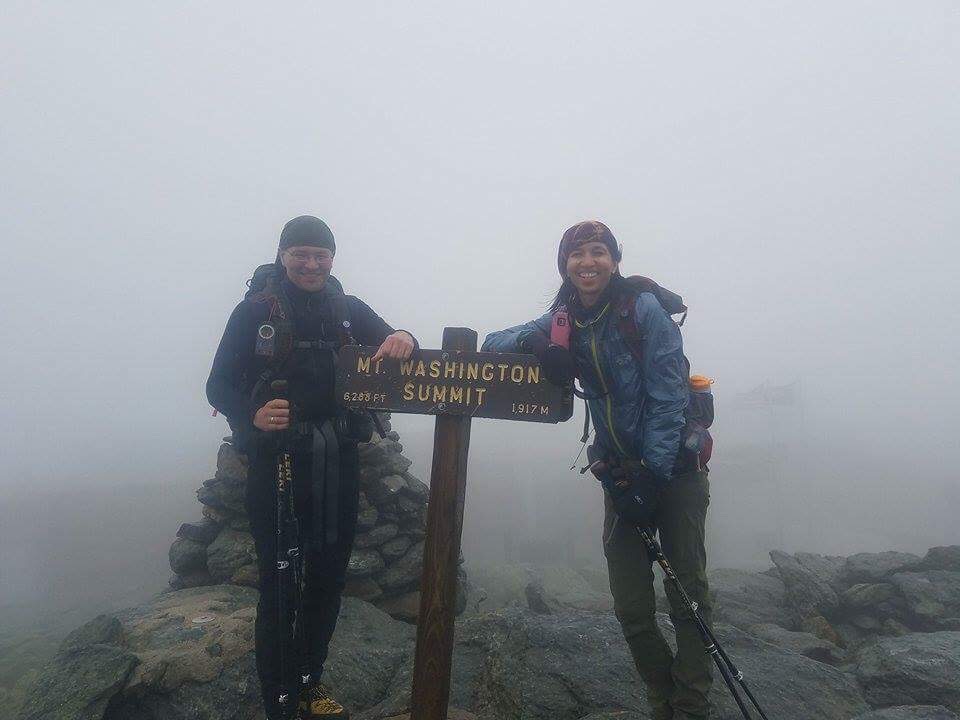 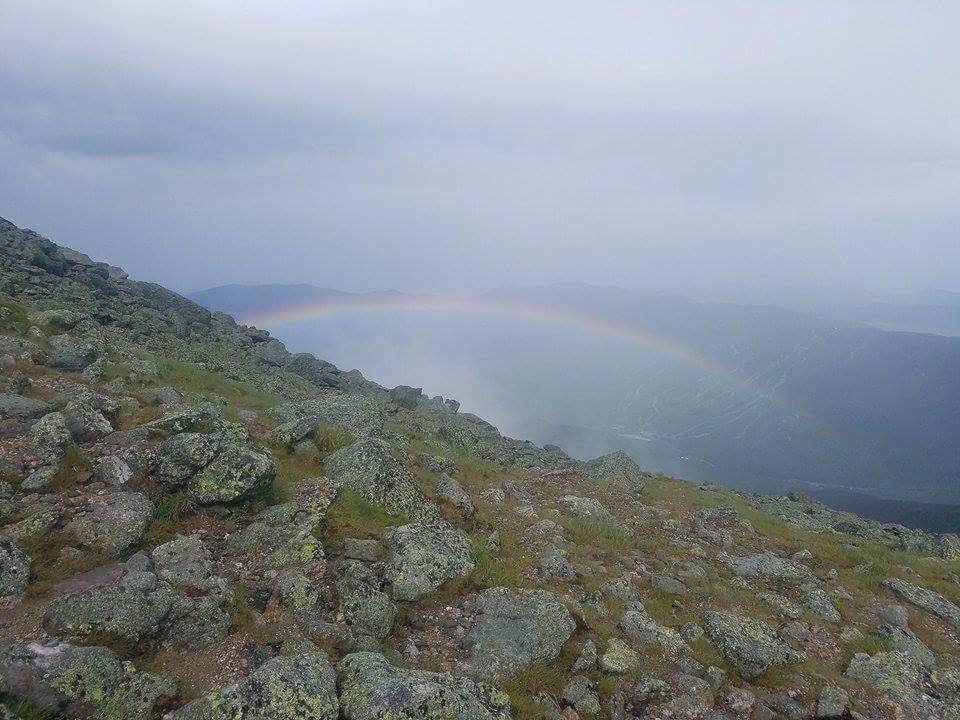 A rainbow arcs across the valley below. Beautiful. 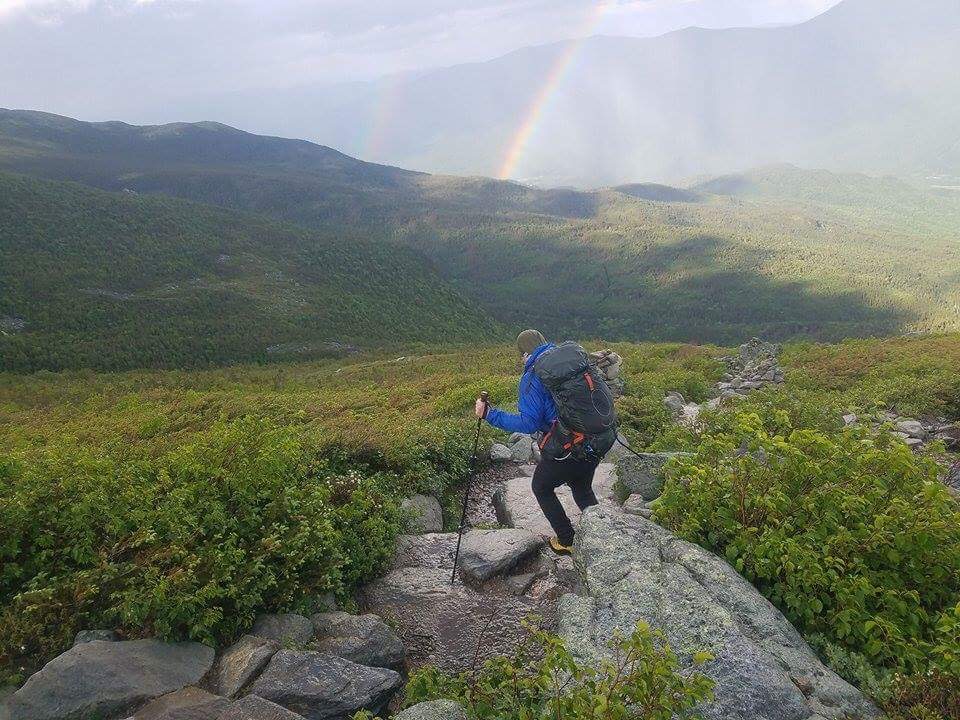 Congratulations to Vladimir and Mariel on your successful summit, and to Ken for leading and a job well done!