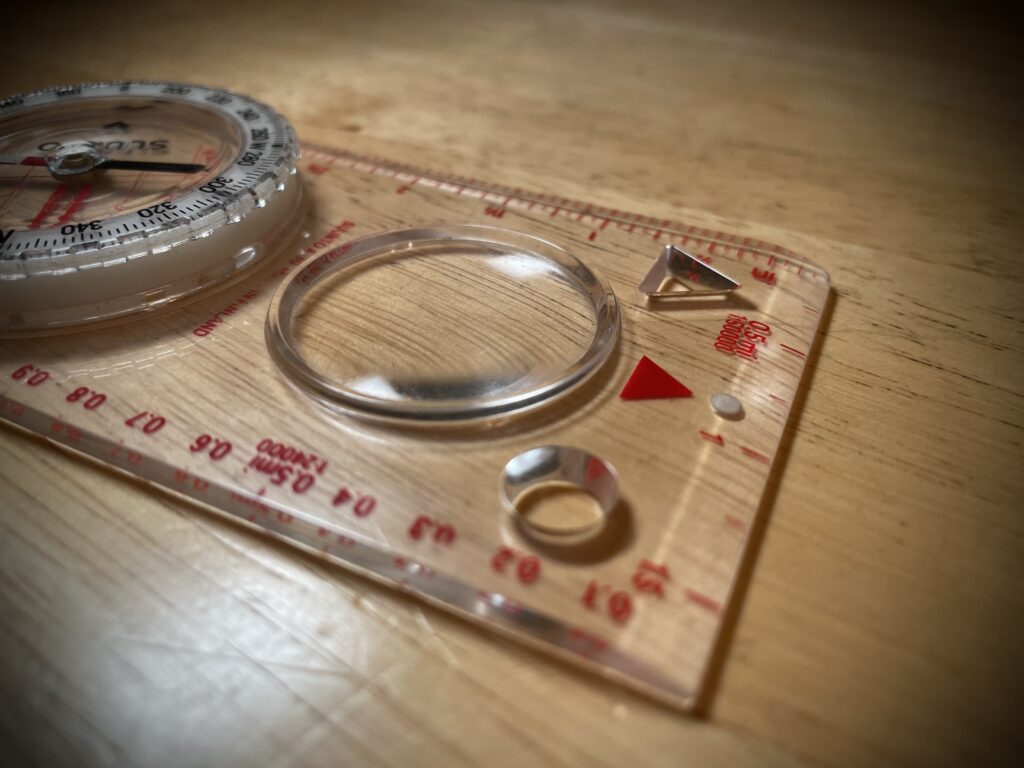 We could say it’s all about… Finding North

It’s 8:09AM, class. Let’s head over to the bar at Stonehurst Manor for one of their powerful espresso martinis. What? No, you say, it’s too early to drink? They’re not even open at this time? Are you going to let time control your life?! Those numbers, they seem to have a lot of meaning to you, don’t they? You let them run you, to a certain degree? Psst… want to get that way with another set of numbers?

In our Wilderness Navigation class we have students employ critical thinking to such an extent that they are able to actually guess the bearing of a line drawn on the map without even using a compass — with surprisingly great accuracy. They are able to do this when they understand that a bearing, the actual number, has a relationship with north. To put this another way, one that will probably be more relatable, the time on a clock, that actual number, has a relationship with noon — at least the minute hand does.

As shown in the graphic, a quarter of the way around a clock from noon is 15 minutes. That same position on a compass, a quarter of the way around a compass from north, instead of noon, is 090 degrees. This is also known as east, but using numbers is a lot more precise. So let’s continue: Half way around the clock, the position opposite of noon, is 30 minutes. On a compass, that position is south or 180 degrees, the opposite of north — the expression “do a complete 180” comes to mind. Are you getting it? If we continue, we will say that three-quarters around the clock is 45 minutes past noon, right? And on the compass, well, you’d add another 90 degrees, so that position is west or numerically, 270 degrees past north. All the way around a compass, a full circle, is 360-degrees (90 times 4), but we refer to north as zero, numerically-speaking. 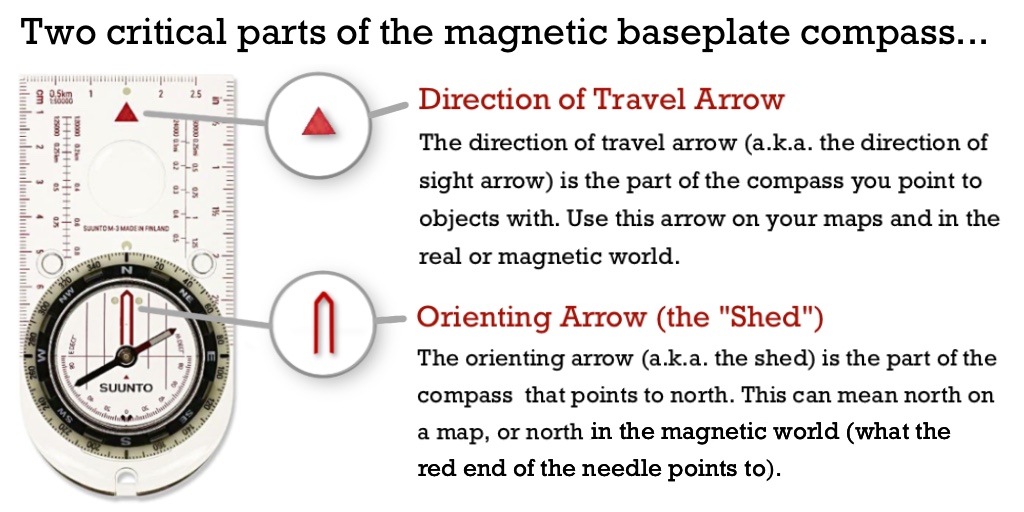 Understanding this relationship between north and the bearing or direction, just like the relationship between noon and the number of minutes past the hour, is very empowering. But only if we know where north is and point the “shed” or “orienting arrow” at it. Only then can we determine the numerical direction or the “direction of travel arrow” on the compass’s baseplate. 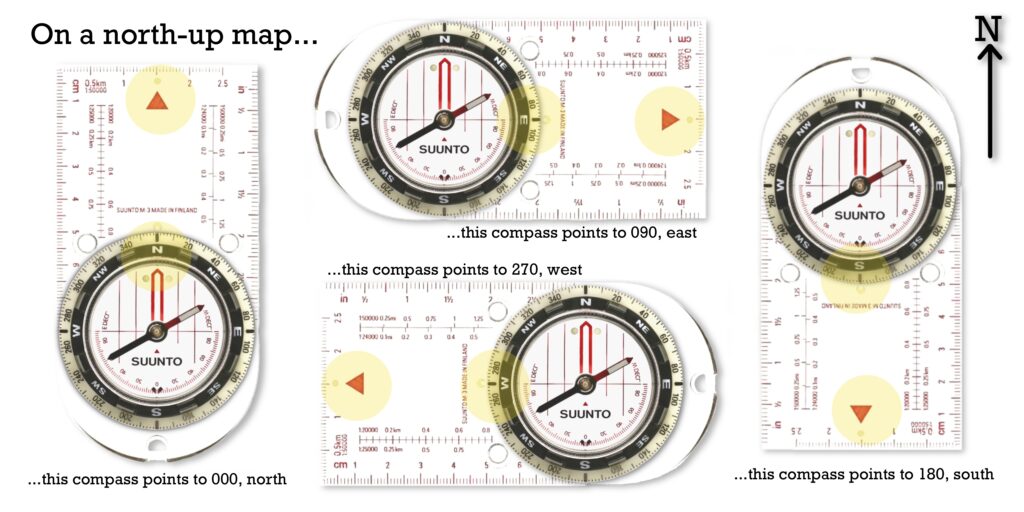 So where in the heck is NORTH?

On a map it’s usually straight up to the top of the map (look for a declination arrow to confirm, see next image). We call it “true north.” There are even “orienting lines” within the face of the compass to help with this alignment with north on the map. “Declination,” by the way, is the difference between true and magnetic north, but that is going beyond the scope of this basic article.

With a compass, however, north is what the red end of the needle points to. We call it “magnetic north,” and we would turn the “shed” or orienting arrow to its position. In both cases, the number the “direction of travel arrow” on the compass’s baseplate points to, will be a number relative to north. Right?

So, in keeping with our theme, in the graphic below, starting on the left side and cycling clockwise through the images, the direction of travel arrow on the compass baseplates is 000, 090, 180, and 270 degrees. These directions are relative to magnetic north. 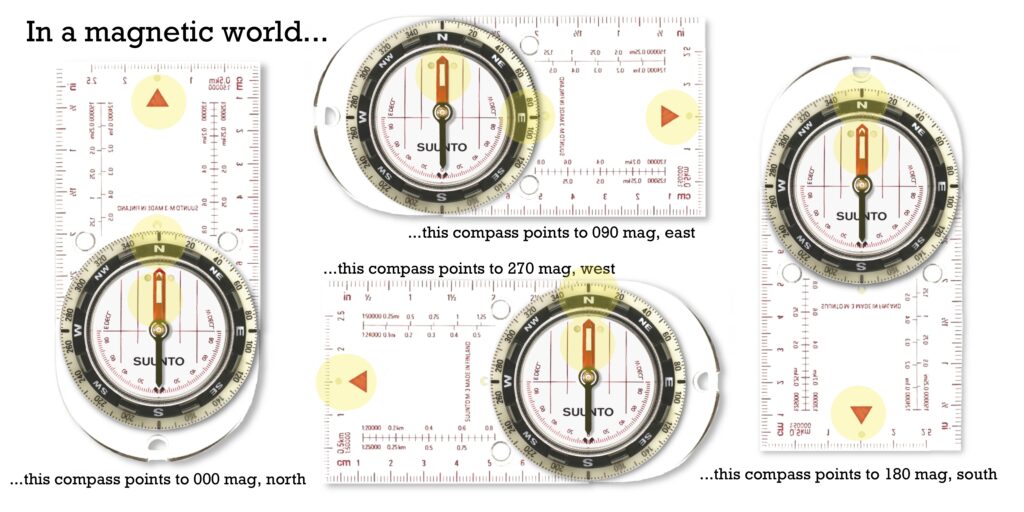 From here you can navigate your way to a second cup of coffee, then maybe… well, re-read this a few more times if you need. The concepts in this article are central to the comprehension of these old school aids to navigation. If this article is well received and well understood, perhaps another installment will be published covering some of the other fundamentals. Or it’s back to technical writing school. For more info, now, check out this old but still useful tutorial. Otherwise, classes are available.