It’s that time of year when hikers swell in numbers up here in the White Mountain National Forest resulting in us having three trips in the same weekday! Two were private tours: one, a trip to Iron Mountain (elv. 2726′) in Jackson for a regularly returning pair of local hikers getting back into it led by Redline Guide and owner Mike Cherim; and the second a tour up Mt Whiteface (elv. 4020′) led by Jean Lee. Our third trip, this one led by Ken Hodges, also took place on Whiteface.

Tours One and Two

We will focus mainly on Ken’s trip in this post, but in quick summary fashion, the other two went as follows:

The main focus of this post, as noted, is the tour led by Ken. It was a non-private, open hike so we got more photos and more story as a result. That said, in a nutshell it went just like Jean’s: Ken led a single gentleman, Gordon, up the Blueberry Ledge Trail to the ledges, they also took Rollins Trail around the cirque passing the actual summit as they went. And likewise upon reaching the junction they decided to descend via the Dicey’s Mill Trail back to go instead of bagging Passaconaway.

Our guest, Gordon, a 75-year-old active college physics professor, was pretty fit. He regularly swims and participates in zumba. He also had a long history as a hiker — starting at the tender age of eight. He had hiked trails like the original Adam’s Slide Trail and enjoyed scrambles, but it had been a while and he wanted to prove to himself that he could still get out there and do it. The choice of Whiteface was something Gordon suggested for himself, an arbitrary decision, but after interviewing him, we felt it would be a suitable choice. It is a fun trail on a cool mountain.

They made good time. Though not as fast as Jean’s tour — there was a big age difference between these two guests — and despite the heat and humidity, they had an enjoyable hike. One of the things that really stood out for them was finding bear feces of all things (see photos below). Why is this significant? First it answers the age-old question about whether or not a bear does his business in the woods. Second and third, it was huge (estimated 1¾” in diameter), and steamy fresh. They were obviously hot on the heels (or paws) of a large black bear who was simultaneously ascending the same trail.

Another standout moment was finding a large white birch tree. So large that to the best of Ken’s recollection, it was the biggest white birch tree he had likely ever seen in his life. Normally jumbo birches like this are yellow birch, not white.

That’s about it. Gordon wanted to hike something so they did, and both guide and guest had a great time doing it. Below are a few photos Ken took of the trip. 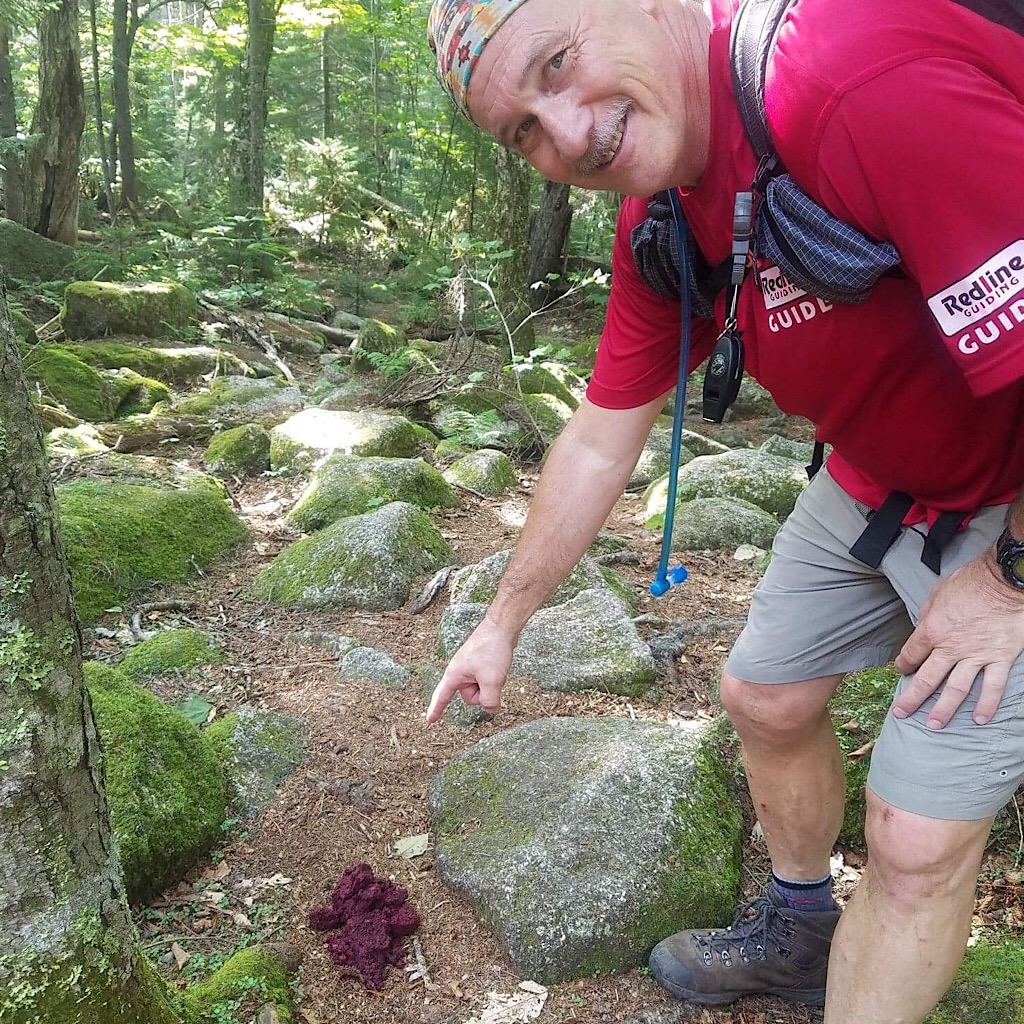 Ken points out a fresh pile of bear scat. 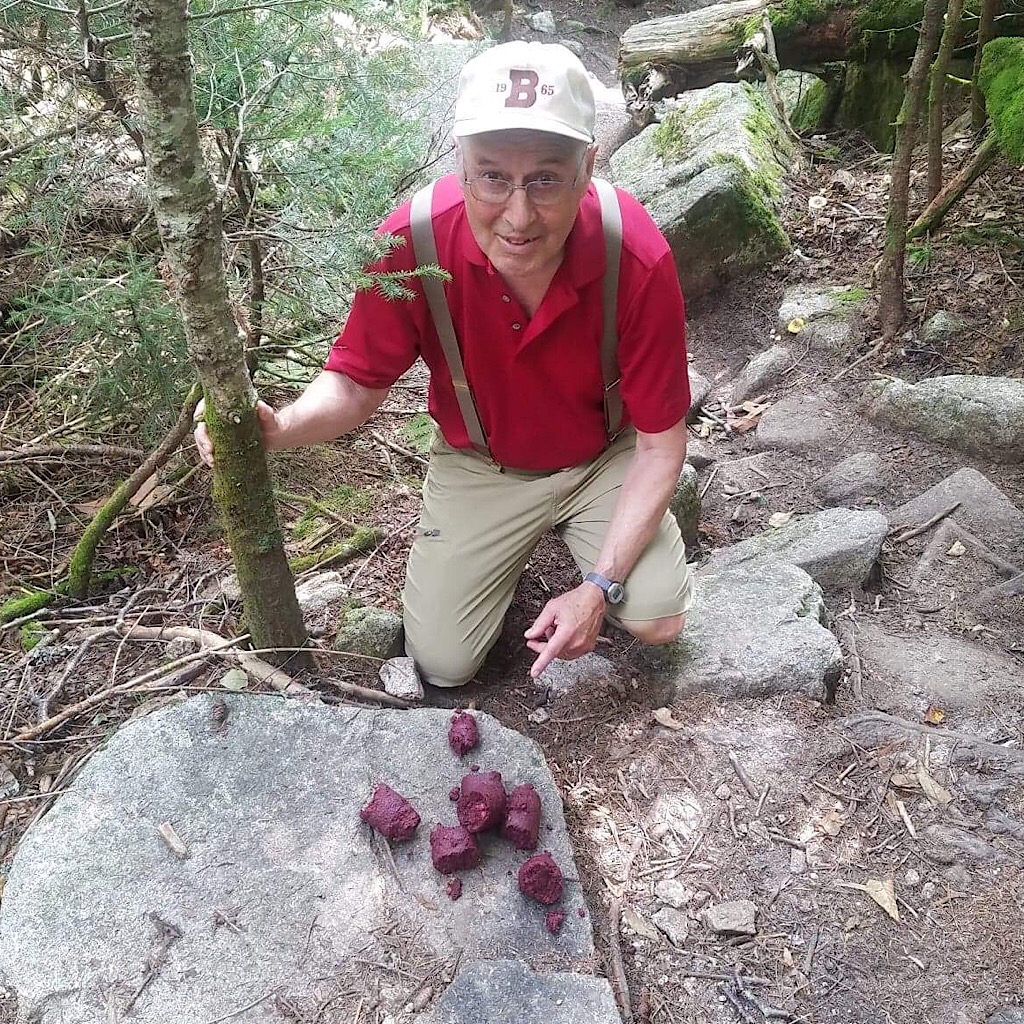 It’s noteworthy. They are following a big berry eating bear. 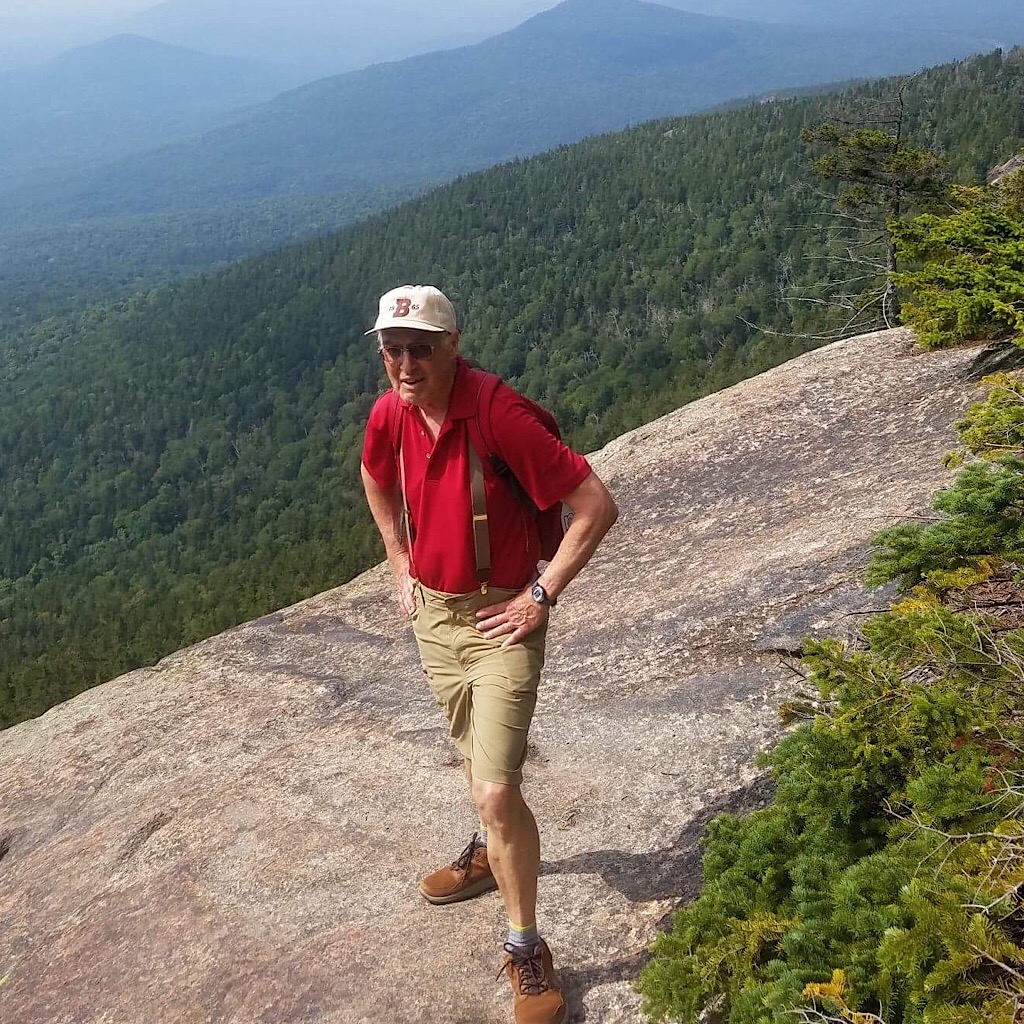 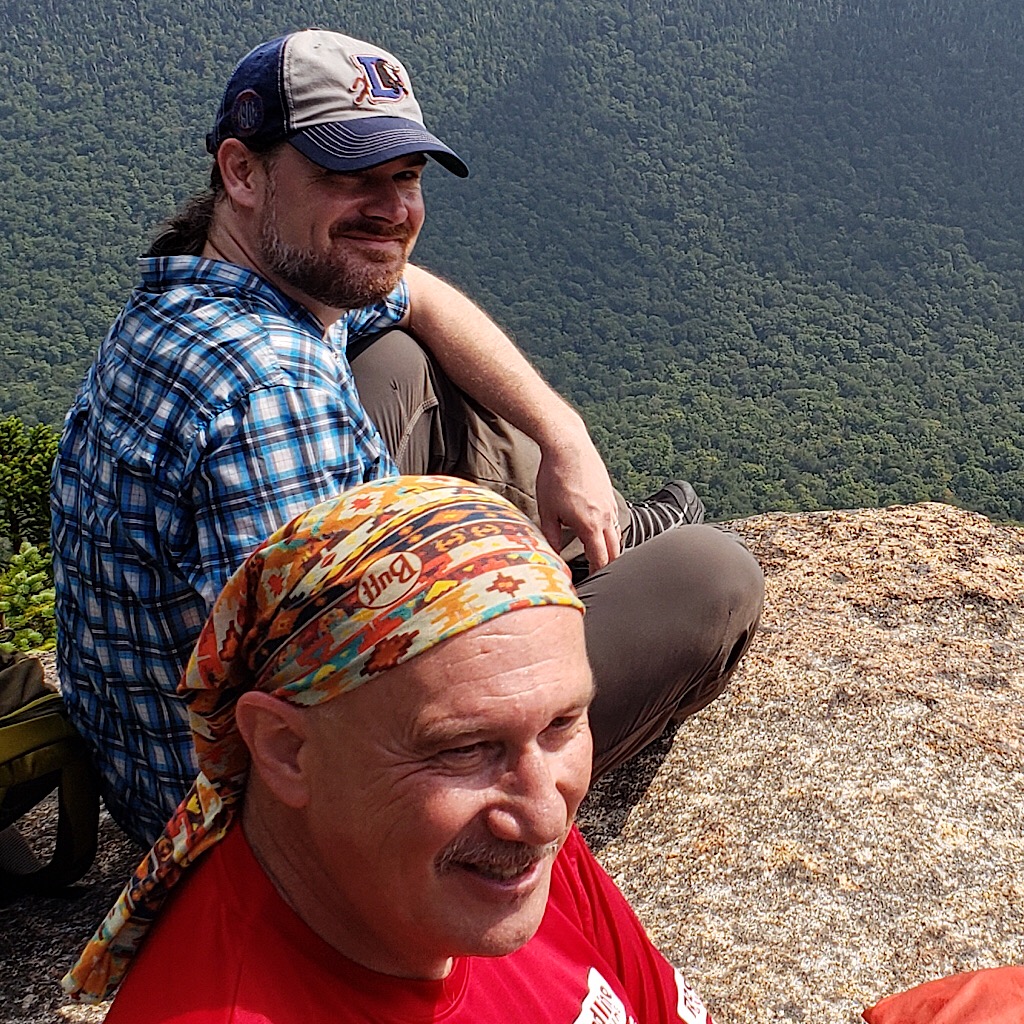 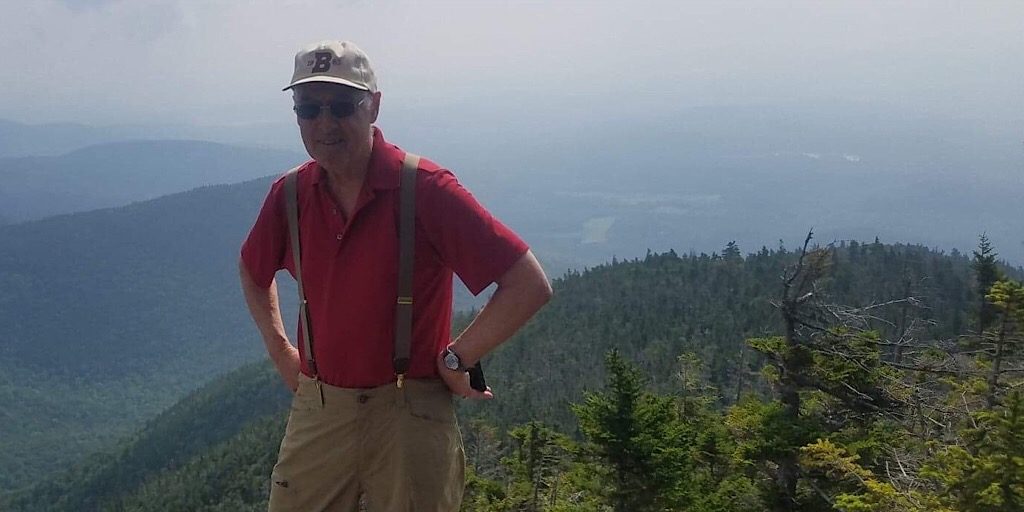 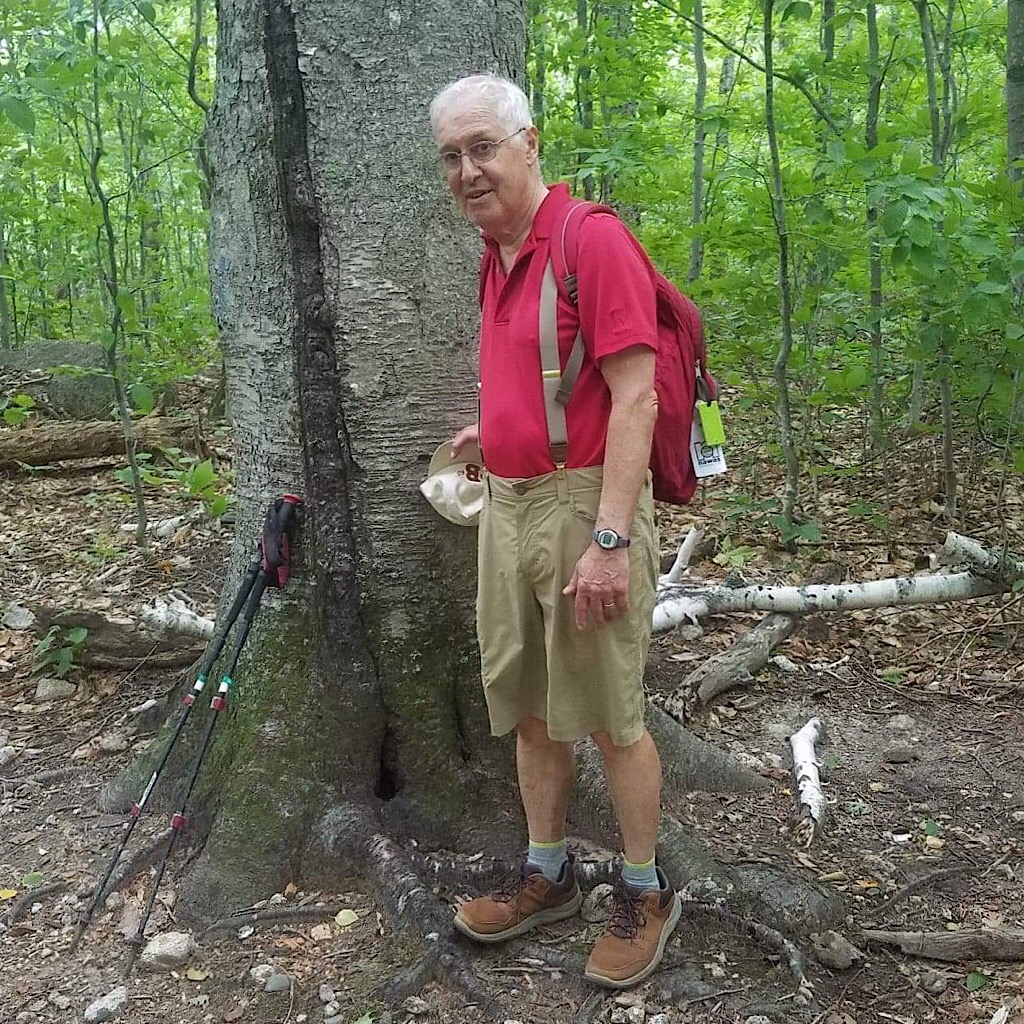 Gordon standing next to a massive, healthy white birch tree. 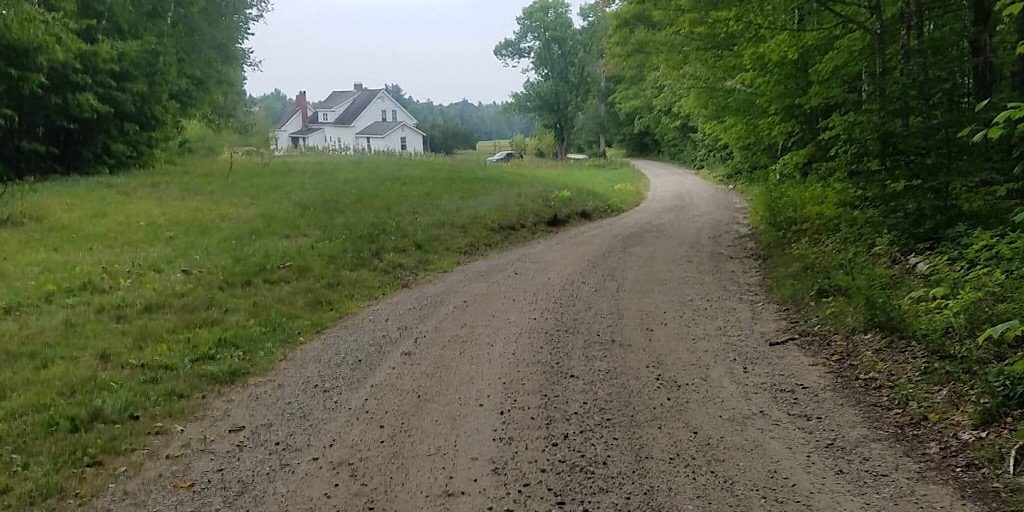 Congratulations to all on reaching their respective goals for the day, and thank you for choosing Redline Guiding.