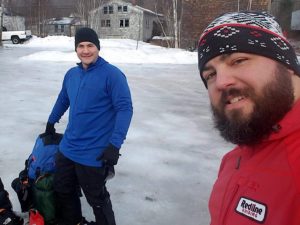 Starting out at Lowe’s Store.

Winter camping isn’t supposed to be about toughing it, suffering the cold, or feeling uncomfortable. That is one of the fundamental truths we teach, along with the how-to required to make this sentiment a reality. That said, Sunday into Monday the temperatures were mild enough to not have to seriously test ourselves in this regard. And that’s good because Redline Guide Álvaro Marques was out there showing one guest, Woody, how to get the most out of a winter camping experience and to hike some “4000-footers” along the way.

Woody is a New Yorker and isn’t new to hiking or camping, even in the winter — he is experienced in the Adirondacks — but he is new to winter camping in the Whites, and at such an elevation. Apparently, because of Adirondacks rules, camping above 4000-feet isn’t allowed. This was going to be a great experience for Woody.

The original plan was to traverse the Northern Presidentials ascending Jewell, bagging Mt Jefferson (5716′), then camping in Edmand’s Col with the idea of grabbing Mt Adams (5799′) and Mt Madison (5366′) the next day. That said, a lack of snow (winter alpine camping rules require two feet of snow) and high winds above treeline (being a safety concern) suggested another plan for day one. Álvaro felt going up Lowe’s Path then hitting Randolph Path to the Perch Path and “The Perch” (a Randolph Mountain Club shelter located at 4313-feet) would be a sound idea. It really was, barring the final one mile section of Randolph Path where the duo encountered unbroken deep snow which slowed them considerably. 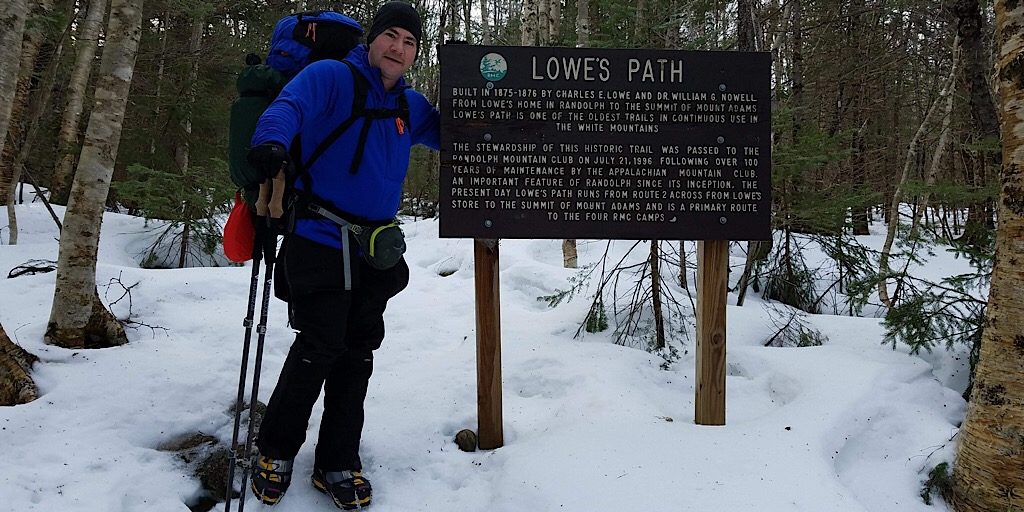 The historic Lowe’s Path is an ideal point of entry considering the weather. 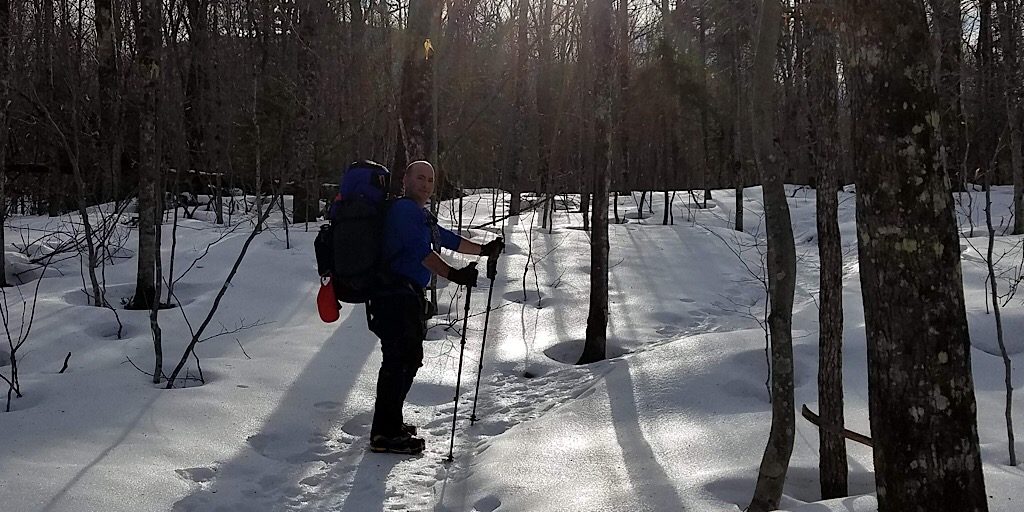 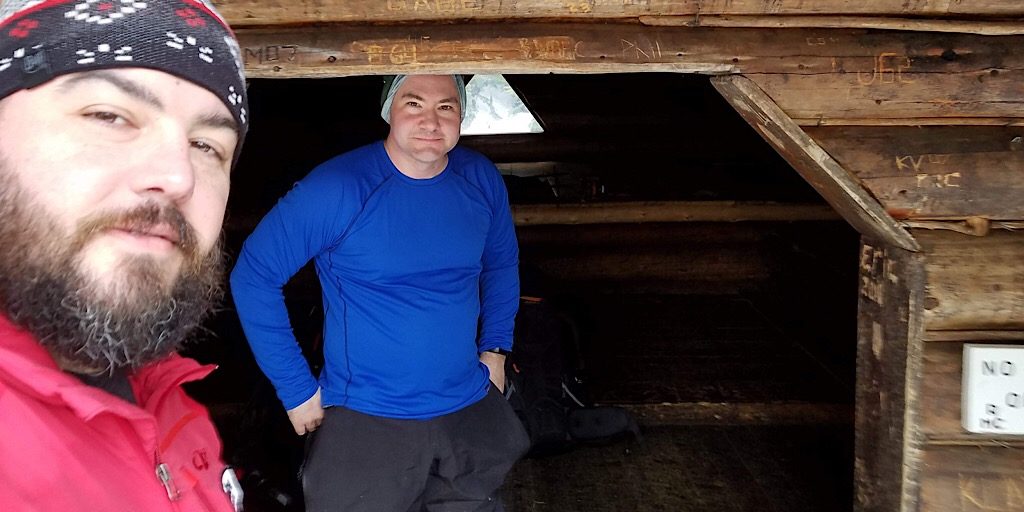 Taking a break and putting on crampons at the RMC’s “Log Cabin.” 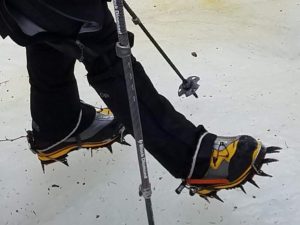 They did make the shelter, nonetheless, but between hearing crazy west winds screaming above their heads and the lack of daylight remaining after the mile long slog and establishing camp and all, they were deterred from going for Jefferson that day as they had originally planned to do.

They wisely decided to stay in camp and enjoy their time staying warm performing various camp chores, boiling water, cooking, etc. Álvaro took over making dinner for the two of them bringing fresh ingredients for some fine Portuguese comfort food. This is why guests-in-the-know request Álvaro. You just can’t get this kind of special treatment anyplace else. 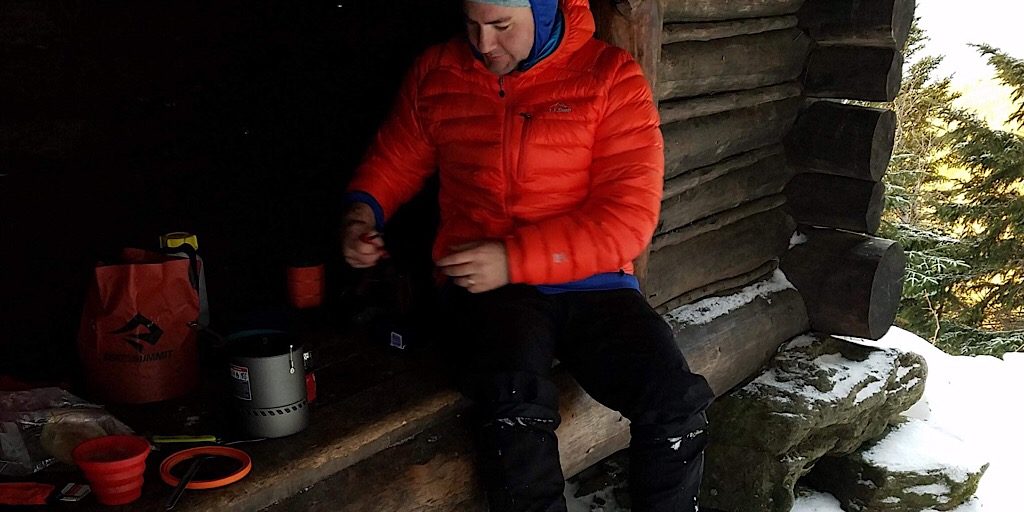 Camp life is all about living. 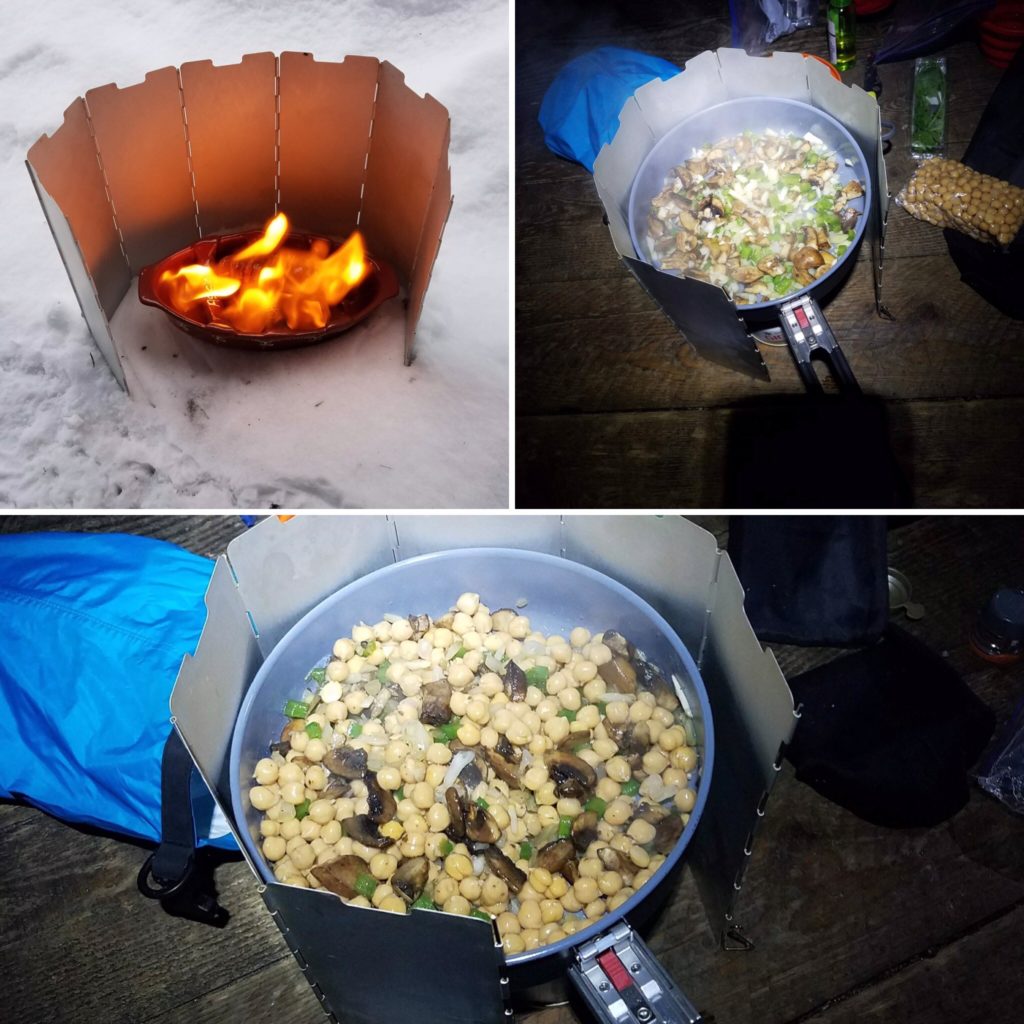 Our guests love Álvaro and his home cooking with fresh ingredients! Upper left is a special ceramic Portuguese chorizo cooker! 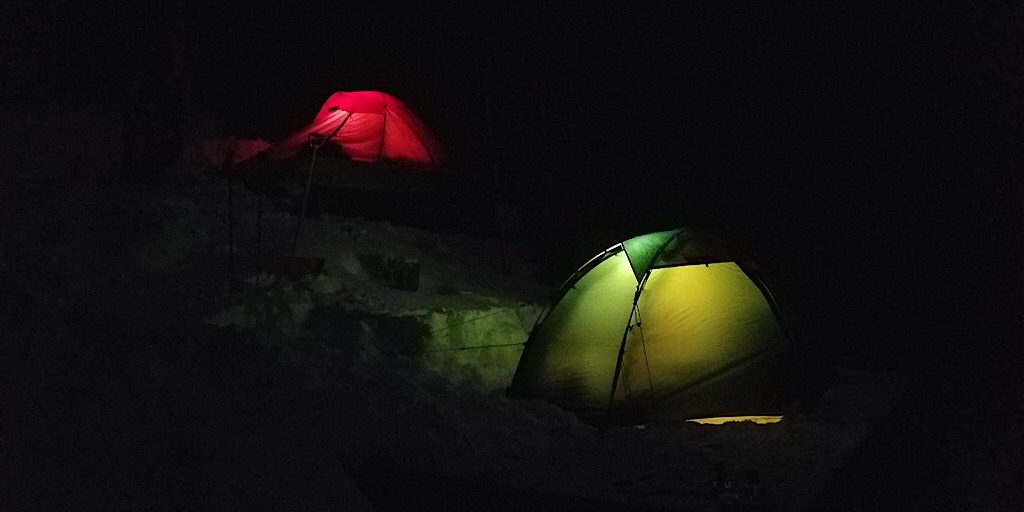 Good night. Sleep tight. (This could be a Hilleberg Tent advertisement.)

After dinner and an uneventful night in camp the two awoke early to a brief sunrise and stunning but limited undercast before being swallowed by clouds for the bulk of the day. After a simple in-bag breakfast the two packed their gear and headed above treeline for the remainder of their hike. Things started clear but before long visibility was pretty limited. Moreover there was a fair amount of rime ice creating a lack of contrast making navigation more of a challenge at times. This is especially problematic on Adams with its small cairns (Madison usually isn’t an issue at all). Thankfully Álvaro had been up there many times and was able to guide Woody and himself safely to the top without much difficulty. 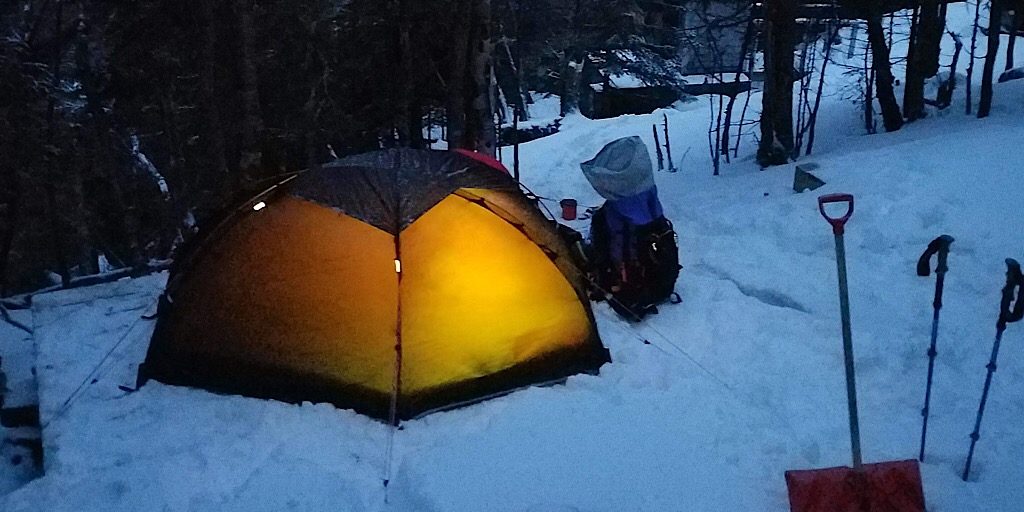 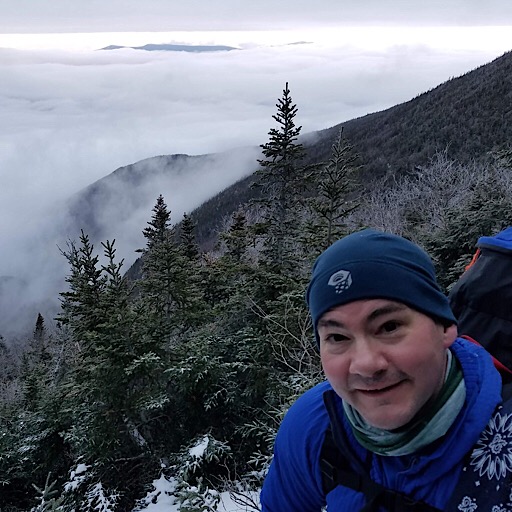 And they’re off. Visibility is still good. 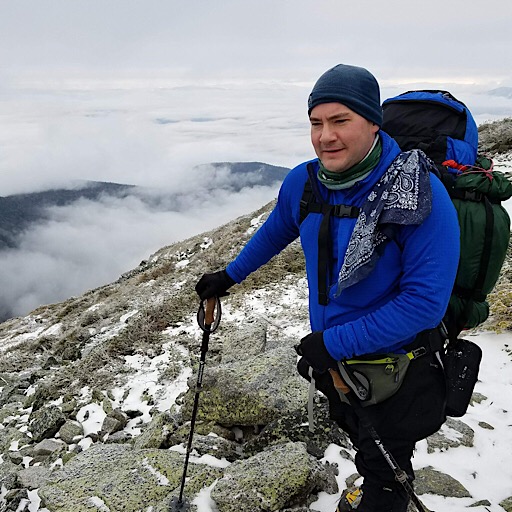 Soon they are in the alpine zone. 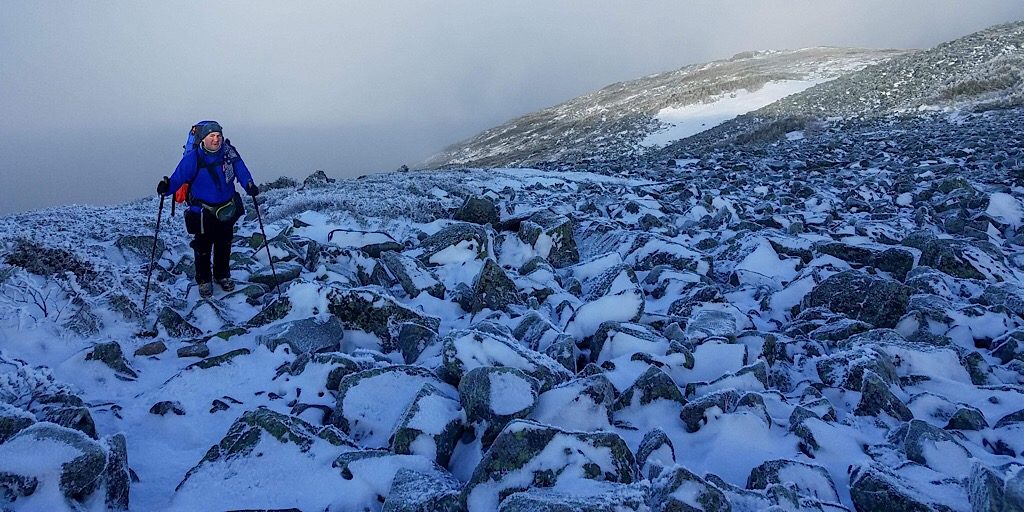 The alpine zone is an unforgiving but stunningly beautiful place. 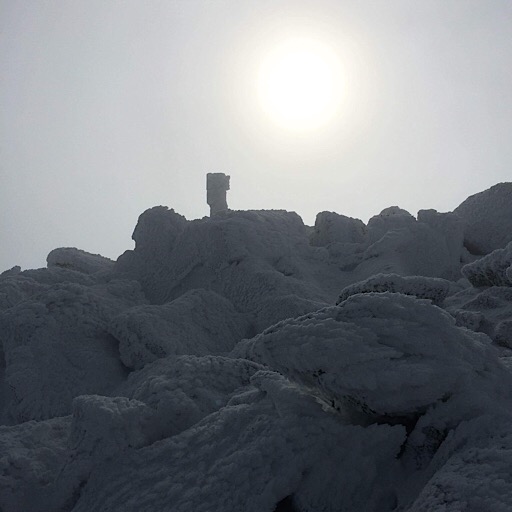 Visibility could be better. 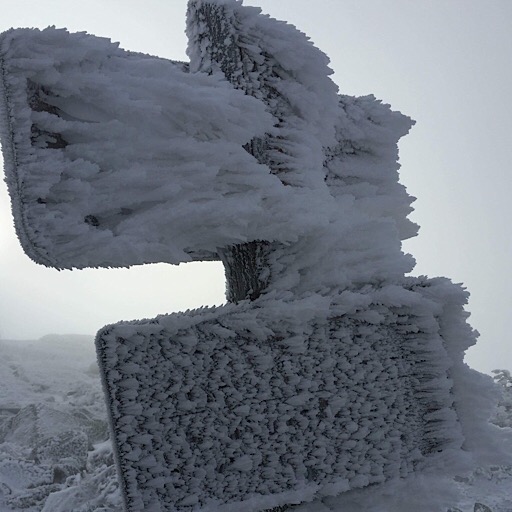 Rime ice on the signs. 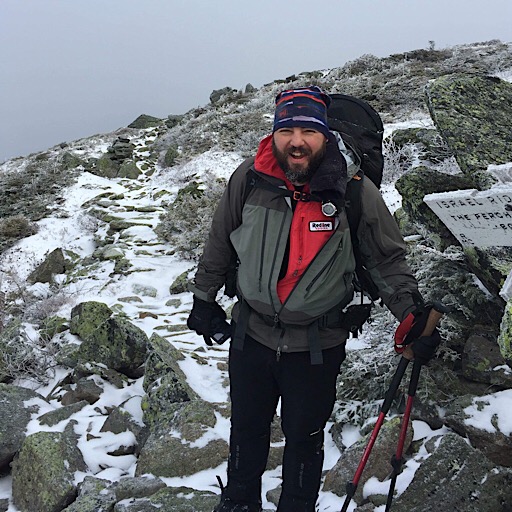 Better than a job with the DMV, yeah? 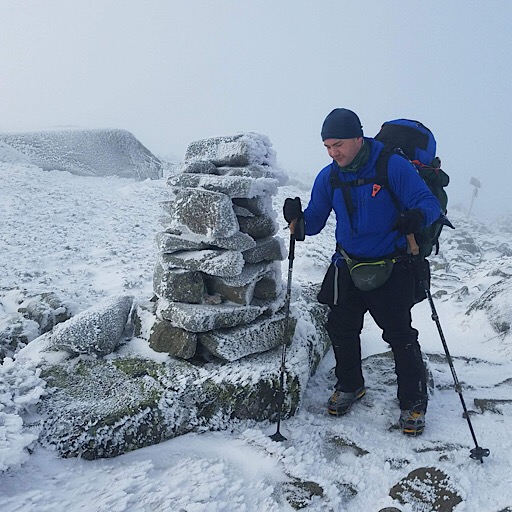 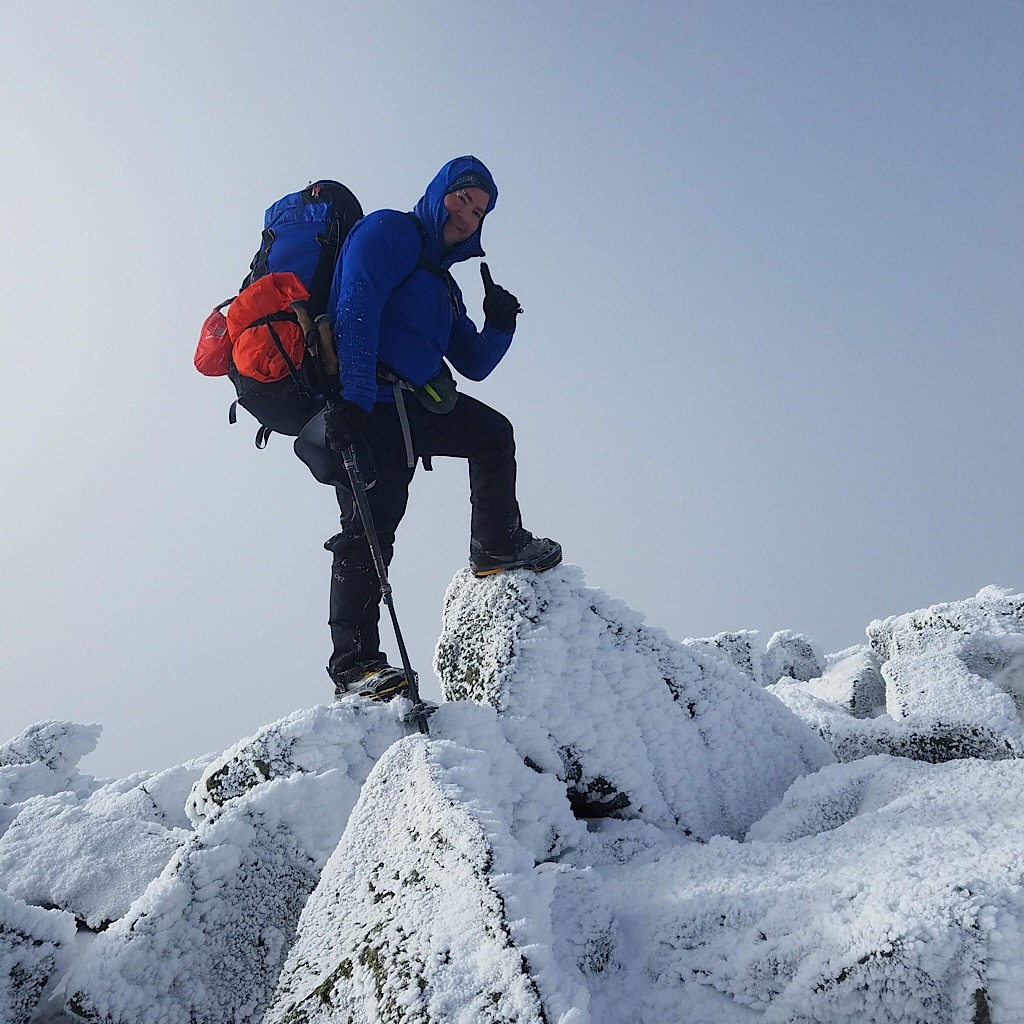 After spending some time on Adams in cloudy but extremely calm, comfortable conditions, the pair headed down toward the Madison Spring Hut for a short break before making their final summit push: a half mile to the Madison summit. After tagging that peak and returning to the closed hut, Álvaro and Woody headed down Valley Way Trail to the Appalachia Trailhead and their awaiting carspot. This last part went very quickly since the trail was in great shape and both hikers were still feeling good. 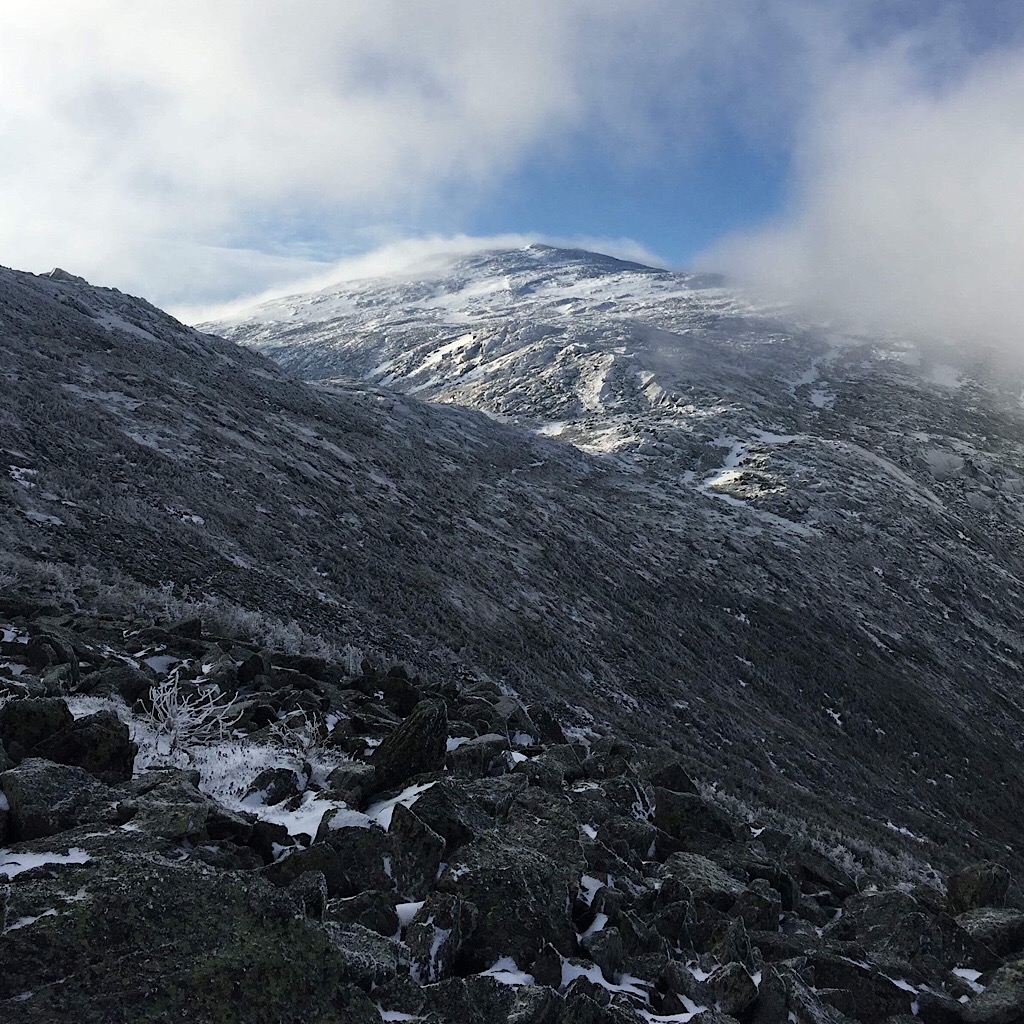 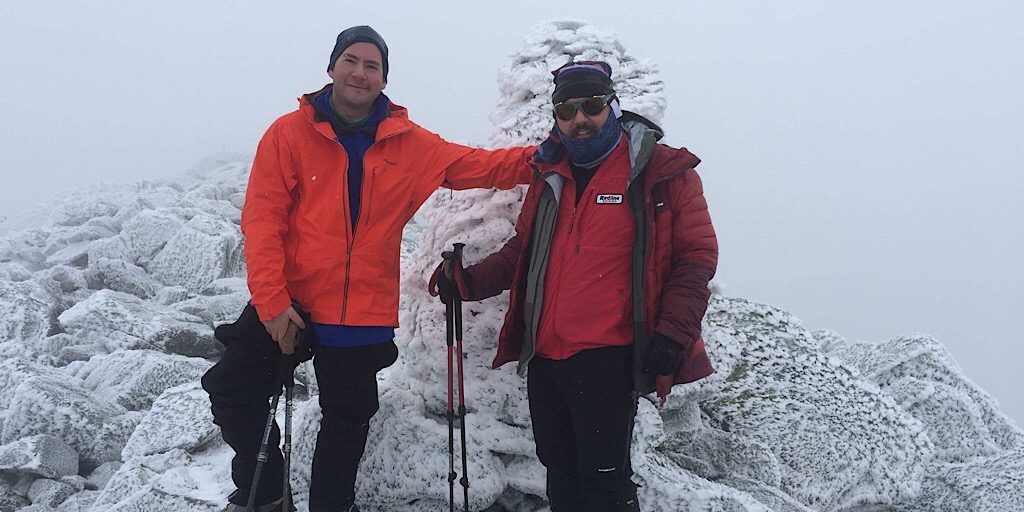 Final summit of the day. 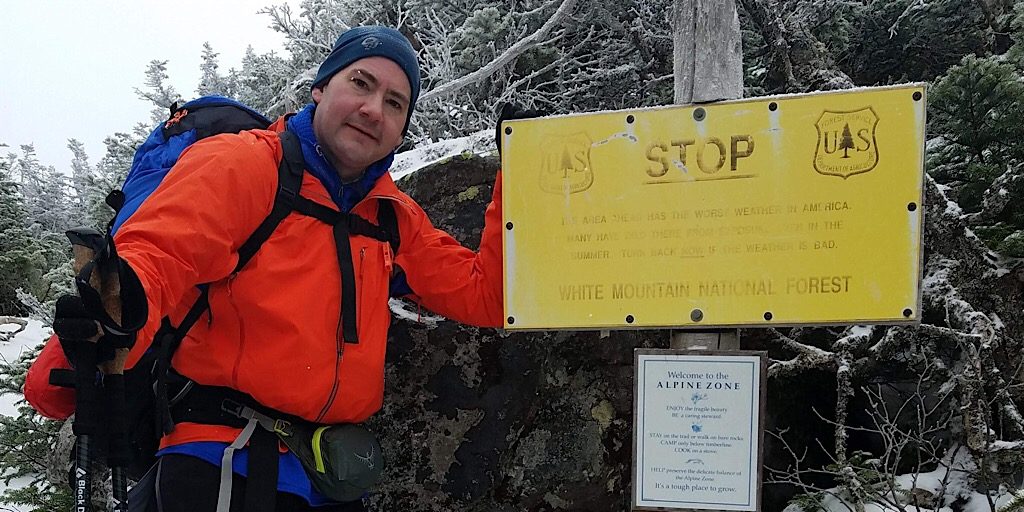 A serious sign worth noting when hiking up here. 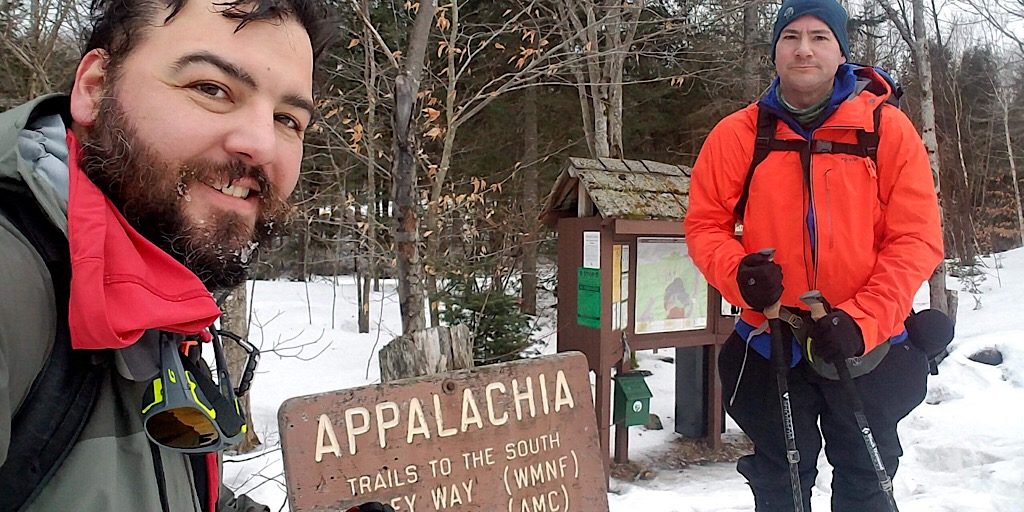 Only at the parking lot is the day truly a success.

Next time, there will be *guaranteed views (*disclaimer: sorry, we can’t actually do that). For now, well done, gentlemen. Woody, congratulations on getting two of the three. And Álvaro, that was a fine lead with some solid planning and decision making. Good job! For those who don’t realize it, this phase of our trips starts well in advance and we labor over it.