How I Died Hiking

THIS work of fiction isn’t meant to be shocking or morbid. That said, some might find it disturbing on some level, or chilling. That isn’t, however, its purpose. Nor is it meant to point out any glaring errors or huge lapses in judgement. You’ll find, in fact, that this could really happen to anyone. It can creep up on us, one moment an innocuous experience, the next something more. The scariest part — and this is no “alternative fact” — is that no matter how much we know, if we lose it upstairs, if we can no longer reason, the downward spiral can be swift and irreversible without intervention. That is this story’s purpose. 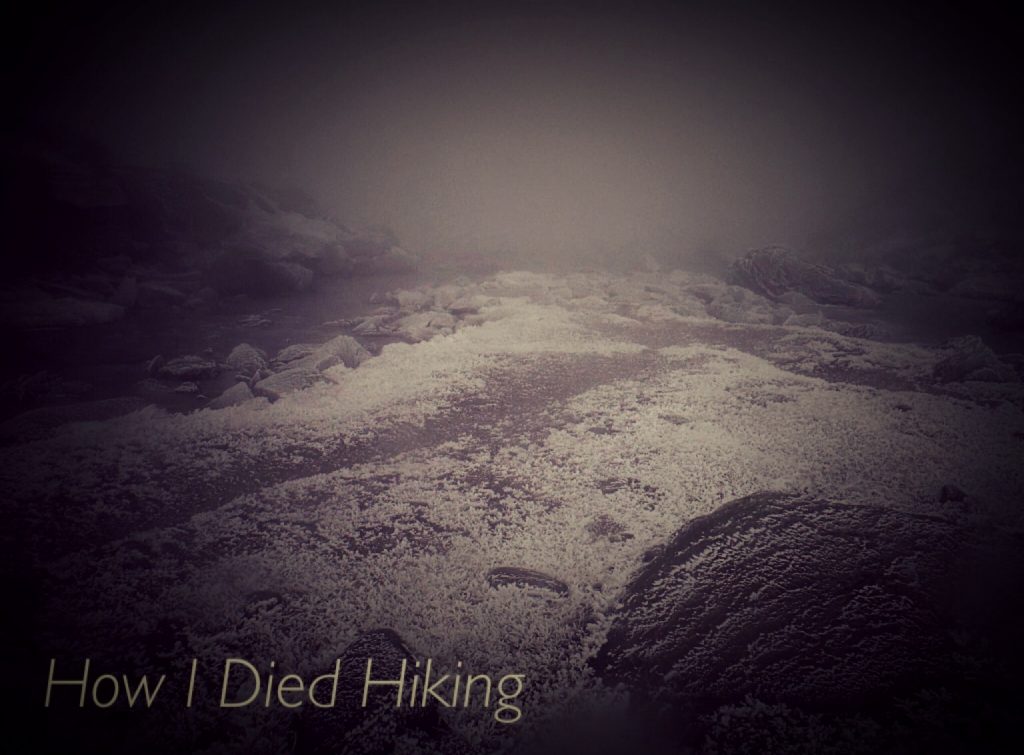 The day began on the warm side. Light winds and clear skies were noted on the 4:50am summit report. The forecast told of increasing winds and dropping temperatures, courtesy of a front also possibly bringing snow squalls or freezing rain late in the afternoon or early evening. Being a fast hiker, I figured I’d be up and back well before any of that nastiness rolled in.

I was going to go do this with a buddy of mine, but he ended up fighting a bug, according to a text he sent at 3:00am. I was on my own. No big deal. I’ve gone on so many winter hikes I’ve lost count. I may be from out of state, but it is no reflection on my ability. I green-lighted my trip without giving it a second thought. After a quick breakfast, I hopped in my car and made for the mountains. “The mountains are calling and I must go,” I posted to my friends on Facebook in the wee hours of the morning.

Before I knew it the soul-sucking, mind-numbing drive was over and I was on trail. It was nice. I was cruising up the mountain taking it in big strides. Since the forecast for the better part of the day was decent, I didn’t bring my really heavy gear so that allowed me to hike a little faster. Bear in mind, I’m experienced and didn’t head out without the essentials, I just didn’t bring the really heavy stuff like my big parka, pad, or sleeping bag.

The temps were unseasonably warm and I began to sweat. I knew better than to sweat out my clothing too much so I de-layered. I could have slowed my pace, too, but I wanted to be off the mountain by early afternoon so I got down to my base layer and continued on. The effort paid off. Before long I was in the krummholz zone at treeline and putting a layer back on thanks to the winds. Apparently they were building more quickly than expected. I couldn’t see to the west yet, but based on the winds I expected the front was coming through earlier than forecast. Mountain weather can be unpredictable at times.

Within a half mile of my last position the winds had picked up and the sun had become a dim, gray lightbulb. The clouds were descending. I loved it, actually. I was having a great day. I had the mountain to myself, it seemed. Not many people took the route I did so that added to my feeling of solitude. It was a bummer my buddy couldn’t make it, but I was far from unhappy. I was in my happy place, after all.

I finally made it to the ridge and could see westward… except, well, I couldn’t. The clouds from the west had made it to the ridge at the same time I did, it seemed, so I found myself wrapped in a wet blanket of gray and white mist. I donned my hardshells. The temperatures were dropping, as forecast, and soon I found myself shrouded in ice. My hood became a helmet, my trekking poles like two thickening limbs. I’d been in worse and decided to press on. I was close to the summit and I had done this so many times before. I barely gave it a second thought.

It didn’t take me long. The winds were picking up, nailing me from my left side on the way up — and would be on my right on the way down — but I was able to stand on the summit in my ice suit. I was rocked by a gust, and it took me aback for a second, but this was grand. Woooooo-hooooo, I shouted. I was slammed by another gust and decided enough was enough. I retreated from the summit and retraced my steps back down the mountain.

The front came in early that’s for sure, and the wind not only grew in intensity, but it shifted direction, albeit just slightly. This wasn’t in the forecast but mountain weather will always be fun like that. Now it was in my face more so I altered my angle of descent slightly so I could see better. My goggles were able to do their job. I was heavy with ice but the wind still tried to pick me up and set me down at times. My poles helped a lot doing their job as well. Having altered my course some I found myself off the regular boot pack and into some softer snow. I postholed a few times in unseen spaces between the rocks but I was making it okay. It was a little tiring and tedious.

The biggest problem with the uneasy footing was that it was coupled with gusting winds. The winds were wet and heavy with ice and the gusts violent and unpredictable. At this point the grandness of it all was diminished and I just wanted to get down below treeline. I had about a mile and change to go. Normally I’d cover that distance of descent plunge-stepping down the mountain in about ten to fifteen minutes. I was thinking about this very thing when it happened.

A gust caught me off guard and sent me to my knees — one of them, my right, struck a rock. I cursed. I knew I had injured my knee. I tried to get up and managed to do so but I was in severe pain. Not only was I slowed by the weather, ground conditions, and visibility, I was now favoring a painful knee. No speed records would be broken on this descent. I was making it, though. Hobbling. Meanwhile, in the world above treeline, the winds continued to gain in intensity and the temperature was dropping like a rock. I was getting chilled having slowed my pace. My mind wandered. I thought of my big parka, back in my closet. I continued to descend.

A sudden gust twisted my body causing me more knee pain snapping me out of my daydream. I was so laden with ice, and I couldn’t seem to be rid of it. I was getting tired and cold. It was raw. Always thinking — still thinking, thankfully — I had a snack close at hand and managed to take a few bites of a dense, nearly frozen powerbar. It was amazing as it thawed in my mouth. A sorely needed transformation occurred and I felt a surge of energy. I continued on shouldering the wind, stronger, and feeling slightly warmer. I re-acquired the boot pack. This would be no problem, despite my knee.

I was doing okay but the falling temps and increasing winds intensified the challenge. The precipitation changed from freezing rain to heavy snow and it blew everywhere making visibility even worse. I was still on the boot pack and not fearful of getting lost (plus, I could use my compass if I needed to) but I was mindful of my painful knee and difficult walking conditions. I continued on using up the last of my powerbar buzz and once again found myself thinking of my parka. I was getting cold again.

I stumbled. A gust caught me off guard and a crampon nicked my hardshells above the gaiter as I high stepped around a rock, and in doing so I tweaked my knee again. I sounded out but the wind carried my cries away so quickly they weren’t audible, even to myself. That’s when another sudden gust hit me and sent me down hard bending my trekking pole in the process. I landed on my effing knee! This time whatever damage I did the in the first blow was complete. My patella was in pieces. I was injured to the point that I was no longer able to remain upright or mobile. The pain was relentless.

Where the hell is everybody today?! I crawled along on the ice and snow for what seems like hours, my tears freezing to my face. I knew I was in trouble. Not dead yet, no impending doom, not even thinking that way, yet, but this was not only no longer fun, I was getting pretty worried. This could end bad… nah, I couldn’t believe that, not really.

I didn’t get far. I was shivering. I needed to find cover. My mind was still working. I thought so, anyway. I told myself I be therefore I think I am… I am Sam, Sam I am… green eggs and… what the ham?! So muddled. I was losing it. Crawl to the krummholz, I tell myself. I make it. I take off my pack and dig out all my layers with a strange nearly silent laugh. My fingers won’t cooperate as much as I’d like them to. Everything takes so long. I fumble for my light puffy and my clavibala, baliclove or whatever. This sucks! I can’t get it on. I struggle in the krummholz. My hood comes off. Was it even on? I shiver so hard it hurts. Then that subsides. I begin to think I’m screwed. Some snow falls down my back. F—k!

It’s nice here in the krummholz. Not as bad as being out there in the wind. I didn’t bring my pad but I have put myself in my pack a bit and I’m sitting on my gear trying to stay off the ground. I am clinking thearly. I wish I had brought my big parka. I keep daydreaming about it. The snow that fell down my back melted. I want to eat some snow but I need to wait a little to warm up. I eat some anyway. Sooooo good. I have some more. My knee doesn’t hurt any more, I don’t think so, anyway, but my pants are bloody. It’s really nice in here. I bet dandelions grow here in the summer. It feels like summer. My mind wanders.

Somehow I nod off but wake up again, this time feeling nothing, yet feeling incredibly stiff. I no longer feel cold. I want to take off my puffy but somehow it’s already off. I then decide to put it on but I don’t move. I forgot, I’m not cold anymore. It’s so confusing. I just sit there… in my happy place.

I nod off again, thinking about parkas and dandelions. Maybe. I don’t know that I am thinking. Maybe I’m not thinking. Maybe I just am. Then maybe, I wonder, if even that’s true. Day becomes night. Time moves on. I slip away into the alpine zone.

“He died doing what he loved,” they said.

Note: A reprint of this story also appears the Winter/Spring 2018 issue of the AMC’s Appalachia Journal.